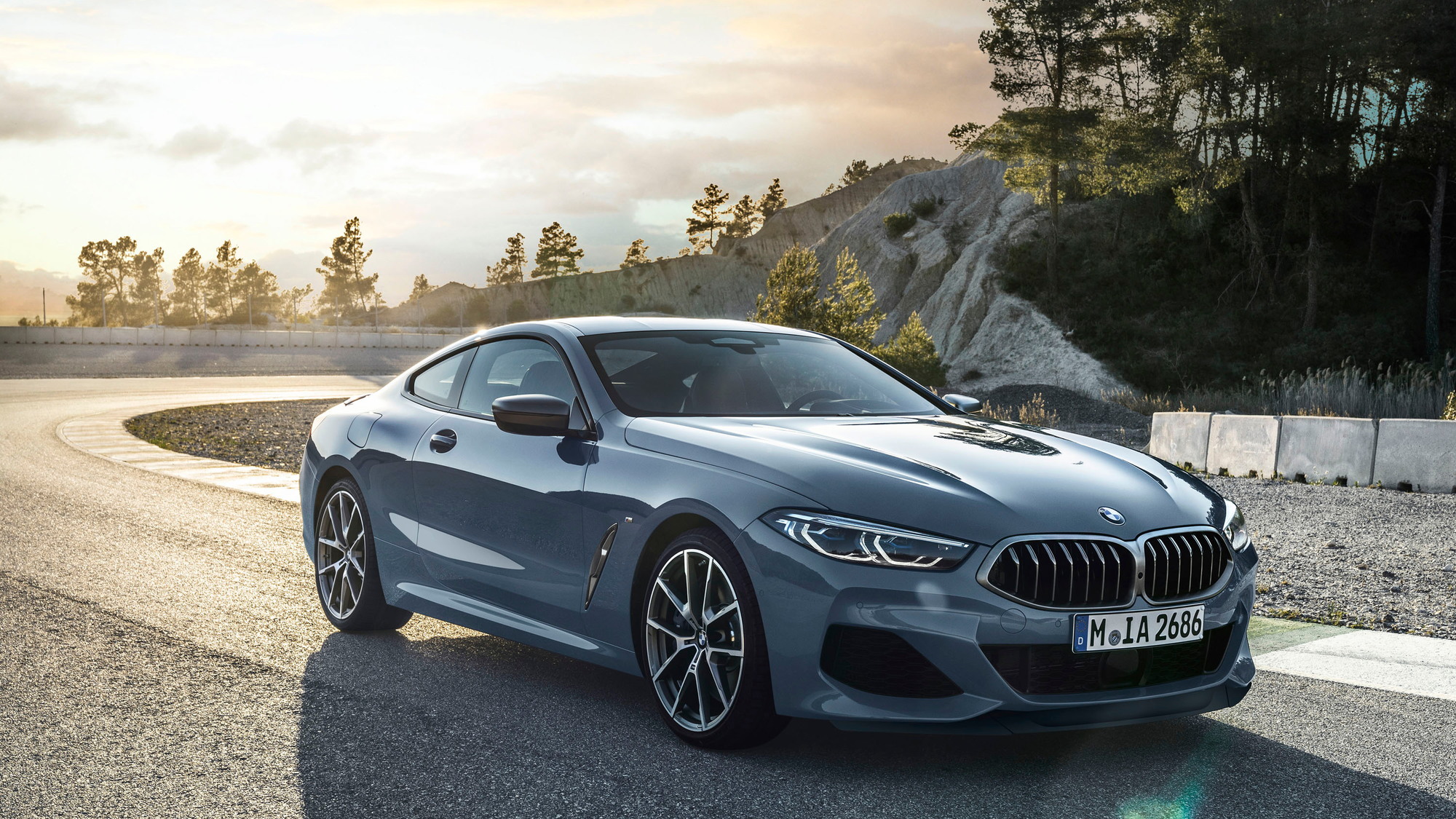 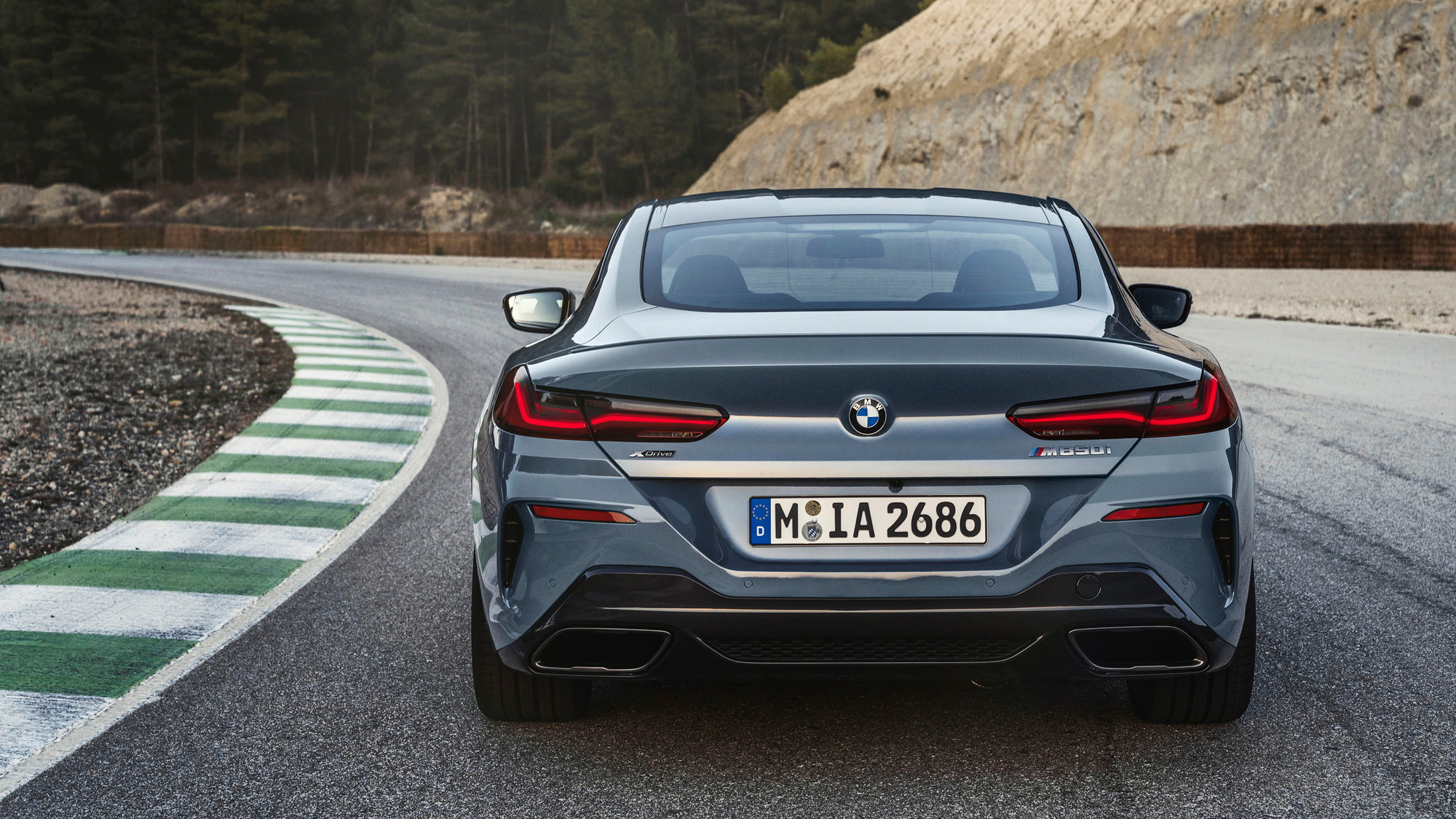 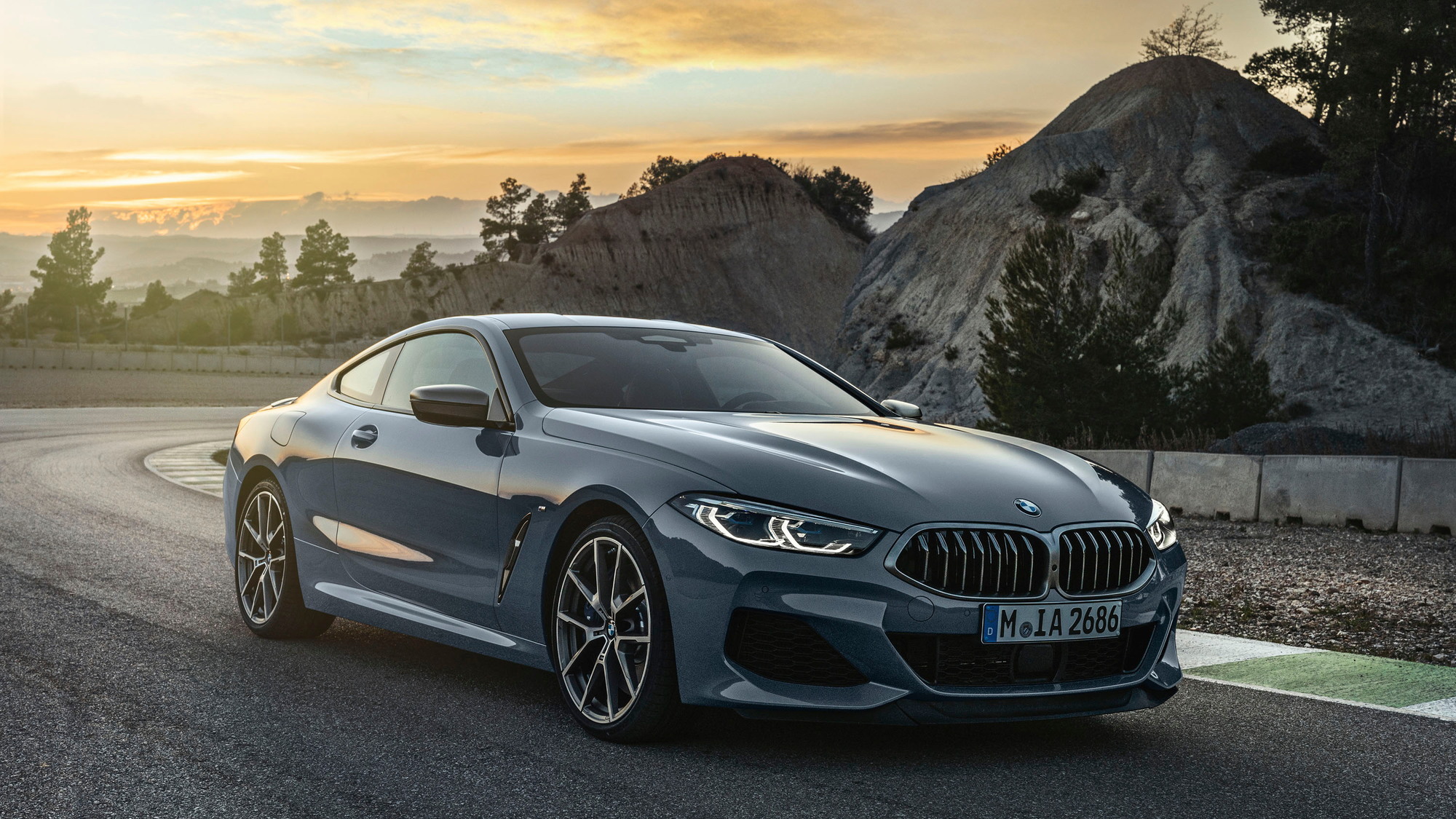 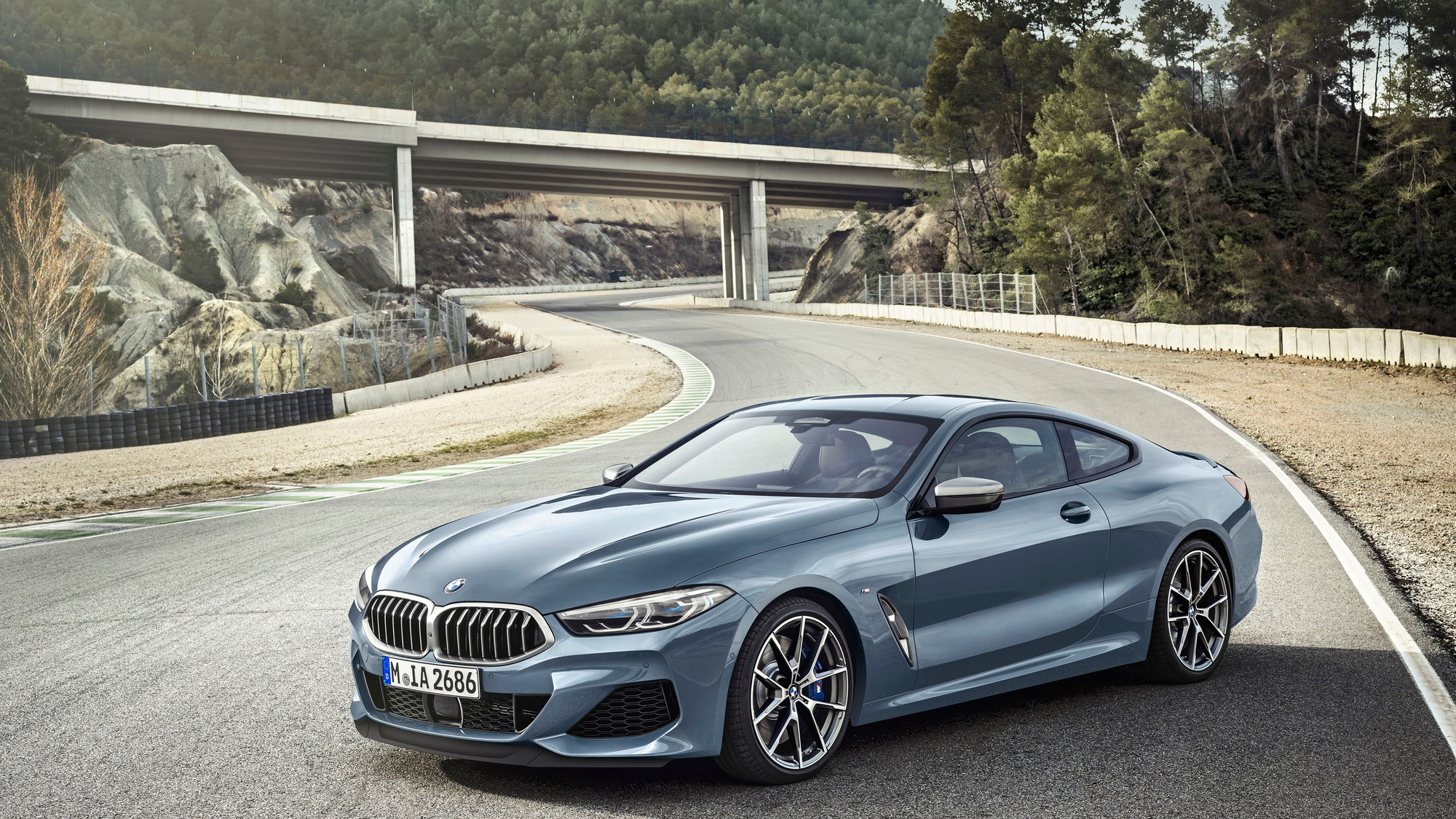 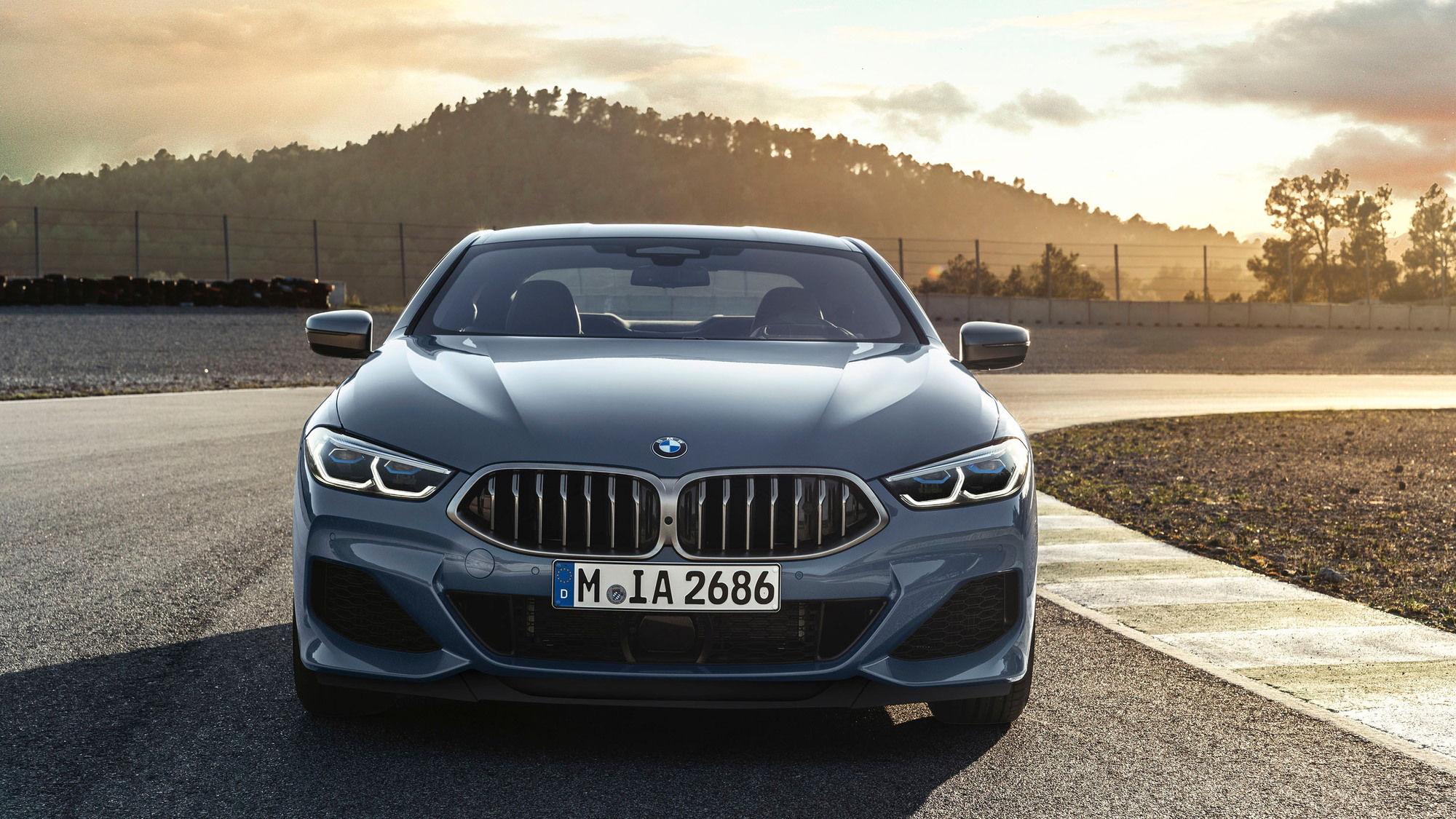 46
photos
After 20 years, the BMW 8-Series is officially making its return. BMW showed the 2019 M850i xDrive luxury coupe on the sidelines of the 24 Hours of LeMans Friday where its sibling, the BMW M8 GTE race car, will compete in the FIA World Endurance Championship.

The 8-Series moniker denotes that the car sits at the top of the model line, and it will be built in the same Dingolfing plant in Germany as the 7-Series sedan. At launch, which is set for this fall, the car will come in one model called M850i xDrive.

For best aerodynamics, the underbody is almost completely covered, the grille has shutters, and the car has active air curtains.

Power will come from a new generation of BMW's twin-turbocharged 4.4-liter V-8, here making 523 horsepower and 553 pound-feet of torque. That's good for a 0-60 mph run of just 3.6 seconds, and we're not even talking about an M8 yet.

Updates to the powerplant include larger turbos, a new aluminum alloy that increases the strength of the engine block, intake ports optimized for higher flow, and a direct-injection system that ups its pressure from 2,900 to 5,076 psi. A viscous damper on the crankshaft also improves engine smoothness.

The V-8 will sing its tune through an a sport exhaust system with adjustable flaps, and that tune can be adjusted to be loud or subdued based on the chosen drive mode. The Eco mode enables a sailing function that decouples the engine when the driver lets off the throttle between 9 and 99 mph.

The lone transmission is a sport version of BMW's 8-speed automatic with standard steering wheel shift paddles. The power flows to all four wheels via a rear-biased all-wheel-drive system. A rear differential lock is standard, and so is a Launch Control feature.

BMW says its goal was to provide a thrilling driving experience that combines agility and poise. With this in mind, engineers designed the double-wishbone front suspension and five-link rear suspension specifically for the 8-Series. They also outfitted the car with the M Adaptive Suspension, which features adaptive dampers that adjust continuously and independently, and standard Integral Active Steering with a variable steering ratio and rear-axle steering that can steer the rear wheels up to 2.5 degrees opposite of the fronts to virtually shorten the wheelbase. An optional front and rear active roll bar system provides a flatter attitude through turns.

To keep heft to a minimum, much of the structure is made from aluminum, as are the roof, doors, and hood. The front axle is almost all aluminum as well, while the roof and other aero bits can be ordered in carbon fiber. Still, total weight comes in at a rather hefty 4,478 pounds.

Inside, it's standard BMW fare, though to the highest levels of craftsmanship. Merino leather-clad M sport seats are standard, and contrasting stitching is found throughout the cabin. An M steering wheel, M pedals, a dark anthracite headliner, and illuminated door sills are also part of the package. BMW's iDrive controller sits in its usual spot, and the drive modes are chosen via the Driving Experience Control system. The back seat promises to be tight, especially in terms of head room.

The base audio system is a 16-speaker Harman Kardon system, and the top choice is a 16-speaker, 1,375-watt Bowers & Wilkins Diamond Surround Sound System.

Pricing and additional models have not been announced. Look for that information closer to launch this fall.