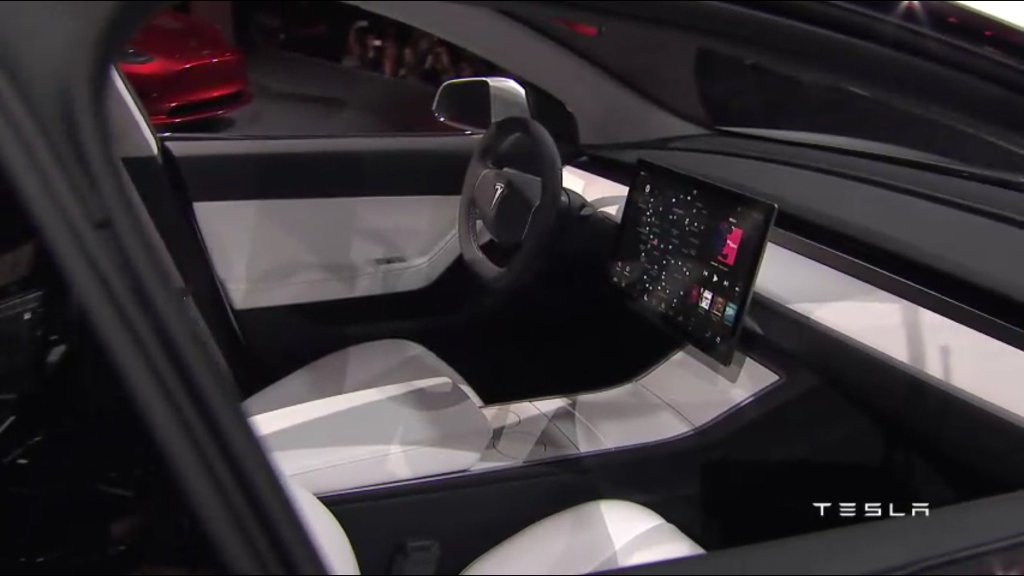 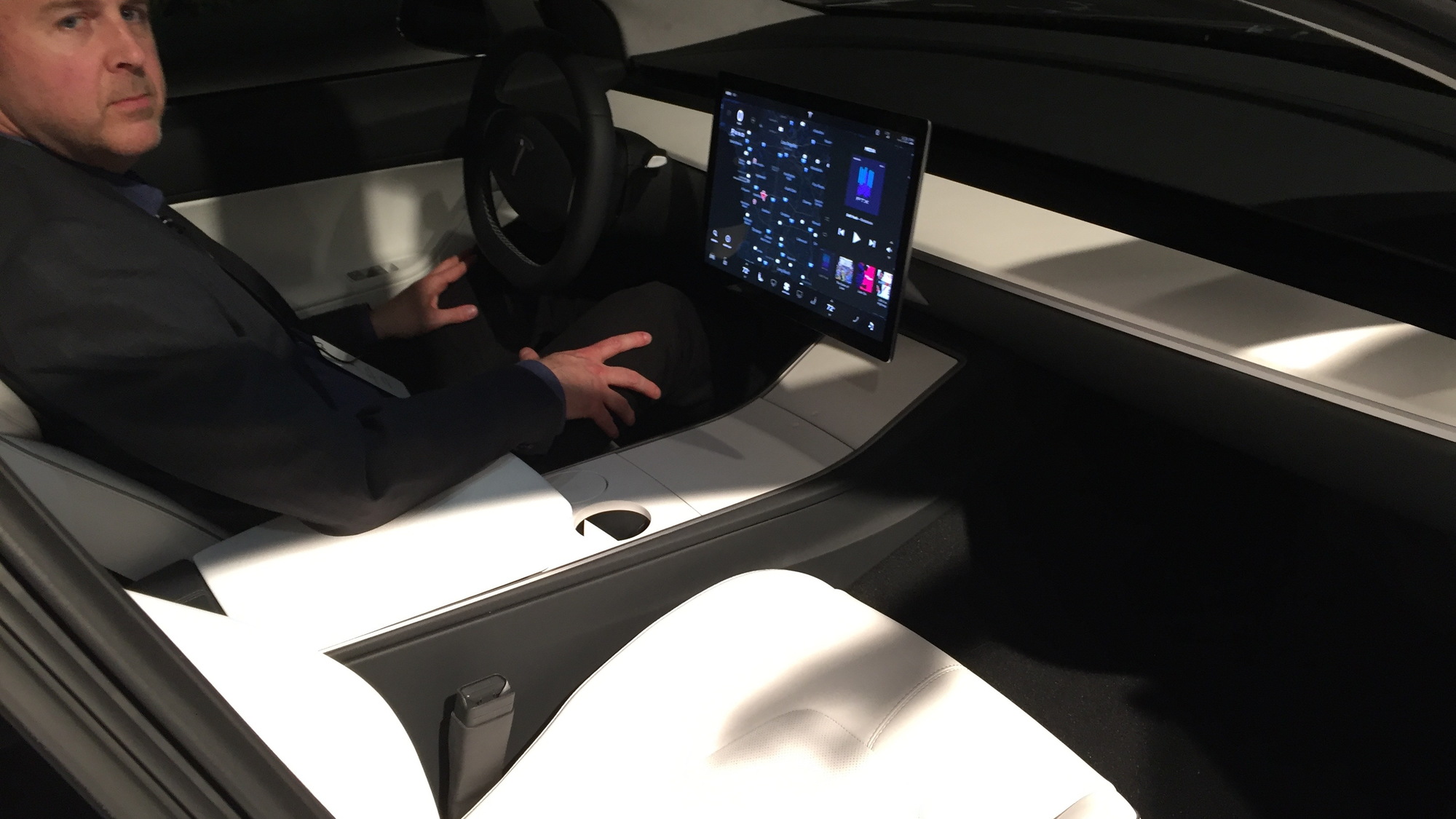 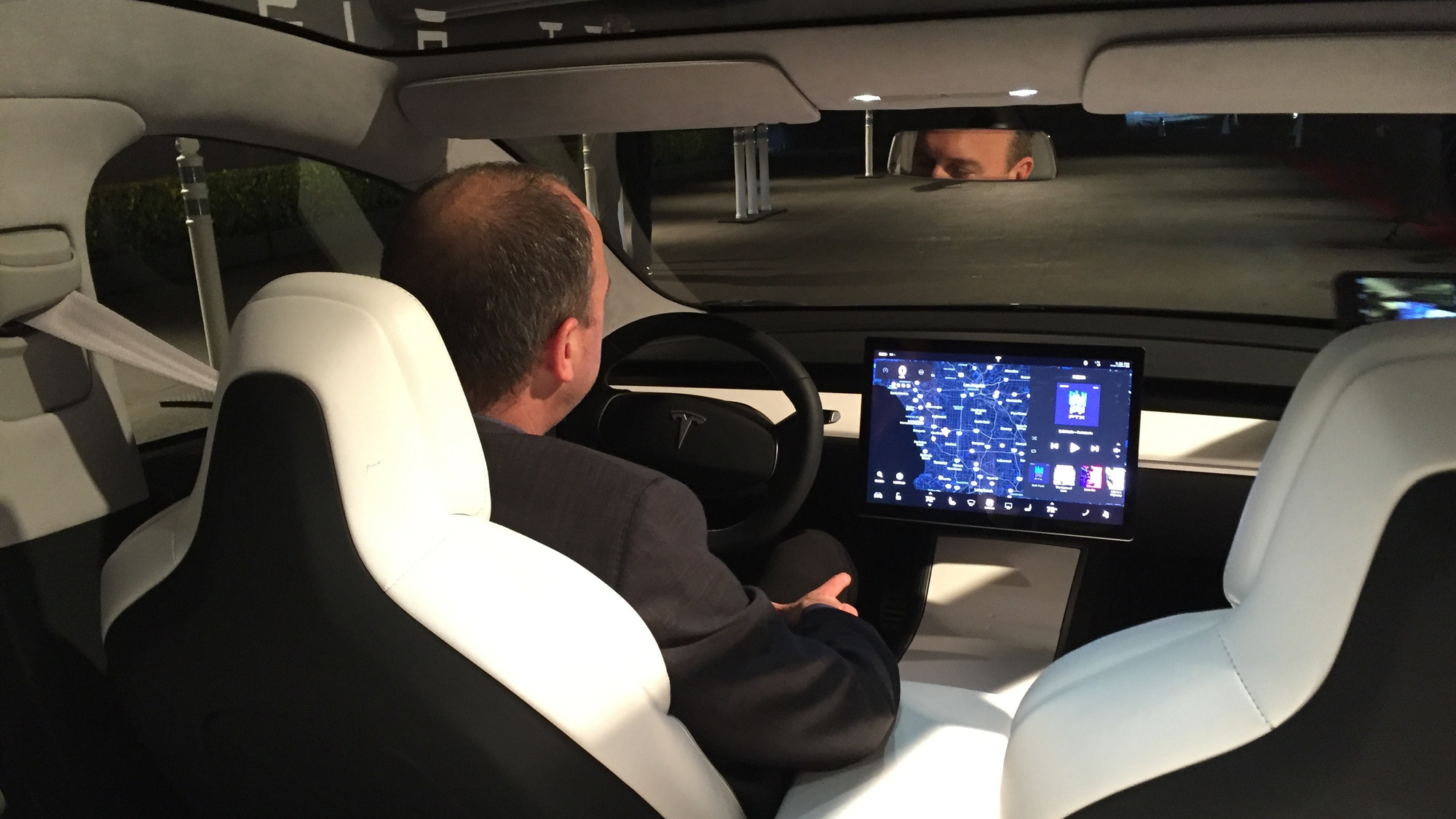 The excitement surrounding the upcoming Tesla Motors [NSDQ:TSLA] Model 3 electric sedan is, well, electric. The Silicon Valley automaker started taking pre-orders for its next electric vehicle last Thursday, and there are likely well over 300,000 already placed by this time.

The inside of the Model 3s shown last week featured no gauge cluster, no head-up display, no buttons on the dashboard, a funky two-spoke steering wheel, and a single 15-inch horizontal tablet-like touchscreen. It makes for a unique look, but it appears that we haven't seen the Model 3's actual interior yet.

The cars we saw certainly didn't have a typical dashboard. The speed is displayed in the upper left-hand corner of that massive screen, and basically all controls are executed via that massive touchscreen interface. But the final interior could be even more futuristic.

Tesla said it all plays into how it views the future of driving, and how you'll interact with your car. Specifically in terms of its Autopilot technology, aka self-driving cars.

Because, you know, in the near future we aren't even going to drive vehicles anymore. We are going to just be passengers and watch movies while the vehicle shuttles us to our destinations.

People took to Twitter to comment on the weird steering wheel and lack of a gauge cluster or HUD. Company CEO Elon Musk responded, and had some interesting words regarding what we saw last week. Among those words were, "that's not the real steering system."

@HBL_Cosmin Wait until you see the real steering controls and system for the 3. It feels like a spaceship.

This seems weird as the engineers giving auto journalists (including us) rides in Model 3s last week said they were basically representative of what we'll see when it launches. Suddenly, this almost feels like a game of Who's On First.

Jalopnik notes that most automakers talk about how a vehicle isn't representative of the production model, or how it's just a prototype. Nope, not Elon. As you can see in his tweets, he's using words that are much stronger, like "not real."

Musk has already said that last week's press conference was simply part one of the Model 3 reveal, and we'll learn much more in part two.

Ah, the slow drip tease reveal tactic. One might assume this is necessary because the car definitely won't hit the streets until late next year. And, given Tesla's track record when it comes to product launches, it could realistically be two full years, or more.

Time will tell. Stay tuned for more information as we receive it regarding the Model 3.