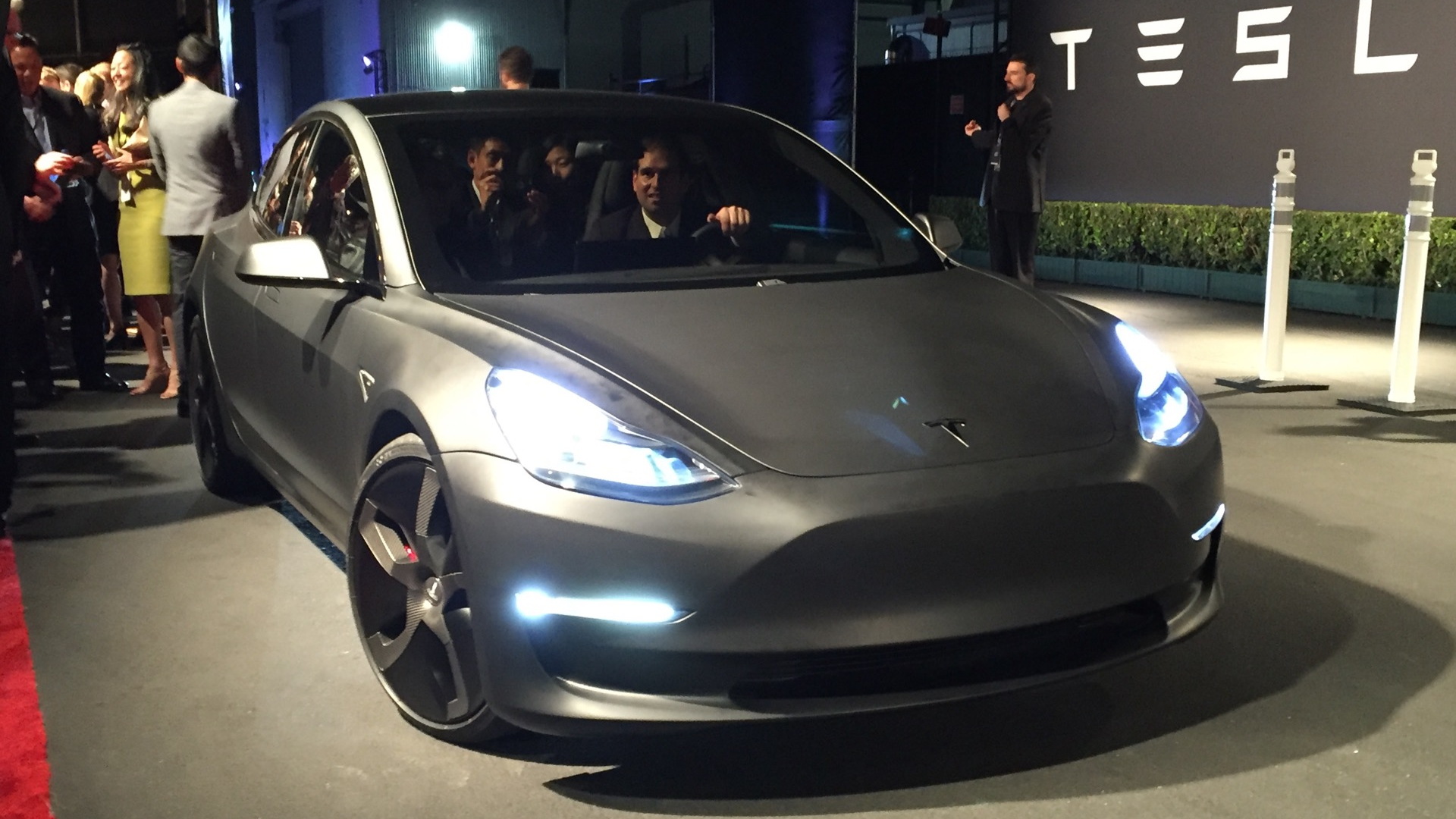 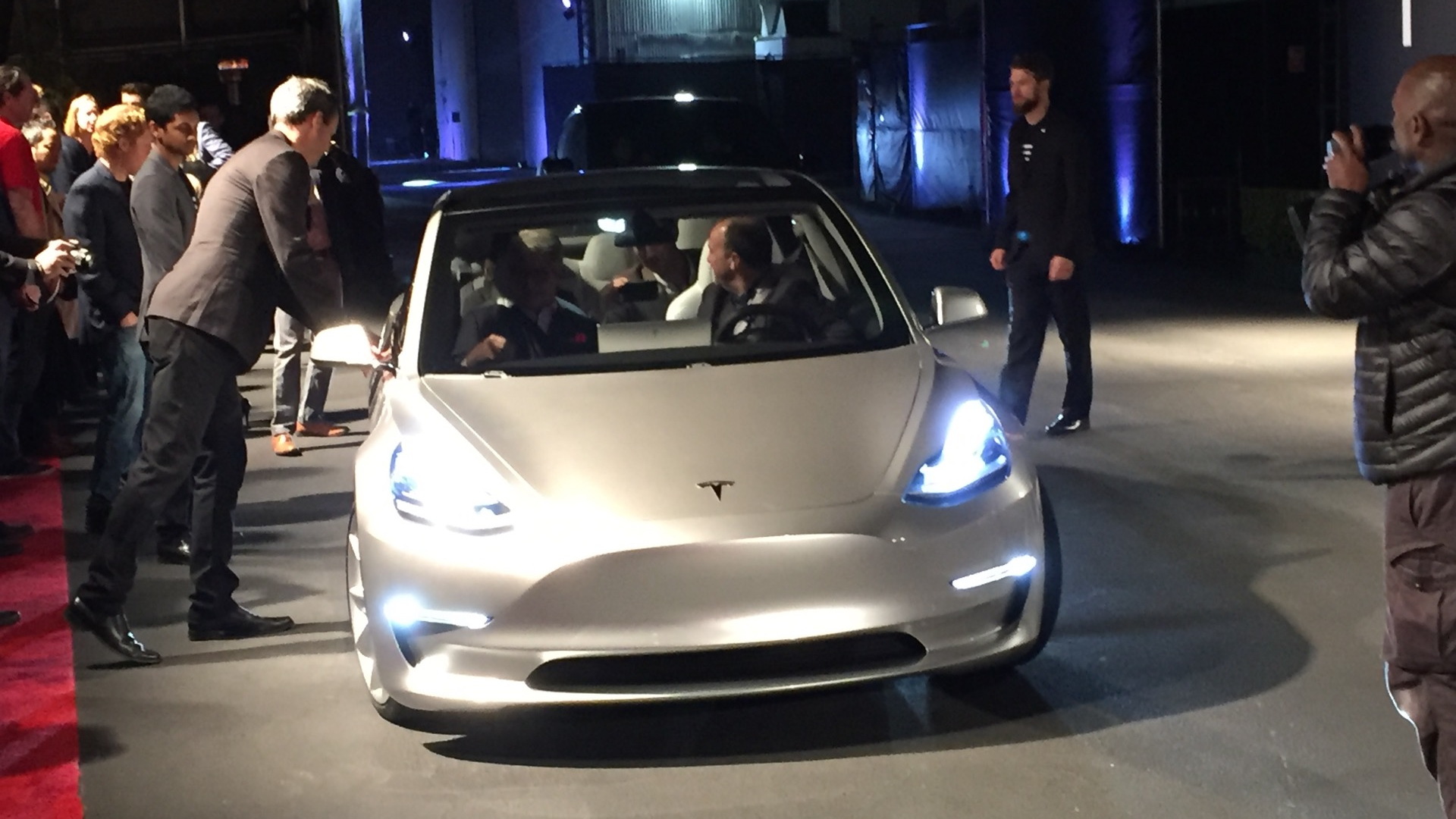 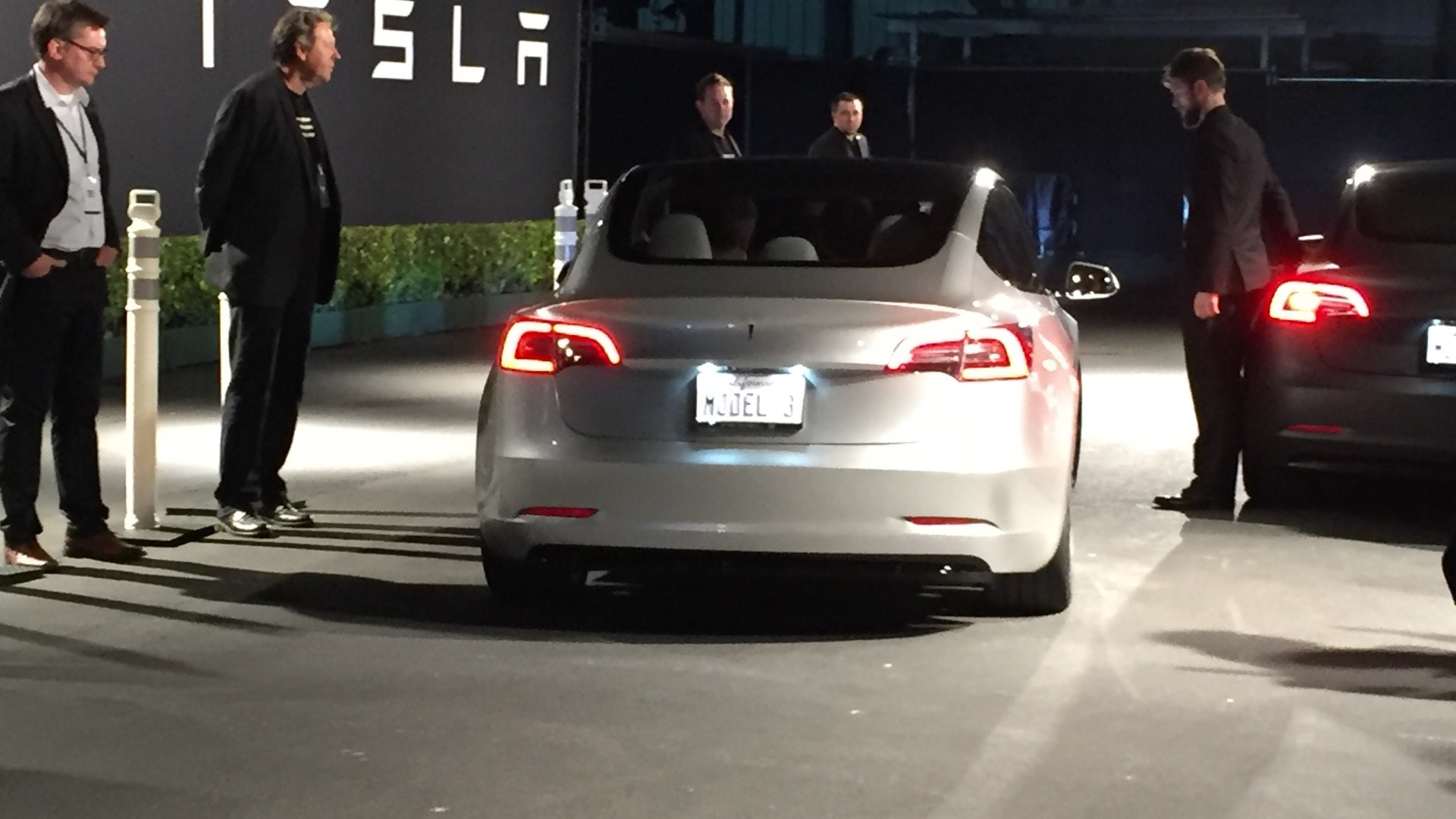 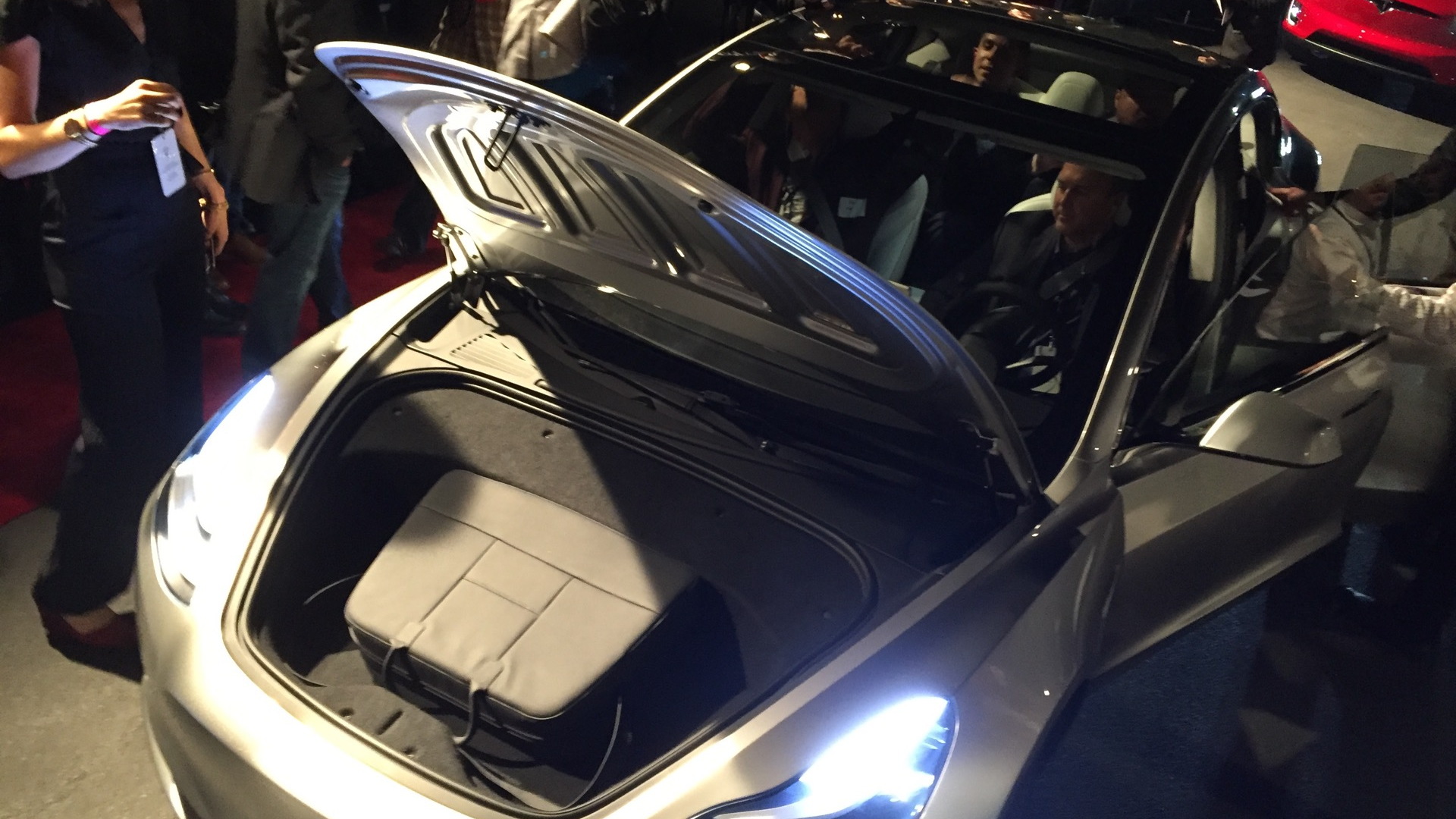 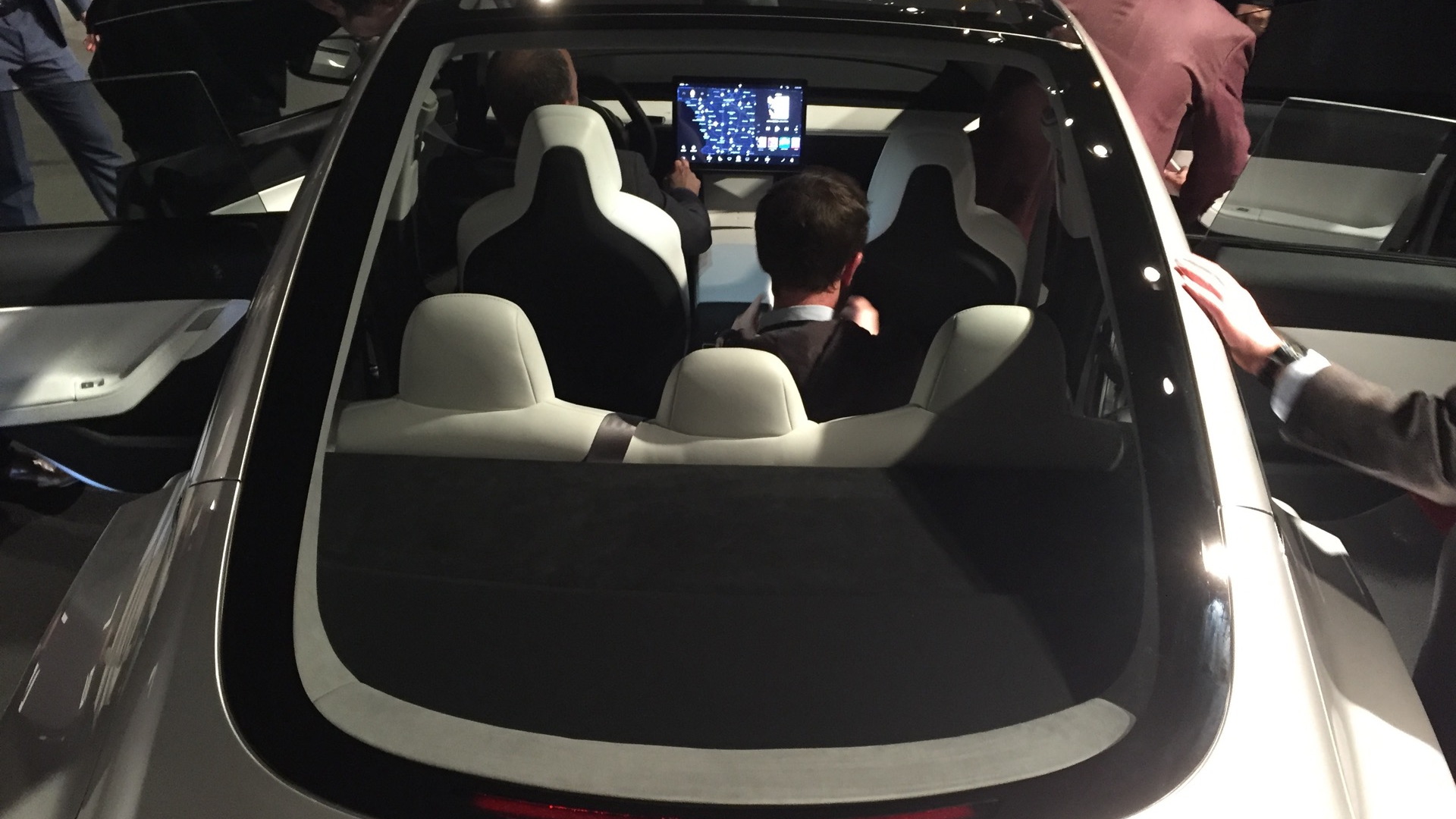 Shortly after the reveal we also received a quick ride in the car. While Tesla only had pre-production models on hand, the cars were said to be representative of the production model due late next year.

That means the single, square-shaped touchscreen in the center of the dash will be a mainstay in the production Model 3. The screen, which measures 15 inches across, displays all vital info and handles most of the driver input functions. For example, top speed is displayed in the top left-hand corner.

There’s plenty of visibility thanks to the full glass roof, which like the arching windscreen of the Model X features protective layers to block out heat from the sun and keep occupants cool.

And there’s plenty of space in the Model 3 thanks to nifty design traits like the compressed dash which allowed Tesla to position the front seats further forward than normal.

Judging by the seat of our pants, acceleration was strong once the driver dropped the loud pedal. Tesla didn’t reveal many specs but said the base Model 3 will be capable of hitting 60 mph from rest in 6.0 seconds or less. The base model was also confirmed to have at least 215 miles of electric range, as measured by the EPA, plus a starting price of $35,000 before incentives.

The quality of the interior is similar to what you find in the Model S and Model X and is much more suited to the Model 3’s price range. However, as this is a pre-production model, it’s too early to judge what the final look and feel will be like.

So far, though, the Model 3 is shaping up to be a huge hit. It’s a much more substantial car than other electrics in this price range, the Chevrolet Bolt EV and BMW i3, and if it’s anything like the Model S it should also have the performance and driving dynamics to outshine many of its internal combustion counterparts.

You'll find our complete coverage on the Tesla Model 3 at this link.