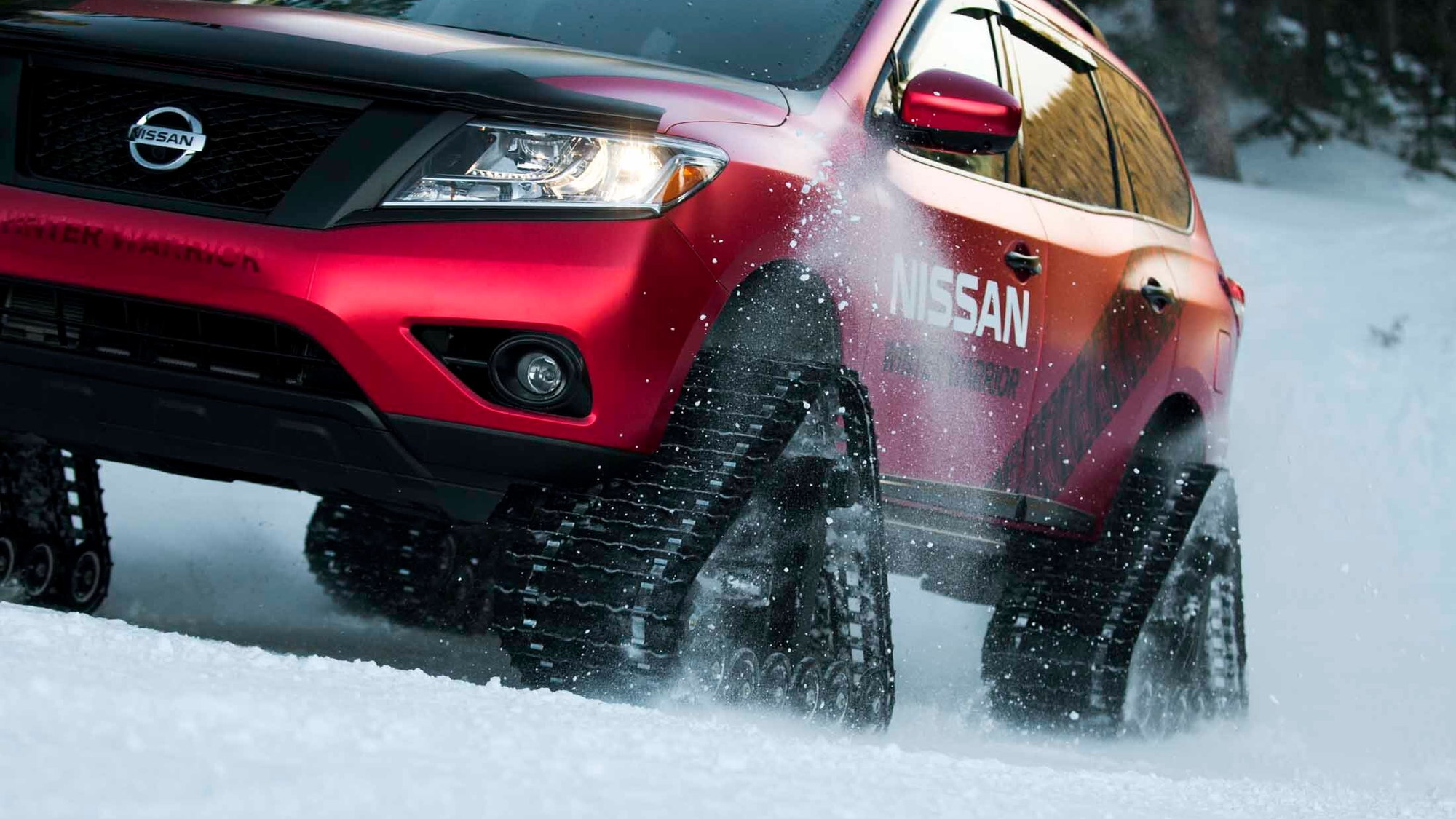 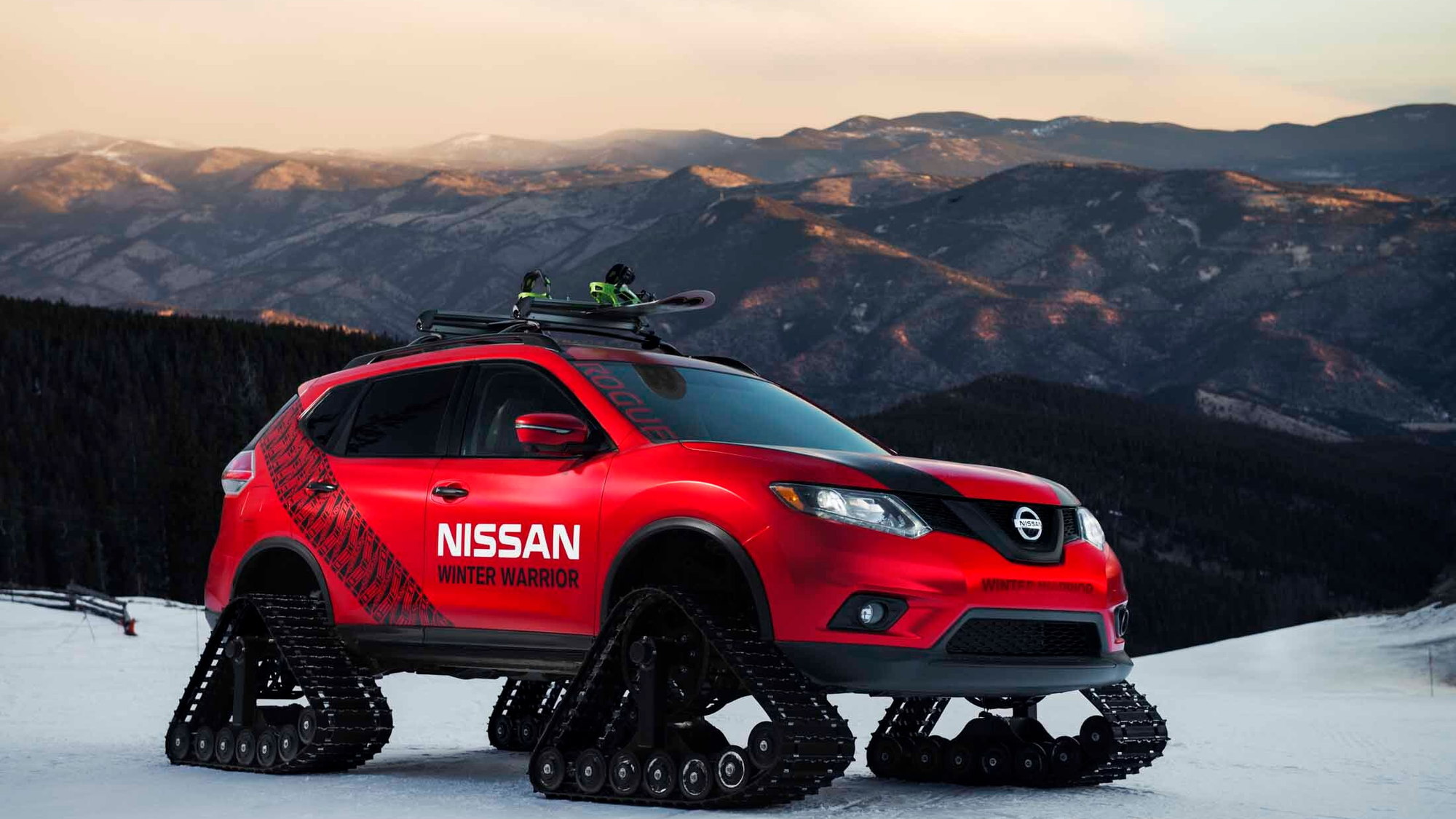 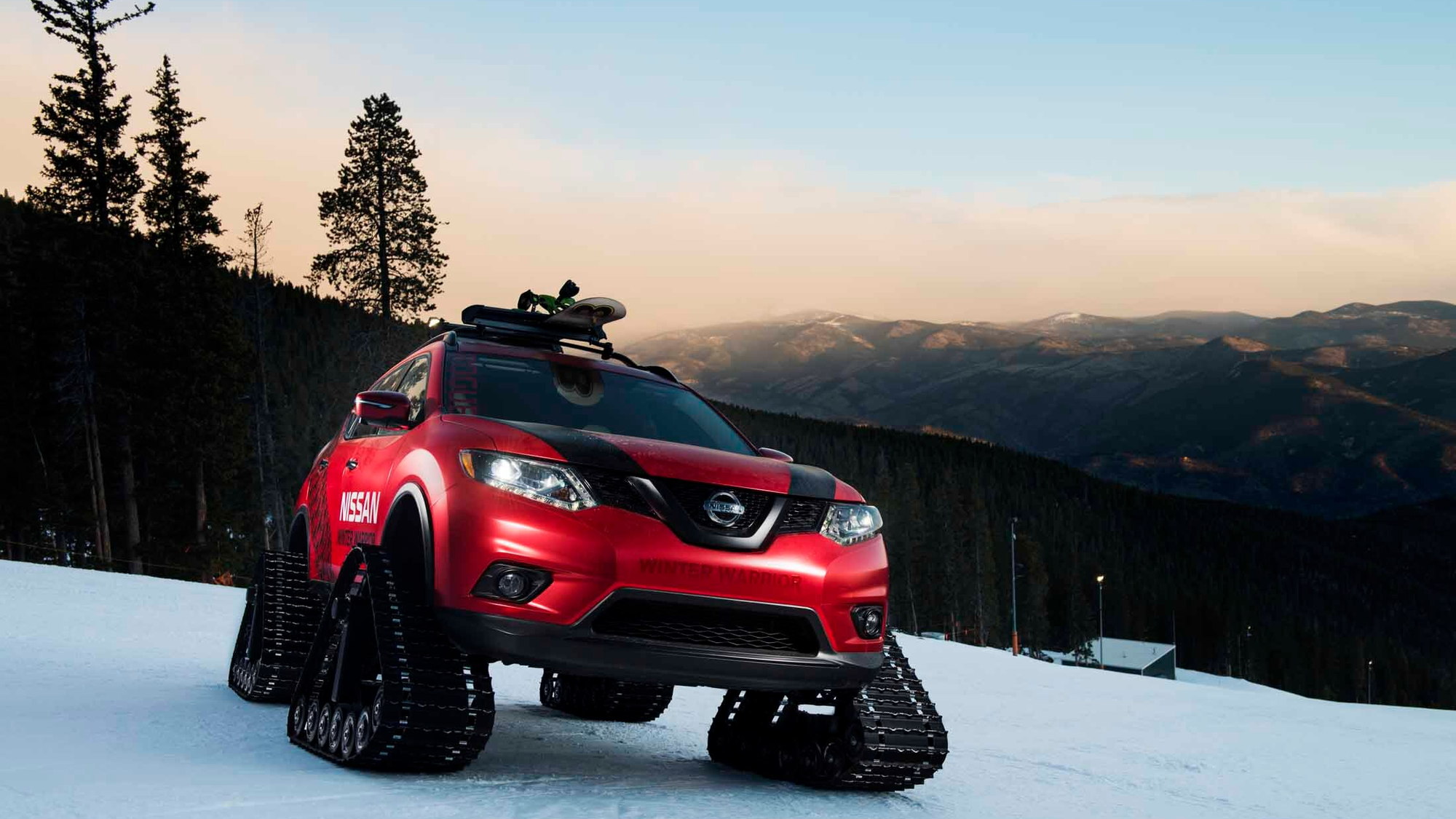 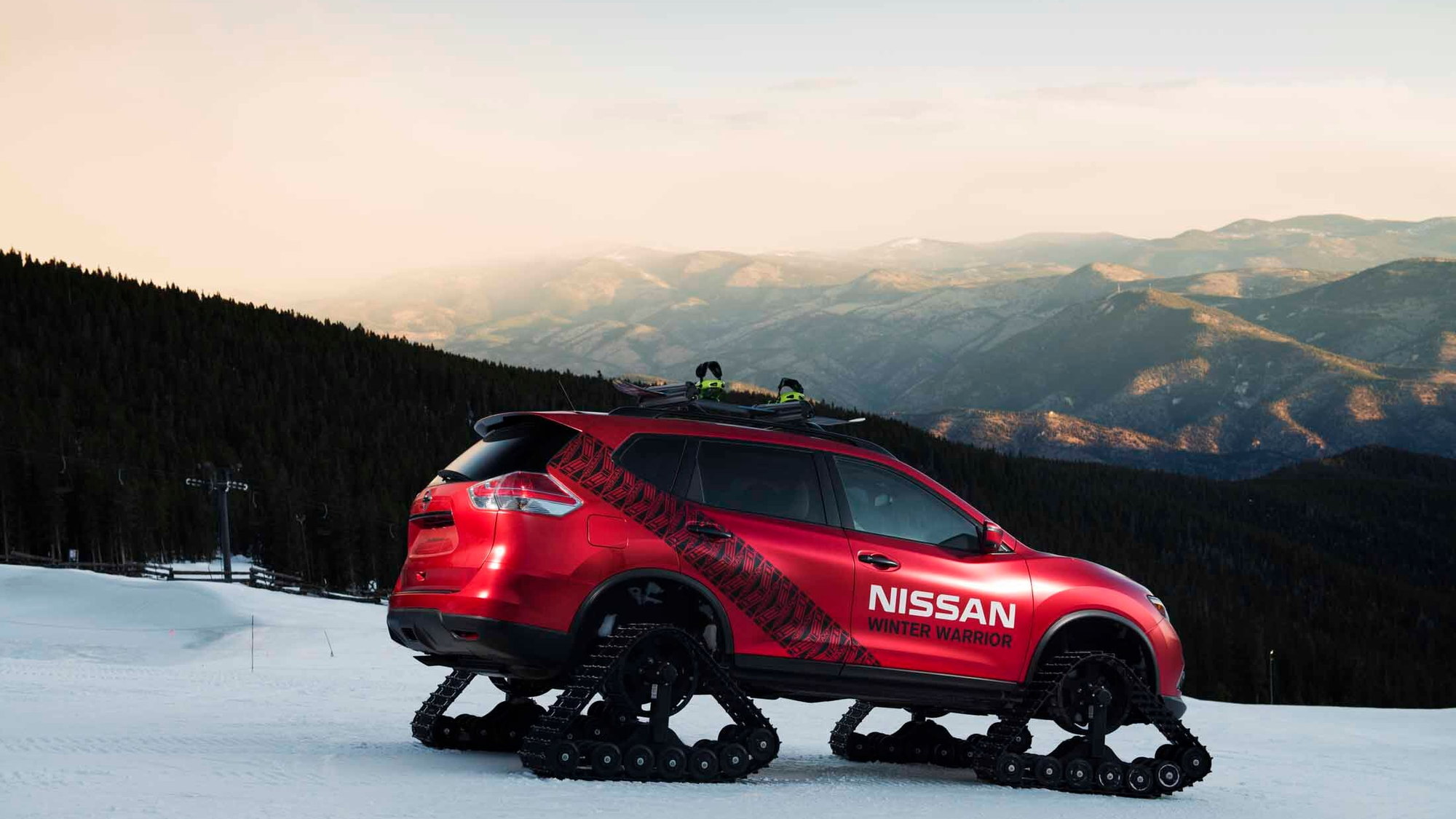 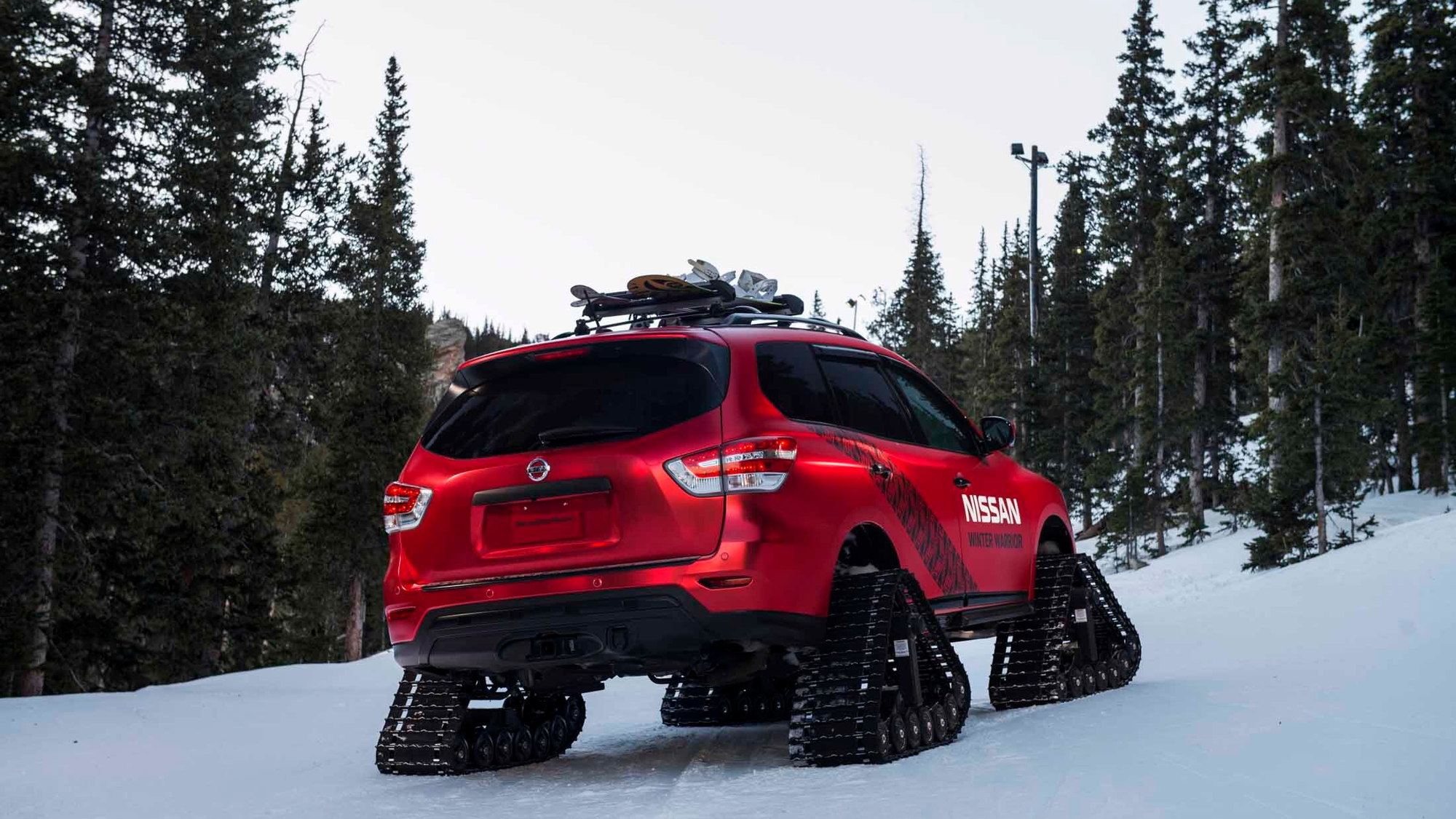 Someone at Nissan has a sense of humor... or is a little crazy. Possibly both. Actually, probably both.

The automaker pulled the wheels and tires off of three crossovers, a Pathfinder, a Rogue, and a Murano, and slapped on a set of American Track Truck's rubber tracks. It's like each wheel has its own Sherman tank instead of a rubber street tire.

What's perhaps most surprising is that the three crossovers didn't require any real modifications. Put the stock wheels and tires back on them and they are ready to run through a Starbucks drive-thru in Peoria. With the tracks in place, they're ready for the Starbucks in Whitehorse, Canada (Canada's coldest Starbucks location) in February.

With the exception of some minor fender trimming for clearance, the tracks simply bolted onto the crossovers' hubs. There's no suspension lift here, although Nissan admits that a more practical application of the tracks would probably require a modest suspension lift.

Putting tracks on an otherwise stock Nissan crossover is, undoubtedly, an odd proposition. And a pricey one. The tracks run about $10,000 a set from Northern Michigan-based American Track Truck.

In this case, Nissan ostensibly built its three "Winter Warriors" to showcase the vehicles' ruggedness. In reality, they did it because, well, they can. When we think rugged crossover, we think Subaru or Jeep, but Nissan hopes this exercise will change that perception.

The three crossovers are making appearances at various auto shows this year and the automaker is bouncing around the idea of doing something with them on a beach this summer. They'll probably have a name change before then, otherwise Nissan will have even more explaining to do.

I had the opportunity to put the Rogue and the Pathfinder through their paces on the (fortunately) empty ski slopes at Echo Mountain, about an hour outside of Denver.

The experience was unreal: With the tracks, these crossovers are wholly unrefined and thoroughly unpleasant to drive.

Yet they're also giddily thrilling. I haven't recently driven a vehicle that made me smile as much as these two.

The Rogue's 4-cylinder puts out an acceptable 170 horsepower at sea level, but 10,500 feet of elevation and four tracks later, it moves along at a glacial pace. At slower speeds, the Rogue bounces and shudders on its tracks, but once up around 20 mph, things get a little smoother. Curiously, the crossover's CVT works exceptionally well in these harsh conditions, keeping it firmly within its power band. Of course, you can practically watch the fuel gauge plummet.

With its V-6 engine, the Pathfinder proves the one to drive. It's almost quick, at least compared to the Rogue, as it snarls its way through gnar pow and up the slopes.

At the top, we realize we need to turn around. While the tracks give the Pathfinder the turning radius of a steamship, they're remarkably confidence-inspiring given their ability to hold the vehicles steady whether climbing or descending a grade.

Once the Pathfinder comes to a stop, even with its nose pointed toward the sky, the tracks hold it in place.

It's an exercise in absurdity, but we applaud Nissan for at least giving it a go. Don't look for tracks to show up behind your local Nissan dealership's accessories counter, but do know that Nissan's otherwise pretty pedestrian crossovers could be modified for absurdity.

It just takes a sense of humor.