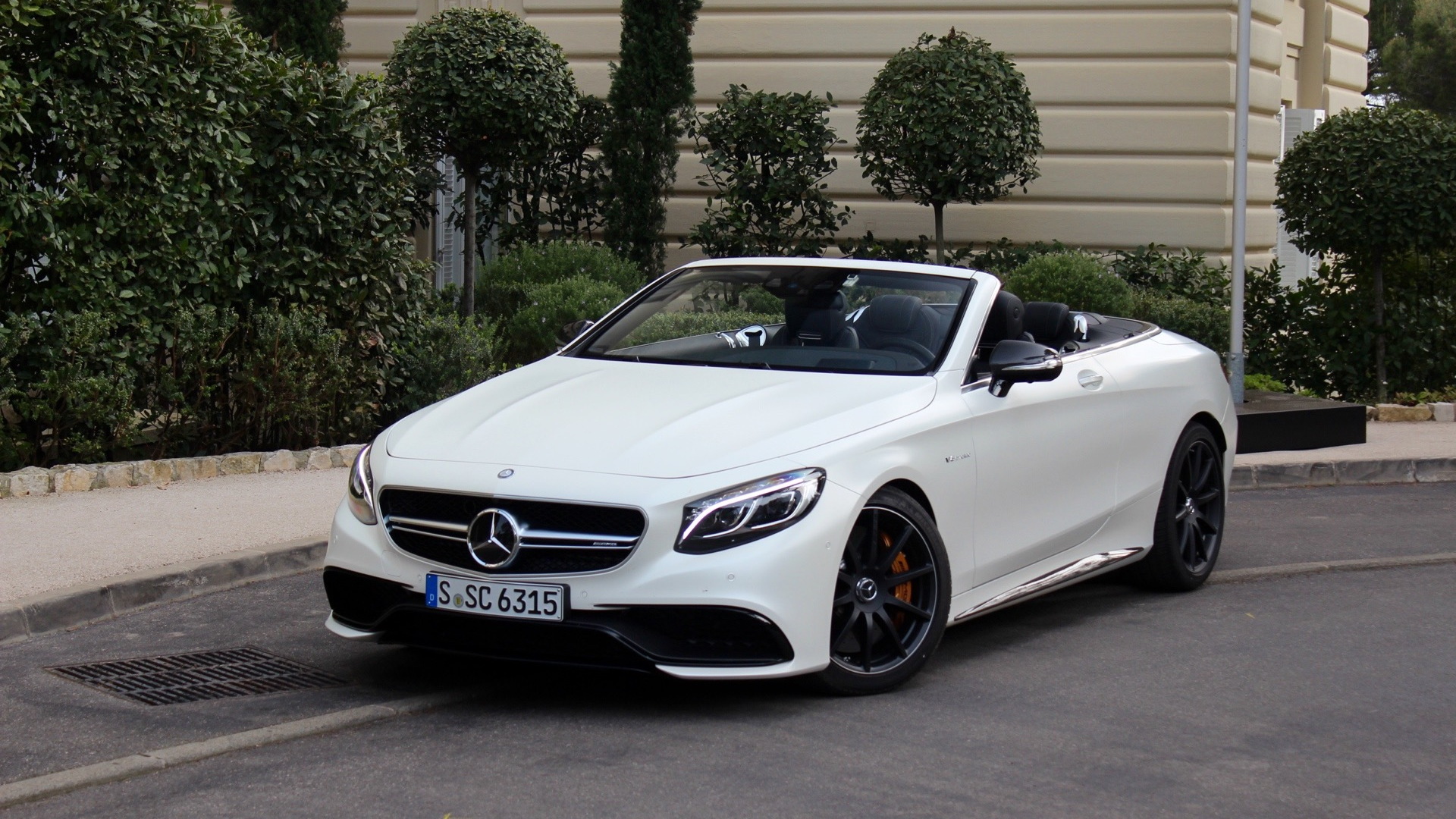 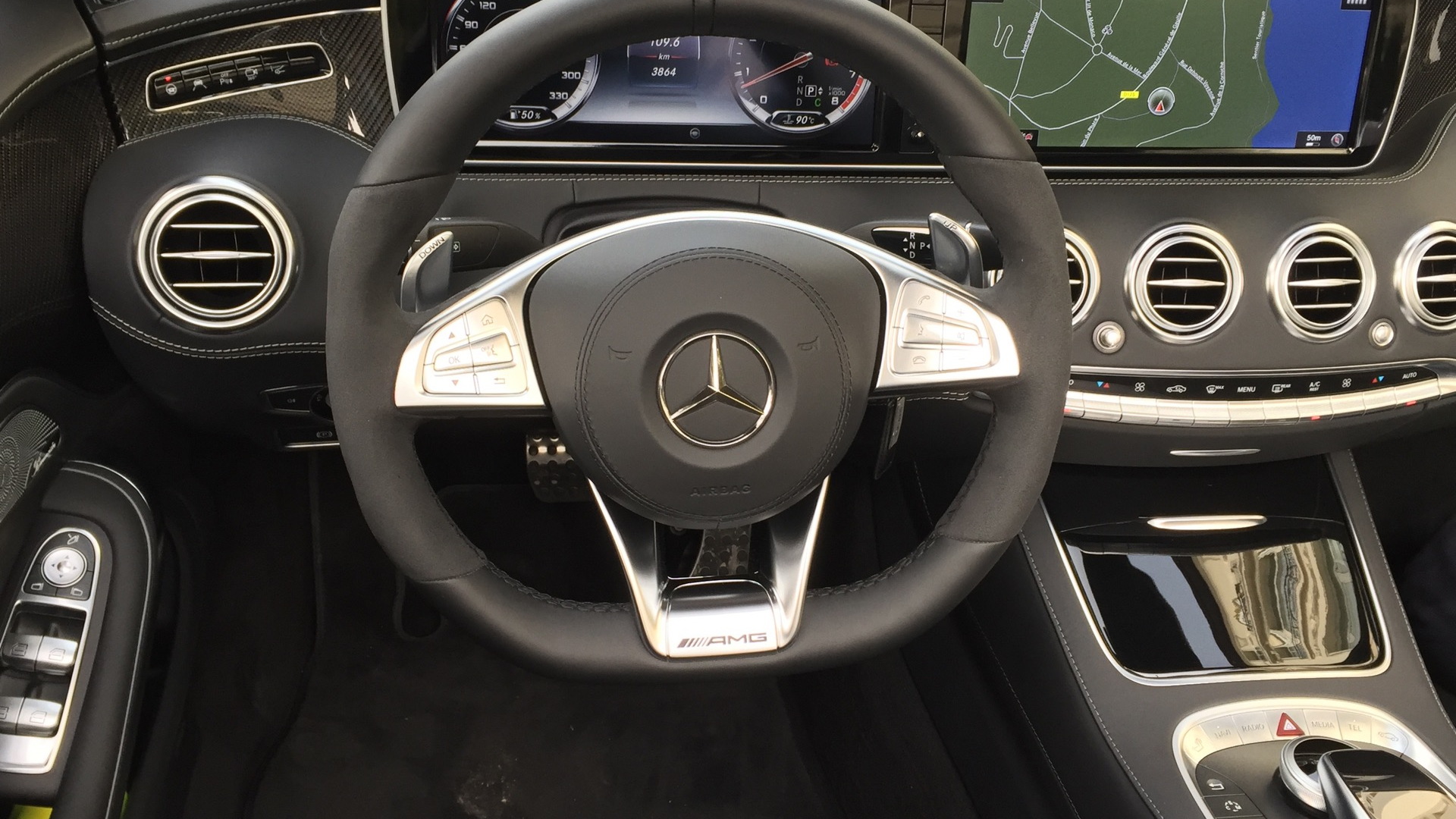 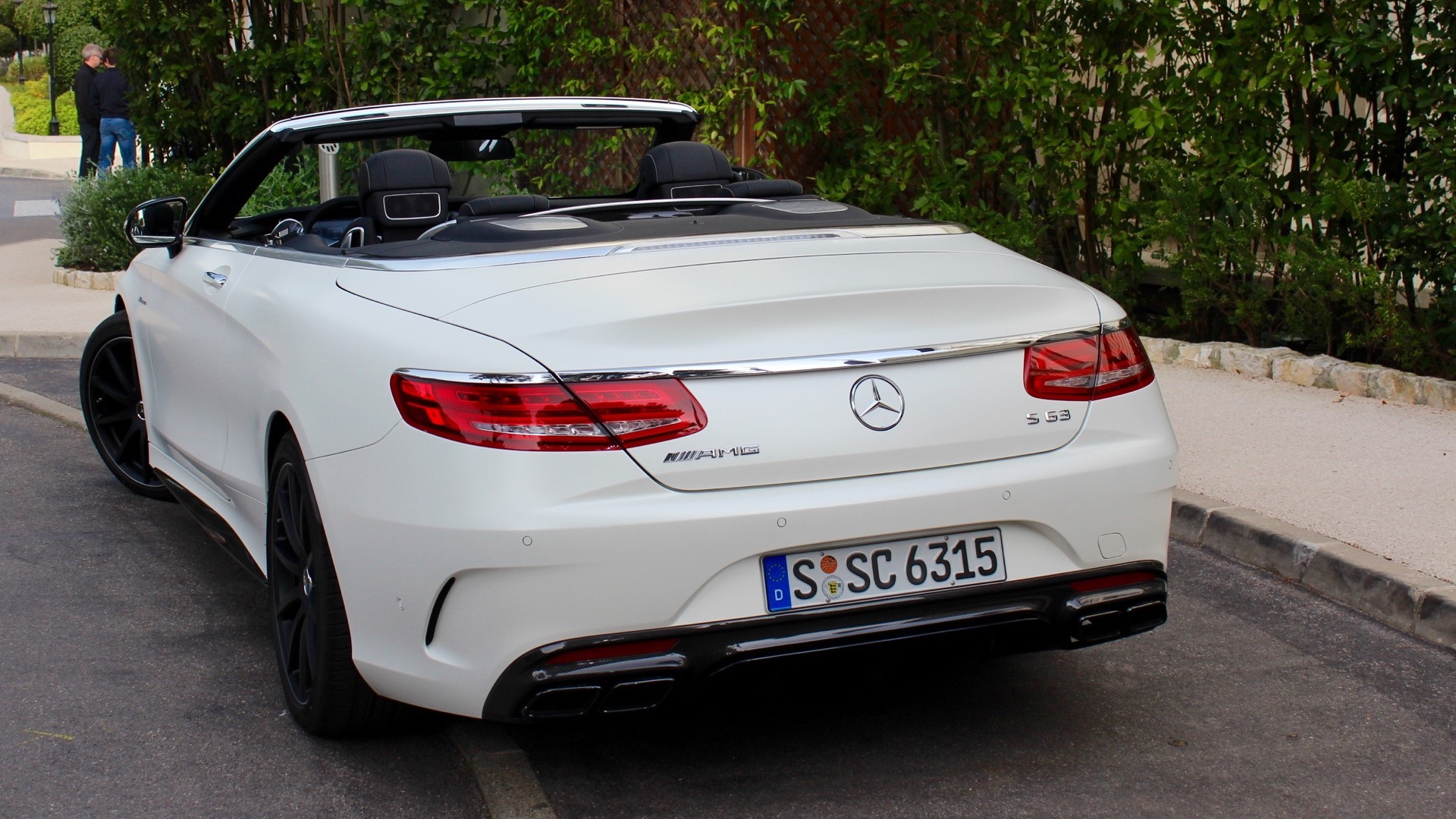 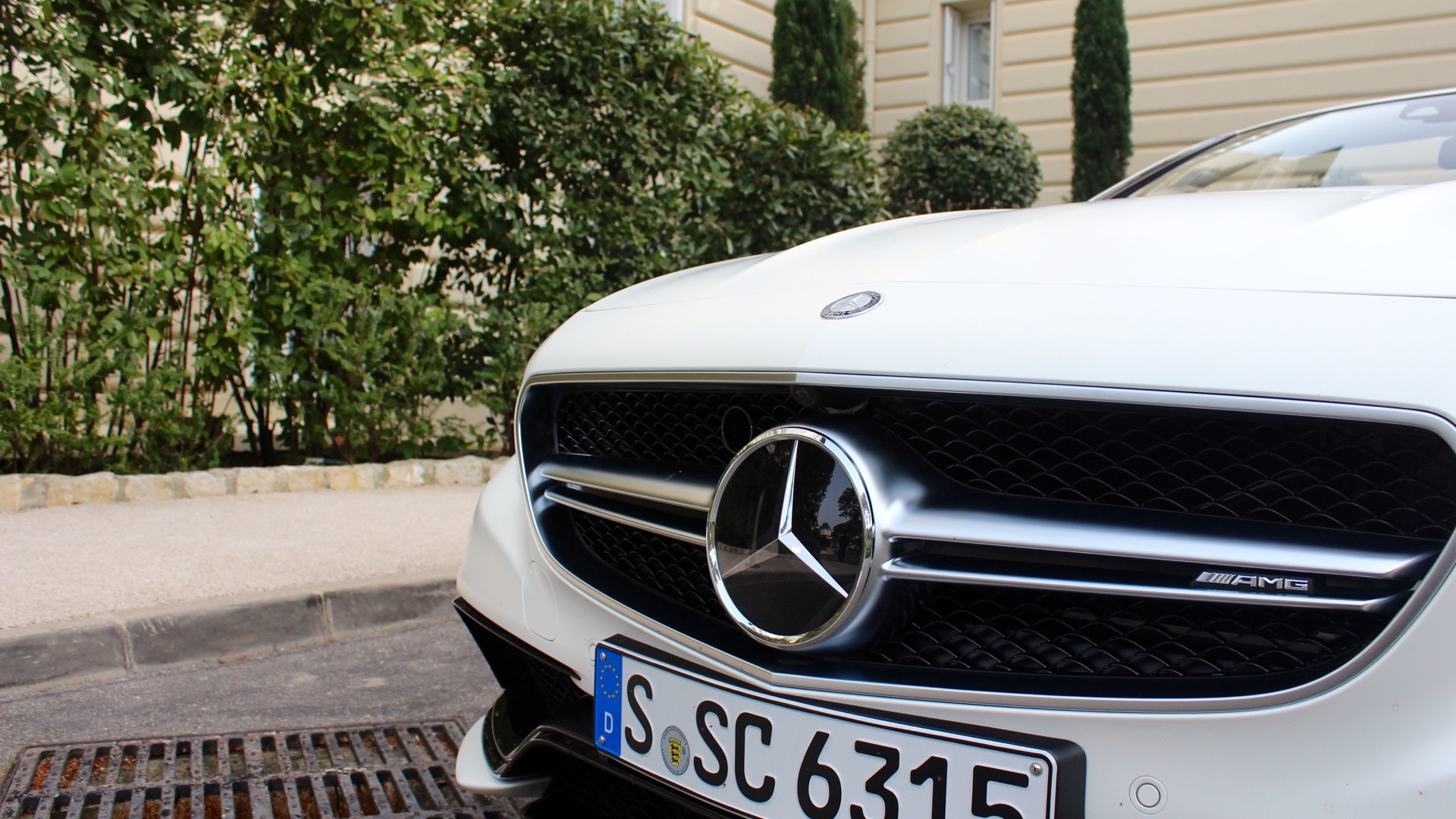 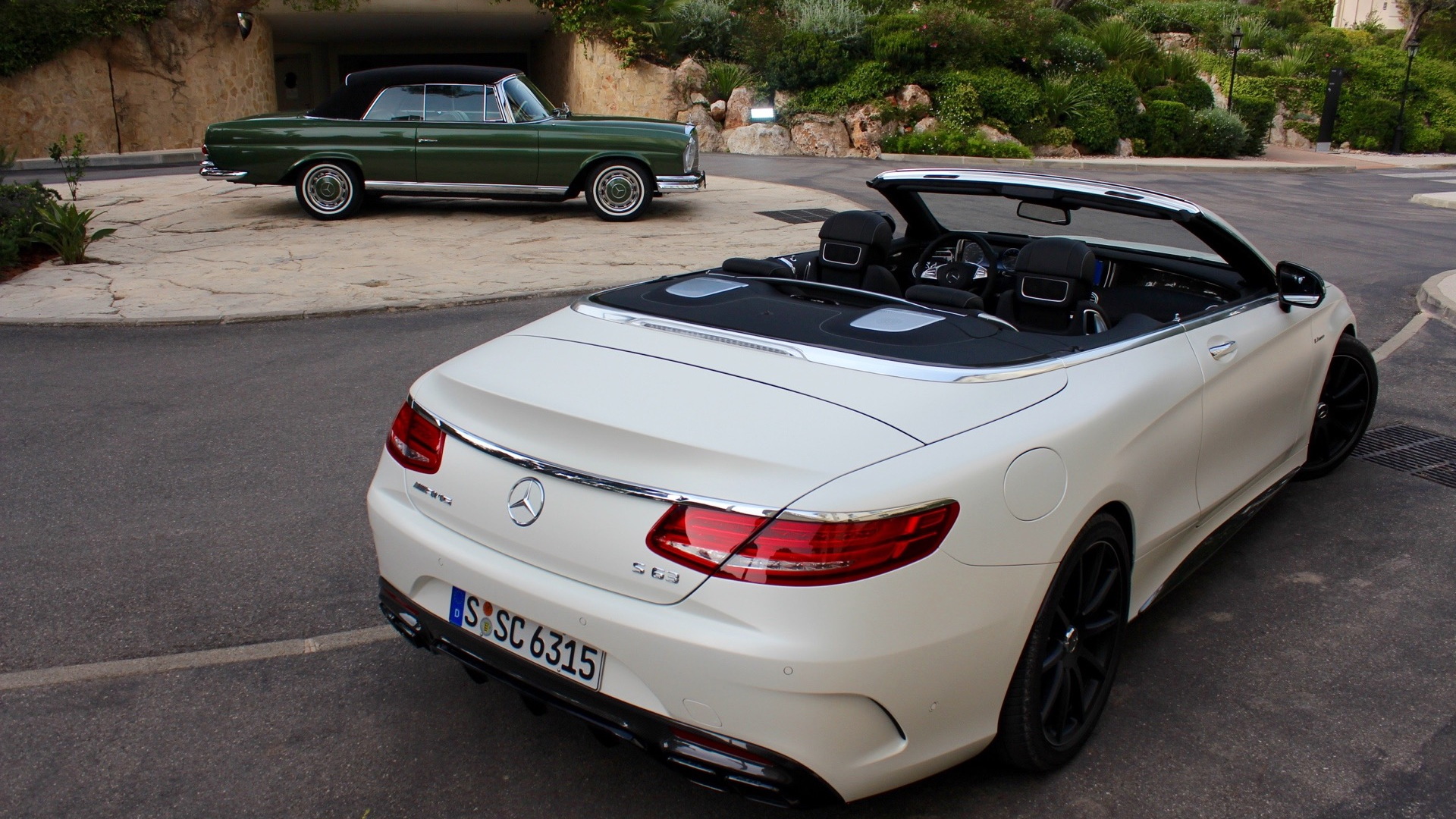 The 2017 S-Class Cabriolet lineup is without question in the latter group. It’s a true four-seat convertible that manages to splice together the beauty and grace of the S-Class sedan, the ostentatious perfection of the S-Class Coupe, and just a hint of attitude from the SL roadsters—and yes, a nod here and there to the formality of the CL coupes that precede it.

On a programmed drive route that took us from Nice, along France’s beautiful Côte d'Azur—the French Riviera—then through Cannes (bustling a few weeks before the Cannes Film Festival) and then up into the countryside, we found the S-Class to be a glamorous conveyance.

But it’s far more than that; on the motorways and winding foothill roads the rest of the afternoon, this big ragtop demonstrated a near-ideal mix of comfortable and engaging—in a way that will please as a special daily driver, an executive’s weekend getaway car, or the sort of car you entertain with, for double dates and evenings out.

The two V-8 models of the S-Class Cabriolet will arrive at U.S. dealerships in late spring; expect the S65 to arrive by late summer.

The S63 also includes all-wheel drive—a system that sends 67 percent of torque to the rear wheels by default for driving enjoyment.

Just as in the S-Class Coupe, the Cabriolet has the new, more gaping, expressive face of larger Mercedes-Benz cars in front, with a high waistline made interesting by soft sculpting up above and more pronounced creasing down below; the upper sheetmetal follows a hip-like contour, dipping downward around the rear wheels, to bring the S-Class Cabriolet—as the Coupe—the sensual tail of a fastback coupe, with thin taillamps that wrap around into the sides.

Likewise, the Cabriolet only looks like the direct successor to the big CL-Class models when seen in side profile; at pretty much every other angle, it’s simply a far sexier beast.

Are you ready for exuberance?

Calling it that doesn’t feel so inappriate the moment you venture past this car’s high social graces (and especially its phenomally well finished interior) and fire up the engine of the quickest model—and probably our favorite of the lineup—the exuberant Mercedes-AMG S63 Cabriolet. The S63 sounds like a brute, even though it’s responsive and confidence-inspiring.

At other times, though, there feels like a little too much boy-racer intensity baked into a vehicle that many will want to feel mature and graceful. The S63 starts with a baritone bellow, idles with the burble of a muscle car, and crackles with overrun when you lift off the accelerator. It’s bursting with enthusiasm, but it’s definitely going to be a bit over-the-top for some.

For them, there’s the S550, which we see satisfying the vast majority of S Cabrio shoppers. It’s $45k less as well, while to the majority of passers-by it’s not going to appear any less special or exclusive—or any less enjoyable on a sunny day on the Riviera.

Superb steering for all, but AMG models still shift better

There’s one exception to that. For now, seven speeds are clearly better than nine. We much preferred the AMG Sportshift transmission, because of its very quick downshifts that didn’t upset the car’s balance as we went fast into corners, and for its snappy upshifts and great control with the steering-wheel paddles. In Sport mode, you don’t even need to use them though, as the transmission is so proactive, with downshifts the moment you dab the brake pedal.

The 9-speed follows most of the same behavior, only it doesn’t feel as confident in lower city speeds and in the tightest hairpin corners; there the AMG transmission’s clutch pack seems to show its superiority over the other transmission’s torque converter.

Both models have surprisingly quick, accurate steering; and while the steering wheel feels smaller than perhaps it should for such a large car, it’s altogether a combination that makes the S-Class Cabriolet easy to place—important on those narrow French lanes where we were one of the widest cars on the road.

The S65 V-12 is expected to make up a rather small portion of the lineup—it costs nearly a quarter of a million dollars, to start—and although it’s the most powerful model in the lineup we’re expecting it to again be a little less boisterous in overall feel than the S63.

Keeping the noise and turbulence out

Getting in and out is easy, although the doors are of course quite long. Seats are absolutely dreamy; they feel like the same ones offered in the S sedan and have an available Energizing Massage function—which, in the S63 with its more aggressively bolstered sport seats was almost too tight at the side bolsters.

The multi-layer top itself can be opened or closed in less than 20 seconds, at speeds of up to 37 mph. It definitely seals out a lot of outside noise, and it stows in a tight space that allows enough of a trunk for several carry-on suitcases.

Raising the front and rear side windows makes a huge difference for wind turbulence in the cabin at normal boulevard speeds and relaxed highway ones, but at higher highway speeds that aerodynamic baton seems to be passed back to the strong, sizable wind deflector just behind the back seat.

Visibility is definitely a bit limited with the top in place, although the light tones used in much of the lineup for the instrument panel help lift the feel of the interior. So do the multiple top colors, which include even a burgundy red hue.

Although the instrument panel forgoes real analog gauges in favor of a screen of simulated ones, the approach has some disadvantages here as it can get quite bleached-out in midday sun.

The space this convertible requires to park can be another serious drawback. At about 198 inches long (or 199 for the AMG versions and their additional airdam fanfare), the S-Class Cabrio is an exceptionally long car for a two-door—and a car that will still live as a two-seater the vast majority of the time.

Ride comfort is every bit as good as you might expect from this long two-door, riding on an automatic air suspension—with raised mode for poor surfaces and a lowered “Controlled Efficiency” mode at 75 mph and higher.

This is one of the best convertibles on the market for back-seat space. There will be a little bit of negotiation if those in front intend to have their seats back all the way; but you can bring three of your best friends along—and not feel too bad about who ends up in the back seat.

Remember how great it is to have the heat on in a roadster on a cool, sunny day? The S-Class Cabriolet goes many, many steps past that. It has a Thermotronic intelligent climate control system with 12 different sensors and 18 actuators to help provide the right boost where it matters—a real challenge with the top down, though one which the system really rose to. A charcoal filter system removes odors from the cabin air, while a fragrance system will add them back at your whim; and in combination with the always-awesome Airscarf neck-level heaters (and yes, there are even heated armrests), we found plenty of comfort when we set out with cooler weather, and the system transitioned smartly to cool us later in the afternoon.

CHECK OUT: How to heel and toe and also why you should be doing it

In the end, what makes the S-Class Cabriolet is what it truly is, rather than what it’s not. This is a truly comfortable four-seat convertible, one that looks glamorous—and makes you feel that way, too.