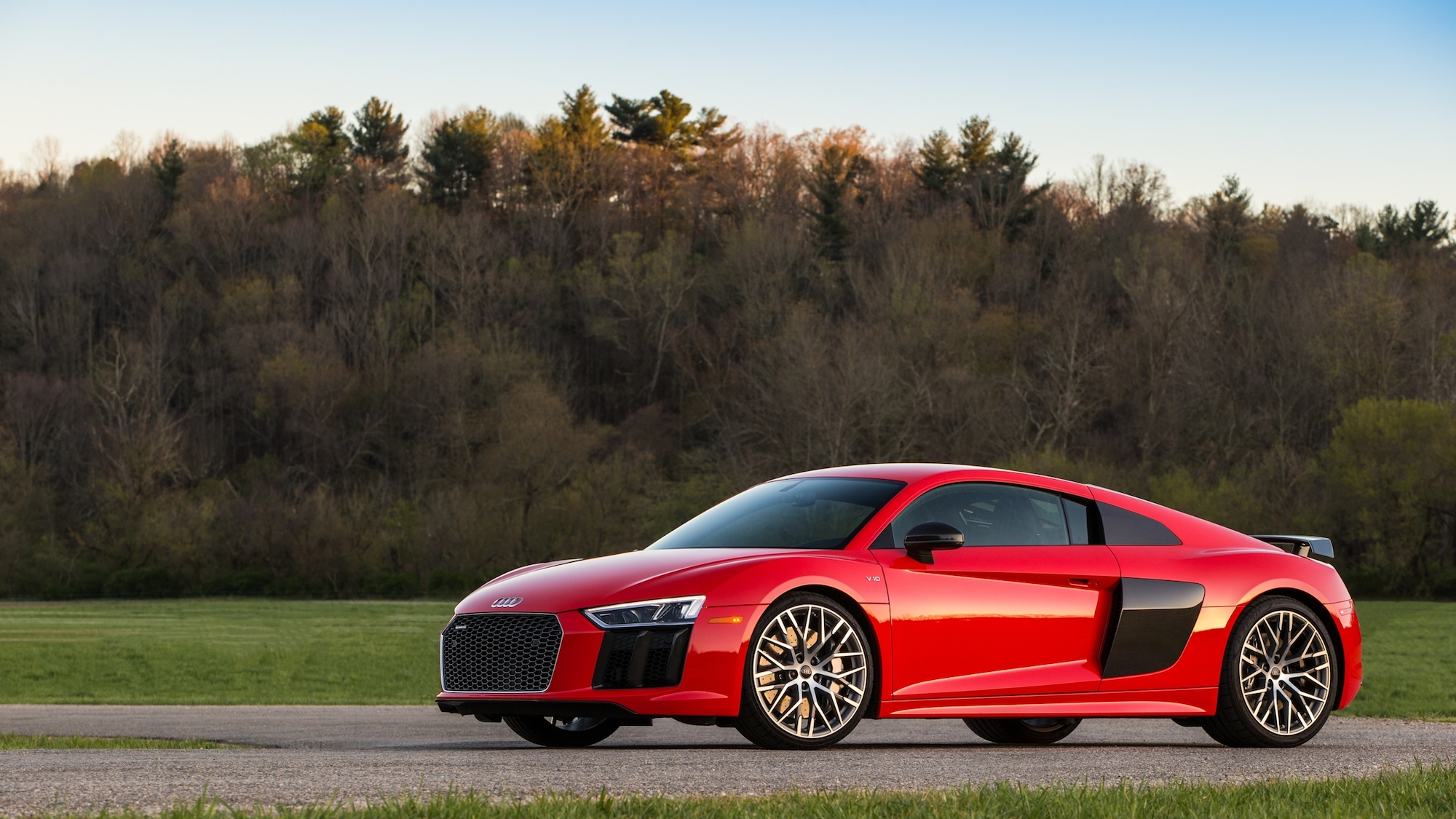 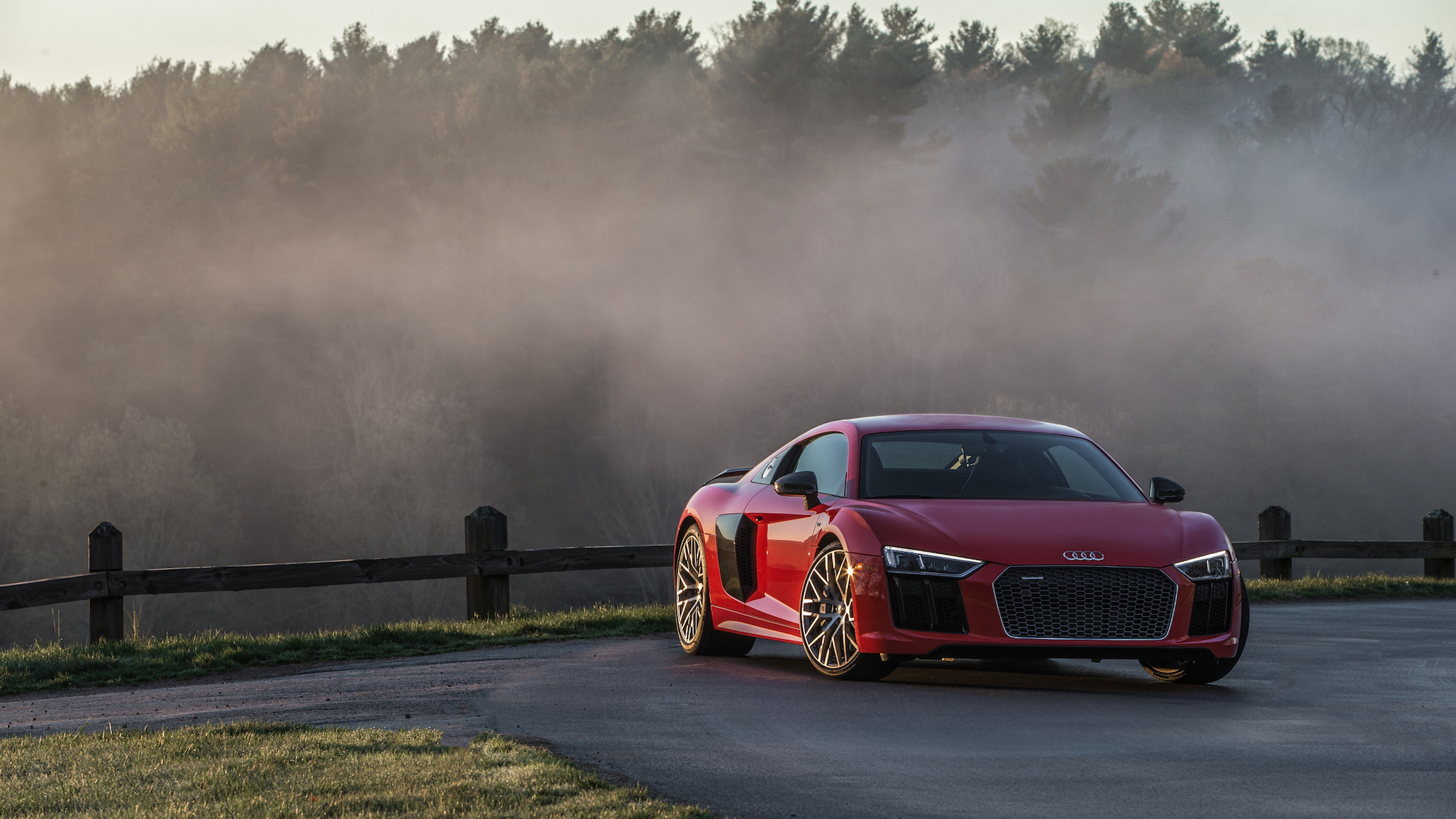 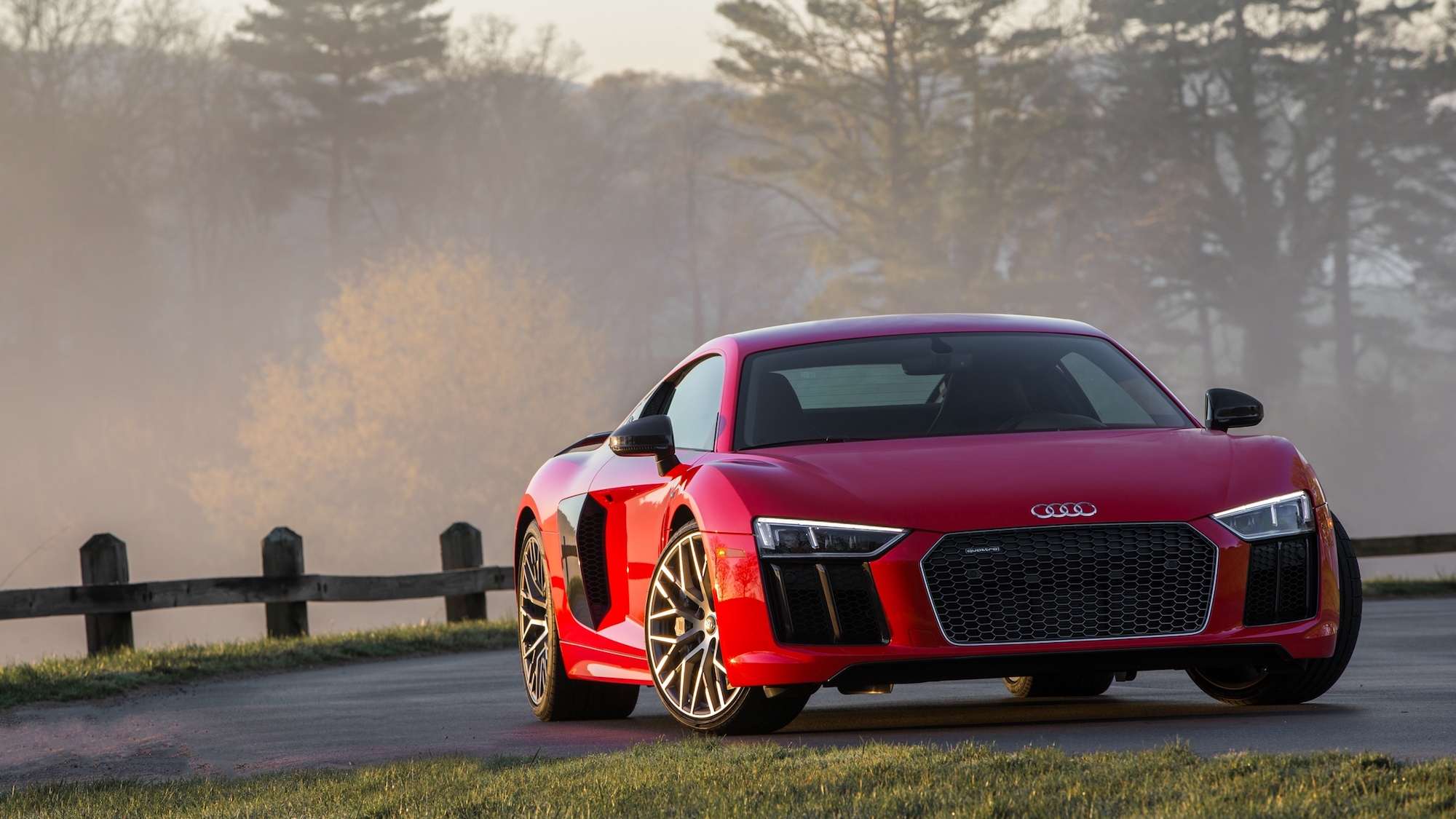 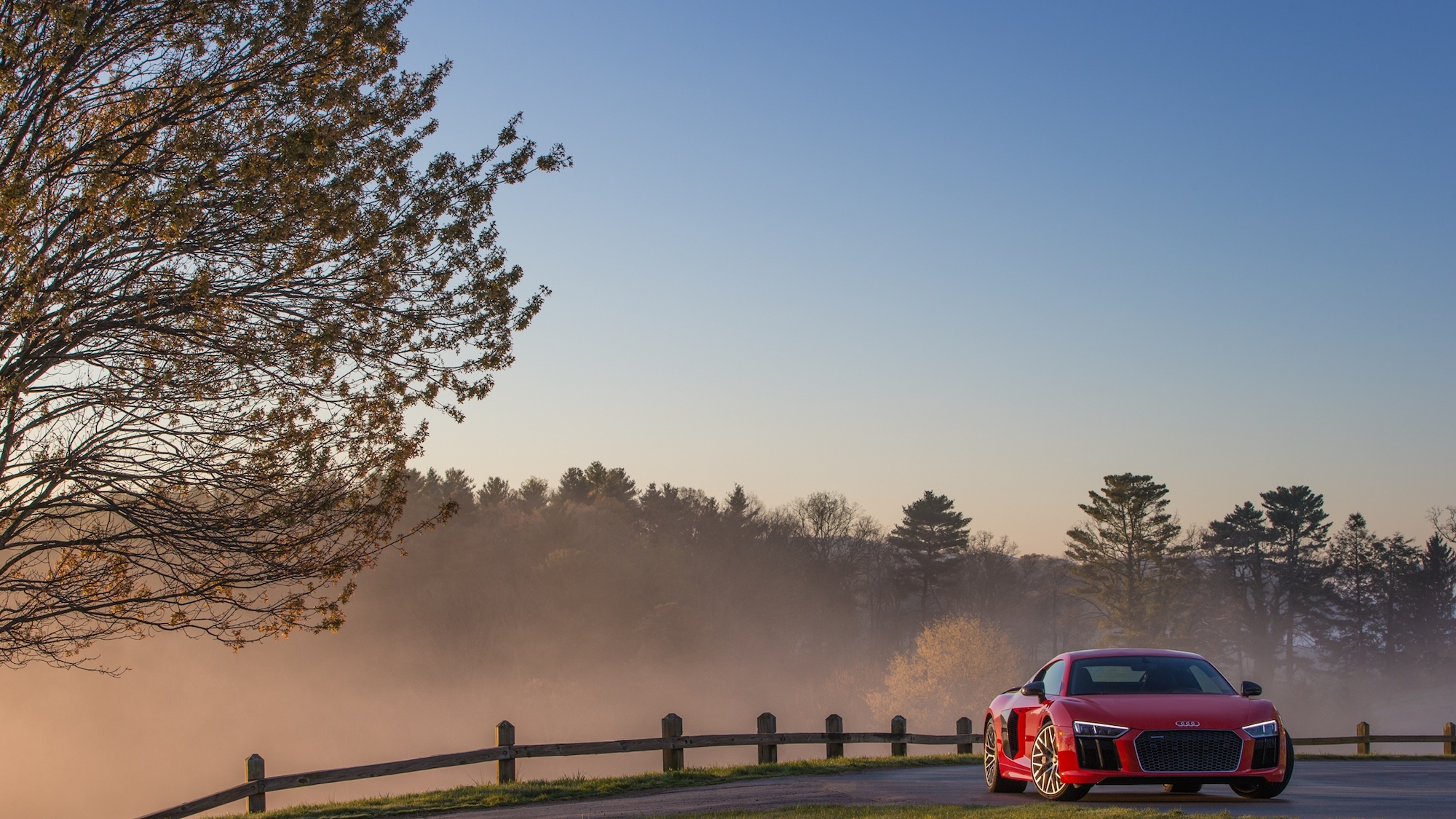 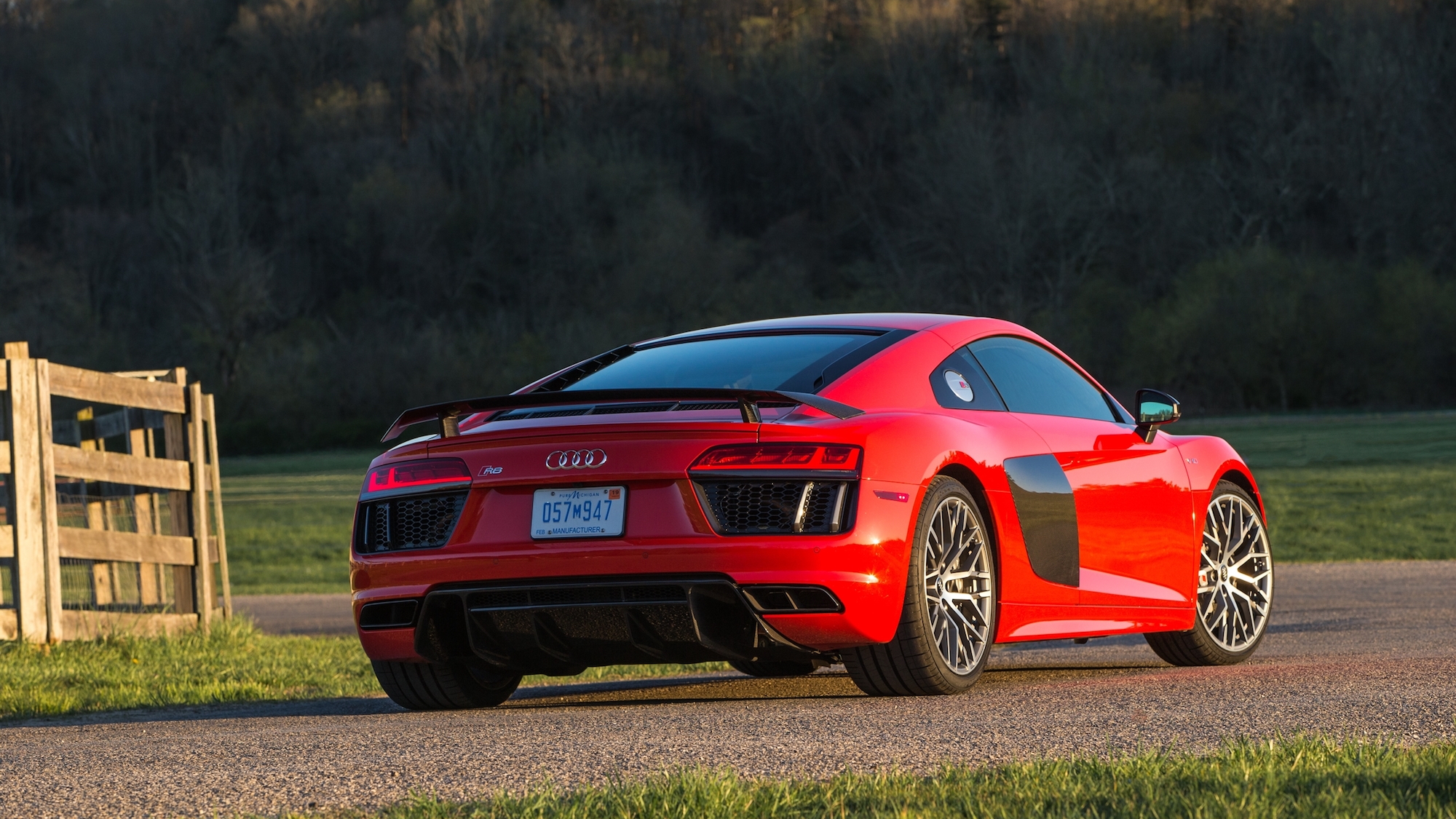 Audi has come a long way since the days of the original Quattro. That all-wheel-drive original changed minds about which wheels should drive a performance car.

But the Quattro wasn't quite a sports car, and it would take Audi another two decades before it would field an actual rival for cars like the Porsche 911 and the Chevy Corvette.

That car arrived in 2008 in the form of the Audi R8. After a fantastic first generation, the R8 is new again this year. Faster and even more sure-footed, it’s set to hammer away at those challengers and new ones, such as the Mercedes-AMG GT, and the revived Acura NSX.

It looks great on paper, with V-10 power to go with its luxury trim and its tech-rich cockpit. But there’s a better way to prove how good the R8 is at balancing performance and luxury.

That way, is a trip to the most hallowed ground in NASCAR, by way of some of the best backroads in America.

Just as spring broke across Appalachia this year, I had the good luck to climb on a high-speed gravy train, to slide down the geological spine of the Eastern Seaboard in that car.

Over the course of three days, our speeding skunkworks drilled through rural North Carolina, Tennessee, and Virginia, then did a hop-skip-jump to Florida's Daytona speedway, for a very special drive of the 2017 Audi R8.

Audis are nothing new in the hipster capital of North Carolina. Part college retreat, part retirement villa, the mountain haven is a bit of ski-slope Vermont tucked away in the boonies. That's no slur. There's actually a nearby town called Boone.

Still, Audis stand out. Rotting Subarus bang around here like they haven't received their death warrants in the mail. There aren't as many pickup trucks per capita as other places in the Deep Woods Off slice of the Carolinas, but the balance still tilts toward vehicles that suffer plain neglect.

There couldn’t be a car less Asheville than the R8—its hardcore V-10 growl echoes loudly in the heart of this progressive college town.

Asheville knows what luxury is all about, though. It’s the home to Biltmore, the largest home in America, built in the 1890s for the Vanderbilt family.

The Biltmore house is a postcard-perfect picture of old money. All that limestone makes for a high-contrast backdrop for the R8, with its crisp, technical lines and bullet-like silhouette.

It’s a stunning shape, with a low-slung stance, two-piece side blades, and a roofline that pulls the shape taut all the way to the tail. This new version’s wider and more menacing in its stance than before.

Inside, the R8’s cockpit practically begs for high-speed driving. Gunmetal trim outlines a spare black dash and big, high-resolution screens—including the one that sits where the gauges would normally be.

Audi calls this the virtual cockpit. The display can morph from navigation maps to computer-generated gauges at the touch of a button. It’s a calling card for a new generation of Audis, and frankly, it’s dazzling.

In our 2017 Audi R8 review, we said the car "balances thrilling power and handling with everyday livability."

The proof comes easily, over the next few hundred miles. The R8 puts us at ease as we aim for the heart of Virginia, even when we drop the hammer, taunting the limits of grip and the local law enforcement.

It’s a game of cat and mouse, but it’s a rewarding one. The 5.2-liter V-10’s intake snorts and its exhaust crackles at the slightest tip into the throttle. The V10 Plus maxes out at 610 horsepower and 413 pound-feet of torque; the slightly milder V10 rates 540 horsepower and 398 pound-feet. With either, 60 miles per hour rush up on you—and on tight, deep hairpins—in about 3.0 seconds.

From Biltmore, we hit the ground through parts of the Smoky Mountains that don't even have cell service. Places where street names like Snake Bite Holler are accurate retellings, where Blowing Rock still elicits snickers because, in our hearts, everyone who writes about cars is still 12 years old.

Our convoy’s worth about $1.5 million, and it draws fans as we slide between mountains like the pendulum on an out-of-time clock. Snuggled up close to the Tennessee state line, our string of Audis draws the attention of a local reporter, a slew of patinated pickups, and about a half-dozen police from different authorities.

We hustle through North Carolina, Tennessee, then carefully into the heavily policed state of Virginia. On the way, we stumble across some extraordinary automotive non sequitirs. A pranged early NSX with a cracked windshield, parked in someone's front yard next to an SLK Kompressor, in maybe the oddest pairing ever witnessed in these parts. Not one, not two, not three, but more SX4s and Aerios and Equators--in Galax, Virginia, where some out-of-business Suzuki dealer no doubt still has a cult following.

All day long, the R8 blends speed and agility in intoxicating amounts. Its 7-speed dual-clutch transmission clicks off shifts in milliseconds. Magnetic shocks adapt to the road surface with brilliance, shaving the worst off these sandy, gravelly, potholed roads.

Tweaking the R8 through its driving modes reveals a huge range in its ability. In Comfort mode, it quiets down, shifts imperceptibly, and soaks up road rash better than some sport sedans we’ve driven lately.

Dial it into Performance mode, and it’s a rager, ripping from hill top to mountainside with naturally aspirated joy. Yes, the gated-shift manual is gone, but the new all-wheel-drive system underfoot keeps a near-perfect balance.

That and massive carbon-ceramic brakes let us drill away toward dusk, knifing our way to rural Virginia’s Primland resort. It’s our oasis. A place to check on the wellness of the computer bags tucked into the car's frunk. A place for a good night’s sleep, which we'll need before things get much, much more serious.

Breaking the banks at Daytona

Primland is big enough, remote enough to have its own private network of roads. It’s a tempting distraction, but we’re ready to go by dawn, piling into cars and then a private jet, a course set for speed.

It’s a quick flight to one of the most storied, most daunting places in all of motorsports.

Daytona International Speedway is one of the places where the R8’s 203-mile-per-hour top speed gets tested regularly. It runs in racing trim at the 24 Hours of Daytona. That means an identical engine, and 50 percent of its parts in common with the road car.

Daytona isn’t for amateurs, and even the trained drivers in our group pay careful attention to tips from Audi race driver Dion von Moltke as we warm up to Daytona’s imposing banks in a prepped fleet of R8s fitted with racing tires and racing bucket seats.

The cars have GoPros and RaceKeeper monitors, with a crew of two watching the data stream in. There’s a leaderboard. That’s not the usual press-drive recipe—that’s a competition.

First, we take a few customary warm-up laps with an extra kink coned into the racing groove. Once we’re up to operating temperature—us and the cars—the extra cones come off, and it’s on.

It’s three laps at a time, but within a heartbeat, the R8 already feels real, and at home.

Sprint out of the pits and into the short road course worked into the infield, and the R8’s speedometer is already in the triple digits.

Slip through a pair of esses and prep for the first big right-hander. You can slip the surly bonds of grip and let the R8 slide briefly left before it hooks up, moving power from the rears to the front wheels.

Hurtle through the next left-hander, then slam on the binders. There’s a big pivot to the right, where you can open up the throttle, where the triple-digit-speeds make a short comeback.

Then it’s on the brakes again for the big set-up—a quick, tight left-hand bank that puts you on the track where NASCAR legends have risen—and fallen.

Get ready. The bus stop is here before you know it, before you ask yourself why it’s called the bus stop. The second bank erupts, and you nudge the car with a slight steer from the right, pushing it down the bank while the throttle flings the speed higher, and higher. The car pulls ahead serenely, while I press deeper for a mile per hour or three more.

Flatten out for a frozen moment, skip another heartbeat, and the grandstands blaze by, a mosaic of red, yellow, blue, and green, ending in a flash of checkered black-and white.

That’s one complete flying lap, one top speed drifting near the 170-mph edge, one lap time under two and a quarter minutes.

That’s good enough for a fifth-place finish. The R8 has a lot more in it—but then again, the car usually does.

That’s the lesson learned, from a few hundred awe-inspiring miles in Audi’s latest supercar. It reaches for the stratosphere—but it hardly strains.