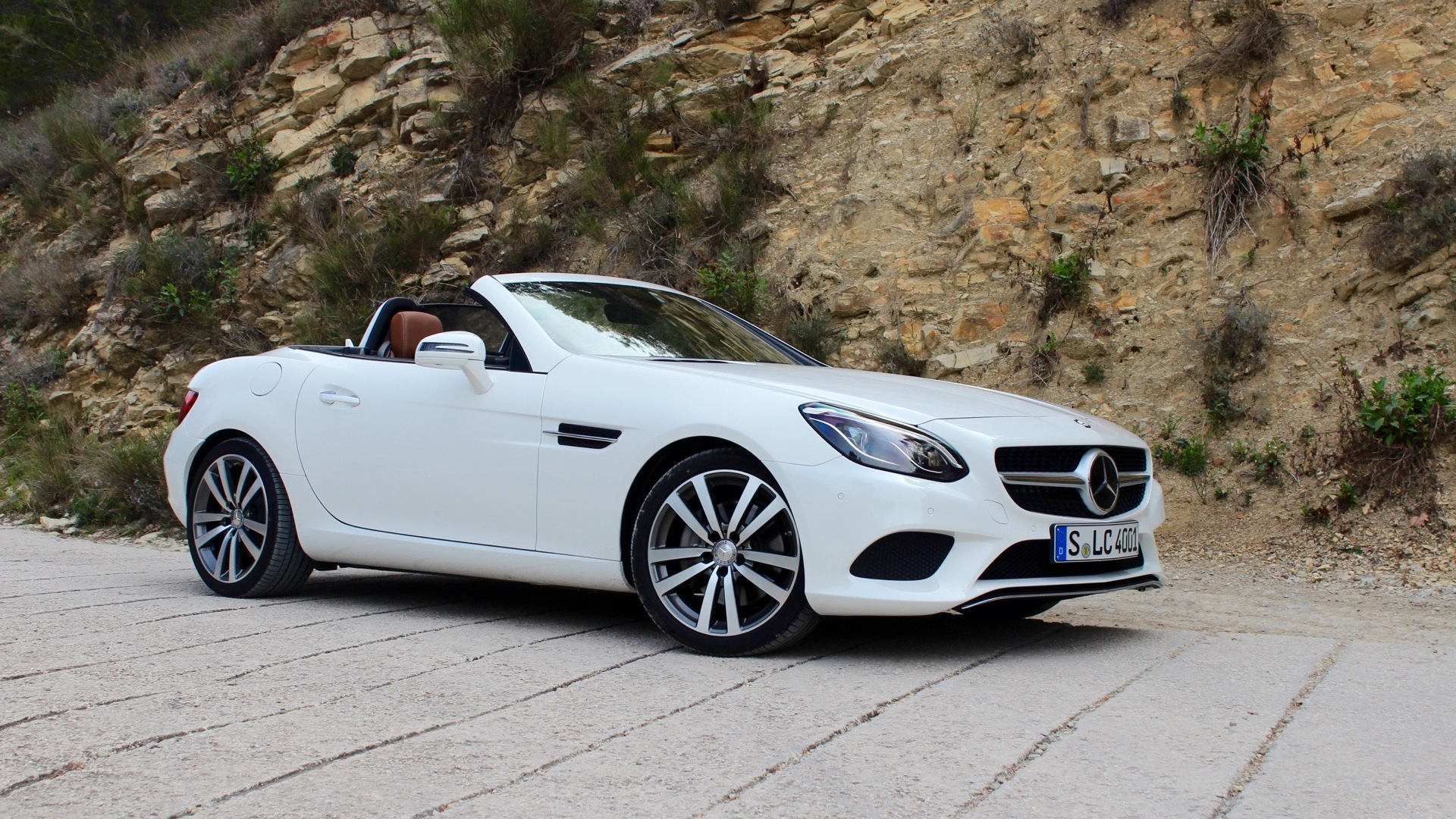 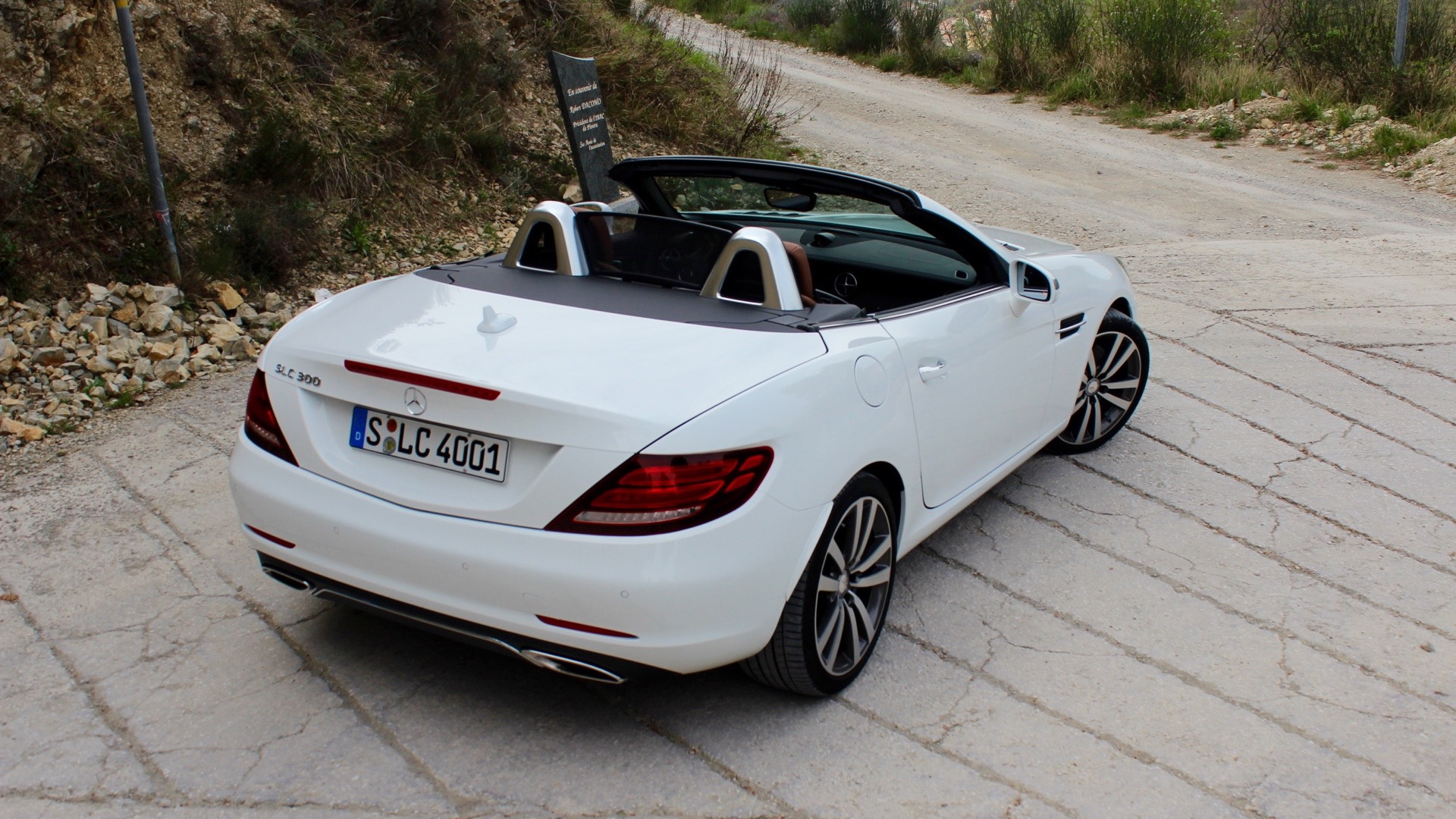 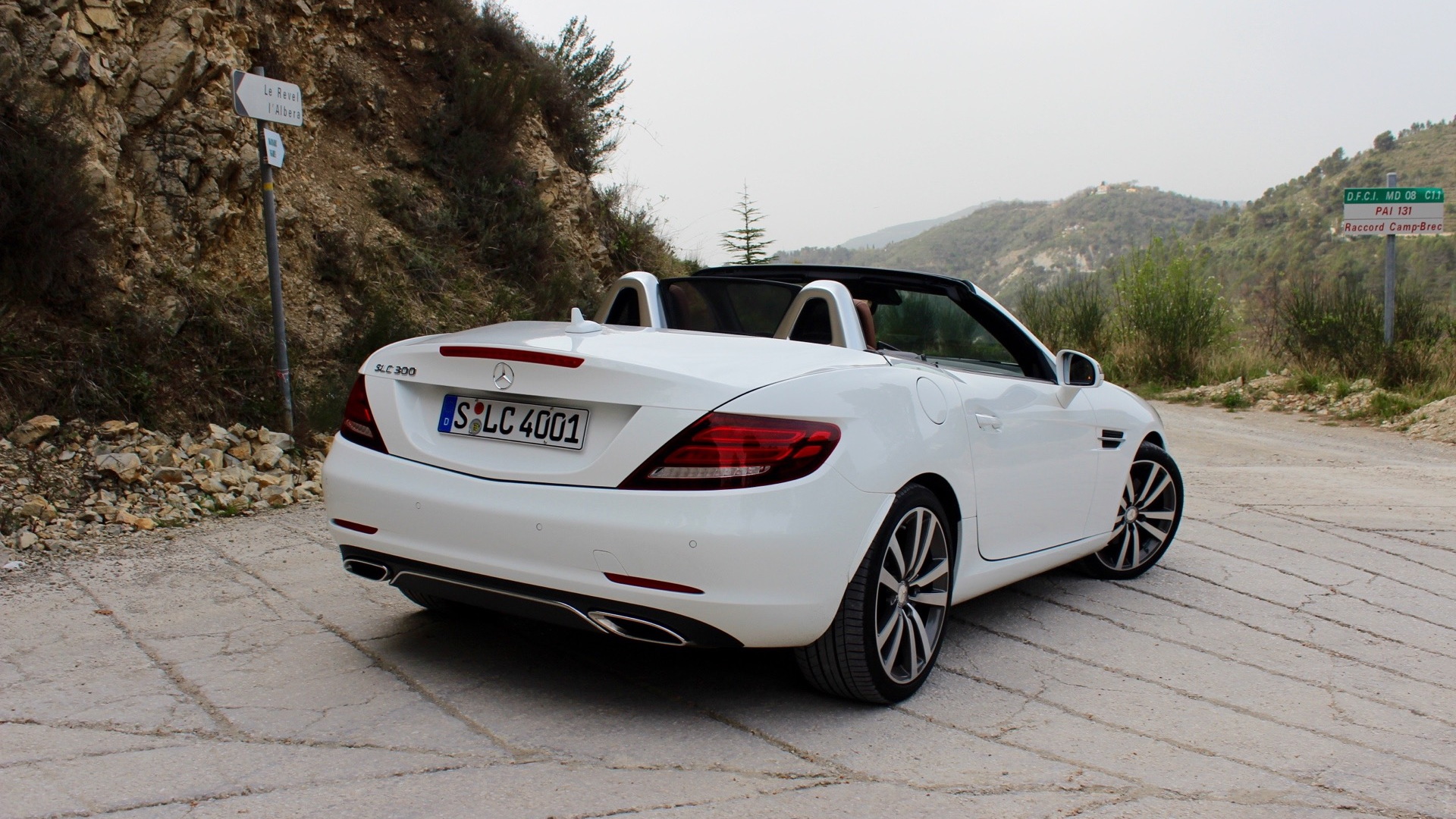 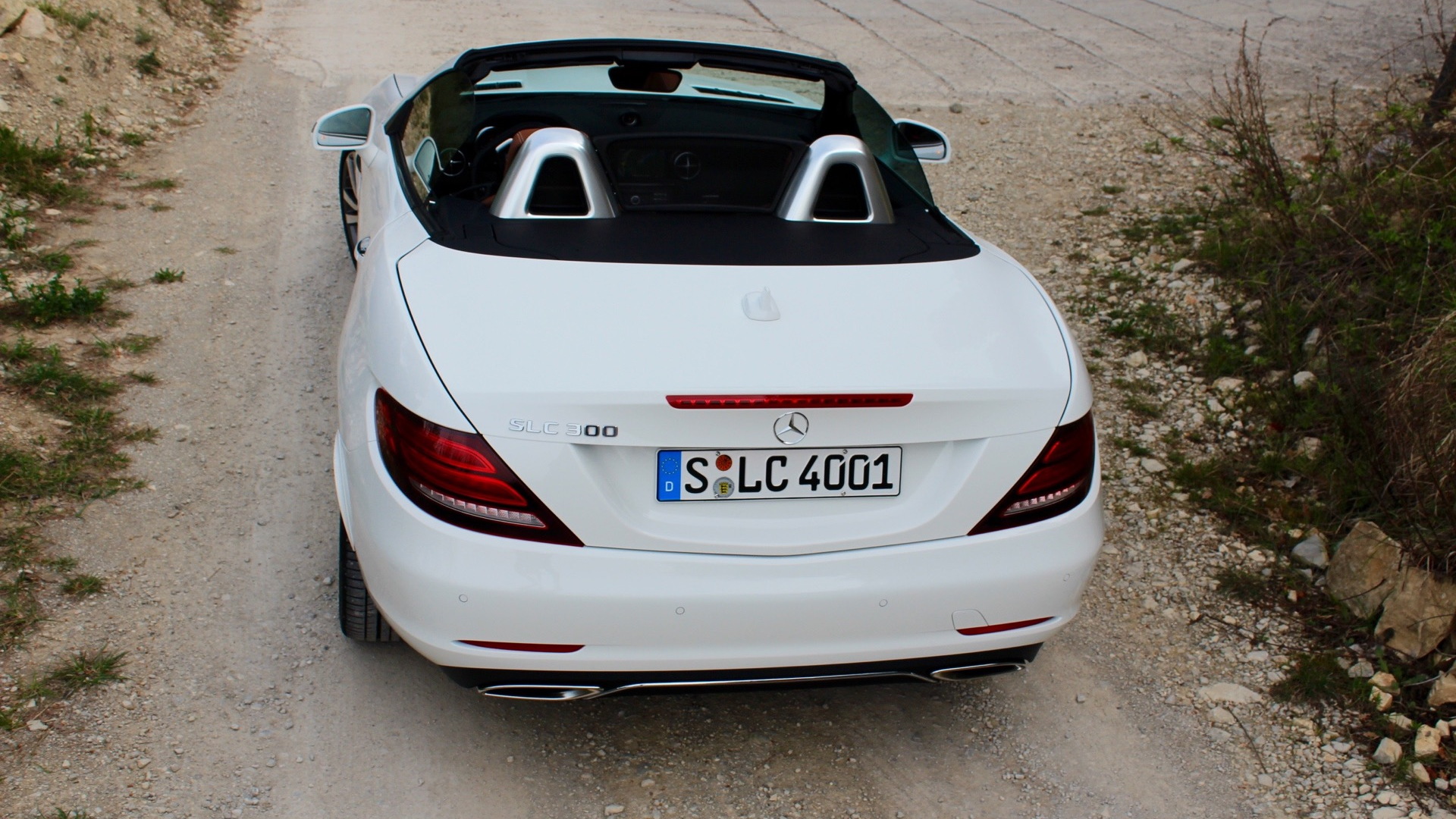 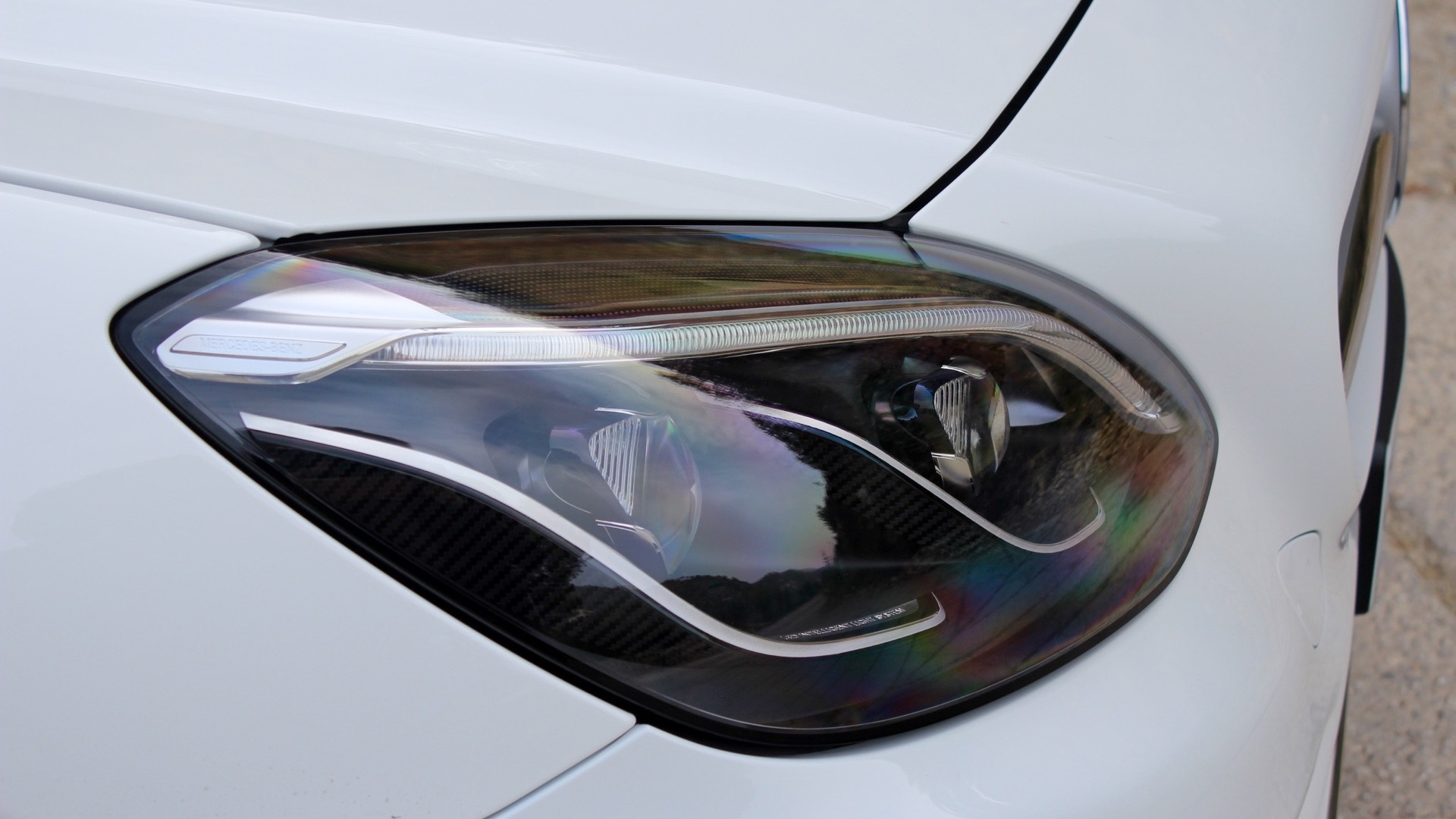 The Honda S2000 faded away a few years ago. BMW Z4 sales have fizzled to levels far below those of the more expensive 6-Series Convertible. Porsche’s pushed the Boxster upmarket. And the only bright spot on the market is the affordable Mazda MX-5 Miata and its stellar redesign this past year.

Where does that leave Mercedes-Benz? While there’s an entirely new generation of this compact roadster in the works, it remains a couple of years away. And what’s here in the meantime might seem to some as merely a rebadged SLK; yet it's more than that.

SLC43 skips some AMG pedigree, goes for the esses

While we won’t go so far as to say the new SLC lineup offers a completely different driving experience, or a completely new look, there’s a net sum of meaningful new-and-improved goodness here—and the big news is the introduction of a new Mercedes-AMG SLC43 that does away with the previous SLK55’s V-8 in favor of a specially tuned turbo V-6.

ALSO SEE: Breaking the banks at Daytona in a 2017 Audi R8

In the SLC43, the twin-turbocharged 3.0-liter V-6 makes 362 horsepower and 384 pound-feet of torque. It’s not handbuilt, like AMG’s V-8 engines, but it, and there’s no version of the specially built, torque-converter-less Speedshift MCT transmission. Instead there’s merely a sport-tuned version of the same nine-speed automatic in the other SLC models. And 0-60 times knock out at an impressive 4.6 seconds.

There are lots of other AMG-engineered improvements—at their collective best with the Dynamic Handling package—to make this a better drive than the SLC300, including a lowered suspension with active damping, stiffer steering components, variable-ratio steering, upgraded brakes, special engine mounts, and changes aimed at improving the stiffness and stability of the rear suspension. Paired with that is the SLC43’s parlor trick: a limited-slip rear differential.

And it’s those latter few changes that give the SLC43 far more sports-car inspiration than you’ll find in the SLC300—and maybe even more than was in the more blunt instrument that was the SLK55. Since there’s less weight in front, the SLC43 is more willing to rotate. Engage Sport+ mode, which allows more leeway, and because of the better weight distribution and the new differential it’s predictable and reproducible—and far less of a white-knuckle affair.

As we found in some of the spectacular, zig-zagging mountain roads north of Nice and Monte Carlo, near the Italian border, there’s just enough body lean to give warning of pending weight transfers and slip angles, yet not so much that you have any uncouth behavior in quick back-and-forth esses.

The SLC43 you just have to think of as an entirely different experience than the SLK55. It has none of the brawny, raucous sounds and overzealous, sledgehammer-like behavior of its predecessor. What’s here instead is something a little less instantaneous, yet nearly as thrilling once you learn this car’s ways.

The other SLC models are badged SLC300—now featuring a 241-hp, 2.0-liter four, as was introduced in the SLK300 this past year. Back in 2012, Mercedes-Benz subbed a 201-hp turbocharged four into the SLK; then last year it upgraded to a version of what’s now used in a wide range of M-B products.

Fewer cylinders and more gears not a plus for drivability

As such, with the new nine-speed, the SLC300 can get to 60 mph in just 5.7 seconds. On the straight line, it feels that quick; although we’ll add that in Comfort mode especially the combination of transmission lag and slight turbo lag don’t make this model feel anywhere close to as perky as the former V-6 SLK350. And when the power does show up, this engine doesn’t build through the rev range; it seems to feel nearly as much grunt at 4,000 rpm as at 5,500 rpm, for example.

Although both of these models have great steering, the changes in the SLK43 offer somewhat better feel and weighting. And it’s abundantly clear that the SLC300 isn’t intended for tail-out driving; push it there and you’ll find the inside rear wheel scrambling for traction.

Thankfully, the SLK43 has an excellent, linear accelerator, just as the SLC300. It’s a great city and scenic cruiser. If it weren’t for the sound being quite different, both of these models feel quite comparable in low-speed drivability.

The excellent top, which can be operated at up to about 25 mph (provided you start when the vehicle’s stopped), stows or deploys quickly and when up, truly seals out the weather and road noise.

Touring for two; leave the armoire at home

Having the top up does pound home just how small the SLC is, though. In this model that’s only the length of a subcompact, the floor wells are shallower than you might anticipate, looking at the car from the outside, which means that most drivers six feet tall and taller will likely have the seats scooted back all the way. And especially with the top down, there’s not a lot of trunk space.

The center-console compartment was just large enough for an SLR camera body with the kit lens—no more—and aside from that there’s surprisingly little storage up in the cabin...which also makes the SLC feel like a carry-over from Mercedes models of the last decade.

Ride quality also depends on the road. The SLC soaks major undulations, yet it tends to feel a little busy over jittery road surfaces.

Mercedes-Benz design has come a long way over the past several years, and the team behind the SLC has done their best to keep this roadster looking fresh. The tweaks are the most successful—or, shall we say, present—at the snout, where there’s a more upright and rounded yet more open grille, inset with chromed points and combined with some more chiseled lower bodywork. Altogether, it could make you suspect that the hoodline has been propped up just a bit in front (it hasn’t). In the side profile, very little has changed, while at the rear new taillamps and a new bumper (actually just some new curves to the plastic covering it) barely step out.

Fresh here and there, but dated inside

As well as the exterior manages to remain elegant and nicely sculpted, the interior is where the SLC simply fails to reach the swoopy, curvaceous, and meticulously detailed highs that have been introduced for the latest versions of the C-Class sedans and GLC crossovers, as well as the smaller CLA and GLA models.

The flat-bottom steering-wheel makes the best attempt to initially convince you that what’s ahead of the driver is fresh; but bring your field of focus ahead of it and there’s not much more to usher the look forward. Mercedes-Benz has upgraded the infotainment screen to 7-inch hardware, yet it remains embedded within the dash, at a time when other Mercedes models have screens that are tablet-like standalone affairs. There’s just a little more brightwork for the buttons, and a few other minor changes like dark gauge facing and some new colors and textures.

As it is, these two cars sound completely different. The SLC, at first blush, puttering around town, sounds a slight bit like the old SLK230 (Kompressor); it’s restrained and mechanical, and the more conservative top-down types are going to appreciate how it’s not too boisterous. The SLC43, on the other hand, can sound a little too boy-racer in Sport+ mode, where exhaust flaps open up a little more—too much, perhaps, for daily driving.

Going through a tunnel in an SLC300, next to an SLC43, the SLC300 sounds restrained, mechanical, and somewhat buzzy, while the SLC43 truly broke out in song, to the point that it drowned everything else out.

Yet we can’t emphasize enough how docile and drivable both of these models are in dense traffic, or forgivable when you lose focus on the right line around a corner, momentarily distracted by stunning views of Monte Carlo.

And then there’s the superb Airscarf system, which pipes just the right amount of hot air onto your neck to keep you warm, with the heated seats, on a cool morning. It’s not a new feature for Mercedes-Benz, but it continues to be absolutely charming in this small roadster, combined with impressive wind buffeting for such a short vehicle.

Through its entire life so far, the SLC and SLK have kept closely to the same template. While these new models don’t push to new ground, they hit a relative sweet spot and realize the potential of the current generation of this roadster—the SLC300 as a responsive year-round touring roadster, and the SLC43 for a more nimble car that from the driver’s seat is almost a full-fledged sports car.

It’ll never quite be one or the other, though. Heritage is its own burden, and for the SLC there’s the double expectation of being a scaled-down counterpart to the SL, and keeping to its format.

As such, the SLC is probably never going to be a clean-slate roadster; but look to the latest C-Class, and we expect some very good things for this model’s future. What’s here now (or at dealerships this summer) is quite great, too.

High Gear Media recently accepted accommodations, travel expenses, and meals in order to get first-drive access to these models and others from Mercedes-Benz.