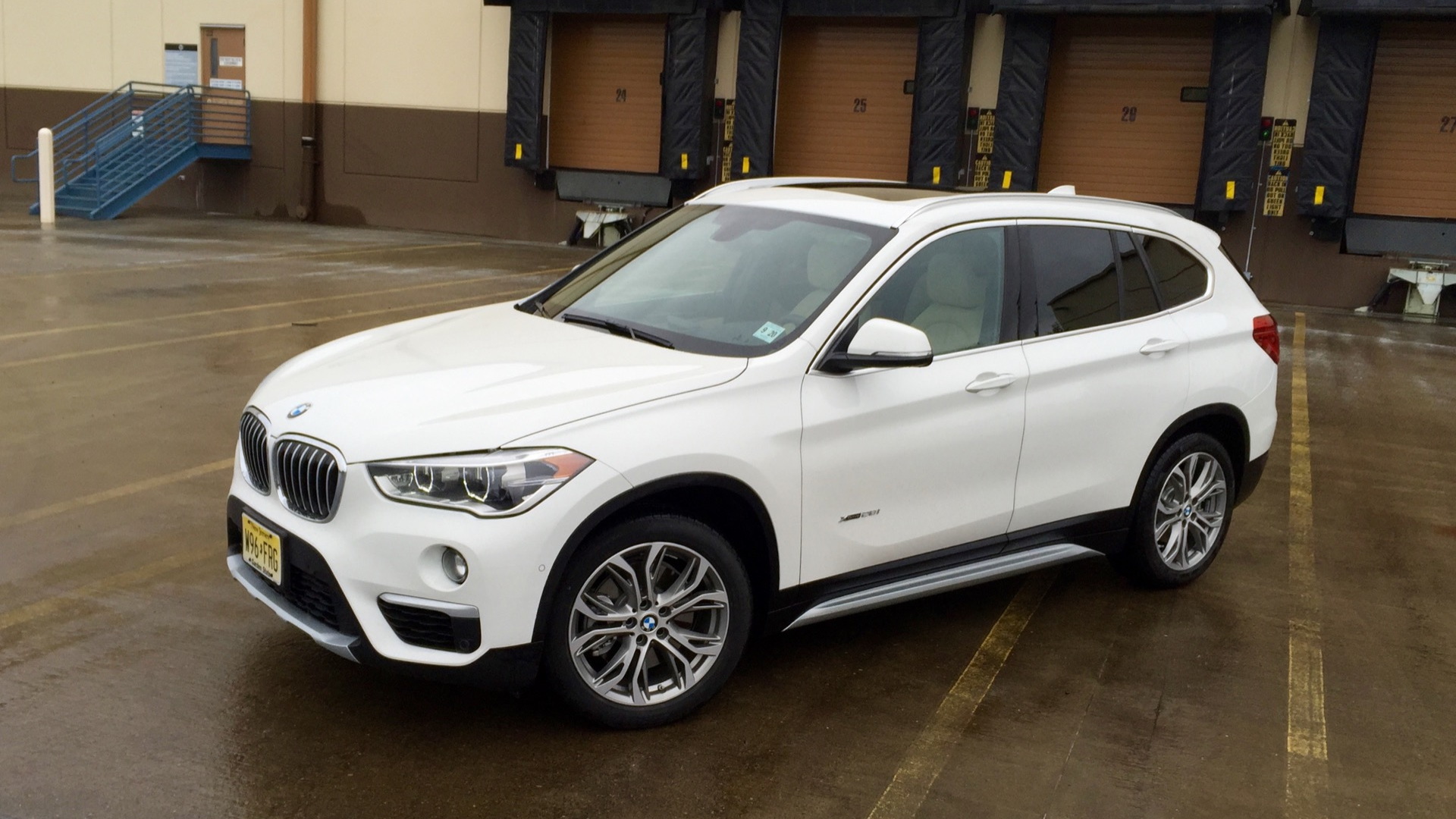 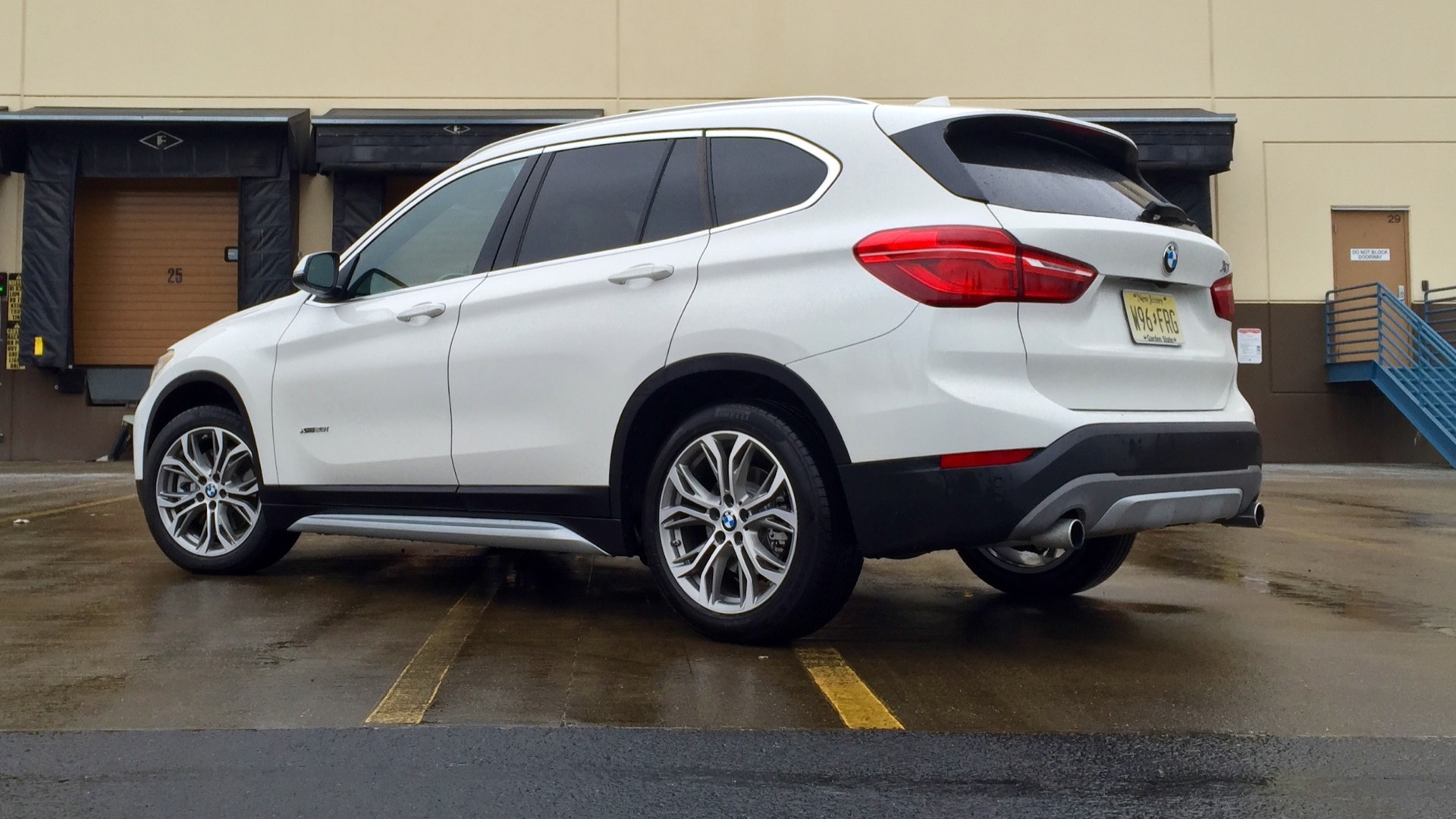 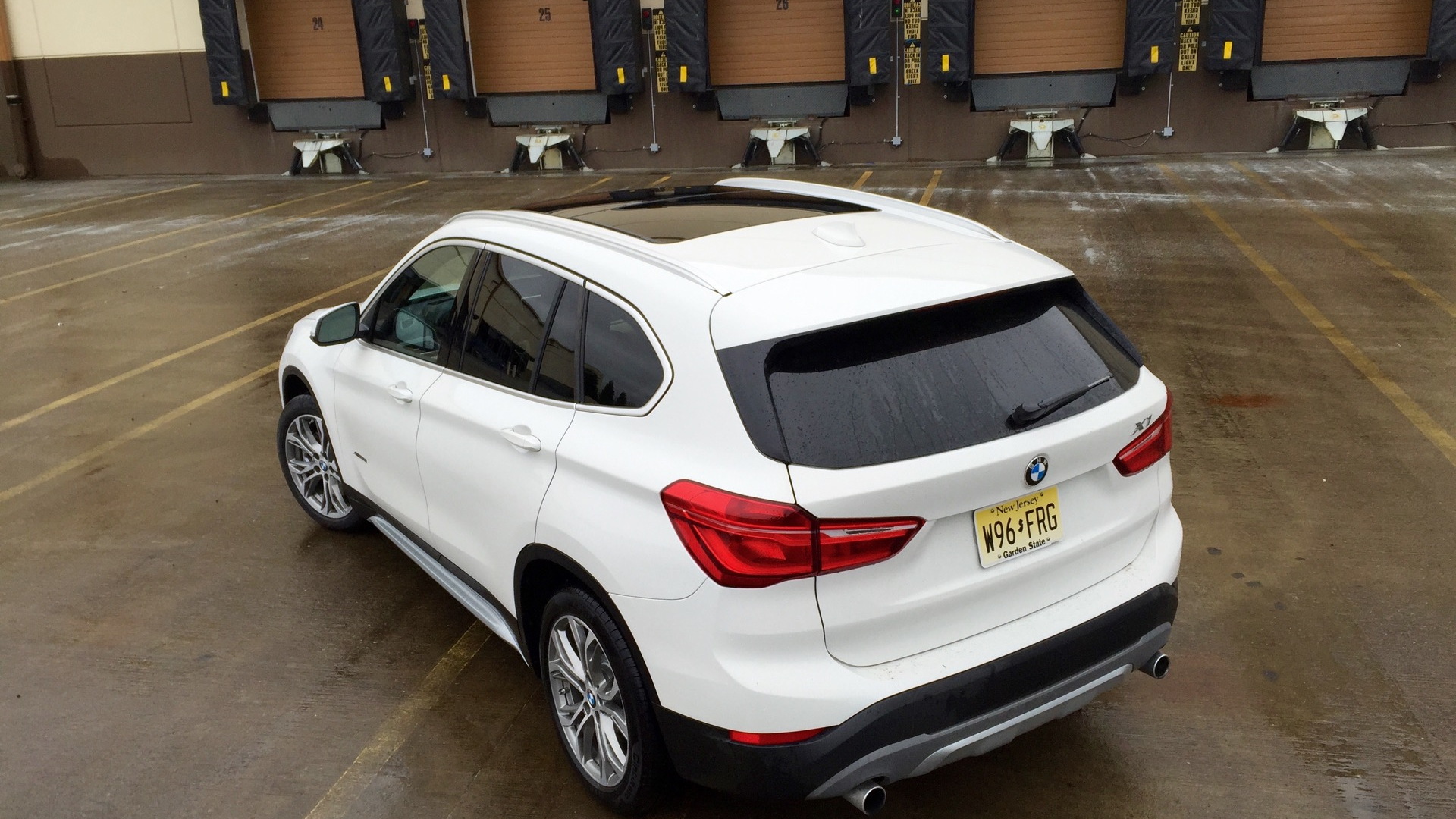 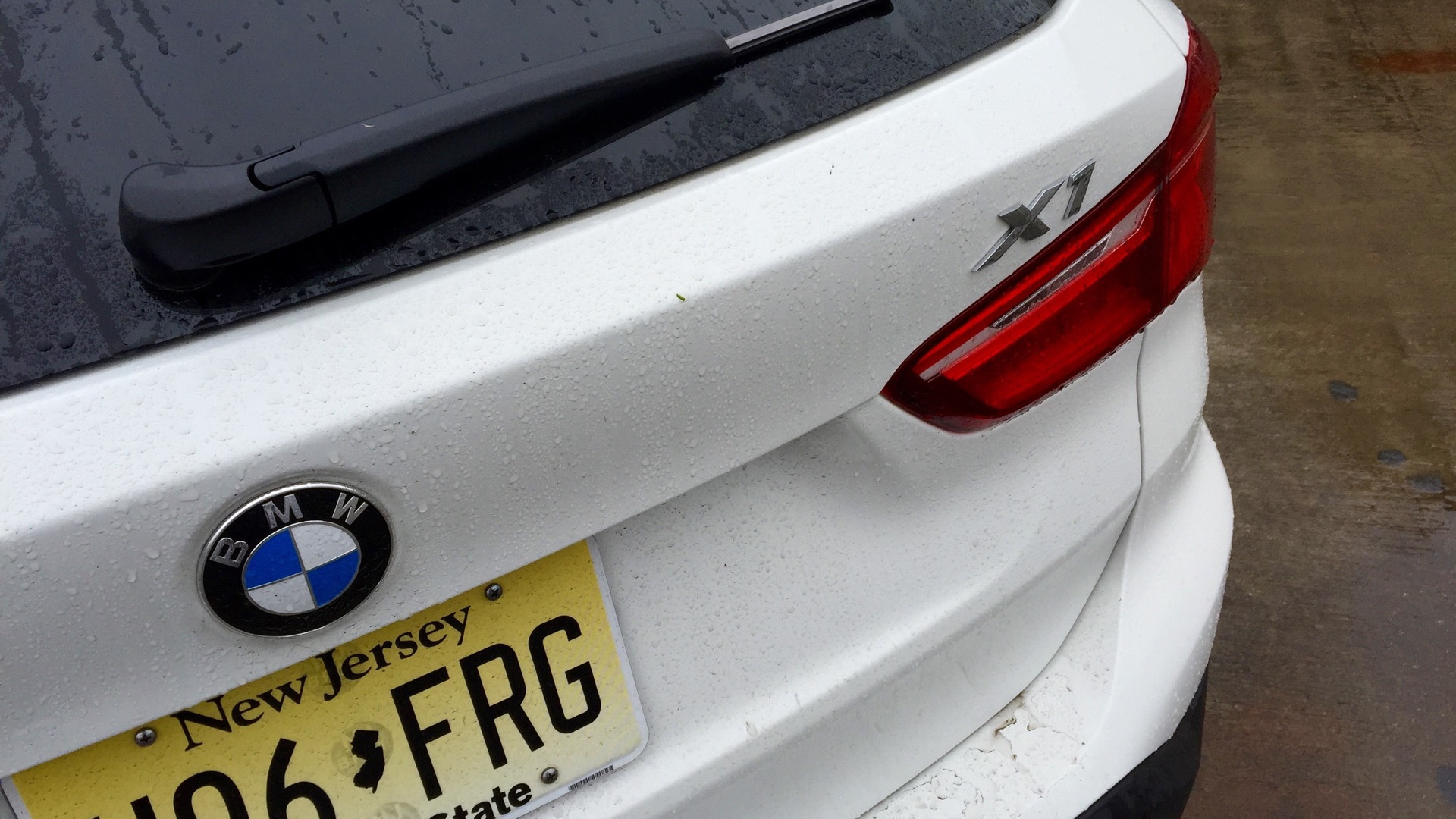 Yet there’s a big asterisk to this: It just doesn’t feel much like a BMW.

In this age when executives and product planners wax poetic about preserving the “brand DNA”—seemingly to no end—this feels like a model that tosses much of it to the wayside. Disguise the styling and obvious bits, and we’d venture to say that even BMW loyalists might not single out the X1 as one of their own.

If you’re a longtime BMW fan, that’s damning praise. You probably appreciate some of the traits that you know will be reliably baked into every BMW model—like nice, near-neutral handling, superb seats, and the feeling that you’re sitting down near the vehicle’s center of mass.

The previous BMW X1 wasn’t a very spacious or space-efficient car; it didn’t ride all that well; and the cabin could be rather noisy; but it handled like a rear-wheel-drive sport coupe—just one that happened to have a tall roof, a hatch, and four doors.

The new 2016 X1 is pretty much the polar opposite. It’s the first front-wheel-drive-based BMW ever; it’s incredibly well laid-out and space-efficient; it rides quietly and comfortably; it makes advances toward unpaved terrain in a way the X1 never did before; and its handling is tidy but uninspiring.

The X1's steering is superb, and it’s what really redeems this model as a pleasant city and suburban roundabout. It tracks well on the highway or in tight alleys, with precise, well-weighted control off center, unwinding smoothly under power in a way that’s relatively rare in front- or all-wheel-drive cars.

It's small-car fuel-efficient, too. Over 140 miles, covering mixed conditions that included an hour in dense urban stop-and-go and an hour in relaxed highway cruising—and nearly everything in between—we averaged 25 mpg according to the trip computer; that nearly ties the X1’s 26-mpg EPA Combined figure (and 22/32 mpg city/highway ratings).

The 2.0-liter turbocharged, direct-injection “TwinTurbo” four-cylinder engine is essentially what’s used in many other places in the BMW (and Mini) lineup, and here it makes 228 horsepower and 258 pound-feet of torque; working with the eight-speed automatic transmission, there’s excellent straight-line acceleration (0-60 in about six seconds) plus strong passing power when you need it.

Through Driving Dynamic Control, you can bring up Sport, Comfort, and Eco Pro modes, which changes the calibration of the electric power steering, accelerator sensitivity, and shift behavior/points. While the lack of a Sport+ mode is pretty telling about BMW’s intent with this model, we found a wider range than usual between these three settings—especially in powertrain respects. Quick transitionary bursts of power are painfully hesitant in Eco Pro, and even Comfort mode sometimes, yet they’re a lot sharper in Sport or if you shift over to the manual-control shift gate.

The X1 has all-wheel drive, or xDrive as BMW calls it, which uses a multi-plate clutch and hydraulic pump system to send up to 100 percent of engine power to the rear wheels when needed—in less than a quarter of a second.

At ease in slick conditions—though not in the enthusiast sense

As we pushed this model hard up a steep, somewhat ran-slicked section of esses, we found the X1’s traction systems to be a little slow to react. Out of each tight corner, the front inside wheel momentarily scrambled, whereas if the system had kept some power to the rear wheels the situation would have been more stable.

Yet we also recently had the chance to drive a different X1 on a damp off-road course that included a mix of rutted two-track and seriously loose, muddy stretches; and there it fared much, much better. The X1’s modest 7.2-inch ground clearance might be a hurdle in some cases, but we loved the confident traction here. There’s no special mode required here; you just keep driving, and the system figures out all the details.

The seating in the X1 takes a bit of getting used to—and even once we’d spent the better part of a week in the X1 we still can’t say we were happy with the way that the front seats are positioned.

From the perspective of a tall, long-legged editor, the X1’s front seats are terrible—as in, not just worse than we’ve encountered in any BMW in our long-term memory, but worse than those of any nearly any current vehicle. They’re woefully inadequate in thigh bolstering, and focused all the pressure on butts in a way that might be fine in a short-distance electric car, but not in a vehicle some might occasionally take cross-country. Back support was also thinner than we’ve encountered in other BMWs.

The back seats may actually be more comfortable. No joke; they’re easy to get into, thanks to generous door cuts, and I had no problem fitting in the outboard positions. It’s a quite narrow vehicle so don’t count on fitting three across.

Oddly, the fully adjustable, reclining and sliding-fore-and-aft seat arrangement is a $300 option. We can’t imagine why you wouldn’t want it.

The dash of the X1 is close to what you’ll see in other BMW models by layout, yet it’s positioned in an entirely different place relative to the front occupants—lower, which combined with the relatively thin pillars, affords you a pretty great view around.

Instruments and displays carry right through from other BMW models; with big, round analog gauges, supplemented by a head-up display, you can get just the right amount of information right in the line of sight. At the center of the dash there’s also the superb, 8.8-inch wide-screen control display, which utilizes essentially the same version of the COMAND interface that’s in BMW’s larger and more expensive models. It has a touchpad controller on top of a twist-push knob, and some voice-command functionality.

The 2016 X1 with xDrive starts at $35,595, but our test car added up to $43,945 and included that plus a Premium Package (LED headlamps, ambient lighting, a panoramic sunroof, garage-door opener, satellite radio, and more) plus the Technolocy Package (BMW Apps support, remote services, and the touchpad), as well as some upgraded trims.

A different, more mature personality in the crowd of small crossovers

Altogether, BMW has clearly taken a different path with the X1 than some of its rivals have with other models. It doesn’t have either the stocky, planted feeling of the Mercedes-Benz GLA or the raised-hatchback impression that you walk away from with time in the Audi Q3. Yet it has space. Lots of it. And getting in and out is super-easy. However the X1 doesn’t impress as driver-centric or performance-focused; it makes the Mazda CX-3 feel sports-car like by comparison.

BMW fans, rather ironically, should probably consider the MINI Countryman for their garage if they like the X1’s form factor. While aesthetically the MINI is in a different place entirely, it manages to keep a little closer to the crisp handling and (perceived) lower seating position that we know and love in BMWs—and makes them feel zoomy and inspiring.

The X1 is more docile, comfortable, and quiet than that, and while it’s a disconnect from the past, the reality check is that it will sell far better than the old X1.

The enthusiasts are just going to have to come to terms with that.