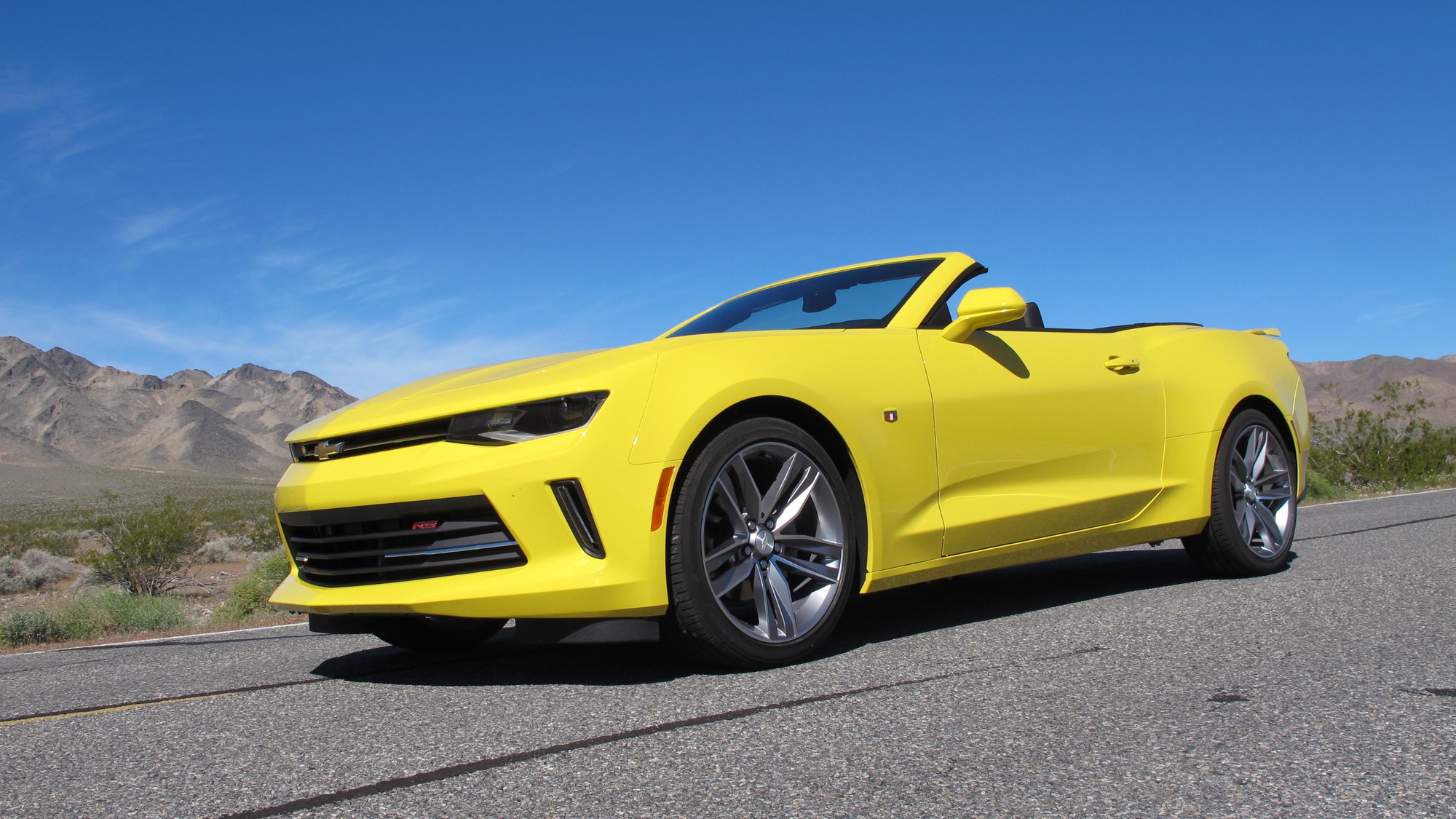 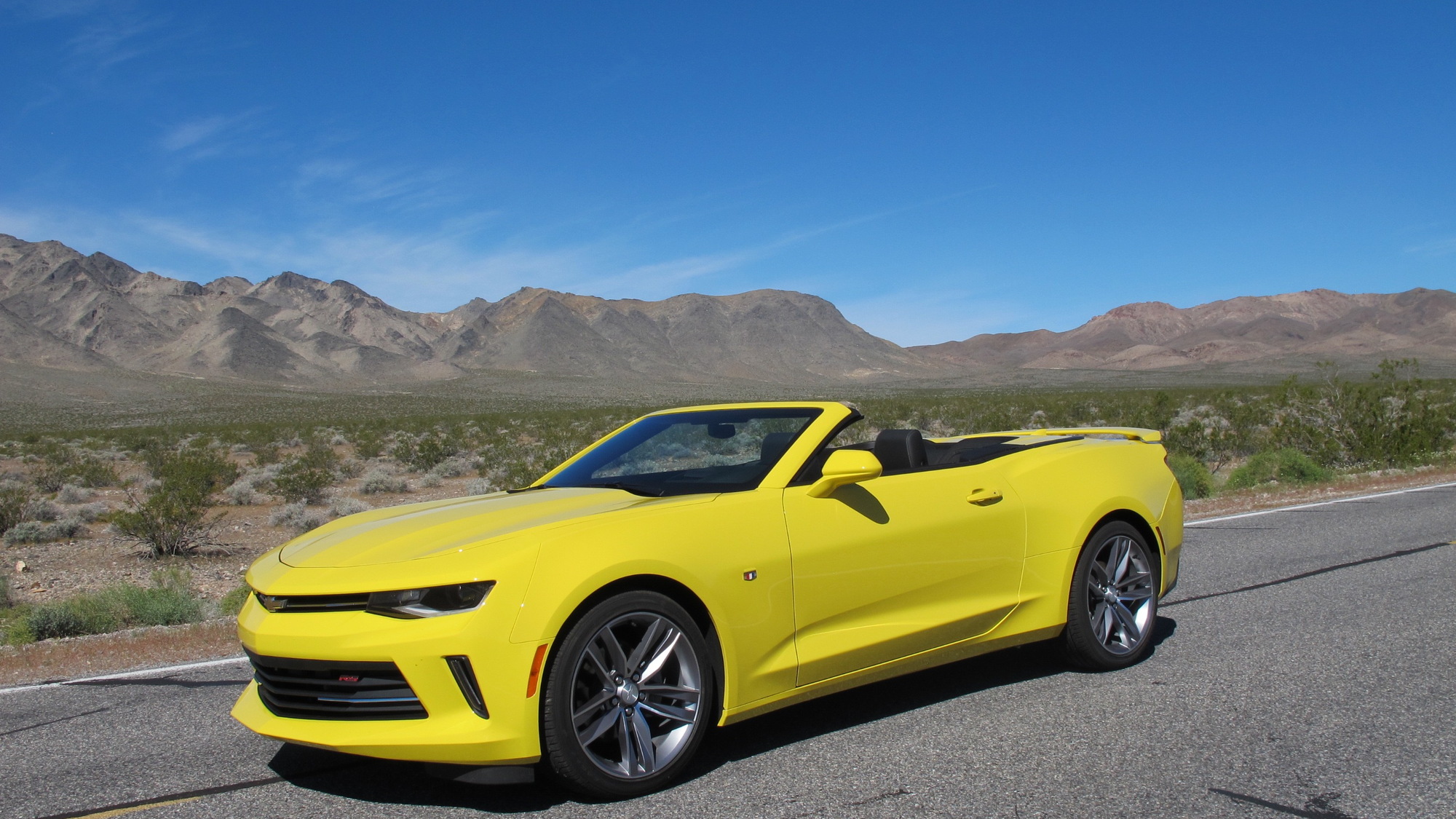 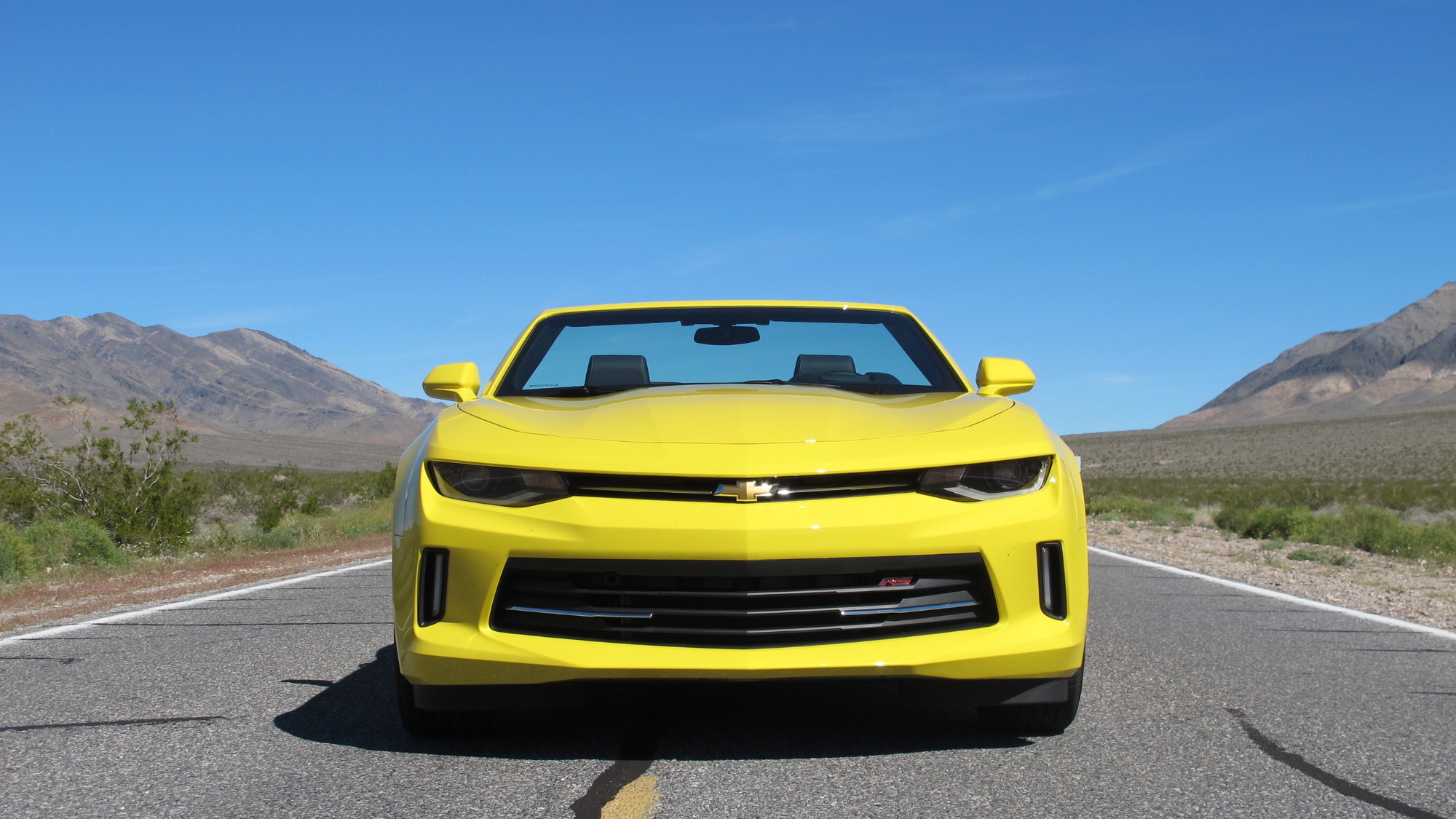 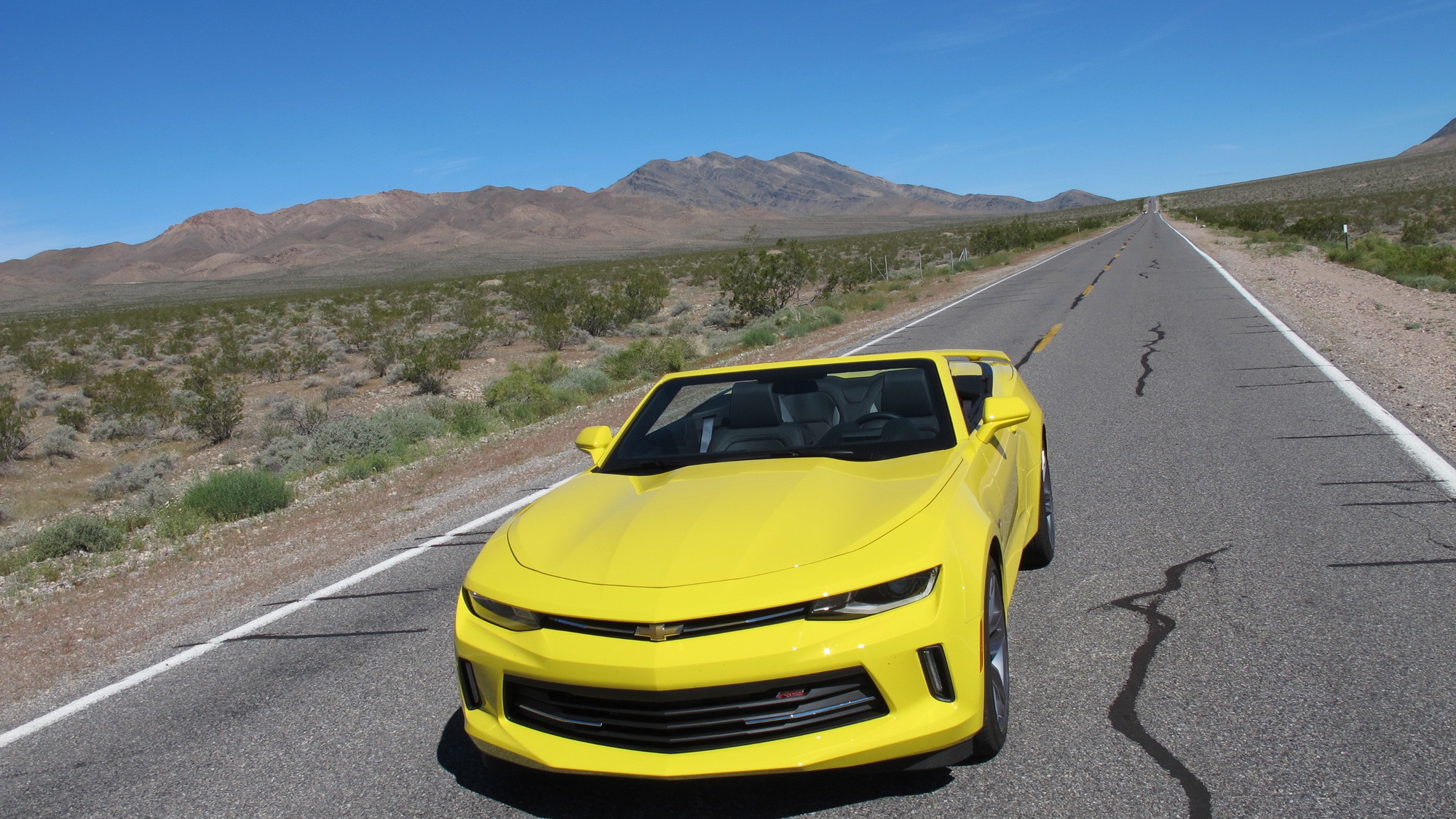 “We were sick of wearing the scarlet letter of mass with the fifth-gen Camaro.”

That’s what Camaro chief engineer Al Oppenheiser told journalists at the launch program for the 2016 Camaro convertible and 4-cylinder.

To reduce mass from the 2010-2015-generation Camaro, Chevrolet switched to the slick Alpha platform already in use on the Cadillac ATS and CTS. “With the Alpha platform, we know we were 225 to 400 pounds lighter, so we shed that scarlet letter right away,” Oppenheiser said.

Model-for-model, the 2016 Camaro is actually down by at least 223 pounds, but Chevy was able to cut total weight by as many as 390 pounds by going with a 4-cylinder as the base engine. That engine is a turbocharged 2.0-liter that spins out 275 horsepower and 295 pound-feet of torque while delivering 31 mpg on the highway.

But cutting the top off the coupe to create the convertible required adding weight back in to increase the rigidity of the body. Chevy engineers developed 11 different braces to strengthen the droptop’s platform, using all 11 to deal with the extra weight and power of the available V-8 and fewer for the lighter V-6 and 4-cylinder models.

Jim Karlavage, Camaro performance engineering manager, says removing the top reduced torsional stiffness by about 35 percent, but those braces add 15 percent back in. In total, the new convertible is 10 percent stiffer than the fifth-generation ragtop, and Karlavage says it’s about on par with the 2015 coupe. That seams like a stretch, but the point is that this is one sturdy convertible.

To show off just how solid the convertible is and demonstrate the weight savings benefits of the 4-cylinder engine, Chevrolet invited Motor Authority to drive the new droptop and 4-cylinder models at Spring Mountain Motorsports Ranch in Pahrump, Nevada.

The day started with a track exercise to show off the power and handling of the new 4-cylinder coupe. Chevrolet cycled journalists through a 2015 Camaro V-6, a 2016 Mustang with its base V-6, and two 2016 Camaros with the 4-cylinder, one with the 6-speed automatic transmission and the other with the 6-speed manual.

The back-to-back-to-back comparison highlighted a few strengths of the Camaro and one of the Mustang. On the track, the last-generation Camaro felt heavy and a bit reluctant to turn in, and the Mustang was floppy and somewhat unpredictable. However, the new Camaro felt planted and was very willing to turn in and then rotate. It’s important to note that none of these cars was outfitted with a sport suspension. A Track Pack Mustang is probably much more controlled.

The lighter front end enabled by the inline-4 makes the already playful Camaro feel even more agile. However, there isn’t as much ultimate grip as the V-6- or V-8-powered cars due to suspension settings, and tire size and compound. The steering is also not quite as satisfying as it is in the Camaro SS. That’s because it lacks the Track mode that adds a bit more steering heft.

Of the three engines we drove, Ford's 3.7-liter V-6 felt the strongest, offering more power across the rev range than Chevy’s last-generation V-6 or the current turbo four. While Ford offers a turbocharged 4-cylinder as well, it sells the V-6 as the base engine and charges more for the four. Chevy, on the other hand, makes the 4-cylinder the base engine and charges more for the six. That leads us to believe that Ford’s 4-cylinder turbo may offer more grunt than Chevy’s forced-induction 4-cylinder.

But the Camaro’s turbocharged 2.0-liter is no slouch. Chevrolet quotes a 0 to 60 mph time of 5.4 seconds and notes that it matches the time of the big-block V-8-powered 1970 Chevelle SS 454 from the muscle car era. Not bad for 122 cubic inches. The old saying goes: “there is no replacement for displacement.” Apparently, there is: time and forced induction.

MUST SEE: Here are 5 things to avoid doing with a manual transmission: Video

We also found that the 2.0 works well with both transmissions. The manual has tidy throws and the clutch engagement feels more natural than it does with the 6.2-liter V-8. The automatic shifts smoothly and is responsive enough that most drivers won’t regret choosing it over the manual.

The one minor drawback of the turbo engine is the sound. It emits a low howl when pushed but is otherwise very docile. Most of us like a little more spice with our pony car gumbo, and the V-6 and V-8 deliver that. Nonetheless, the turbocharged Camaro isn’t a sterilized version of GM’s excellent pony car.

Top down to Death Valley

After the track session, we hopped into convertibles and made the 180-mile round-trip to Death Valley and back. The Camaro’s new cloth convertible top immediately revealed itself as an impressive piece of machinery. It is a power unit that folds or unfolds in 18 seconds with no need to pull a handle or turn a latch. It can be operated while driving at speeds up to 30 mph, and it can be dropped using the remote keyfob from outside the car. It also comes with a hard tonneau that powers into place and tidies up the rear deck. This isn’t some cheapo top. It would be right at home on a BMW.

Of course, the convertible top comes at a hefty premium of $7,000. The base price for a Camaro convertible with the 2.0 is $33,695 compared to $26,695 for the coupe. That's quite a bit but many will find it worth the cost for the joy of top-down driving and the fact that it fixes the Camaro's notorious outward visibility issues.

On the desert highway, the convertible body felt strong, with no detectable cowl shake. All the work Chevy has done to reinforce the body appears to have paid off in a solid structure, though I will reserve final judgment until I can see how the car responds when I get it on some pockmarked Midwestern roads.

Until then, however, the Camaro convertible’s sturdy structure makes it almost as agile as the coupe, with the added bonus that you can actually see out of it. The available turbocharged 4-cylinder also combines power with playfulness and thrifty fuel economy. Even though a 4-cylinder seems anathema for a pony car, and a convertible reduces body rigidity, the 2016 Camaro wears them both well. I see no need for a scarlet letter here.