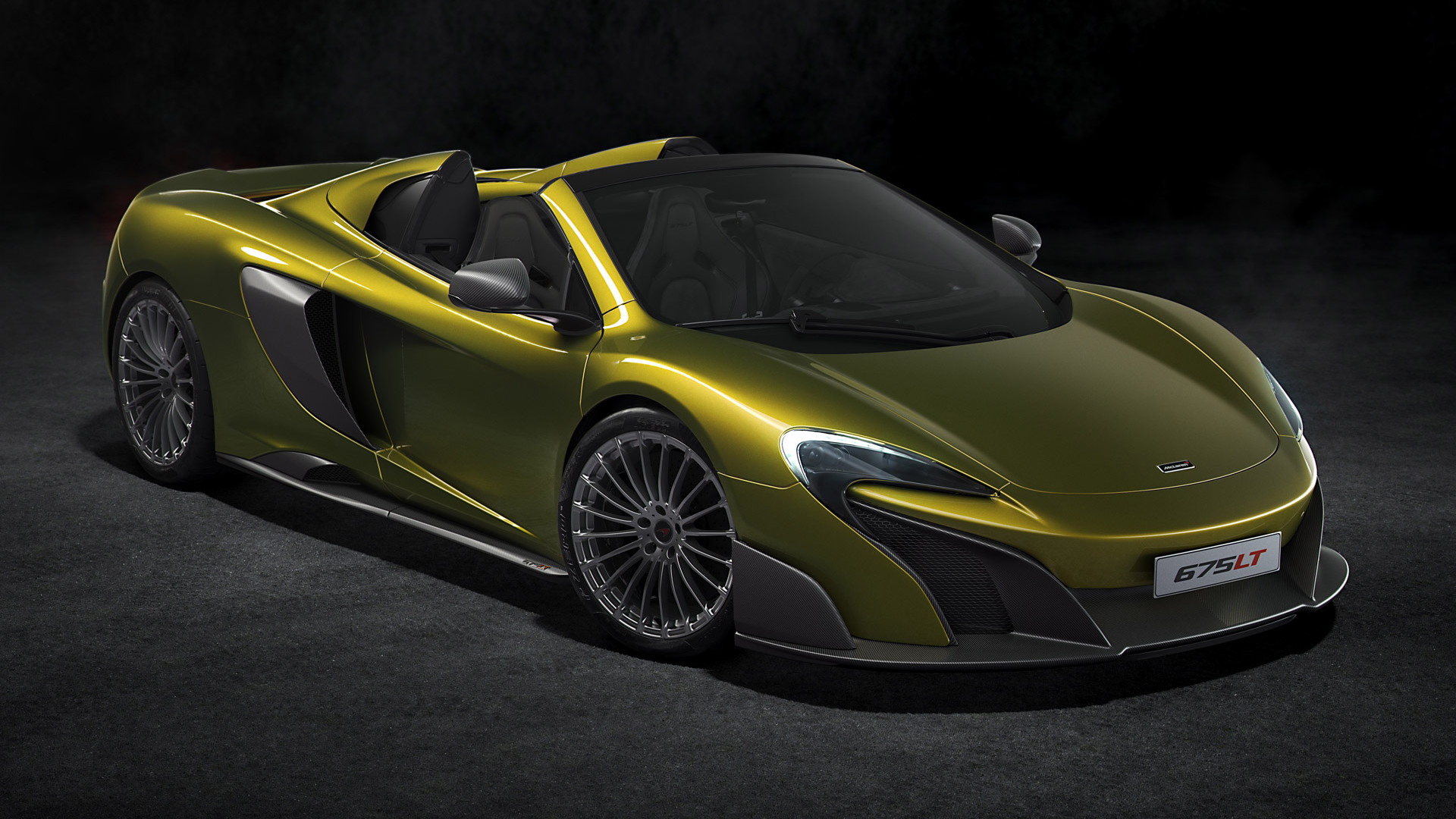 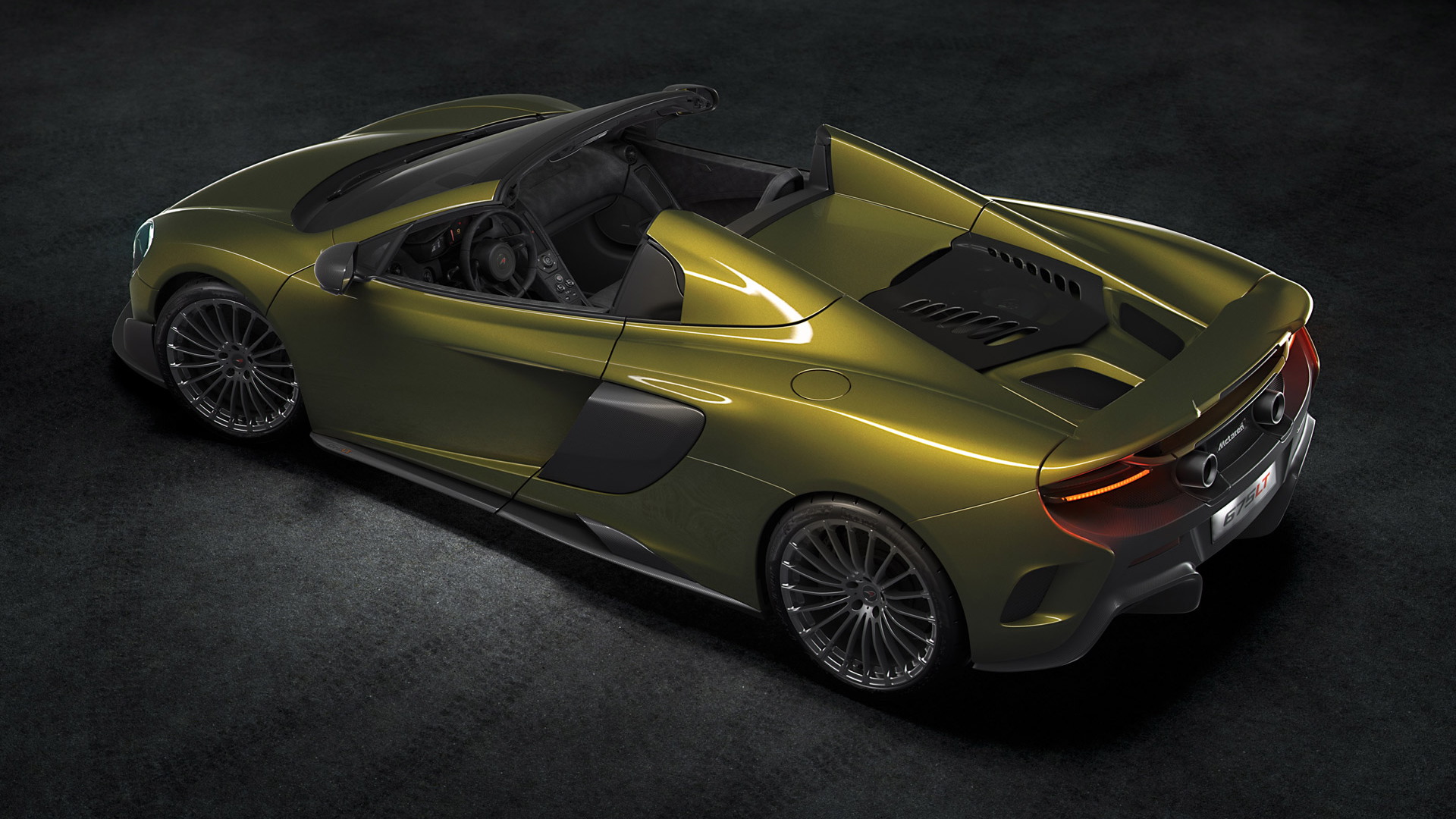 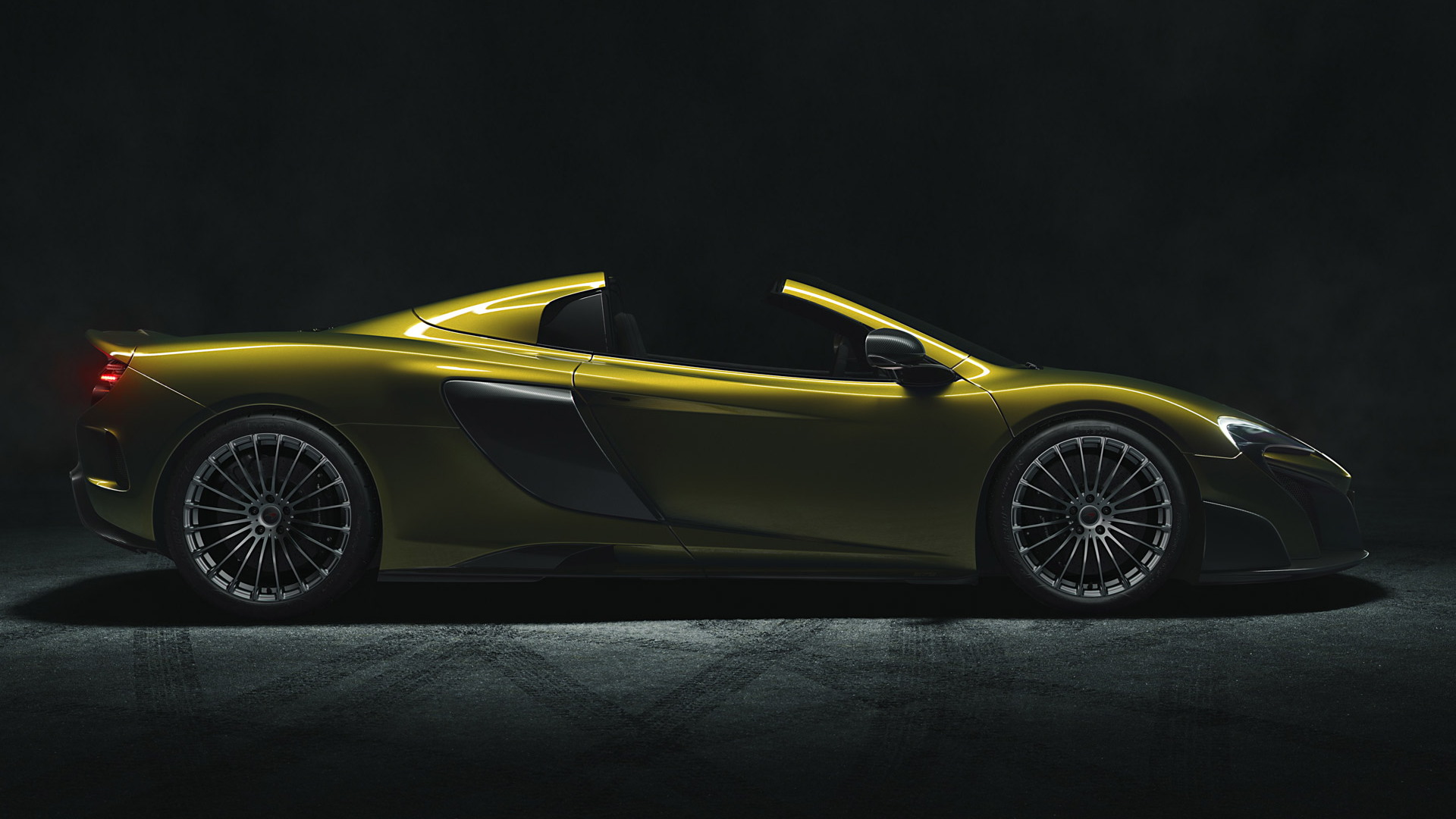 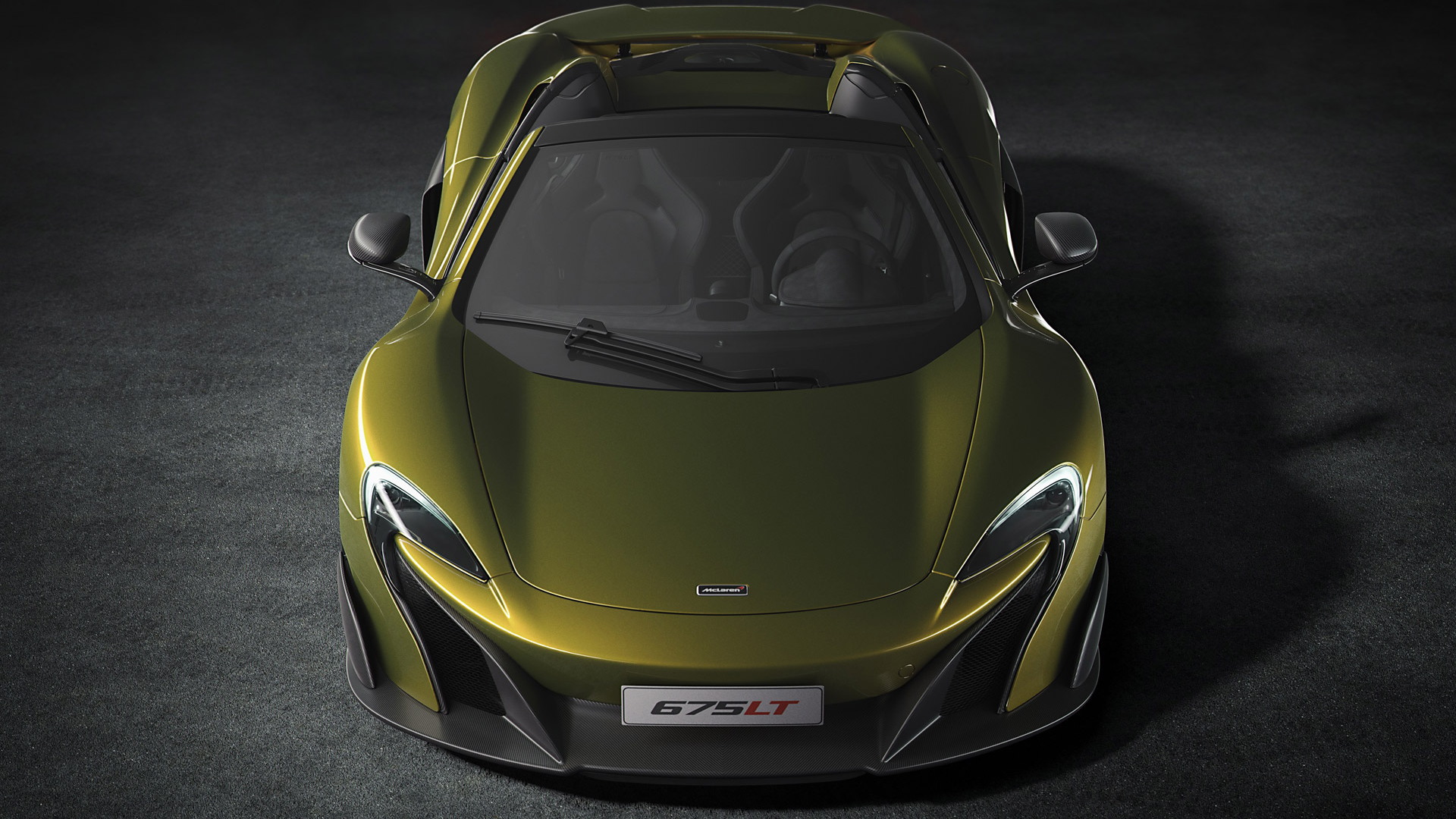 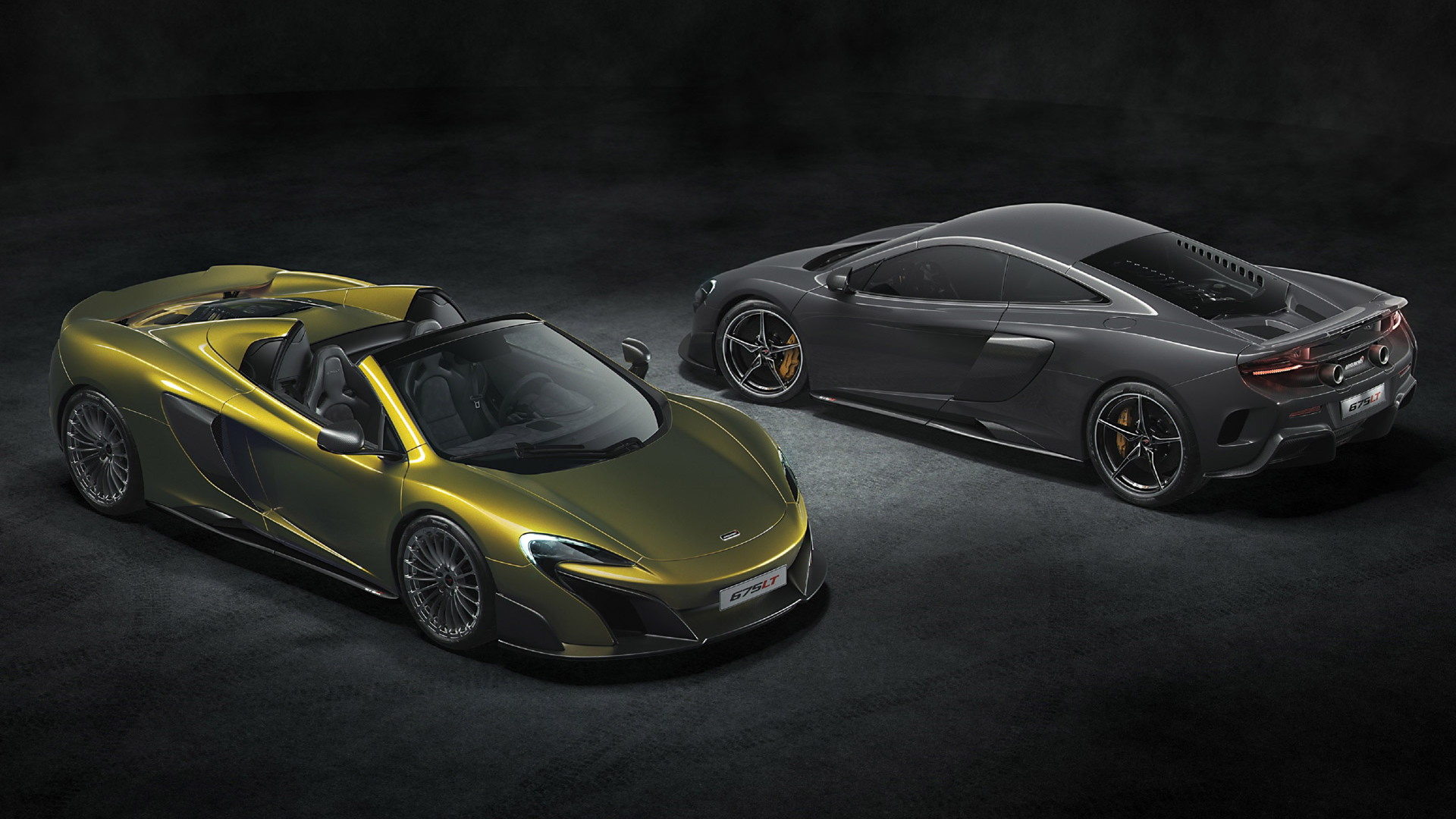 McLaren’s 675LT is billed as the most track-focused variant in the Super Series lineup, but that hasn’t stopped the British automaker from launching an open-top version of the car. The 675LT Spider made its debut overnight, and just like the coupe it comes packing a hellish 666 horsepower.

The car was presented in a new color called Solis, and it rides on a new set of 20-spoke forged alloy wheels measuring 19 inches across up front and 20 in at the rear (a 10-spoke set is standard and another 5-spoke set is available). The standard rubber is Pirelli’s track-focused P Zero Trofeo R and the set on the 675LT Spider has been specifically designed for the car.

Under the skin of the 675LT Spider sits the familiar twin-turbocharged 3.8-liter V-8 found in all modern McLaren road cars. Here, it’s tuned to deliver 666 horsepower and 516 pound-feet of torque. Some changes have been made to the powertrain, including more efficient turbos, detail design changes to the cylinder heads and exhaust manifolds, new camshaft and lightweight connecting rods, and a faster-flowing fuel pump and delivery system. Drive is to the rear wheels only, via a seven-speed dual-clutch transmission with a system designed to limit torque in lower gears to aid launches.

Thanks to lightweight construction, the car weighs around 220 lb less than the already lithe 650S Spider. McLaren quotes a dry weight of just 2,800 lb, which is around 88 lb heavier than the coupe because of the roof system. Carbon fiber is used for much of construction, while titanium is used for the exhaust system and polycarbonate for the engine cover. The retractable hard-top roof, also made of carbon fiber, stows below a color-coded tonneau cover. Exposed bodywork across the rear deck and below the rear wing aids engine cooling, while louvers in the flared rear bumper optimize pressure levels. 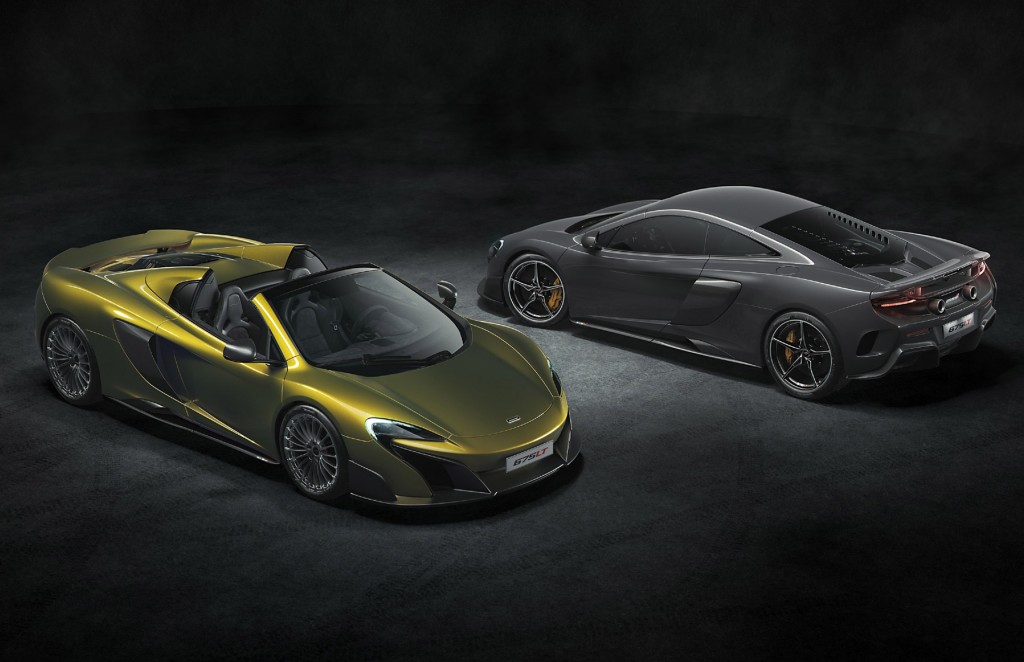 The LT designation, of course, is a nod to McLaren’s F1 GTR Long Tail race car, and the 675LT Spider utilizes a longer rear section which boosts downforce. The car’s air brake is also twice as large as the one on the 650S Spider. It is integrated into the design of the flowing rear wings and despite the larger size carbon fiber construction ensures weight is actually reduced. At the front, there is an extended front splitter flanked by front wing end plates, while carbon fiber door sills run along the lower edge of the body, flowing in to a smaller air intake ahead of the rear wheels. This sits below the more pronounced side intake, which feeds cool air into an enlarged side radiators.

Additional changes over the 650S Spider include new lightweight springs and a wider track—increased by 20 millimeters. Spring rates are the most track-focused for the Super Series range, with stiffness increased 27 percent at the front and 63 percent at the rear, providing a more rearward balance and allowing for a 40 percent increase in downforce over the 650S Spider.

Performance, as you may have guessed, is scintillating. Acceleration from 0-62 mph takes just 2.9 seconds, while 124 mph will come up after just 8.1 seconds. The top speed is 203 mph. Note, the coupe is a tick faster thanks to a more aerodynamically optimized body.

Like it did with the coupe, McLaren is limiting 675LT production to just 500 units worldwide. It’s not clear how many have been earmarked for the United States but we can confirm pricing starts at $372,600. Deliveries will start in the summer.