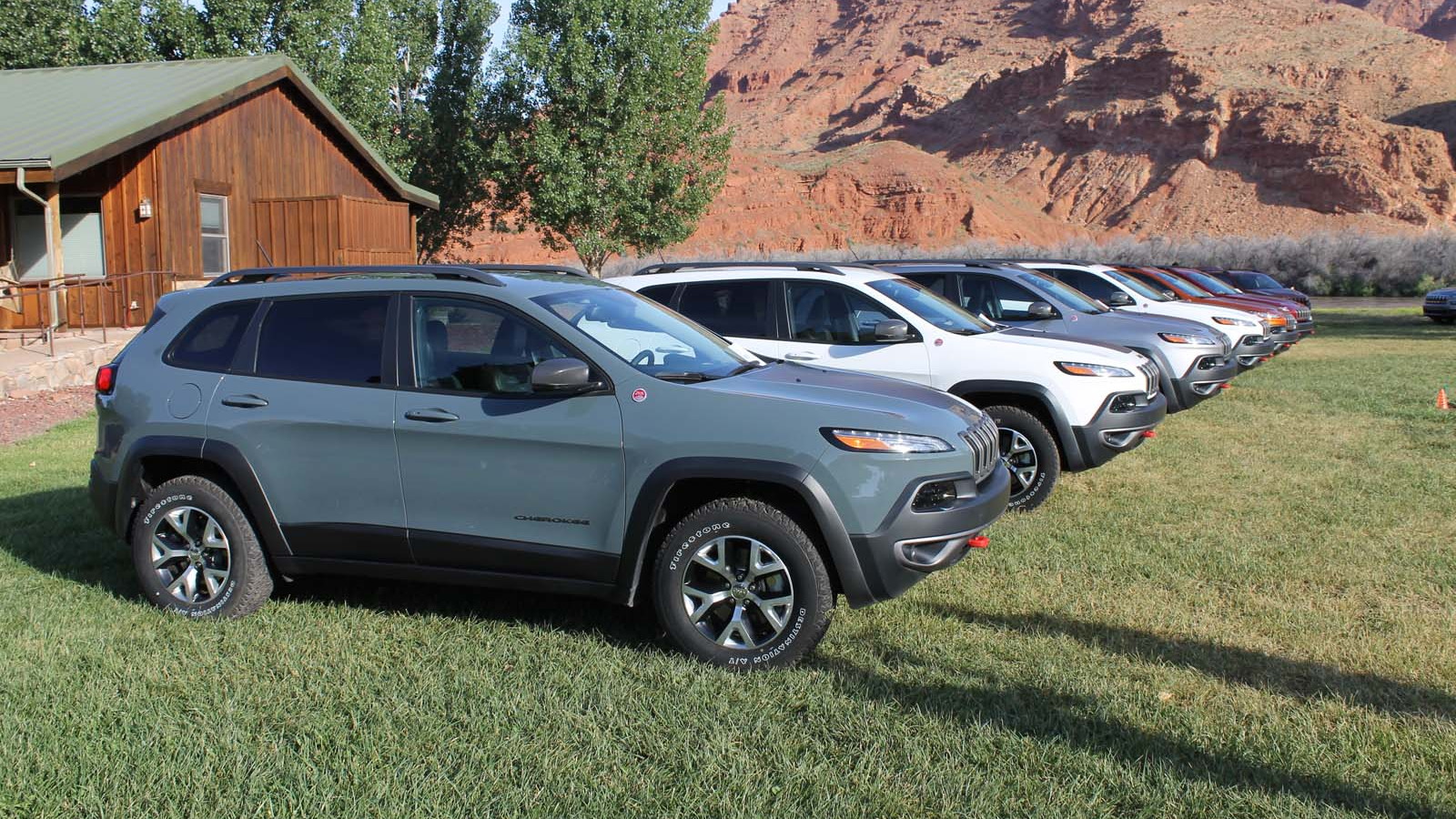 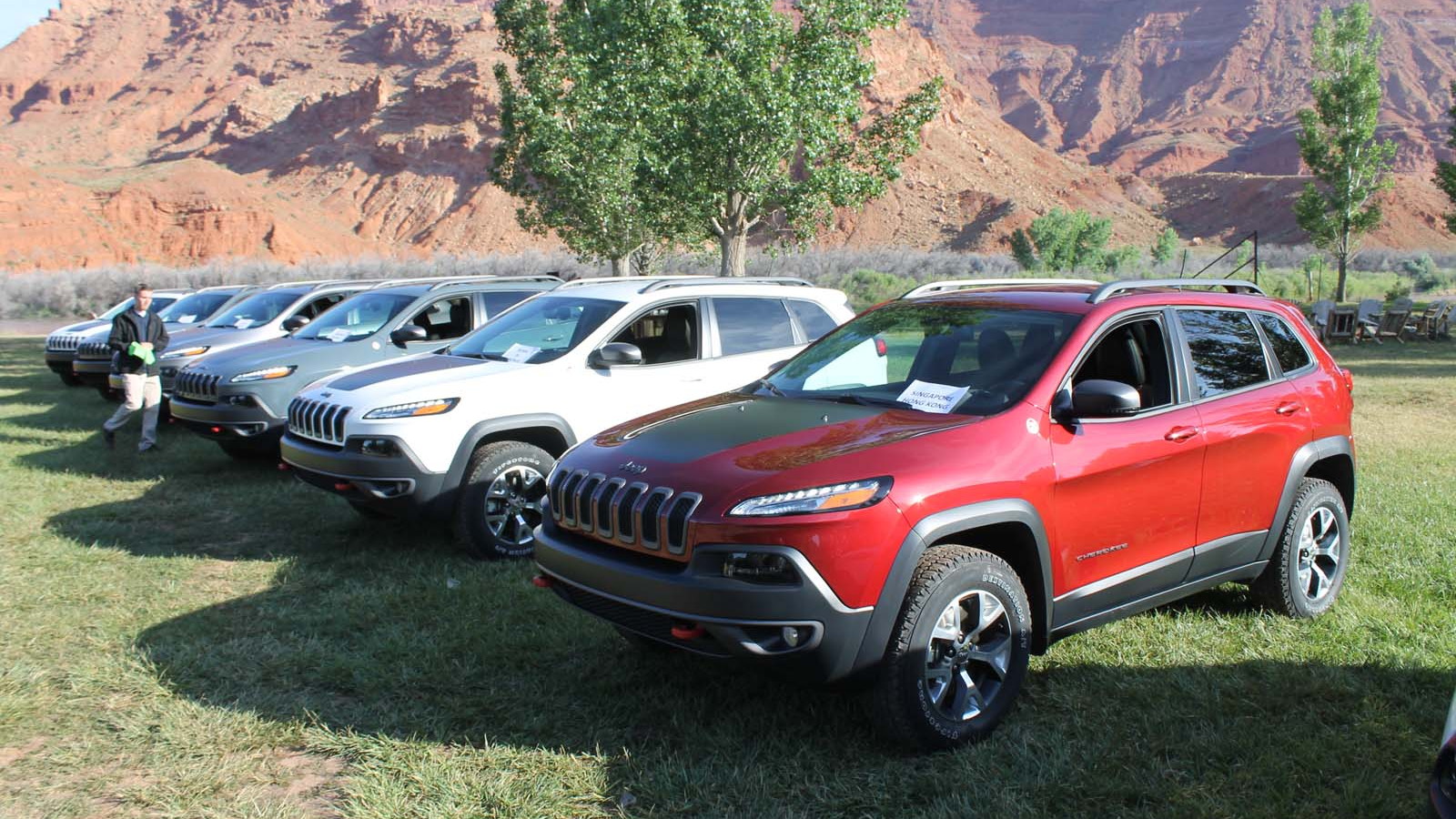 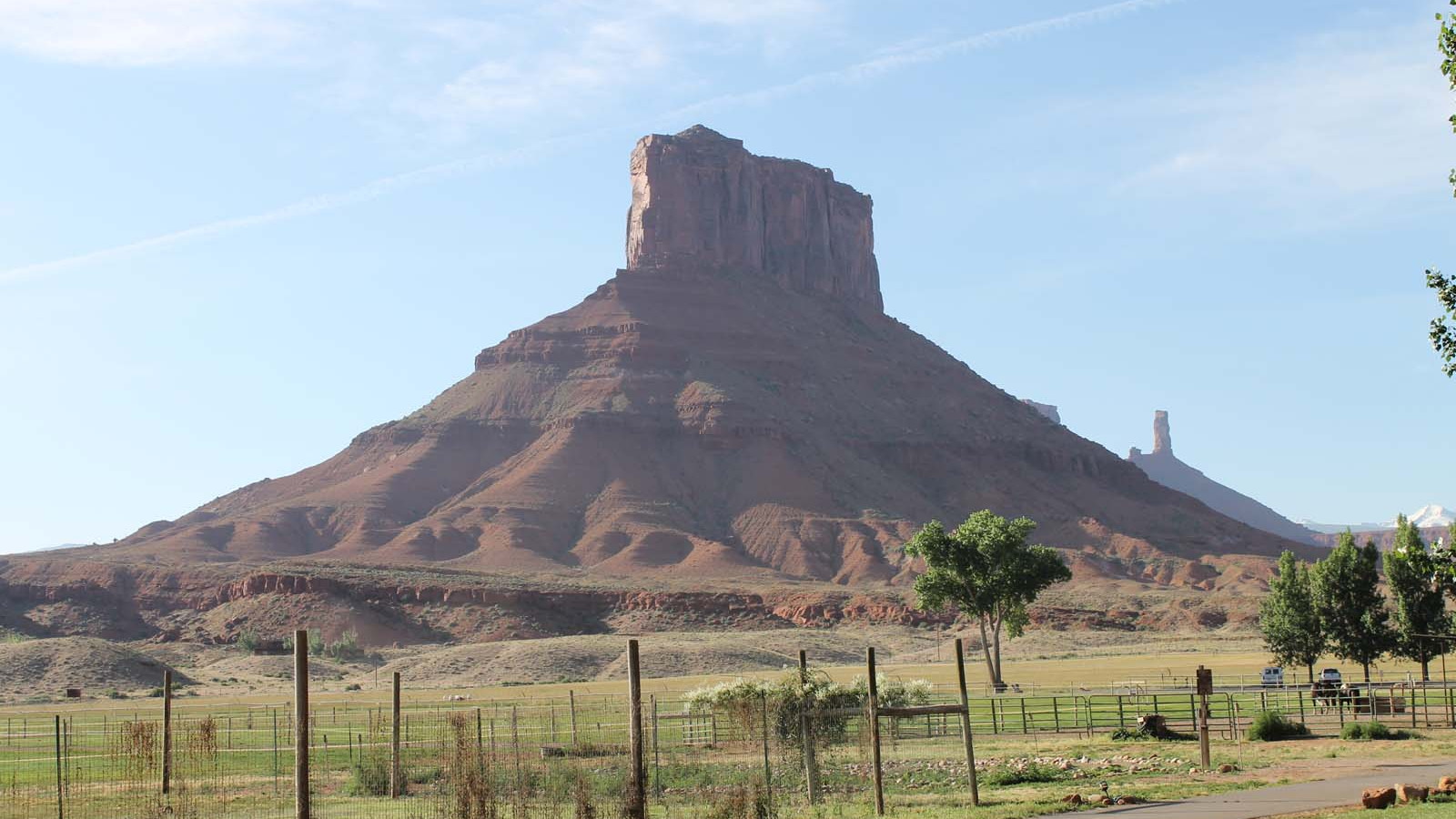 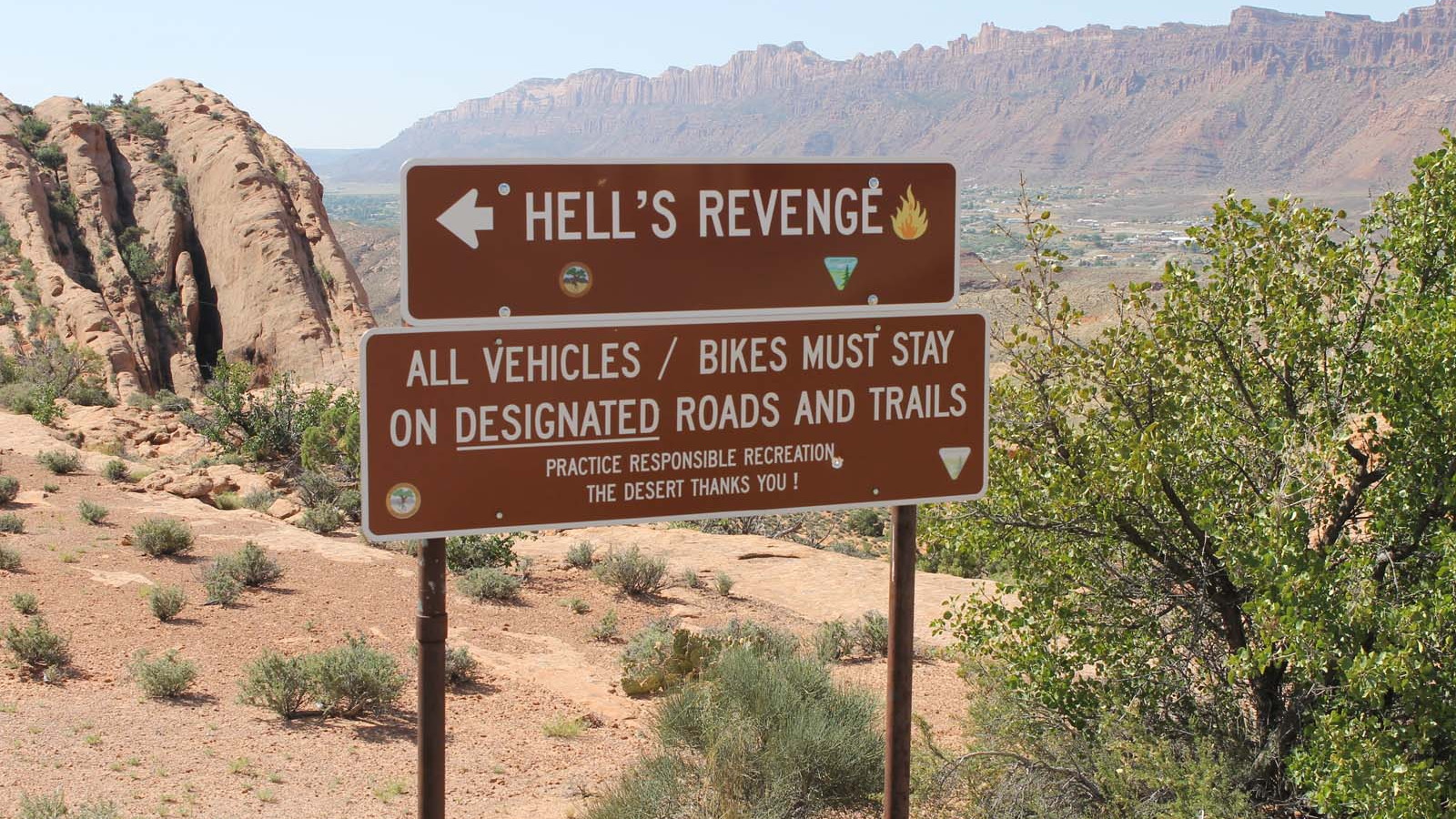 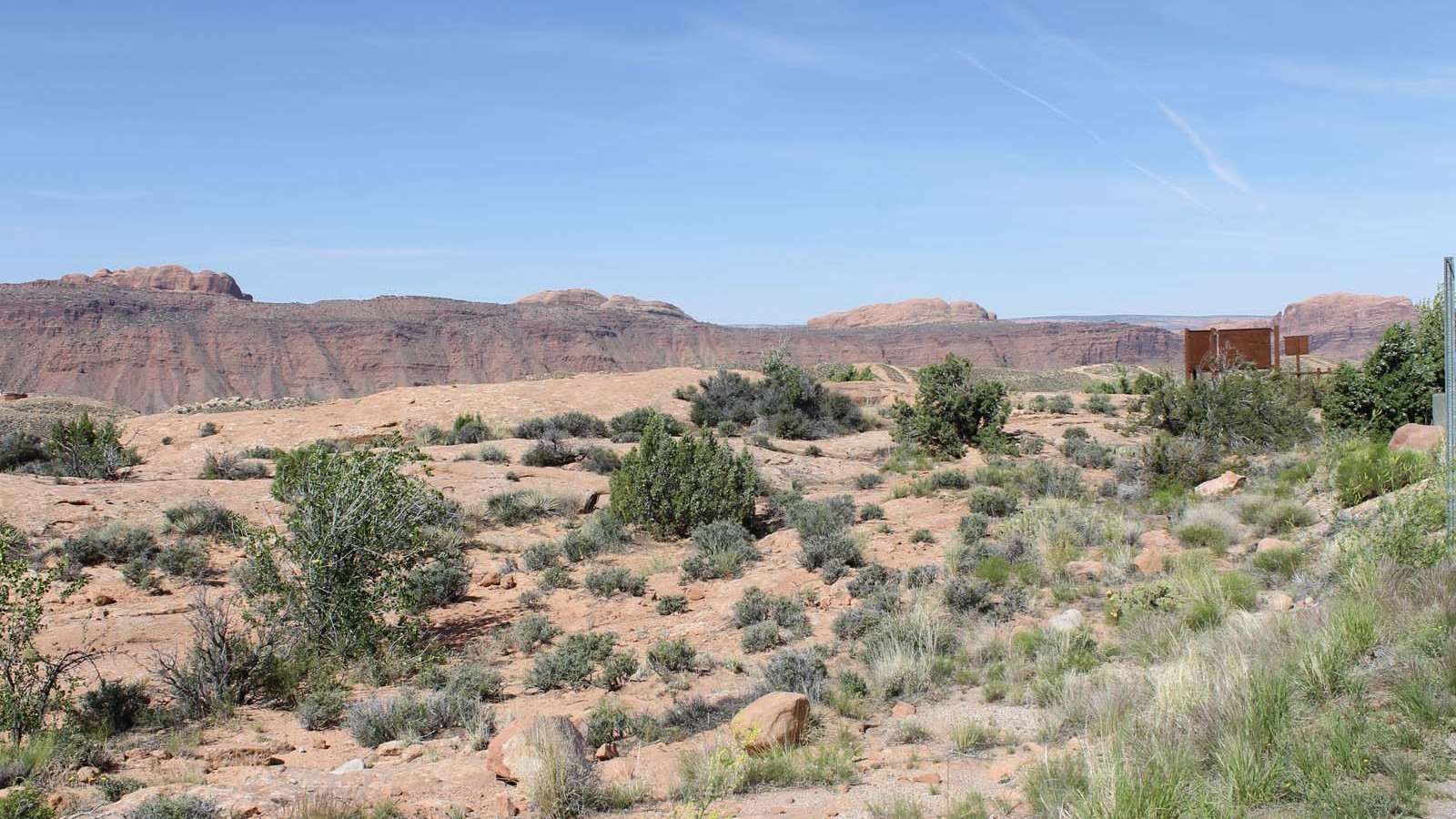 Off to my left, I could see a Jeep Jamboree spotter. He was on top of a boulder and giving the thumbs up, encouraging me to keep climbing. That's when I laughed and said, "Nobody who buys a Cherokee is going to take it up stuff like this ever."

I didn't know who I was talking to.

We were at the entrance to Hell's Revenge with the Jeep Experience Moab 2015 convoy, and my co-driver Aaron had hopped out to shoot pictures. The sign at the base of the trail says the "steep climbs require steel nerves and advanced driving skills"—and I'm uninclined to argue. But in crawl mode, with its differential locked, the Trailhawk edition Cherokee made easy work of the ascent, the 3.2-liter Pentastar V-6 pulling the rig along with minimal drama.

Moab is sacred ground for Jeep. For nearly half a century, the brand's engineers and enthusiasts have flocked to the annual Moab Easter Jeep Safari to prove their machine's mettle on the desert's unforgiving landscape. And these perilous paths are the same trails where the company tests the five areas where a Jeep must excel—traction, ground clearance, maneuverability, articulation, water fording—to wear its coveted Trail Rated badges.

After scaling the rocks marking the entrance to Hell's Revenge, I picked up Aaron, and we spent the next two days driving through what's unquestionably some of the most spectacular country in the United States. 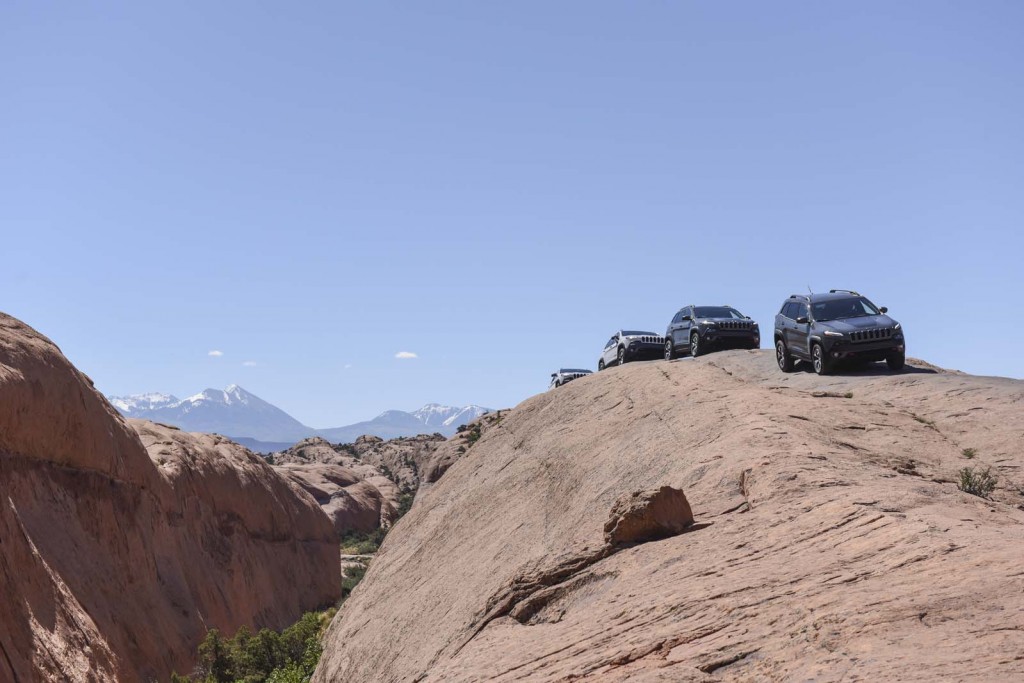 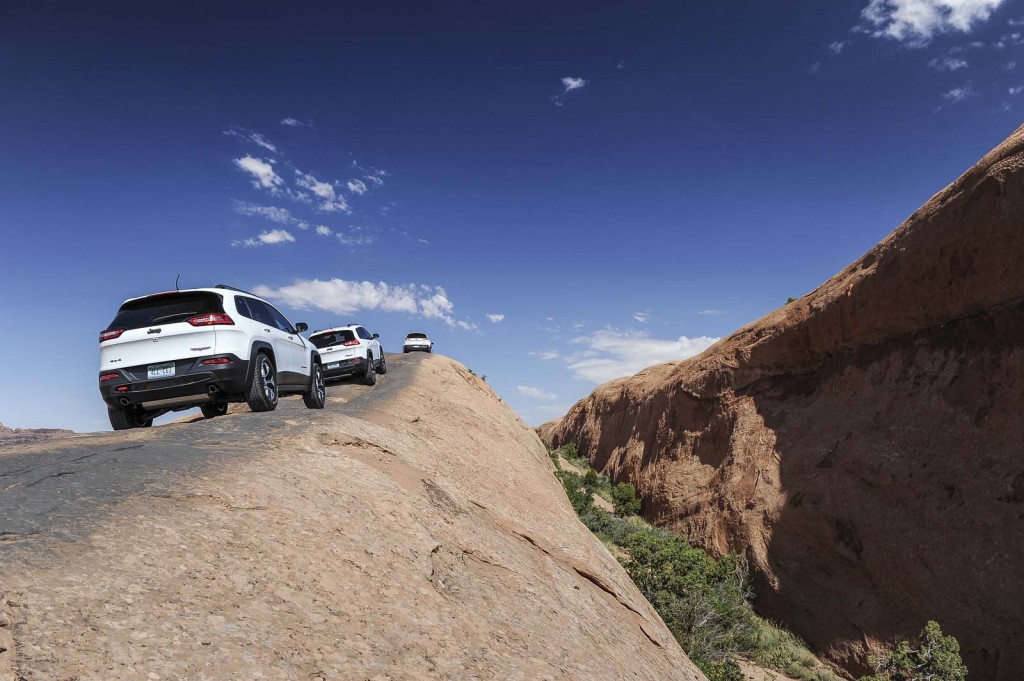 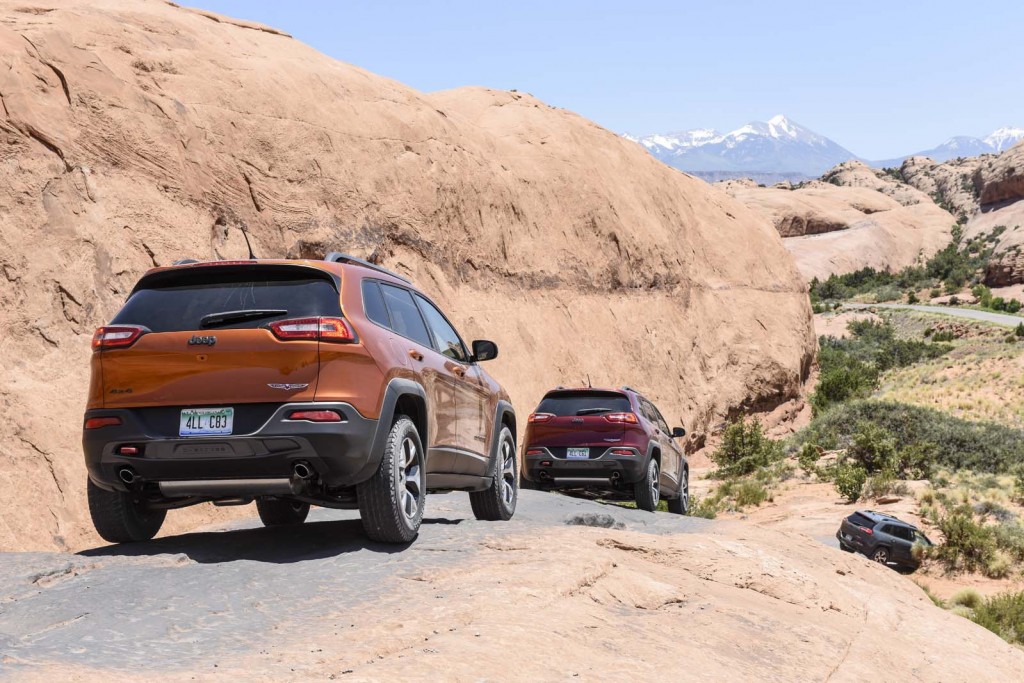 Now, there's certainly something to be said for unplugging and enjoying scenic views without modern distractions. But I've chosen to spend the majority of my adult life in environments where it's impossible to throw a rock without hitting a taco stand or Thai restaurant. So while it was slightly surreal to be inside an air conditioned cabin listening to Hip Hop Nation via satellite radio, it was hardly unpleasant.

And technology plays an obvious role in the Jeep's off-road prowess.

Twenty-five years ago, navigating some sections we tackled would have required a dedicated rig. Its most electronically sophisticated component would have been a tape deck. But things have come a long way since blunt instruments like power and beadlocks were the only weapons available in the off-road tool box. Obviously, along with Sport, the Jeep features traction settings for various environments—Snow, Sand, Mud or Rock—allowing it to work smarter instead of harder on slippery surfaces.

Before we set out, one of the chassis engineers reminded me to experiment with the Select-Speed Control, an off-road cruise control incorporating hill ascend and descend functions, allowing a constant speed over tricky terrain with "minimal driver input." Basically, it relegates the driver's role to hanging on and steering. I forced myself to keep my feet away from the pedals while I tried it, and used the controls on the wheel to play with the speed. Overall? It's as unsettling as it is impressive.

Not something I'd engage when rock crawling, but again, impressive.

Of course, all the electronic nannies in the world aren't going to save you from ripping a bumper off if you hit a burly incline. So the Trailhawk features 8.7 inches of ground clearance, factory skid plates and revised front and rear clips allowing approach and descent angles of nearly 30 degrees. And it's safe to say we took advantage of every degree on the trip.

Because as we made our way to Dome Plateau Overlook to enjoy lunch and the view from 5,700 feet, there were plenty of points where it looked it looked deceptively like I was going to stick the Jeep's pointy nose into the trail like a lawn dart. But it never happened. 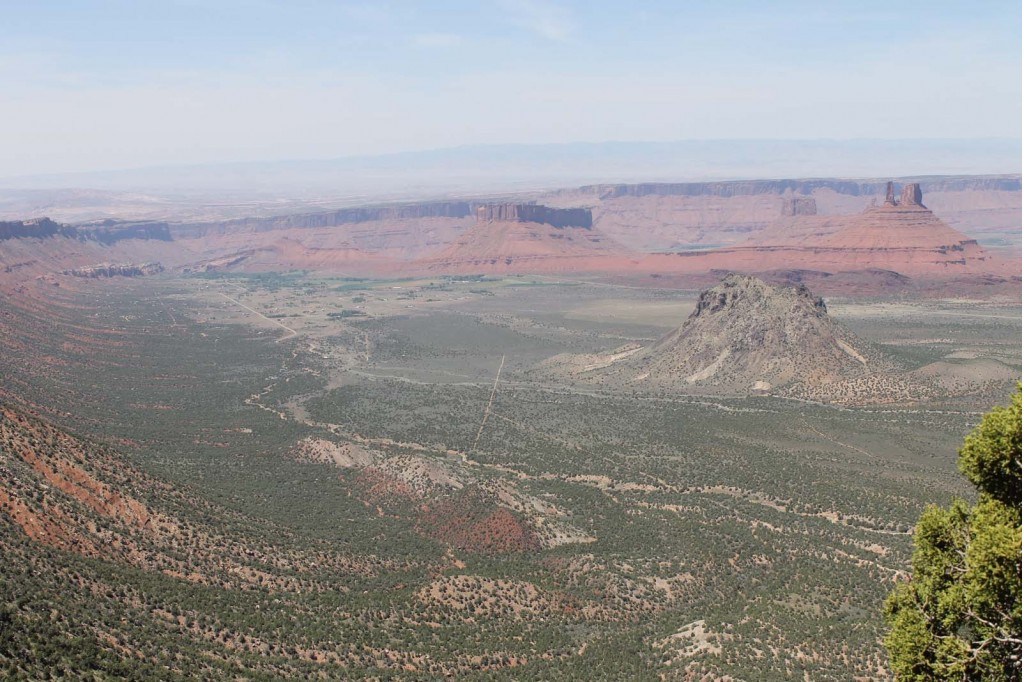 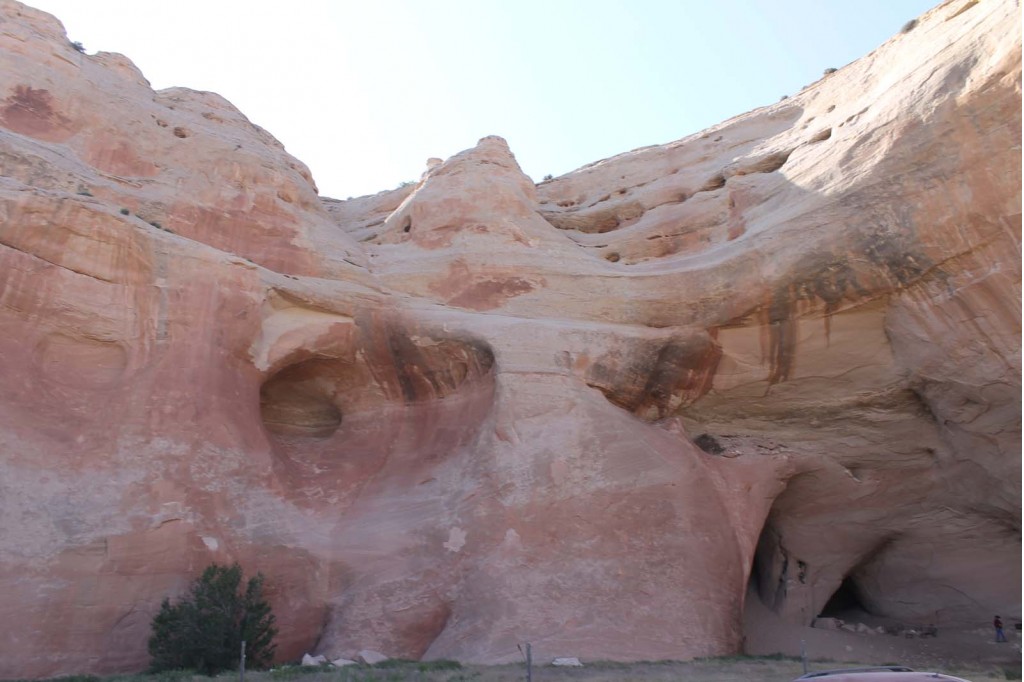 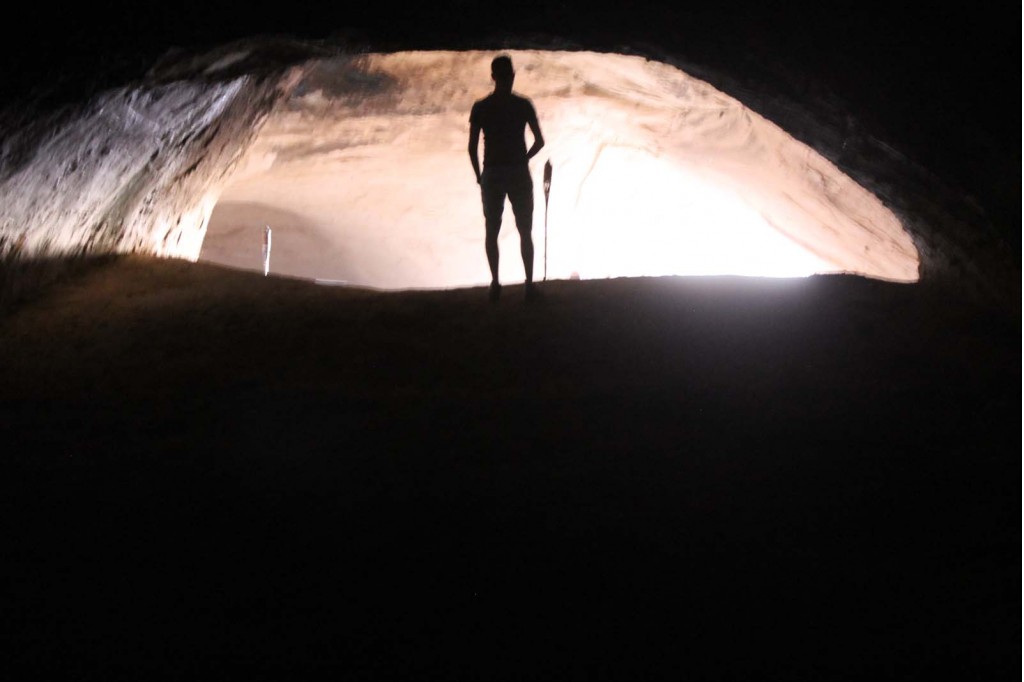 We'd been on the trail for a solid seven hours by the time we reached our campsite at the Wind Caves, which are spectacular even after you've been inundated with spectacular all day. Later I tried—and failed—to get shots which captured the majesty of the scene in torchlight.

I didn't feel particularly beat up—even though there were sections of the trail which bounced me around like a rag doll in a dryer. But I was a little brain dead. Because even with the knowledge that the trail has been vetted—along with the help from the Jeep Jamboree spotters—concentrating so hard on driving takes a toll. Fortunately, there was plenty of cold beer waiting, and even sporadic mobile service, which allowed Aaron and I to settle a question which had bugged us on the trail.

Spoiler alert: Young MC is neither dead nor in jail.

While overcast weather meant the generally brilliant stargazing didn't pan out, a persistent wind allowed me to hear the whistling the Wind Caves are known for, and the beer made sure I didn't have any trouble sleeping. We were back on the trail around eight the next morning, and headed toward another outrageous vista above the Colorado River. The way down from the perch above the river was more technical rocks and slow going, and at this point, the Trailhawk's front suspension had started to make some slight creaking sounds, though I couldn't feel any difference in performance. The engineer I asked about it later said it was probably caused by dust working its way into the components. 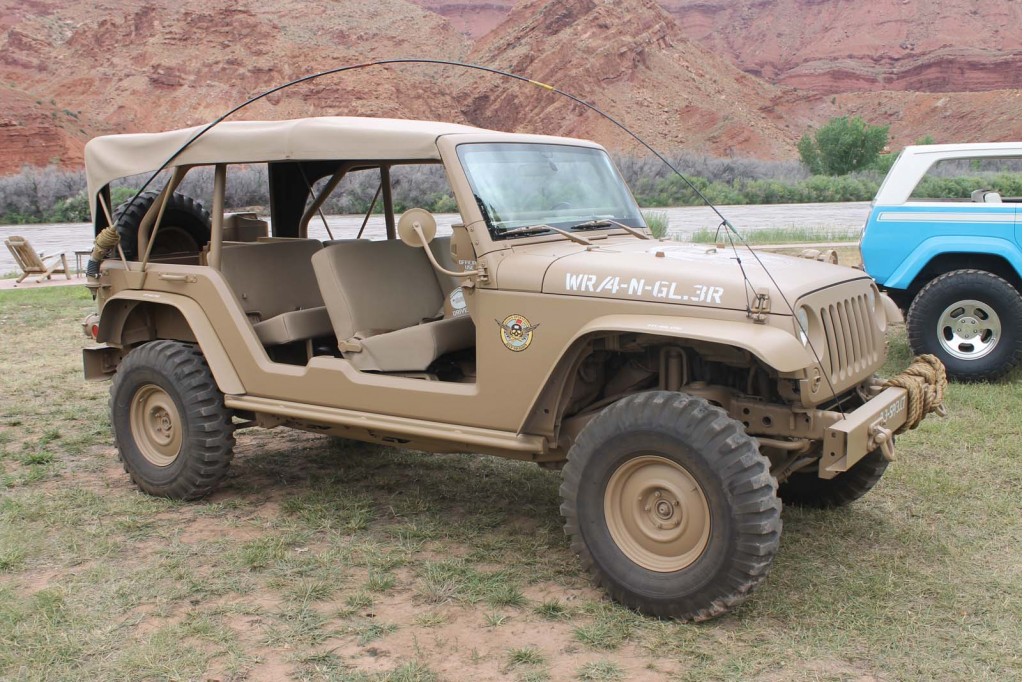 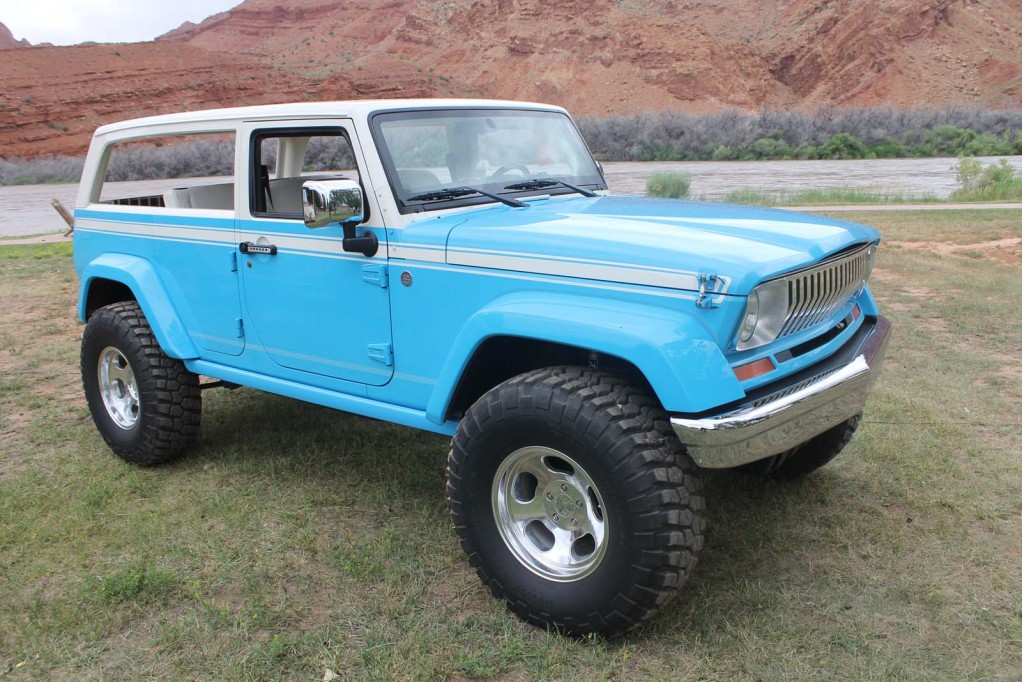 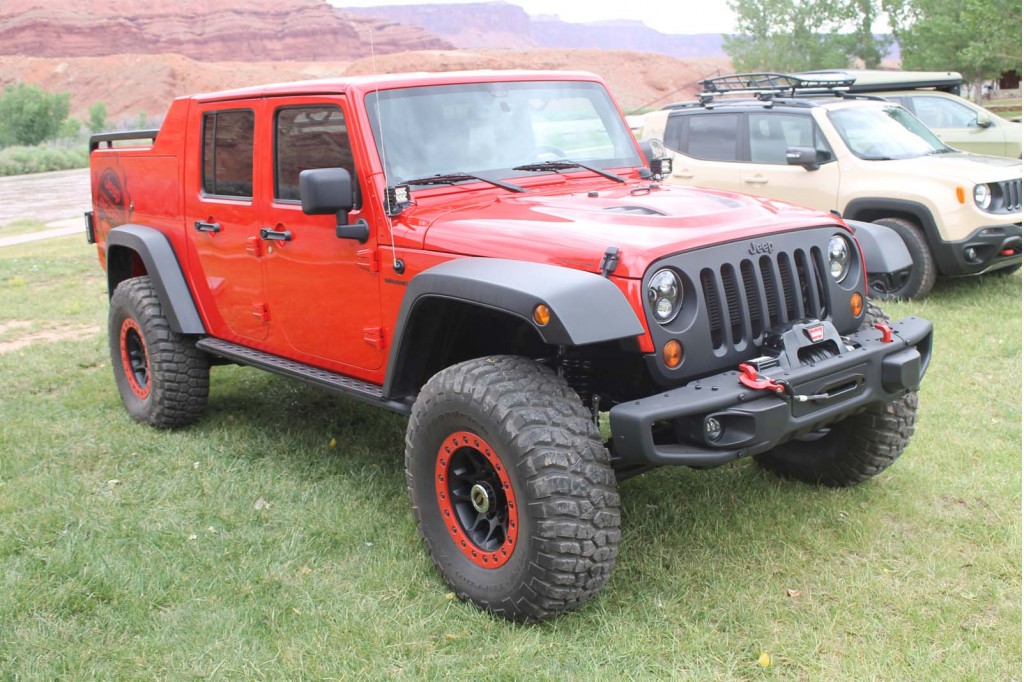 The final driving I'd do on the trip was around the parking lot of the Sorrel River Ranch, a gorgeous resort situated on the banks of the Colorado. And while the terrain was hardly challenging, I did get a chance to get behind the wheel of the concepts Jeep had brought to the Easter Jeep Safari, including the Jeep Staff Car and the Jeep Wrangler Red Rock Responder.

Everyone's clear favorite was the baby blue retro-styled Jeep Chief—despite the fact it wasn't the best driving. The clutch was light, the gearbox had weird throws, the wood slats on the inside rattled, and I could easily brain myself on the roll bar by taking a speed bump. But it's a concept after all, just built by the Jeep workers for the fun of it.

That said, I had a blast in it, and every "civilian" guest at the Ranch was crestfallen when I broke the news that it'd never see production. Perhaps if enough folks pestered Jeep, they might make a kit—but I wouldn't count on it.

Enjoy all the photos from the Moab Experience 2015.