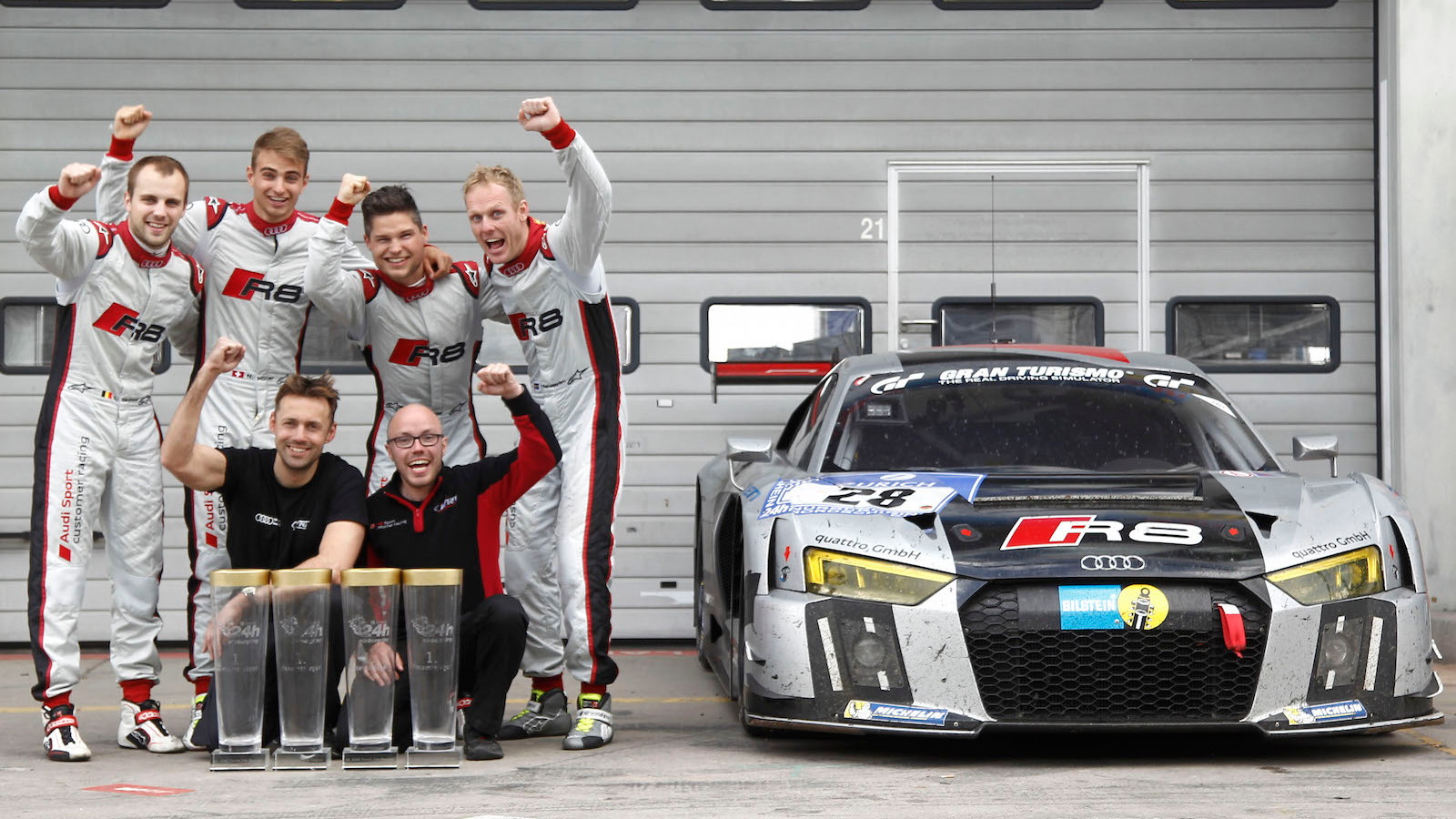 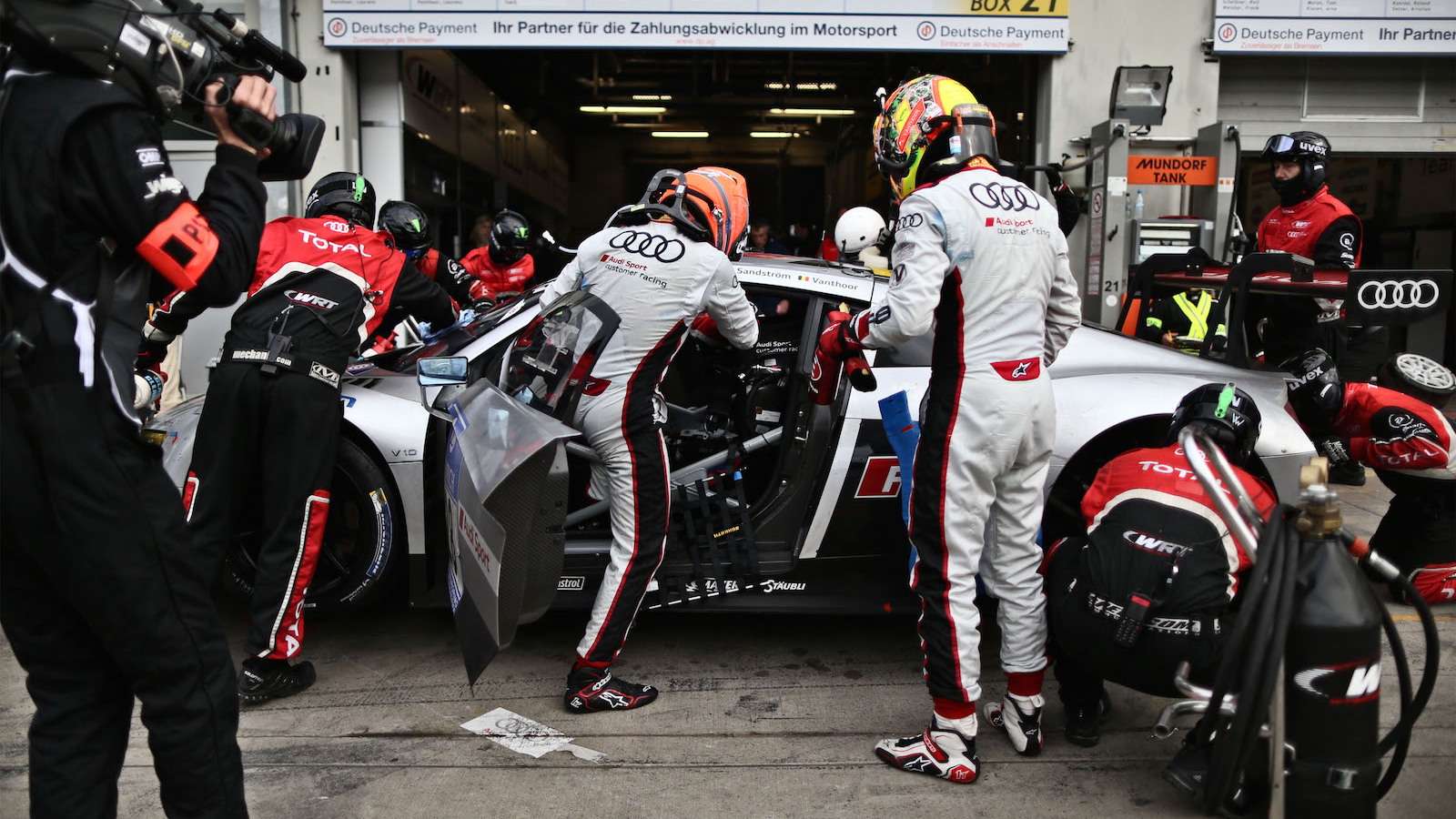 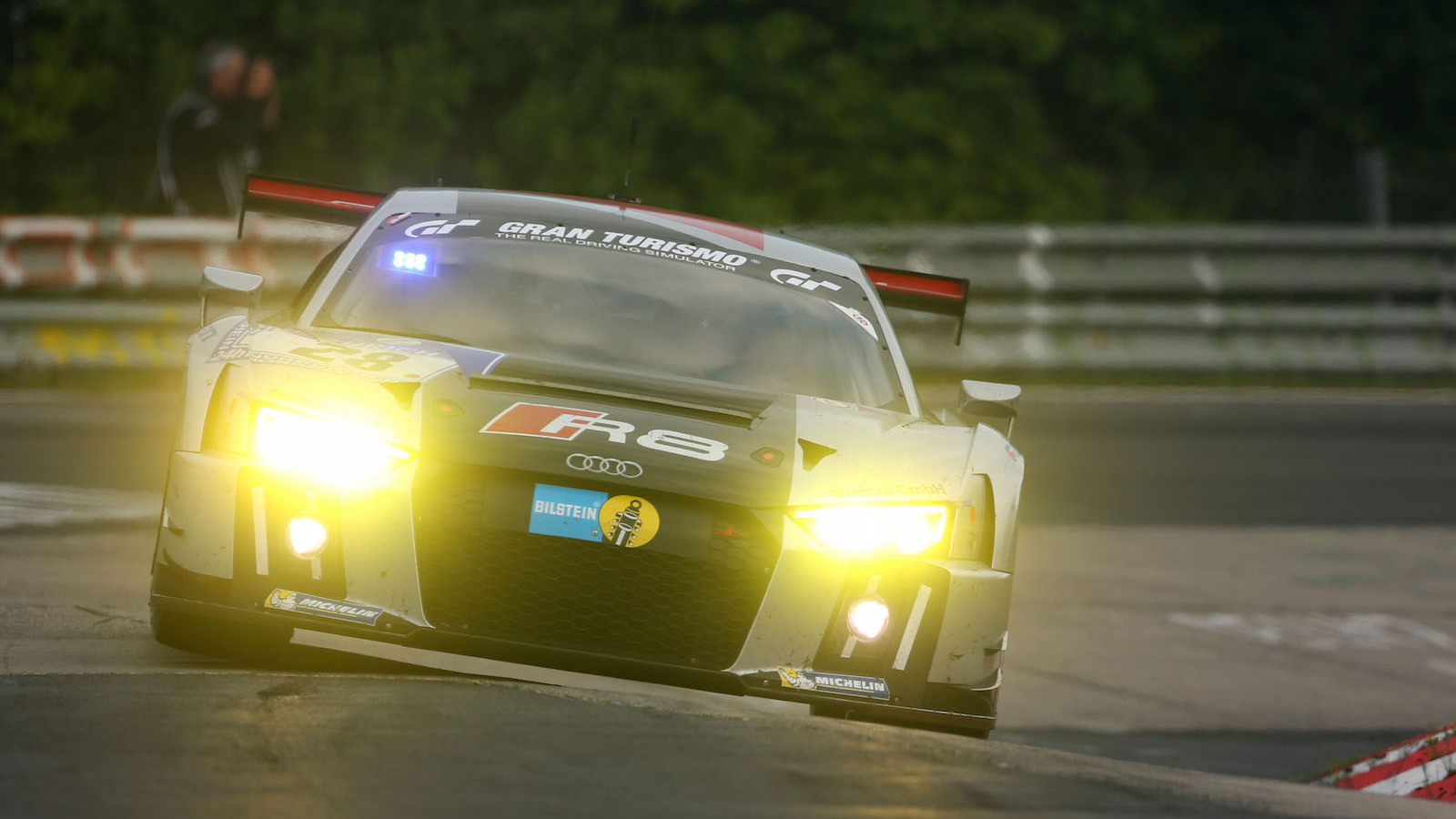 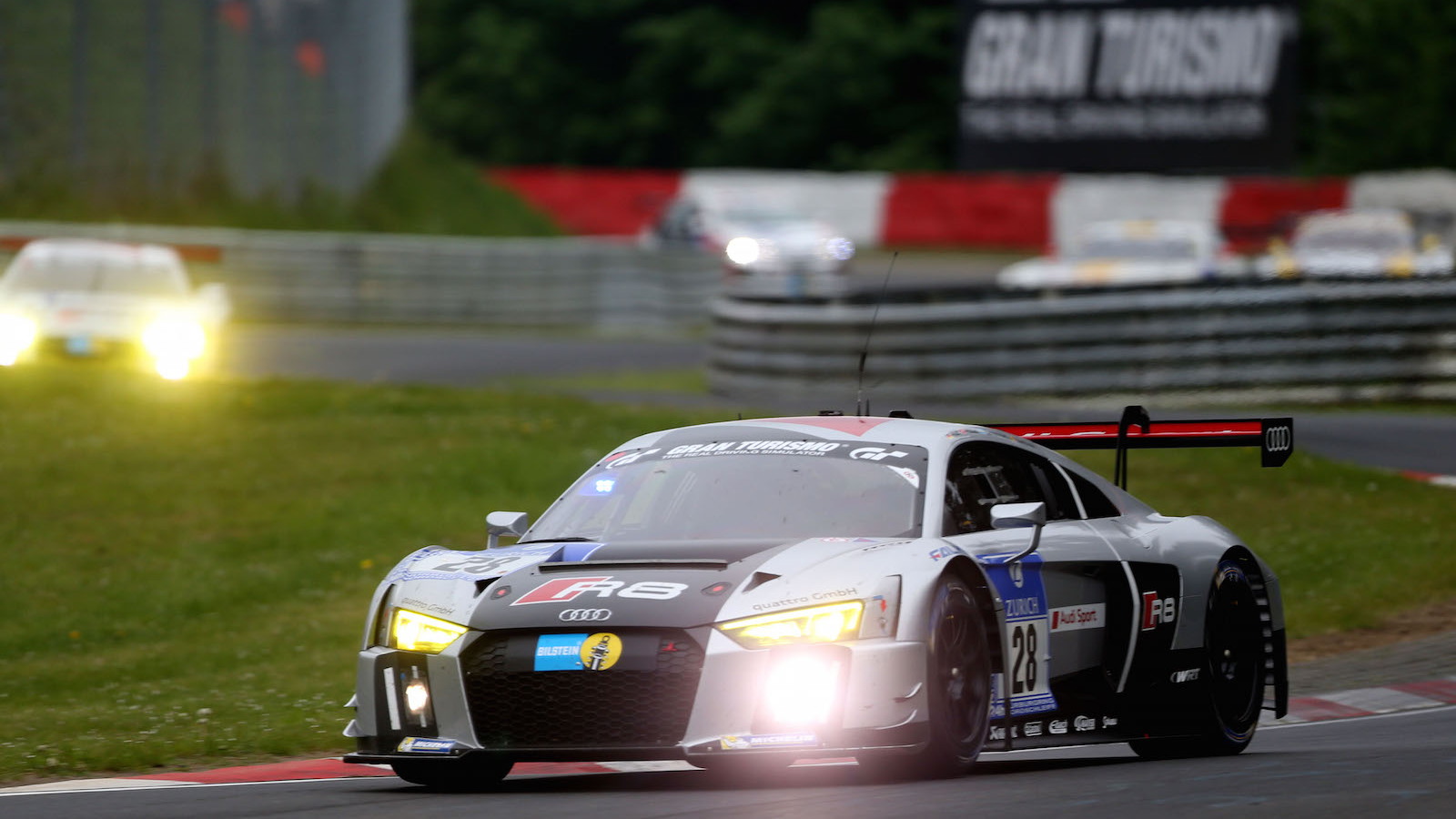 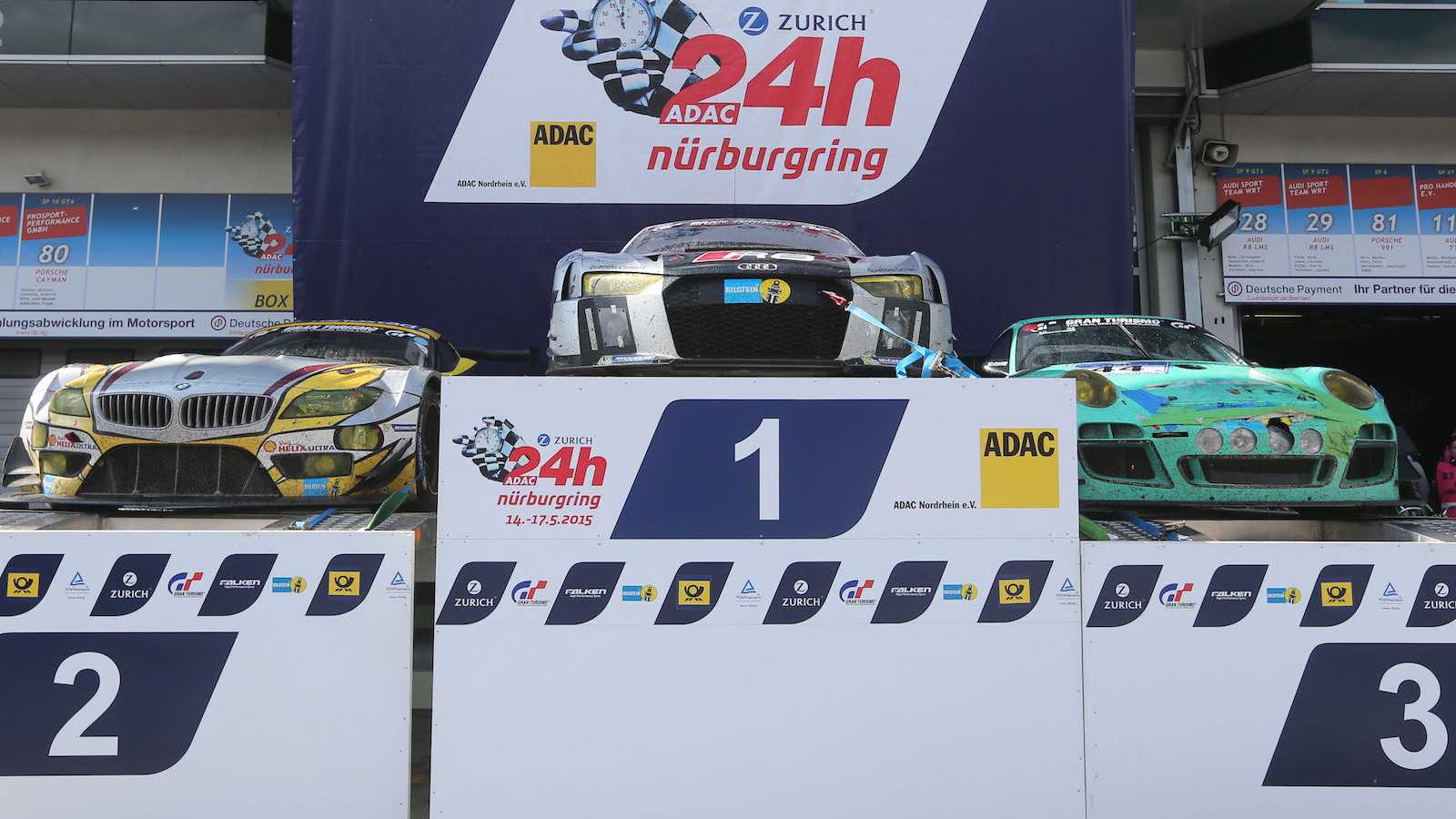 We’ve all heard it before: X race car is totally based on the production car—no, really it is—and that means you should, like, completely buy the road car because, therefore, it’s awesome. Except that that’s rarely the actual case.

With the 2017 Audi R8, it’s actually the case, and in some very surprising ways.

At the 2015 ADAC Zurich Nürburgring 24 Hour race this past weekend (full results coverage here), an all-new, not-yet-finished-with-development Audi R8 LMS race car took the overall win after a record number of lead changes. It was a close fight with the best of the mature and proven BMW and Porsche GT race programs, and it still came out in Audi’s favor—even though the car is essentially untested; this was the car’s first 24-hour endurance race to date.

And it did all of that with the actual production engine from the actual production car. The only difference from the 5.2-liter V-10 you’ll find in the coming 2017 R8, in fact, is an inlet restrictor—a trumpet-like velocity stack—right in front of the throttle body. That inlet restrictor actually cuts power back from the 610 horses the production car will get, to a maximum of 585 hp. At the ‘Ring this past weekend, the engine was limited to 500 hp for balance of performance reasons.

That’s right—the production engine is too damned fast for racing.

Of course, the Audi R8 isn’t the only modern GT car that uses a less-powerful version of its engine for racing than for road use—Corvette Racing’s C7.R (and the C6.R before it) use a smaller, less-powerful engine, too—but it’s not a production engine. It’s a racing engine.

Just ahead of the race, we sat down with Audi Customer Racing chief Romolo Liebchen to talk about what makes the new R8 LMS tick—and just how close it is to the actual R8 road car that’ll hit the U.S. early next year.

“The running costs are quite good with this solution. For the competition it's really hard to beat the running costs of our engines. Its strong enough for racing, it's reliable, the mileage is really good,” said Liebchen. "We have to run our racing as a business, and the cost of building and engine is significant. Using the production engine is a big help for us.”

Of course, using a race car that’s largely built on the production car is nothing new for Audi—the last R8 LMS Ultra shared about 54% of its parts between the two. The newest car shaves that down to just about 50%, but the parts that are changed are more for convenience than for improved performance, says Liebchen.

There’s also quite a bit of unique racing-specific aerodynamic work on the car. “I think it's state of the art in aerodynamics. With the targets you have to fulfill now with the performance requirements from the FIA, I think this is our way to be competitive without any disadvantages like we had in the past,” said Liebchen. “We spent seven sessions over 3 days with the model wind tunnel. This procedure was done together with our designers, for the look of the car. This is something which works out quite well, as they understand more what works for racing, and we understand more what looks good for the car.”

That’s right—unlike most race programs, which take a finished road car and then figure out how to make it into a race car—a process that unavoidably results in compromises—Audi has paired the development of the race car and the road car for the last two-and-a-half years.

“In the beginning, the road car side was a bit nervous to work with the race team,” said Liebchen. “But now, things are good, with benefits flowing back to the road car from the race car development.”

In fact, Liebchen points out, production of both the race car and the road car have started at almost the same time—with the race car actually being about 2-3 weeks ahead of the road car. (Deliveries of the next-gen Audi R8 start later this summer in Europe).

Of course, having a razor-sharp race car is great as long as you have razor-sharp pros at the wheel, with the skills and reflexes necessary to tame touchy mid-engine handling characteristics. But when you’re selling cars to gentleman racers, you need something a little more approachable—but still blazingly fast. Audi seems to be doing a remarkable job in that respect, too. Despite having two cars packed with some of the world’s fastest racers in its two factory-backed new R8 LMS race cars, those cars didn’t finish the race—the win came from a customer team, Audi Sport Team WRT with Christopher Mies, Edward Sandström, Nico Müller, and Laurens Vanthoor at the wheel.

“A big priority for us was driveability especially for gentlemen drivers,” said Liebchen. “This is always a little bit difficult with a mid-engine car, which is a bit snappier than a front-engine car. The traction control was improved significantly to make it easier for the gentlemen drivers to control.”

After seeing all of this up-close and in person at the Nürburgring this past weekend, and having driven the previous R8 extensively (as well as the heavily Audi-assisted Lamborghini Huracán), we’re eagerly awaiting the arrival of the four rings' new everyday supercar.

Once the road car is here, we’ll be looking forward to what’s next, too, as Liebchen dropped a tasty little parting hint, accompanied by a smile as mischievous as only a German racing mastermind can offer: “Maybe one day there will be some road car solutions that will be a little more similar to the race car.”