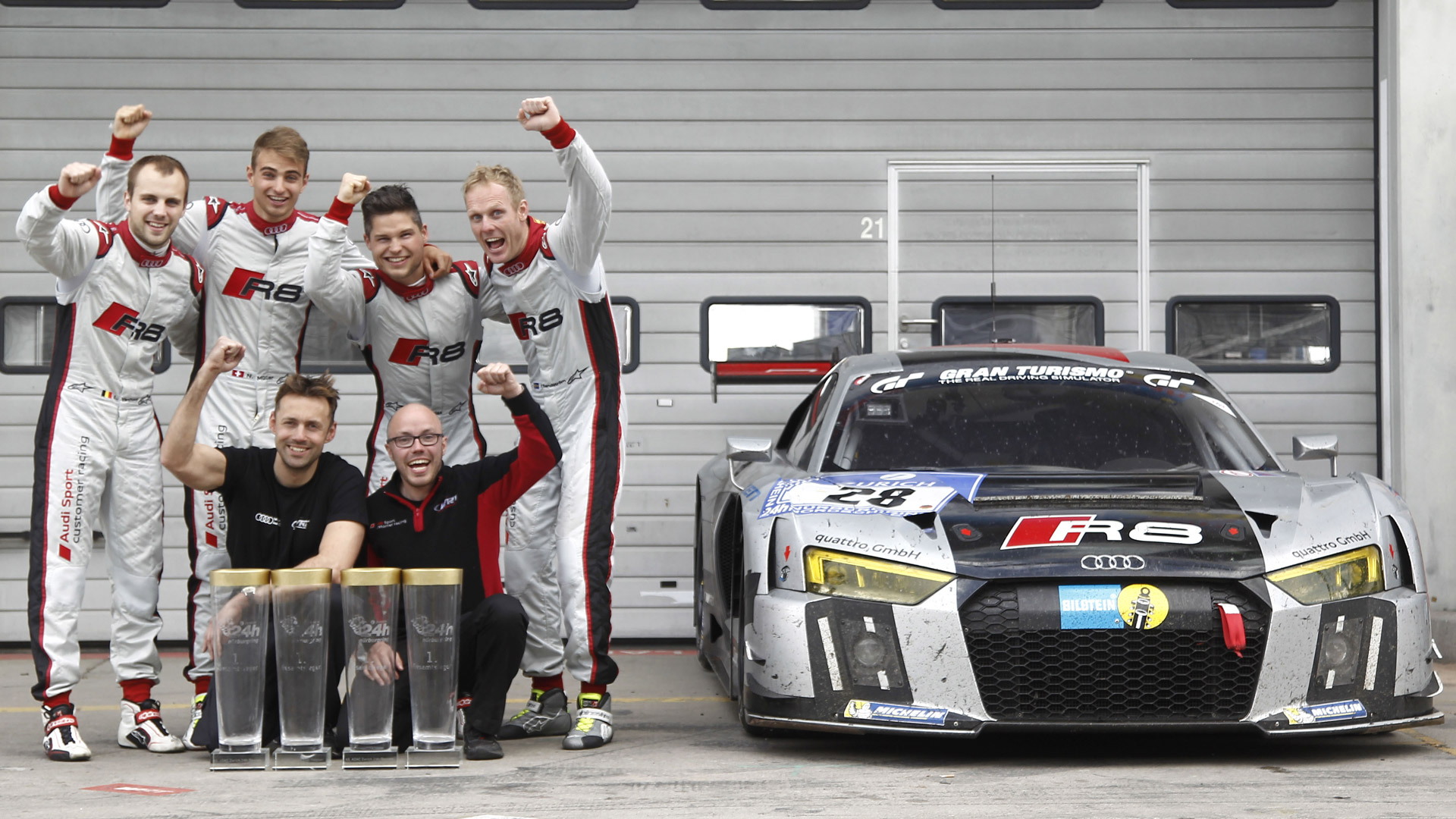 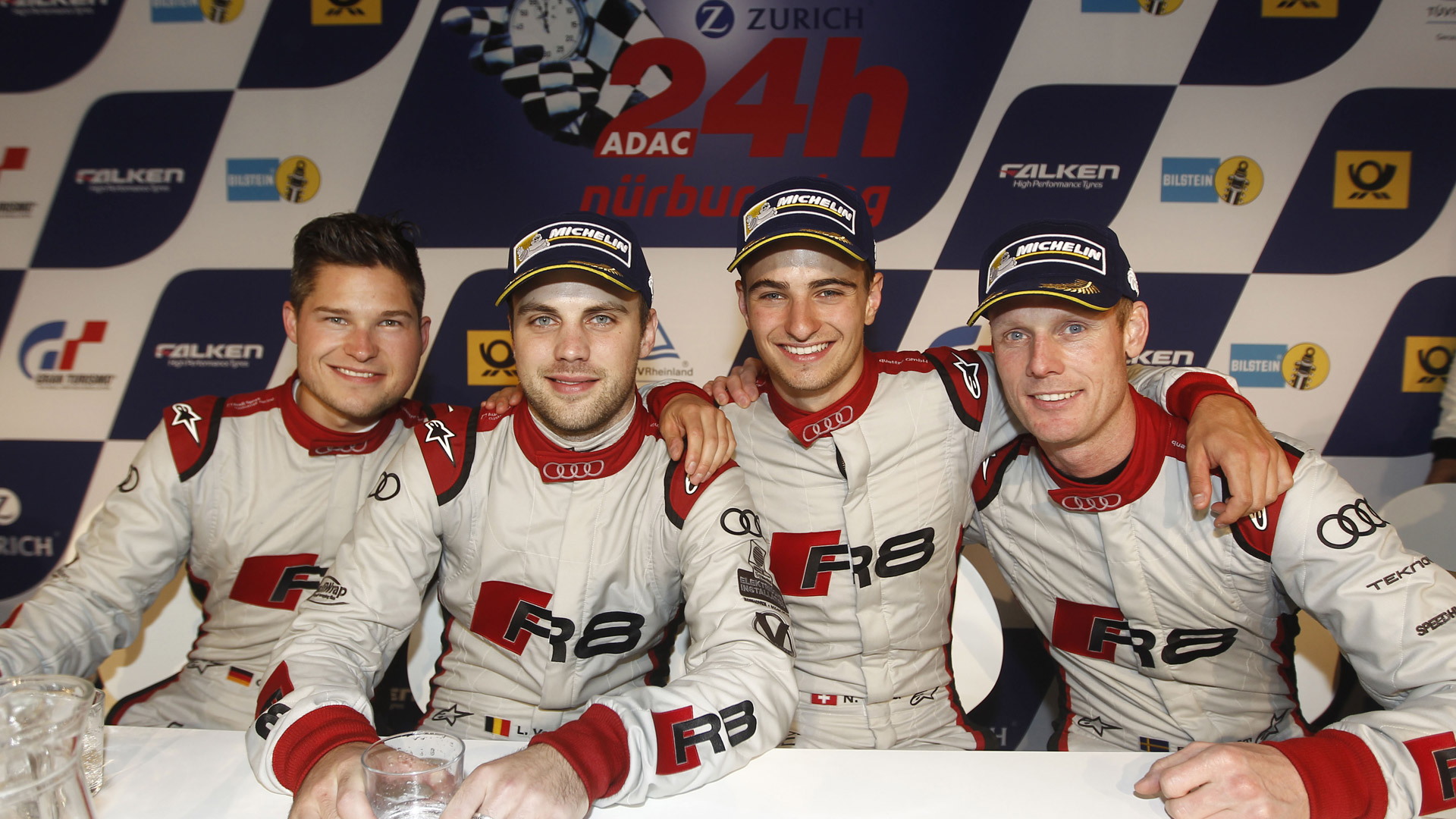 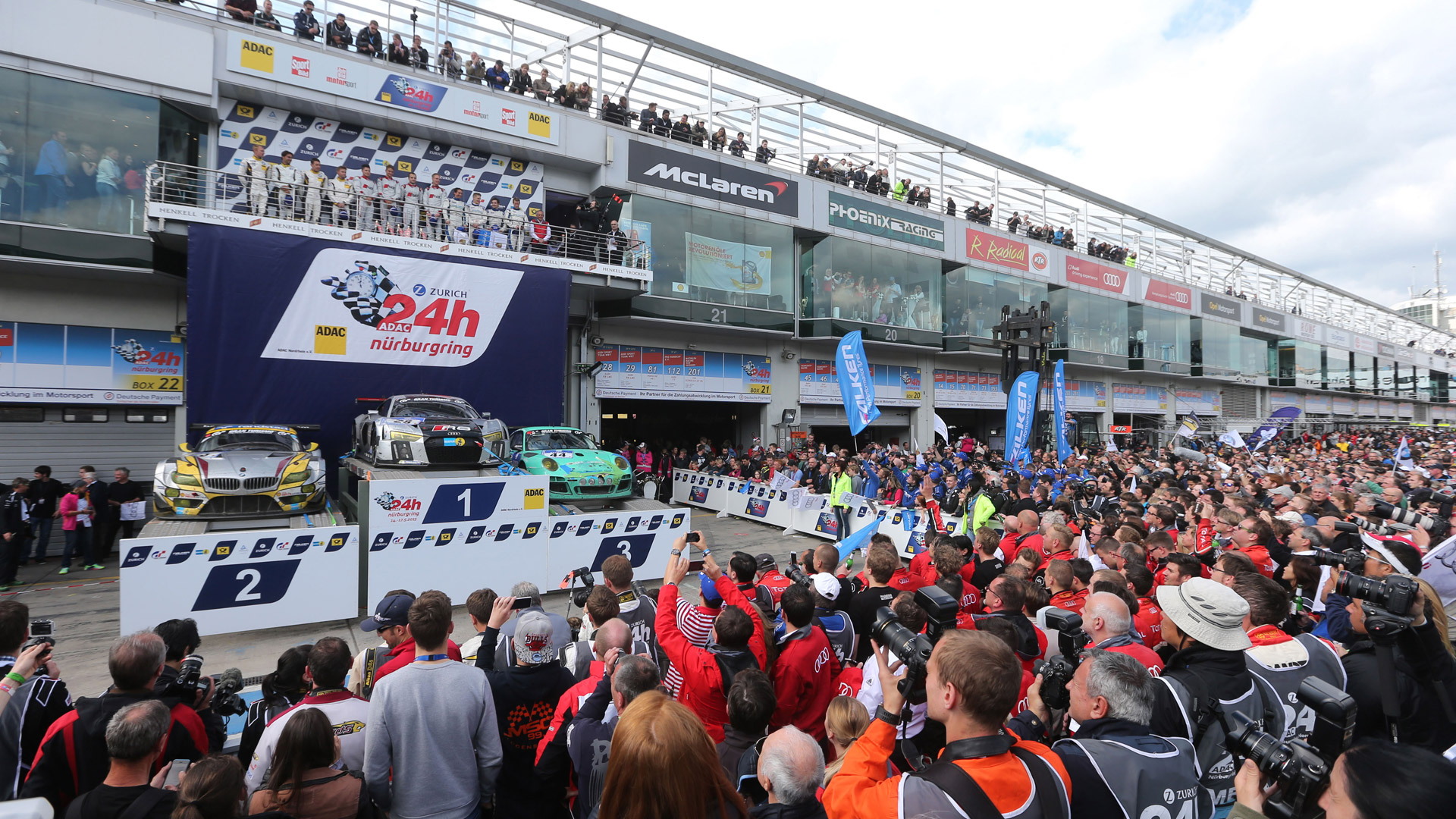 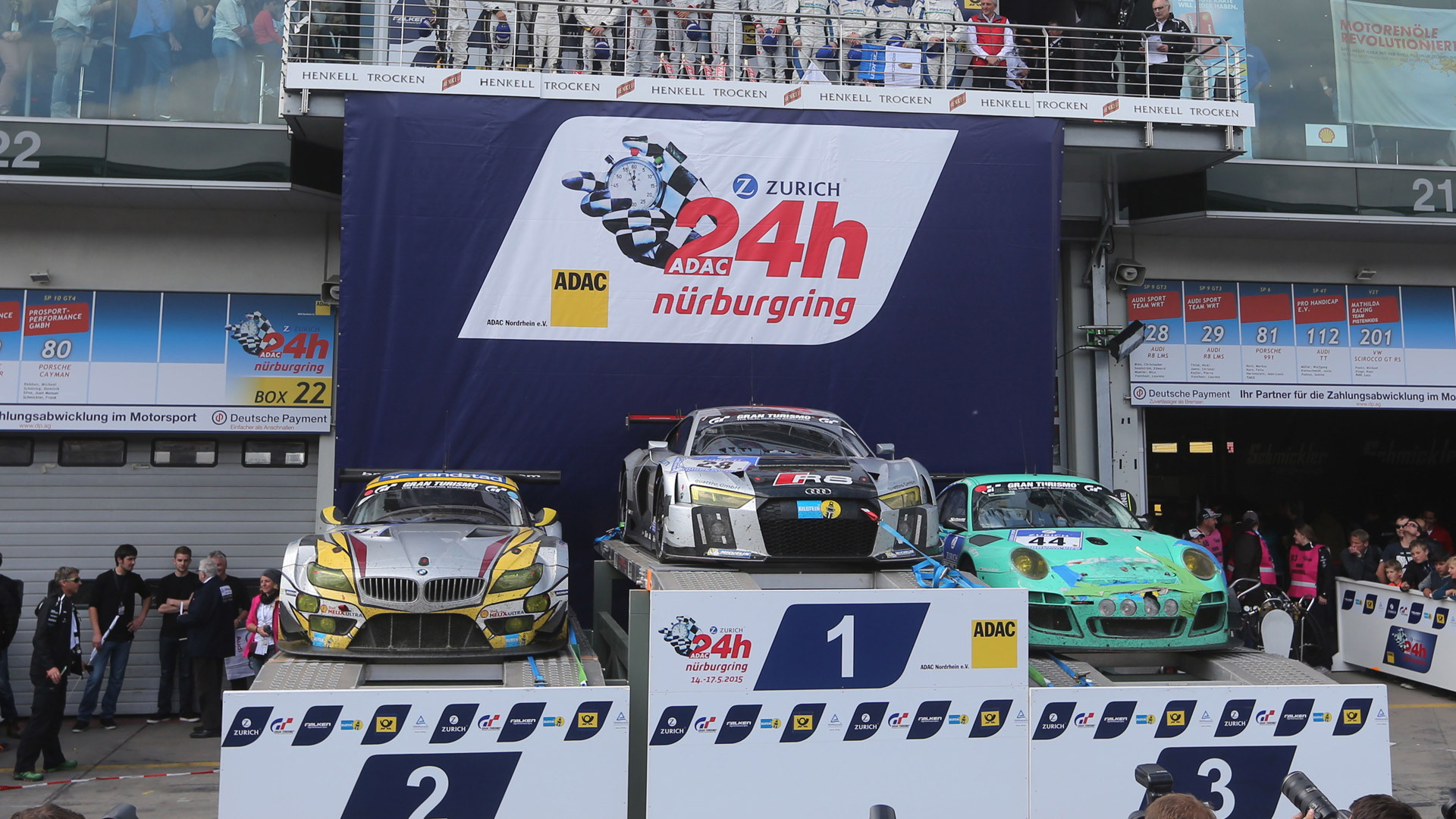 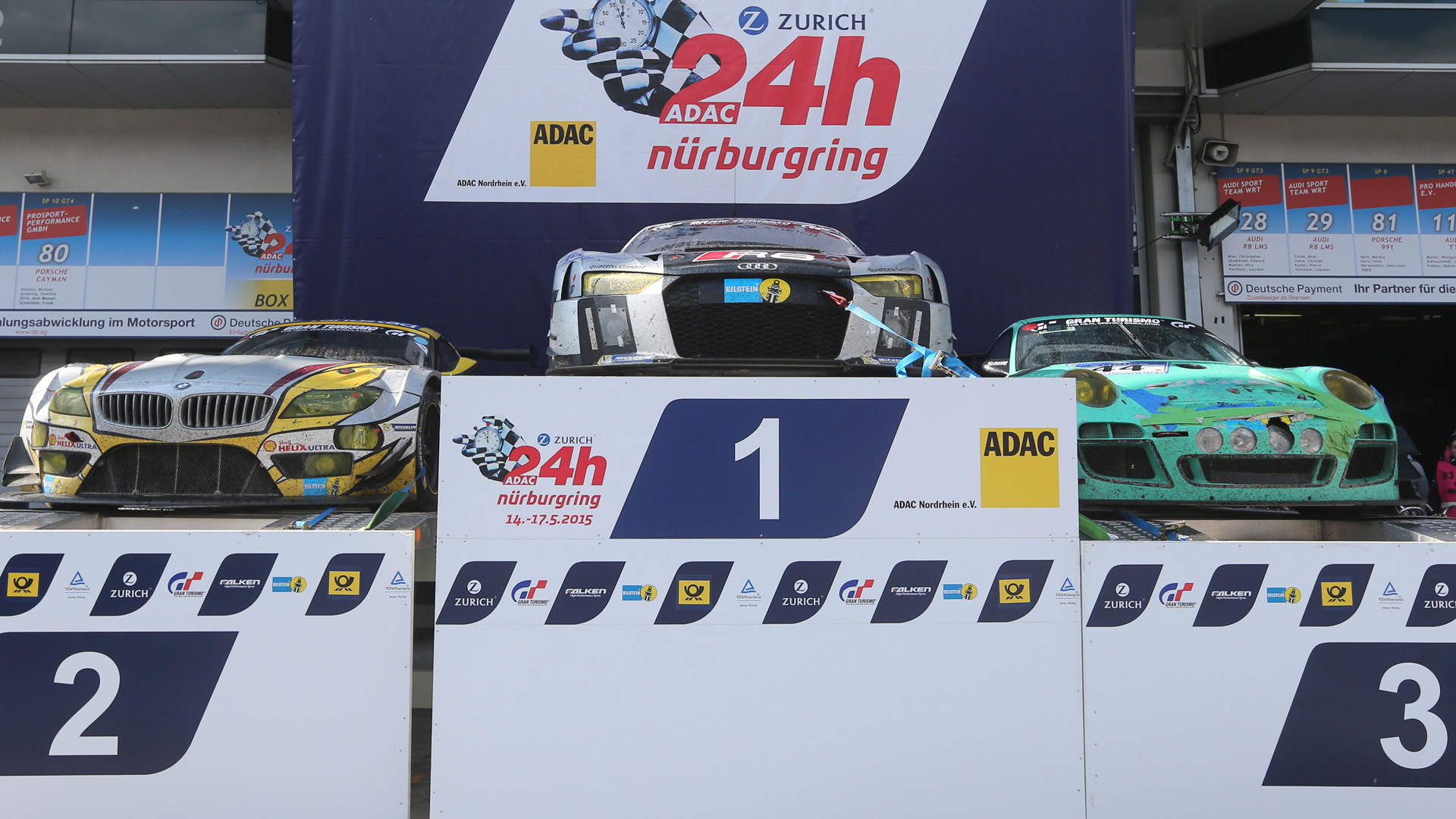 Two months after its debut at the 2015 Geneva Motor Show, Audi’s new R8 supercar in its LMS race car trim is already a top-level endurance race winner, having just taken victory at one of the toughest races in the world: the Nürburgring 24 Hours, the highlight of the VLN series (Veranstaltergemeinschaft Langstreckenpokal Nürburgring).

It was the No. 28 R8 LMS of factory-backed team Audi Sport Team WRT, driven by Christopher Mies, Nico Müller, Edward Sandström and Laurens Vanthoor, that crossed the finish line first and with 156 laps beneath its belt, finishing 40.729 seconds ahead of the No. 25 BMW Z4 GT3 of BMW Team Marc VDS and a lap ahead of the No. 44 Falken Motorsports Porsche 911 GT3 R.

The three podium finishers were all competing in the premier SP9 class.

This year’s race was one of the most interesting in years. During the 24 hours the top spot changed 35 times—a record in the event that has been held since 1970. After the race’s midpoint, either the No. 28 R8 LMS or the No. 25 Z4 GT3 was running in front, depending on the pit stop sequence. In the end, the Belgian-based Audi Sport Team WRT prevailed with a concentrated performance of its drivers and solid teamwork.

Four examples of the new Audi R8 LMS cars were on the grid of the N24 race. Last year’s winners, Christopher Haase, Christian Mamerow, René Rast and Markus Winkelhock, driving in the No. 1 R8 LMS of Audi Sport Team Phoenix, were forced to retire following an accident by Mamerow. The German was hospitalized for observation. In the sister car, the No. 4 R8 LMS, Mike Rockenfeller spun on track due to an oil spill shortly before the race’s midpoint. He was hit by another car that was following him, causing damage to the Audi that was too severe for continuing the race.

The second race car of Audi Sport Team WRT saw the checkered flag in seventh place. Accident damage had caused the car to lose three laps in the early stage. However, with good lap times, its driver quartet was able to cover serious ground, proving the competitiveness of the Audi R8 LMS as well. Audi is quick to point out that about 50 percent of its GT3-spec R8 LMS racer is based on the V-10-version of the R8 road car.

Also worth a mention were the debuts of Bentley and Scuderia Cameron Glickenhaus in the N24 race. Bentley, racing under the banner of Bentley Team HTP, finished a respectable 8th overall with its No. 11 Continental GT3 in the SP9 class.

As for SCG, after losing one of its SCG003 racers during practice, the team’s remaining No. 9 car managed to survive several issues including some fire to finish 35th overall. It was the only starter in the specialized SPX class and at one point was as high as 9th overall.

Below are the top ten results of the 2015 Nürburgring 24 Hours: