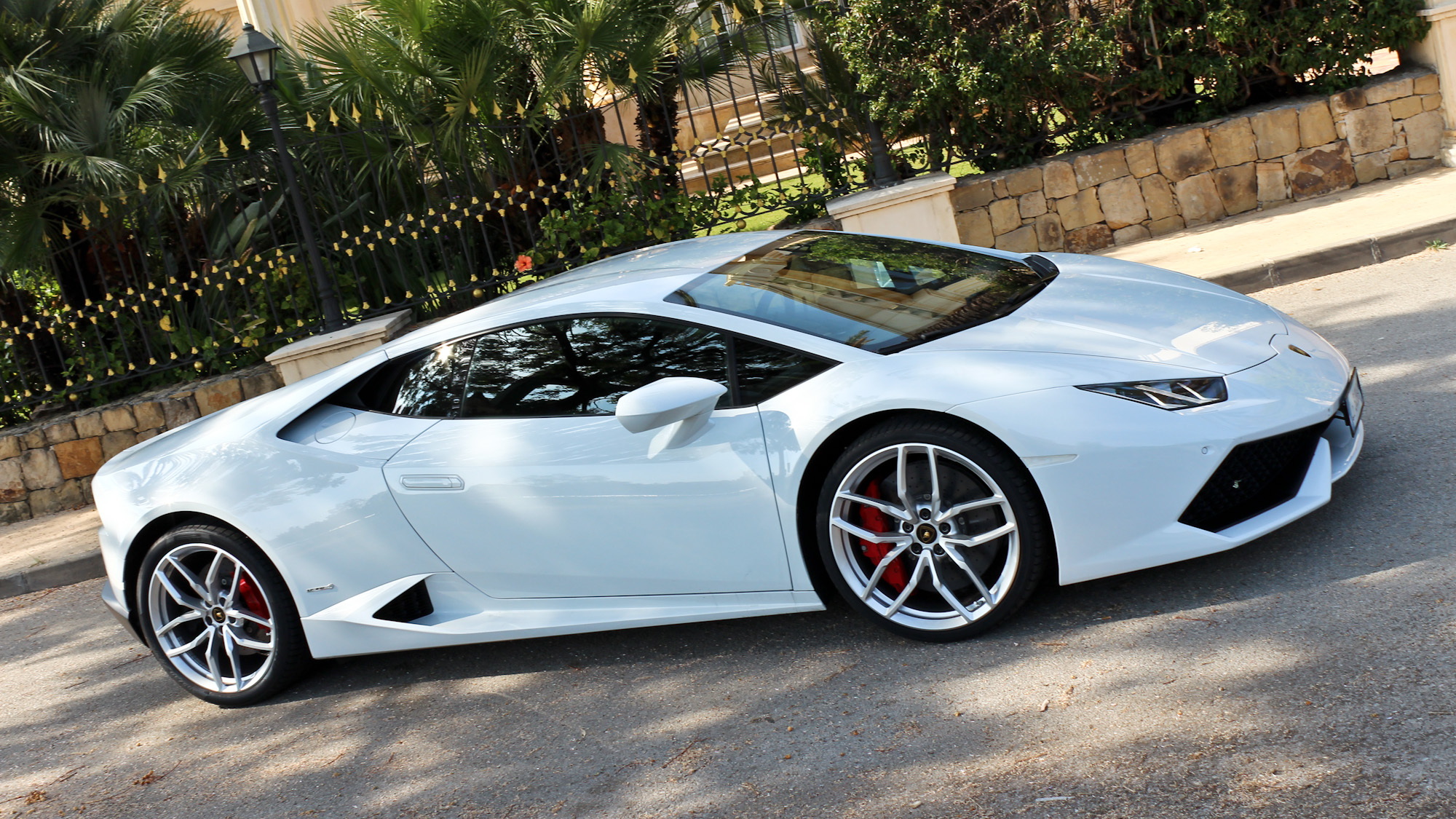 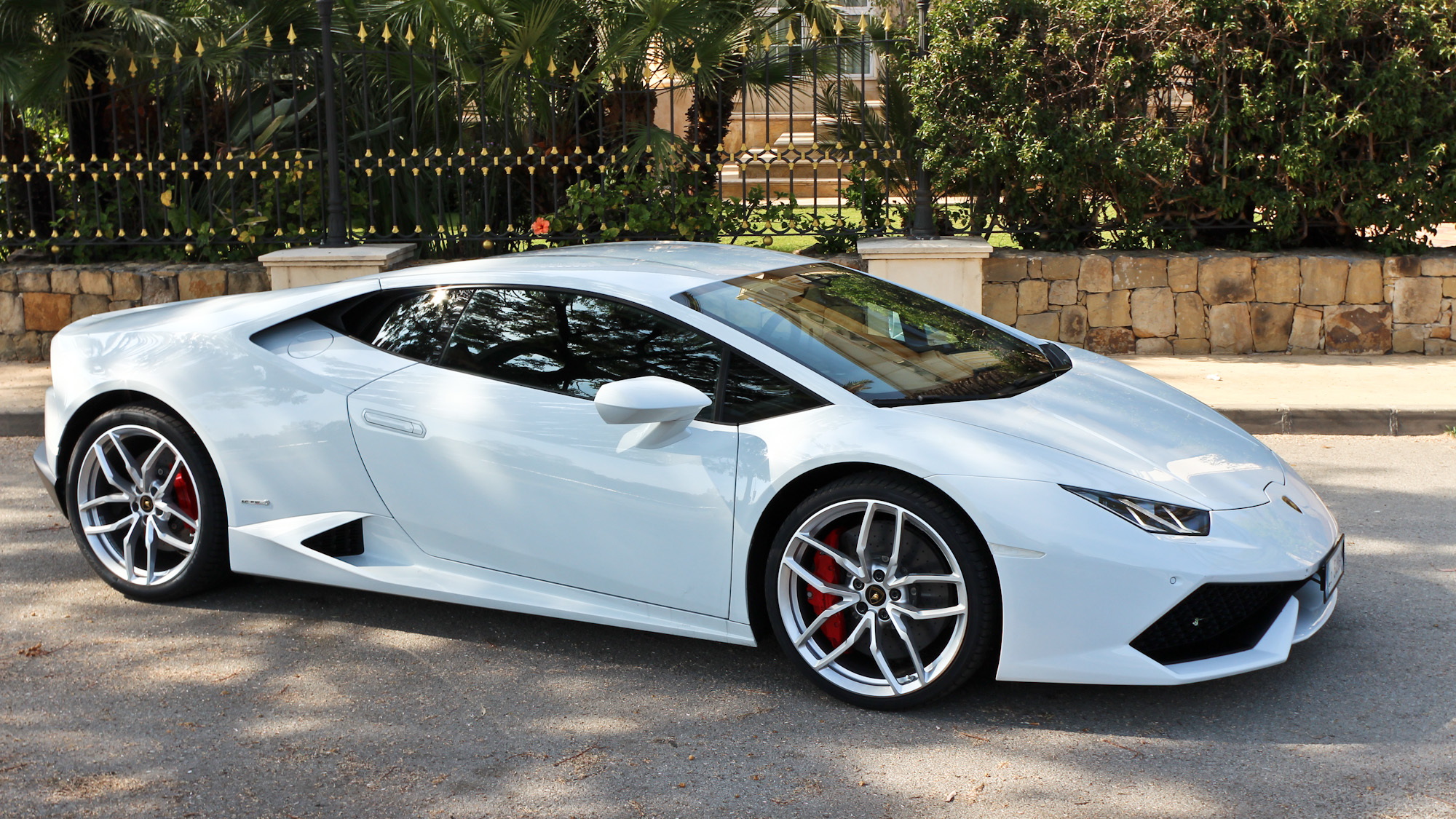 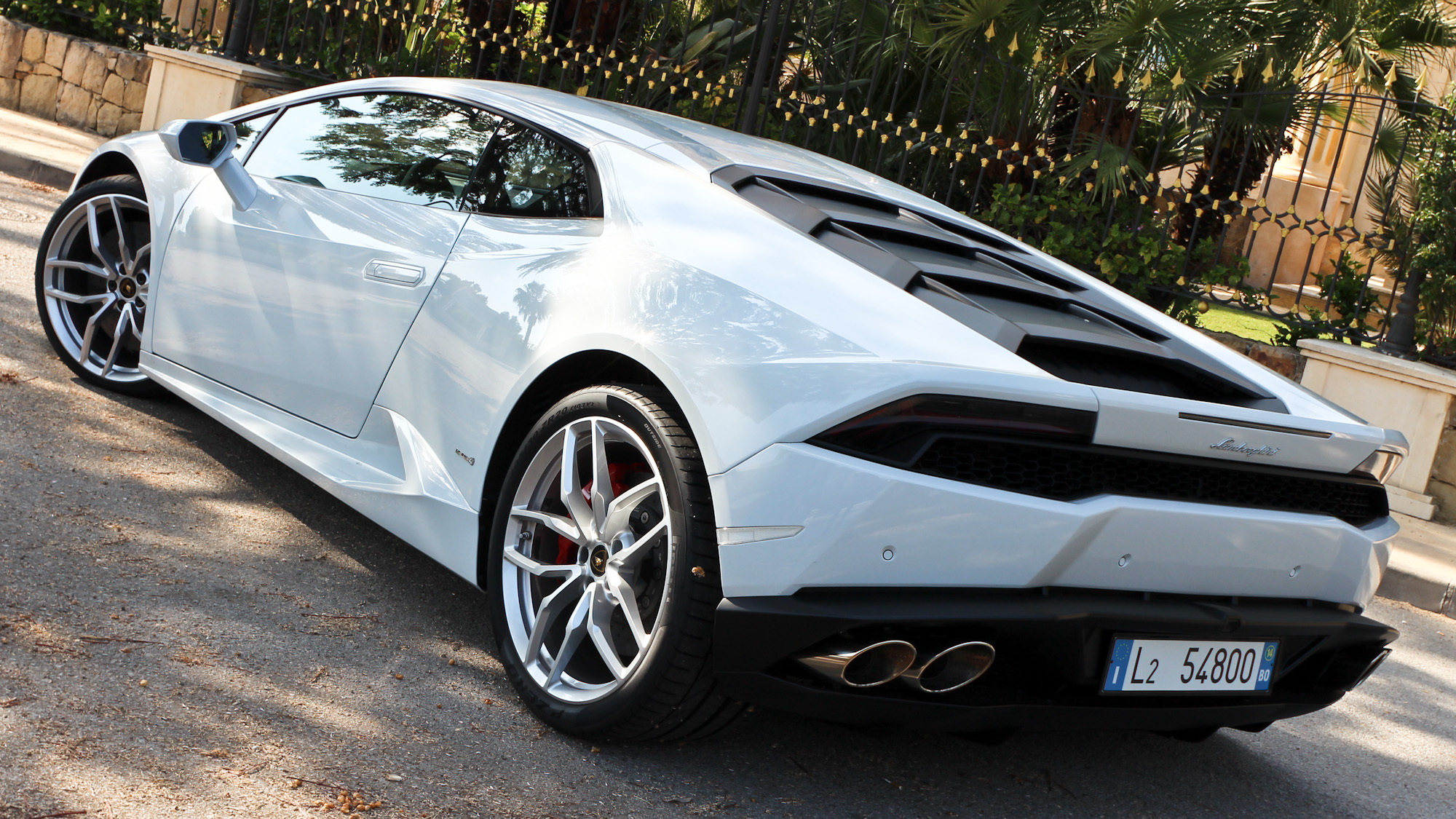 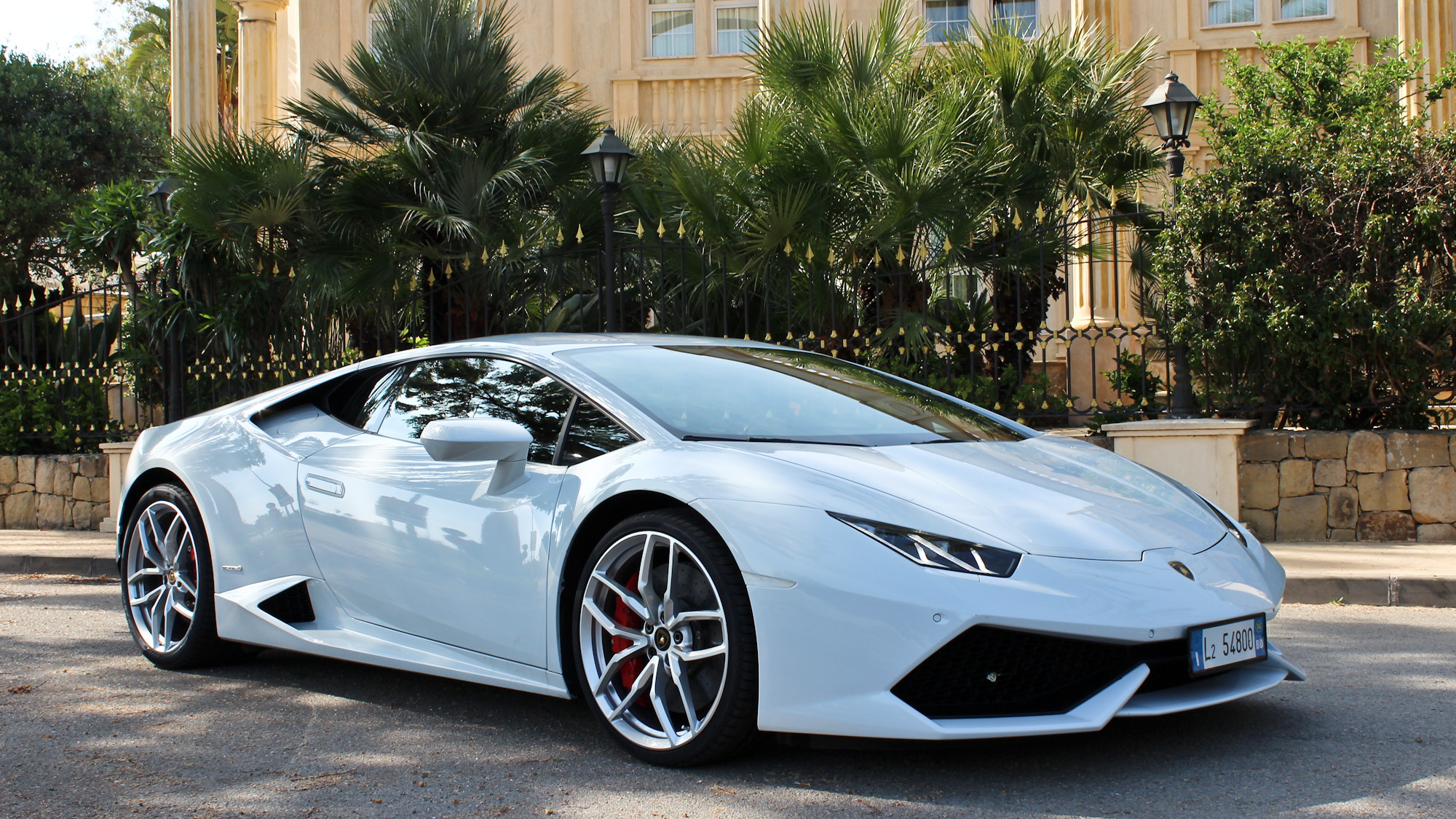 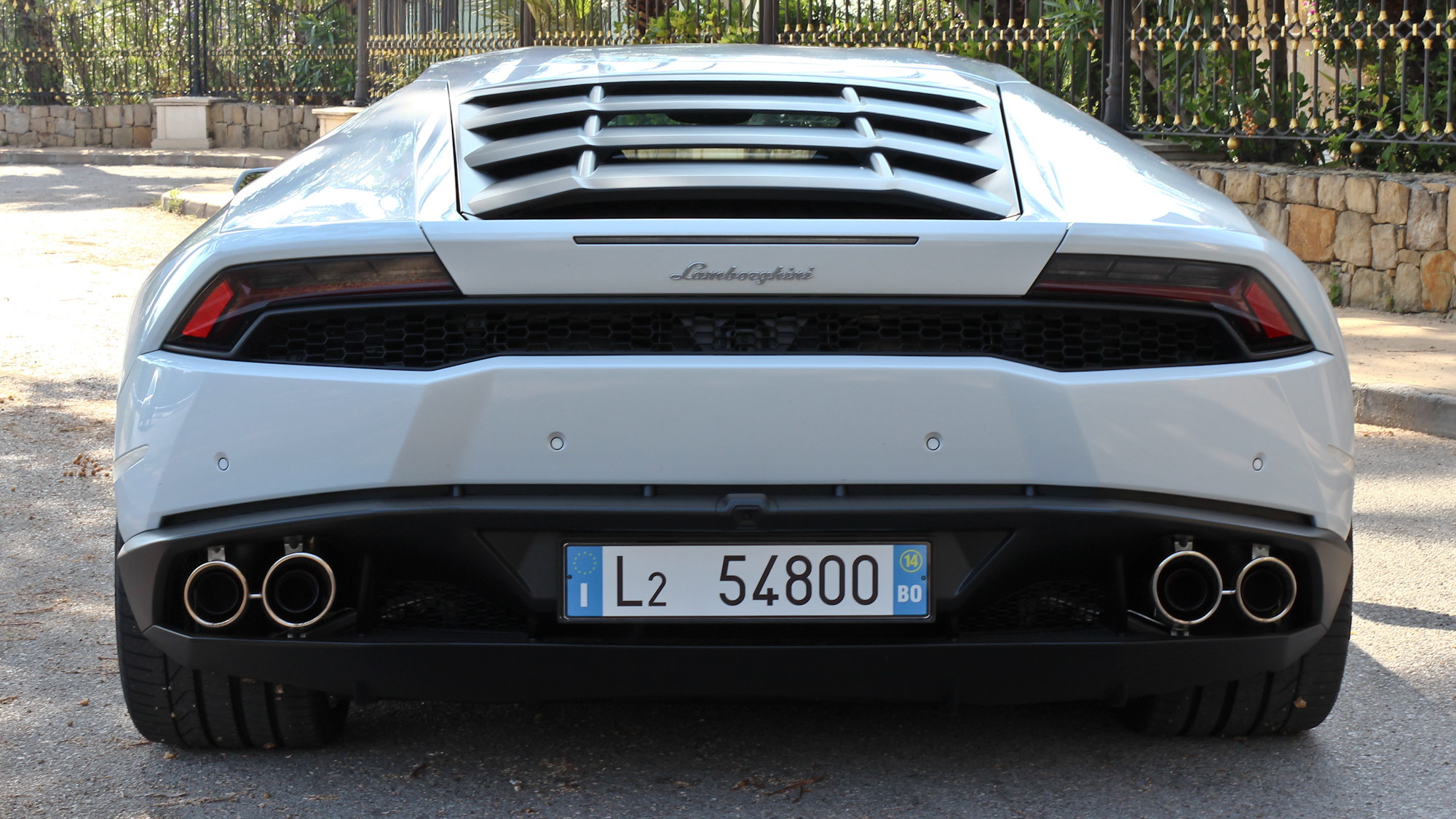 You slide into the low, bolstered seat, flip up the aircraft-style cover, press the start button, and hear the V-10 engine roar to life. Bump the steering wheel mode selector to Corsa, pull the right paddle, and off you go, down the pit lane at Ascari, ready to hit the track behind an Aventador. The Lamborghini Huracán is unleashed.

This is a very good way to spend a Thursday.

Or a Tuesday, a Sunday, or any other day for that matter. Not just because you’re at one of the finest private tracks in Europe, or because you’re well-heeled enough to be there, but because you’re behind the wheel of Lamborghini’s replacement for the Gallardo, the best car the company has ever built.

That’s quite a statement to make with automotive icons like the Countach, Diablo, and Miura in the stable. But it’s true. The Huracán is the best Lamborghini ever.

It’s certainly a marked upgrade from the Aventador, though its sensuous exterior is somewhat more reserved; from ride comfort to shift quality to raw capability, the Huracán is, in nearly every quantitative and qualitative way, superior to its bigger brother.

The Huracán is also a major improvement on the Gallardo—a car I never much cared for, dynamically. Sitting still, or rolling raucously up to its destination, the Gallardo managed to impress for most of its 10-year run, but the unrefined transmission, mediocre handling, and peaky, high-strung engine quickly showed weakness when pressed into true supercar service. Toward the end of its decade, it began to look a bit tired, too, a dozen special variants notwithstanding.

But the Huracán has none of these foibles. In fact, the engineering team behind the Huracán set out rather explicitly to remove the Gallardo’s shortcomings, all the while wrapping it in an unmistakably, irresistibly Lamborghini shell. They succeeded.

Let loose on the Ascari circuit for some group lead-follow action with a Lamborghini hot shoe at the wheel of an Aventador to set the pace, the Huracán initially feels like it's wearing a straitjacket. That's Strada mode, which has an insanely (but probably gladly) intrusive calibration for traction and stability control, preventing the application of full throttle with nearly any amount of steering angle dialed in. Fortunately, there are two other modes accessible via the toggle mounted at the six o'clock position on the steering wheel.

Bump it down into Sport mode and things liven up quite a bit--the throttle mapping gets snappier, the seven-speed dual-clutch gearbox gets quicker, the dynamic exhaust gets louder, and the stability control system lets loose its death grip--just a bit. You have the option of letting the gearbox handle shifts for you in Sport mode, or doing the work yourself via the fixed column-mounted paddle shifters. Still, a few turns in Sport mode and an experienced driver will find themselves wanting more control.

The answer is Corsa mode. Reducing stability control to a minimum--it was so unintrusive when driven smoothly, we found no reason to object despite the Ascari circuit's many tortuous and tricky turns, elevation changes, and hard braking zones. Shifting is manual-only in Corsa mode, adding further to the driver's sense of control. Likewise, the gearbox, throttle, and damping are all sharpened to their most aggressive settings in Corsa, transforming the once mild-mannered Huracán into a car that's serious fun on track.

Dynamically, once in Corsa mode, the Huracán feels rather a lot like the Audi R8 V10 Plus. That's certainly not a bad thing: there's loads of power from the quick-revving 5.2-liter V-10 engine (601 hp, to be precise), and the 3,370-pound car is very well-balanced for a mid-engined, all-wheel-drive car. The tendency toward power-on understeer is notable, but a few laps of calibrating driving style to match the car's grip and propulsion levels quickly makes it an easy car to drive scarily fast.

Part of the credit for the Huracán's good manners goes to the Lamborghini Piattaforma Inerziale, a set of accelerometers arranged in three axes. Many cars use three-axis calculations to provide yaw, roll, and pitch information to the stability control system--but Lamborghini takes it two steps further, installing two additional gyroscopes so each axis has a direct reading for the system to use. Other systems use a single gyroscope paired with accelerometers, requiring them to perform calculations to derive movements in the other two axes. Lamborghini's new system in the Huracán enables far quicker and more precise readings to be delivered to the computers, resulting a stability control system that is noticeably better largely by being completely unnoticeable.

The Huracán's innate dynamic balance also makes good sense when you consider the Huracán's aluminum-and-carbon chassis is now 10 percent lighter and 50 percent stiffer than the Gallardo's. Drag is also reduced by 3 percent while downforce is up more than 50 percent, improving grip at speed and resulting in 8 percent greater efficiency. Add in the new electronically controlled center differential, a major upgrade from the viscous unit in the Gallardo which allows more precise distribution of torque to all four wheels, and the whole system comes together in an eminently competent whole.

We can't quite agree with Lamborghini's assertions during the press briefing before the track session that the Huracán is "the perfect car," or "the best car on track and the street," but we can applaud Lamborghini for getting far closer to those ideals than with any other car we've driven from the brand--and closer than many other brands have ever come.

There are just two items of concern for the Huracán on track: the brakes and the cooling. While the brakes never seemed to experience fade due to heat, they were prone to some odd and unpredictable behavior thanks to a computer algorithm designed to handle panic stops. If engaged due to a loss or reduction of traction at one wheel, or if the brake pedal is engaged too suddenly, the system causes the brake pedal to become excessively firm, and the lack of travel creates a momentary panic in the driver before the realization that the car is, in fact, still stopping just fine sets in.

The second quibble--cooling--is an overall concern, as we had the Huracán enter an overheat "limp mode" behavior during the track session. When overheated, the Huracán limits engine revs to 6,000 rpm and takes over gear shifts to use the highest gear possible--clearly a damper for track-day fun. The circumstances of our journalist track day likely had a strong role in the overheating, however, with the cars being lapped repeatedly with minimal time to cool down on a warm day. An individual driving their own car at a track day would likely never experience the issue.

Having exorcised our speed demons, we headed out for a quick trip through the mountains to see how the Huracán performs in the real world, where 99.9% of these cars will see 99.999999% of their miles. Again, the most apt comparison is to the Audi R8 V10 Plus, and again, the comparison is a good thing. The Huracán is comfortable, quiet, and well-mannered.

Even over very bumpy roads (a detour took us off-route and onto some roads to which no Lamborghini owner would willingly subject their prized steed), the Huracán's composition and poise was unshaken. It's a super sports car, to be sure, and the bumps are noticeable, but the magneto-rheological dampers make the ride smoother than it has any right to be.

In town, the Huracán's width becomes very, very apparent. Passing traffic in the next lane can be a haunting experience, especially on a narrow Andalucian street, and doubly if that traffic consists of large trucks. The width also makes U-turns, parking, and all forms of low-speed maneuvering a bit trickier than in any normal machine--but that's the price you pay for the Huracán's wild performance, comfortable cabin, and hey-look-at-me styling.

The price you'll pay to own a Huracán in the U.S. starts at $237,250. That figure can rise as far as your budget will allow should you wish to engage the Ad Personam customization service for unique colors, materials, or other features.

Something that neither the on-track abilities nor on-road manners of the Huracán can express is the instant rockstar status one obtains by simply being in--or near--the Huracán. People of all ages and genders will give you thumbs up. Some will follow you in their cars, shooting video with their phones and gesticulating madly. Many will assume you're someone famous.

In a way, you are: You drive a Huracán.

Part of the Huracán's magic is its design, a drop-dead gorgeous array of curves and acute angles that recalls something of the Countach's sharp-nosed, high-tailed futuristic wedge shape, mingling it with the aerospace-era themes of the Reventón, and yet coming out the other side of the looking glass with a completely unique, fresh take on the inimitably Lamborghini way of shaping a car.

Another part of the Huracán's magic is the sound. Raucous and unrepentant, the nearly all-new V-10 engine barks, growls, screams, and moans with the best of the cylinder-driven symphony. It's an experience not just for the driver or passenger, but for the tiny slice of the world that surrounds the Huracán as it flashes by.

Rolled in with its dynamic ability and civic civility, the magnetism of the look and sound makes the Huracán not just one of our favorite cars, but the best Lamborghini we've ever driven.