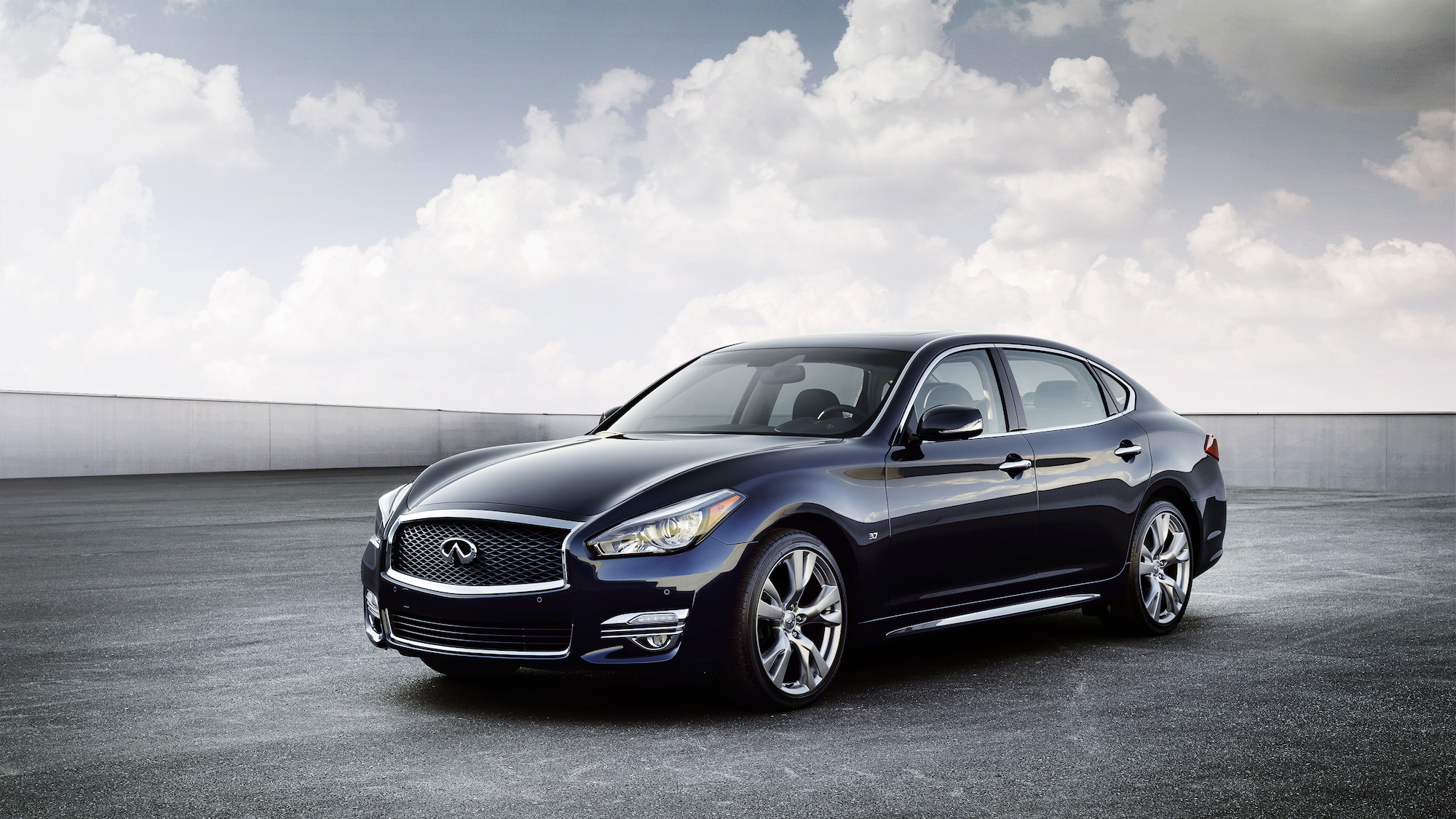 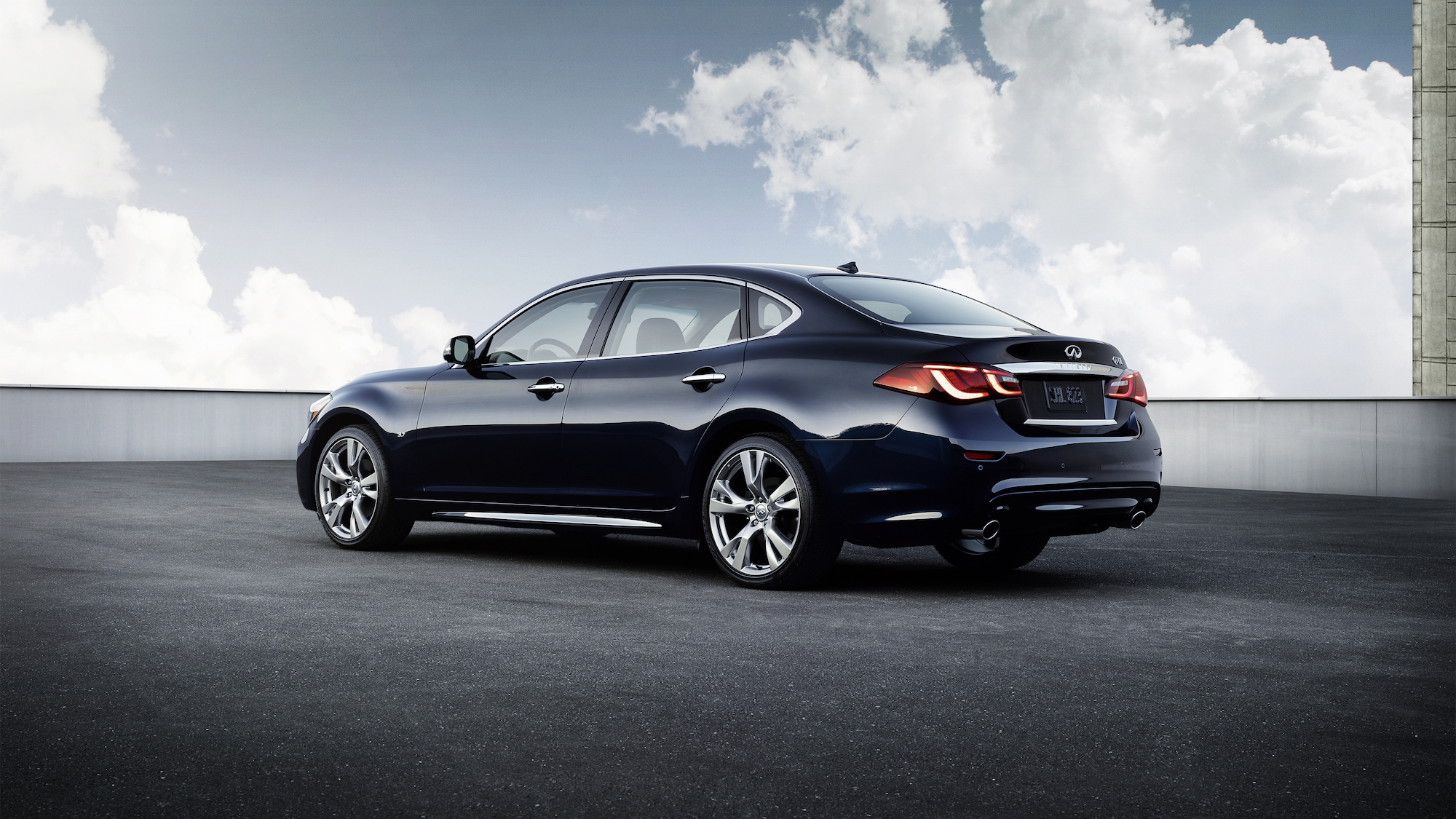 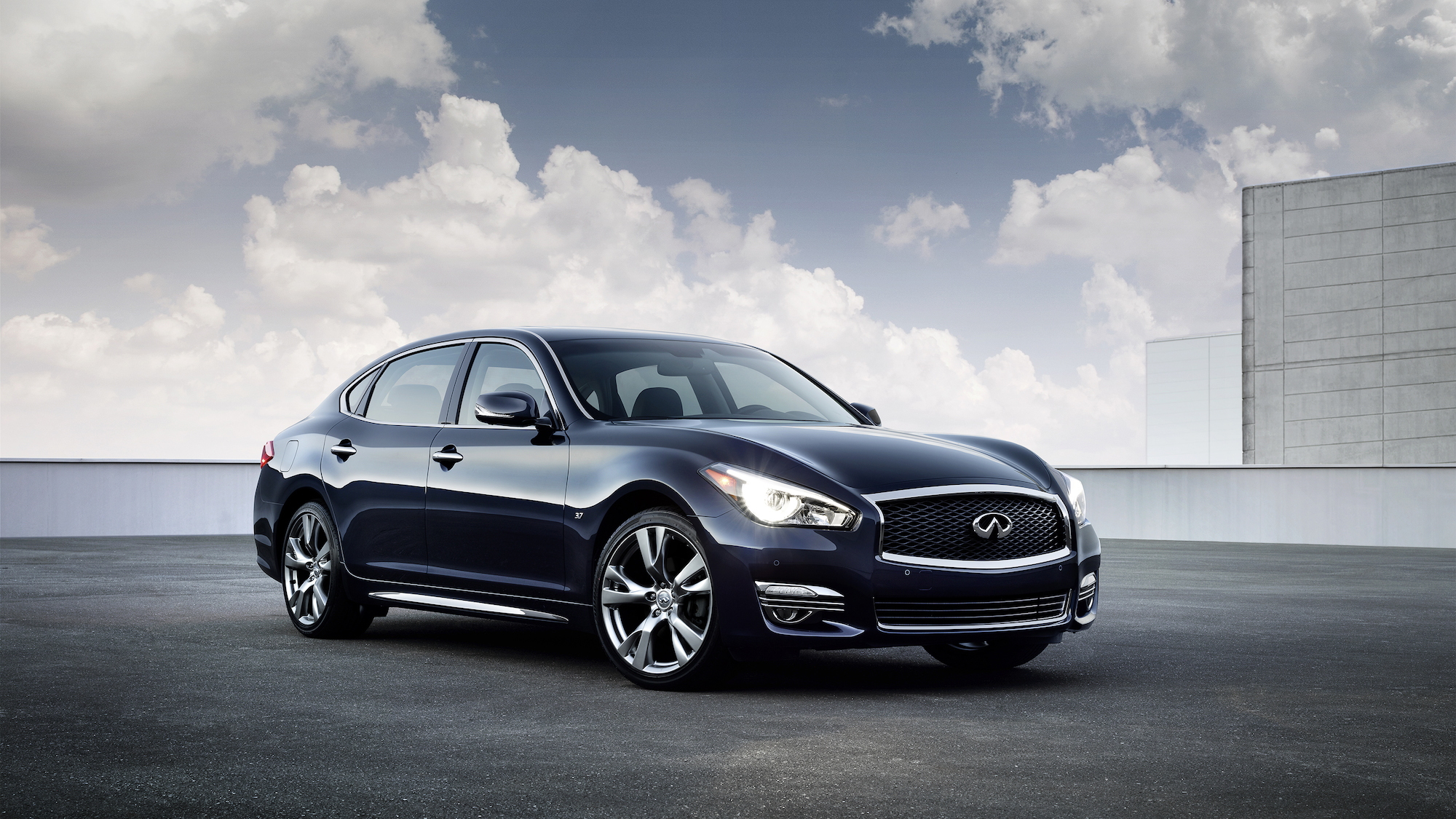 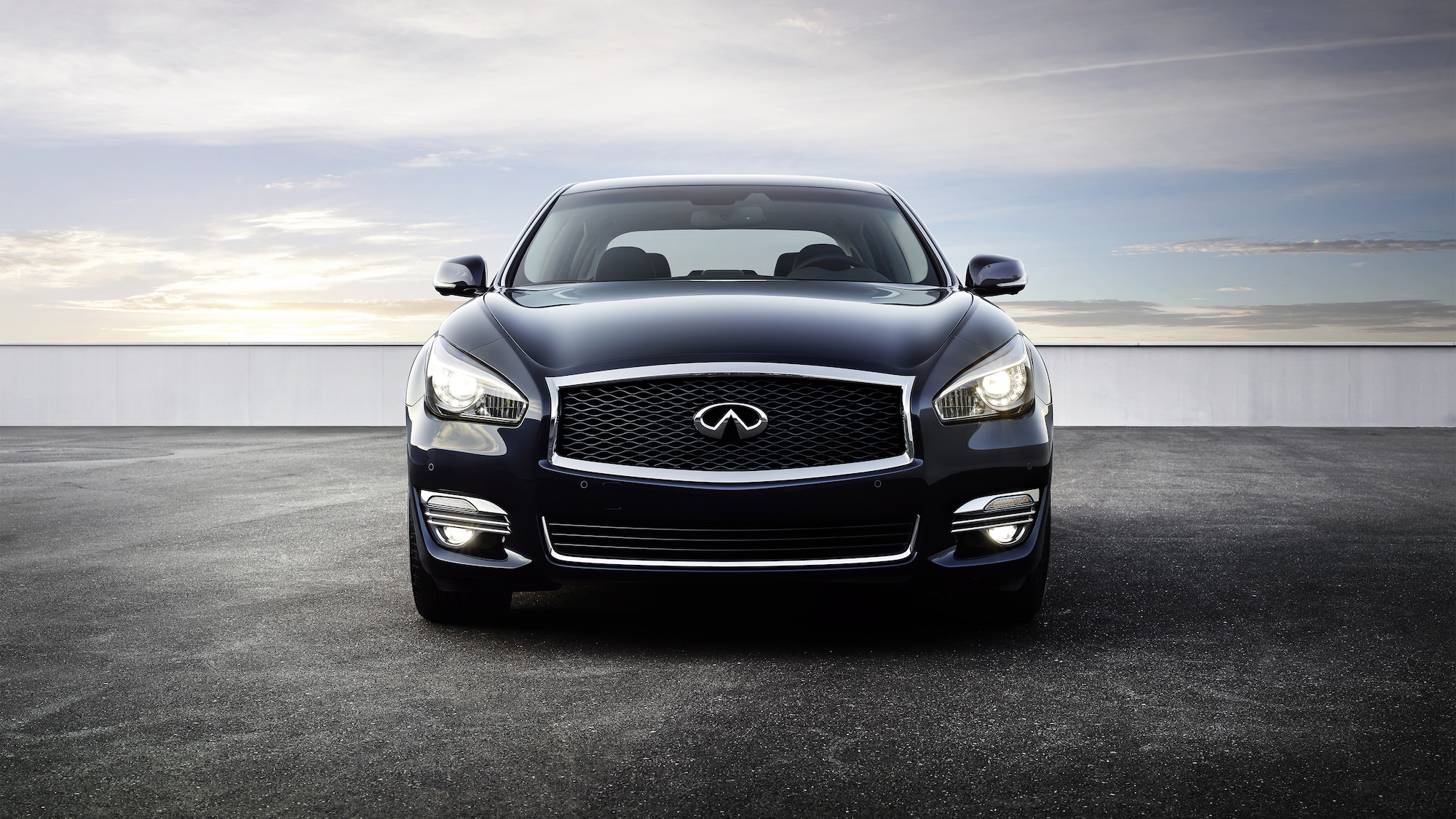 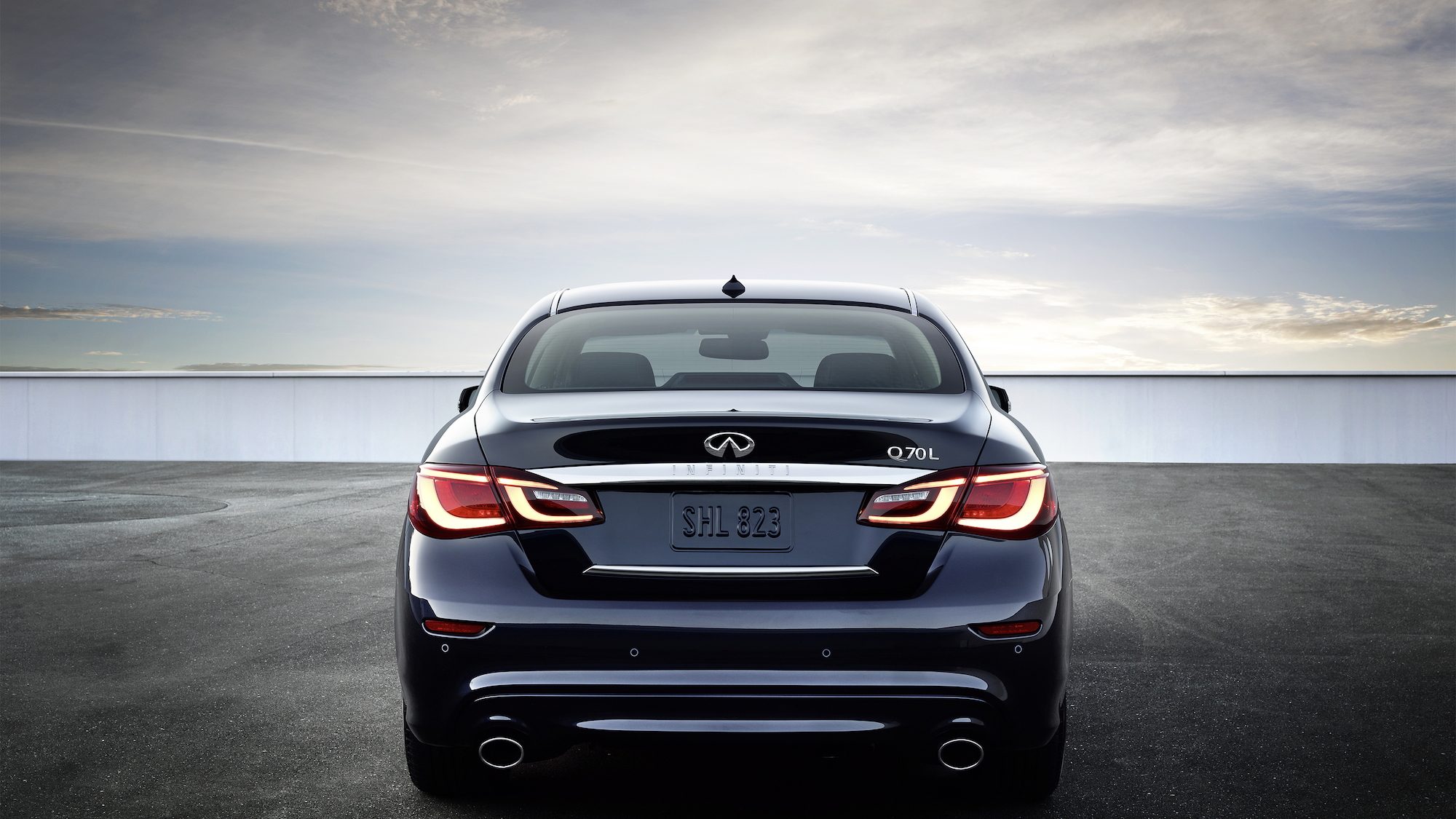 26
photos
Infiniti has revealed details of its latest Q70, updated for the 2015 model year with a subtle styling refresh and the option of a long-wheelbase model. These join a raft of standard safety features to ensure the Q70 remains competitive in an ever more advanced market sector.

Only the eagle-eyed will spot most of the car's exterior changes, the Q70 largely keeping Infiniti's signature flowing curves and sharply-contoured hips as before. The Q70 does get a new set of headlights though, and a redesigned "double arch" grille has a new three-dimensional look thanks to its waved mesh finish. The front bumper has also been reworked, with new foglight units integrated into a chrome detail low on the bumper.

At the rear, there's more light-work, with a distinctive LED signature highlighting each unit. The top of the trunk lid has been flattened off and the bumper slimmed down in an attempt to make the car look longer and lower. Throw in a redesigned chrome strip and you're there, while sport models get a new, wider front bumper, a set of 20-inch alloy wheels and low-profile tires, and an "athletic" rear bumper design finished in high gloss black. The upshot of all this work is a low drag coefficient--from 0.26 for the hybrid, to 0.28 on the Sport.

The subtle changes continue inside--unless you opt for the new long-wheelbase version that is, where the extra 5.9 inches of legroom is much more apparent. Knee room is increased to 32.4 inches, a class-best figure, while clambering in and out is made easier by larger rear doors with an auto-closing feature. Other rear-seat features include heated seats, reading lights and a 12v power outlet.

All new Q70s benefit from extra sound insulation, improved sealing and stiffer wheels, in an effort to reduce road noise. This aspect has been enhanced further with Active Noise Control to cancel out exterior hums to those inside. Handcrafted wood and leather is standard across the range, as is a 7-inch full-color driver information display. Driver and front passenger also get ten-way adjustable heated seats. Features such as Enhanced Intelligent Key, Bluetooth, dual-zone automatic temperature control, Infiniti Hard Drive Navigation System and Infiniti Connection telematics return for the 2015 car.

As ever, tech features heavily too. New to the Q70 following introductions on other Infiniti and Nissan models, the Q70 features Predictive Forward Collision Warning, Around View Monitor (for 360 views around the car when parking), Backup Collision Intervention to prevent backup accidents, and Forward Emergency Braking to mitigate the risk of forward collisions.

The 2015 Infiniti Q70 makes its debut at the 2014 New York Auto Show, where Infiniti will also show an updated 2015 QX80. For more of our coverage, head to our dedicated hub.