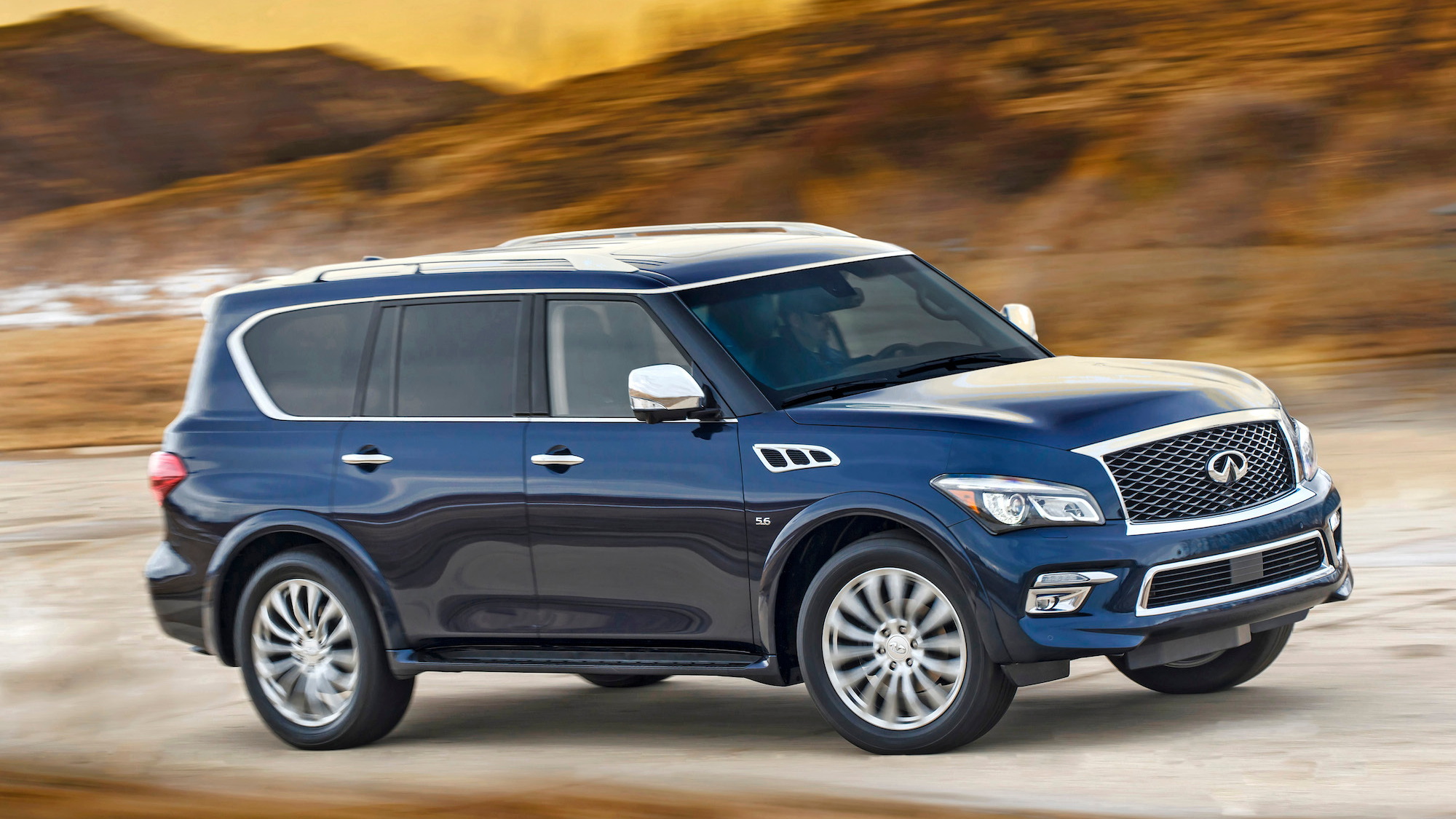 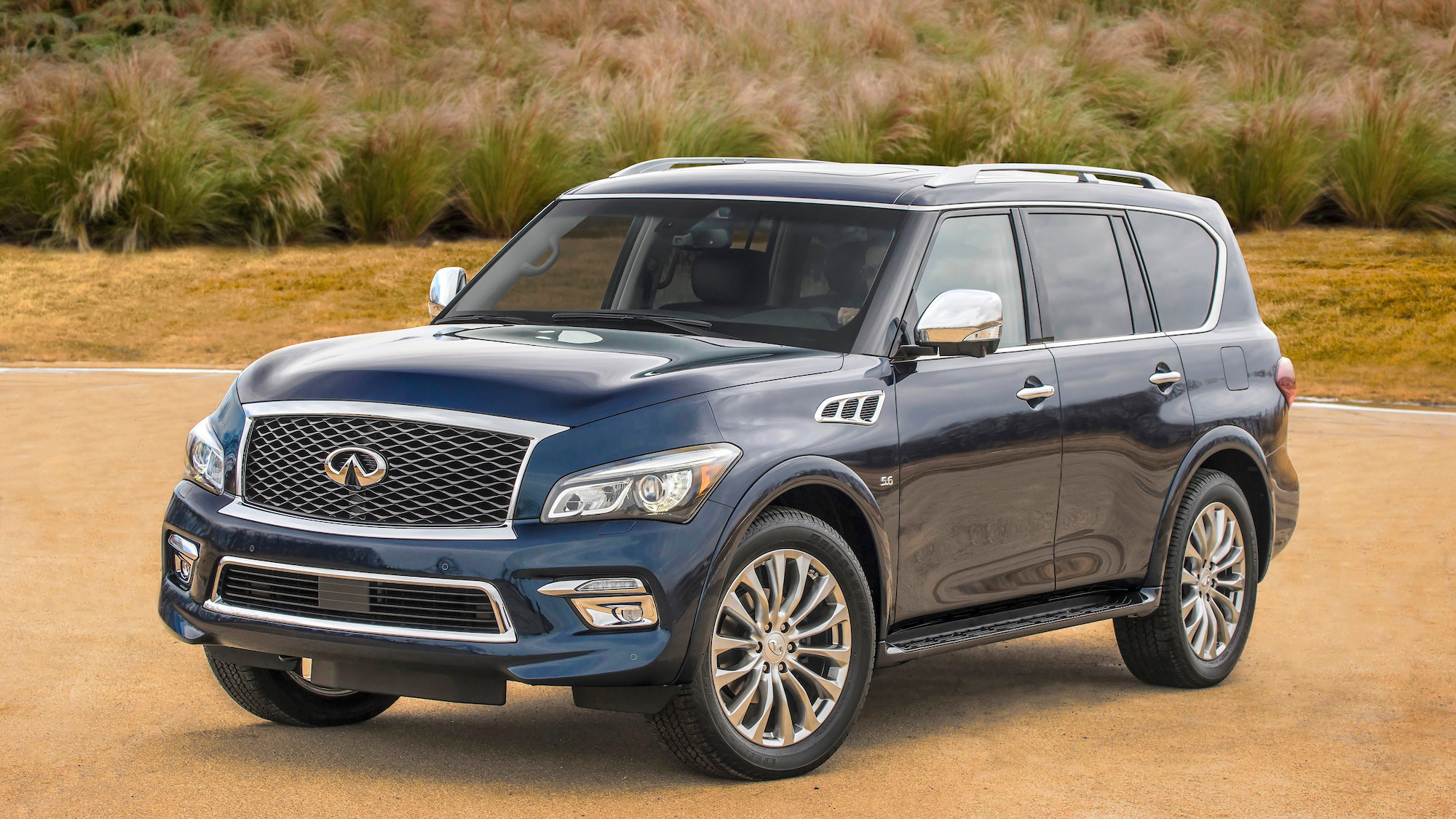 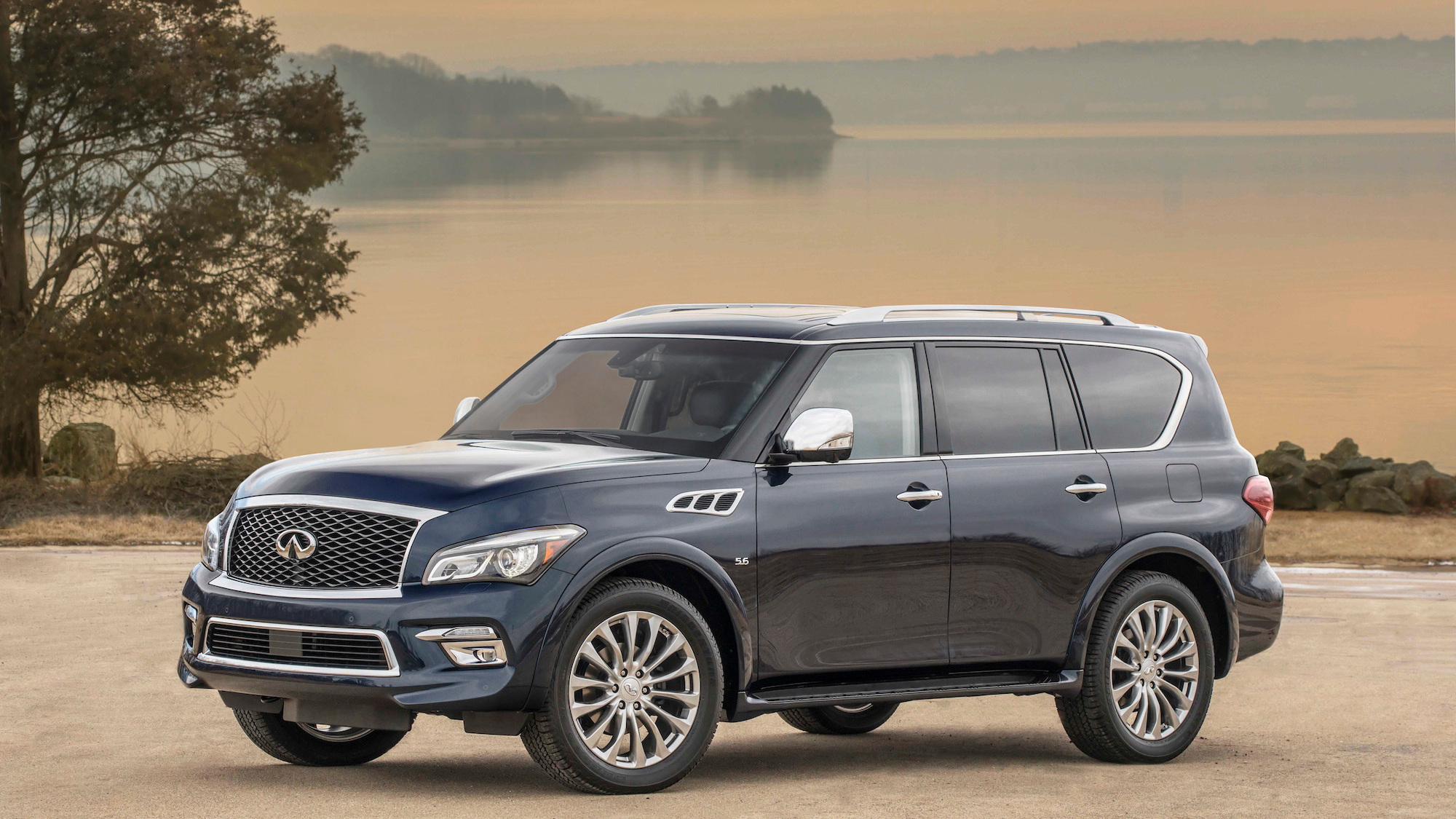 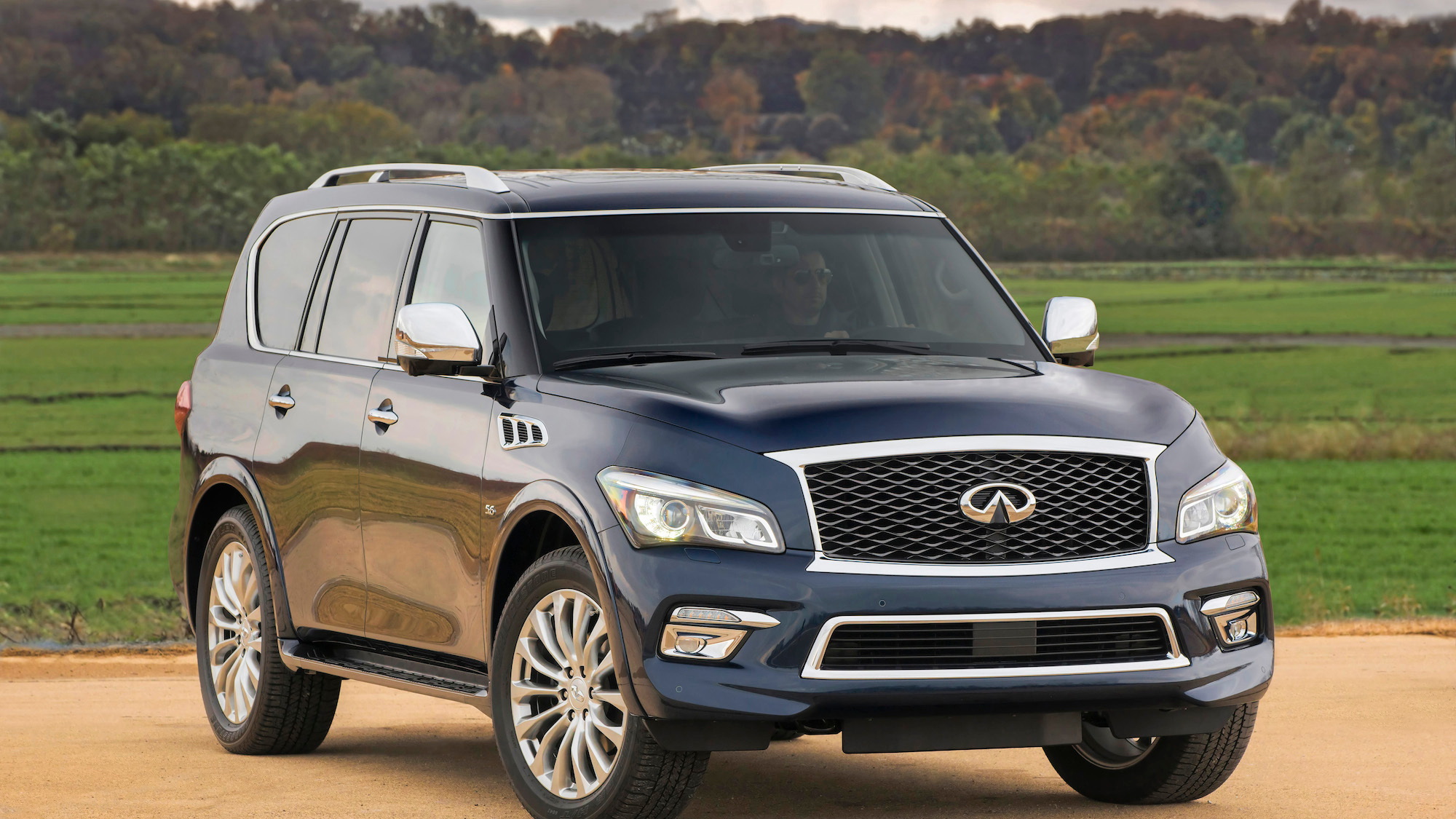 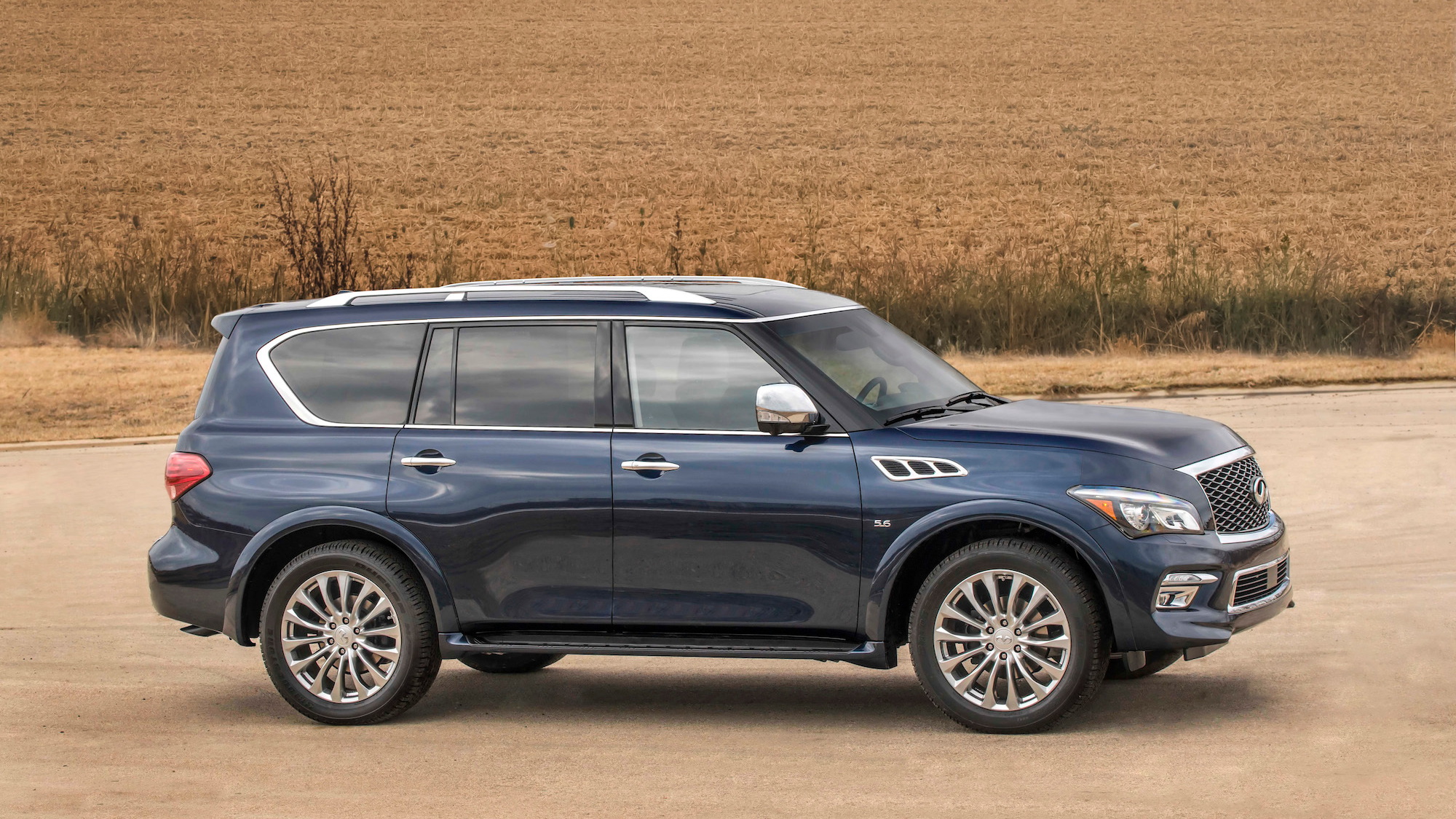 Infiniti is using this week’s 2014 New York Auto Show to introduce updated versions of its Q70 sedan and QX80 SUV, with the latter offering a new range-topping ‘Limited’ model. Both models are being introduced for the 2015 model year and come with a number of changes to their exterior styling, more luxury amenities and new tech.

In case you’re still not fully up to date with Infiniti’s revised naming strategy, the Q70 was previously the M sedan while the QX80 was previously the QX56 SUV. You’ll be able to recognize the latest 2015 models from their front-end styling, which now more closely resembles that of the Q50 sedan.

For the 2015 QX80, LEDs are used for the main headlight function, turn signals and fog lights,  and a new bumper with flush-mounted sonar sensors has been fitted. The side mirror housings also come with chrome plating on some trim levels. The 2015 QX80 also offers new wheel designs (20- and 22-inch sizes) and three additional exterior colors: Hermosa Blue, Graphite Shadow and Majestic White.

The 2015 QX80’s interior refinements and revised grade level content reflect input from current owners, who have requested greater visual differentiation between trim offerings and more choices in the optional technology groupings. Leather trim and wood accents are still offered, and are joined by a new steering wheel trim as well as contrast stitching on select models.

The 2015 QX80 also gets a number of new technologies, either standard or available. These include adaptive headlights that automatically dip the high beams if another vehicle is approaching, and a collision warning system that can detect if an accident is imminent with an object ahead of the vehicle. Other tech features include brake assist, a backup collision warning system, adaptive cruise control, and blind spot and lane departure warning systems.

All 2015 QX80s come with a 5.6-liter V-8 delivering 400 horsepower and 413 pound-feet of torque, with drive going to either the rear wheels or all four via a seven-speed automatic transmission. The engine’s numbers might not seem high, but it’s enough to tow up to 8,500 pounds and provide adequate performance for this big and burly three-row SUV.

The new 2015 QX80 Limited, as its name suggests, will be a limited-production model. It features a number of unique exterior elements, such as a dark finish for the headlight surrounds, but the real highlight is the interior. It gets a unique Truffle Brown cabin marked by a palette of brown, black and silver leather and wood appointments and trim. The seats feature quilted leather with silver accent piping, and even the speaker grilles on the instrument panel have been leather-wrapped. The headliner, meanwhile, features a suede-like material.

Opting for the QX80 Limited also means you get most of the Infiniti SUV’s available features and packages. As Infiniti explains, the QX80 Limited comes with all of the standard features and equipment of the QX80 AWD, the most well equipped of the regular models, and then it also gets a Driver’s Assistance Package, Theater Package, Deluxe Technology Package, and 22-inch wheels.

The 2015 Infiniti QX80 will hit showrooms in the fall.

If you're looking for more 2014 New York Auto Show coverage, head to our dedicated hub.