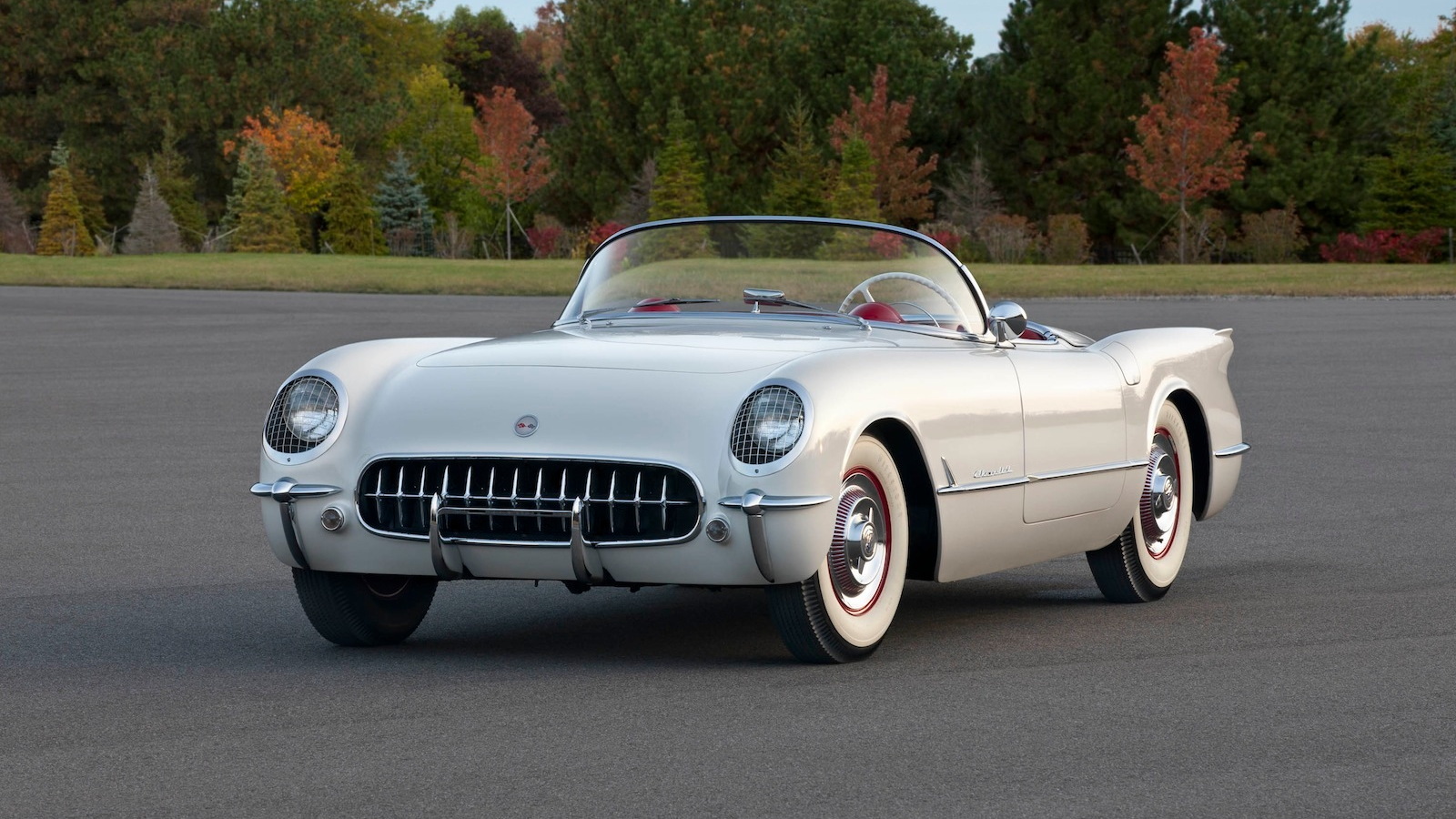 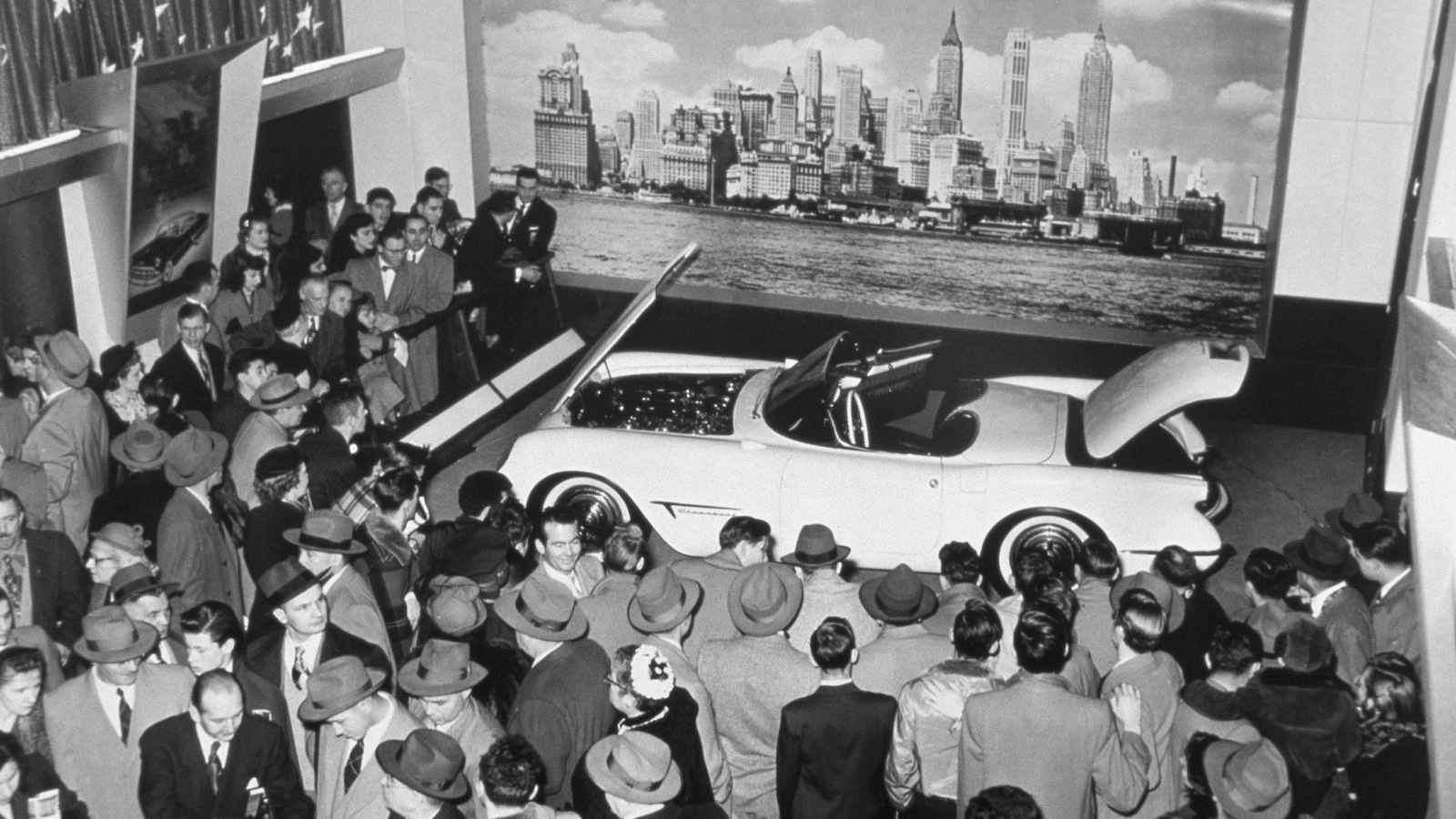 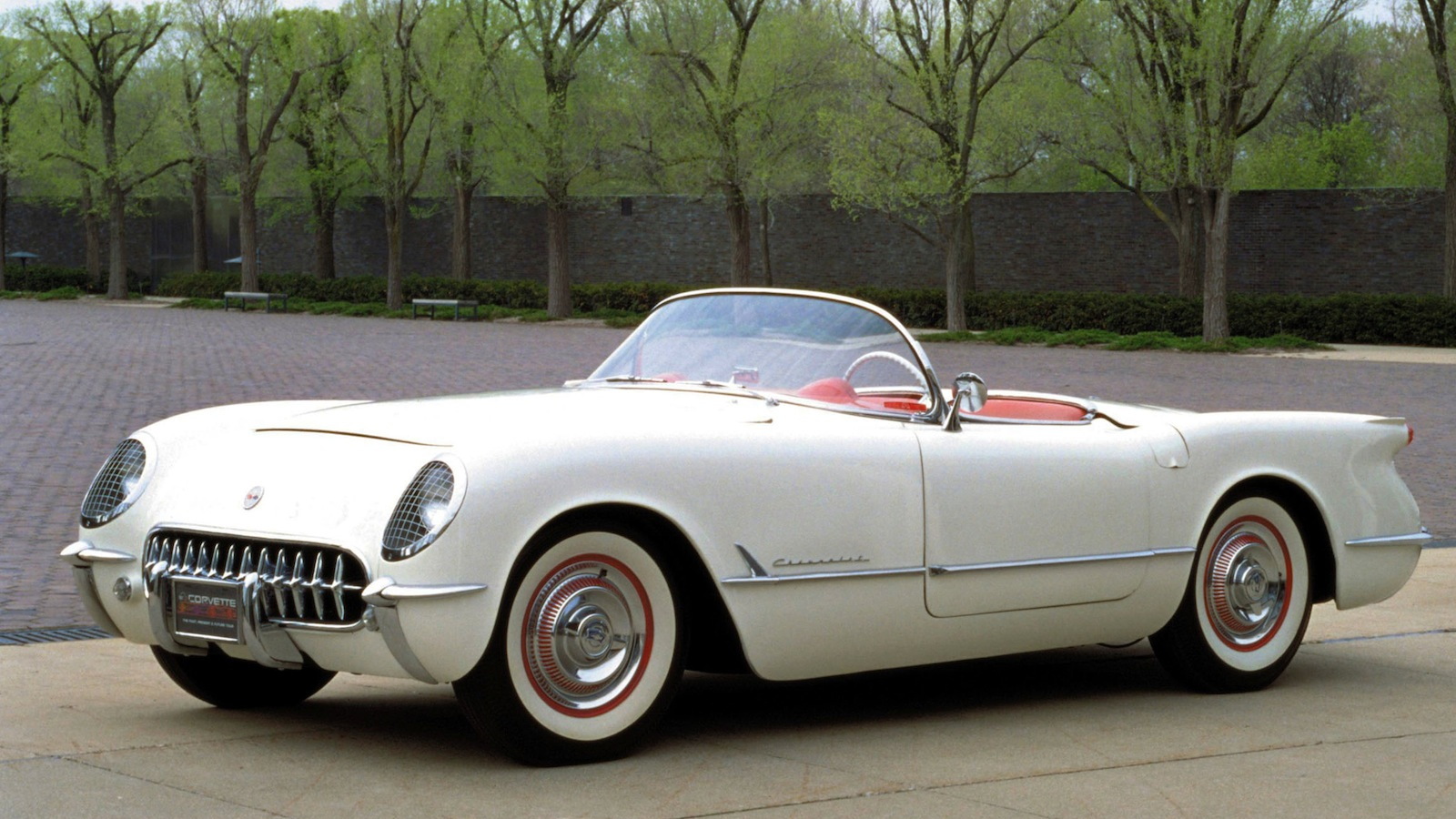 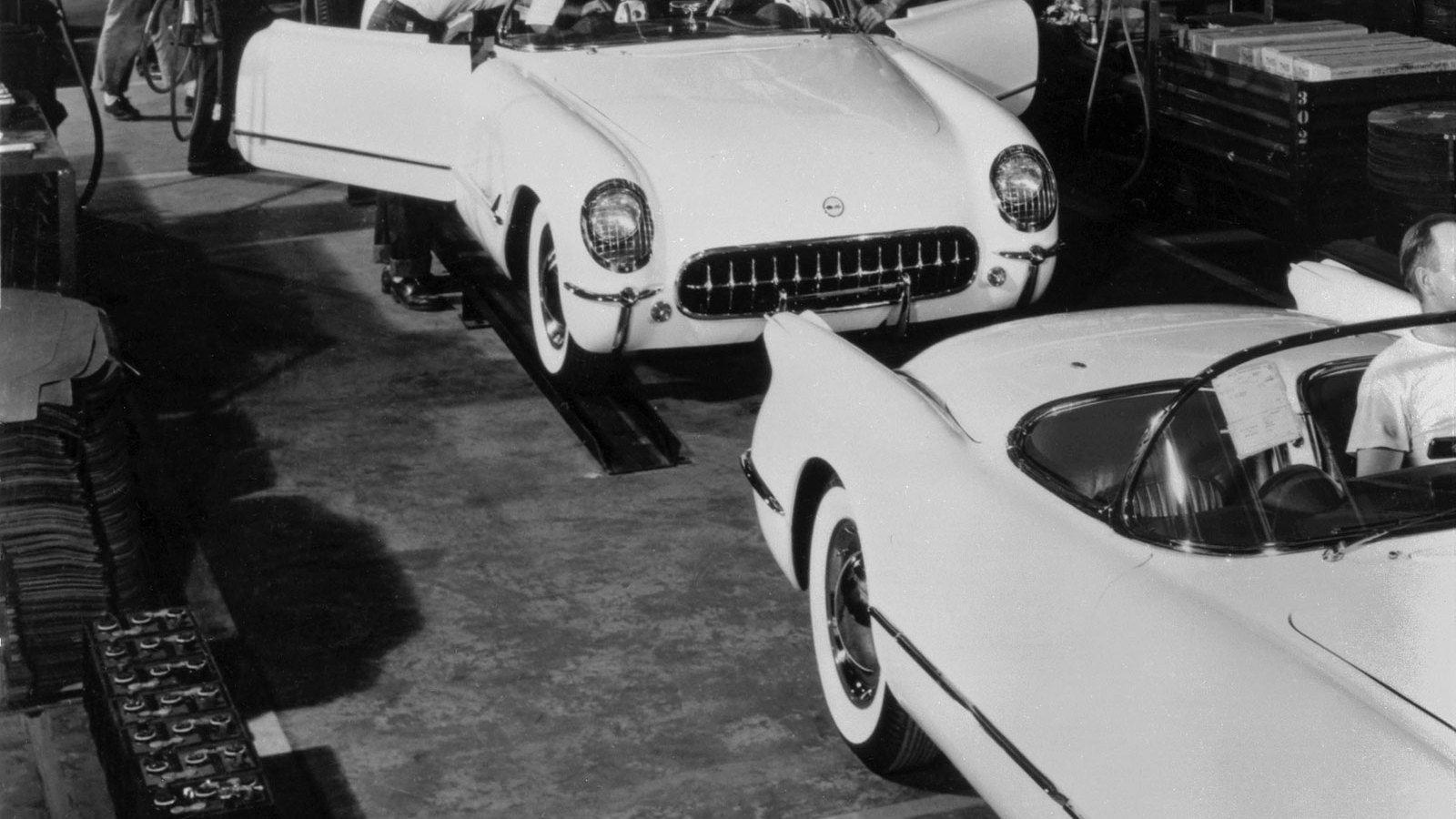 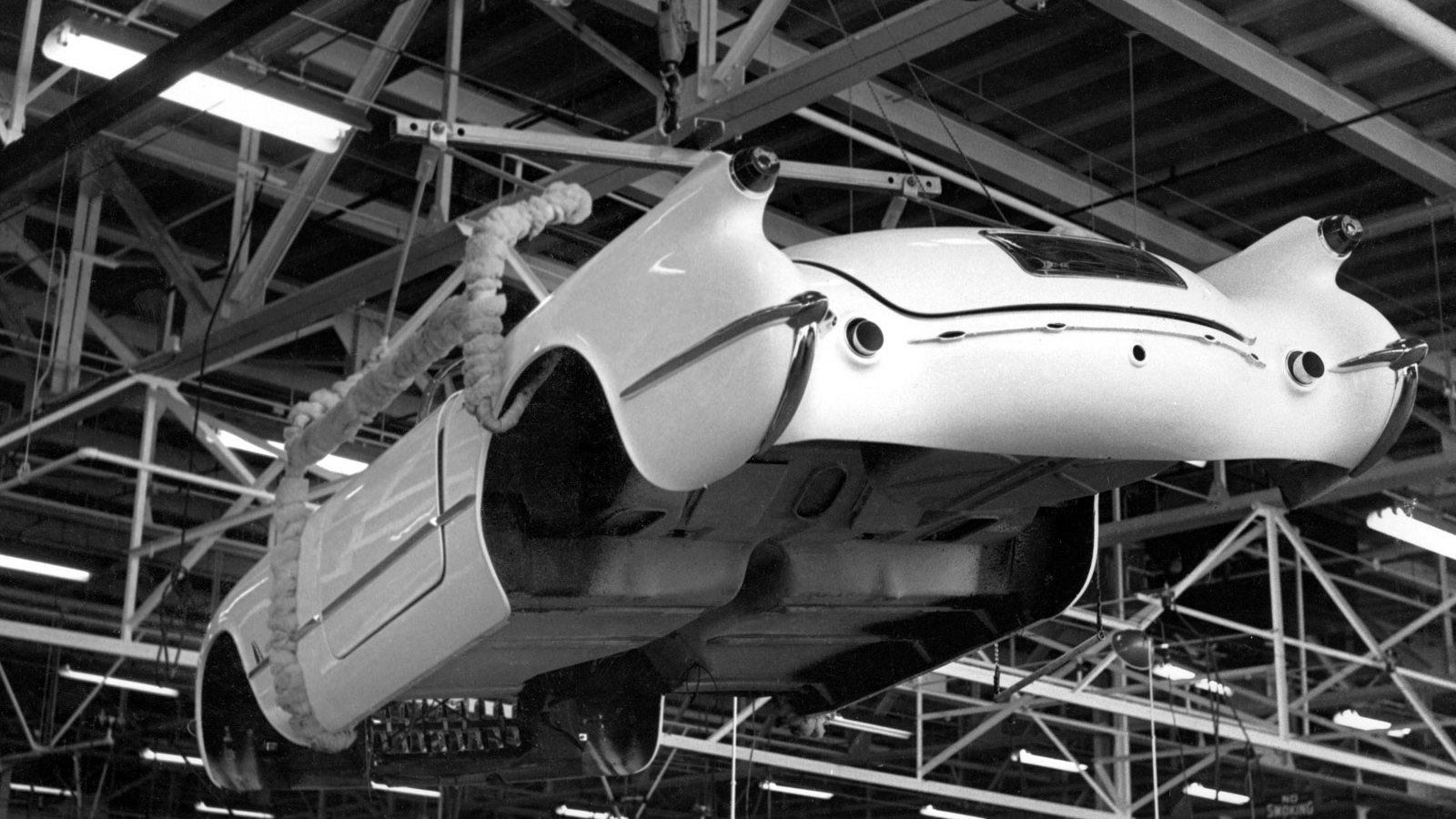 63
photos
As we welcome the latest heir to the Corvette throne of American sports car greatness, it's worth taking the time to look back at the previous six generations to see where the new Stingray plants its roots.

Production of the 1953 Chevrolet Corvette, the very first Corvette

The first generation of the Corvette (1953-1962) bears little resemblance to today's vents-and-edges look, but it still sings the song of the early '50s with a clear and piercing voice. The interior is especially attractive for those that fans modern sports cars too polluted with infotainment and other technology that relates to everything but the driving experience. It's simple almost to the point of being spartan, but it's elegant and timeless despite being of a definite period.

The second generation (1963-1967) saw the Corvette truly hit its stride. Design traits that hold through to today were born in this era, though arguably the most famous of these was built for just one year: the split-window 1963 Sting Ray. The Sting Ray name itself was also launched with the second generation, and carried through to the third as the one-word Stingray.

Farrah Fawcett and the 1970 Chevrolet Corvette

Generation three (1968-1982) was a case of one step forward, three steps back for the Corvette brand and its image. Despite a dramatic, modern look at its launch, a confluence of questionable build quality and smog-related regulatory neutering saw the 'Vette turn into a bit of a self-parody, all show and no go. This generation clung to life for 14 years, but nearly ended in the demise of the Corvette altogether.

Fortunately, GM's gearheads prevailed and the Corvette persevered into its fourth generation (1984-1996), seeing a great deal of improvement in both performance and construction compared to the third-gen car. The all-new look and feel began the new era of Corvette design themes, with a long, wedged nose and a high, chopped tail bookending sleek and simple coupe lines.

Evolved from the fourth-generation car, but with a decidedly new take on style, handling,  and power, the fifth-generation Corvette (1997-2004) finished the job of repairing the car's reputation begun by the C4. Finally recognized as a world-class sports car (at least on capability, if still not on interior design and quality) again, the C5 Corvette set a new benchmark for performance value.

The sixth-generation Corvette (2005-2013) saw the continuation of the Corvette's world-beating reputation, especially with the launch of the ZR1 in 2009. The 638-horsepower beast paired the best of American muscle with the best of American handling know-how for a true supercar that took the world's track records by storm. Still priced at about half the going rate of the more exotic competition, the C6 Corvette again raised the bar and set a new standard for performance and value--though issues with interior design and quality continued to plague the car and its owners.

Now we're at the birth of the seventh generation of the Corvette, and all of the indicators are very, very good. With a modern, high-tech, edgy exterior and a completely revamped interior that rises to true luxury levels of fit, finish, and material use, the 2014 Corvette offers more performance and more raw emotion than anything else in the $52,000 bracket. The Stingray name returns, too, and thankfully, it's the only aspect of the C3 Corvette that appears to have stuck in the family genes.

For more details on the seventh-gen car, read our 2014 Corvette Stingray first drive.