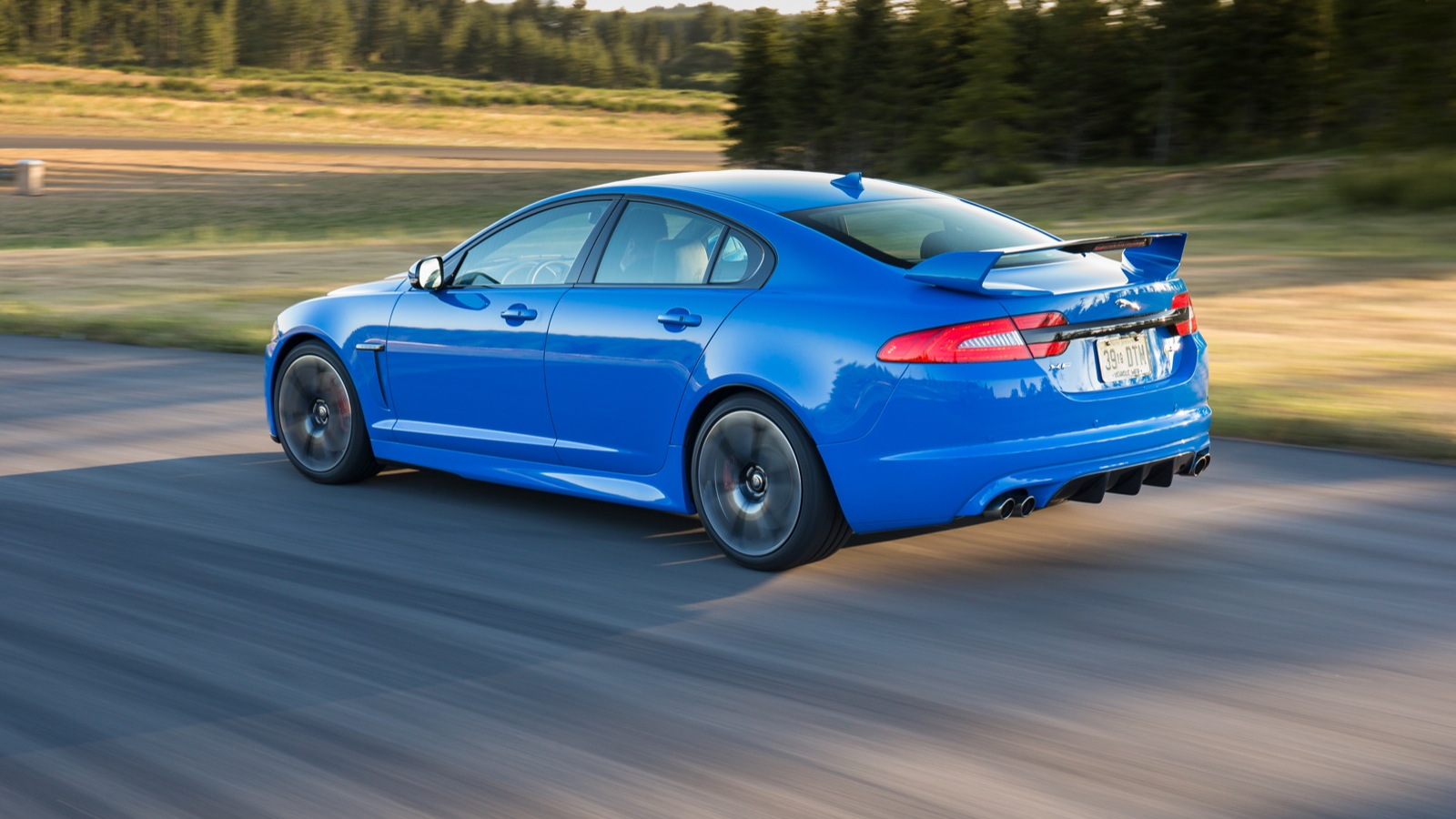 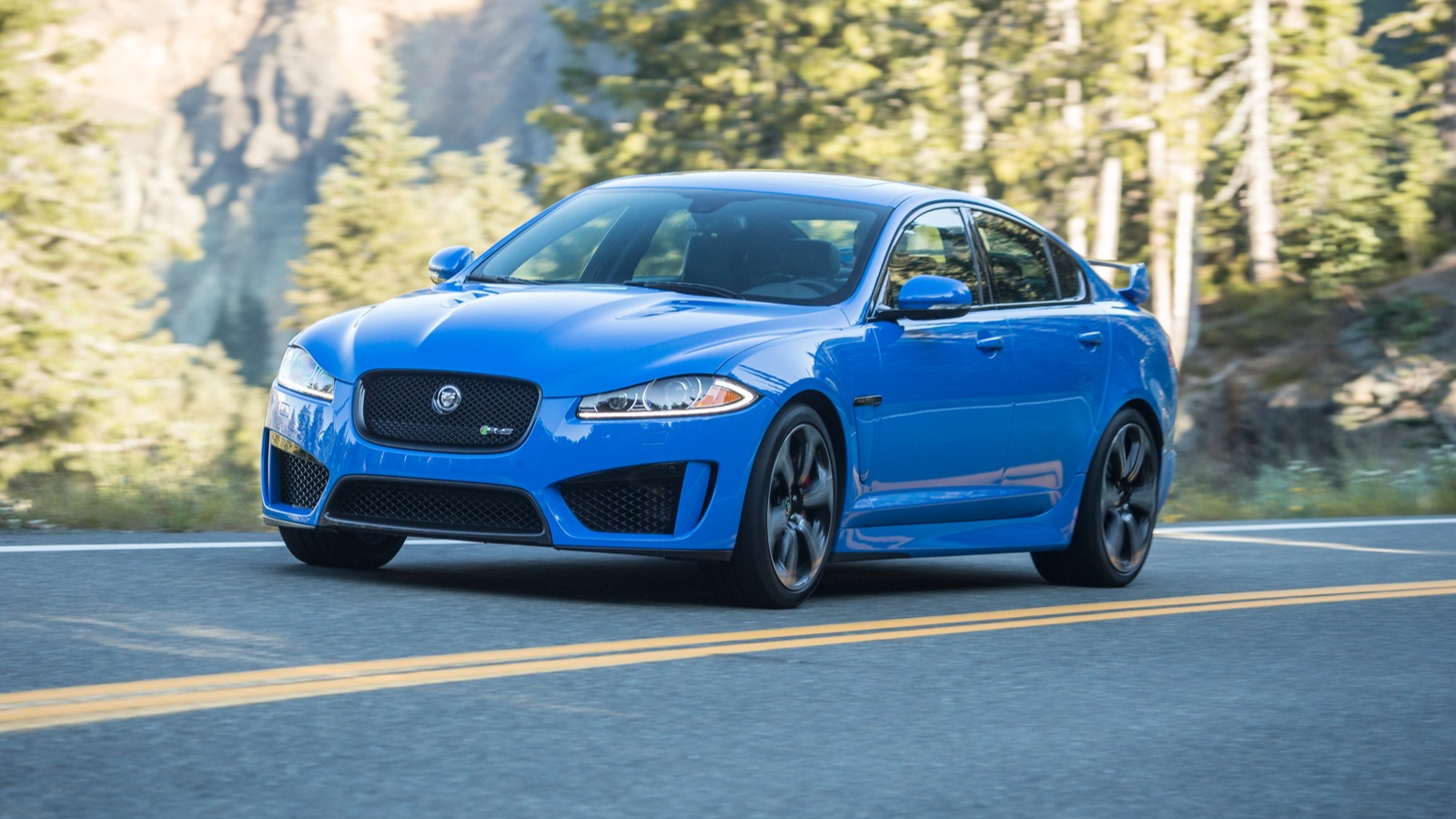 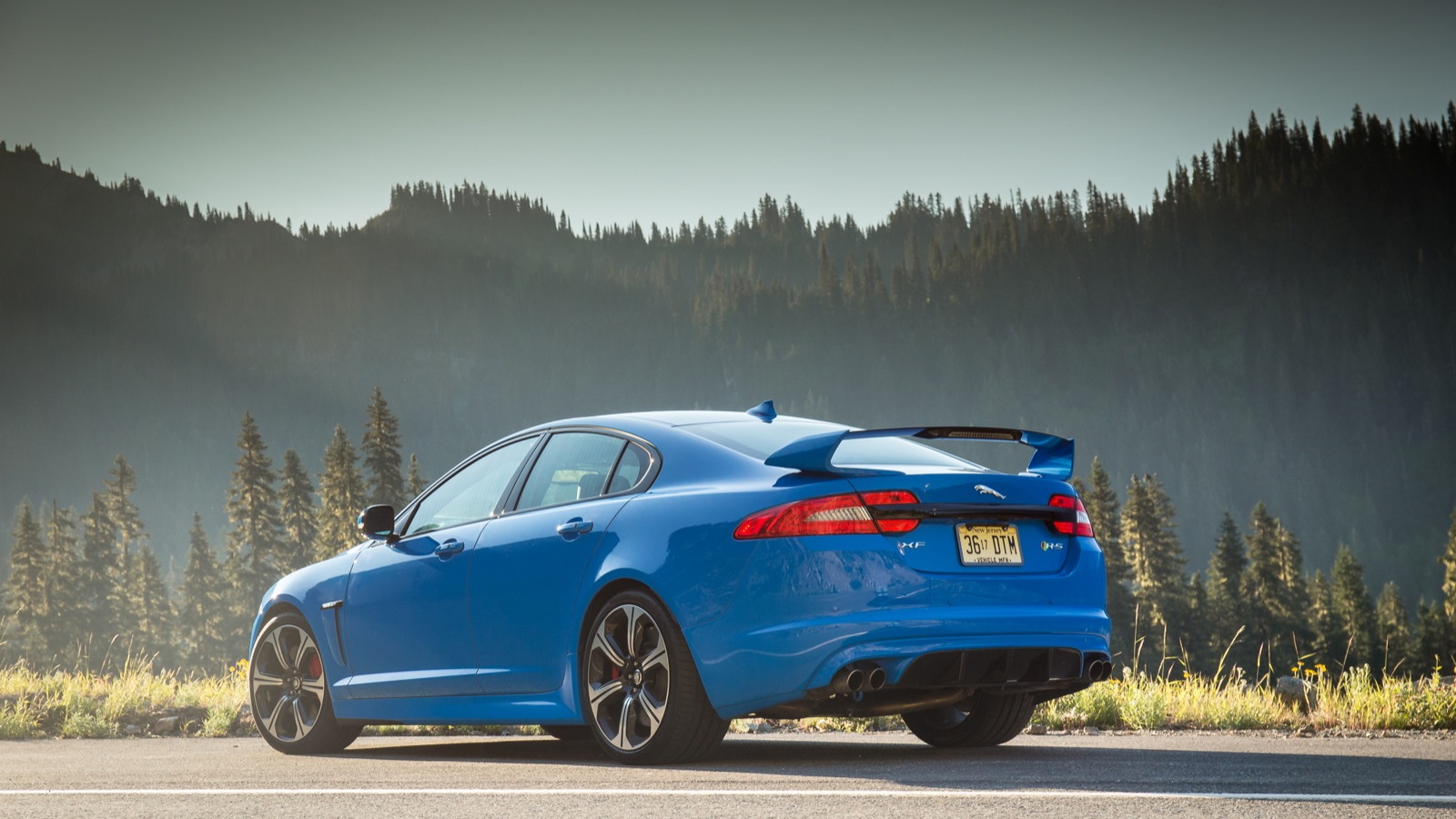 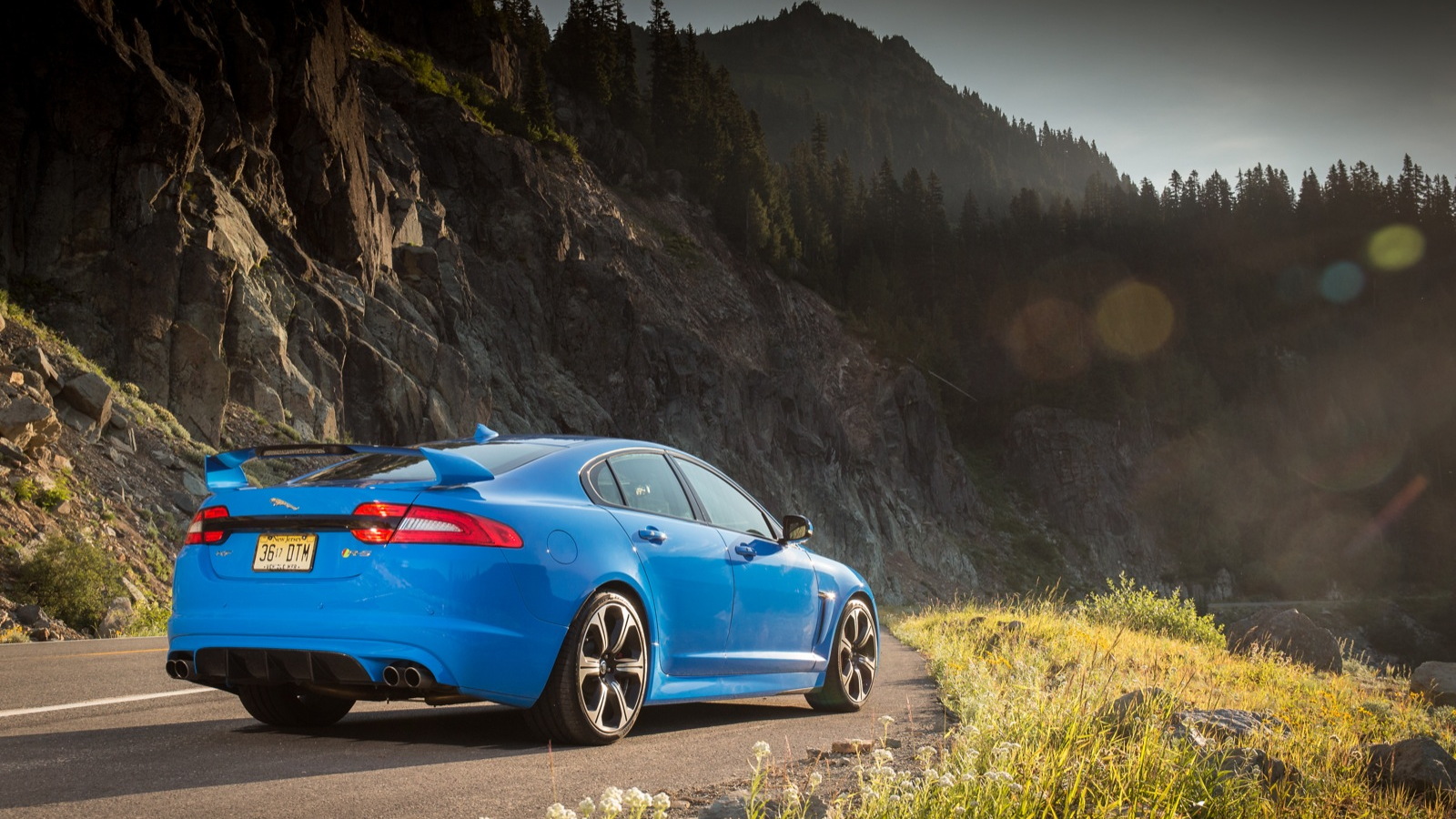 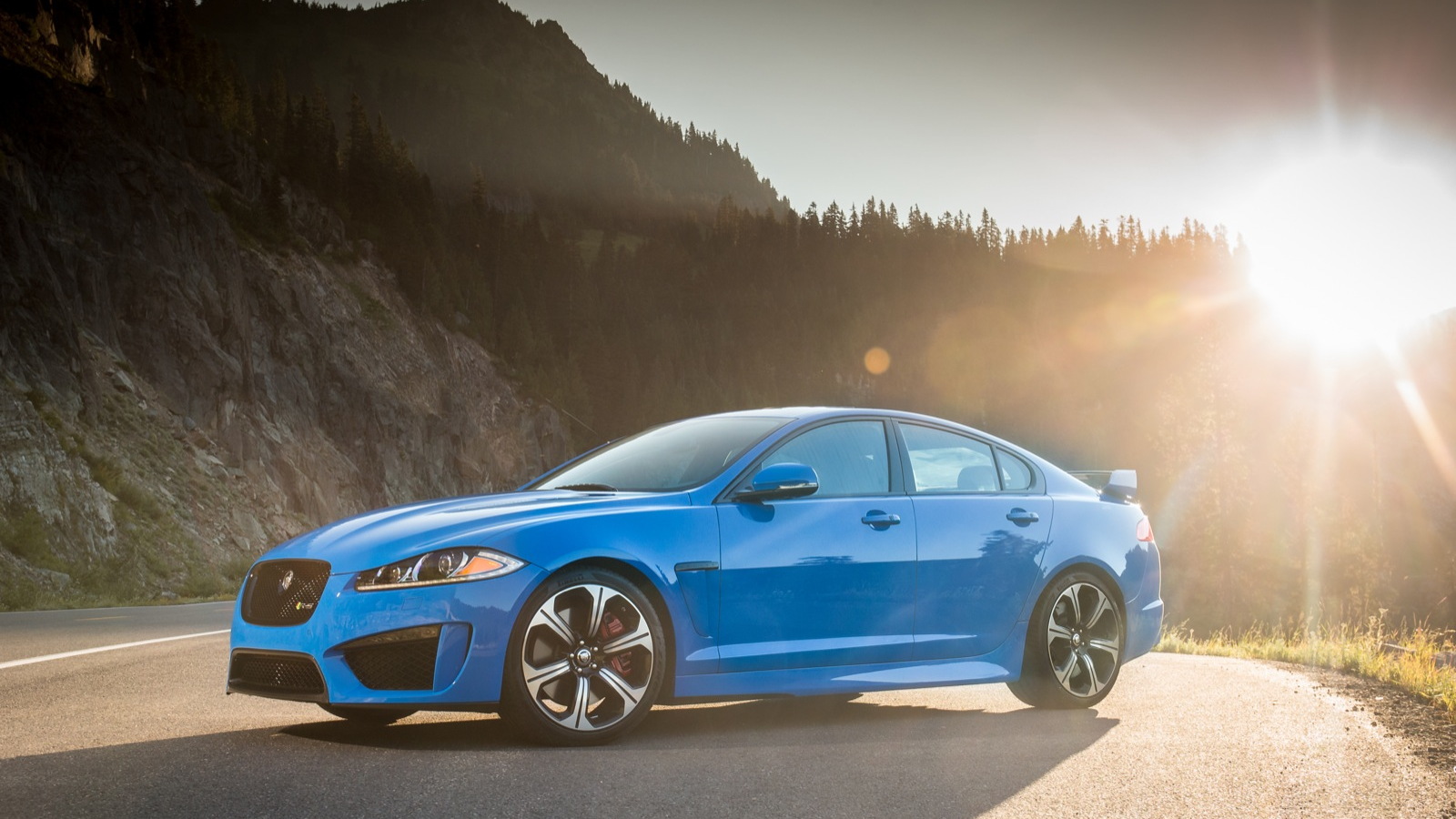 34
photos
Spend around a hundred grand on a performance sedan, and it had better put a smile on your face, right?

After driving the 2014 Jaguar XFR-S up on Pacific Northwest mountain roads, as well as on the track, we can say that this very focused model—the fastest, most powerful Jaguar sedan ever—never ceased to have us grinning. A wicked grin, at that.

If you're not already familiar with the idea, the XFR-S is a serious, rather edgy (or about as edgy as Jaguars get) model that pushes the performance envelope further upward from the XFR. But it isn't simply chasing German super-sedans. From the driver's seat, we found it more thrilling (and satisfying) than some key rival models like BMW M5, Audi RS 6, or Mercedes-Benz E63 AMG.

Those each might have a slight edge on the XFR-S in straight-line performance, but the XFR-S is the wild child of the bunch, the one that keeps you close at heart. From the time you press the engine-start button and the big 5.0-liter supercharged V-8 barks to life, it's clear that the attitude is a bit different behind the wheel of this one.

Charm in what's not on board

It's probably best to start with what the XFR-S doesn't have. Thankfully there's no managing a slew of drive modes and steering heft levels and suspension rates. There's nothing complicated about the steering, either; it's merely a very good hydraulic system. And don't expect a dual-clutch gearbox or clutch packs in place of torque converters.

What you do get is a raucous 550-horsepower V-8 that's not only full of character but fully fitting the character of the car, mated to a ZF eight-speed automatic transmission with Jaguar's new (F-Type-derived) Quickshift logic to intuit corners, and a handful of meaningful changes to the suspension and running gear.

Front and rear spring rates have been boosted 30 percent over the XFR (which adds up to about 100 percent over the base XF), and the XFR-S get special front suspension knuckles that allow increased camber and castor stiffness (plus new wheel bearings), a new rear subframe, and a 'bespoke' staggered Pirelli P Zero tire setup—265/35R20 size in front and 295/30R20 in back. Special lightweight forged wheels and a high-performance braking system round out the improvements.

In addition, there are a series of functional aerodynamic improvements, including carbon fiber front splitter and air intakes, plus a carbon fiber rear diffuser.

Boy racers, get a load of this wing

And that big wing on the back? It plays a crucial part in reducing high-speed lift by 68 percent. It makes a very meaningful contribution to stability at mid- and upper-triple-digit speeds; but because of the controversy over...um...the boy-racer stigma that tall, bold rear wings carry, it's optional on the XFR-S—and a hefty $3,500 extra. But if it's functional, you really must get it.

Output of this engine has been boosted to 550 hp, with 502 lb-ft of torque (versus the XFR's 510 hp and 461 lb-ft); and it's a difference you can feel. Through breathing improvements, Jaguar has boosted power delivery from the 3,000-rpm range on up. And on the torque side, it's essentially taken the torque plateau of the XFR's engine and allowed it to climb—together with the more aggressive throttle map, allowing that very sharp at-speed throttle response, and allowing increased rewards for revving the engine into its upper ranges.

Revving this engine is something we couldn't resist. It's beautiful-sounding from the outside or the inside. Curiously, from the outside there's a strident, V-10-like pulsation to the exhaust note that sounds sexy and different as it passes by at full wail; but inside, selectively ducted-in intake noise helps provide a deep, bellowy exhaust note that's unmistakably a V-8. What you do hear from inside the cabin—especially if you tip into the throttle lightly and then back off—are a series of burbles and pops that seem so forceful at times you might think someone's kicking in the trunk.

Provided you're not tapping into the engine's power too much, the cabin is remarkably quiet and luxury-car composed. Despite the much stiffer setup, very little harshness from the coarse road surfaces we had for much of our road drive route made it inside, and the XFR-S's active damping system (which has thirteen different inputs and can make adjustments 100 times per second) manages to filter out minor imperfections.

Take the XFR-S through a series of esses, and the strength of this model's steering are exposed. It's a hydraulic system, and yes, it could be firmer during most normal driving (it feels disconcertingly light for a performance car at first), but just off center, at speed, it's weighted nicely. Body control is far more in check than you might expect given the lack of fluster in the ride.

Get the XFR-S out on the track, which we did at The Ridge Motorsports Park in Shelton, Washington. There, the full course offered some especially tight turns for exploring this sedan's dynamics as well as a long straight where we could dip well into triple digits (and put the stronger brakes to good use).

On the XFR-S's rotary shifter, you simply have a choice between Drive and Sport (with some great steering-wheel paddle-shifters). Then there's a Dynamic mode that sharpens the powertrain response and firms up damper rates. It also affects the stability control behavior, and the active electronic differential, which helps get power to the rear wheels in the most effective way possible out of corners. 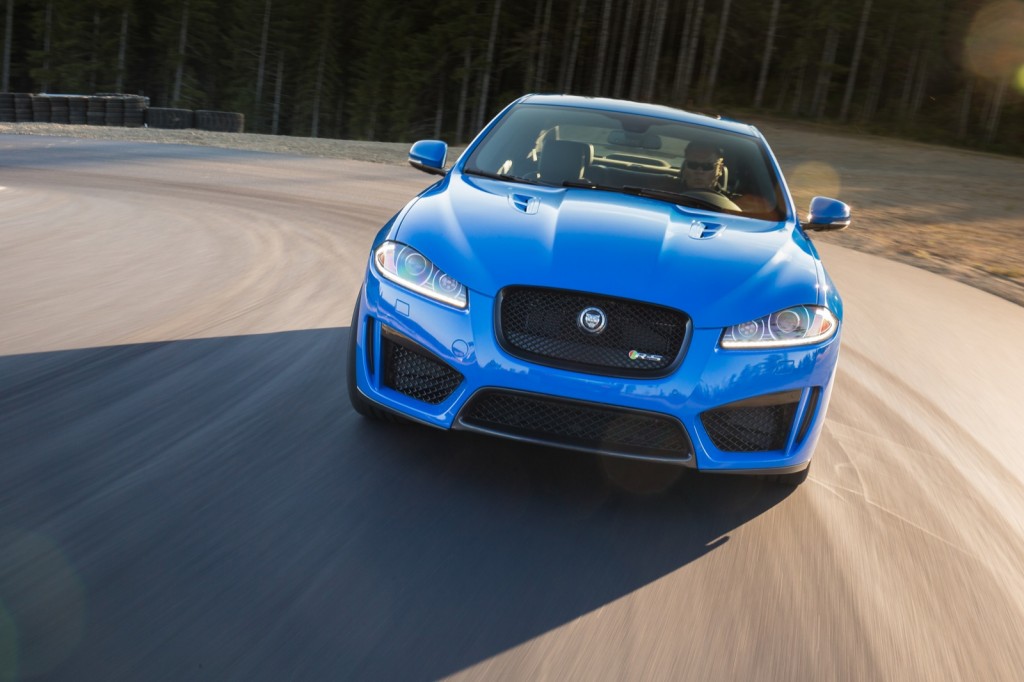 What did we learn out there? The XFR-S might not be an easy car to drive near its limits, but it's an easy car to drive fast—very fast. It's a natural understeerer at its limits, but there's no doubt that with more laps we would have been able to learn the ins and outs of finessing the tail out just right. But even in Dynamic mode, with the stability control in its less intrusive setting, you make modest corrections that leave it feeling remarkably neutral once you set it up on the inside line of a bend.

Coming down from the adrenaline surge of track time it's worth taking a step back to see what separates the S from the XFR. Special Varuna lightweight forged alloy wheels are one of the showpieces, and they can be finished in full gloss black or technical gray. In addition to the rear wing and central rear diffuser, there are five colors, including an especially eye-catching French Racing Blue. And inside, the XFR-S gets Warm Charcoal leather seat and door trim, in addition to carbon-affect leather on the seat bolsters and armrests. Contrast-color micro-piping also accents the seats, and there's a Dark Aluminum dash fascia.

In all, the XFR-S is wicked fast and full of attitude, yet its luxury and comfort are seemingly uncompromised. Whether you think of the XFR-S as a more opulent, exclusive alternative to the Cadillac CTS-V or a more charismatic choice than those top-performance sedans from Germany, we have no doubt that with only 200 cars allocated for the U.S., this special-edition XFR is going to sell out quickly.