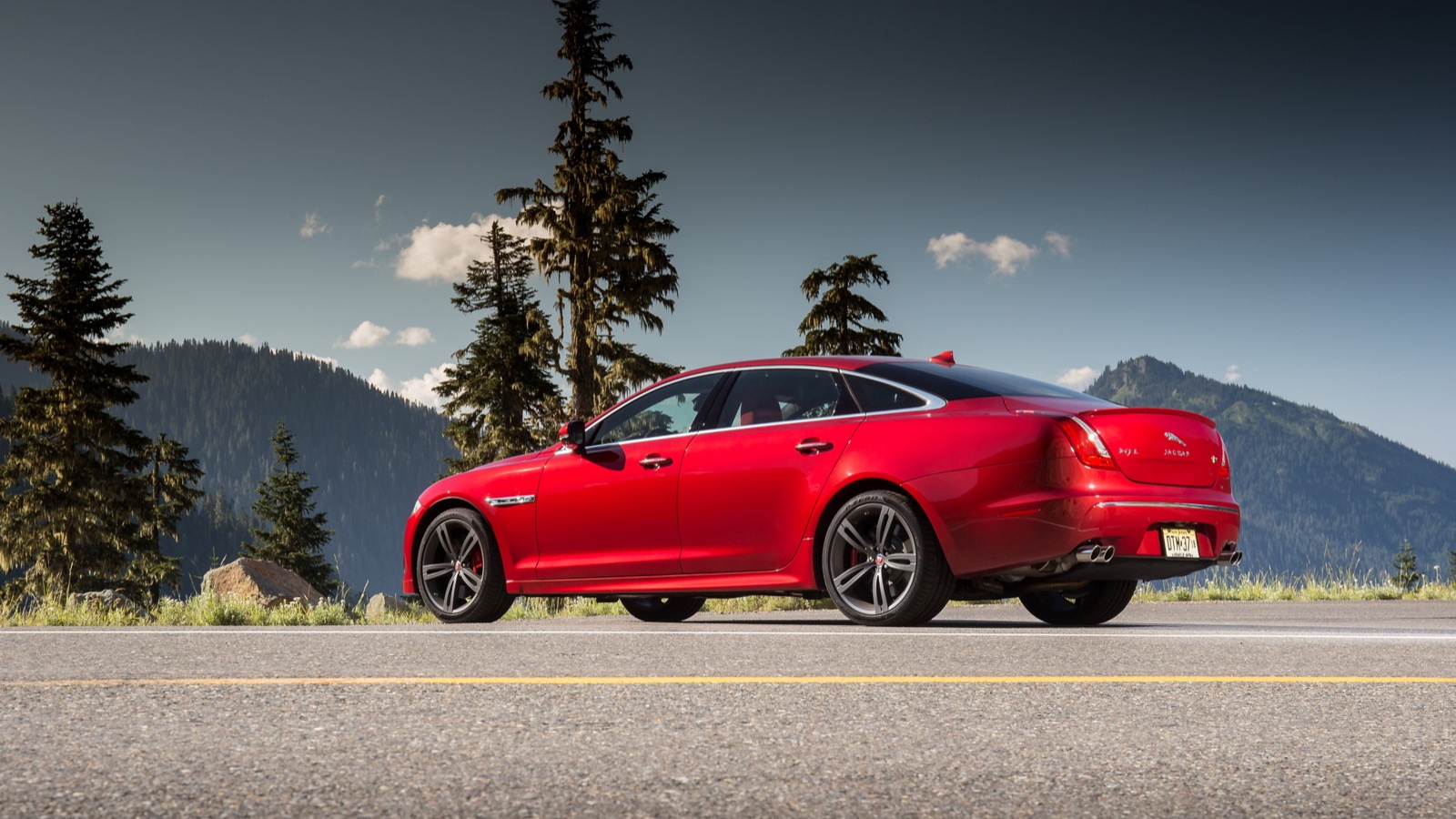 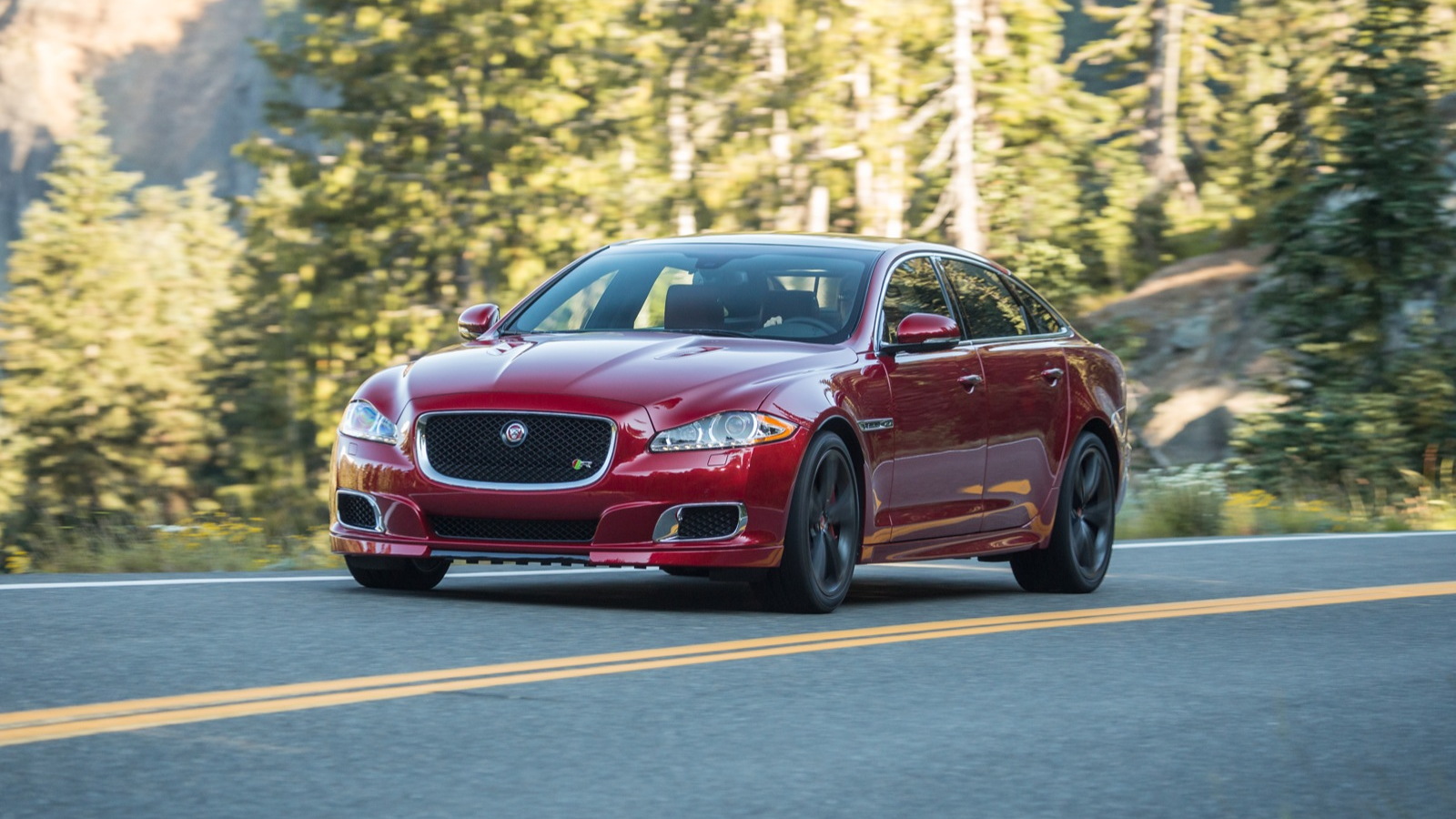 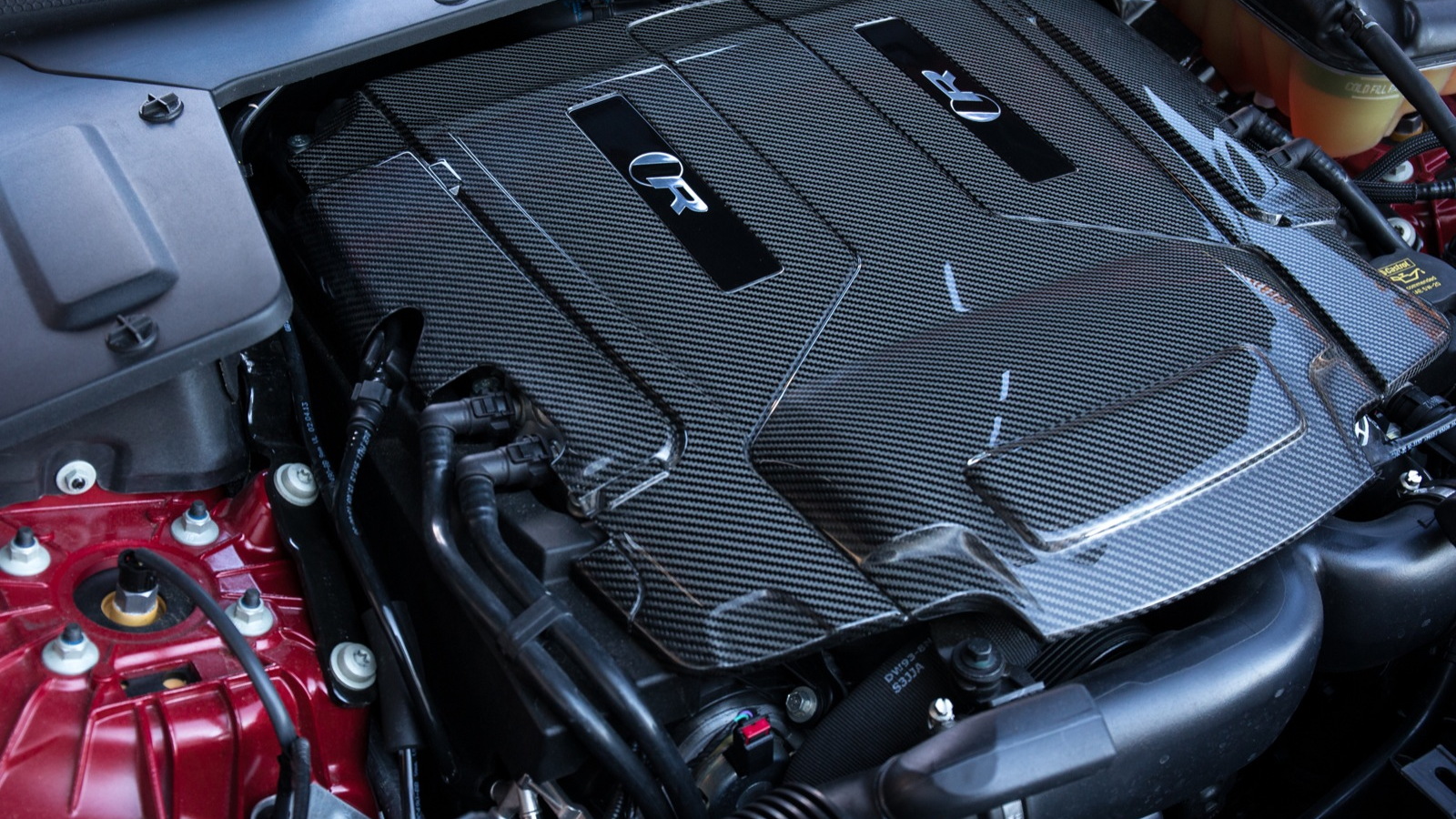 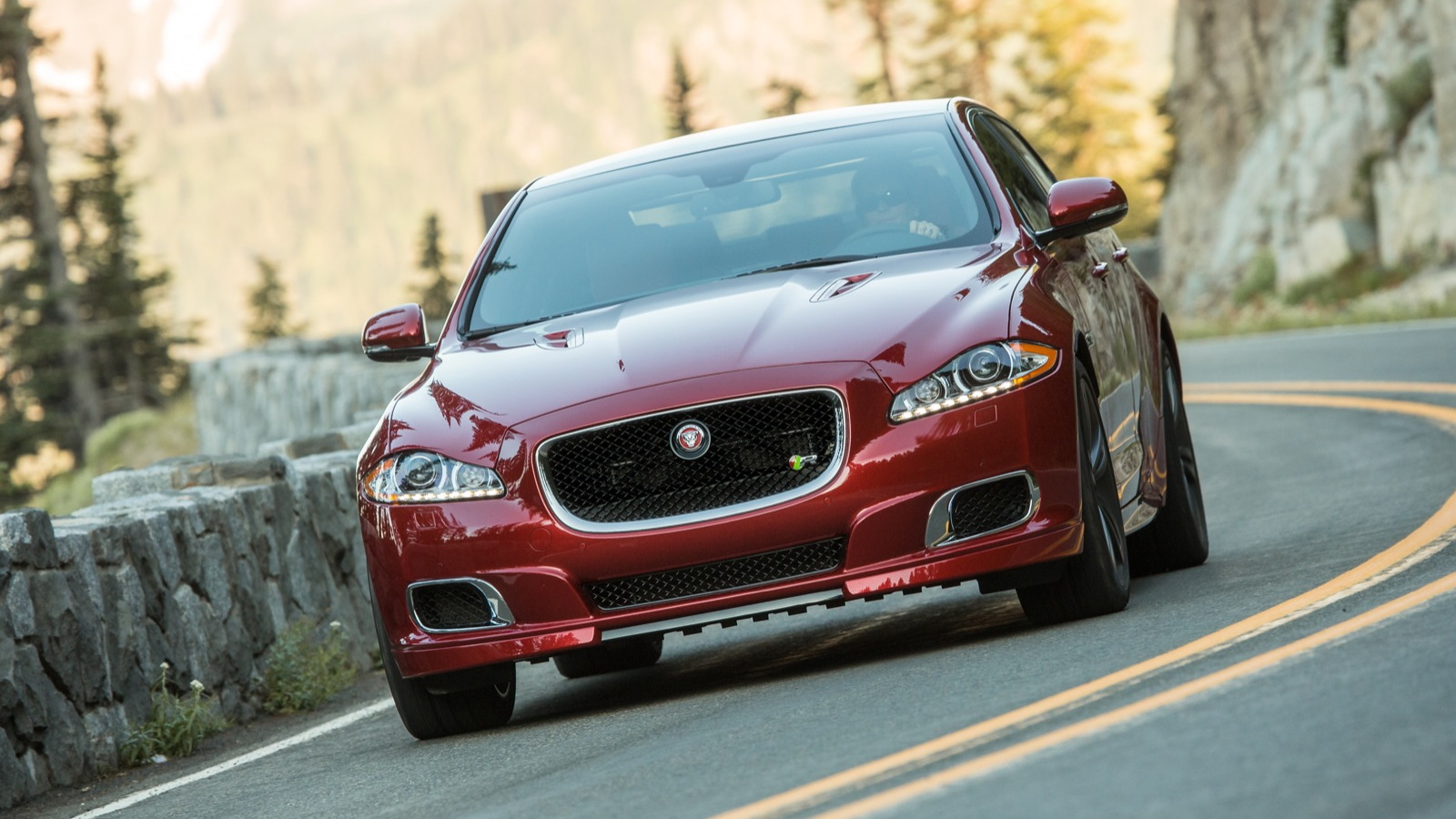 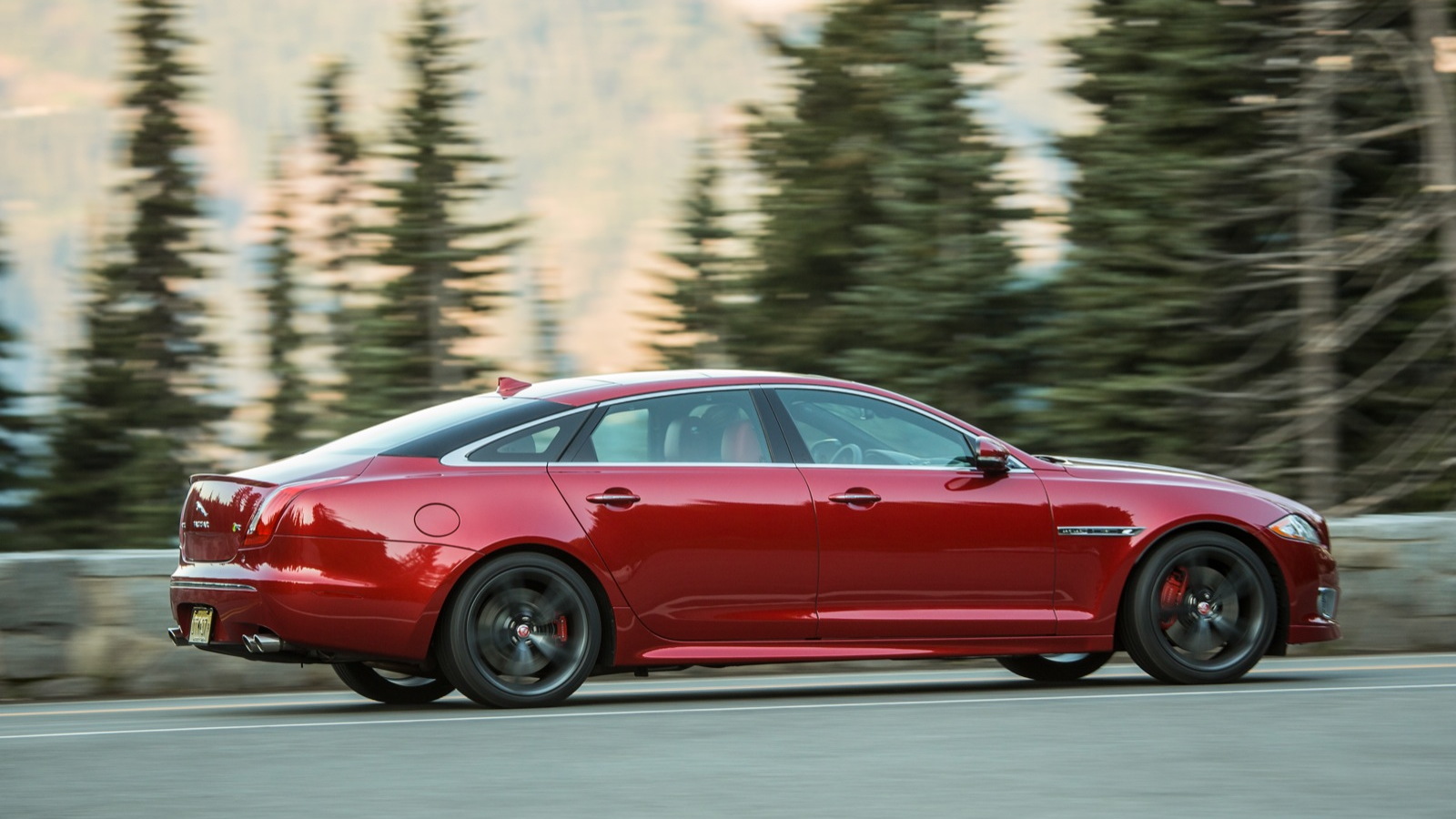 The new 550-horsepower Jaguar XJR is indeed a stormer of a big sedan. We knew that much, even before heading out for our first drive in one this past week.

But what we learned after a few hours behind the wheel is that this super-sedan (in size and performance) retains all of what comprises the Jaguar personality: It’s quintessentially English: composed and proper by day, freely switching gears to blow off steam for the evening or the bank holiday—and despite the first impressions, not so serious that it gets in the way of enjoyment. Yes, we Americans have a lot to learn.

So do some of the technology-overloaded German luxury flagships and their lock-step stoicism, really (why be so restrained even when letting it all loose?). And suitably so, the 2014 Jaguar XJR, which goes on sale this September, pulls off this duality better than any luxury car in recent memory.

To paraphrase a Jaguar representative, the XJR is there for customers who aren’t necessarily rabid enthusiasts or weekend racers—rather those who decide they really like the XJ and say “I want the fastest, most powerful version of that!”

And considering that, the XJR fits the purpose perfectly—delivering way more performance than you’d expect from such a large sedan without ever losing sight of its mission, of being the top-power model of a luxury flagship.

It’s been four years since there’s been a top XJR model—since the old body style—and the XJR gets an impressive mill right out of the 2014 Jaguar XFR-S we also recently drove. That’s Jaguar’s top-power 5.0-liter supercharged V-8 engine, making 550 horsepower and 502 pound-feet of torque—up appreciably from the 510-hp XJ Supersport and 470-hp XJ Supercharged. To complement that, springs are stiffer front and rear. Although you might not even expect it; the XJR has great ride quality, with a suspension that soaks up road coarseness and minor heaves with relative ease.

Jaguar has boosted engine output in a way that makes the XJR feel more like a performance car at speed—through intake improvements, primarily, by raising power above 3,000 rpm all the way up near redline, and by rounding the torque curve, so that revving the engine into its upper ranges is rewarded in a way that it isn’t in the lesser XJ Supercharged models.

The automaker calls it the “ultimate luxury performance car,” and they’re not far off once you understand the range of its capabilities: 0-60 in 4.6 seconds, a top speed of 174 mph, and 50-75 mph in under 2.5 seconds.

How is this all possible, you ask? With the aluminum-intensive structure of the current XJ, it boasts a curb weight of less than 4,200 pounds—hundreds of pounds less than a BMW 7-Series, Audi S8, or Mercedes-Benz S-Class.

Lighter and louder than German rivals

You notice the big V-8 briefly as it snarls on startup, but after that it settles to the background unless you’re taking advantage of its reserves. Just as in the high-performance Jaguar XFR-S, the engine gets a strident, wailing urgency when ripping into its upper ranges that sounds V-10-like; yet inside the cabin it's purely a burbling, bassy V-8 soundtrack—minus the sputters, pops, and ragged edge of the XFR-S, we might add.

The eight-speed automatic transmission is quite responsive and has a wide range of ratios, including a couple of deep overdrive ratios at the top. It doesn’t get the new Quickshift logic that is featured in both the new F-Type and XFR-S, though—so while you still might get some rev-matching during downshifts in the Dynamic mode, it's not quite as aggressive and proactive overall.

As we’ve mentioned in our reviews of the standard XJ, the steering is on the light side, but it loads up nicely off-center and as soon as you head into tighter twisties—which combined with excellent high-speed tracking makes it forgivable.

A few minor niggles might be less forgivable—like how compromised headroom might be, even when there’s plenty of legroom in long-wheelbase ‘L’ variants. And the infotainment and navigation system? A little behind-the-times.

Tech-limited, but luxurious to no end

At the same time, this is a car that you’ll likely savor inside, where the cabin is trimmed in supple semi-aniline leather, contrast stitching, and wood veneer that’s truly worthy of a luxury car with a six-digit price tag. On the outside, changes are minimal, with some special hood louvers, a front splitter, and a subtle rear spoiler, plus distinctive 20-inch forged alloy wheels. But it preserves all that’s great about the XJ’s contemporary-classic design without being too over-the-top.

At $116,000, some might deem the price as a little excessive—especially those who are too focused on what the XJR doesn’t have. Yes, although it does offer some active safety systems, like a blind-spot alert and active cruise control, things like night vision, head-up displays, and lane-keeping assist are missing from the menu.

That will be beside the point for the target customer, who simply wants a little more class, a little more pizzazz, than those uber-serious German sedans are willing to cut loose. Unless you’re willing to pay a lot more for the likes of the Bentley Flying Spur, Maserati Quattroporte, or Porsche Panamera, there’s nothing else with such attitude.