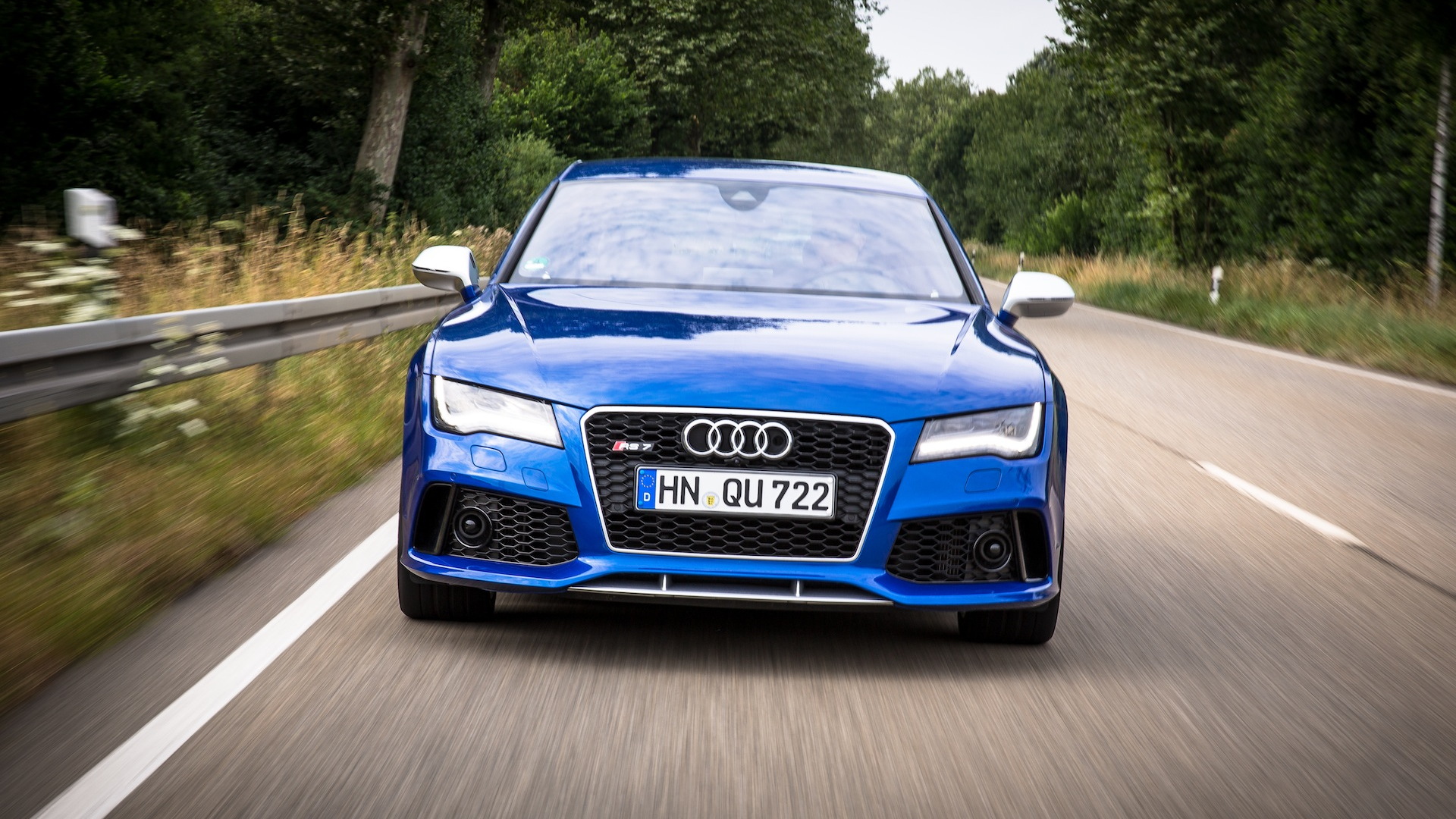 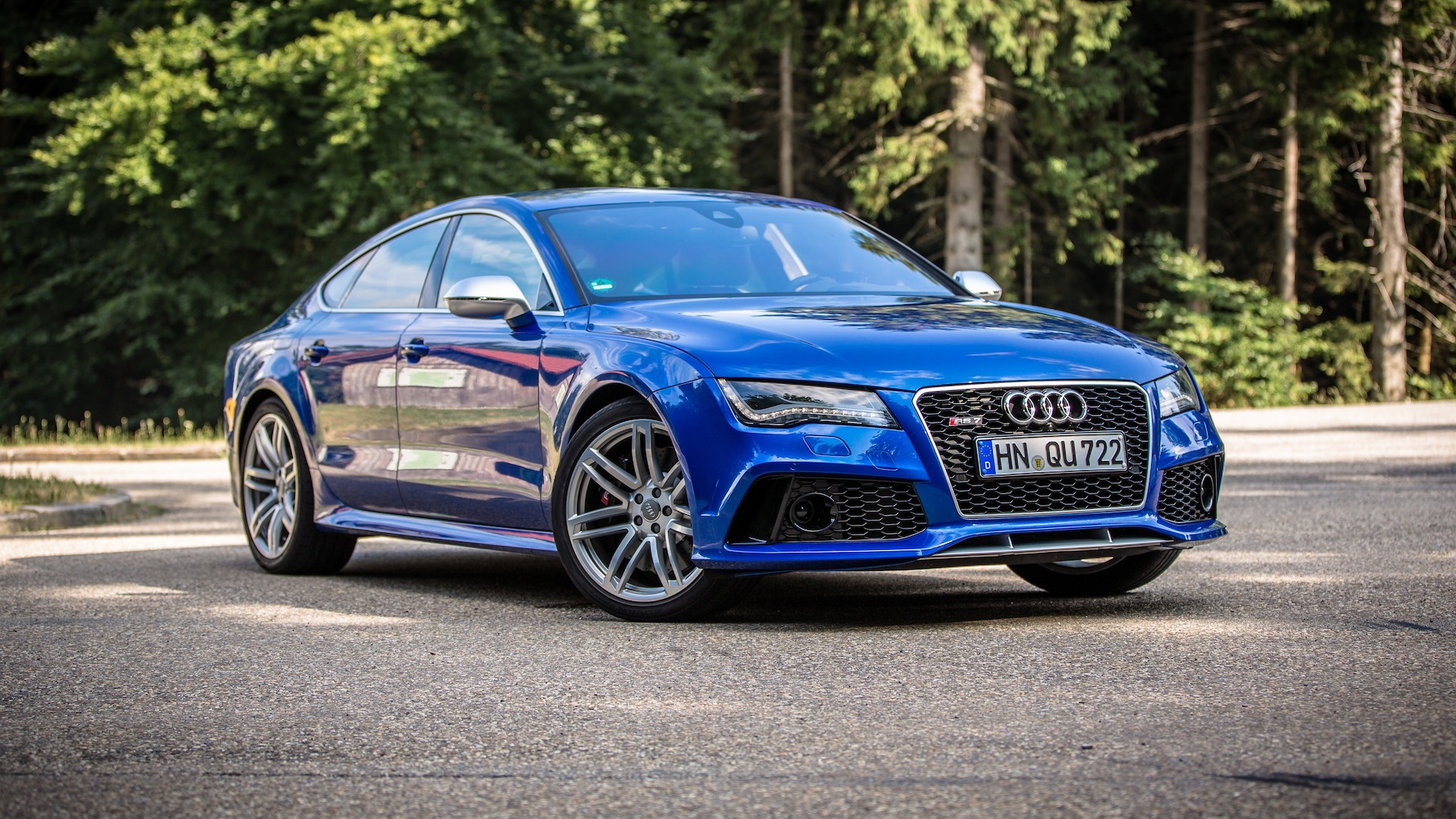 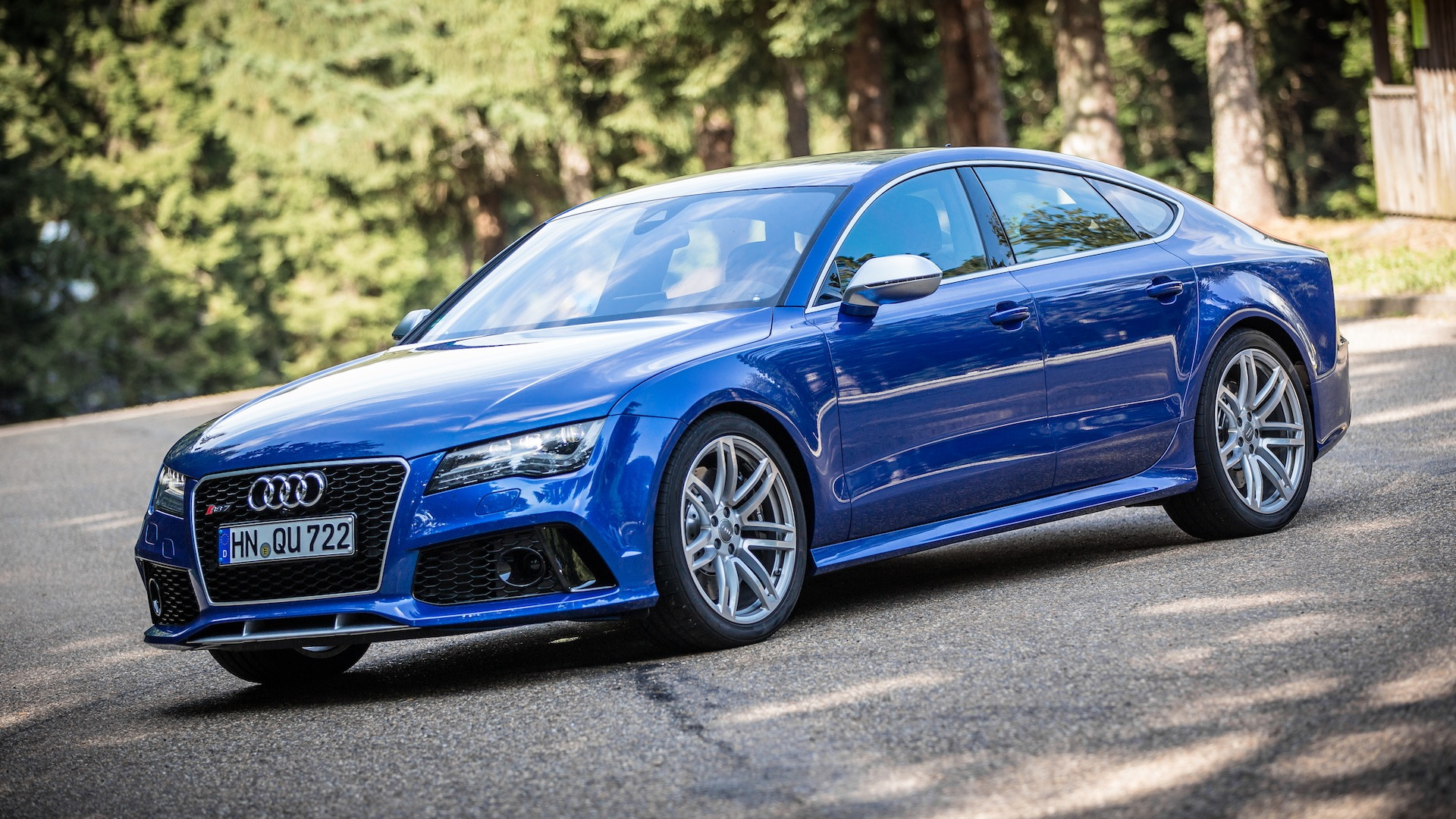 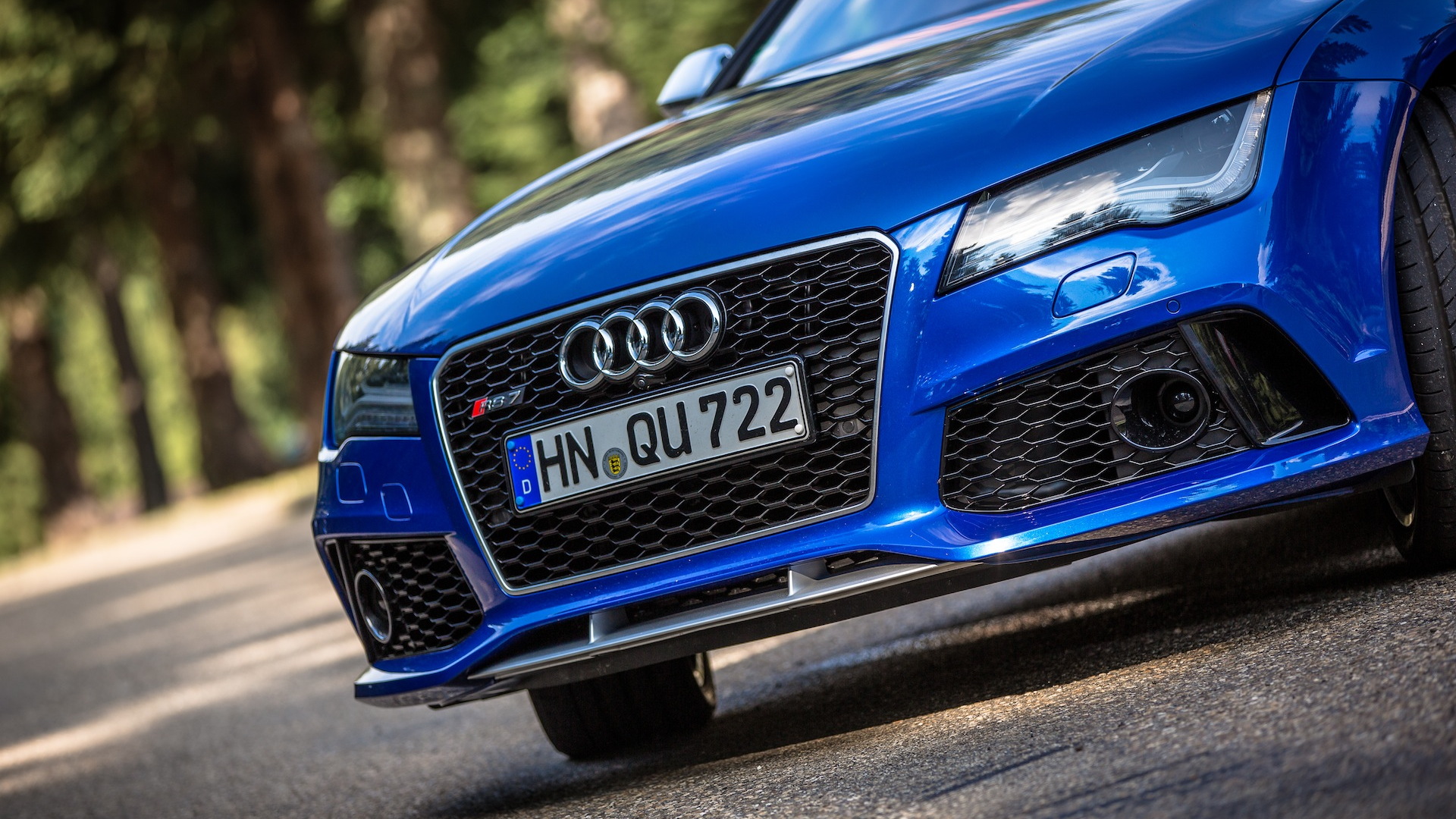 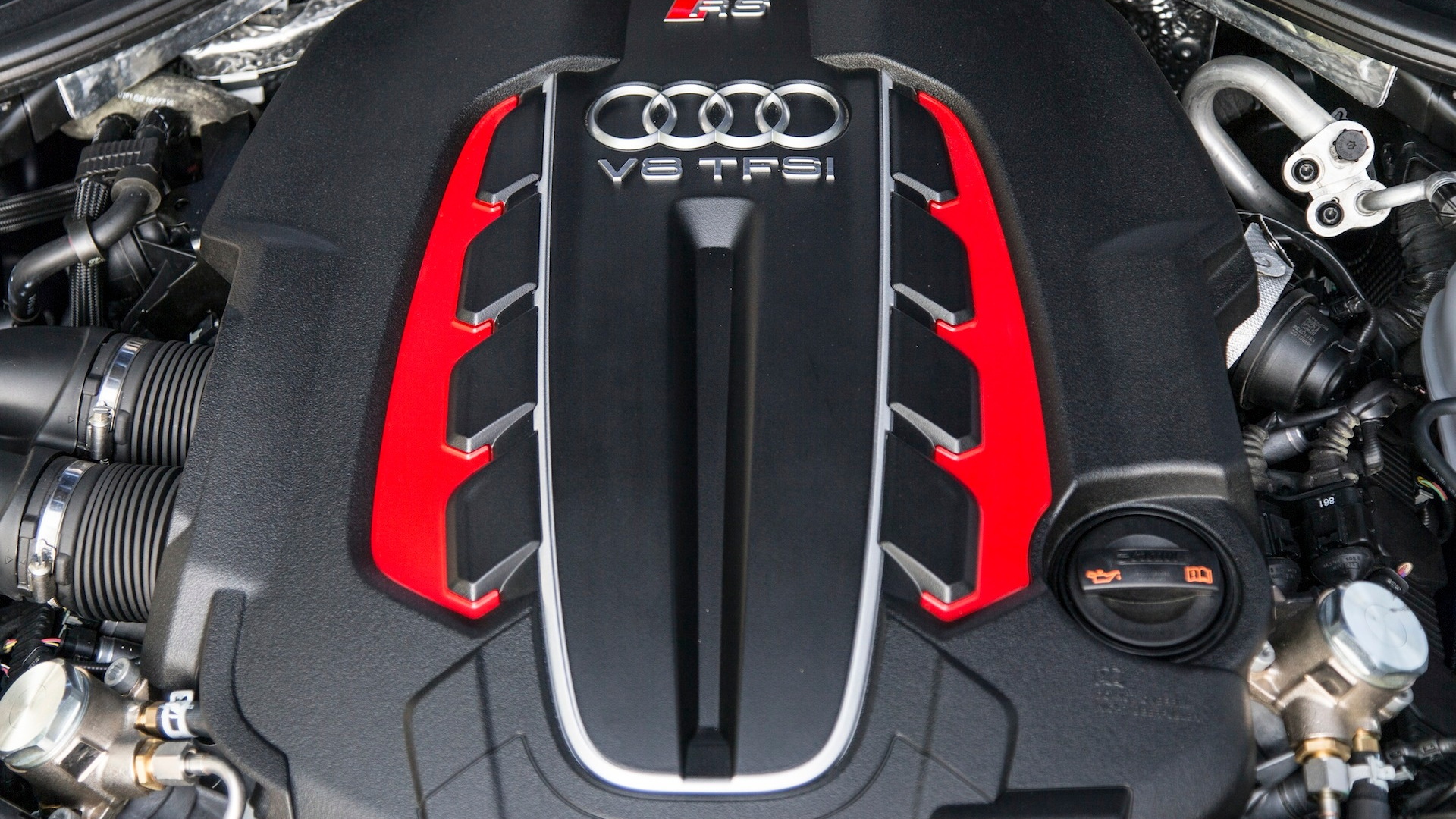 33
photos
I'm no Breeder, but Kim Deal and I have at least one thing in common. I've been looking for one divine hammer.

What you see here, is what a series of Dutch tourists in lightweight RVs saw through a real-world Adobe echo effect. It's the RS 7, the most outrageous roadgoing Audi of the now, even counting the R8 Spyder with the V-10 implant.

I know this, because I just got out of the R8 a few weeks ago in Malibu. California, meh. Fine. Germany is where you can really grasp a car like the A7 as it undergoes a transubstantiation into something as seriously mighty as an RS 7. Compared to all its neighbors--heathens--Germany's autobahns still have stretches without speed limits, still have clean rest stops where you can pull over and stop shaking and stop high-fiving yourself and buckle in for what's to come.

And though the autobahns get all the press, Swabia's B-roads are flat-out brilliant. The Black Forest just chews up cars with only straight-line common sense, chumping them with perfectly groomed Mobius strips cut barely free of the treeline. Drive them hard, solo, for a day and it dawns on you--they make cuckoo clocks here for therapy.

You can emerge, sanity in check, with just a handful of driving machines. The RS 7 qualifies instantly. I knew it after just a few kilometers, once I pressed my Estoril Blue car to life at Audi's Forum in Neckarsulm, cued up MMI's pre-programmed tour, and set a course for Freiburg and beyond--Bluetooth audio streaming, driver seat ventilating, lumbar supporting, pace escalating. Rapidly.

The Audi A7 is breathtakingly pretty, but to complete the oxygen-extraction process, there's nothing quite so effective as the RS 7.

The $105,795 RS 7 supersedes the 310-horsepower six, the new 240-hp turbodiesel, even the 420-hp S7, not to mention every other Audi you can spec out. The RS 7 presses hard on its eight cylinders and twin turbochargers to generate a gulpworthy 560 horsepower (probably 553-ish when it's SAE-rated in the U.S.) from that biturbo 4.0-liter V-8. It's effective and smooth and even genteel when it wants to be--just don't provoke it unless you really mean to.

Once you do, it's an astounding thrill ride at almost any engine speed, into a supercar stratosphere. The RS 7 thrives in the same extremely thin air as the CLS AMG 63 and M6 Gran Coupe: with 0-60 mph times of 3.7 seconds, it's no longer just a rival for the usual luxury sedans, it'll hound a Corvette Stingray down the straights while evading gas-guzzler taxes through the miracle of cylinder-deactivation technology. The top speed's set at 174 mph, but a Dynamic pack reaches for a 190-mph top end.

Instead of Audi's usual S tronic dual-clutch gearbox--not strong enough for all the RS 7's 516 pound-feet of torque--there's a ZF eight-speed, paddle-shifted automatic with a sport rear differential and quattro all-wheel drive. Set up for a nominal 40:60 torque split, it's variable to 70 percent of torque to the front or 85 percent to the rear. There's also launch control--which makes it the only vehicle other than the Jeep Grand Cherokee SRT to have a torque-converter automatic, an active rear differential, and launch control. In case you asked.

It's the perfect gearbox for the job, unrushed and invisible except when it's not. When you tromp on the RS 7's throttle, the transmission rifles through three or four gears, locks in and drops the RS 7 into some J.J. Abrams-inspired warp mode that teleports you from one spot to a few hundred yards down the 'bahn. The passing power on tap can be disturbingly strong--if you're a dumbass Peugeot hatchback without the common sense or dignity to stay out of the left lane.

Power isn't the only active force at work in the RS 7. The suspension and steering have the usual Drive Select controls, and on all first-batch cars, Audi's adaptive air suspension. (A Dynamic Ride Control setup with adaptive hydraulics is coming next year, but is expected to be low-volume.) The RS 7 has the stiffest calibration and the stickiest summer tires of the A7 lineup, but it's not as shatteringly stiff or ultimately flat as it might be. The comfort mode lets it all hang out, with just some more tire thump and noise giving away what lies deeper in Drive Select. Auto begins to damp things down and speed up shifts and throttle.

Where you want to be is Dynamic, or better yet, Individual. In Dynamic mode, the steering picks up weight and the variable-ratio steering goes into a direct-ratio mode, while the air suspension clamps down. The RS 7's chief engineer and quattro general manager, Stephan Reil, points out that his car still lets drivers choose all their settings--unlike the other coupe-like spin-offs, they apparently know who they are.

So why not do it like Reil does it? For the next drill-punch routine through Swabia to the beer-soaked glory of Bavaria, I dial the RS 7 to Individual--and leave everything in Dynamic except for suspension, which goes into Auto. Because that's how Reil does it.

No shock, Reil's setup works. Those not-so-flying Dutchmen are getting pasted as I whiz by, needling between them, scuffing a top coat off the RS 7's tires, grabbing for whatever grip we can find. They back down and drift free a half-lane for passing, a whoosh of air whipping around them, a firecracker snarl of backfire exploding in front of them while I steer the RS 7 into the next 15-degree corner. And the next one. And the next one.

It'll hang all day, running up to redline, sitting right against its rev limiter when it's in manual mode, waiting for you to get over the juvenile crap. Which it's also secretly into.

The mechanical skunkworks--quattro, ZF, sport differential, and that crushworthy biturbo eight--works deftly in the soggy little pop-up downpours that blast the roads clear of cyclists. And of usable traction. And of sweeping video-ready vistas, some things just can't be edited out in post.

It can kill Kodak moments, but the rain can't kill the utter confidence the RS 7 has. Or what it has in store for your earholes: the backfire of the gods. Jimmy Page himself would put down the axe to listen to the RS 7 hammer through a tunnel and drop out of the throttle.

Where you can sense its mortality is on the very tightest, narrowest curves. It's a very good thing the RS 7's huge brakes (15.4-inch discs in front, 14 inches at the rear) can handle repeated stand-upons. Because stone wall, but more important, because understeer. The rear-biased all-wheel-drive system can't erase the RS 7's weight or all its built-in tendency to push, but it neutralizes so much of both, the RS 7 dives into corners pretty predictably, at incredibly lofty speeds, with a little tuck and roll. You'll be able to spend up to carbon-ceramic discs and the DRC setup next year if you want; for now, take the red-painted calipers for added lightness and get a grip on the 9/10ths at hand.

The 500-mile drive--by myself--gave me hours to stare down the RS 7's exquisitely rendered cockpit. It's beautiful. The pinstripes of aluminum wedged into black-stained wood are some of the most urbane pieces you've ever seen in a car; they're accented by dots of red on the shift lever, aluminum trim on the wheel and pedals, and red needles on the gauges.

From the outside, the RS 7 looks menacing enough, with a black honeycomb grille--yeah, yeah, yeah. Sign me up for the five-spoke 21-inch wheels and upcharge me a grand--just make sure to finish them in black. I'll take either the Nardo Gray flat paint or Estoril Blue shown here; the $6,000 Daytona Gray matte finish just looks as high maintenance as can be, and as we all know, only one star per household.

It's a very good thing that the RS 7 comes with Audi Connect, which ties the car to data stream and puts live information on tap. The car's navigation system was running on early code, so after long breaks, it dumped my location, and I lost the tour. I discovered soon enough that Google earth maps truly make it easier to identify what's around you--pretzel factory, a dairy farm, neighboring nation with strict speed limits. And somehow when I found myself in Austria, I knew how to get out before acquiring a memento in the form of a big speeding ticket. Because experience.


You too will get used to MMI's quirks over time, when you have to reload destinations as such. MMI can't get to remote hotel names easily, but as a driver, you can write in letters on the MMI touchpad. That means you can also tap it inadvertently with a hand resting on a leg, and as a result, flip your Bluetooth audio stream over to German pop radio.

If I read excited, it's because it's still tough to come down from the Autobahn civility of pounding out 150-mph runs whenever the instruments dropped their speed-limit warnings. I never got tired of the RS 7, not for a second in more than 500 miles of solo driving at thermonuclear speeds we can only thrill about in America.

At the end of all that time, I only ever really got tired of the music I was streaming. Pharrell Williams? You are the summer of 2013. At least on this car's hard drive. You've won.

Panamera? CLS63? M6 Gran Coupe? You now have company. I can imagine a four-door GT-R might feel like this, if it let its richer instincts take the wheel. The RS 7 has thrown down one of the most tastefully tailored gauntlets of all time.