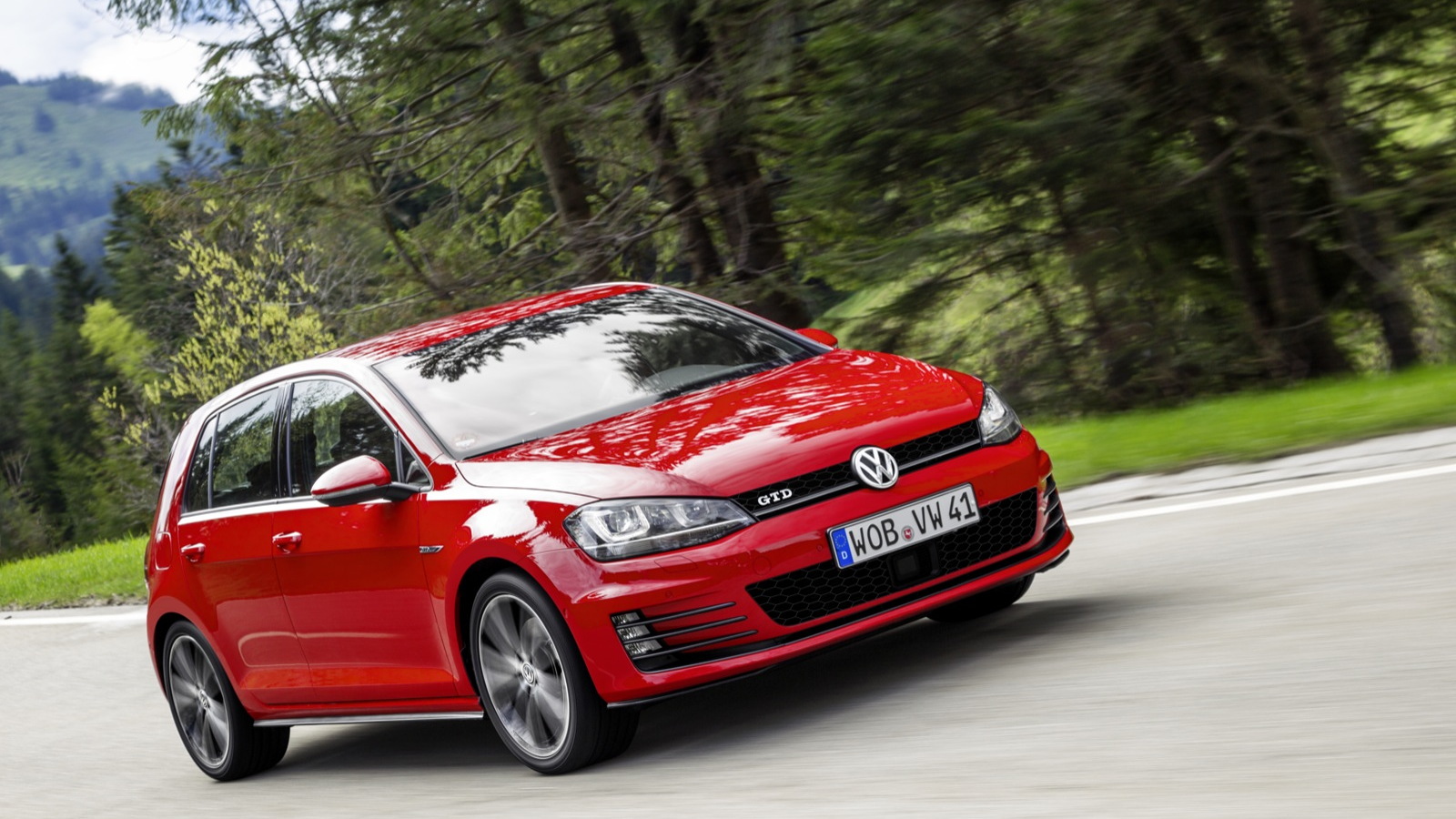 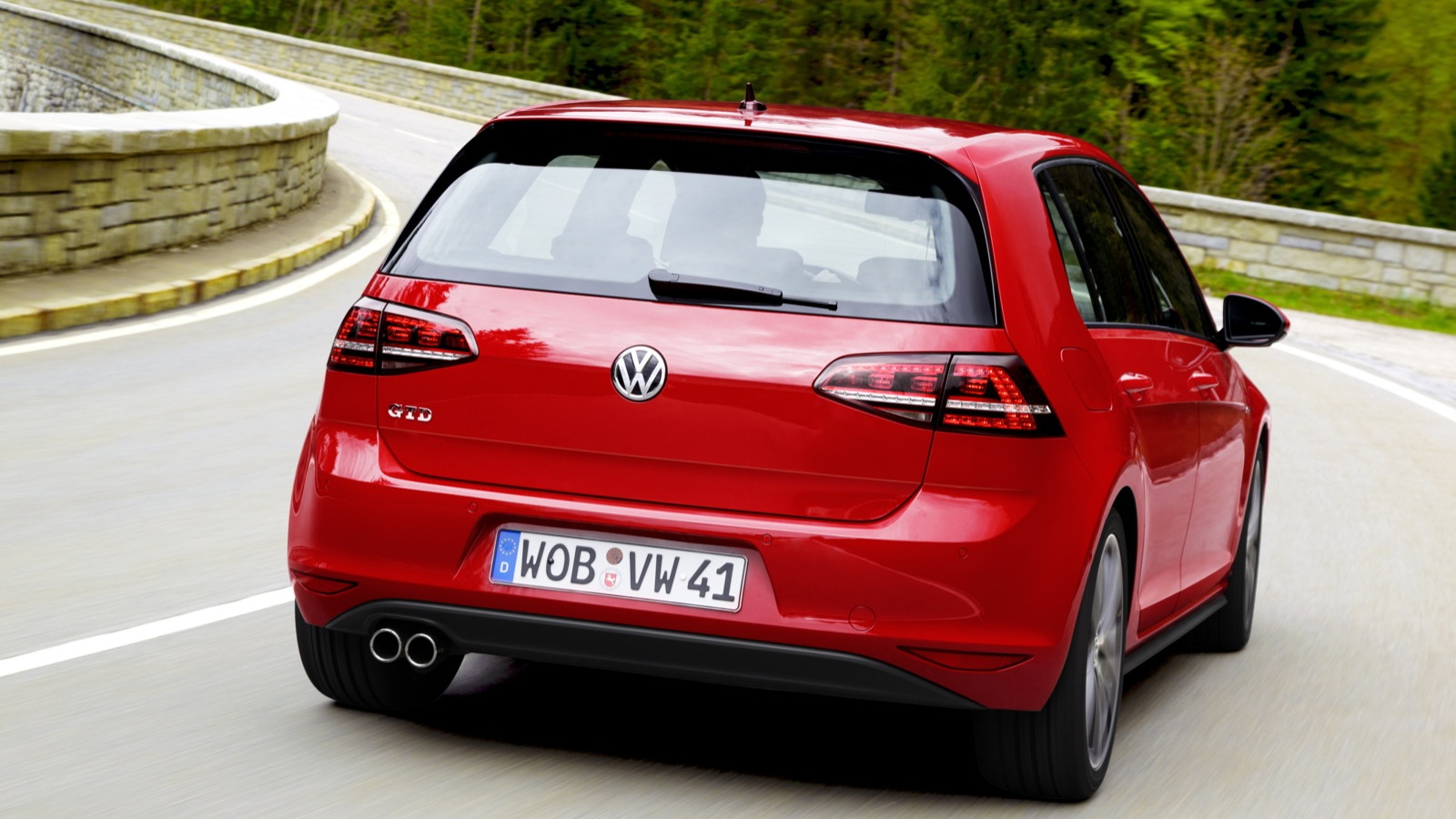 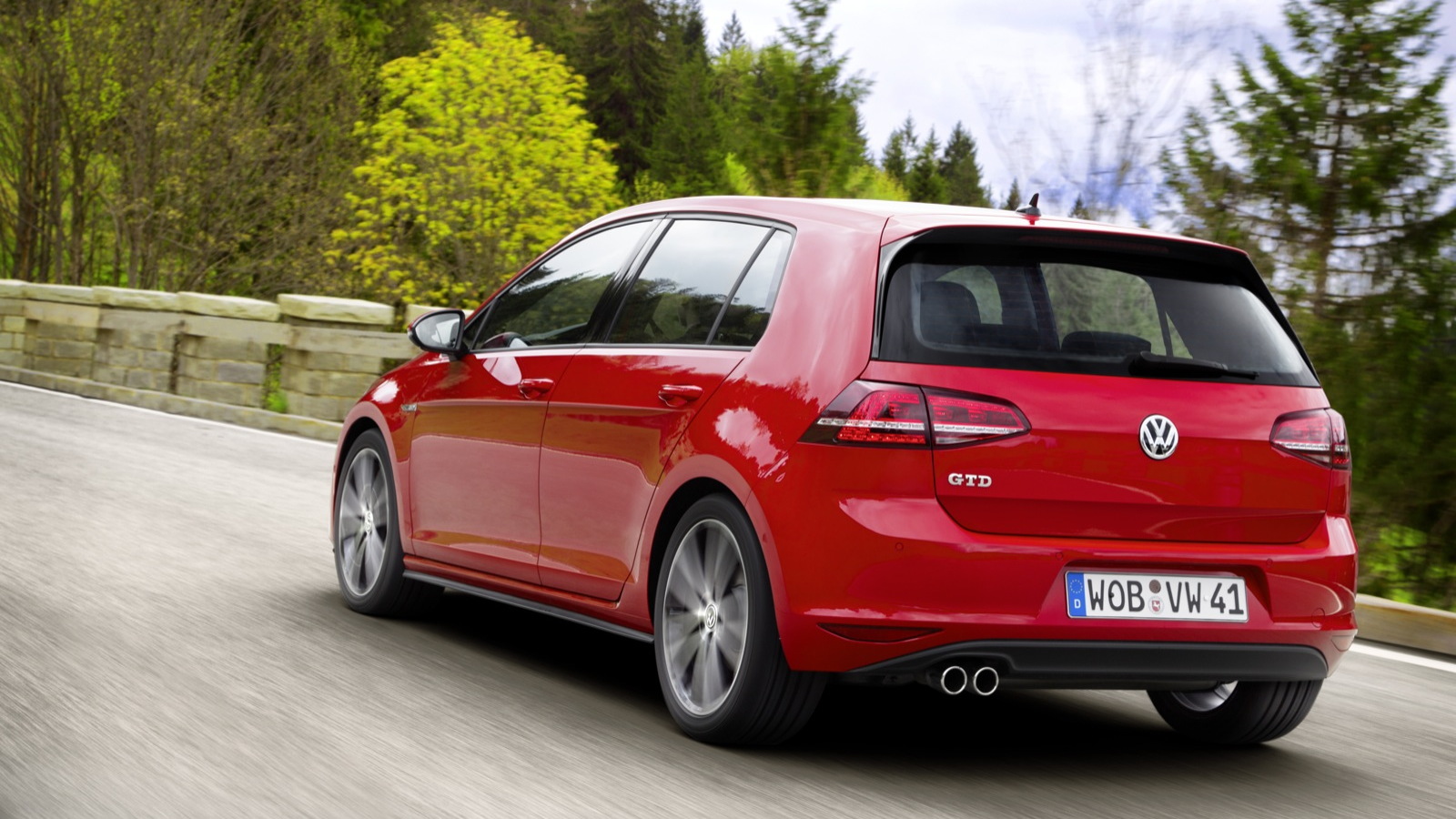 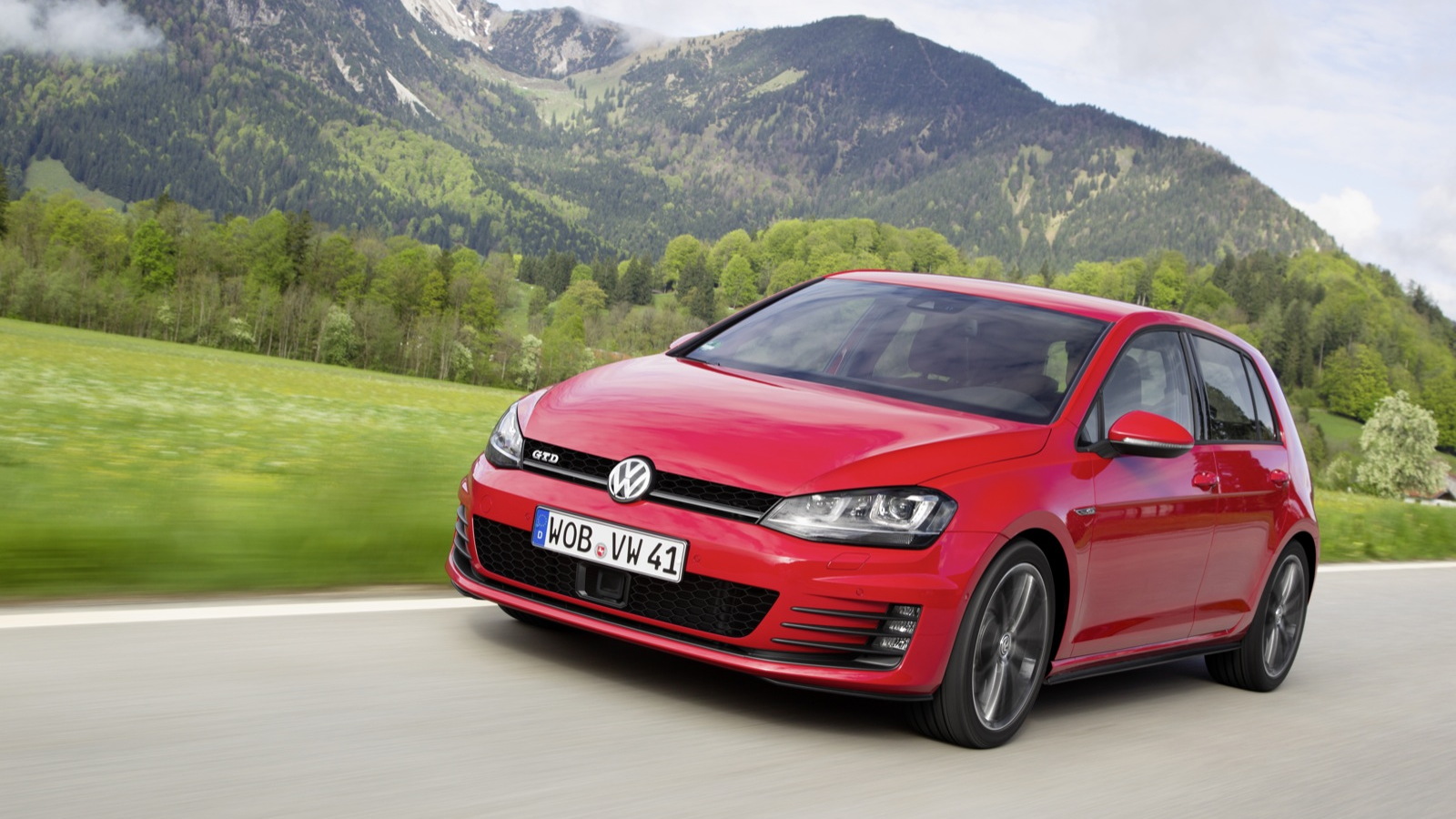 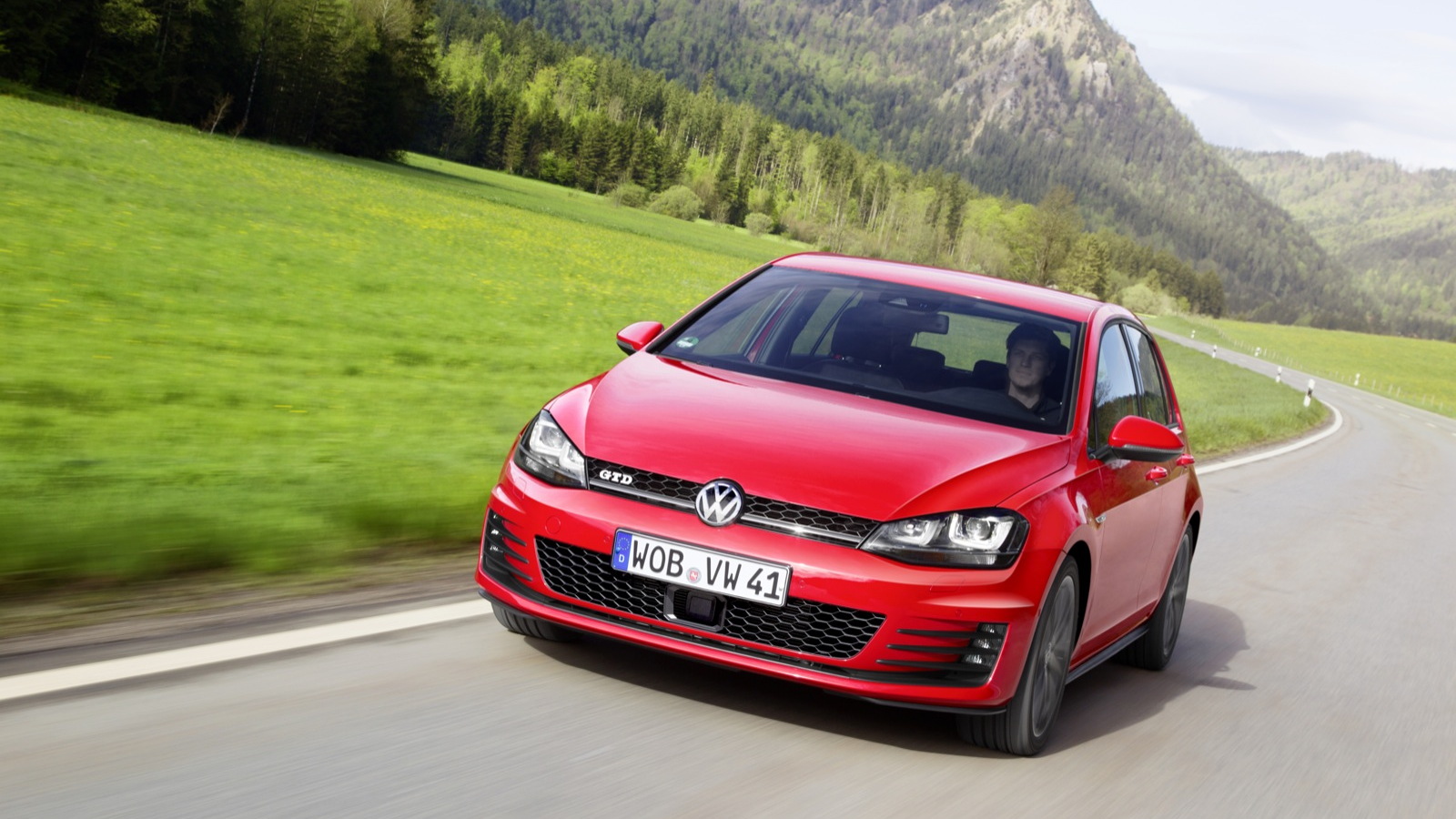 43
photos
It’s the fastest, most powerful GTD ever—capable of getting to 60 mph in less than seven seconds, and hitting a top speed of 143 mph, yet returning more than 40 mpg on the highway.

What even is the GTD, you ask?

We don’t expect many Americans—not even many driving-enthusiast types—to be in the know. But as we recently found out on an extended 250-mile drive this past week in Germany, GTD is a model name you should take note of if you want a ‘green,’ fuel-efficient car that’s also satisfying from a performance standpoint.

And if it comes to the U.S. in 2014—as it likely will for the 2015 model year (it’s at least a year away)—the GTD is more than just a performance car you fuel up with the green pump handle. Distilled down to the simplest, it’s “the GTI of diesels,” and this is no new idea; it’s been sold in Europe since 1982. You get, essentially, the same all-around performance package as the GTI, only with the latest EA288 Volkswagen TDI clean-diesel engine—in this case, modified in various ways to produce 184 horsepower and 280 pound-feet of torque.

One of the most athletic small diesels yet

How does the GTD drive? Mostly, like a GTI, and more athletically than any other diesel compact car we’ve been in—except, maybe, the limited-production (and much pricier) BMW 335d from a few years ago. The GTD, like the GTI, takes advantage of all the weight savings in the new ‘A7’ version of the Golf (based on VW’s ‘MQB’ global architecture). And with its curb weight of just over 3,000 pounds plus the engine’s robust response even when revs are low, VW says the GTD can accelerate from 50 to 75 mph in fifth gear in just 7.5 seconds. From a standing start it doesn’t quite leap forward with the hair-trigger verve of the GTI, however.

Compared to previous four-cylinder TDI efforts, the completely new engine is stronger, cleaner, more flexible, and even more efficient—thanks to variable valve timing, new engine controls, an intercooler integrated into the exhaust manufold, and a new dual-loop exhaust-gas recirculation (EGR) system. Additionally, the high-pressure common-rail direct-injection system has been cranked up to 29,000 psi, from 26,000.

Clean-air concerned take note: The GTD is a 50-state car in its new form. With its NOx storage system and urea injection (as it would be offered in the U.S.), it complies with Euro-6 emissions standards and wouldn't require other additional systems to be sold in California.

Just like the GTI, the GTD includes an excellent variable-ratio (‘progressive’) steering rack, a two-stage electronic stability control system with ESC Sport mode, the XDS+ electronic differential lock (helping to send extra torque to the wheel with the most traction), and Dynamic chassis Control (DCC). Altogether the setup feels as comfortable with tight esses as it does blasting along at more than 100 mph.

In Europe it’s offered with either either a six-speed manual gearbox or six-speed DSG automated manual gearbox, as well as in three- or five-door form, as well as with loads of options. While GTD options for the U.S. might be more limited, we hope VW offers both transmissions. While we emerged from our GTI drive soundly convinced that the DSG was the way to go—because it keeps the engine right on its torque curve, almost magically blipping through the gears—it’s a little less deft with the diesel.

The 2014 Euro-spec GTD feels just as quick, if not quite as quick on its feet, as the Euro-spec GTI we drove a few months ago (yes, still no U.S.-spec cars of either). Stomp your right foot into it, and there can be just a moment of hesitation that’s not unlike the high-performance turbo gasoline models of a decade or so ago; then the surge of power and torque and the characteristic gravelly-toned baritone of the diesel engine definitely does put you in the right mindset. The caveat is that the lower gears seem to go by quickly and have a very limited range.

On the outside, about the only change versus the GTI is that there’s no orange/red stripe around the front end. Bi-xenon headlamps and LED daytime running lamps help accent the neat and conservative yet racy look. Inside, the Tartan-pattern seats seats are a GTD (and GTI) tradition, and the smoother, more premium-trimmed dash with an available eight-inch touch-screen infotainment system that even includes proximity sensing.

Features offered—at least for the European market—include Adaptive Cruise Control plus Front Assist with Emergency Braking, a lane-keeping assistant, Light Assist, and Dynamic Light Assist. Driver Alert also looks for driving behavior indicative of drowsiness or poor concentration and warns the driver to take a break. Other options in Europe include full leather seating, a Panoramic sunroof, and a Park Assist system.

For some attitude adjustment, you can click a console button just ahead of your right knee, and you get five modes (Eco, Sport, Normal, and Comfort)—each affecting transmission behavior, throttle mapping, and even the engine’s electronically massaged sound. Sport and Comfort modes make corresponding changes to the damping and ride quality, while Eco mode runs the climate control in a leaner way and completely disengages the clutch when coasting, for DSG cars.

Although we’re not sure if DCC (the automatic damper system) would even be available in U.S. cars, the two extreme modes (Comfort and Sport) do offer some choice between a little more isolation on busier surfaces or crisper turn-in; in either case the suspension seemed to load up with the same degree of confidence. But we should note that the DSG automatic’s shifts become quite jerky if you’re in Sport and are momentarily driving with finesse.

Going easy on your fuel budget while allowing a lot of grunt at your command is of course the big lure for the GTD—versus the GTI or just about any other sporty car. And while its 56-mpg rating in the European cycle seems a little far-fetched, based on real-world results from our drive we can see the typical GTD driver—even one with a zealous edge—earning daily-driving averages well into the 30s. At a steady 80 km/h, with the A/C working hard on a hot day, the GTD returned about 50 mpg, according to the trip computer; that dropped to about 42 mpg at a steady 78 mph. And as we found out on a stretch of open Autobahn, maintaining a steady 200 kph (124 mph) returns 22 mpg—a figure we consider surprisingly good.

At this point, the GTD is in the U.S. product plan, but it’s definitely not confirmed. VW of America vacillates about its plans for the GTD in the U.S.—and based on a few discussions, it’s apparent that it’s not for the obvious reasons. With VW’s mad success selling diesels (with about half of U.S. Golfs already sold that way), nobody’s saying that Americans wouldn’t buy the GTD. Among concerns that surface after a little more discussion are questions like whether the GTD would cannibalize sales from other VW (or Audi) models, whether the GTD would confuse VW’s ‘green’ clean-diesel messaging, or whether a new kind of green-performance crowd that might make the jump.

One issue we do see for the U.S. is that Americans are going to weight the GTD against the GTI, and the current GTI is just so darn good. With gasoline direct injection pushing power and its peak torque accessible in the same low range as that of the diesel, the 2.0 TFSI in the GTI has more immediate response at lower revs than even this 2.0 TDI (yes, some years back we never thought we’d be saying this). It’s that added bit of lag you get with the TDI—even in its Sport mode—that makes it slightly less convincing in an enthusiast sense.

Versus WRX, Mazdaspeed3, even Focus ST: quite the efficiency payoff

The economics of going with a diesel work out much better for Europeans, of course. But VW would likely sell a GTD with a starting price in the vicinity of $26k or $27k—or only a couple thousand more than the GTI. At that price—and if you limit your comparisons to vehicles like the GTI, the Ford Focus ST, the Mazdaspeed3, and the Subaru WRX—the economics of the GTD could pay off quickly.

That said, the idea of a high-performance diesel model is tantalizing to us. And at the end of the day, we emerged loving the car exactly as much as we thought we might...only with a hint of the kind of reservations VW itself might have.

We think that just like the GTI pushed VW into the minds of a different kind of car buyer, the GTD could do the same. There’s a place in the market for a cheerleader for how much fun Volkswagen’s clean-diesel technology can be. And this is it.