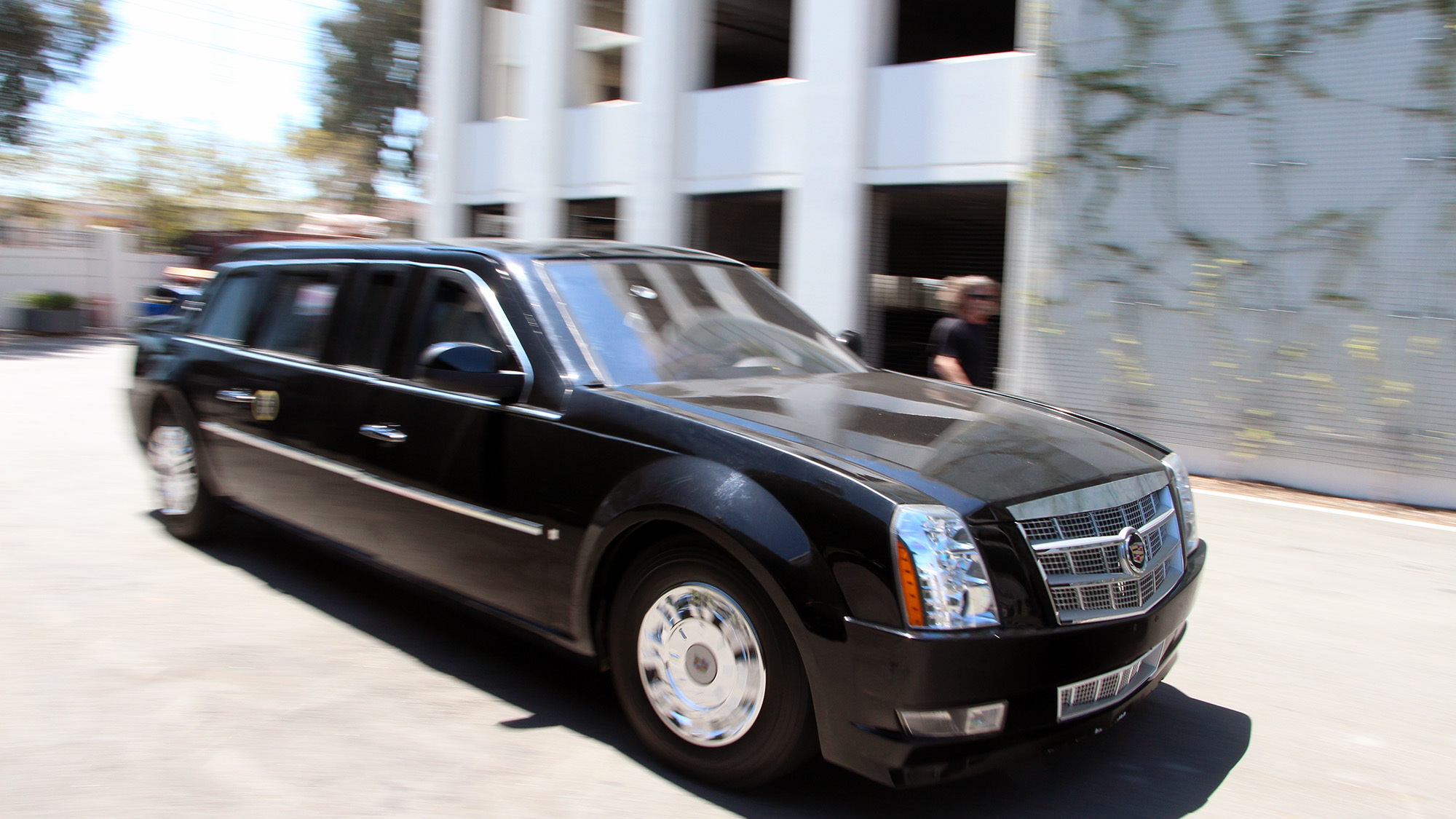 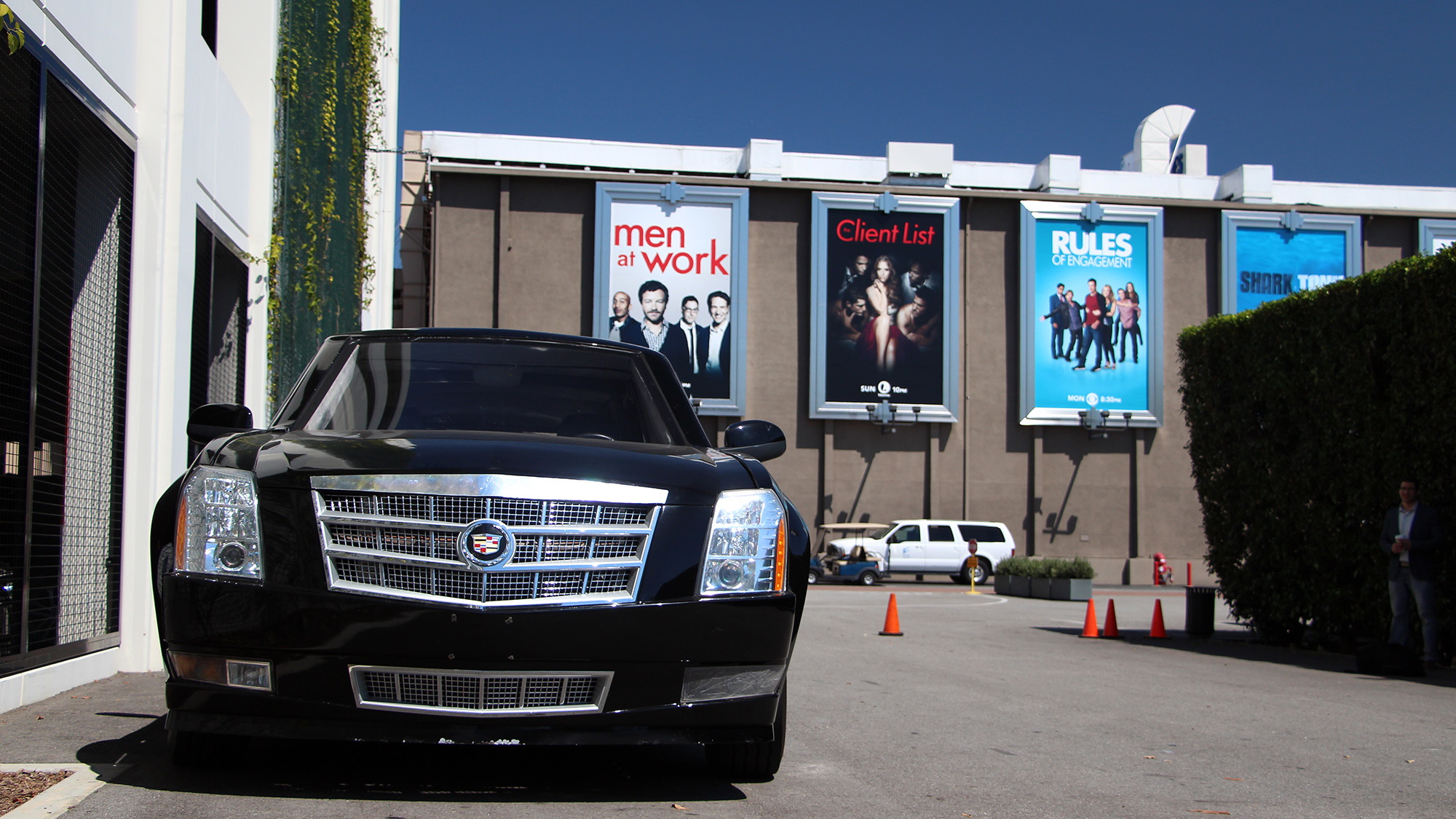 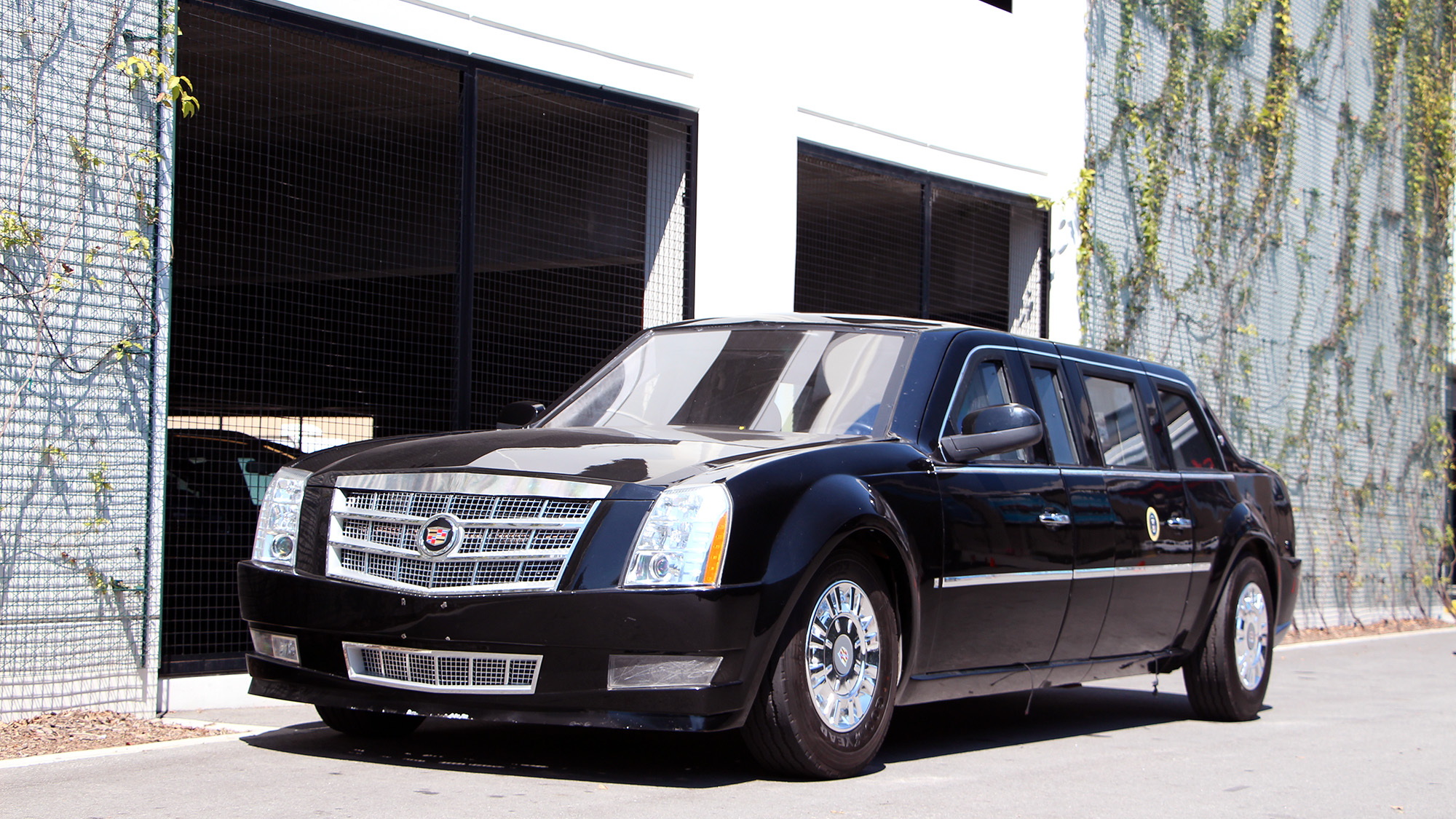 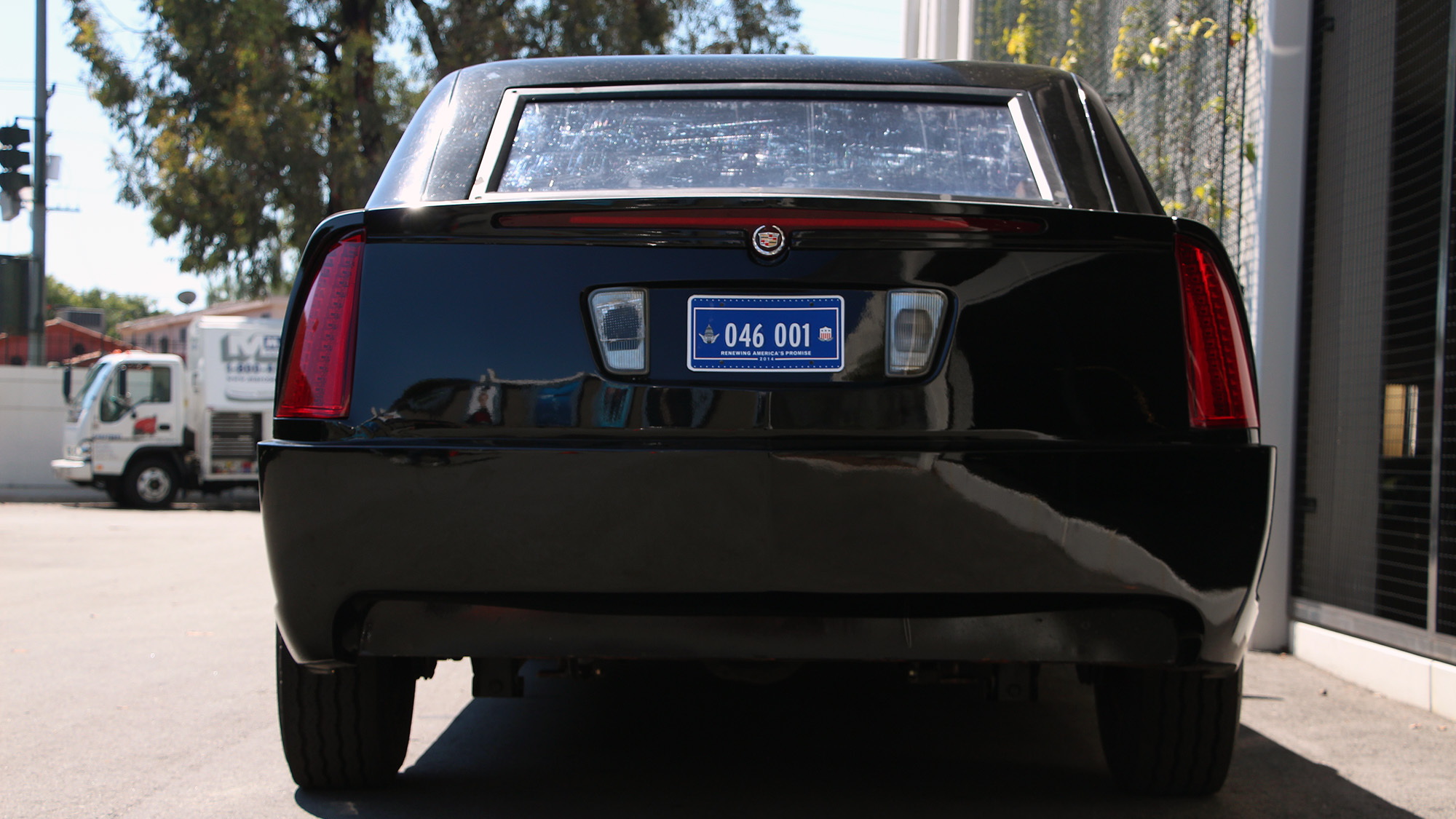 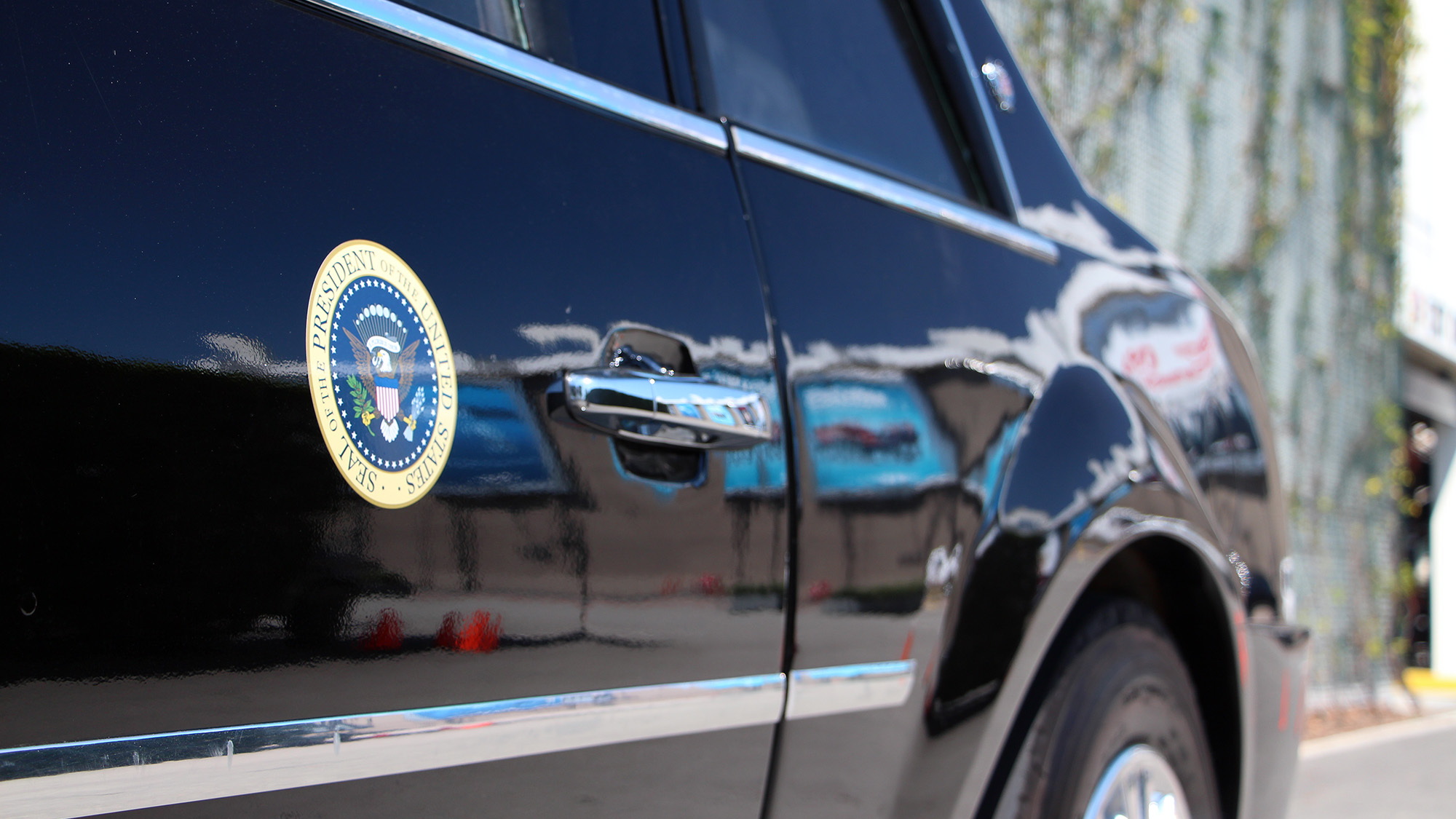 Those are the words of Cyril O'Neal, the man behind Ghostlight Industries, which is the company responsible for The Beast replica appearing in the new film White House Down. O'Neal and his team, along with vehicle coordinator Graham Kelly, had to devise a way to produce a vehicle that looks just like the real-deal Presidential shuttle. Actually scratch that, the team had to build four exact replicas.

Getting back to that opening line, it was O'Neal who reached out to a friend, and said friend put him in touch with a member of the Secret Service. O'Neal asked if they could get some details on the actual Beast. The answer, as you might expect, was a resounding "Hell no!" Ghostlight Industries had to find a work around.

We met with O'Neal and Kelly alongside one of the surviving cars from the movie to figure out how they did just that. Starting with a photo of Barack Obama's Cranked-up Cadillac, the fabrication crew devised that the headlights came from a 2007 Escalade. From there it was a matter of applying the dimensions of that headlight to the rest of the vehicle and extrapolating the rest of the body panels. These aren't small body panels either, as The Beast is quite an imposing specimen. Your author stands 6'3" tall, and he felt as if here were climbing into a barely lowered Suburban instead of a cushy limousine.

That Suburban comparison actually makes a bit of sense here too. The chassis is a heavily modified version of what you'd find under the skin of that large lumbering Chevrolet. O'Neal stressed that the only real remaining portions, however, are the two large outer channels. Everything else had to be custom made. From there the team plucked the ever-popular LS3 V-8 engine from the GM parts catalog and set it between the wide fenders of the car. This motor was picked because it's very easy to work on, has parts available everywhere, and makes plenty of predictable power. An airbag suspension system was then utilized to handle the substantial weight of the entire vehicle. It ticks off somewhere between eight and nine thousand pounds on the scale.

That amount of weight proved to be an issue the builders had to work around. They initially were given a list of stunts that grew to include taking the car on wet grass (imagine trying to keep that rear end in check) and getting it a bit airborne (imagine trying to... just keep the thing together). Still, Ghostlight were clearly up to the challenge because the film cars do just that. In White House Down, lead actor Channing Tatum plays a man helping the president escape and respond to a terrorist attack on the White House. Jamie Foxx plays the president, and the two wind up thrashing The Beast in a number of scenes.

We'd heard enough of this though, and it was time to make our own scenes with the car. Yes, we asked for the keys.

The Beast Presidential Limo from White House Down

Cyril and Graham happily obliged, and it was easy to see why they weren't worried. Our test route was restricted to a small portion of the Sony Lot in Southern California. Jumping into the front seat, the cavernous doors were shut and the engine was fired up. Unfortunately it was a rather hot day and the A/C didn't feel like working. Also, the windows don't roll down, since you can't have folks poking their heads into vehicles designed to transport the president... even if it's just a movie president.

Plopping the shift lever into drive, we inched the car forward before we head to undertake a three-point turn. This quickly escalated into a 5-point turn, but The Beast was now facing in the opposite direction. Goosing the throttle excited the LS3 and propelled us forward surprisingly briskly. That motor sounded great as you might expect, and we were more than surprised at how well it got the big rig rolling. That forward movement was quickly brought to a halt because we had to make another turn, back the car up a bit, then turn back and pull into the spot where we started. It was a rather short ride, but it's still seat time in a movie car, and we'd never turn that down.

Cyril O'Neal and his Ghostlight Industries team, along with the coordination of Graham Kelly, are capable of churning out impressive machines. Not only that, their cars work. That's what directors and producers need from a fabrication and engineering crew, and that's what O'Neal delivered here with The Beast. Yes, we wish we could've taken it out on the street and cruised around Hollywood, but the studio guards were on high alert. Perhaps we should've bribed them with the promise of In-N-Out upon our return.

Next time someone hands us the keys to a movie car, just know we're not stopping for the guards. Even if one of them happens to be Channing Tatum.