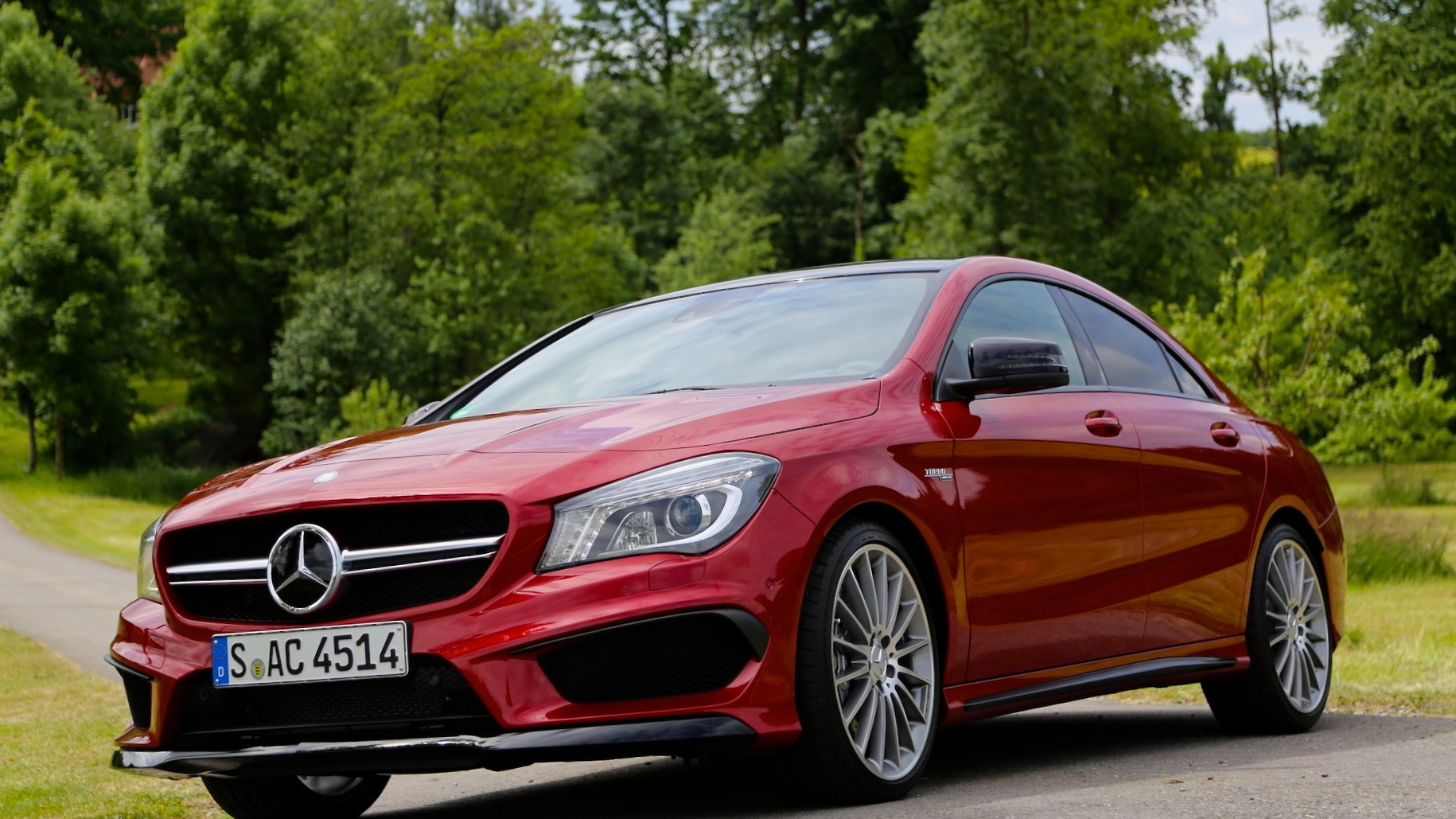 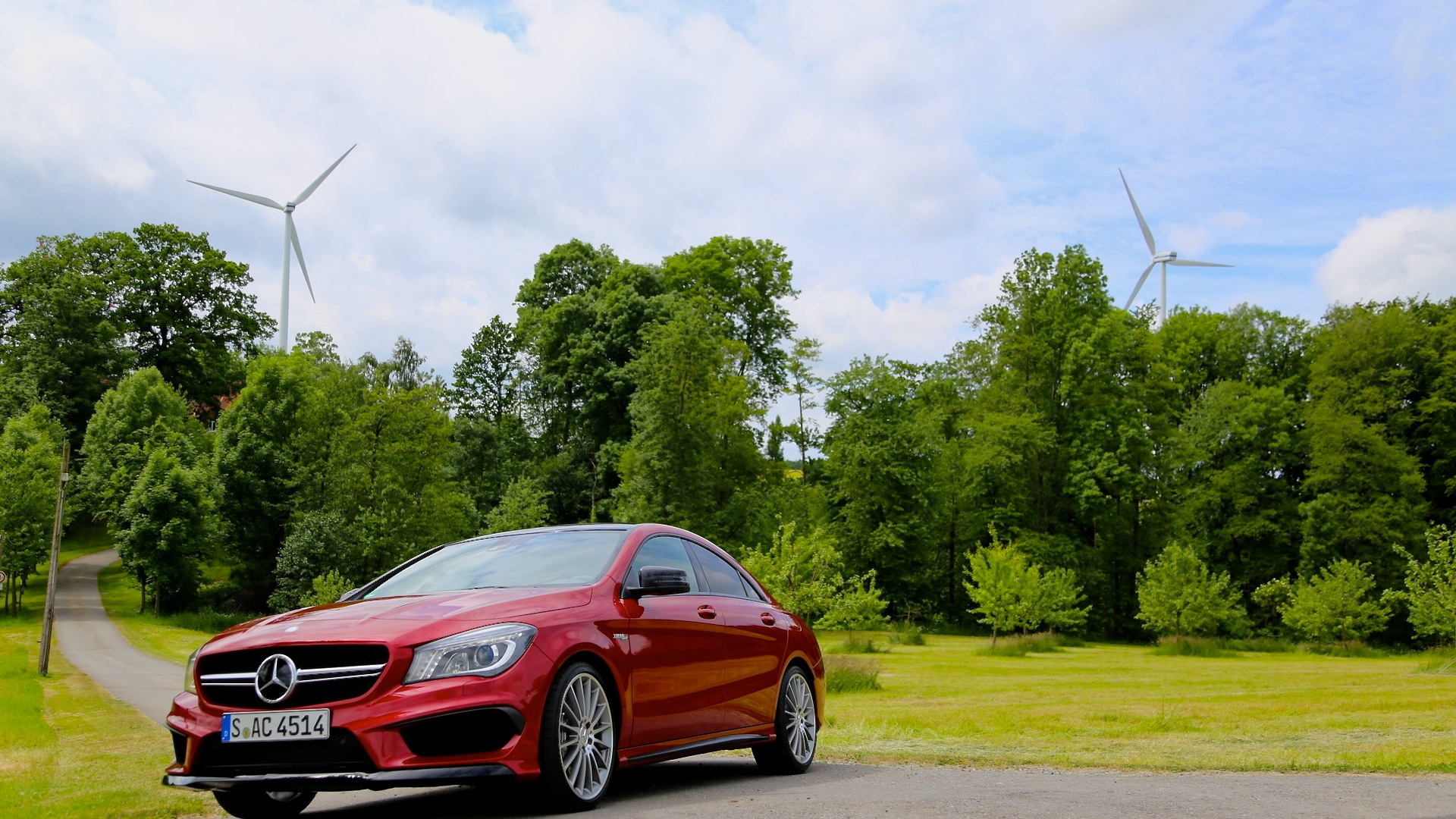 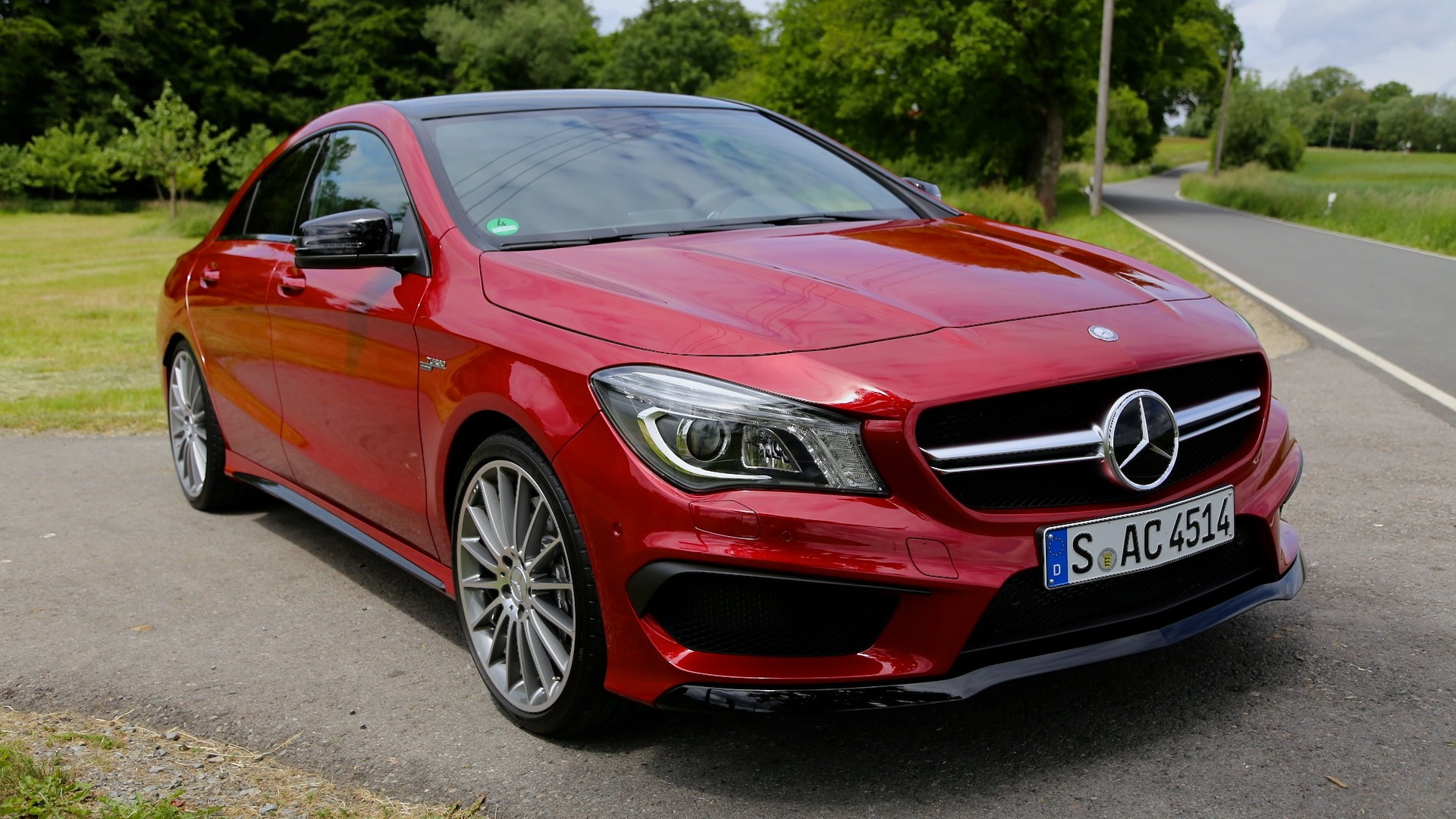 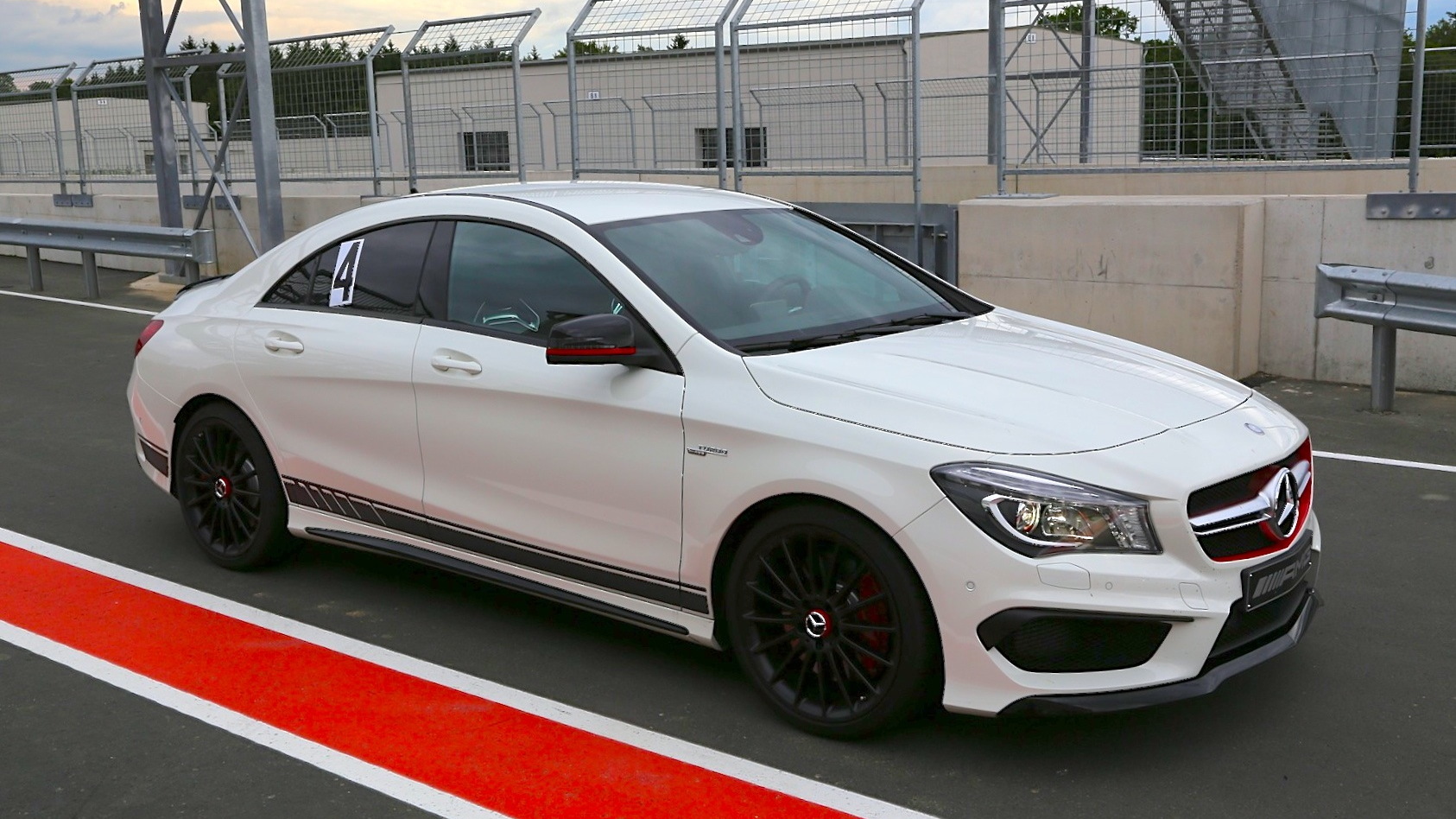 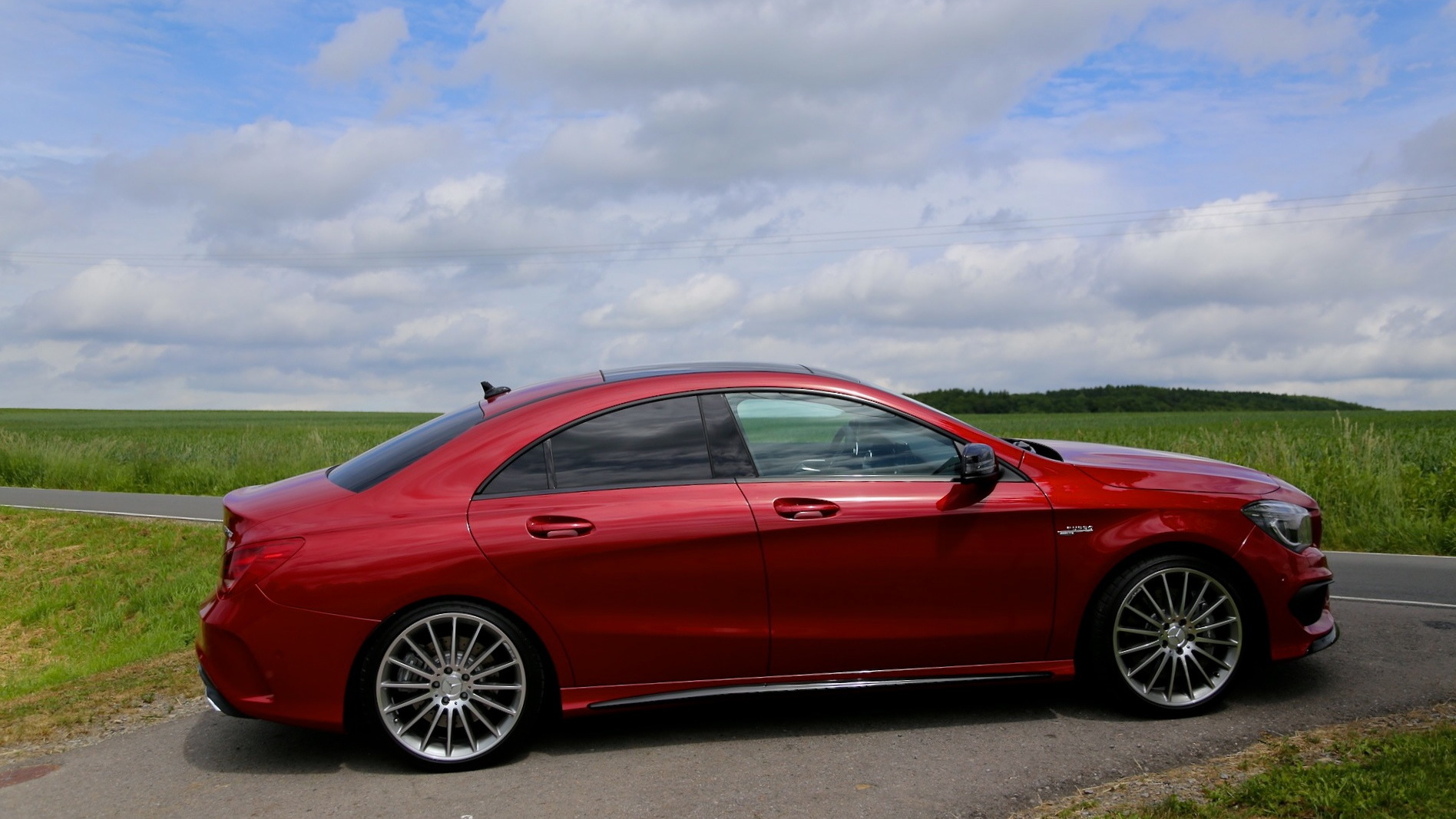 Mainstream success gets a bad rap. Most of the time it's richly deserved, emphasis on the "rich." Bieber, Budweiser, Burger King--they're all huge, and hugely profitable. But even at their very best, they're baseline goods, zero hashmarks on the pop-culture barometer.

When it's done correctly, with a great eye and good aim, mainstream can make money. It can even win over the hidebound dismisserati. Like, oh, us.

Here's our proof: the upcoming 2014 Mercedes-Benz CLA. It's as mass-market as any German luxury car ever has been, and it's poised to be a sell-out, in the most positive sense of the word. And we like it...but not wholly without an agenda.

The CLA's good, but it's a big enabler, too. The cold reality is that, without those big hits, the outliers we really lust for would never happen. No Impreza? No WRX. No Focus? No Focus ST.

No CLA? No CLA45 AMG, the $47,450 gut-punching bantamweight we flung around Germany's Bilster Berg privateer track last week. Part baronial indulgence, part homage to Laguna Seca and Nurburgring, Bilster Berg is also so deeply removed from urban Germany, it's at least an hour to get anywhere with more than one passenger terminal.

Bilster Berg is its own cautionary tale of off-camber esses, but the CLA45 AMG earns its top billing here. This is no Playskool edition performance four-door, no My First AMG. It's a different thing than before but still a verifiably real thing, with 355 horsepower, electronic torque vectoring, performance brakes and bucket seats, a touch of carbon-fiber here and there, and crushworthy brakes.

The CLA45 AMG is the first car to be launched on Bilster Berg's fresh pavement, too. The first to show any Achilles' heels--whether on the track or on the car.

Over its 2.6 miles, time after time, lap after lap, we're at a loss to find any.

Call the CLA45 AMG's beginnings humble if you want, but what comes out the other end isn't so shy or retiring about its talent.

In the upconversion from CLA 250 to CLA45 AMG, the engine, transmission, suspension, steering, and braking hardware get another drive-by, with even more boost, even flatter cornering and far more flattering steering the result.

The standard-issue CLA 250 is perky-quick, with 208 turbocharged horsepower. It'll do 0-60 mph in less than 7.0 seconds, easily. The CLA 45 AMG chainsaws its way into track-ready credibility, cranking up boost to 26.1 psi and lowering compression on the four-cylinder's twin-scroll turbo to scream-machine peaks. Redline is up 200 rpm to 6,700 rpm, the torque peak arrives later and stays later (that's why they call it a party), and a specially designed, optional, active-exhaust system fiddles with a butterfly flap to play punk sax with the exhaust note. It's quiet in normal driving, crazy hot at full boil.

A few months ago, we reported the CLA45 AMG's 0-60 mph time of 4.6 seconds first. They've recalibrated it to 4.5 seconds. In this case, we love being corrected.

The numbers get hit via a seven-speed dual-clutch transmission, with paddles and a console-mounted shift lever. The CLA45 AMG's transmission is reinforced to absorb higher torque input, and its shift schedule is different from the base car's, too. A button on the console toggles between comfort, sport, and manual shift modes, and the AMG gearbox also has rev-matching, making shifts quicker and neater. In manual mode, the only intervention is in your hands, as AMG wants it. A lot of the slow-shifting sins have been absolved.

What's more, the CLA45 AMG's standard all-wheel-drive system adjusts torque from almost 100 percent front to up to 50 percent rear through a multi-disc clutch, and it's responsible for a smoother launch and shifts than the front-drive car.

The rest of the AMG's changes are vetted for maximum return on the performance/price curve. The electric power rack has a fixed ratio, though weight still varies with vehicle speed. The suspension's retuned with three distinct links for each front wheel and with stiffer bearings, since the torque and traction loads are much higher. At the rear, there are four links, coil springs, and a body-mounted subframe. Thicker anti-roll bars are used front and back, and the CLA45 AMG rides nearly an inch lower, on a rear track nearly a half-inch wider, than the CLA 250.

To unleash it all in moderated doses, the CLA45 AMG has a few special talents woven into its standard stability control. A tap on the ESP button sends it into Sport mode, and allows more wheelslip and slide; another tap and stability control goes off. Either mode persists, but applying the brakes will re-engage stability control as long as the brakes are applied. There's also a measure of torque vectoring simulated by the CLA45's anti-lock braking; it applies braking to inside wheels to tighten cornering lines when the car's in ESP Sport mode.

What we found, after an afternoon trolling smooth German surface streets and almost-new track tarmac, is a car that's practically slathered in stick, nearly unwavering in its neutrality. It erupts from a stop with AMG's Racestart in total launch control, and works every rib in its Dunlop treads to make you forget it's based on front-drive running gear.

Bilster Berg is jampacked with lovely scenery that looks quite charming even when it's moving sideways. Slide into its high-speed esses, and the CLA45 AMG is splitting its power equally and tweaking the inside brake to brush off faint understeer. Work around the back half of the track, dive hard into a steep left-hander and put the gas down all the way when you see windmill, and it takes a neatly chosen set while you decide if third or second gear has better legs for the next stretch of straightaway. It can't summon a miracle of sensation from its electric power steering, but doesn't mask the surface of the road or the Bilster Berg track the way Direct Steer can, either.

Our memories of the CLA 250 are still strong enough to draw some comparisons, from drives in early spring. Taut and even tight in the hamstrings, the CLA reaches directly, affirmatively for young buyers who want a very enthusiastic car. The CLA45 AMG seems like another proposition entirely: it's utterly predictable even in its blast off the line, and its drivetrain is mellow when it needs to be. Its ride may even be better controlled, even with optional 19-inch wheels and tires and an available AMG sport suspension, though top-notch German roads forgive a lot of sins. It corners ruthlessly and flatly, dials out most of the CLA's native understeer, and if it suffers in comparison with the wild-hair, rear-drive, V-8 AMGs of recent vintage...well, what doesn't?

All the while, it's flapping its exhaust. The gutter rumble of AMG's V-8s can change your reality--but the CLA45 AMG's syncopated beat has its own butterfly effect.

At the half-century mark

Prices begin at $47,450, not including the $925 destination charge. Unique powertrain, all-wheel drive, and AMG hardware aside, standard features are similar to those on the CLA 250, including power equipment, a USB port, and MB-Tex upholstery.

The CLA45 has its own range of added and optional features, themed around performance. Red-painted brake calipers are offered, as are a carbon-fiber package for the exterior and a similar one for the interior. There's a Night package that blacks out big swaths of exterior trim, and a flat-bottomed steering wheel. And on the highly recommended list, are Recaro sport seats that offer up even more support than the stock chairs, and 19-inch performance tires with black-finish wheels. A popularly equipped CLA45 AMG likely will be priced at about $55,000, Mercedes believes.

Yes, you could have a lightly pre-owned C63 AMG for the same money. And it would be an altogether different car--wildly assertive, frantic, even bellicose. The CLA45 AMG isn't any of those these. It's reassuring, direct, deceptive only in how fast you can go before it washes its hands of the track, the surface, and you. It's a different neural pathway for AMG, for sure.

The CLA45 AMG arrives in November, about six months before Audi fields an S3 for America, untold months more before BMW settles into a new compact-car strategy for the U.S.

Timing's already the CLA's corner. Is the CLA45 AMG its trump card? That question just begs for a comparison, back to back, turn to turn, tire to tire.

We're ready when you are, guys.