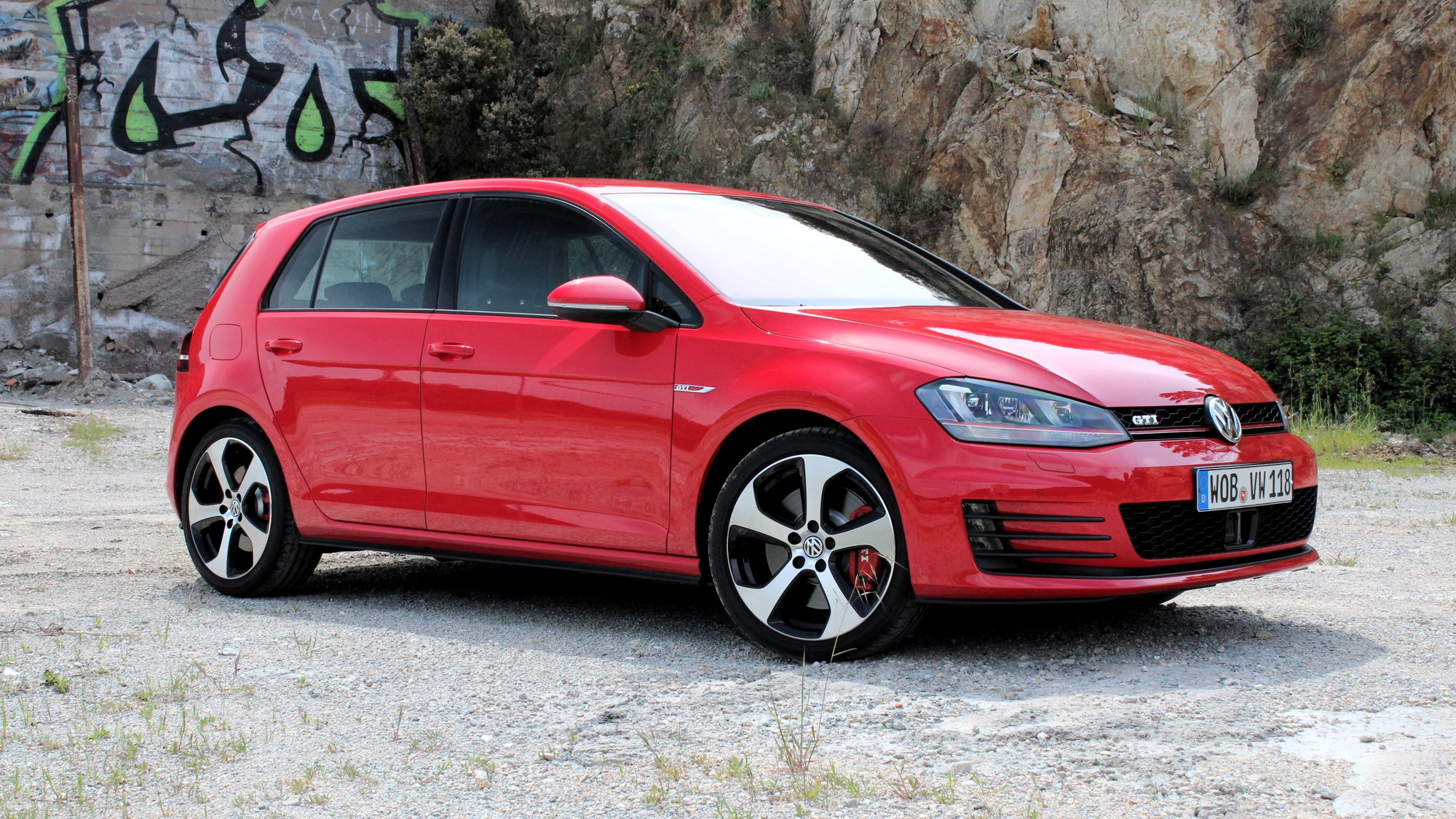 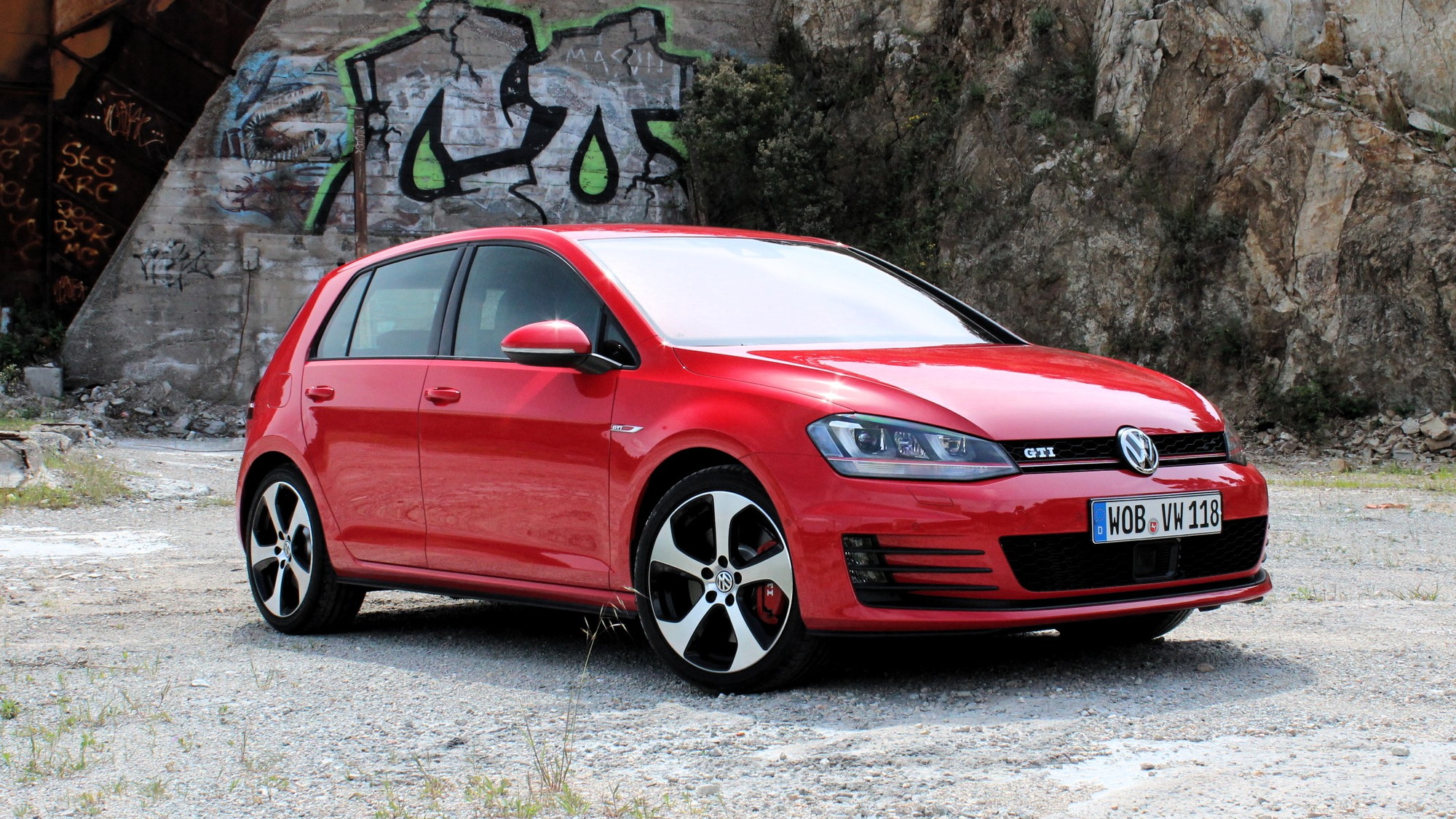 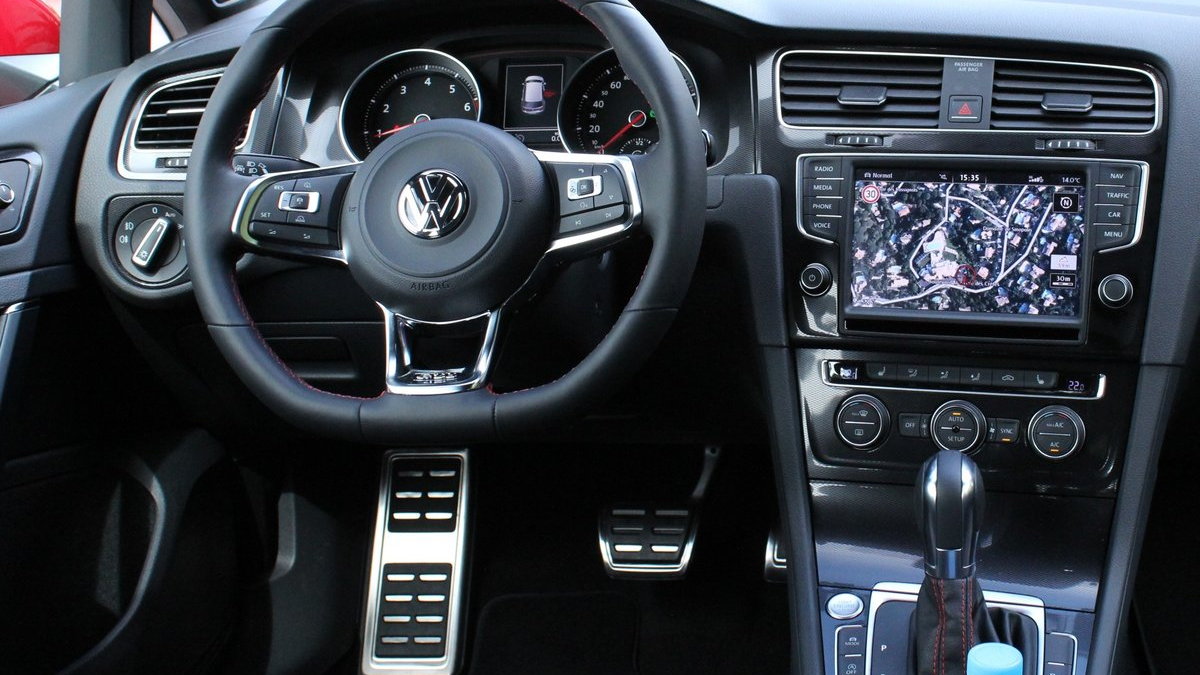 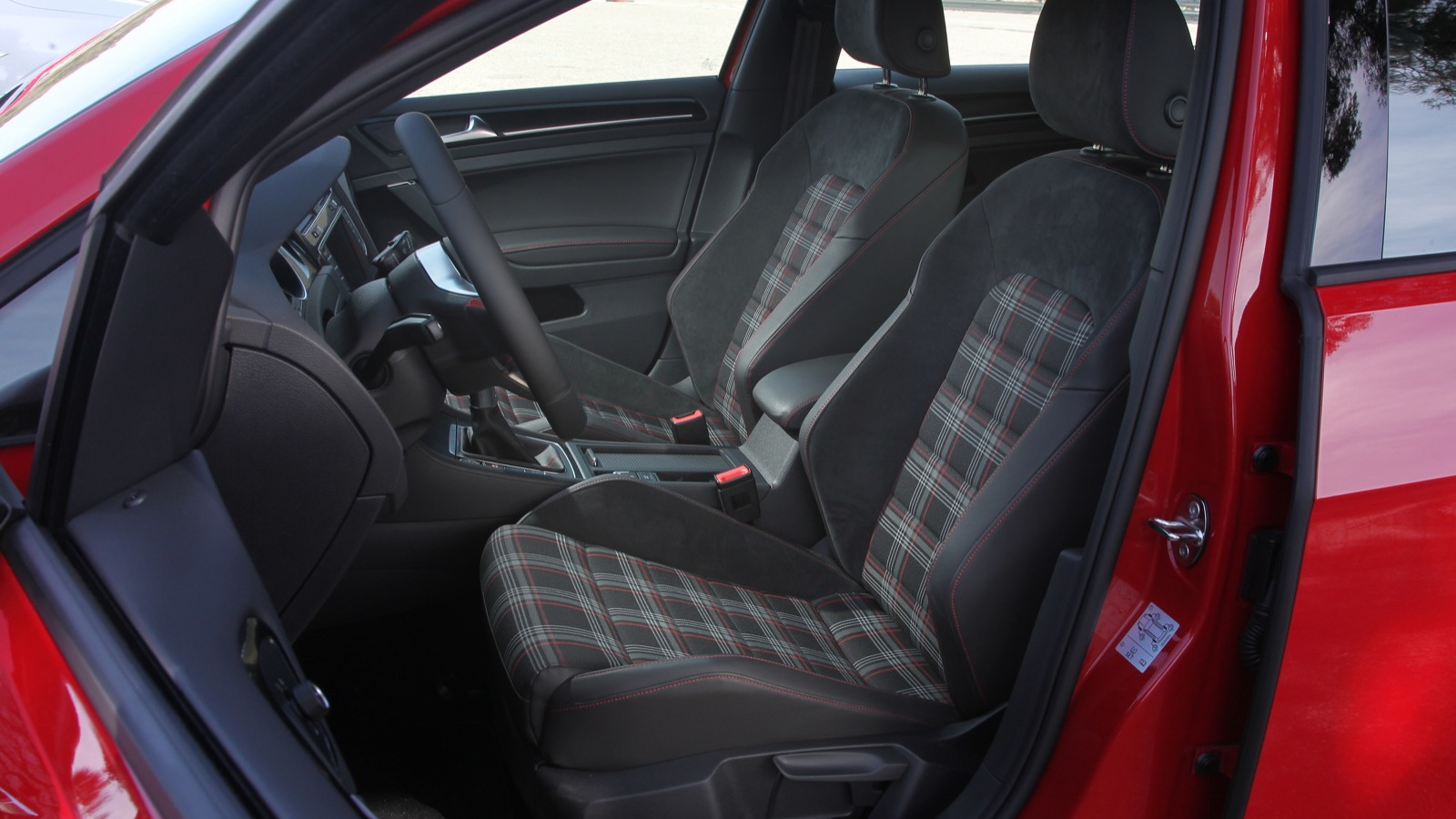 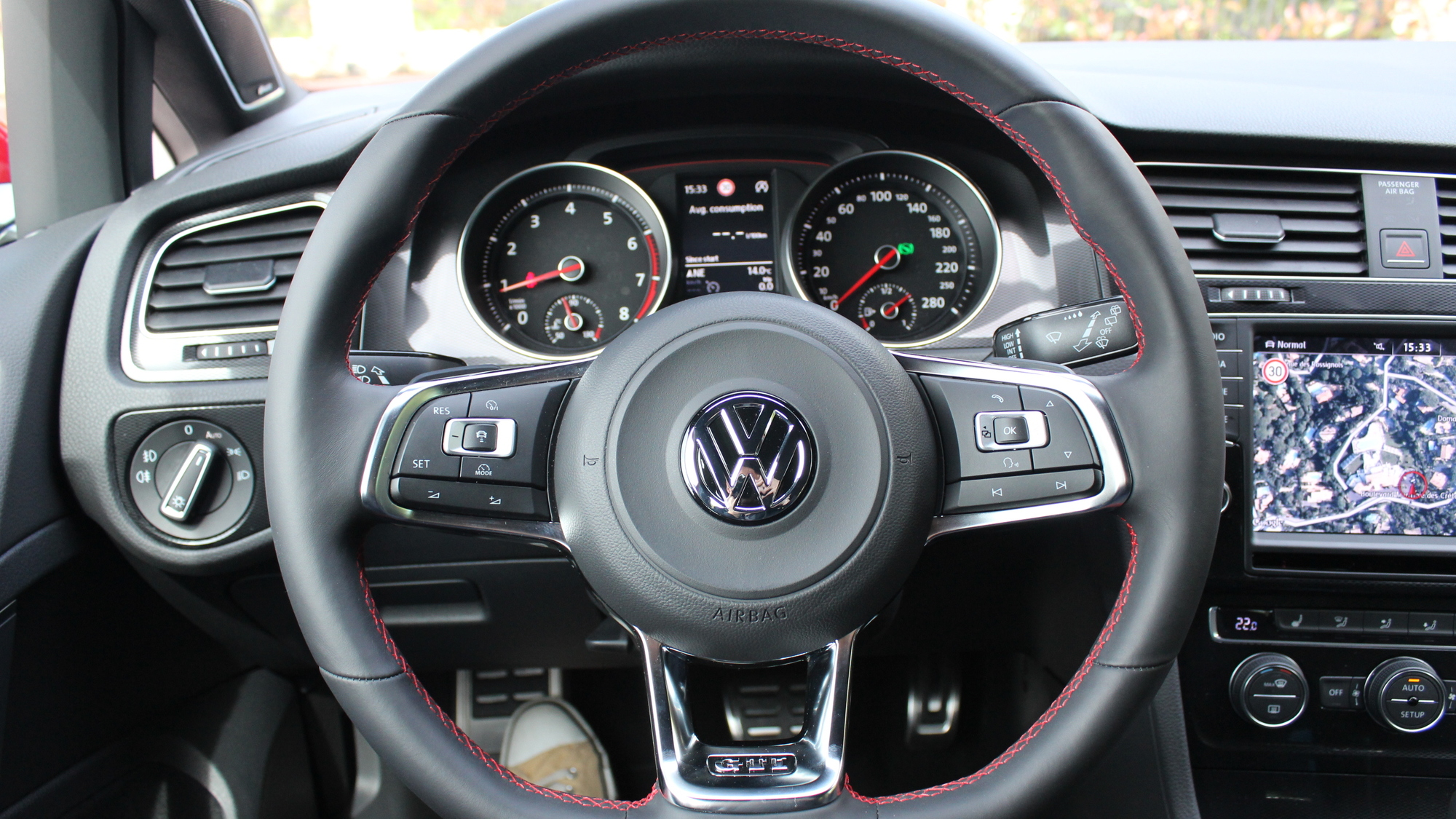 47
photos
We're hustling along in the all-new Mk7 Volkswagen GTI, on a tightly curved back road in mountainous Southern France. Just as traffic opens up and I can see a fair distance ahead, I raise our speed into the next bend. But it turns out to be a flat, decreasing-radius corner. I pull my line tighter than intended; and instead of understeering—or exploring the limits of stability control—we slingshot through the corner, with a sense that, for a moment, we'd warped the rules of how front-wheel drive cars behave near the limit.

What happened in that moment is that, right when it mattered, with my right foot dabbing into the accelerator, the front wheels seemed to simply find more traction and pull right through that tighter line—rotating us through without the rear wheels stepping out, with no dramatic weight transfer either.

But back to reality; this automotive parkour I speak of is surely not due to my driving prowess, but to some smart new chassis engineering in the new GTI. With the Performance Pack, which we're convinced is the only way to get this GTI, when it arrives next spring for the 2015 model year—this hot hatch packs a dynamically heroic one-two technology punch. First, Volkswagen has applied a electronically operated, hydraulically actuated, mechanically clutched front differential that can essentially lock to transfer up to 100 percent of torque to one of the front wheels—or more often expertly vary the mix to send increasingly more to the outer front wheel as you’re cooking it into the apex of a corner.

Secondly, VW will fit all new GTIs with a variable-ratio electric power steering system that is darn near flawless, imparting good feedback, helping tuck those lines in tight hairpins, and allowing a system that can go lock to lock in barely over two turns of the thick, flat-bottom steering wheel.

And altogether, the knockout punch here is how fluid and unflustered the 2015 GTI feels through this 'trick.' Most notably, somewhere between the differential system, the steering, and the front-end geometry, VW seems to have completely quelled torque steer.

Knockout handling, and quite the punch

That would otherwise be a concern, because there's a lot of torque. Standard versions of the GTI are up to 210 horsepower and 258 pound-feet of torque, while with the Performance Pack it makes 220 hp and the same torque output—although different engine controls make boost more available when you need it, in transitions, and there's an even broader range for peak torque. What it means, essentially, is that while the throttle is even and easy to modulate from a stop, if you press further you'll reach a point when a groundswell pins you back in your seat—and helps pull you quickly out of each corner, even if you're a gear or two too high.

VW's DSG dual-clutch automatic keeps getting better, too; here it clips through the gears with as much urgency as ever, but it's better than it used to be for drivability in the lower gears. Steering-wheel paddle-shifters give good control, too; we just wish that VW wouldn't force downshifts, even before you click the accelerator detent.

The manual gearbox in the GTI is an excellent choice as well. With one of the easiest-to-modulate clutch pedals among performance cars in any price range, you won't mind stop-and-go traffic. The linkage is a little imprecise, but the shifter glides nicely between gears once you're used to it.

As for braking, in any versions of the new GTI, the pedal is a little on the touchy side for driving in traffic. But these stoppers feel super-confident in higher-speed slowdowns, and with the Performance Pack you step up to bigger 13.4-inch rotors in front—commensurate with that model's 155-mph top speed. It also drops 0-62 mph times by a tenth of a second, to 6.4 sec.

The engine itself is technically carried over—with the same EA888 engine code, 2.0-liter displacement, turbocharging, and direct-injection technology—but much has changed. The cast-iron block has been slimmed, and the cylinder head is entirely new, with water-cooled exhaust-gas recirculation (EGR) loop especially of note. That helps improve fuel consumption in conjunction with the variable valve timing system and dual camshaft system.

The GTI is also around 50 pounds lighter than the outgoing model (we'll see exactly how much when the U.S. car is spec'ed out)—in moving to the new MQB VW/Audi front-wheel-drive platform—and the weight loss combined with the added kick of the engine make this GTI feel faster than the previous Mk6 car, even if all-out acceleration times are around the same.

Performance Pack: Get it.

You might also notice we're talking a lot about the Performance Pack. It's something that will be offered in the U.S. GTI, although pricing, and exactly what's included, are still on the table. We know it'll wrap together the active-diff system, brake upgrade, and a few other items—although it might or might not include the summer-performance tires our test cars were fitted with. Variable damping is also a wild card, and could affect general refinement when it lands on these shores. In any case, we think this package, which will likely cost less than $2,000, will be the way to go.

Without the Performance Pack, the 2015 GTI gets by with an all-electronic e-diff system, essentially leaving torque-transfer duty to the brakes. It's likely you'll want to check that box if you have track driving in mind.

As it is, though, the GTI is hands down the grownup of the hot-hatch group. For its dynamic prowess, quick steering, and immense torque on tap, the GTI is the small performance car we'd pick for a long daily commute, or a cross-country drive. Ride quality is great; the interior is definitely the quietest of this class; and the standard seats are not only well-bolstered but generously sized and genuinely comfortable for a wide range of driver types. There's no seat option like the Recaros in the Focus ST, but we're fine with that.

The interior is hands-down the best of any small hatchback anywhere close to this price, with nicely coordinated materials, matched surfaces, and consistent button faces and lighting. All the details are right, in a way that few other sub-$30k performance cars get. We also appreciated the wide footwells, good-size dead-pedal area, and pedals that don't require narrow Pilotis to enjoy. The driving position is a bit low (the consequence of dropping the overall height yet preserving headroom) yet upright, and you look out over a bulbous hood that now disappears to vague vehicle corners. C-pillars are thick and can cut visibility when changing lanes but, well, that's a Golf-family trait we've known for ages. Tartan pattern upholstery is another carryover. And other upgrades include red ambience lighting, a stainless steel doorsill, plus brushed stainless steel pedals.

In back, there's just a bit more space than you might remember if you've been in other Golfs or GTIs; a fold-down center armrest (with cupholders and a ski pass-through) and decent headroom make it doable for two adults, provided they're not behind lanky ones in front. And of course the seats flip forward. Up front, an under-seat tray, for odds and ends (we’d put soft things like gloves and a hat down there) is a cool touch.

Conservative look, but a big step up in features

As for the exterior? The look is still understated (just think if VW *could* have combined this chassis with the Scirocco's look), and while VW in the U.S. sells the GTI as a separate model, it’s every bit a performance variant of the Golf. We’ll let you be the judge, but the new GTI (and Golf) are evolutionary—a little more chiseled in front, with hoods a little lower in front but curved outward, yet a familiar profile altogether. The GTI's fanned-spoke 'Austin' wheels and red calipers are the two most daring attributes, and GTI continuity is achieved with that little red line that runs through the grille and headlight area. One big advantage over other performance-hatch models is that with the GTI you have a choice between two- or four-door body styles; that's slated to remain the same in the U.S.

According to VW's home offices, the engine improvements have boosted fuel-efficiency by 18 percent in the new GTI; U.S. cars are projected to get ratings of 24 mpg city, 34 highway (subject to change).

Here's where it gets a little hazier. U.S. cars will get the same interface and eight-inch touch screen, essentially, but audio will be a continuation of the current (and well-received, VW says) high-end Fender setup rather than the European market’s Dynaudio system. The new gen-7 GTI gets upgraded infotainment, with Car-Net, and available navigation with Google Earth and Street View maps, and live traffic data, and all that is supposed to arrive on these shores. Adaptive Cruise Control, City Adaptive Braking, Emergency Braking, and Lane Assist are all possibilities; so is stop-start (which was very smooth in our Euro-spec cars).

The 2015 GTI, as it will arrive to the U.S., is still nearly a year away (think March or April 2014 for first deliveries), and the U.S. GTI will be built in Mexico, but these versions we drove are in most respects on par with what we'll get, VW assured us.

Versus Focus ST, it's a matter of personalities—theirs and yours

With the arrival of the Ford Focus ST this past year, there's fresh competition in North America at last, among hatches. It's a lot of fun; just with its predictable slingshot cornering, it's dynamically a different beast than the Focus ST, which seems to invite you to provoke it in corners, just to get the rotation that its setup allows. We dare say that the setup in the 2015 Volkswagen GTI will be more rewarding to those who drive with finesse—and we look forward to testing it out on any road course, where we think that the Performance Pack model might turn out better times, despite the lower power rating than the ST.

It's also refreshing to see Volkswagen give the GTI a little more attitude than the outgoing Mk6 version. Even if it looks conservative, the new car is deft, athletic, and it really does make you feel like the hero. Step right into almost anything else and that parkour you just performed will seem unfathomable.