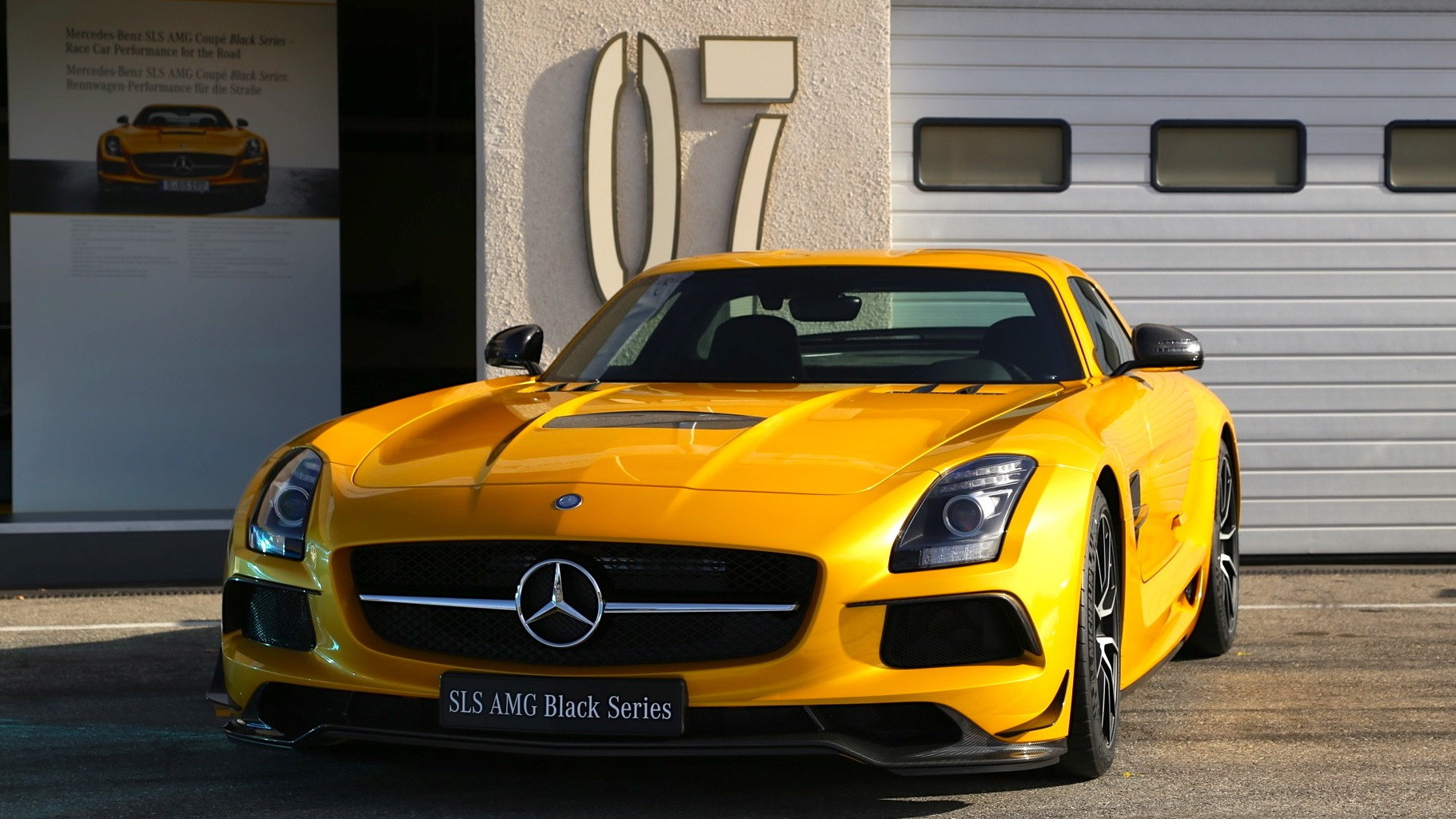 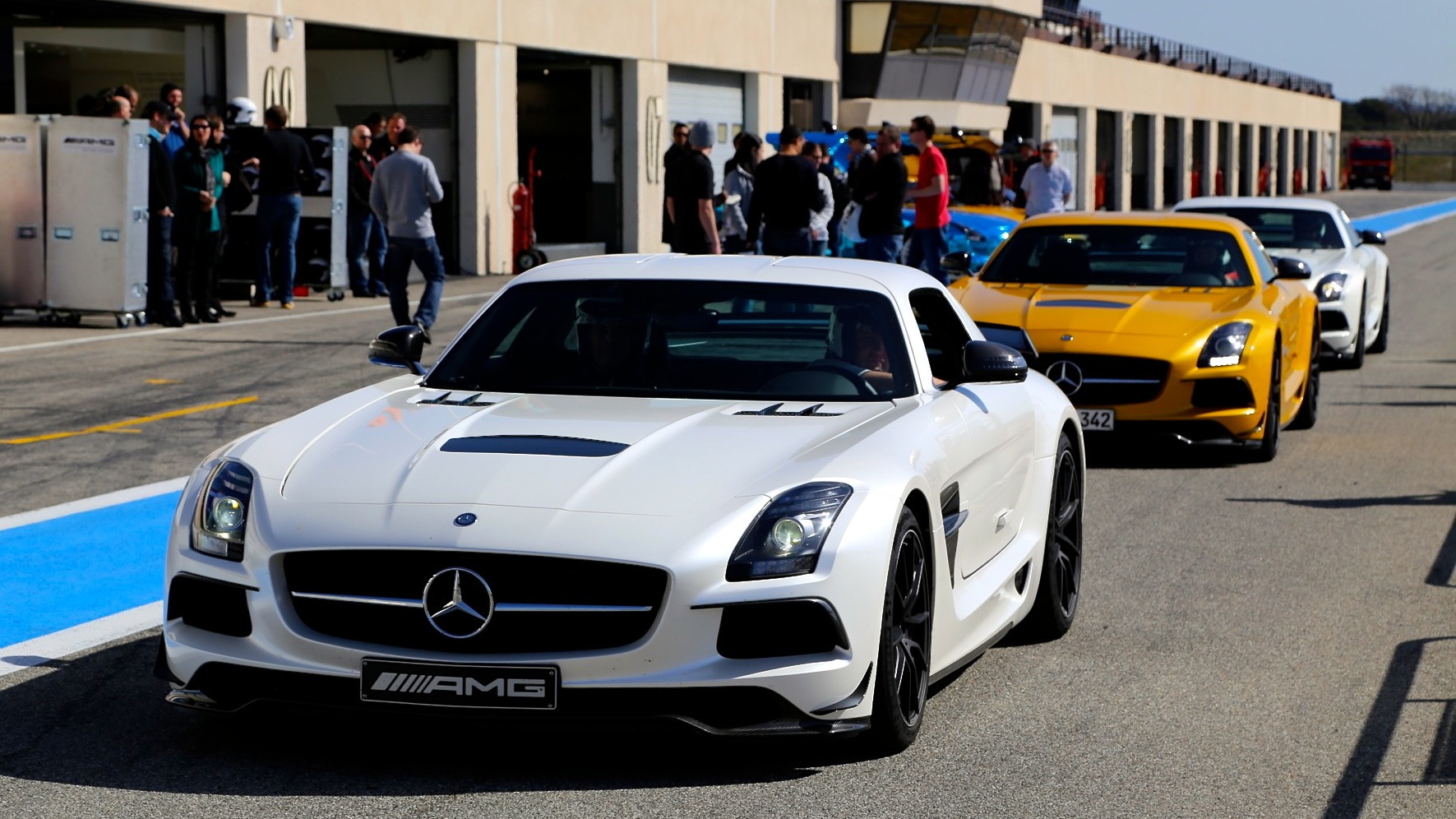 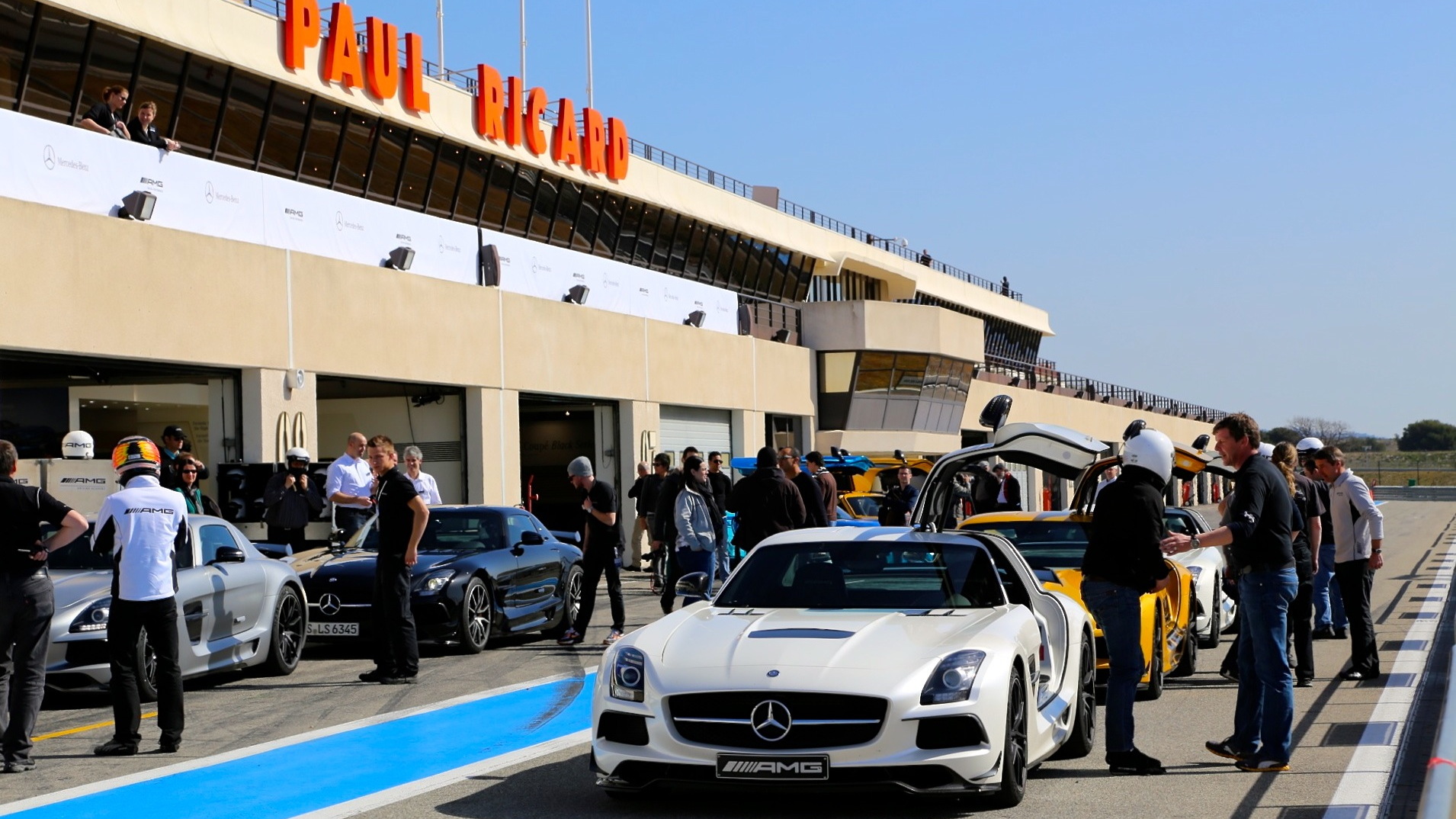 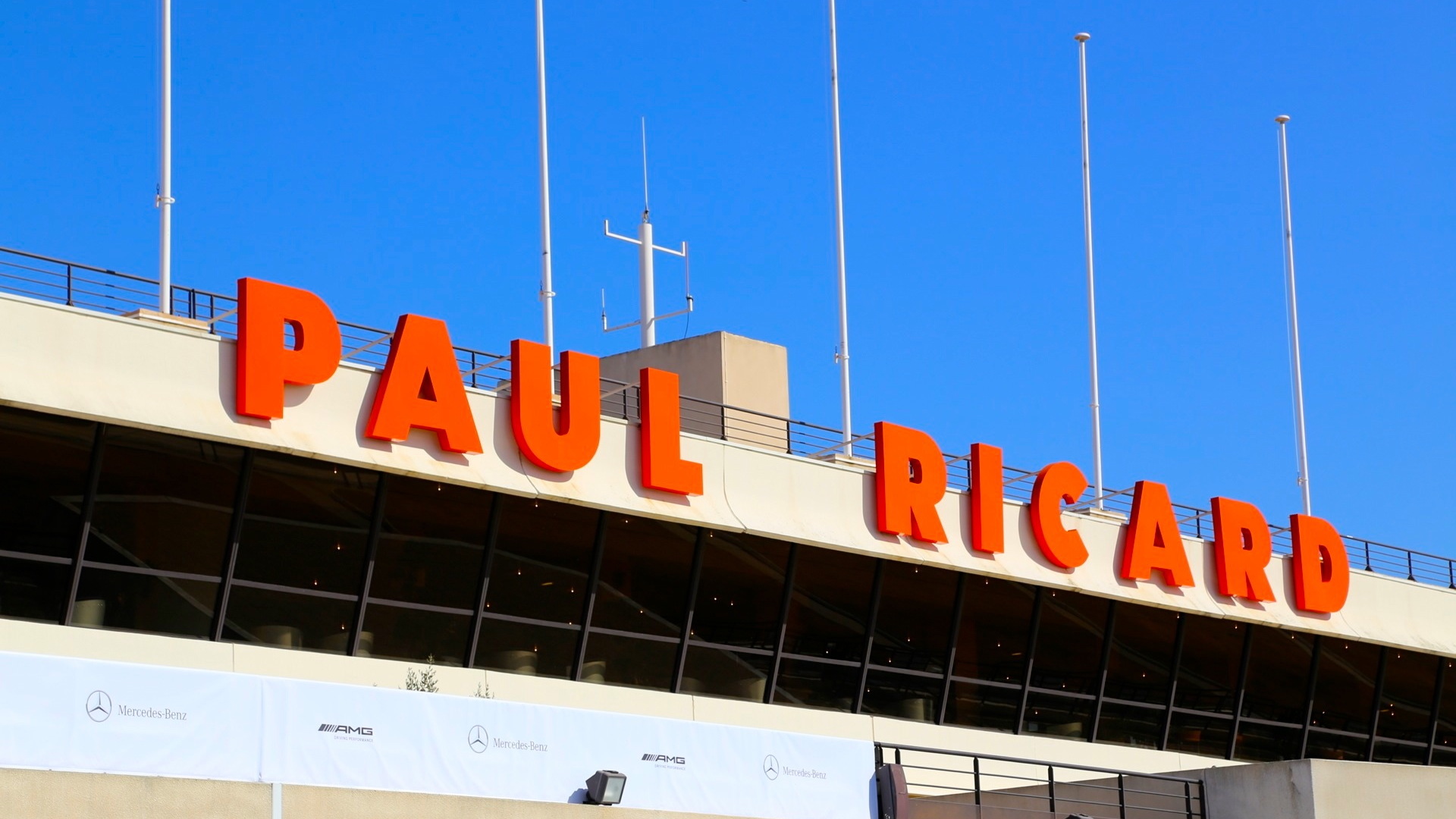 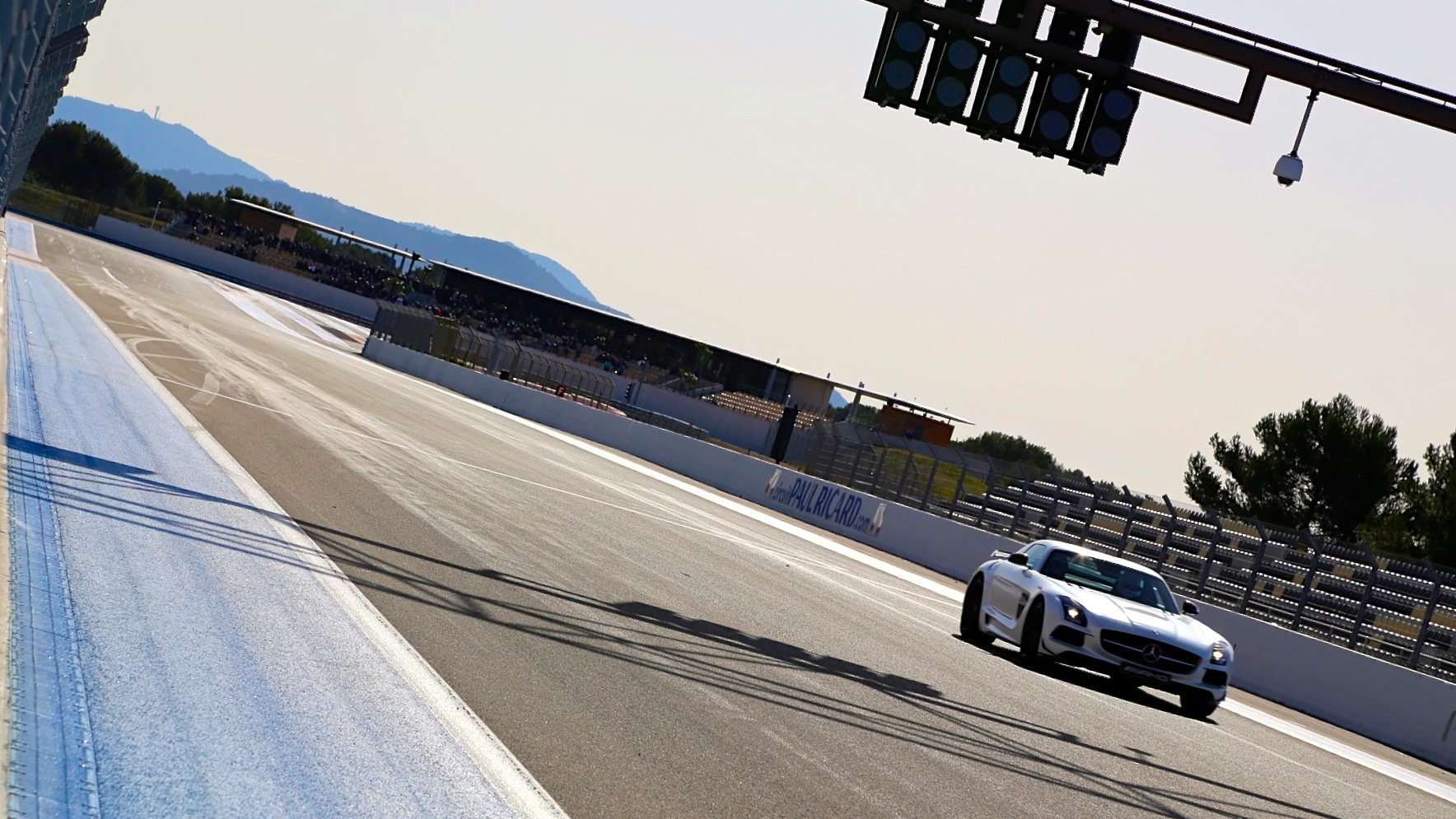 Have we driven the Mercedes-Benz SLS AMG enough? You tell us. We've flogged it in its debut form as a gullwing, as a roadster, as the new SLS AMG GT, and as a GT Roadster in a weekend joy ride. We've even driven the Tomorrowland edition, also known as the SLS AMG Electric Drive. We've chunked the treads off so many AMG tires...the metaphor eludes us.

You could say we've met.

Essentially a GT3 racer for the road, the SLS Black Series mates up perfectly with southern France's Circuit Paul Ricard, a fast track with two huge, open right-handers that offer textbook instruction on throttle modulation at the limits of traction. Figuratively, not literally. Don't go there and ask them for a book, or an outline, or even Cliffs Notes. They don't have any.

Here's what you do instead. Take a Black Series, take a set, and feather your way through what can feel like an eternity.

The badassery that is Benz' Black Series begins as AMG engineers sniff at the base car's 583 horsepower. Great isn't good enough? A few twists of the usual screws--engineering, workplace/HR, etc.--yield 39 more horsepower from the 6.2-liter naturally aspirated V-8, a net 622 hp in all. New cams and intakes and better cooling are responsible for the rise. Horsepower peaks way up at 7,400 rpm and the AMG engine's spectacular bel canto doesn't brap out until it hits an 8000-rpm redline.

Oh dear, just 468 pound-feet of torque. That is a slip from the stock car's 479 lb-ft, but if you can sense the difference, get your Wolverine-keen senses a drink. It's hardly missed, since there's 154 pounds less to tug around. Carbon fiber subs in for the driveshaft, crossbeams, hood, and tunnel; carbon-ceramic brakes shave off 35 of those pounds; the battery's a lithium-ion unit for another 19-pound drop. The exhaust system's fabricated from titanium alloys, a final concession to get weight down to 3,417 pounds. The sweat equity's paid back in the form of superior weight distribution.

For a final spritz of Black Series freshness, the seven-speed dual-clutch transmission's been reprogrammed with a new shift schedule that's closer to race quickness than streetgoing softness. It matches revs on downshifts through its four shift modes, and it's also acquired dampers of its own, to filter out motion it might transfer to the chassis. The track is widened, forcing some mild body accommodation, which in turn cuts a mile per hour off the top end. The Black Series also gets an electronic rear diff lock, staggered 19- and 20-inch treads, and the same two-mode shocks as the rest of the SLS AMG GT lineup.

The bottom line: 0-60 mph in 3.6 seconds, a couple of ticks faster than the standard SLS, and a top speed of 196 mph, off 1 mph for those aero reasons. Spec hounds know that's not hugely quicker at the first time than a four-door E63 AMG, but warming up for the SLS in that very supersedan couldn't have been a better primer. Those first 3.5 seconds in a straight line? Pretty similar.

Everything that came after? Hmm...a flip through the Pocket Hipster dictionary offers only this: "Not..so...much."

Quite the opposite (lock)

Here's the part where we step aside and let the Black Series speak volumes for itself. Mostly.

You don't have to strain to see the Black Series' beefier coachwork--the matte-black wheels are a dead giveaway--or to hear the incredulous gasp and roar of that tremendous AMG V-8, or the frantic light pitch of its Michelin Pilot Sport Cup 2 treads. But the Black Series doesn't spill all its secrets to the nearest GoPro. It transmits reams of information, sub rosa, through the tires and low-assist hydraulic steering rack. It's not just more communicative than the non-Black SLS as a result, it's more relaxed.

Push the start button, dip a toe into the throttle, and this SLS elides its distinctions very briefly. Roll out of pit lane, bank past a cone, and hear it bark out a four-letter equivalent from deep within those titanium pipes. Whenever this big AMG engine finally goes away, we'll miss it: like the SLS itself, it's one of the most subconsciously American pieces of work to come from Mercedes, including the Alabama-built SUVs.

Flick a paddle and the dual-clutch clings to gears manually as long as you're able and into it. After a half-minute it relaxes back into full automatic cruising, but there's never a stretch at Paul Ricard where that's an option, where a double-downshift isn't warming up on deck. Or just wicked good fun.

Rip around and, try to wipe that smile off, would you please? The Black Series clearly is in love with its leaner body. It's alive, from the faintest feint right or left.

Dig as deeply as you want in the pair of right-handers. Sport-moded stability control lets a righteous amount of oversteer play with the rear end, then clips it safely when the SLS gets too close to a relapse. It's naturally inclined to swing luridly, but the electronics enforce balance on its particular alchemy of power, weight, and distribution.

Finally, when you're totally dialed in--when you're really ready to show off--give the Black Series a half-dose of gas on the 90-degree bend that angles onto the main straight. Perfectly executed, it's the fastest line around.

No time to waste on golf claps. You're on again, this time for a full-throttle assault on the next lap. Try not to do what the car ahead at the very start of the video did.

Ah, wait, before we go, one more thing. It's rare we get sidetracked by an actual track, but we never answered our own question from all the way back in paragraph one.

"Have we driven the SLS AMG GT enough?"