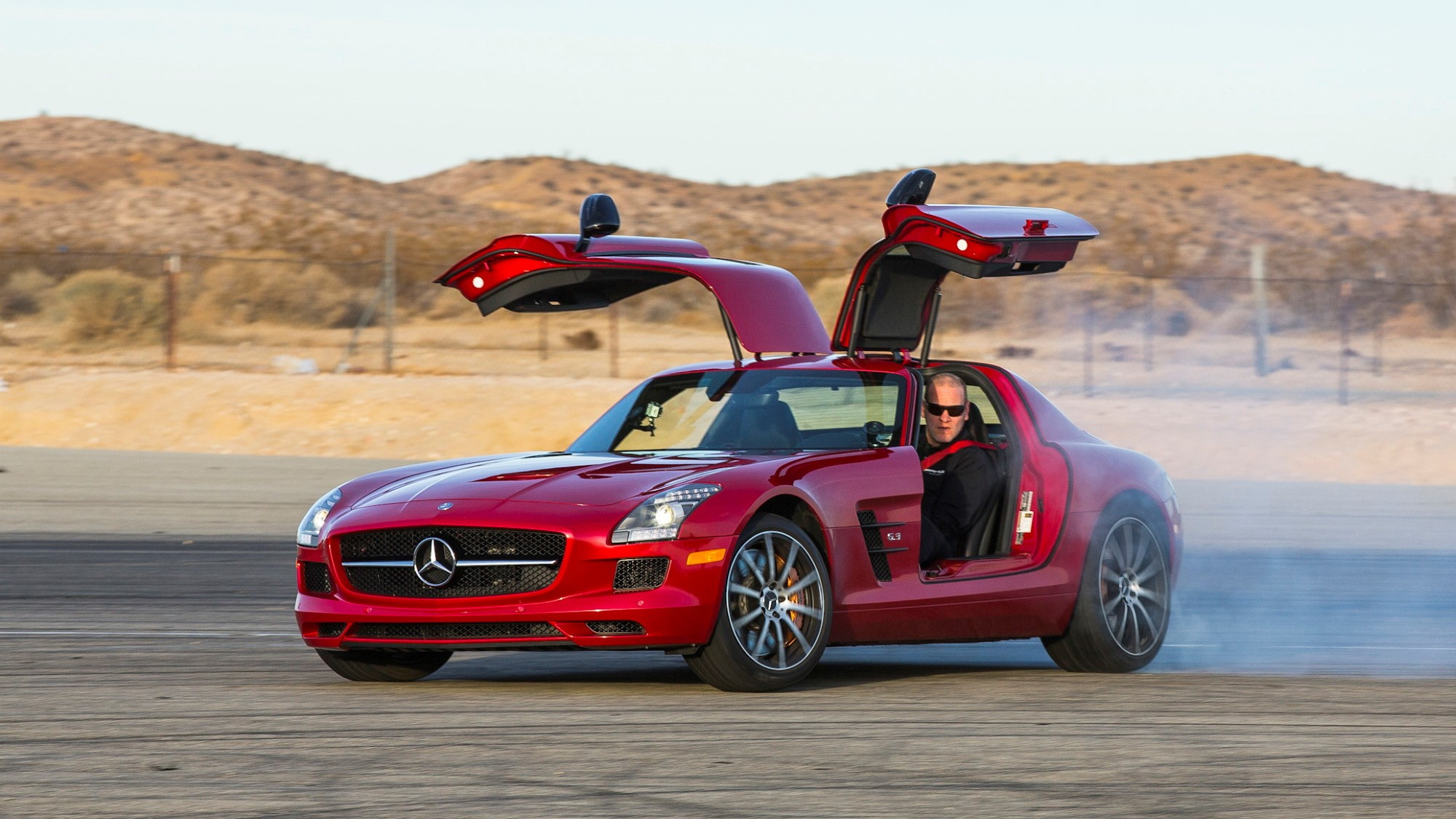 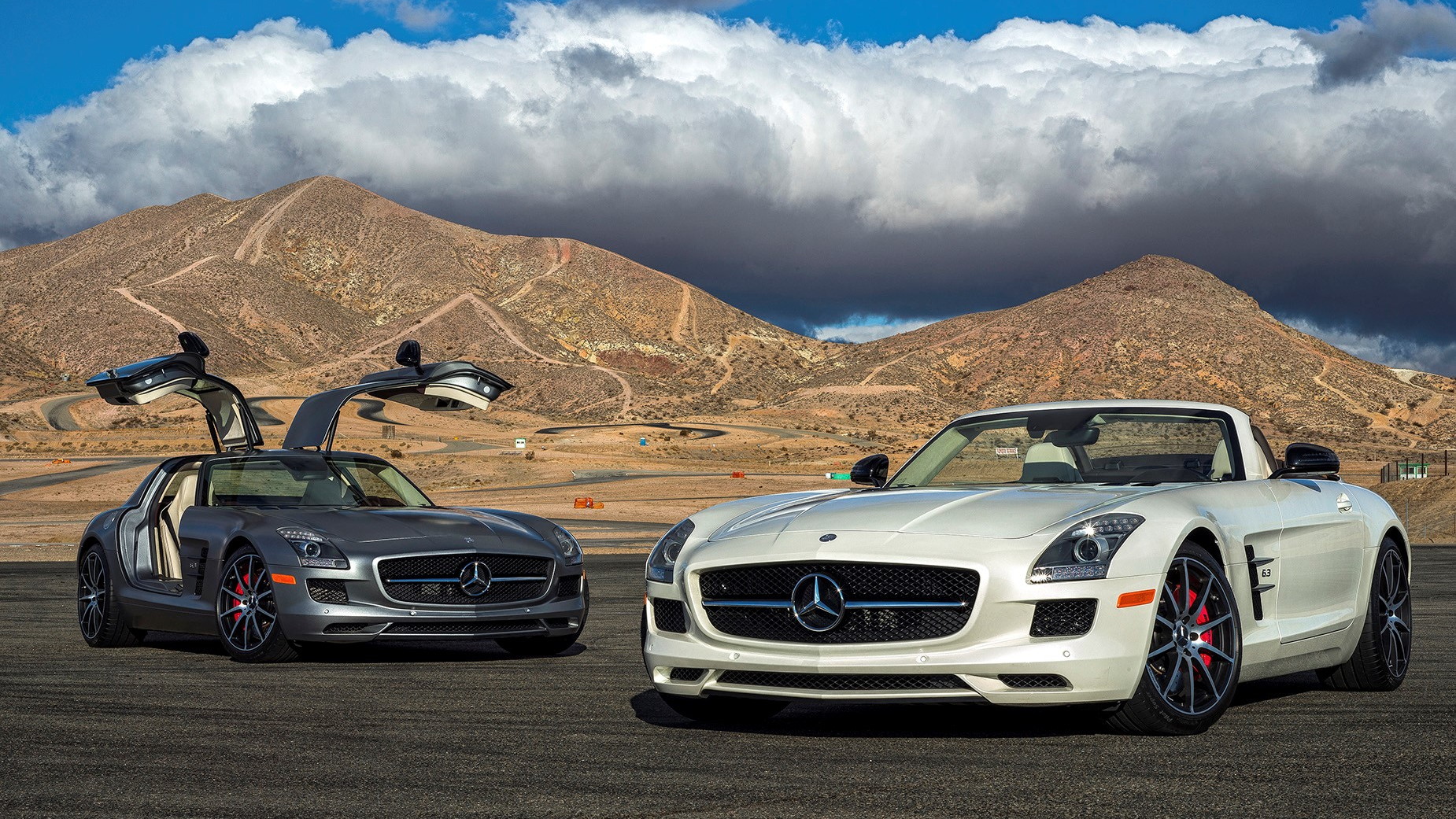 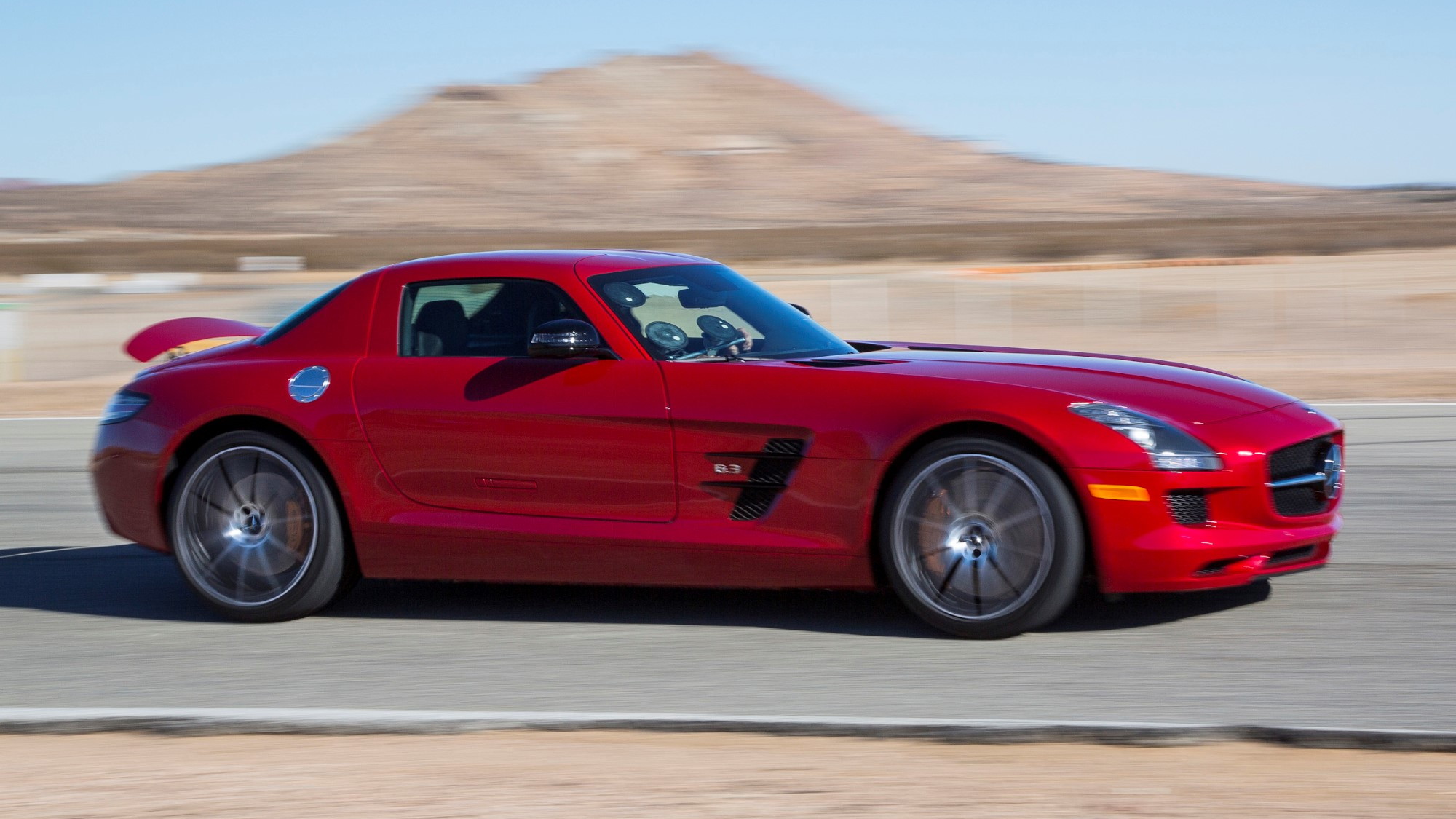 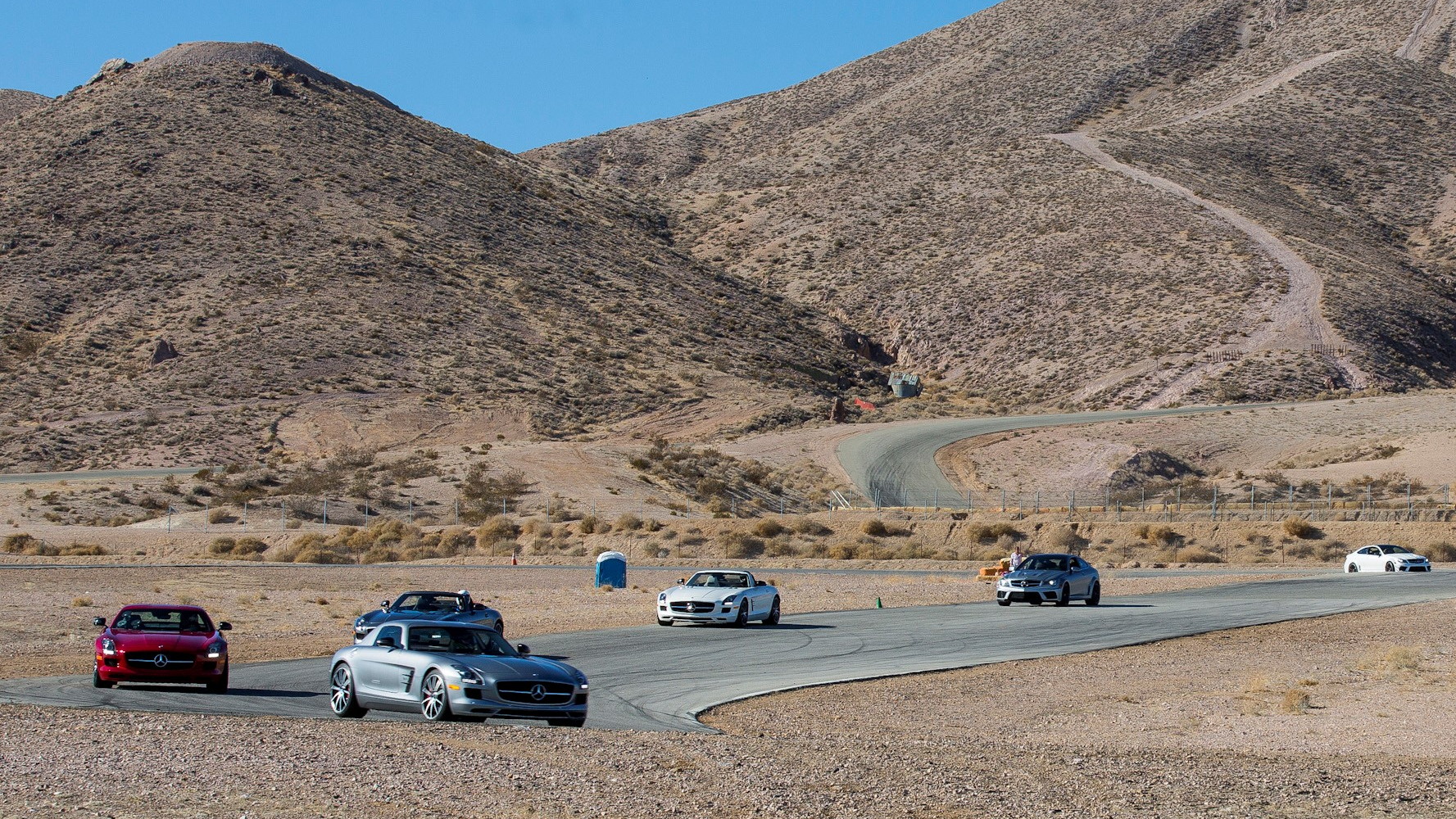 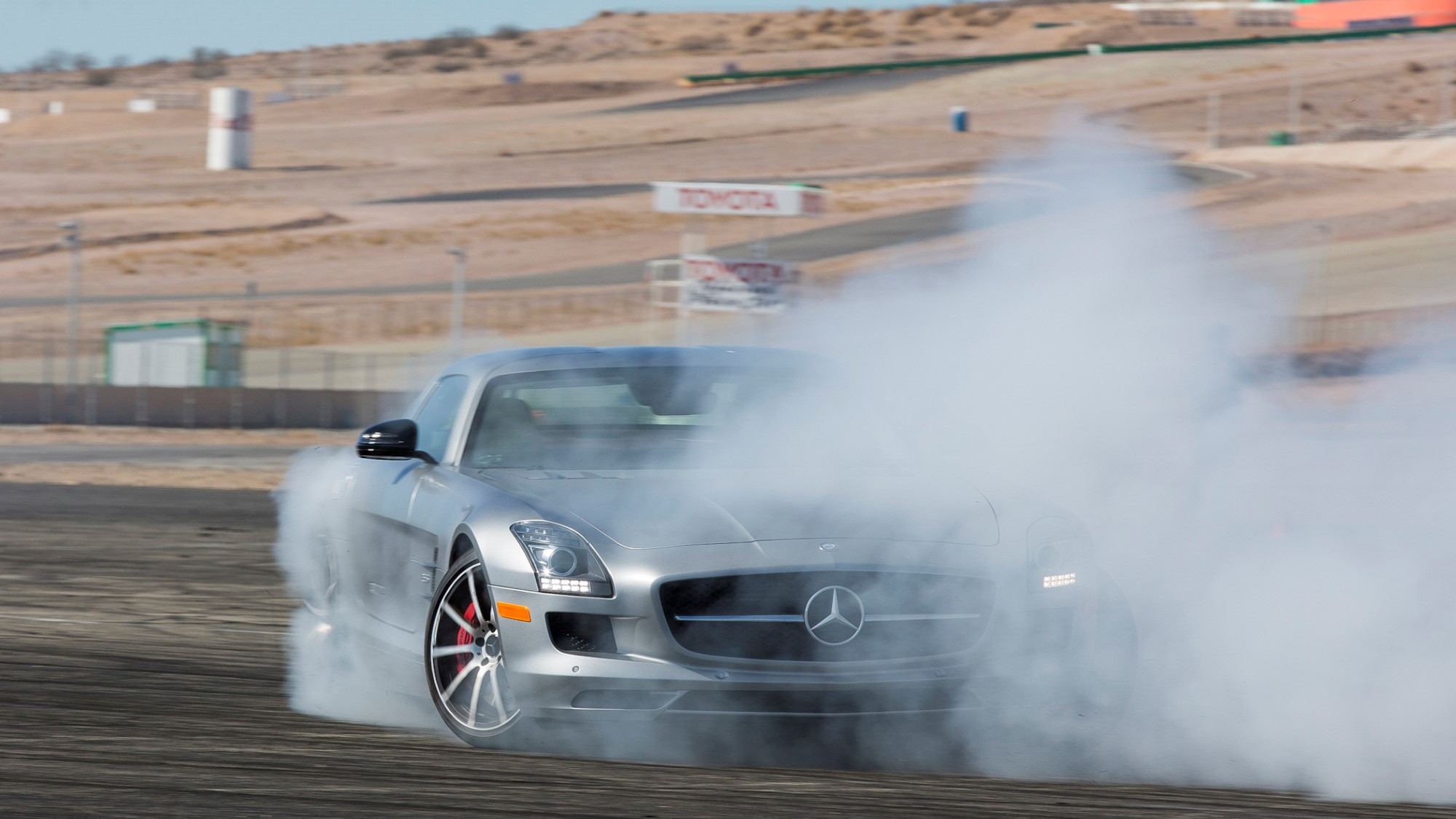 56
photos
It may seem like the life of a traveling auto writer is all unicorns, rainbows, and thumping V-8s (or V-10s or V-12s), but track-testing a new car can be tough. You have to learn a new track as you learn a new car, typically in a very short period of time and in a limited number of laps. In high-horsepower, expensive cars, the risk factor rises even higher.

But sometimes, it can be borderline magical.

A couple of weeks ago at the Streets of Willow, the tight, small course set off to one side of the famous Willow Springs Raceway, the 2013 Mercedes-Benz SLS AMG GT was my unicorn, and it spread tons of smoky rainbows from its rear end with the aid of its thumping V-8 and Tommy Kendall on its back.

That thumping V-8 has been updated for 2013 and the arrival of the new SLS AMG GT name: 12 horsepower stronger at 583 total, though torque remains flat at 479 pound-feet. The extra power shaves 0.2 seconds off the 0-60 mph time of the previous non-GT SLS AMG, down to 3.6 seconds. Also new for 2013 is a re-tuned version of the AMG Adaptive Performance Suspension, enabling electronic adjustment of the ride and handling characteristics. The seven-speed dual-clutch transmission has also been sharpened, offering quicker shifts and more seamless application of power to the rear wheels.

But underneath the extra power and new gadgets, the SLS AMG GT is still very much the car it was before: it likes to get loose. Turn in to a corner too quickly (or trail brake a touch too much), stomp on the gas a bit early at track-out, or otherwise ask for too much traction with a lateral load applied, and you'll find the rear end is the one that gives up first.

This oversteer-biased nature makes for a lively drive, to say the least, and helps the rather large and heavy SLS AMG GT feel like a smaller, nimbler car in slower or tighter strips of road or track. But in high-speed elements, the rear-happy handling can make the car feel nervous and twitchy--a feeling you don't want when attempting to corner at a buck fifty.

All of that said, we've always preferred a slight bit of oversteer to the other alternative: nose-first plowing understeer. It seems a much more difficult balance to achieve for most manufacturers, with the understeer dialed in to many cars--even high-performance sports cars--from the factory tending more toward terminal than toward the mild, easy-going sort that helps plant the rear and improve lap times.

Of course, the SLS AMG GT is also a luxury car, and while we didn't get to test the new gullwing (or roadster) on public streets, our time spent sitting in the pits in the cabin was refreshing. Updates to the interior over the years since the SLS AMG's introduction have accumulated into a classy, modern look that avoids any kitschy, trendy feel.

A clear and well-laid out control set on the center console matches to simple and straightforward steering wheel (with the nice big paddle shifters mounted to its back). The optional quilted seats are a beautiful touch, and suit the SLS AMG GT well. Throughout the cabin, you'll find quality materials and a clear attention to each detail.

That's not to say there aren't some issues with the SLS AMG GT's cabin. If you're tall, or even tall-ish, you'll note the lack of headroom in the gullwing coupe--with a helmet on, few of those over six feet will fail to rub the ceiling. When it's time to get out, however, those six-footers will hope they do have a helmet on, as it's easy to forget those gullwing doors are hovering at just the right height to brain you on a careless exit. Shorter drivers will be left flailing for the handle if they forget to grab the door on their way down into the seat. It's an imperfect system, however sexy it is.

The Roadster skips most of these problems thanks to its much more conventional power-retracting soft top. It's also the more comely of the two to our eyes, wearing the long and low proportions of the car well, and exposing the gorgeous interior to more eyes with the top down. It also exposes the ears to the song of the superb 6.2-liter V-8 under the hood. Another bonus.

On track, the Roadster isn't markedly less agile or able than the coupe. Even driving them back-to-back, it's not a massive difference, despite the Roadster being a bit less than 100 pounds heavier and a tick less rigid. If you're after the SLS, and you want the Roadster, you'll get no complaints from us. Both are very fast. Scary fast.

At the end of a too-short day on track with the 2013 SLS AMG GT, would we buy one? Definitely.

Who needs a house, anyway?

For more details on the 2013 Mercedes-Benz SLS AMG GT, be sure to read our short-take overview here at Motor Authority and the more in-depth take at The Car Connection.

Mercedes-Benz provided airfare, food, and lodging to enable us to bring you this first-drive report.