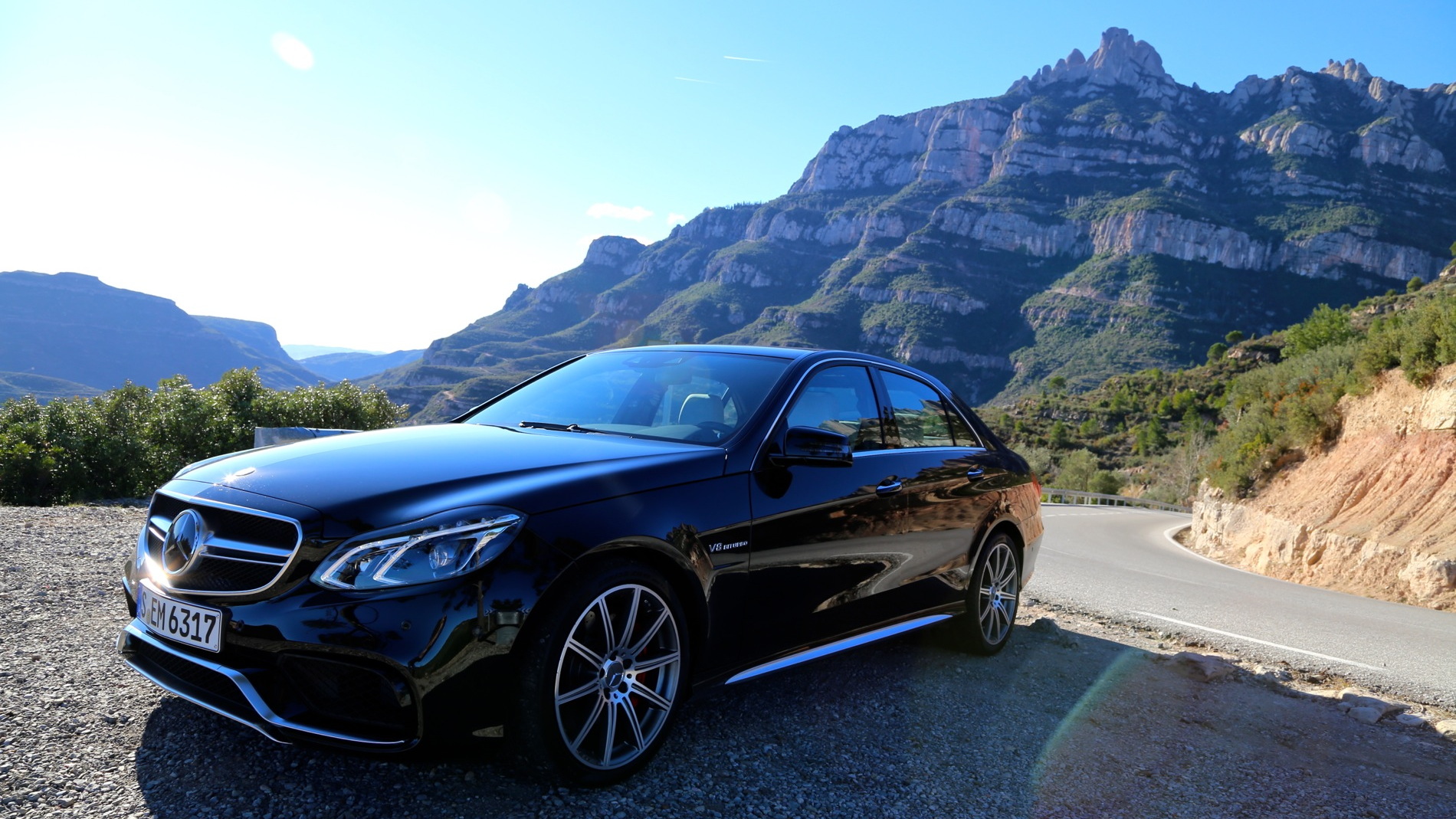 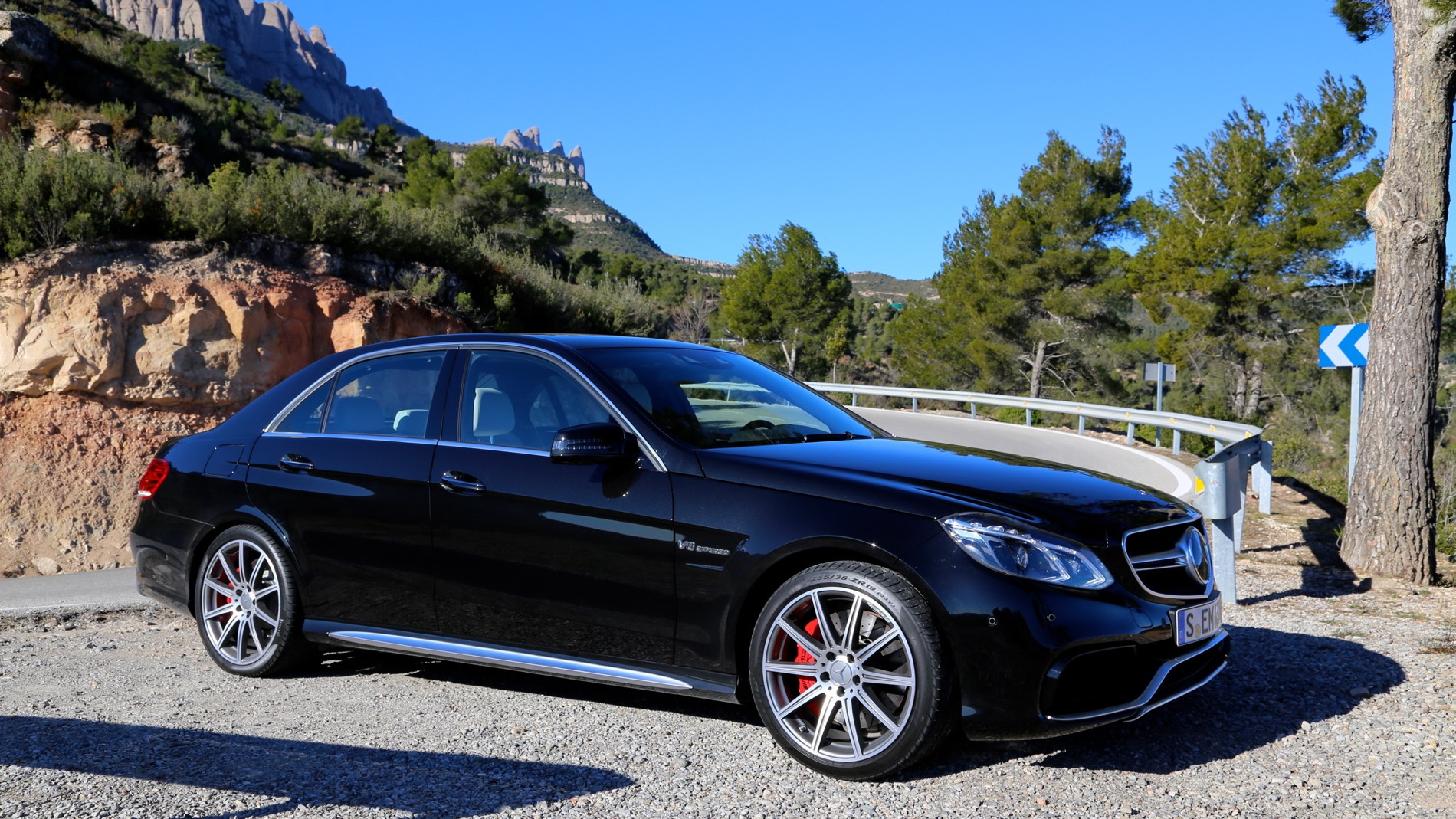 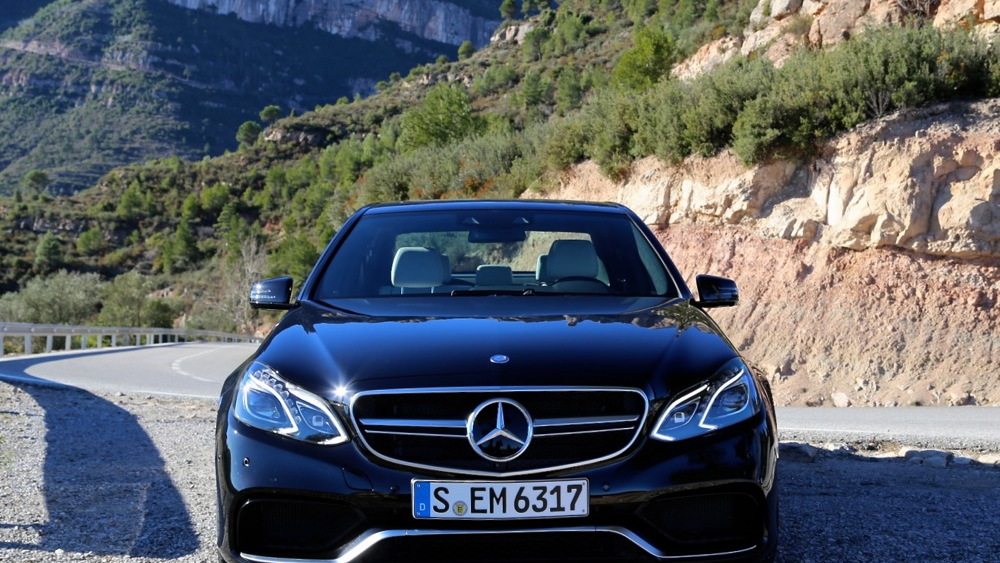 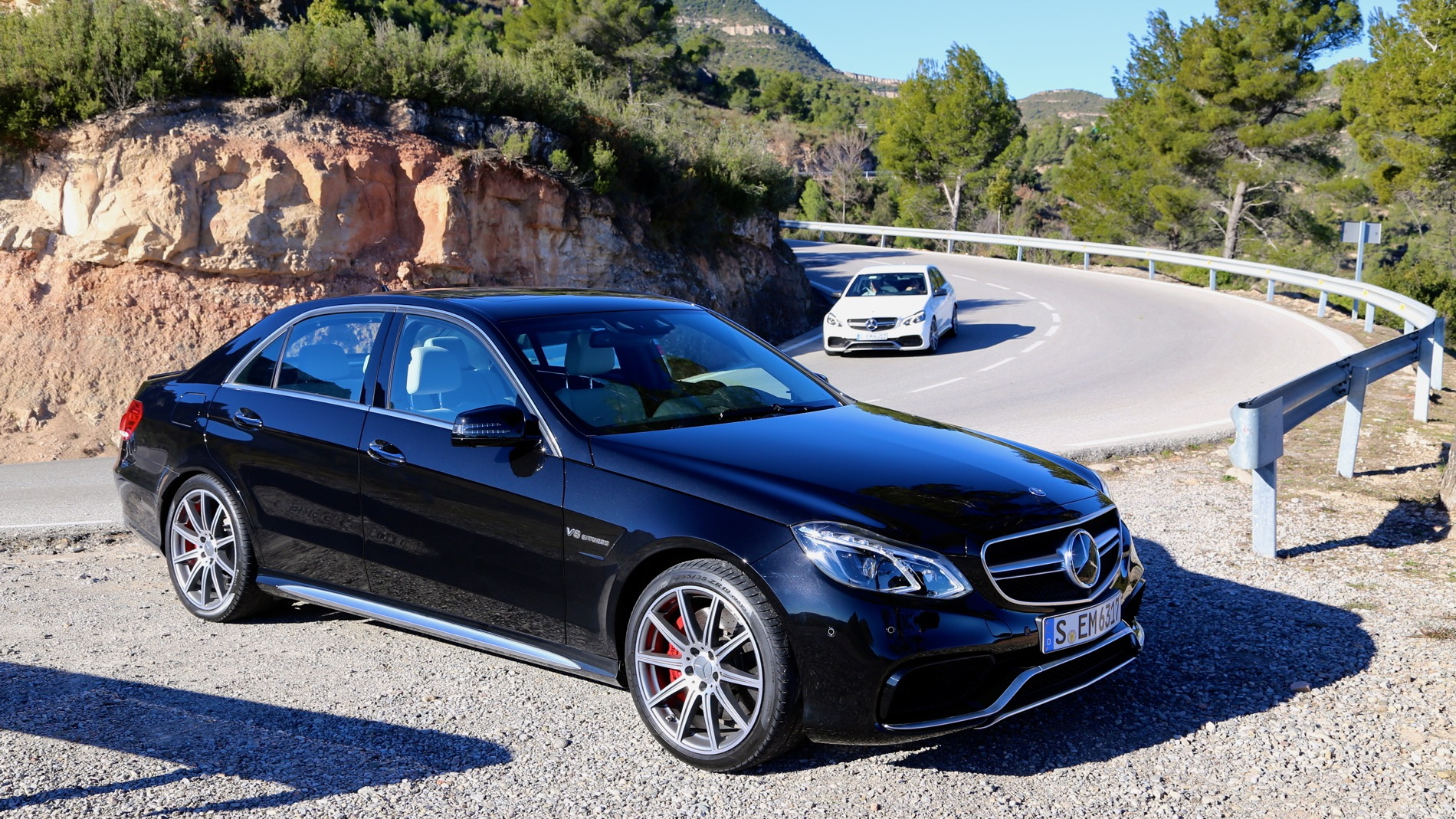 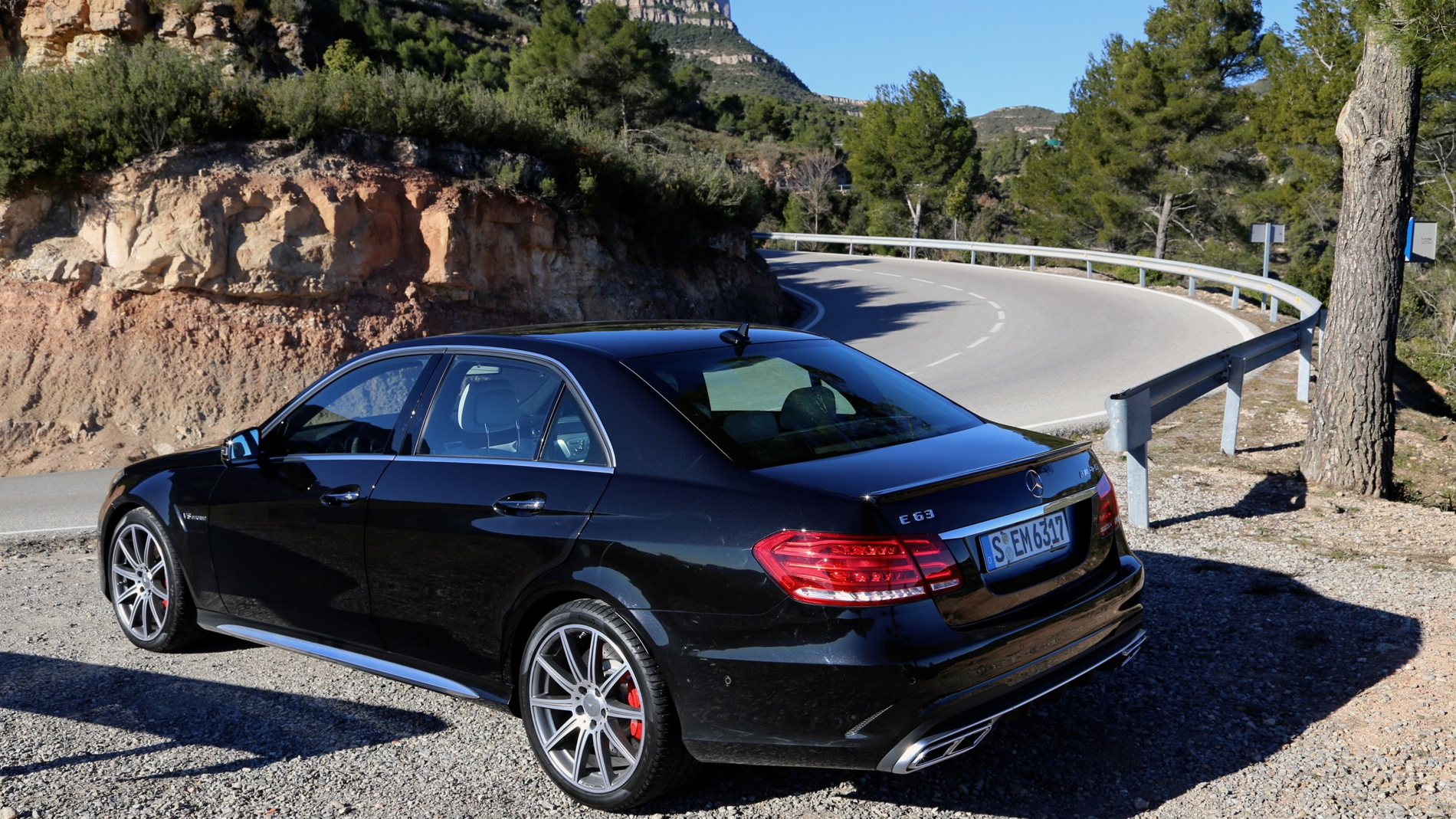 Construction workers working to the left, Ferrari dealer to the right. Real, actual bustle. Barcelona does not act like the rest of Spain, which is probably why it has two cell phones and is maybe "going out with the girls" on Friday night.

Just a few hours earlier, we'd been wedged in the fab city's underbelly, parked below ground level opposite Casa Battlo, the fab apartment building rendered edibly by Antonin Gaudi in melted stucco, so that no stock Pella window would fit. One by one, we woke up a fleet of 2014 Mercedes-Benz E63 AMGs one by one, wagons, sedans, oops that's a SEAT, and blew off some morning cobwebs that had caught some of us up too early after being up too late.

And then about five hours later, we were detained. Not that kind of detained--the other kind. With handcuffs.

Let's just say we're not 100 percent against the idea, but at the day's start, this is not how we were supposed to roll.

The way in which we were to roll was to go like this: blast down Las Ramblas, hit a main artery, ride the spurt out to the Catalan hills northeast of town, to an awesomely drawn stretch on an unfamiliar map that could have doubled for Latigo Canyon Road. On the navigation system, it was Muntanya Montserrat, and quickly we figured out every country must have one, since the last Montserrat we visited currently sits under a dozen feet of volcanic ash. This also was not in the plan.

Good thing that about three-quarters of the real plan came through before we descended out of Montserrat's piney better-than-California-ness. (San Diego--you've been warned.) It'd be the only shot we had at shoving this E63 AMG sedan around steeply inclined, frequently elbowed roads without so many officials in the mix.

And the E63 AMG requires a fresh set of hands and hocks this year, because it's changed once more--thrice now if you're using that word, and counting all the times since the E-Class was completely new in 2010. Every other E-Class is eking out fuel-economy gains wherever it can--the diesels are dropping cylinders, the V-8s are tapping out for twin-turbo sixes. The AMGs are content to sail by with a curt little wave. Tschuss! This year, they're up from 518 hp to 550 hp and 531 pound-feet of torque in base form, and if you spec up to the "S" model--a new sub-sub-model in the hierarchy--you'll net out at 577 hp, 590 lb-ft of torque.

Oh, that engine. The 5.5-liter, twin-turbo V-8 might always be seen and heard as the pale successor to SLS' 6.2-liter V-8--the one that energetically whomp-bomp-aloo-bomps through tunnels while it drinks liters of 93 blend. We think it's an unintentional parody of Little Richard's perfect day. That's cheating the twin-turbo unit its due, though. The newer engine climbs a Matterhorn of torque from 1750 to 5000 rpm, feeling rich and sounding in top vocal form all its own, and less manic about, well, everything.

The seven-speed automatic that's permeated the AMG and Mercedes lineups is present and accounted for, with the usual comfort, sport, sport-plus, and manual modes. Stop/start is here too, and it's not the fig leaf you'd think, even if it starts the E63 AMG in second gear when the tranny's in comfort/economy mode and thwaps the drivetrain to life with a mini-riding crop. The EPA gives it some credibility for saving gas--all of which goes away when you remap things to any of the more adventurous modes. Here it's set to stun: start/stop is disabled, shifts speed up and get rev-matching on the downshift. The exhaust opens up like bronchioles on a good hit off an inhaler, and launch control comes online for perfect 0-whatever-mph runs.

That the E63 comes with all-wheel drive as standard equipment this year, is a mild controversy among the AMG crowd. The third AMG to get all-wheel traction after ML and CLS, the E63 AMG has a torque split of 33:67. You can give it the slip--but the E63 AMG S gets a limited-slip differential to avoid just that potential for uneven wheelspin. Plus it also gets lovely red brake calipers, and optional carbon-ceramic brakes that replace the 14.2-inch vented and drilled discs that otherwise hide behind the E63's 19-inch wheels.

Finally, when it comes to describing what the E63 looks like without its overgarments, there's an adaptive suspension poised for Montserrat's loopy landscape with comfort, sport, or sport-plus modes. It's not a fully adaptive setup--AMGs carry steel suspension bits in front with conventional shocks, it's the back that gets air springs--and as a result, on purpose, the E63's never going to be as soft as a base E-Class. Or as quiet. The firm thump of the tires comes to life through the steering wheel with the barest of nudges--the electric steering rack builds up plenty of its own resistance a few millimeters off center--and the cabin's always filled with the ripe, mature sound of a big V-8 barking out orders like it's in charge. That's life with an AMG. Either you're in, or you're out.

You don't go halfway with the E63 in anything. It's a big sedan--bigger than ever, heavier than ever--and all-wheel-drive and electric steering have put more lead in its sled, more perceptually than physically (the AWD setup adds only about 150 pounds.) The E-Class' long wheelbase and the weight dialed into the steering, even in the lightest setting, aren't neutralized entirely by the rear torque bias. Carving up Latigo--sorry, Montserrat's canyon road--can be a task, even with a brake clamping on an inside rear wheel, vectoring it in more closely to the corner. It's just grown into a massively powerful, unbelievably stable machine that's serene and unflappable through 30-mph sweeps, and a real maul on 15-mph door-scrapers. Flip the paddles low once you're in manual-shift mode and you'll be able to slide your way out with brute force. In any other driving scenario, just open it up. It'll suture itself back to the ground, one way or the other.

All E-Class sedans are being refangled this year, and the de-furrowing of the brow makes all versions look happier about being alpha males. The AMG Es have emphatic ribs of chrome across the grille, big air intakes in the Porsche size class, and LEDs by the bushel. We don't get all the trick lighting features, but at max lumens, the AMG lenses count 29 LEDs in each taillamp and 17 in each headlight. The LED wars are so on--though the 164 LEDs in the Dodge Charger's taillights are probably safe for now, on a taste level alone.

Inside the E63, the rings of chrome and layers of Nappa leather give better depth to the stock E-Class interior. A flat-bottom steering wheel and a polished analog clock send different vibes but the same signal; S versions can have contrast-grey piping and Alcantara trim on the wheel. Common to them all, a nice, round, 200-mph speedometer.


Almost everywhere in the cabin, the same attention to detail seems like overkill at first, then makes sense after a flat-out cruise. Adaptive seats--there's a gimmick, right? We thought the same until we squeezed into their pneumatic leather corsets, bladders (theirs) inflating and deflating to bolster us through the corner. The $6,400 Bang & Olufsen sound system is more than 5 percent of the car's base price, but the pillar-mounted tweeter is a beautiful piece of industrial design--and it's just one of 14 speakers rendering 1200 watts of sound like so much aural bacon fat in a pan.

The E63 AMG is about $92,000 even before you opt for that B&O, or the carbon-fiber trim for the fascia and sills, mirror housing, engine or the interior--or the black-chrome option. Then there's a host of safety systems that look like a Department of Defense tag sale: long-range radar with stereo cameras, night vision, ultrasonic sensors can steer the E63 away from oncoming cars at speeds of up to 120 mph.

We know all this because we sat through demonstrations and talked with experts, and had time to mull it over while we were detained. So you want the story, right? Apparently, one E63 AMG blazing by is ok. Two are a nuisance. Eight to ten are on final approach for a barge across the Mediterranean to God only knows where. The entire brigade of AMGs got pulled over for almost two hours--none clocked for speed, or for infractures, but all for driving without an international license. A cool $800,000 fleet of exquisite German hardware, cooling its jets over a worthless piece of paper issued not by the U.S. government, but by AAA.

While papers were exchanged, and discussed, and exchanged, and discussed, the rationale for the latest edition of the E63 AMG made perfect sense. AMG has 20 models today, and wants to grow to 30 models; it sold 20,000 vehicles in 2011 and wants to grow to more than 30,000. The roadmap to get there includes more S models--take that, Audi--and in the U.S., more AWD AMGs.

All-wheel drive puts Mercedes in the game where they count--in the Northeast, a longtime stronghold, a place where the prospect of a rear-drive, 577-horsepower E63 AMG sounds about as appealing as the 40 inches of snow dumped on Connecticut while we're enjoying a brisk Barcelona breeze, brought to us by six different varieties of local law enforcement.

Weren't we worried? About what? Losing the battle of bureaucracies? By the end of hour one, I was betting we'd see an independent Catalonia before all the conflicting agencies realized Americans were, as usual, more of a hassle than they were worth.

Two, we weren't really all that far from the border. And could one black Peugeot hatchback really keep up with a 186-mph fleet of AMGs, given a lucky break in the action?