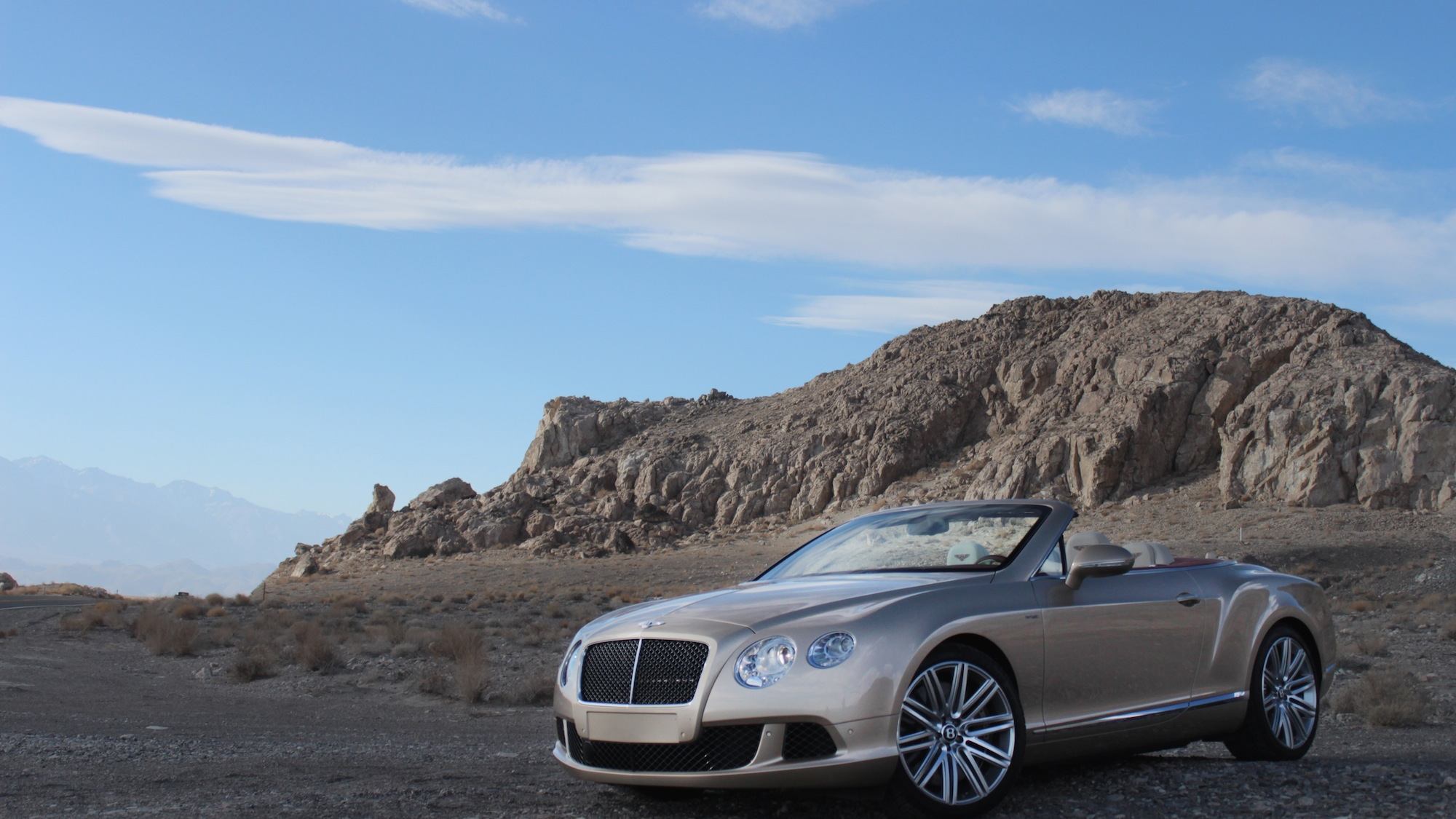 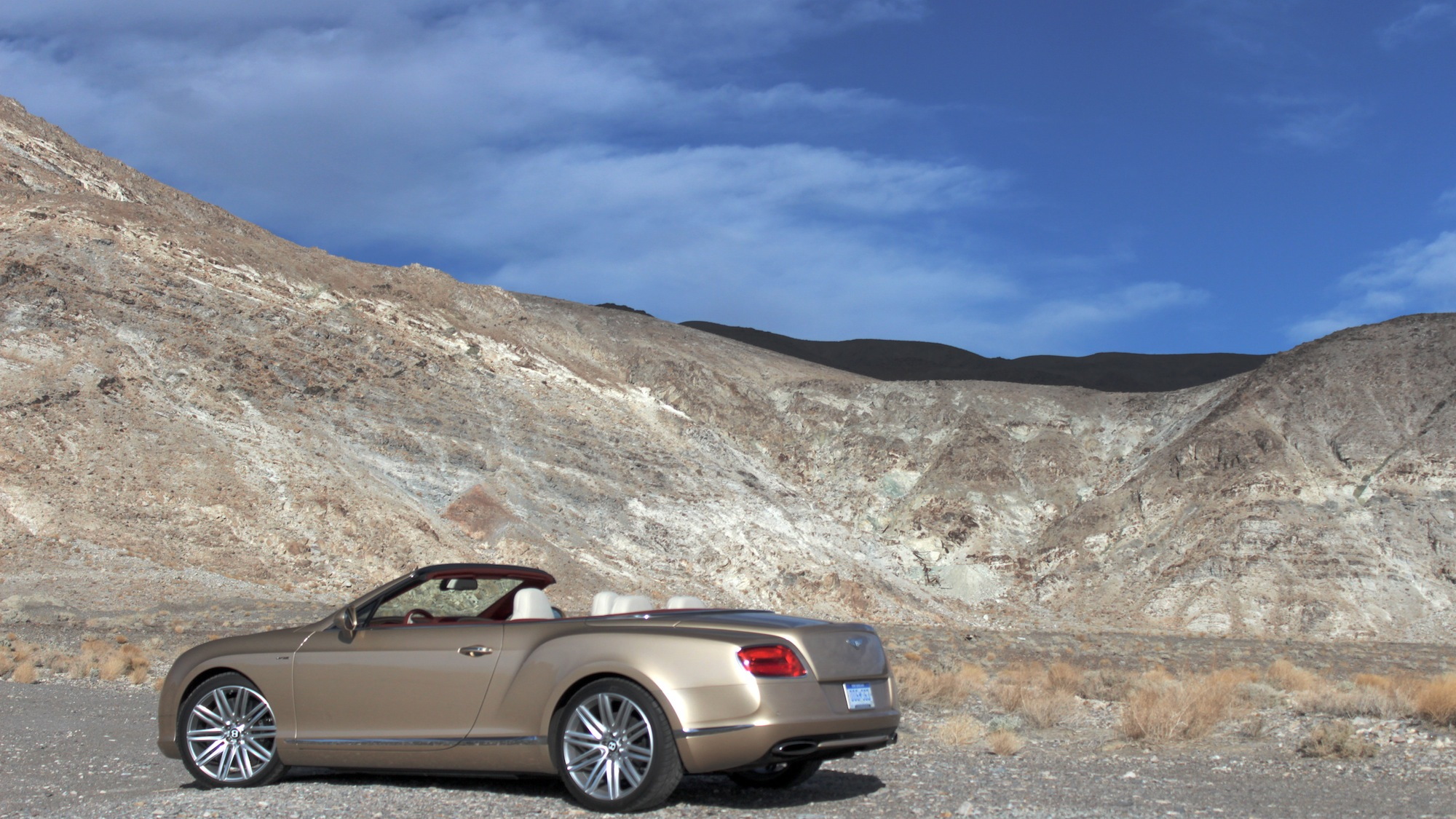 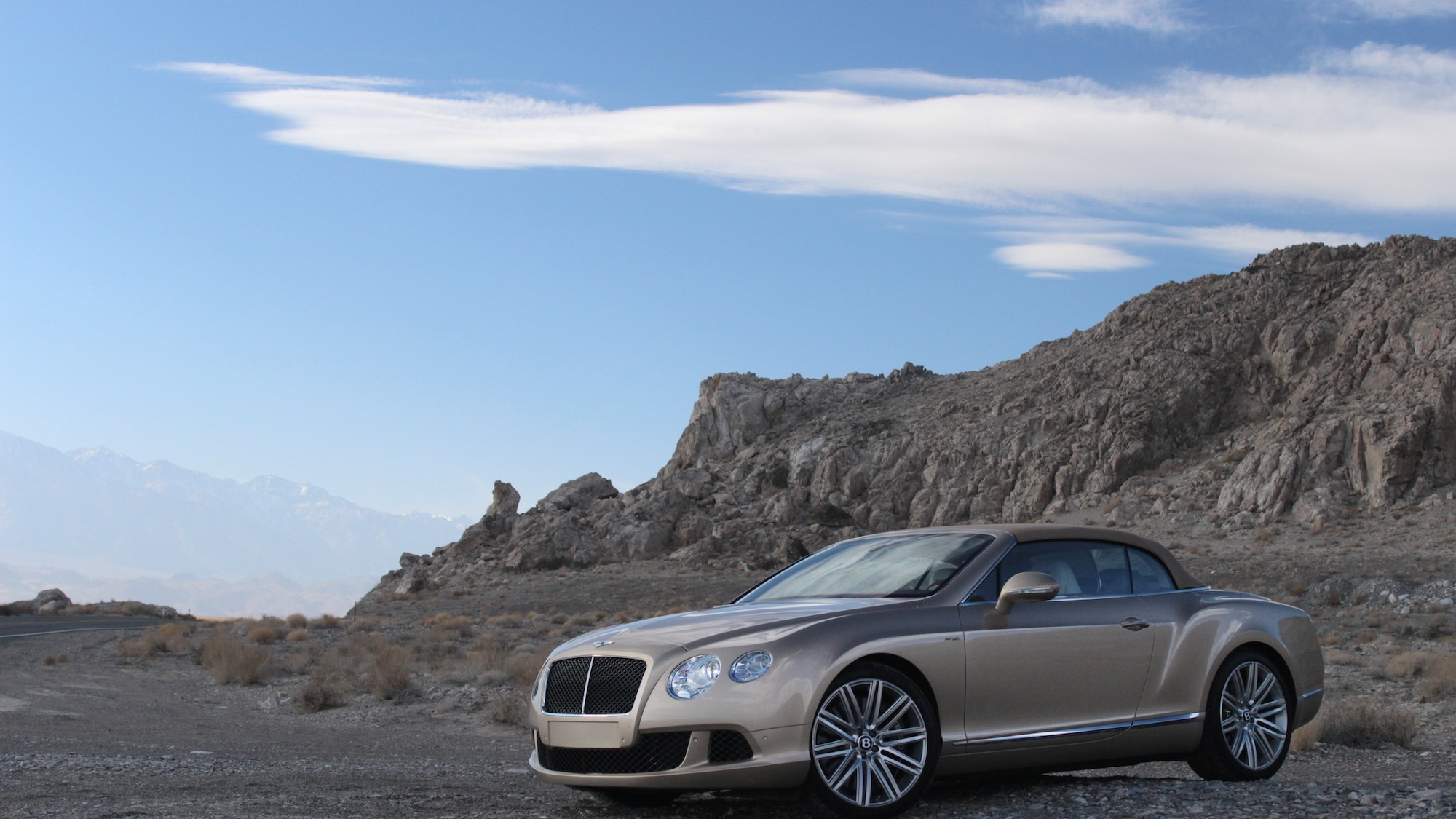 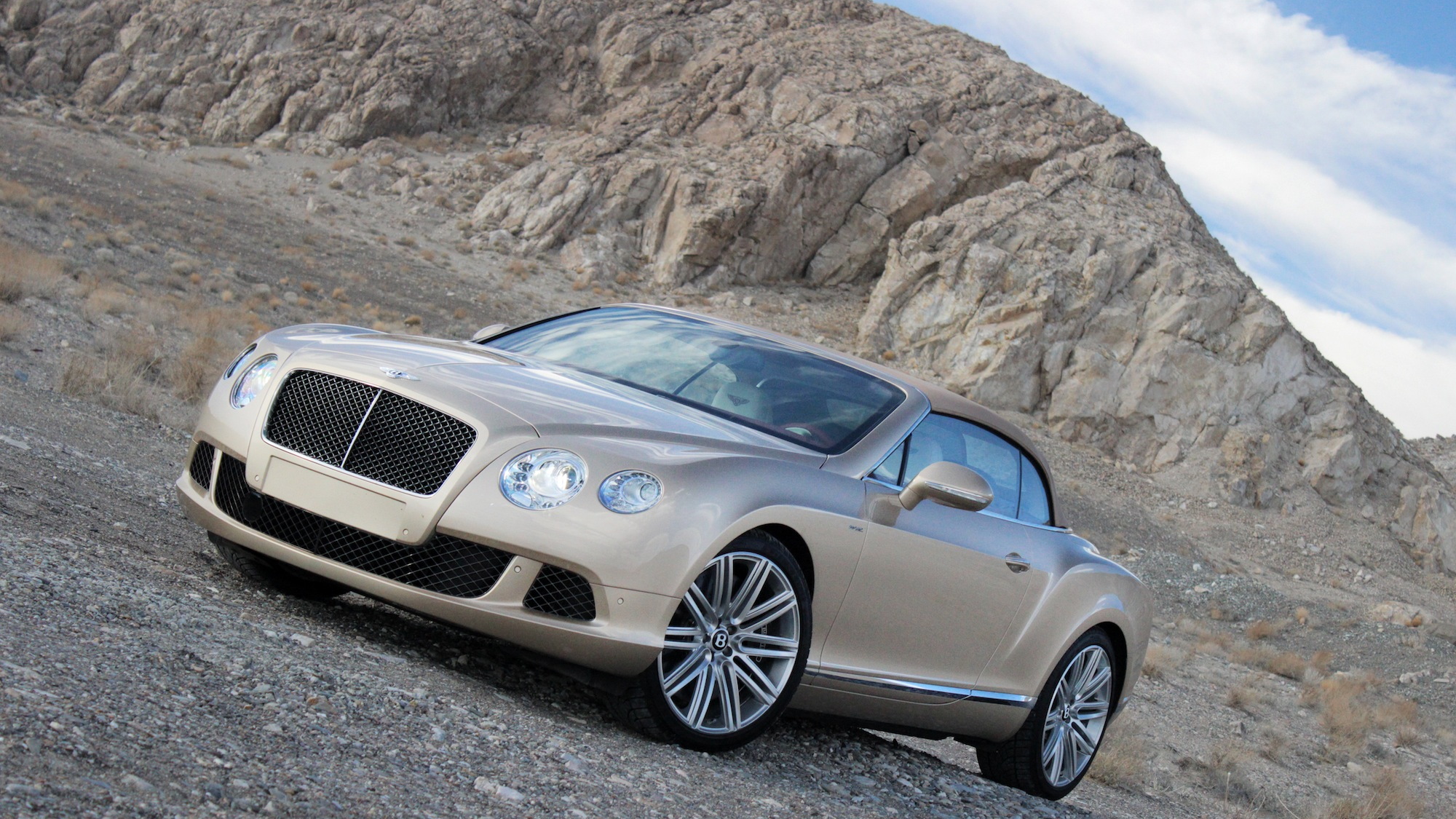 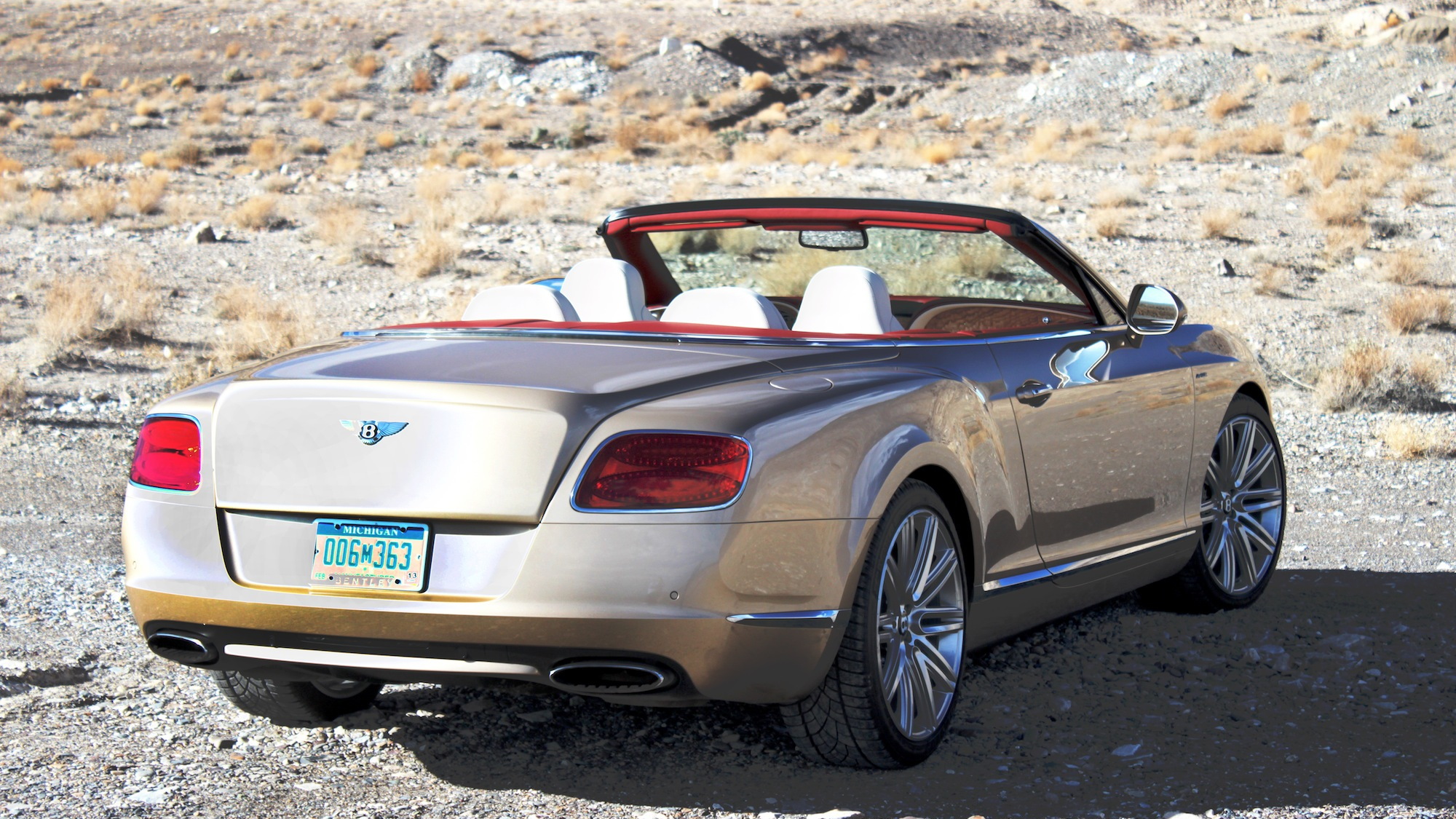 34
photos
If you have to ask why anyone would spend $250,000 or so on a two-plus-two convertible, you probably don't even need to hear the answer; it simply won't make sense to you. If, however, you can get over the sticker shock, you'll find what is almost certainly the best drop-top grand tourer in existence: the 2013 Bentley Continental GT Speed Convertible.

First things first: the stats. A twin-turbo 6.0-liter W-12 engine sits up front, sending 616 horsepower and 590 pound-feet of torque to all four wheels (in a proper 40/60 front/rear split, though the car can send up to 368 pound-feet of torque to any individual axle). Curb weight tips in at just over 5,500 pounds--about the same as a Cadillac Escalade, and about 385 pounds heavier than the GT Speed coupe. Top speed is 202 mph, and despite the weight, the GT Speed Convertible will hit 60 mph in 4.1 seconds, and 100 mph in just 9.7 seconds. Gas mileage is about 12 mpg city and 20 mpg highway for a combined rating of 15 mpg.

What none of this tells you is how utterly excellent the Continental GT Speed Convertible is off the spec sheet. In the real world, where roads are wide-open and arrow-straight, curvy and cambered, or even treacherously snowy and icy, the GT Speed Convertible is simply unflappable. You don't just feel like you command the road and the environment behind the wheel of this super-tourer--you actually do.

That sense of command of the elements isn't just external, however. With Bentley's windscreen in place over the rear seats (sorry, no wind-free open-top touring for four), the neck-level seat heating vents wide open, and the seat heaters turned on, even freezing temperatures are tolerable with the top down, at speed. You might want to pack some gloves though, as the steering wheel--at least on our well-kitted example--isn't heated.  If you'd rather skip the cold-weather preparation, however, just glide the electrically-operated soft top into place and enjoy the quiet and comfort of a coupe.

On our two-day tour from Las Vegas to Lake Tahoe and then on to San Francisco, we encountered the full run of four-season weather: warm, sunny desert, cool and clear high mountain roads, cold and rainy forests, and even an extended stretch of nearly blizzard-level ice and snow. In fact, the snowy section of Highway 50 we crossed was so slick the California Highway Patrol had shut the entire highway down as we came down out of the mountains.

So how, exactly, does a 616-horsepower convertible make it through conditions that saw dozens of SUVs, crossovers, and even 4x4 pickup trucks slide off into the ditch? For starters, a properly chosen set of Dunlop Wintersport tires. Bentley's proven all-wheel drive system and judicious use of the throttle and brake were the only other ingredients in an unflustered and uneventful drive down and out of the snow-covered Sierras. The whole package was so stable and controllable as to make it easy--truly impressive considering the car's rather oppositely-oriented design parameters.

Of course, things would not have been so simple and straightforward had the GT Speed Convertible been shod in its standard-issue Pirelli P Zero high-performance summer tires. In fact, the trip would have been downright impossible. But the Bentley Boy Scouts took the proper preparations, as we'd hope any informed owner would do, and it all worked out just fine.

Line up the wheel, slam the throttle home, and let the eight-speed gearbox click off the changes, and the GT Speed Convertible is a veritable land-bound rocketship. Even with the top down, wind disturbance is minimal until you pass legal highway speeds, and only mildly dusturbing as you go beyond triple digits. At a 60 mph cruise, you don't even have to raise your voice to hold a conversation.

But why let the eight-speed ZF automatic handle the shifts? There are paddles right? There are, but they're a bit distant from the wheel, mounted on the steering column, and they're not terrifically engaging or instantaneous even when you do find them. Better to click up a couple degrees of the variable sport mode and let the electronics do the work.

As you advance in speed, the the already-lower-than-normal GT Speed Convertible's dynamic suspension takes you progressively lower still, hunkering down to get below the wind. It can also range from smooth and comfortable to firm and sporty, with a simple adjustment made through the large center-mounted screen.

Despite the sports car-like acceleration and supercar top speed, the GT Speed Convertible is quick to remind you it's a large, hefty grand tourer should you think about caning it through a tight set of curves. Neither the steering nor the suspension are happy to help you hustle its bulk at neck-straining lateral loads--but ease of the pace until the road opens into sweeping curves and long straights and the GT Speed Convertible devours pavement with a stability and eagerness that's hypnotizing. Just don't forget your radar detector--it's easy not to notice you're whipping along at 150 mph.

Unlike the vast majority of the $250,000-$400,000 cars we've driven, however, the GT Speed Convertible is actually, well, useful. Far from being an avant garde take on design or luxury, the GT Speed Convertible is, ultimately, a very, very fast daily driver. The interior, though beautifully turned out and phenomenally well-made, is functional and straightforward--for the most part.

The interior even exudes a sense of durability--something that definitely cannot be said for most of the rest of the hyper-luxury segment, particularly in a certain independent English brand's products--with panels perfectly formed and precisely fitted, nary a squeak or rattle to be heard.

Our one beef with the GT Speed Convertible's daily utility is the infotainment system: it's laggy, a bit confusing at times in its menu structure, and, curiously, not seemingly integrated between the main center stack screen and the smaller one in front of the driver. That smaller screen is also controlled by one of the most obtuse button interfaces ever devised, let alone placed on a steering wheel, requiring a bit of a learning curve, and even once learned, some thumb gymnastics to properly actuate.

To Bentley's credit, it acknowledges the deficiencies in the infotainment system, and has plans for a much-improved system in the future. For now, however, one must simply persevere.

Epic in the truest, least-overused sense of the word

After six-hundred-plus miles and two epic days of travel behind the wheel of the 2013 Bentley Continental GT Speed Convertible, we found ourselves surprised that it's not just opulent, capable, and gorgeous, but truly functional. The combination is intoxicating.

It's enough to make even a mere mortal contemplate trading a home mortgage for a garage space and a sleeping bag. Anyone have a spare sleeping bag?