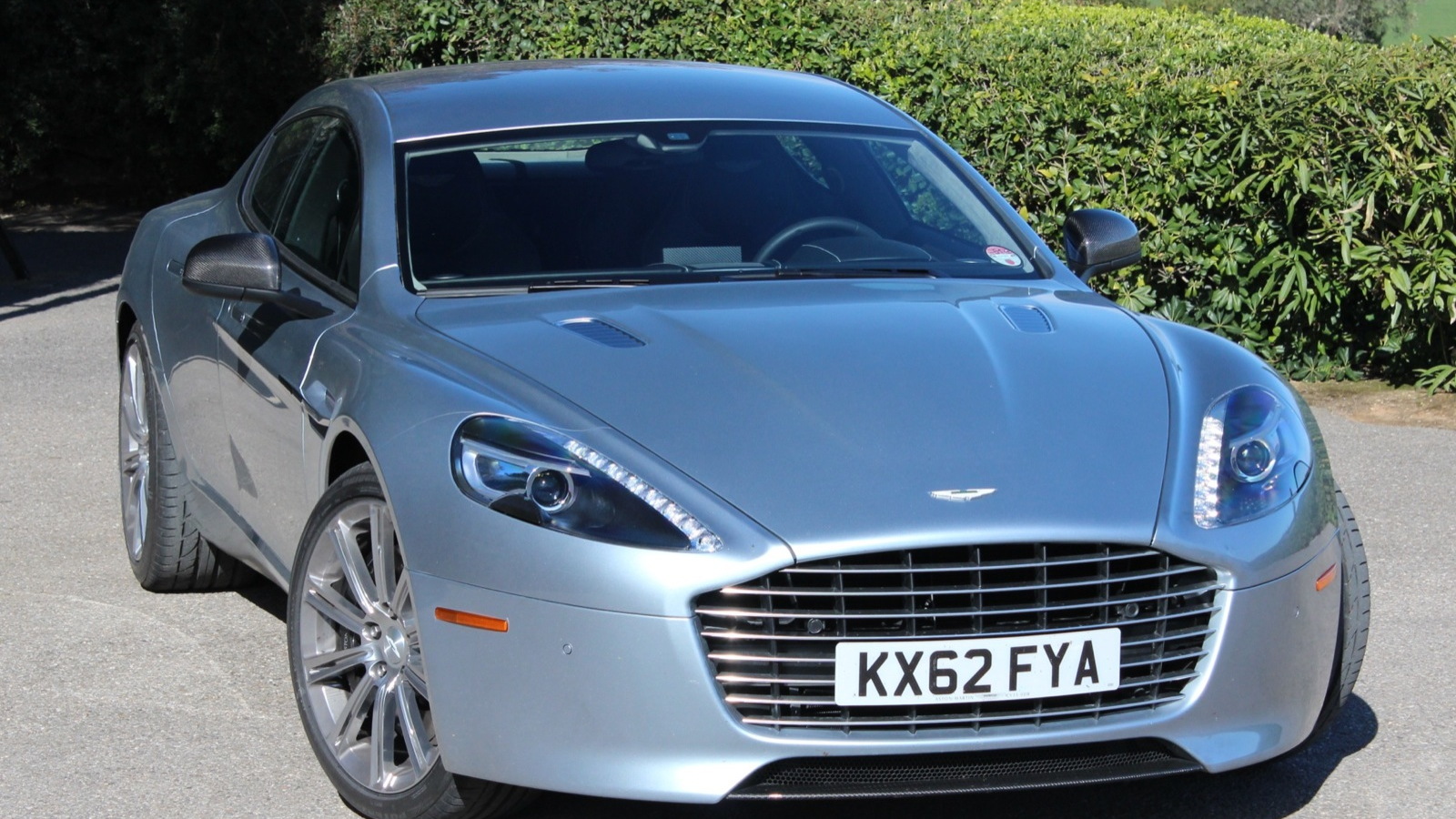 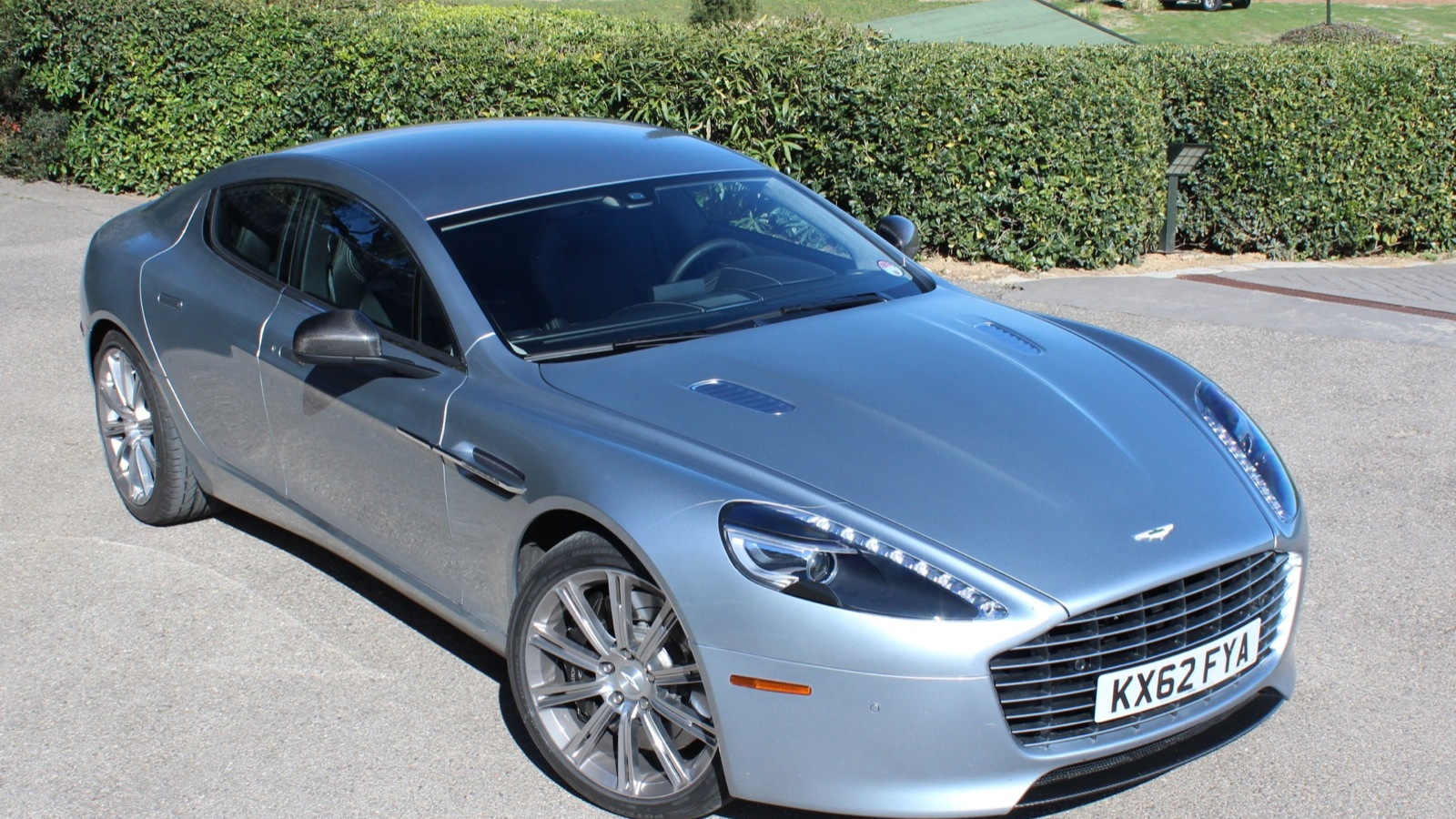 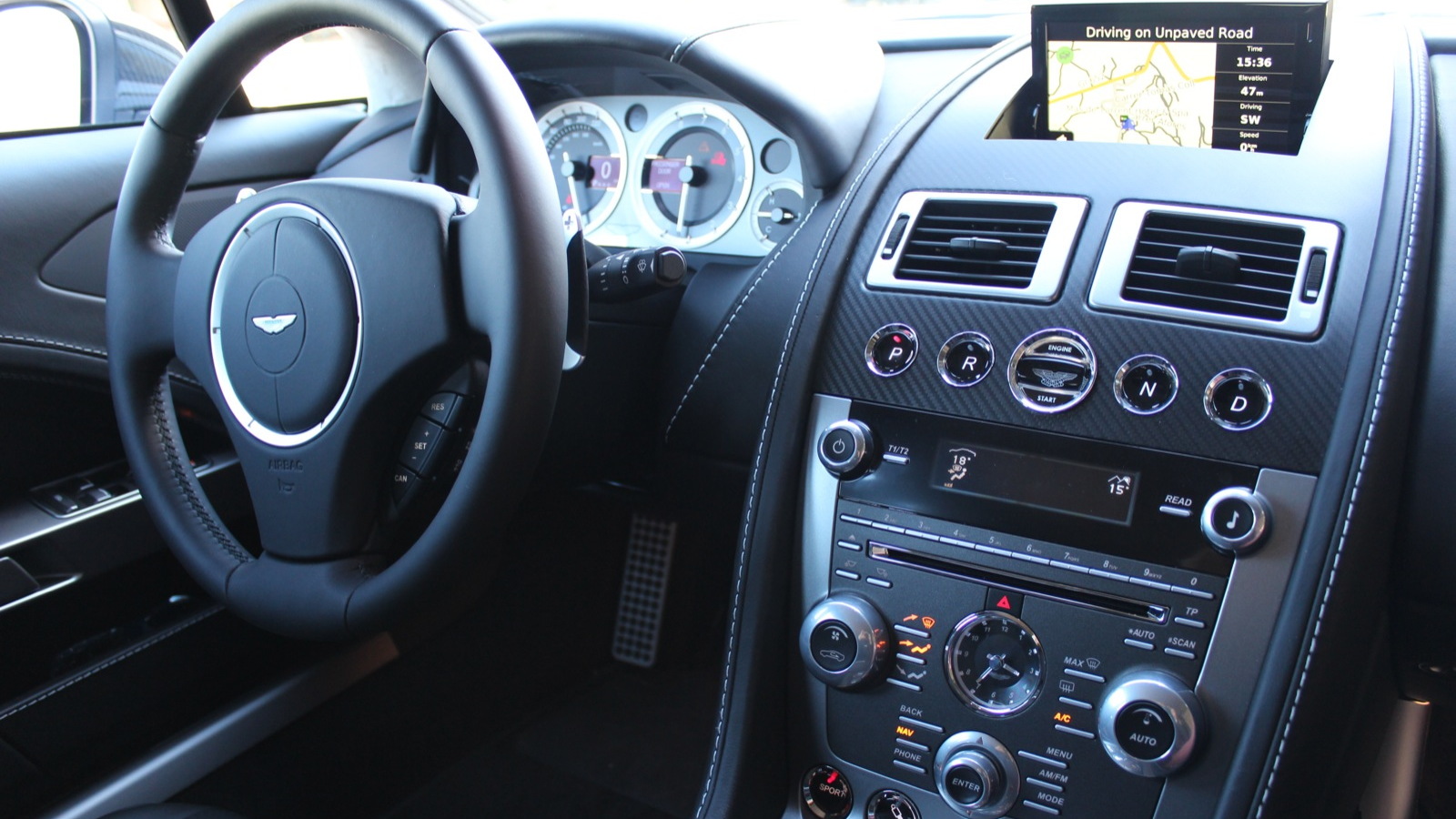 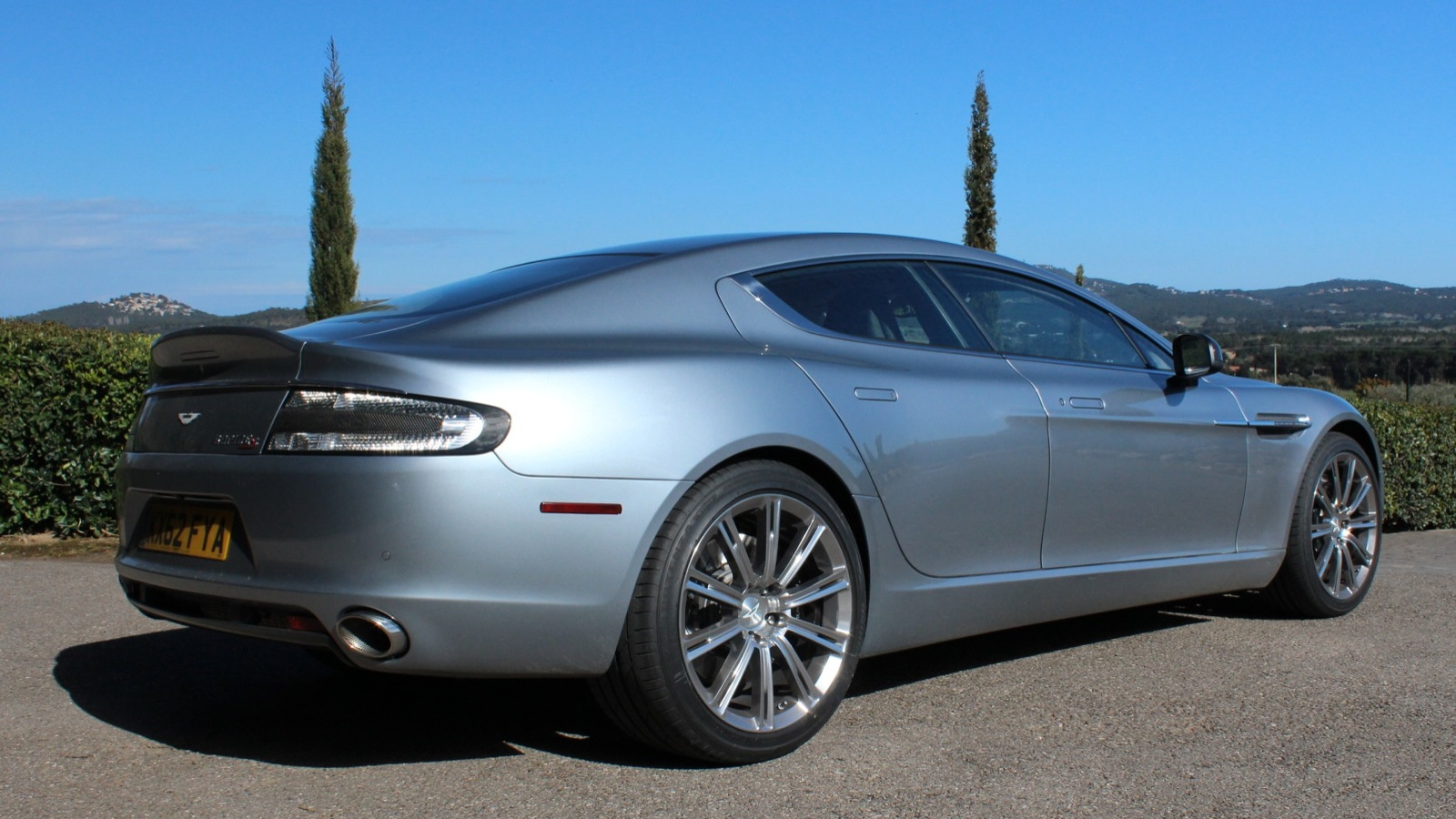 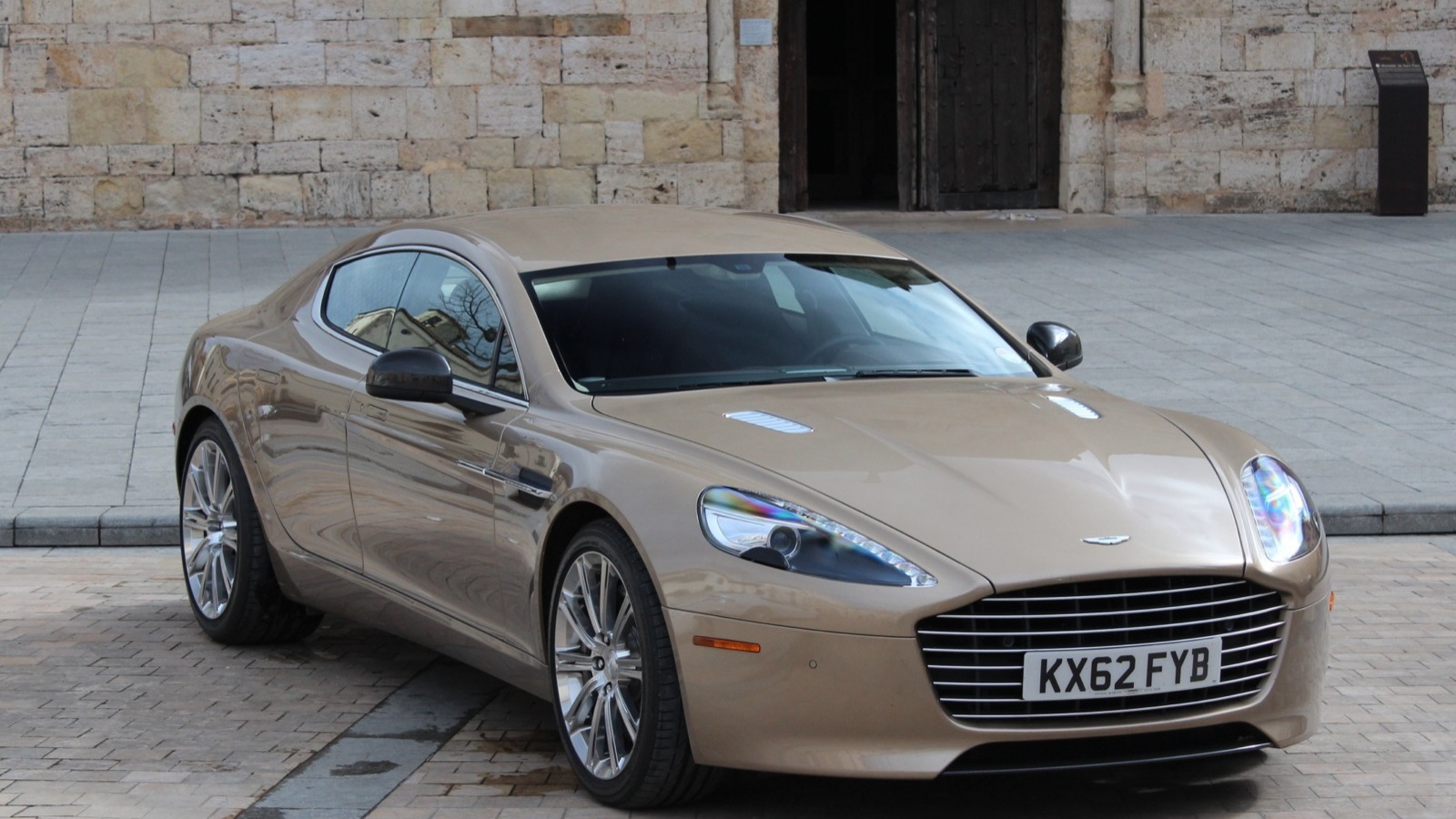 Can a four-door be a true sports car? In today’s market—even at the upper end of the market—it seems that there are too many so-called ’no compromise’ luxury cars looking to be so many things at once. With its curvy, performance, car roofline rather intimate 2+2 layout, you might of course wonder, is the new 2014 Aston Martin Rapide S one of those?

Absolutely not. With the new Rapide S replacing the Rapide for 2014, adding 80 horsepower, technical improvements, and a new face, the Rapide S promises (and delivers) a more athletic driving experience, and its primary mission is obvious: that of a grand-touring sports car primarily, with exclusivity, luxury, and all that is traditionally Aston following suit.

And in that tradition, a gentleman’s sports car is what it is. Upon pressing the ornate glass-crystal key/ignition button in the center of the dash, the big 5.9-liter V-12 (badged as a 6.0) fires up with a Bengal tiger’s roar and produces some spine-tingling cacophony when revved to its upper reaches. And there’s an ever-present edge reminding you that this is not just a tuned-up luxury sedan.

Yet this car’s a purring pussycat for everyday driving. There are no turbochargers, no direct injection, just the straightforwardness of a large-displacement engine, and that all gives this Aston the chops to outcharm models from Germany, England, and Italy that are faster by the numbers. It'll lumber along in sixth gear with the best of them, whether the cruising speed is 55 mph or 155 mph.

Stronger, faster—and with such charm

But what matters here is that the $200k Rapide S is closer to that “four-door sports car” ideal that company CEO Dr. Ulrich Bez still frequently mentions. It's considerably stronger and faster than its predecessor. Variable valve timing, a new intake manifold, a revised cylinder head, a stronger crank, and several other revisions altogether bring output on this AM11 engine up 80 horsepower from what it made in Rapide guise: 550 horsepower and 457 pound-feet. Aston places 0-60 times at 4.7 seconds—and a drag-limited top-speed of 190 mph—although again, the way this engine builds power all the way to the top makes it feel even quicker.

There’s no mother lode of advanced tech features; only enough to enforce that athleticism with a sheen of sophistication. The Bilstein adaptive damping system carries over from the Rapide, but it now has normal, sport, and track modes, while the electronic stability control has a separate track mode, as well as a full-off position.

A separate Sport mode engages a throttle mode with more aggressive tip-in, as well as a somewhat more aggressive shift strategy. Dip deep into the throttle and the six-speed automatic (ZF) transmission smacks through the gears in a way that’s damped just enough to feel luxurious yet direct enough to feel racing-influences. Nail it to the firewall and you’re pushed back in your seat in a seamless, luxurious way, as the powertrain delivers a throaty baritone engine note with an audible crackle at each shift.

Despite its ridiculously short 35-series sidewalls in front, the Rapide manages to damp most minor bumps and improve its composure down jittery backroads—a testament to the damper system. And the hydraulically boosted power steering is tuned for a firm, communicative feel that puts most modern luxury-performance sedans to shame.

Handling and poise to savor... but leave the parking and maneuvering to others

It's not an easy car to park or maneuver in tight spaces. At nearly 198 inches long, the Rapide S is a bit longer than U.S. mid-size cars. However its cabin feels decidedly compact. Yes, it has four doors, but getting into or out of that rearmost position involves squeezing, stretching, and contorting—even for average-height adults.

Yet with just a short time driving and really getting to know the Rapide, all of this is quickly forgiven.

The Rapide S weighs about 4,400 pounds, but you’d never know it given the way it can hold the road fast and close, when switchbacks and esses become a sort of dance, as they did on roads that skirted the Pyrenees. This is an exceptionally wide car (84 inches)—and you feel that on narrow country lanes—but from the cabin and driver’s seat it drives small and you can place it very precisely. There are no multi-mode settings for the steering, which has a surprisingly quick ratio, but it always feels right for the personality of the car.

A wider, more bulbous face is part of the Rapide S improvements, as well as a refined hoodline and frontal bodywork, but even these changes aren’t completely cosmetic. Designed so that the car can meet comprehensive EU pedestrian-impact regulations, the Rapide S has a slightly different hood curvature (Aston’s actually dropped the engine more than a half-inch to accommodate that, which helps dynamically by lowering the center of mass). And those changes left space for a new cross-brace system across the top of the engine—further stiffening the structure and improving handling. Further aiding aerodynamics is a larger, lipped rear spoiler.

The Rapide is built on the same VH platform, with a bonded-and-riveted structure, that now underpins everything in its lineup—“albeit with varying degrees of V and H,” as a company official put it. Body panels remain a mix of steel and aluminum. And with the S, Aston Martin has gone through the car and made all sorts of structural and chassis refinements.

Beautiful inside, and a little quixotic

Flush door handles require you to press on one end to flip out the lever, then pull; it’s not a practical setup but one that looks good on the outside. The frameless doors then unlatch with a light zip, coordinated with a tuck-down of the windows, and then swing outward and upward, with a uniformly damped, fluid motion that lets you easily stop at any partial point. You get into one of those front seats, and comfortable yet firm racing style seats practically envelop you.

Those two back positions involve some ducking to get into and may prove even tougher to get out of—we'd draw the line well under six-footers, by the way. And in back, the long hatch opens to enough space to stow, on a cargo floor that's not fully flat but has a pop-up divider where it changes levels.

By modern-car standards, the Rapide’s instrument panel feels a little unfocused, and depending on your outlook it may feel either charming or frustrating. You shift from Park to Drive, Reverse, and such with large elevator-style buttons across the dash, which takes some getting used to. And while the navigation system has a beautiful, high-contrast screen, making selections involves looking down to the list of buttons first, to press one (‘nav,’ for instance) before you rotate through the menu. Switchgear feels good, on the other hand, and fit and finish are far better than in Astons of the not-so-distant past.

’Bespoke’ has come to describe a certain class of cars—models that are typically custom-ordered. Especially in the U.S., where luxury cars are most often selected from what’s in the showroom, that philosophy separates Aston Martin from some of the more mainstream luxury brands like Mercedes-Benz or even Porsche. Aston officials seemed just as opinionated as their customers when asked what they would or wouldn’t order in a personal car—although their own personal taste has no relation to where they draw the line aesthetically in a vehicle.

With four doors, the closest to a true sports car

For the driver and front passenger, if not those wedged in back, this is a car that can provide spine-tingling thrills charging up mountain passes and along canyons, the confidence and stability for extended left-lane duty on high-speed motorways, or plush, surprisingly sedate cruising at American ‘cruise control’ speeds.

While the Porsche Panamera is more of a brute, and the CLS63 AMG is about as athletic, at a lower price albeit in a more ‘common’ wrapper. Meanwhile, the closest rivals are the Bentley Flying Spur and Maserati Quattroporte—both vehicles that we haven't recently driven.

This is a car that’s classy and elegant when it’s not moving; then extroverted and charming, from inside or out, when it is. And we're more than a bit envious of anyone with the deep pockets to afford one.