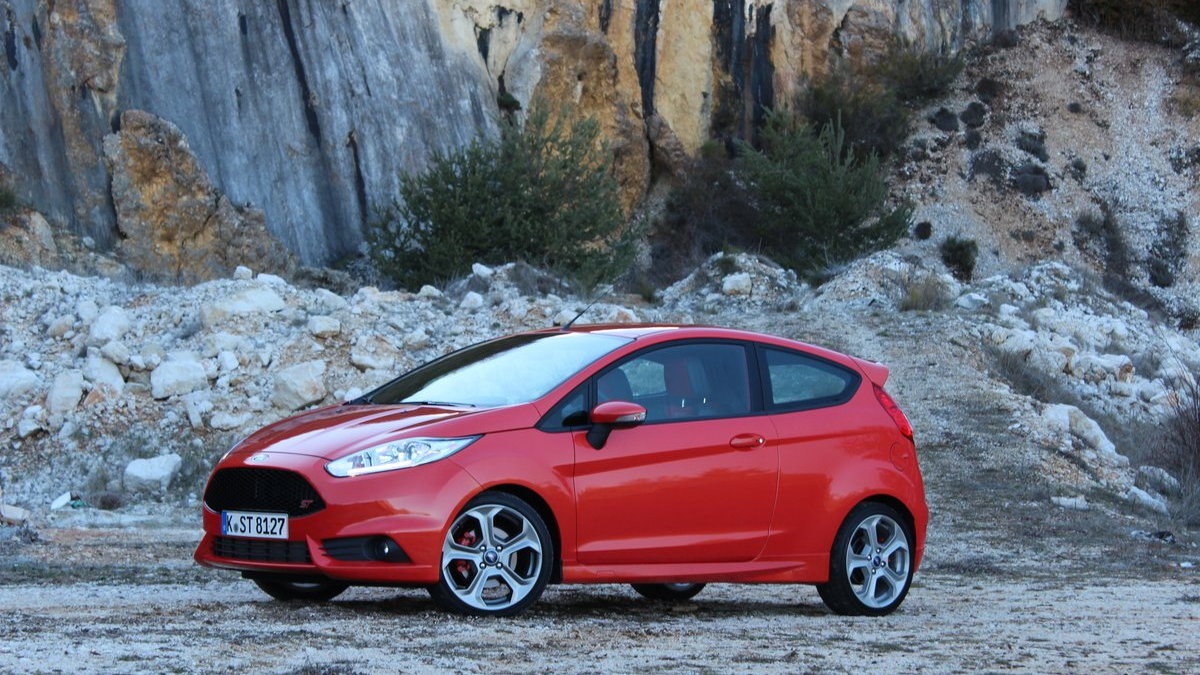 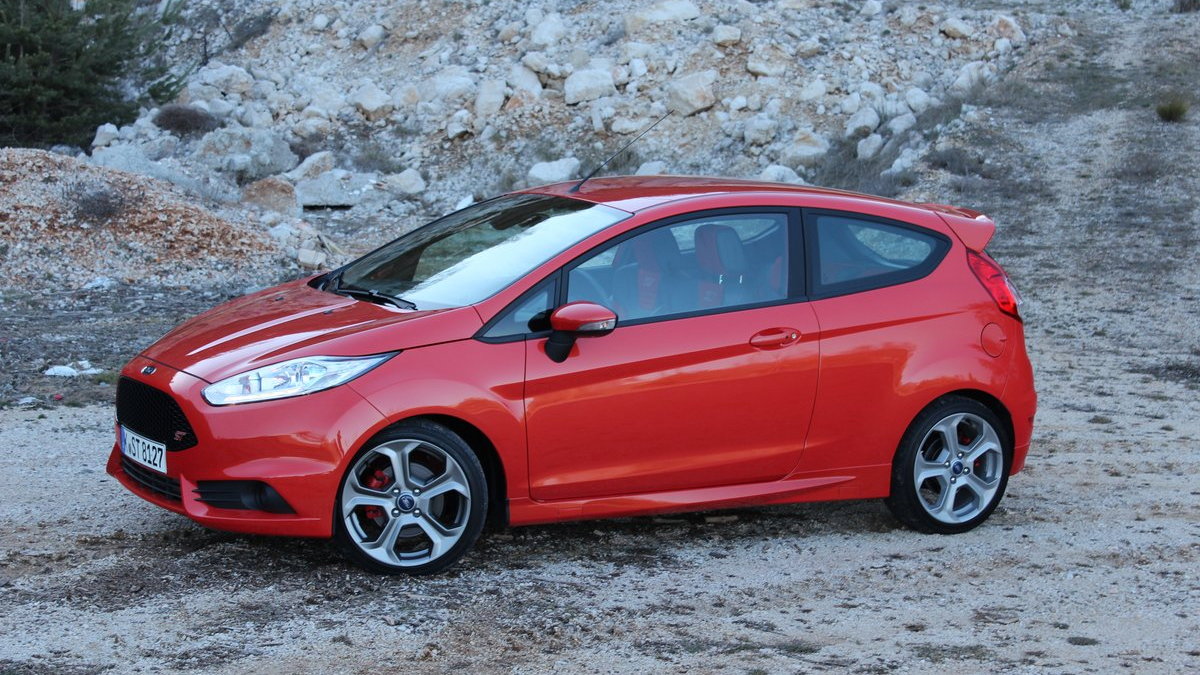 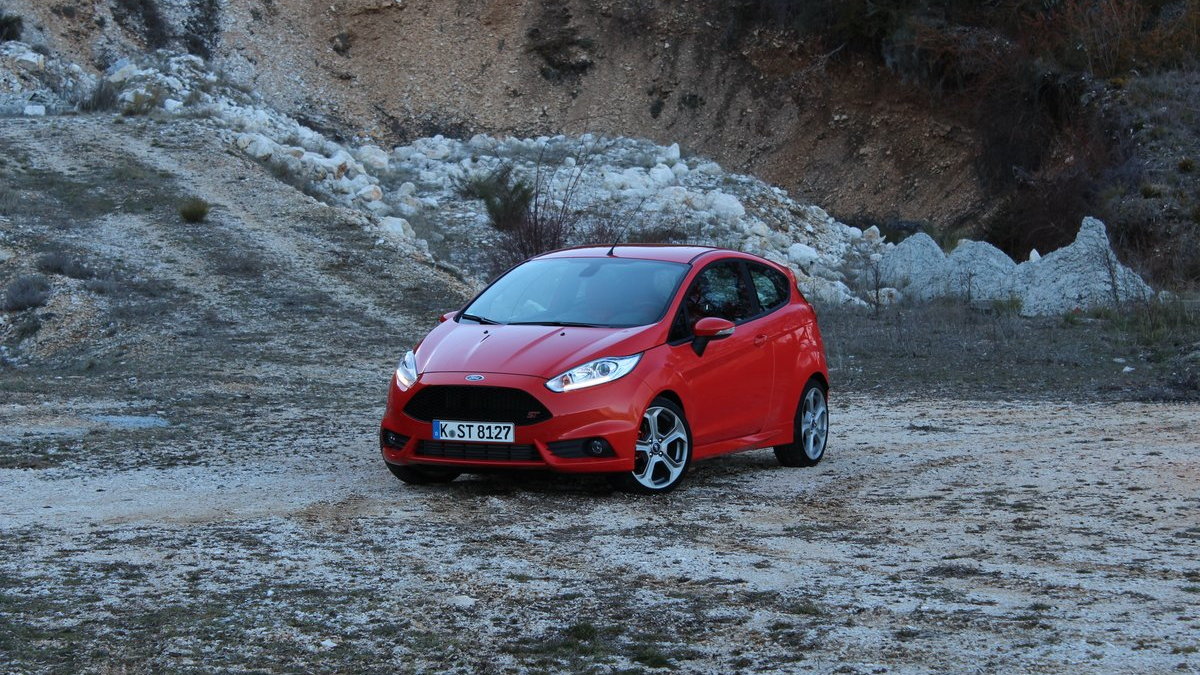 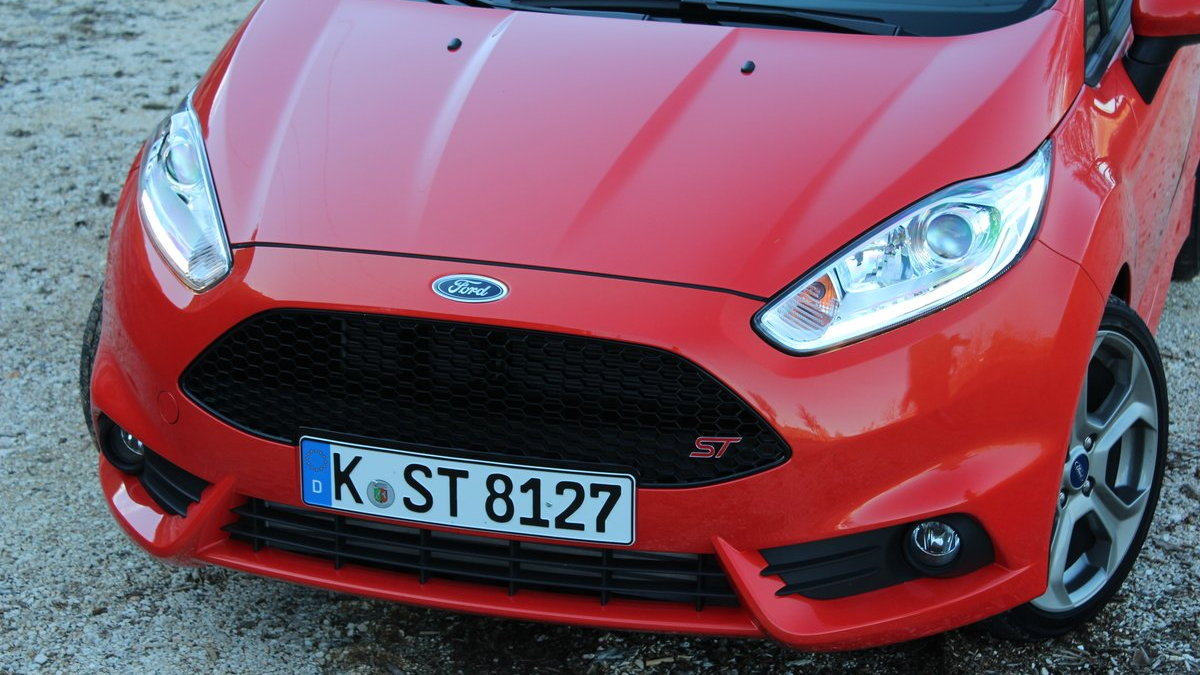 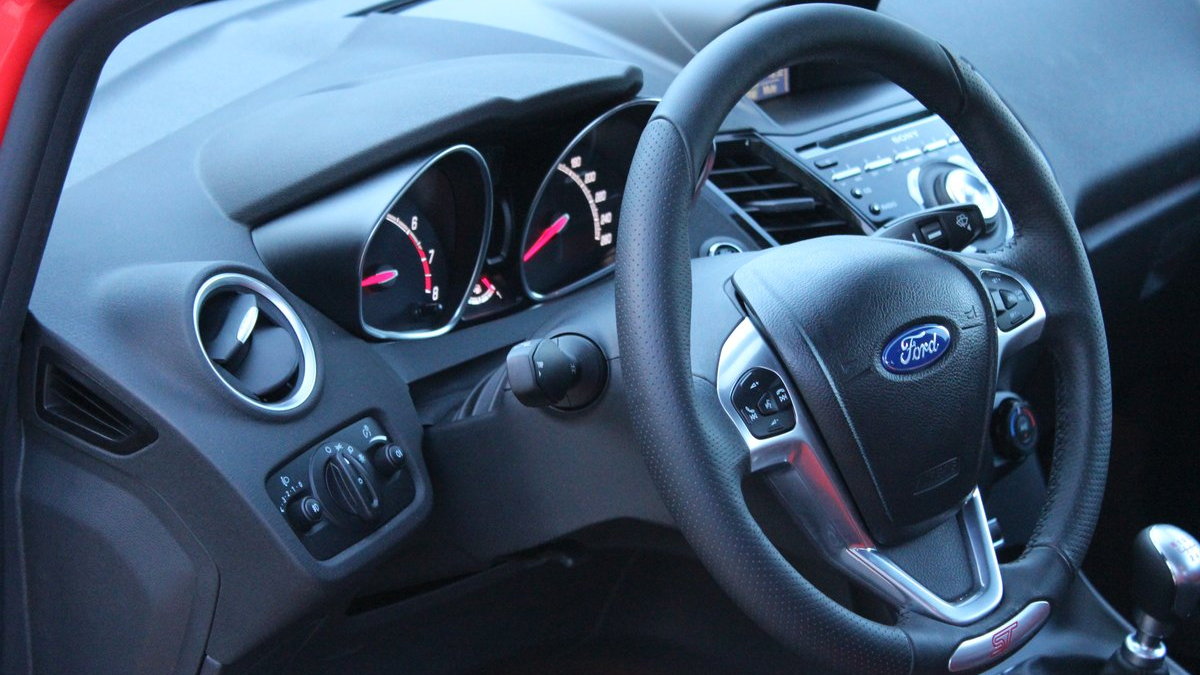 The idea of packing a very powerful engine into a very small car—especially a car originally designed with frugality in mind—isn’t by any means a new formula. It’s been done over and over again, over decades, to spice up lineups and add bragging rights. And while some transcendent models like the Volkswagen GTI, Honda Civic Si, and Mazdaspeed3 have rightly earned that halo over the years, we can think of plenty that were duds.

The Ford Focus ST has fast joined the ranks of those halo models—well-conceived in every way, and truly better than the sum of its parts. But now just below (or beside) the Focus ST slots a 2014 Ford Fiesta ST that somehow sets our hot-hatch heartbeat aflutter. Maybe more so than the Focus ST.

That’s right. The Fiesta ST has neither a such a boast-worthy power-to-weight ratio nor quite as many engineering tricks up its sleeve, but it ends up offering more seat-of-the-pants, go-fast thrills—enough to pull people away from the likes of the Fiat 500 Abarth, MINI Cooper S, and Hyundai Veloster Turbo...and possibly even the larger Focus ST.

And here we were in mountainous Southern France—fittingly, tackling some of the same serious driving roads, like part of the Route Napoleon, that we did with the Focus ST nearly a year ago. As with the Focus ST, we were only there to get an advance drive—a taste—of this European-engineered little wonder, which is coming to the U.S. in just a few months.

First off, back to that familiar idea: The powerful engine is the new EcoBoost 1.6-liter, with turbocharging, direct injection, and variable valve timing—the same one that we’ve enjoyed in the mid-size Ford Fusion, TCC’s 2013 Best Car To Buy) and the Ford Escape.

In the Fiesta ST the engine makes 180 hp (two more than in the Fusion and Escape) and 177 pound-feet. Yet it makes a peak 197 hp (and 214 lb-ft) in 20-second bursts, thanks to a special overboost mode (making peak boost more than 21 psi, versus 20.3 otherwise. Simply back off the accelerator briefly, and you earn another 20 seconds.

The engine grumbles a bit below 1,300 rpm, but then just past 1,600 rpm hits its stride, churning out the torque all the way up to nearly 6,000, when the torque plateau thins out. This is an engine that loves to be revved in the 3,500- to 5,500-rpm range, where you reap the most benefit from the turbos, it seems.

What makes that engine so effective in those larger vehicles is its accessible torque. Yet here it’s in a car that’s about 700 pounds lighter than the Fusion and nearly 1,000 lighter than the Escape. So to help deliver that through the wheels in a controlled fashion—especially out of low-speed corners or on rough surfaces—the Fiesta ST gets an eTVC (torque vectoring) system that helps reduce understeer and hold traction by braking the inside front wheel. Separately, the stability control system has a full-off mode, along with a wheel-slip mode for intervention only during all-out hoonage.

The only piece of Focus ST hardware (or shall we say software) lacking in the Fiesta ST is the larger model's torque-steer compensation (with the stability and torque-vectoring system talking to the steering); as it is, some torque steer is noticeable in this car, but definitely not an issue provided you keep your hands on the wheel while driving with your right foot to the floor.

Flat and composed, yet a little sharper

Suspension-wise, Ford hasn't changed the fundamentals from what's offered in more pedestrian Fiestas. That's alright, as we already thought that the Fiesta is one of the best-handling—or at least best-steering—budget subcompacts on the market. But here, springs are stiffer, dampers are recalibrated, and the car's center of gravity has been lowered by more than a half inch. Add in modified front steering knuckle, a little more negative camber, and a revised rear twist-beam layout—with more roll stiffness—the ST feels far more flat and composed in corners than we'd expect.

In truth, the road surfaces in Southern France are quite good, with only a few juddery pavement surfaces on some of the narrower country roads, so we'll have to reserve judgment on the ride quality and road noise—as well as the effectiveness of the rear twist-beam layout—until we get this car out on either frost-heaved Michigan or New York roads, or out on the coarse surfaces we see on Oregon highways and backroads.

We've long held a belief that the Fiesta's steering is one of the best in this class; now with proper grip and sharper tuning, what we can confirm that from these challenging roads is that this little hatch never feels nervous; it feels lock-step with the road, confident enough on aggressively crowned roads or irregular surfaces, yet it loads and unloads with confidence in tight hairpins and feels like a light, quick-ratio unit ideal for close-quarters city driving as well.

The only disappointment, perhaps is the turning circle. When a navigation detour that took us up a French village alleyway too sharply zig-zagged even for a Fiesta—followed by a dead end with a stern, stoop-sitting black cat meeting our glance—we noticed that we didn't have the standard Fiesta's turning circle (36.7 vs 34.4 feet).

With the Bridgestone summer performance tires, it's also, from what we could tell, surprisingly neutral on smooth-surfaced, tight corners, and its somewhat quicker-ratio steering rack feels sharper and about as communicative as you can expect from today's electric-boost units. The ST is the first Fiesta to get rear disc brakes, and there's a larger master cylinder compared to all the other models in the lineup—which amounts to a firmer pedal feel.

As much as the Fiesta ST manages to feel familiar if you've driven the Focus ST—with some of the same controls, layout, and seemingly endless torque curve—it feels different when you start really digging in.

Recaros make the most of the package

For one, the seating position in the Fiesta ST is quite a bit different. Even though the snug Recaro sport seats you get in the Fiesta ST look much the same as those in the Focus ST (they're not, Ford officials insist), you tend to sit higher over the beltline in the Fiesta, with a better view out, perhaps, and definitely with less of the Focus' confining feeling that the instrument panel is enveloping you.

Considering that I'm 6'-6”—“irrepressibly tall” as I was called the other day—and can't get all that comfortable in the short, flat seats in the base Fiesta (our editorial director Marty Padgett asked me beforehand if I fit in the Fiesta), the Recaros (a $1,995 option) are almost magical. While some might think perches these aggressively bolstered are out of place in such a car (or perhaps too tight around the middle), they're supportive in ways the base seats aren't, and they make all-day trips in the ST suddenly sound desirable.

From our best guess, the Recaros will take away some rear legroom compared to the standard seats, but it's a tradeoff we think will be welcome by most buyers.

You may notice from our pictures that we were driving a two-door Fiesta. No, that doesn't mean that we're getting a two-door Fiesta ST, or a two-door Fiesta of any type for that matter. Although we've noticed subtle (and not-so-subtle) handling differences between two-door and four-door models in the past, Ford officials insisted that the driving characteristics, ride quality, curb weight, and nearly everything that pertains to the experience from the driver's (and passenger's) seat will be very, very close.

An official said that the five-door, U.S.-spec ST will add up about 130 pounds heavier than the two-door we drove—putting total curb weight somewhere around the 2,700-pound mark.

ST is at the leading edge of 2014 Fiesta changes

The Fiesta ST will get the same refreshed styling as is due for the rest of the 2014 Fiesta lineup—including a front end that will not more closely fit in alongside the new Fusion sedan (and Focus). But a black honeycomb-mesh grille and somewhat more aggressive air dam will differentiate the ST from the outside—along with a blacked-out, cross-patterned rear diffuser and twin chromed exhaust tips. And inside, we're bound to get, as we sampled here in the ST, some new trims, along with a new soft-touch upper dash that, together with revised audio systems, are going to be a major upgrade for the entire Fiesta lineup. The alloy pedals and gear-chift knob are going to be an exclusive for the ST, however.

The other thing that's quite charming, and exclusive, to the ST is its sound. The so-called Sound Symposer pipes the engine note into the cabin, through a membrane that brings out critical frequencies (almost as a sort of kazoo). The intake piping in the Fiesta ST has a variable inlet system, whereas in the Focus it's a digital on/off valve; in either case, we could hear the Fiesta's throaty engine sound when we wanted to not when we didn't so it's a success.

The Fiesta ST is only offered with a manual gearbox, but even considering that we have one chief complaint of the ST after putting it through the paces: It's that its turbocharged engine doesn't require much driver involvement. Even when you're on a challenging road, in a mountainous setting, you can get lazy—leaving the shifter in fourth as opposed to downshifting to second, for example, and leaving revs below 2,000 rpm coming out of a tight corner. And the engine will simply roll with it. In fact, at cruising speeds in the upper gears, we did several back-to-back informal tests of quick-burst passing power, in 3rd and 4th gears, then in 4th and 5th gears at a higher speed, and there's not much of a seat-of-the-pants difference. As much as we love how the EcoBoost 1.6 has a torque plateau that spans the earth, we caught ourselves wanting more of a reward for bringing this engine to its upper reaches.

By the end of a day's driving—including steep, windy roads, and plenty of revving to enjoy that engine sound—we'd averaged 9.3 l/100 km, or about 25 mpg. Even more impressive is that Ford is expecting an EPA (projected) 34 mpg highway from the Fiesta ST.

The Fiesta ST will be offered in the full line of U.S. Fiesta exterior hues, but we only had access to ones in the three new hues: Race Red, Molten Orange, and Spirit Blue. We opted to spend the day in a model with the orange, and its pearlescent, semi-metallic complexity—looking almost red in dim light, then a smoky orange under direct sun.

With an entry price of just $22,195, and a fully loaded price of $25,360—essentially the car we drove—the Fiesta ST costs thousands more than a base-engine Fiesta; but this is no boring commuter car. Would we get a base Focus ST ($24,495), without the optional Recaros, or a Fiesta ST optioned with those plus navigation and the works?

Frankly, it would be a close call. We just didn't expect the Fiesta ST to drive so well—and we think we enjoyed this car more than the Focus ST or any number of other performance models like the 500 Abarth or MINI Cooper S (both of those models have livability flaws we have a hard time looking past).

In the meantime, we can say without hesitation that this little hot hatch is a hoot. There have been few times since the original Volkswagen GTI of the 1980s that this sort of 'pocket rocket' formula is better than the sum of its parts. This is one of them, and this ST earns the halo.