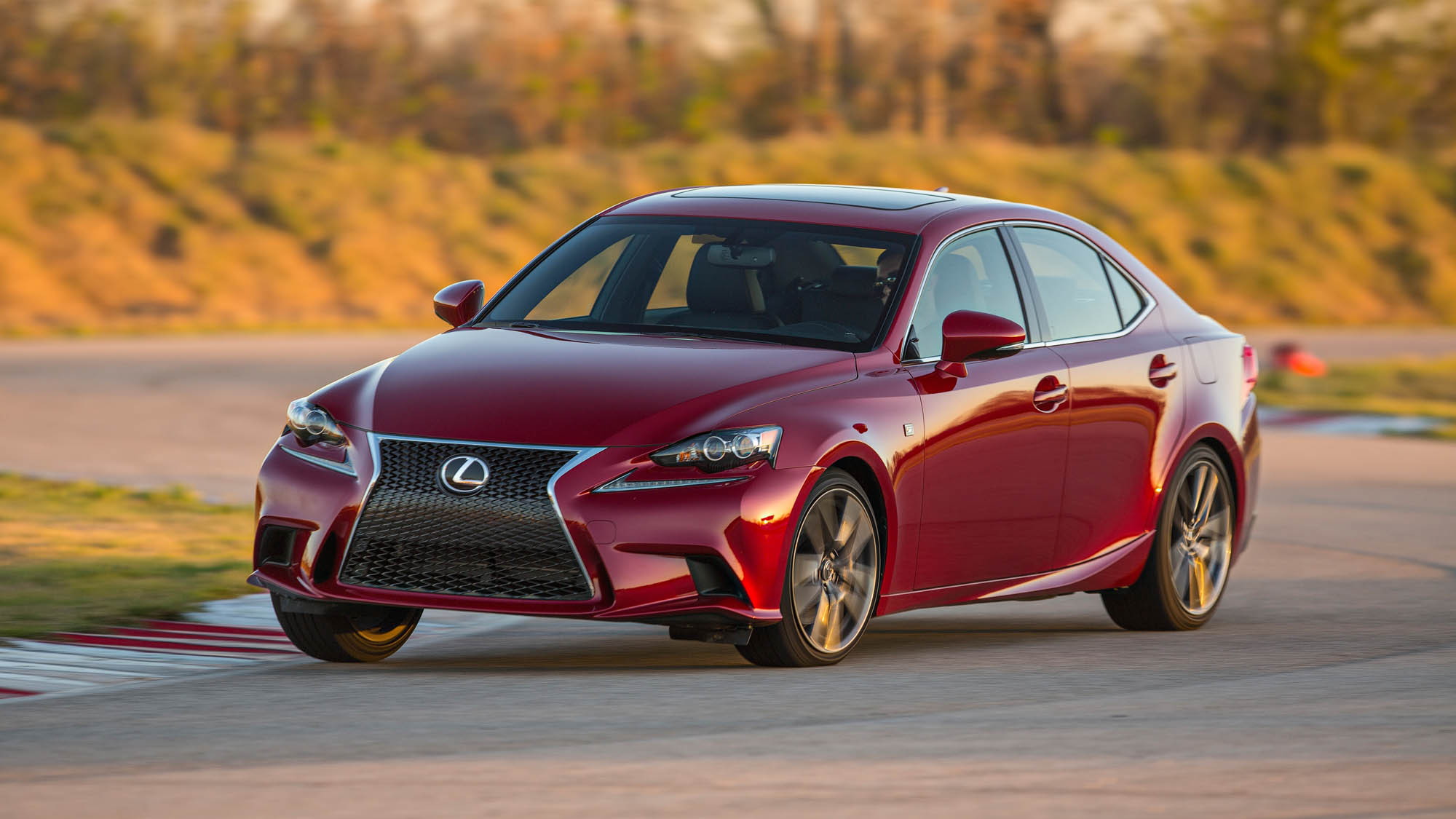 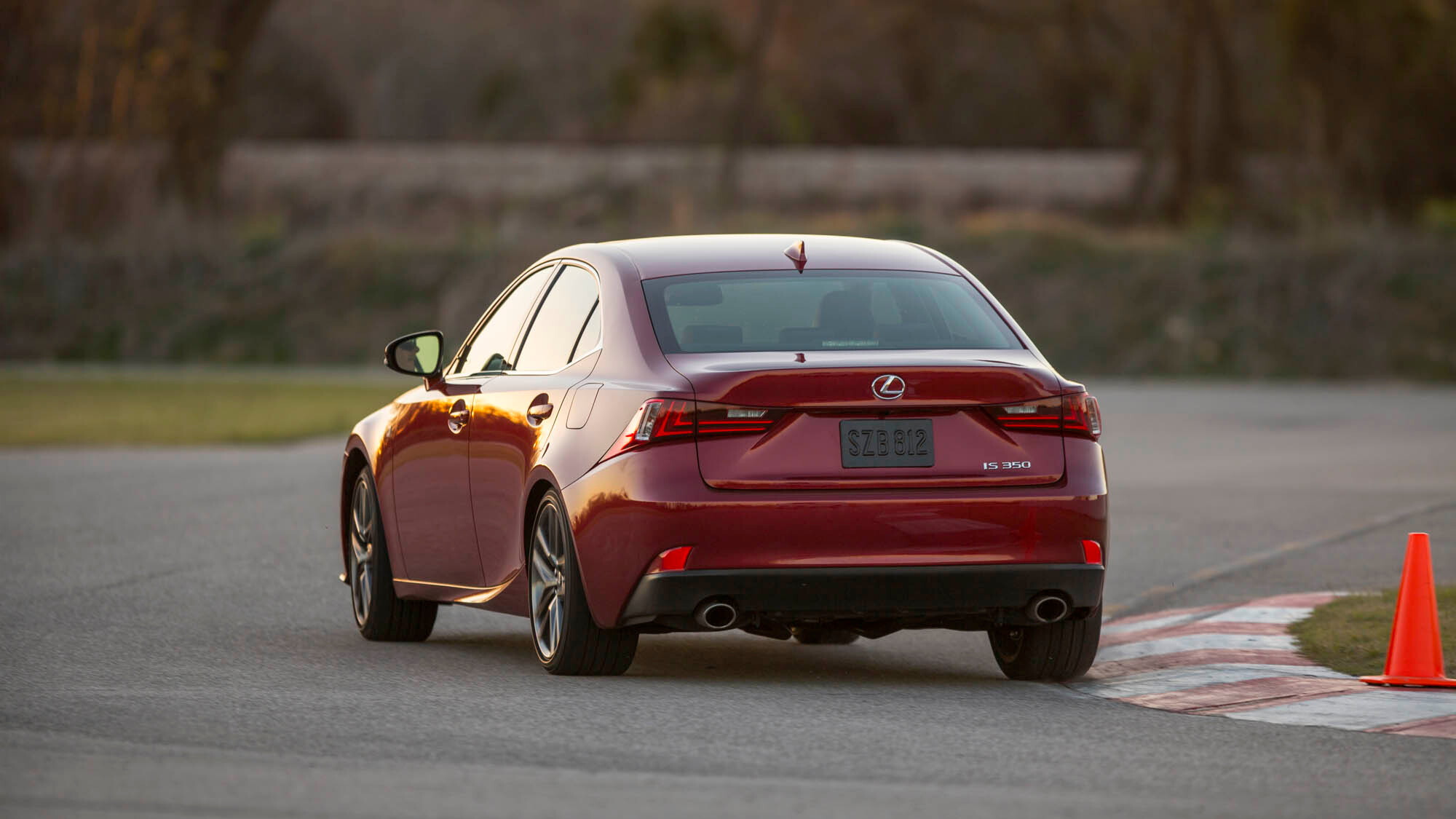 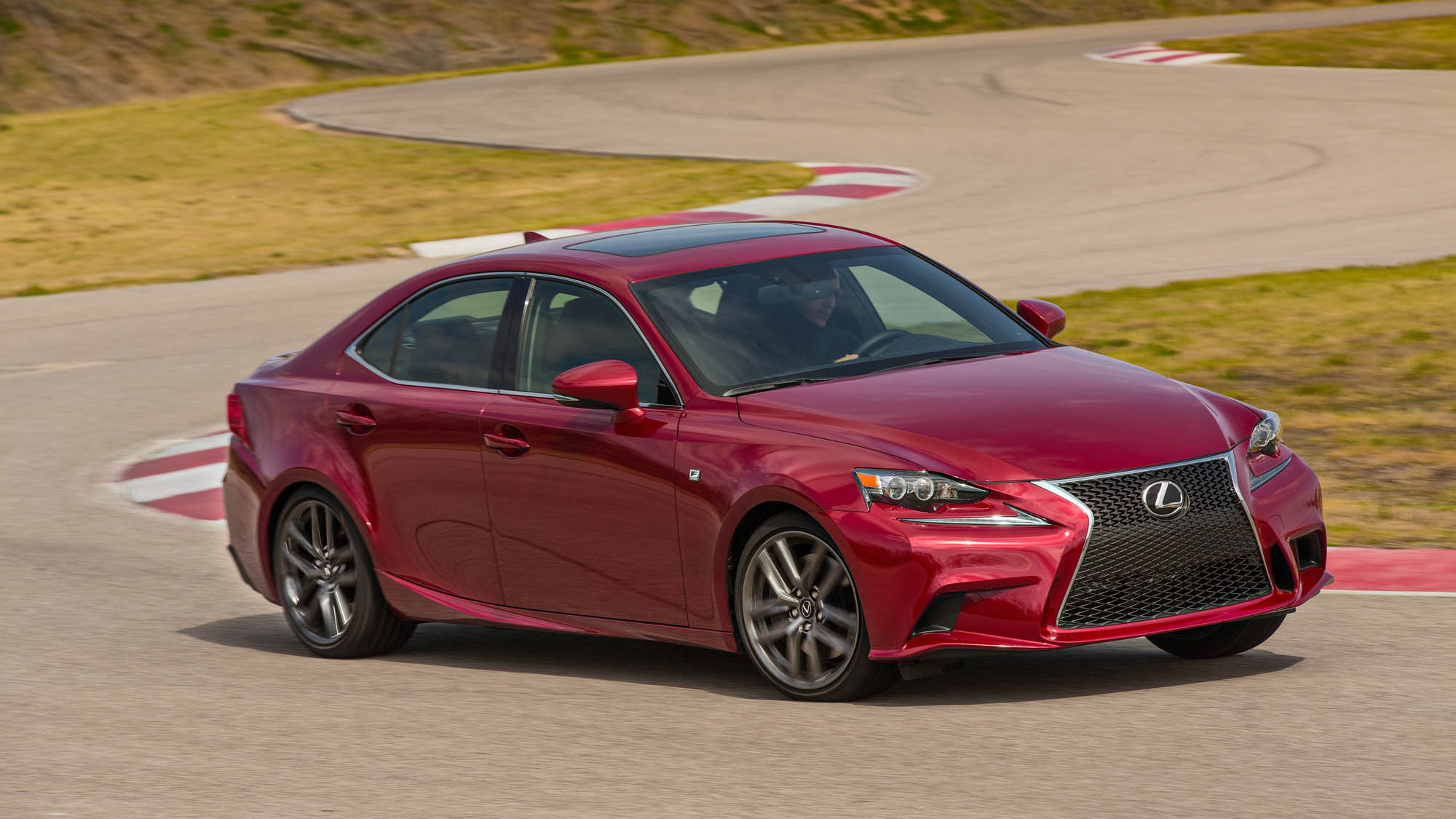 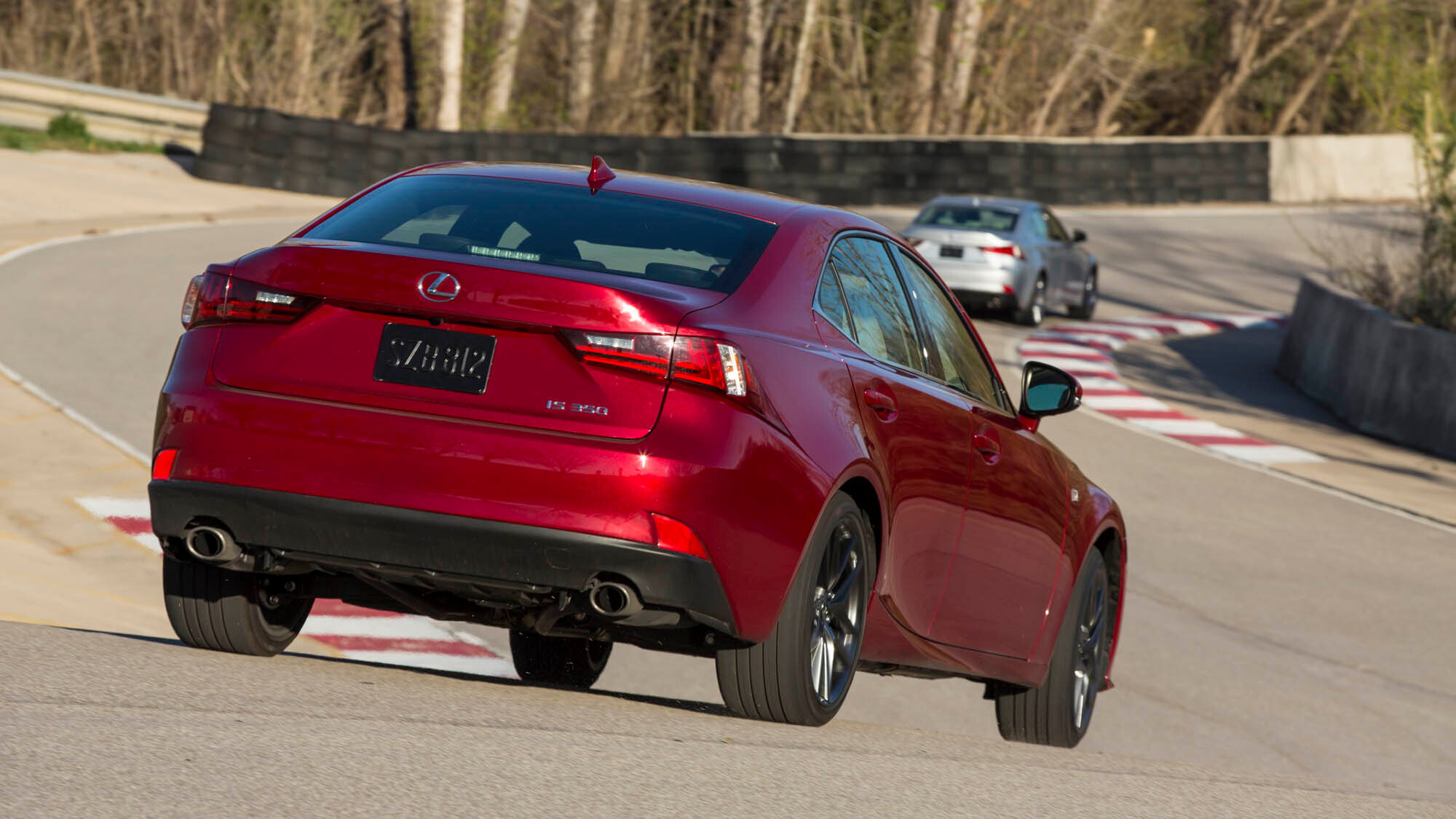 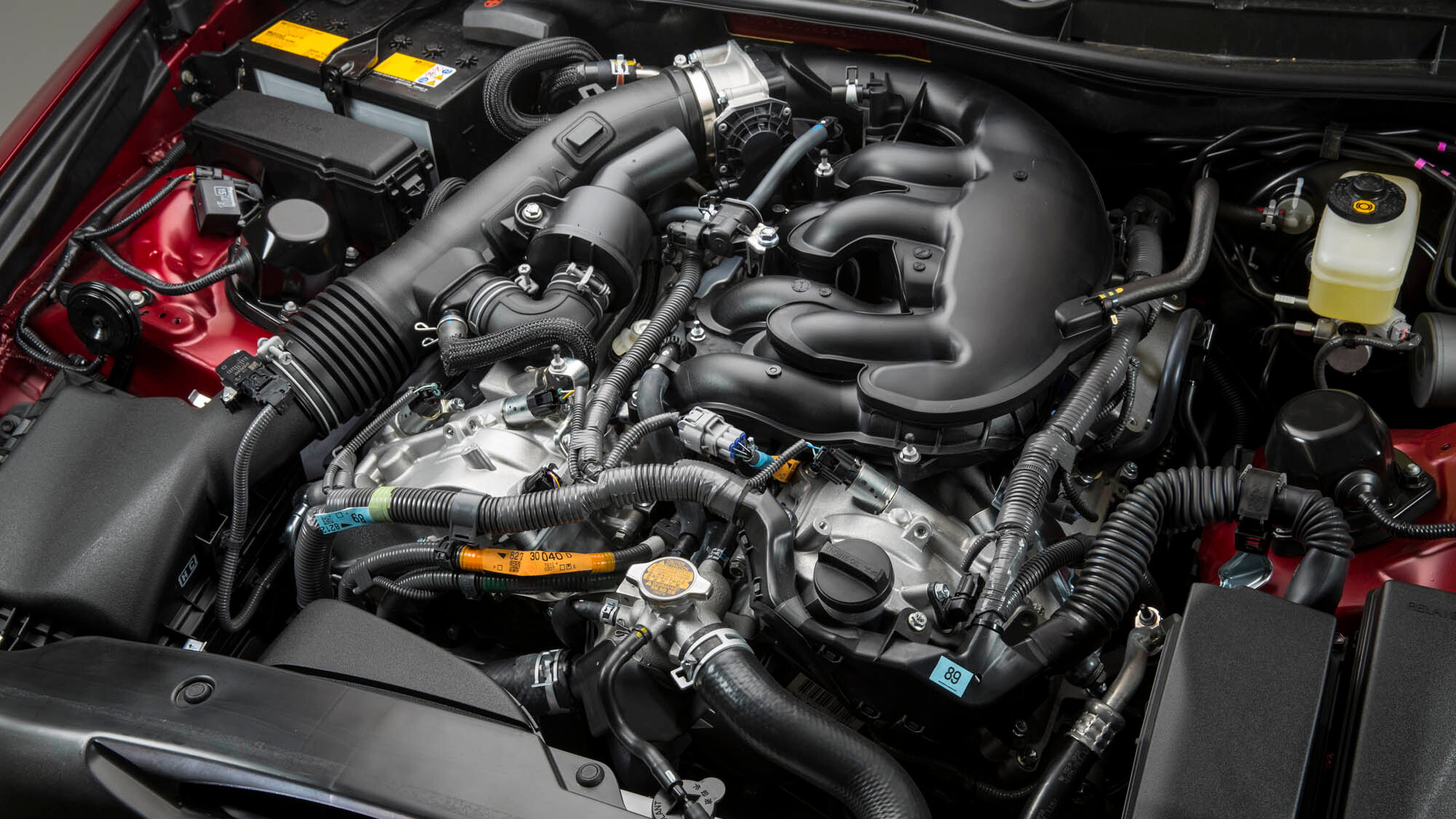 The 2014 Lexus IS is here, and it has a serious set of challenges ahead of it: Taking on the BMW 3-Series, Mercedes-Benz C Class, Cadillac ATS, and the upcoming Infiniti Q50. Can it hang?

This group is one of the most highly competitive in the entire industry, with luxury, performance, and style all being balanced on a razor's edge of price. Hitting the sweet spot can make or break a model's success, and directly impact a company's bottom line, as these are bread-and-butter models for almost every company involved.

It's clear, then, that there's not much room for getting things wrong. Fortunately for Lexus, the 2014 IS hits most of its marks.

Two engines are available, with a choice of rear- or all-wheel drive, and F Sport packages available on the entire range, making it easy to find a combination you'll like.

The entry-level engine in the 2014 IS 250 is a 2.5-liter V-6 engine rated at 204 horsepower and 184 pound-feet of torque. While it's not going to inspire triple-digit heart rates, it's up to the task of accelerating the IS sedan to highway speeds at an acceptable rate, and even willing to play when manually shifted through the six-speed transmission's paddles. Gas mileage in the IS 250 is EPA rated at  21/30 in rear-drive models, and 20/27 in all-wheel drive versions.

The 2014 IS 350 gets a 306 horsepower and 277 pound-feet of torque 3.5-liter V-6 engine that really wakes up the IS' chassis. Punchy, with a fairly wide torque band and smooth around-town characteristics, the IS 350 is definitely the choice if you want to put a little spice in your drive. Gas mileage doesn't take much of a hit in the upgrade from the IS 250 either, at EPA-rated figures of 19/28 mpg in RWD and 19/26 mpg in AWD.

When equipped with rear-wheel drive, the 2014 IS 350 gets the new eight-speed automatic transmission. Smoother, quicker, and more refined than the six-speed transmission in the IS 250 (or the slightly different six-speed in all 2014 IS AWD models), the new eight-speed is very well-suited to the IS' character, and competitive with any alternative offering in the luxury sport sedan class.

A new, 20 mm (0.79 in) lower seating position gives the driver more of a sense of being seated in the car rather than on it, enhancing the sense of control and involvement in sporty driving.

Of course, the IS takes the luxury/performance dichotomy from a different angle than the Germans. In fact, in some ways, it's more BMW than the latest 3-Series.

How so? Because the F30 3-Series is much softer and more ride-centric in its suspension specification, without the taut, well-damped feeling of previous 3-Series iterations. The IS takes its suspension tune in the other direction, adding a level of firmness and sophistication to its nature, especially in F Sport trim, that's a welcome improvement for the enthusiastic driver.

A 20-percent stiffer front anti-roll bar, a stiffened chassis (through the addition of many structural braces, rather than an outright redesign), a new multi-link rear suspension that moves the spring off the damper, and the F Sport's unique auto-manual dynamic suspension all contribute to this refreshed handling and ride quality experience.

The auto-manual suspension system, or Adaptive Variable Suspension as Lexus terms it, uses conventional hydraulic dampers rather than the increasingly common magneto-rheological setup you'll find in other dynamic suspension systems. So how does it adjust on the fly? Through the use of small computer-controlled motors mounted atop the dampers.

Those computer-controlled motors adjust rebound and compression damping forces on the fly, in response to the road surface, driver inputs, and chassis motion. The range includes 9 settings for each parameter, with some overlap, for a total of 21 possible "steps" in damping force. The result is a very predictable, confidence-inspiring sense of control.

Sport S+ Could Be A Bit More "Plus"

While the suspension steps up its game in Sport S+ mode, and the throttle and steering adopt non-linear characteristics to sharpen responses, there's still a bit to be desired in the most sporting mode of the 2014 IS F Sport.

The problem lies in its dynamic stability and traction control parameters. While the frustrating power-cut of a decade ago doesn't often raise its head when slip angles or tire spin rises above its tolerance, the system still biases the car's handling to a steady-state understeer, preventing the sort of rotation we like to see in a good sports sedan, particular on trailbraking and turn-in.

The result is a car that's very stable even when driven hard, but, ultimately, a bit limiting--and certainly less fun than it could be.

But What About The Street?

All of this track testing is fun, but let's be realistic: How many IS drivers will ever find themselves on a racing circuit? And of those, how often? Not many, and infrequently, to be sure.

That's the case with most street cars, and on the open road, the IS really comes into its element.

Like any other modern luxury sport sedan, the IS is capable of speeds and handling that are simply beyond the limits of sanity on public roads. It's faster than you'll ever need to go.

It's also very comfortable, fairly quiet, and ergonomically well laid-out. Rear seat room isn't abundant, but that's the nature of this class. Seat comfort is very good, even for larger drivers. There's plenty of leg room in the front seats, and head, hip, and shoulder clearance are all good, too.

The leg room statement does have one qualifier, however. In AWD models, the center tunnel is enlarged to house the transfer case and other oily bits that give the front wheels their propulsion.

The result is a rather significant intrusion into the driver's footwell area--a fact not only noticed, but felt constantly during the drive for your 6' 2", size-13-foot reviewer. It's perhaps not a dealbreaker, but it's certainly awkward, and not suited to the rest of the IS's very good level of interior packaging.

Perhaps best of all is the redesigned interior, especially the dash.

While the rubbery, matte-finish dash cap remains, a new texture makes it a notch more elegant. The tiered dash design looks like a nod to higher-end cars, and the overall fit and finish is impressive. The new LFA-inspired instrument cluster in F Sport models is both trick and informative.

The center stack display screen is nested in one of the dashboard's tiers, and is one of the best-shaded layouts we've come across--at no point in the drive did we get glare or wash-out due to bright sunlight across the screen's face.

A few areas of either cost-cutting or missed opportunities do remain: plasticky, hollow-seeming buttons on the steering wheel and center stack contrast sharply with the otherwise quality feel of the interior; the cupholder layout in the center armrest area is a bit awkward to reach for front-seat passengers; and the aforementioned issues with foot/leg room in AWD models.

You may have noticed the 2014 Lexus IS looks rather similar to the outgoing model. Sure, there's some new sheet metal, and the interior is (mostly) a massive step forward in design, but ultimately, this is more a heavily revamped version of the current IS than an all-new model.

New welds are placed in several strategic locations to increase chassis rigidity, including the door sills and roof line.

Extra chassis bracing is also placed around the unibody, a new adhesive has used to join sections of the body with greater rigidity, "laser screw welding" is used more extensively (the tech first debuted on last year's IS), and more high-tensile steel used in key locations further increases rigidity while also shaving 22 pounds from the body's weight.

But Should You Buy It?

A much-improved version of an already good luxury sport sedan, the 2014 IS is no longer a half-step behind the Germans in any respect. It's just dancing to a different beat.

That's ultimately the deciding factor between the IS, the Cadillac ATS, the BMW 3-Series, and Mercedes-Benz C Class. All four models come at the market from slightly different viewpoints. In its latest incarnation, the Lexus IS takes a trajectory that might be more interesting to a wider range of enthusiast drivers, at least in 350 F Sport rear-wheel drive form.

While a bit more limiting and a bit less communicative at the limit, the 2014 Lexus IS does a great job of delivering on comfort, fun, and, perhaps especially, style.

Unlike the slightly frumpy design of the latest 3-Series, the perhaps just a bit too blinged-out look of the C Class, or the smooth/sharp Art & Science style of the ATS, the Lexus IS' blend of aerodynamic curves and muscular, sculpted bulges seems not only more organic, but perhaps a bit more artful.

That is, if you can get past that big, gaping maw of a "spindle grille" up front. That one's a love it or hate it feature, particularly in all-black-mesh F Sport guise.

After a full day with the 2014 Lexus IS, we walked away with the sense that it doesn't do any one thing better than every other car in the segment--but it does all of the things those other cars do quitewell, without having a standout aspect that rubs some people the wrong way.

It might just be the Goldilocks luxury sedan: not too hot, not too cool. Just about right.

...If you can accept that spindle grille.