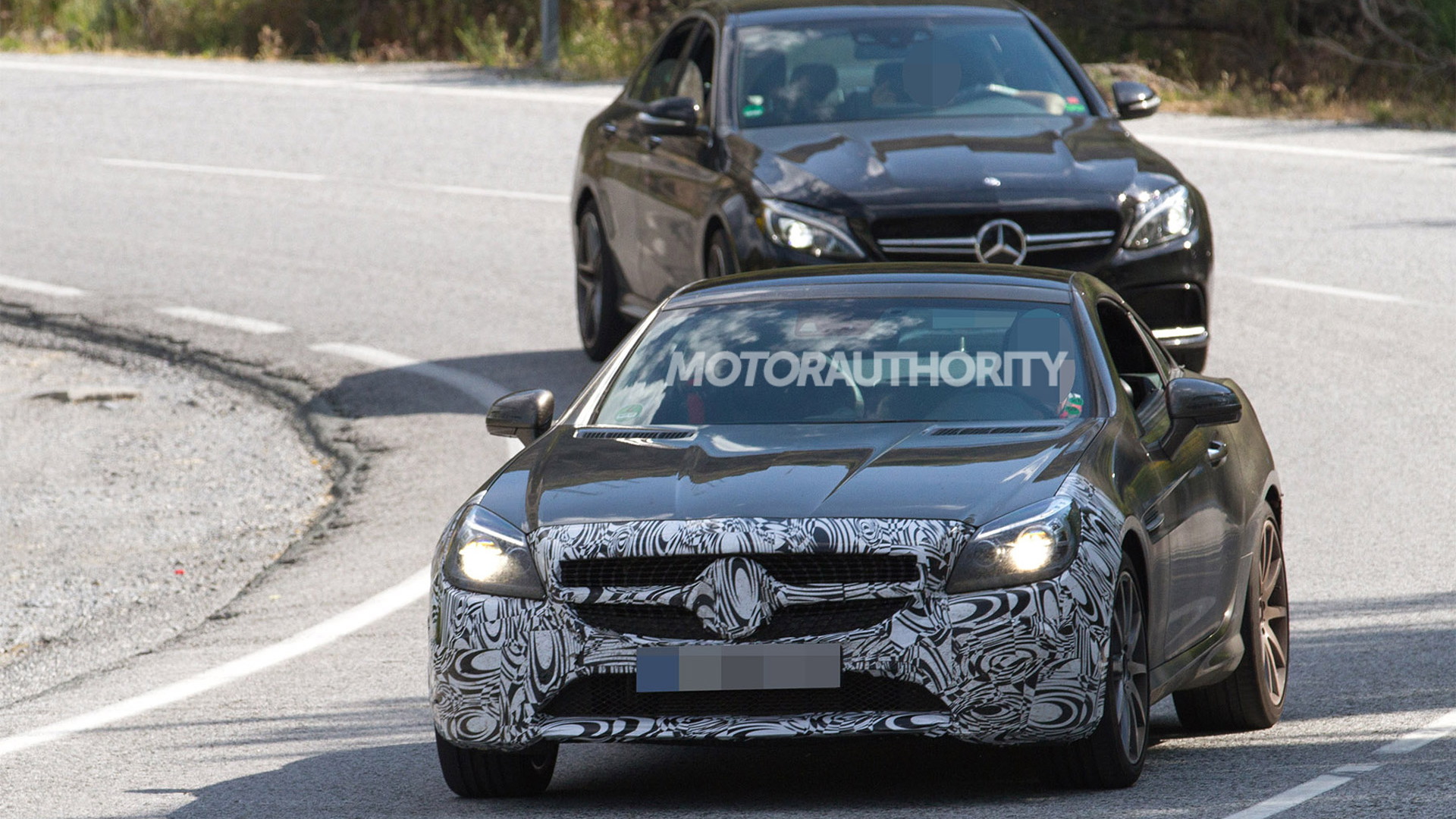 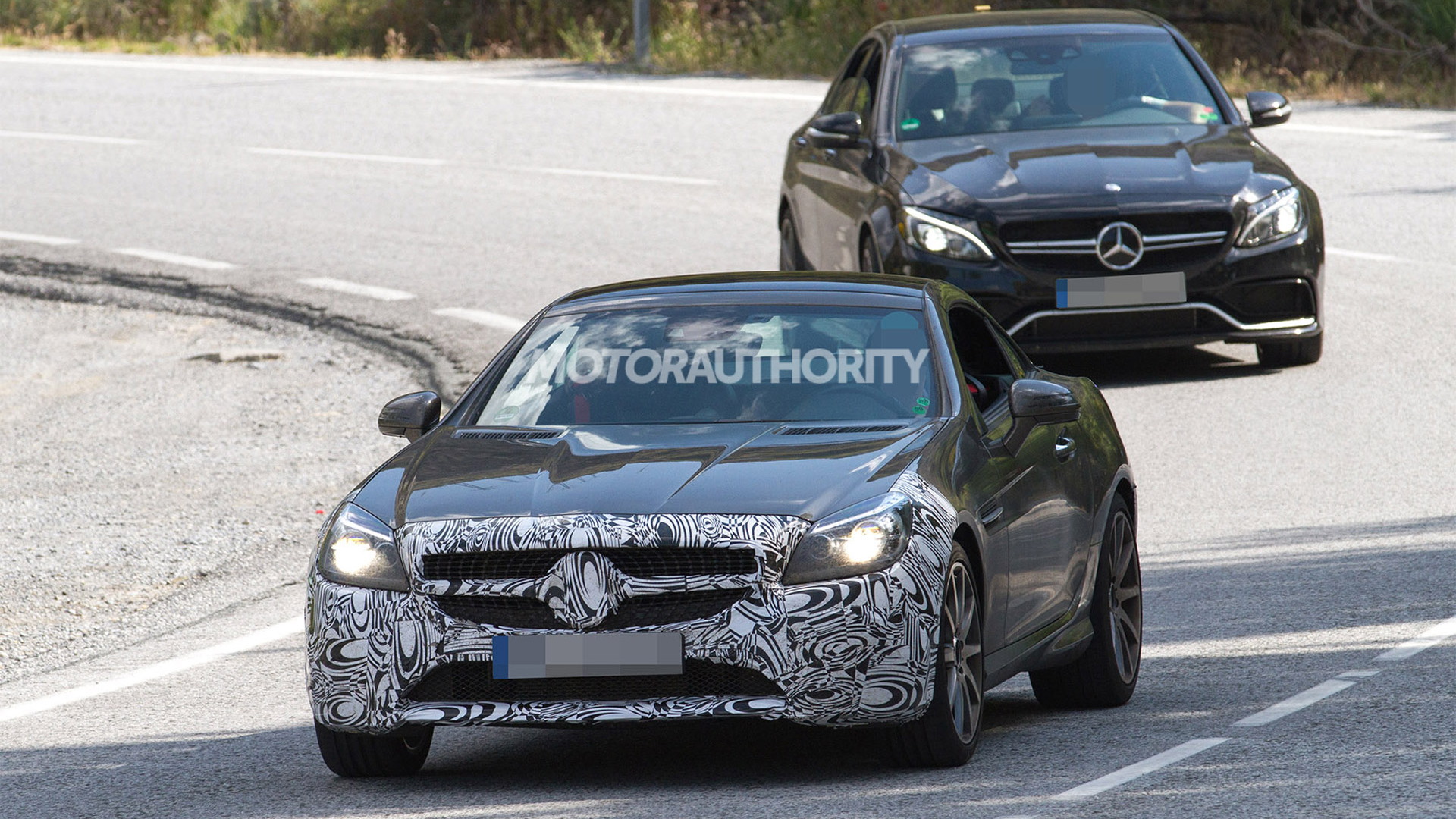 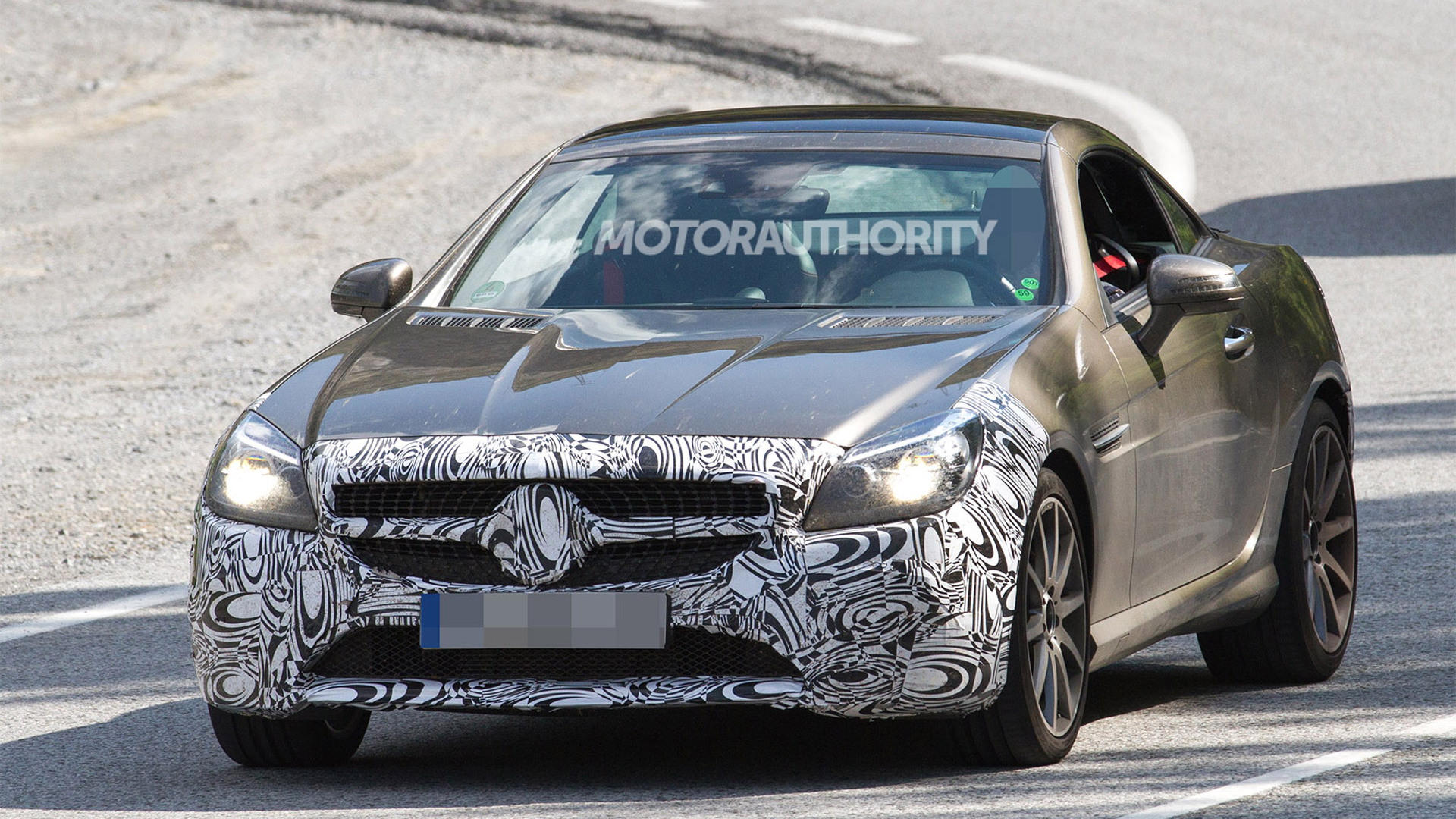 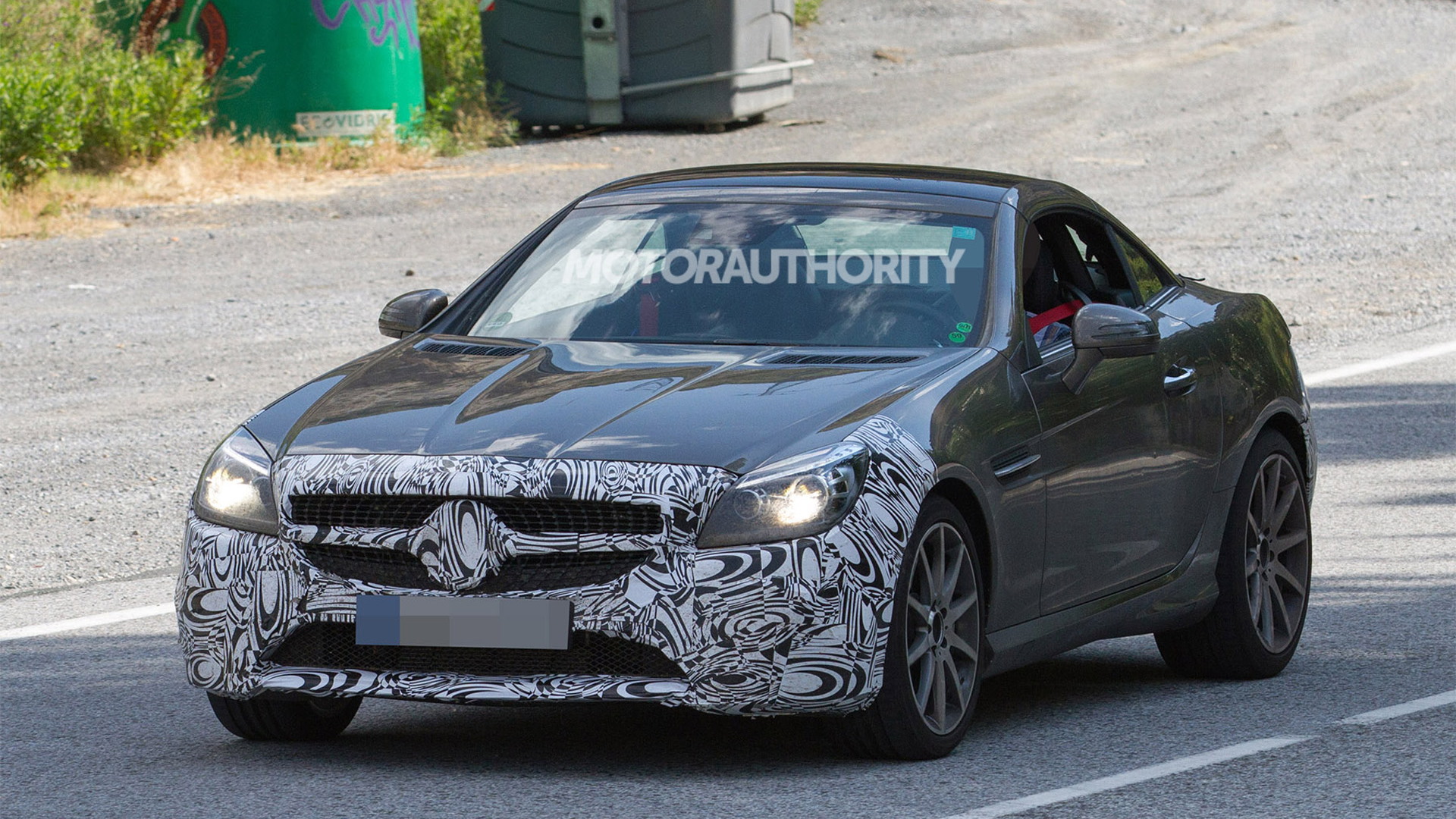 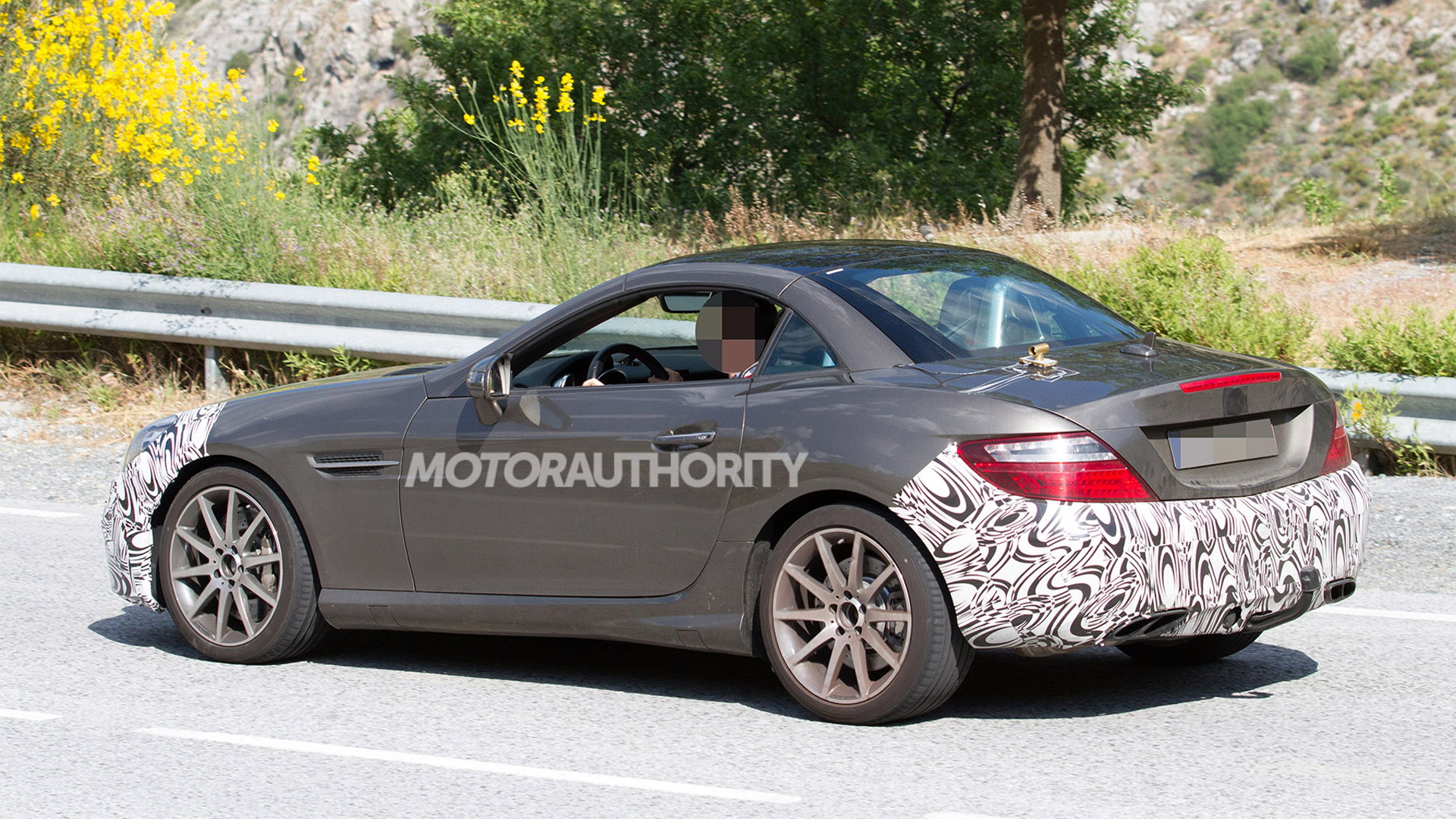 The SLC450 is set to make a comeback, only this time around the famous badge will be affixed to a version of Mercedes-Benz’s entry-level sports car and not the SL-Class. We’re talking about the SLK, which will soon be rebranded an SLC as part of its mid-cycle update, an update that we’re expecting to include a new SLC450 AMG variant.

The AMG sport cars, like the existing C450 AMG and GLE450 AMG Coupe, sit between the most potent standard model of the range and the dedicated Mercedes-AMG offering. The cars are developed by the Mercedes-AMG skunkworks but are officially recognized as Mercedes-Benz products.

This latest prototype differs from previous prototypes for the SLC, suggesting that it is for a new SLC450 AMG variant. Clear giveaways include the sportier bumper up front with extended splitter; large, cross-drilled brakes; and quad-exhaust tips. Note, dedicated Mercedes-AMG offerings also feature quad-exhaust tips but these are typically square-shaped.

Under the hood should sit the same twin-turbocharged 3.0-liter V-6 fitted to the C450 AMG, an example of which looks to be trailing this SLC450 AMG prototype. The engine, which is also common to the GLE450 AMG Coupe, currently generates 362 horsepower and 384 pound-feet of torque. In the SLC, that should equate to 0-60 mph times in under 5.0 seconds. Top speed will most likely remain capped at 155 mph.

Right now it’s not clear what Mercedes’ plans are for the dedicated Mercedes-AMG version of the SLC. In fact, we haven’t even seen a prototype yet. It’s doubtful the car will adopt the Affalterbach tuner’s new twin-turbocharged 4.0-liter V-8, because it may end up cannibalizing sales of the GT sports car. The current SLK55 AMG features a 5.5-liter V-8 rated at 415 horsepower, and it’s possible we’ll see this engine featured in a new SLC55.

Mercedes-Benz has just announced a 2016 SLK range, so we’ll be seeing the SLC arrive as a 2017 model. An auto show debut should take place late this year or early next.