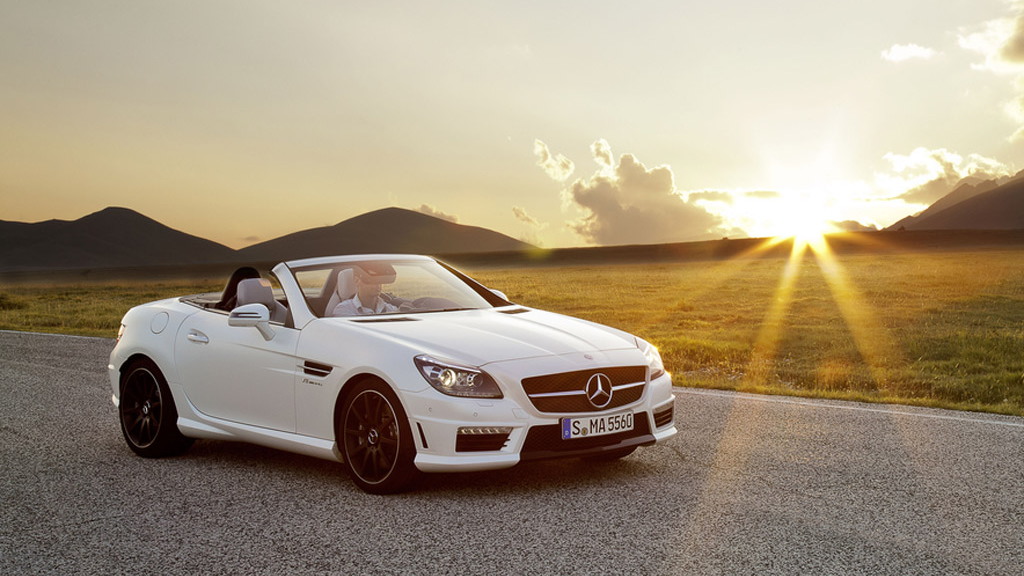 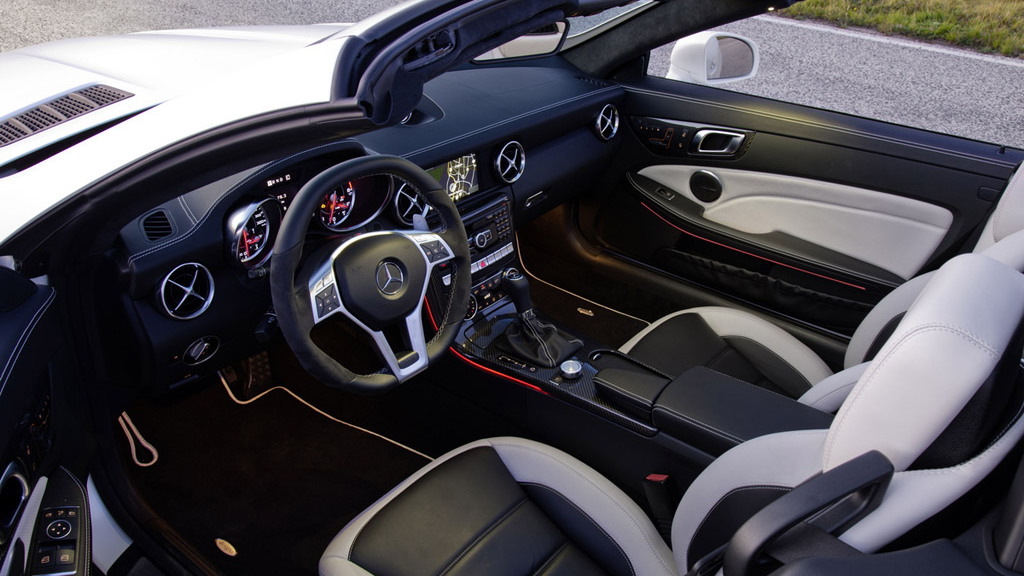 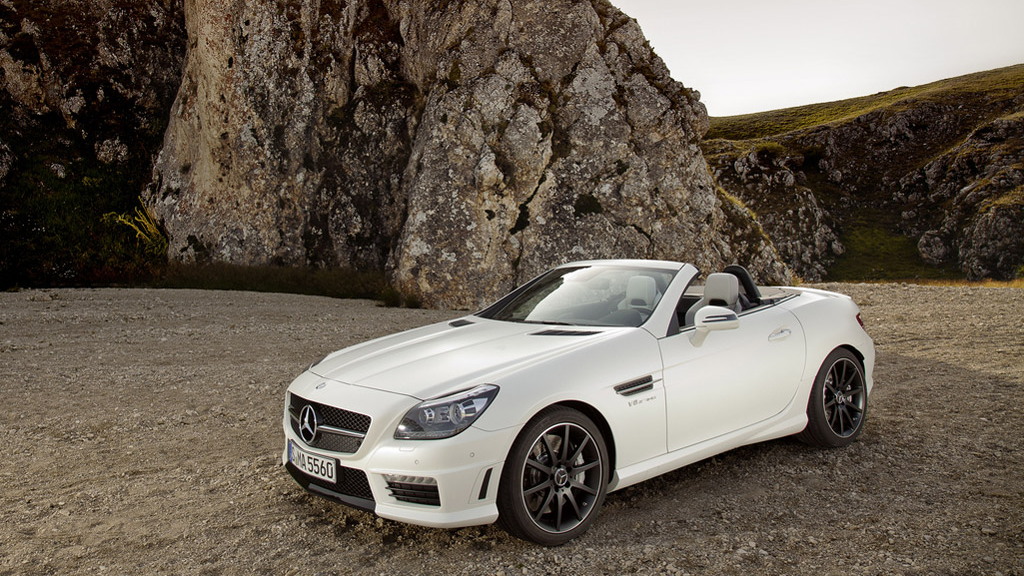 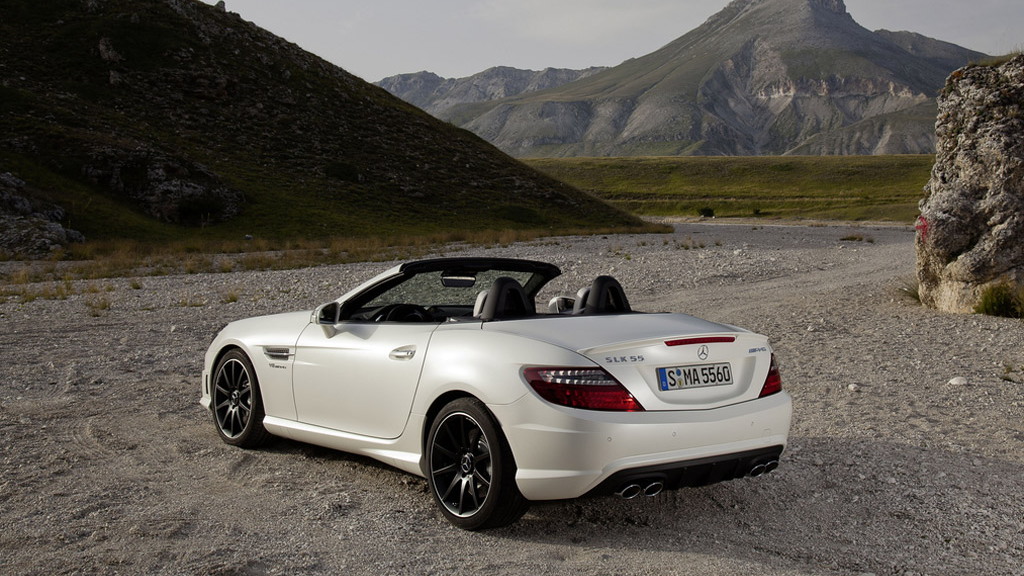 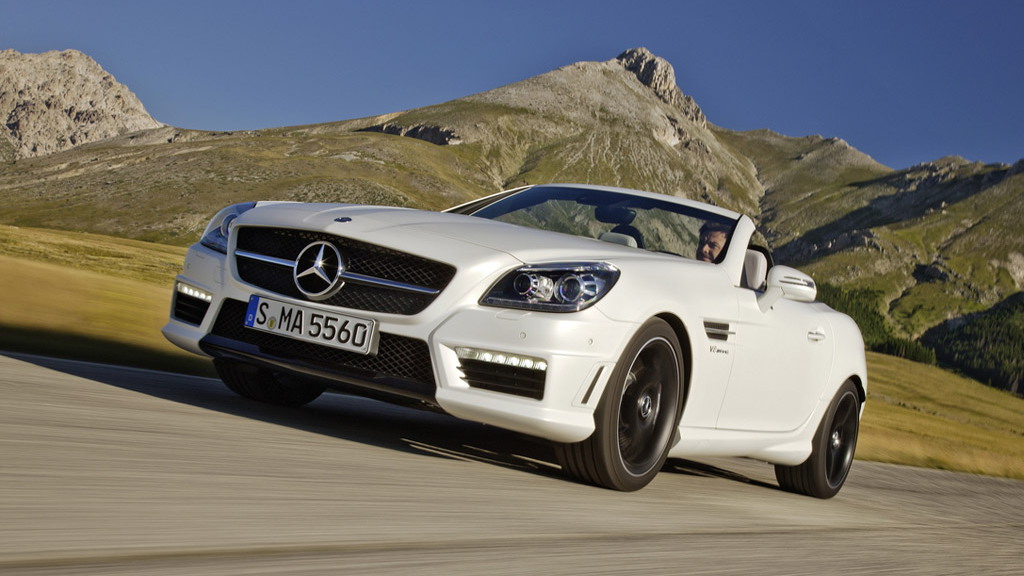 The insults are common and predictably gender-biased: the hairdresser's car, the chick car, etc. But the 2012 Mercedes-Benz SLK, especially the SLK 55 AMG, throws off those epithets with abandon, rising instead to deliver a combination of sport, speed, style, and comfort anyone could love--even macho, macho men.

How does it do it? With a familiar AMG recipe, adding more power, better handling, a dash of race-inspired design, and, of course, AMG exclusivity. Yet the SLK 55 remains the most "lifestyle" oriented vehicle in the range by AMG chief Ola Kallenius' own statement. How do these two personalities co-exist in one smallish roadster? Quite well, actually.

As we light off through downtown San Francisco toward our destination in Monterey, via fantastic winding roads that slice through verdant Redwood-lined vistas, it's immediately apparent that this AMG car is a bit different from the rest. Among the rest of the AMG range, even the CLS 63 AMG, there's a tendency for the softest "comfort" suspension setting to be a bit harsh for daily driving in cratered urban streets. Not so with the SLK 55.

There's still a sport-oriented firmness to the ride, but the dampers have been tuned to demand less from the driver and more from the car--a much better balance for top-down cruising. And that's how we set out despite the slightly damp November chill to the Bay Area air.

With the windows up and the climate control system set, the cabin is neither turbulent nor uncomfortably cold. A mesh divider between the seats helps to settle the wind. We cruise in comfort with the top down for over an hour, enjoying the sound of the 5.5-liter naturally-aspirated V-8 and its 415 horses reverberating from first the buildings, then later then trees, as we (rapidly) work our way to our destination. 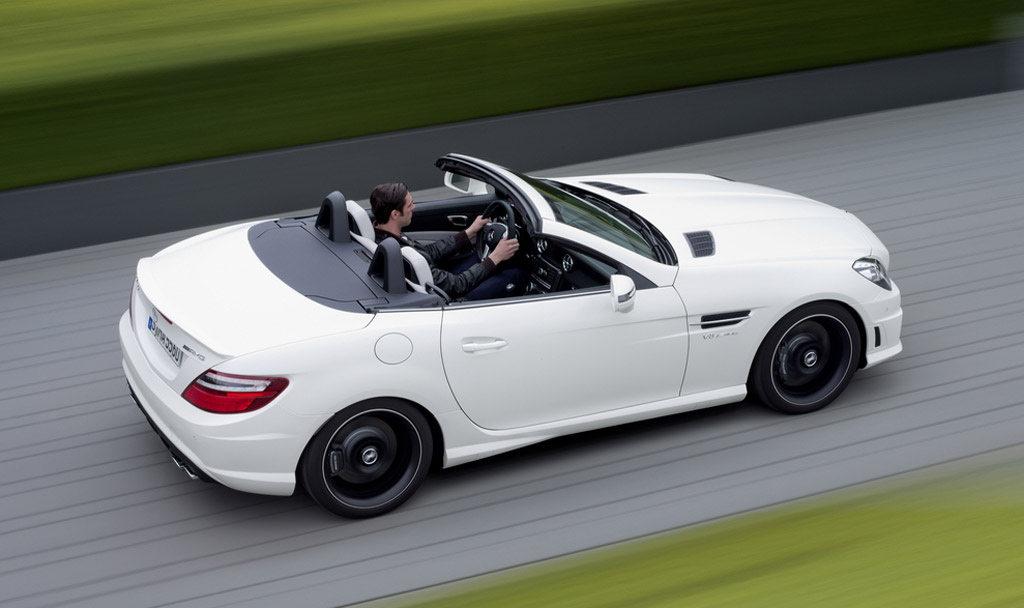 That rapid work, on tight and occasionally treacherously damp or pine-needle-strewn corners, would be more than a match for many cars, including more than a few that self-designate as sports cars. The SLK 55 AMG, which carries as much of its pride as a luxurious, comfortable tourer as it does as a sporty roadster, met the challenge well--for the most part.

In more restrained driving, the SLK 55 AMG shines in a surprising area: fuel efficiency. With cylinder deactivation tech that shuts down one bank of the V-8's cylinders, the SLK 55 can run on four cylinders in cruising mode from 800 to 3,600 rpm, yet transition back to eight-cylinder mode instantly and almost transparently, with only a brief burble and the tiniest vibration through the accelerator to indicate the switch. When flowing with traffic at 50-70 mph on mixed two-lane and freeway, we saw the fuel economy frequently tip up past 30 mpg. And with auto stop-start, we didn't see those figures fall far once we entered town and started the stoplight stutter-step.

Once you get back out on the fun roads, however, you'll find steering is precise, if muted in its feel and feedback, quick to turn and neither too light nor too heavy for quick changes in direction. Body roll is minimal, when in sport mode, and the transmission, Mercedes' 7-speed Speedshift clutched automatic, is a ready partner in either automatic or manual modes. The large paddles are easy to grab even when a shift is necessary while there's still some steering angle dialed in.

But--and it's a minor but, noticed only at the distant end of sanity on public roads--when driven hard over moderately to very bumpy corners, the SLK 55 has a disconcerting tendency to, well, jiggle, for lack of a better word. There's a distinct and unsettling sense of horizontal movement of the body on its suspension any time there's a significant vertical input to the suspension during cornering. It feels, to us, like too-stiff anti-roll bars, a concession often made to preserve cruising comfort while keeping the body flat in cornering. The AMG engineers insisted that wasn't the cause, however. Whatever it is, it's enough to let us know this isn't a car destined for track days, no matter the owner profile.

With the sun fully out and beginning to roast our tender, chained-to-a-desk skin, we decided it was time to put the top up. It's a simple and quick affair, just a button press away--though you do have to be at a full stop for it to operate, or at least we did. Once the top is up, the SLK is much more coupe-like; that is to say, quieter, more closed-in feeling.

Fortunately, there's the Magic Sky Control roof, which can be adjusted from nearly opaque to fully transparent, spanning almost the entirety of the main roof panel. Switch it to clear and the cabin opens back up, exposing the outdoors to your eyes, but preserving the rest of the coupe-like peace. It's a great combo.

Except that the improved serenity of the hardtop cabin reveals another issue: a squeaking sound from somewhere just behind me. Upon further investigation, it's the back of the seat rubbing against the bulkhead as the chassis flexes slightly. My passenger and I notice this because we're both over six feet in height--meaning our seats are back as far as they'll go. Those that sit a bit farther forward might not have the same issue. 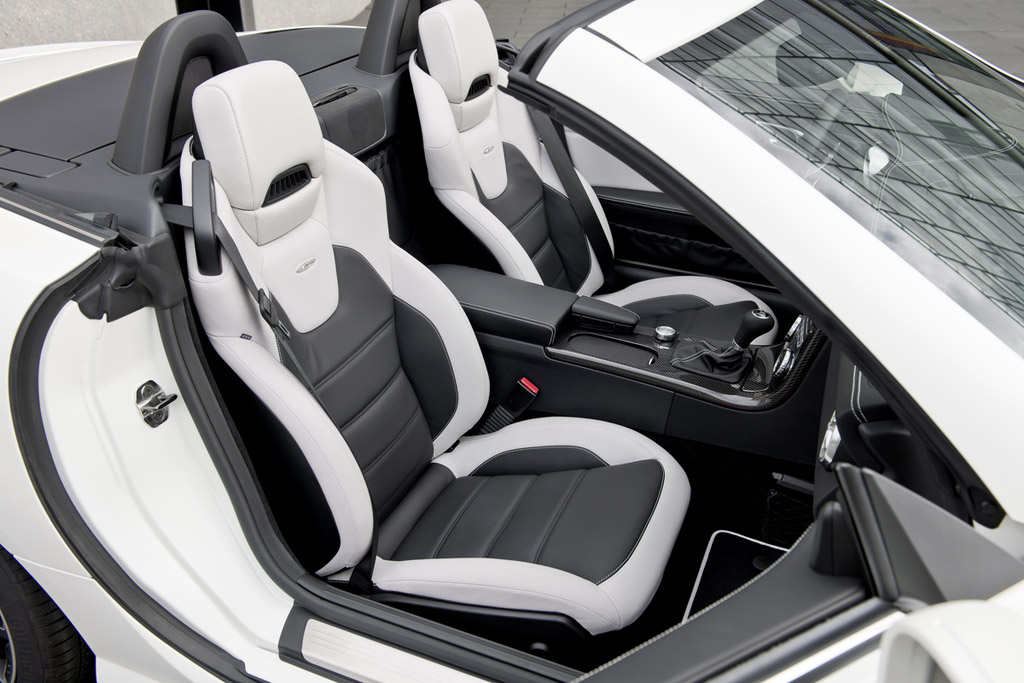 Speaking of being over six feet tall in the SLK 55 AMG, there's one more inconvenience: the passenger footwell is noticeably shallower than the driver's. While drivers up to 6' 4" or more may find the SLK accommodating, even some long-legged passengers south of the six-foot mark may find the right-side seat a bit confining. For this 6'2" reviewer, sitting the passenger seat required moving the seat so far back to gain the necessary leg room that the back of the seat was forced into a more-vertical-than-desired plane by the presence of the bulkhead.

Otherwise, however, interior space and comfort are excellent for a sporty two-seater. The seats themselves are accommodating and a good balance between bolstered easy-to-access, and the drink holders actually hold drinks. There's not a lot of extra space, nor is there much room in the trunk with the folding top down--and you can't put it down without first aligning the trunk dividing partition properly--but there's enough space for a weekend retreat for two.

At the end of a whirlwind day along the central coast, terminating at one of the best tracks in North America, I had no desire to put the SLK 55 AMG to the test with a timed lap. But I did want to drive it back to the five-star resort hotel and the bar and gourmet dinner within, and that may be the best explanation for the car I can offer.