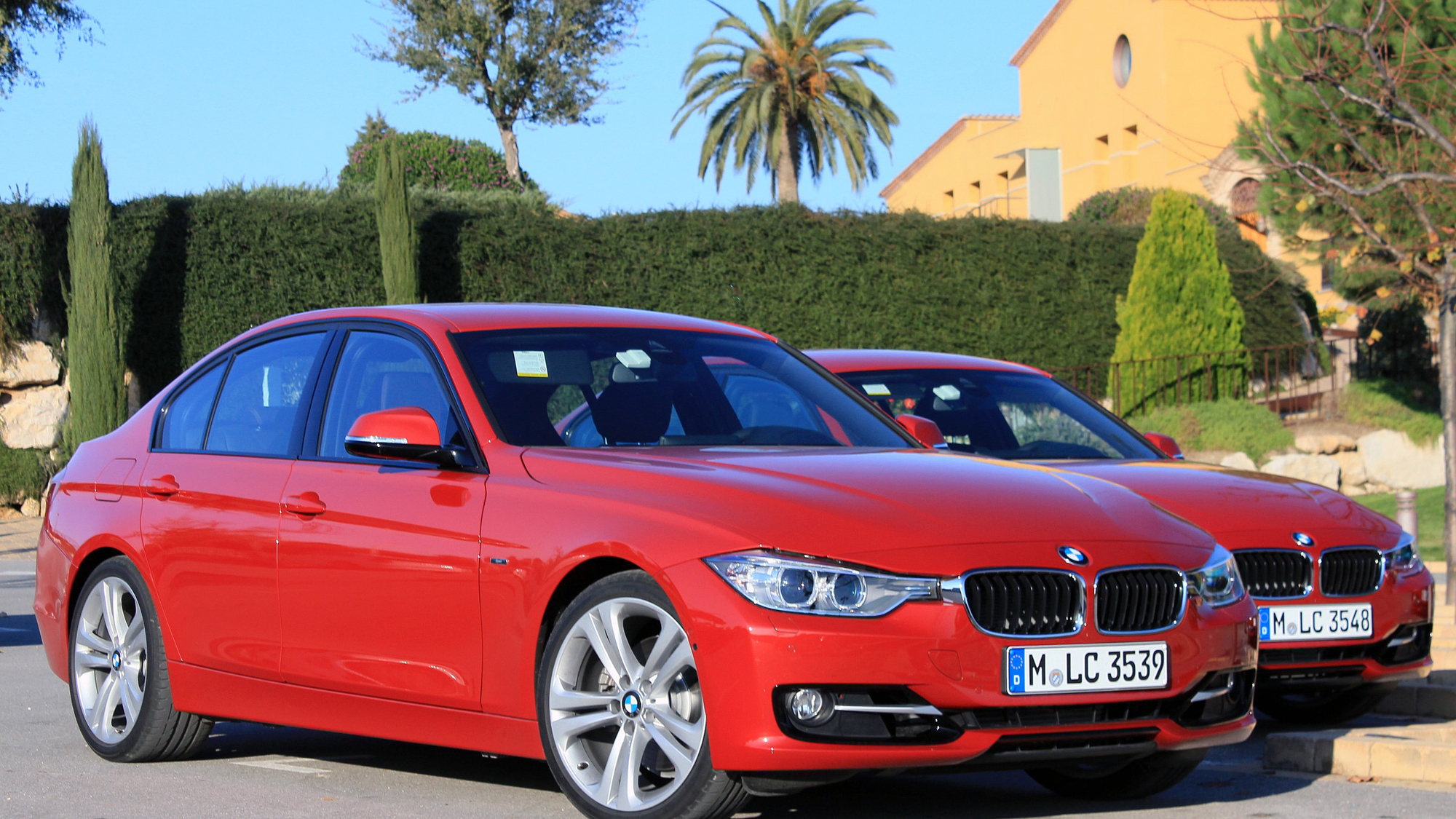 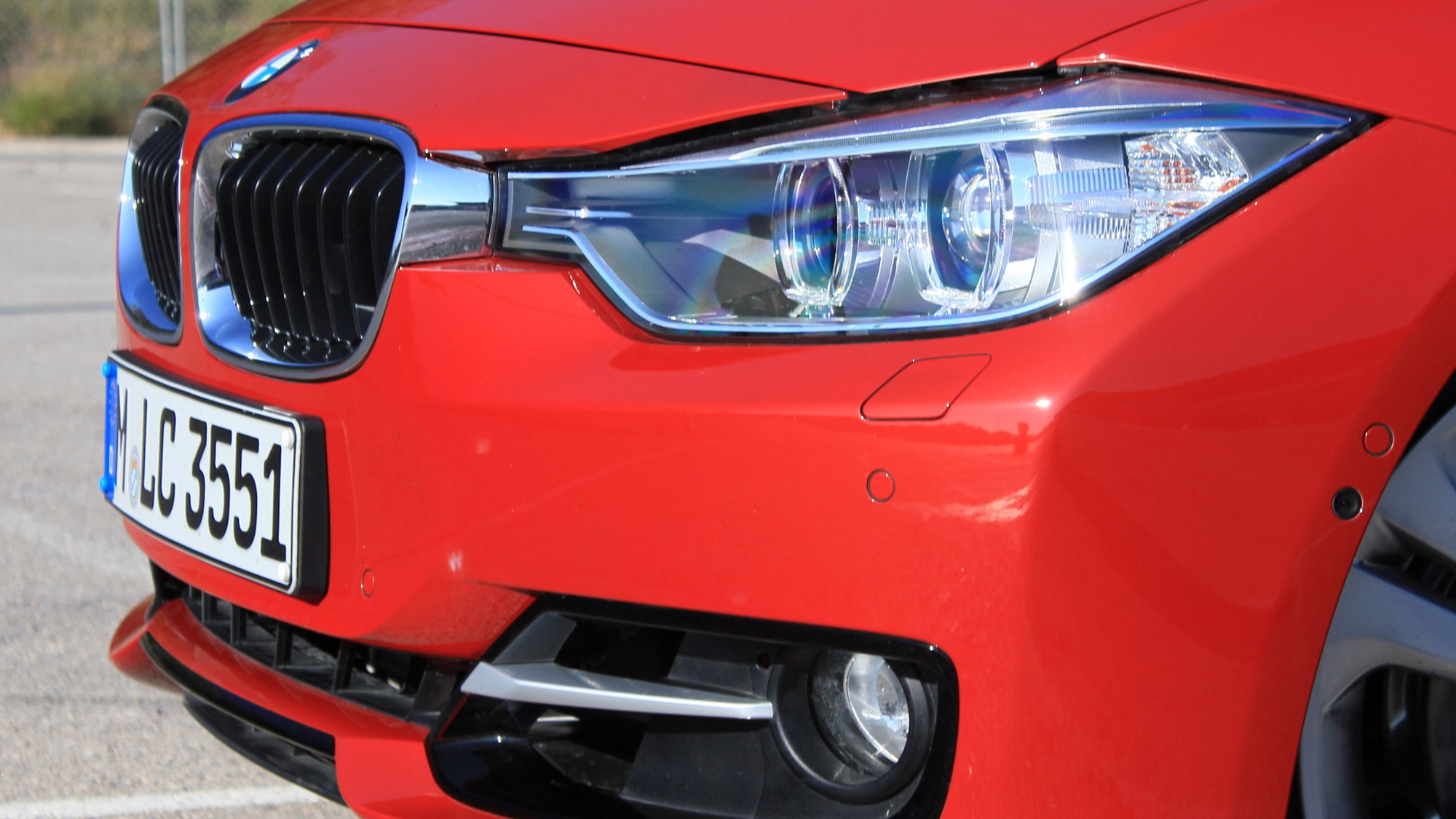 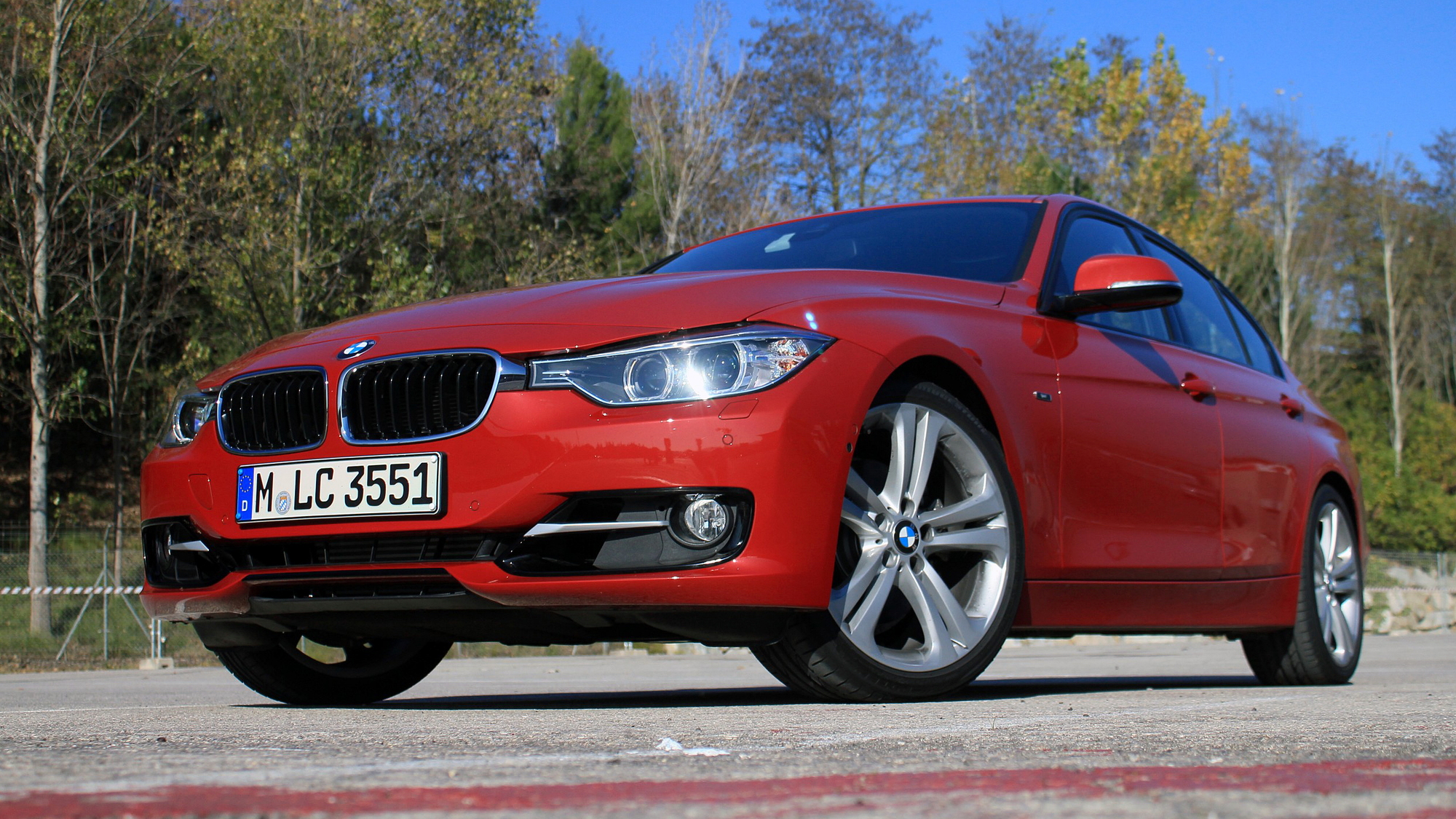 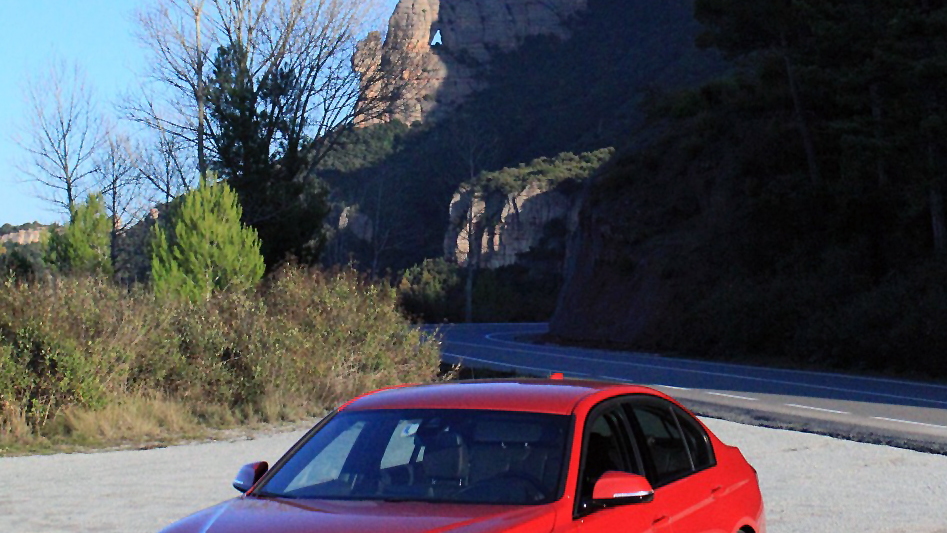 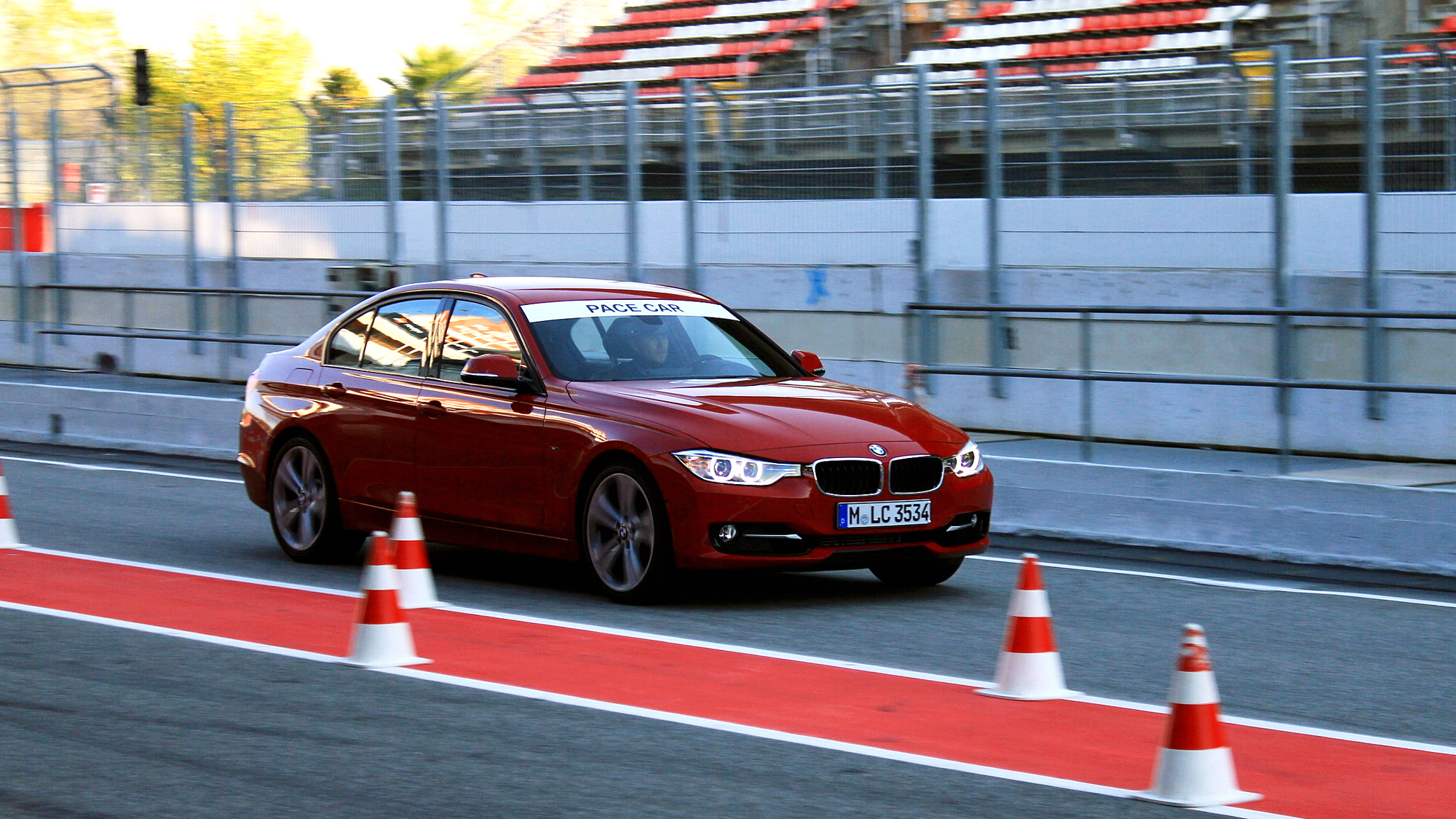 Well, it shines once you turn off all the electronic nannies, anyway. With the sport control setting in Sport+ mode, the eight-speed automatic transmission comes alive--to a point--the throttle response sharpens, and the traction control is disabled. But dynamic stability control, or DSC, remains active.

DSC is great on a wet road. It's not great at all on a track. It's constantly grabbing the brakes on a wheel here and there, trying desperately to straighten a very slightly sliding car out when all the driver's trying to do is get it to turn. It fights you. But hold down the traction control button to defeat DSC, and the car is freed from its electronic prison.

That's literally what it feels like: with everything off, the 2012 3-Series is free to be what it truly is, namely, a very well-balanced and capable sport sedan. The changes from the E90 series to the new F30 don't necessarily seem all the big on paper, but they're immediately apparent on track.

Greater roll resistance thanks to a slightly wider track, still-nimble turn-in and rotation despite a substantial increase in length and wheelbase, and the punchy, responsive four-cylinder turbo come together in harmony to produce a very capable companion in hard driving.

That's not to say the base sedan isn't without its weaknesses. The staggered tire combination in 328i Sport models biases the car toward steady-state understeer, though that can be remedied (roughly) with healthy boots to the throttle. The engine itself is lively, and feels quite strong on the road, but opened up with no concern for speed limits or oncoming traffic, the 240-horsepower and 260 pound-feet of torque leave a skilled driver wanting for more.

But perhaps that's the best compliment we can pay the new 3-Series. Even the base sedan is competent enough on track to feel like it could actually make good use of more power--far more. By way of comparison, the previous-gen 300-horsepower 335i felt like it was near its upper limits in standard trim, while the 335-horsepower E90 335is, which is by no means short of power by most metrics, felt like it was actually overpowered for its suspension and dynamics. The E90 M3 proves the basic underlying chassis is capable of more, but only after extensive improvements to the suspension.

This time around, the F30 feels like it could bear every bit of the twin-turbo N54's power and then some. With the inevitable upgrades likely to come with the F30 M3, we are truly expecting greatness.

OK, so performance aside, what's the rest of the 3-Series like? It's a comfortable, well-made, and attractive car. In our estimation, the 3-Series wears the new BMW family style, including the front end, better than any of the other models in the lineup; the sense of awkwardly bluff noses and ponderous expanses of metal are absent here. It looks sleek, trim, and athletic--as a sports sedan should.

Inside, the cabin is leaps and bounds ahead of its predecessor in terms of visual appeal. The slim, tablet-like optional widescreen display on the dash stands alone but fits right in. The understated but high-tech-looking appliqués on the face of the dashboard, done in brushed aluminum, are likewise noticeable but right at home. The new interior provides a coherence and forward-looking aesthetic missing from the last model. There are also a wide range of new options, including a tan dashboard, that weren't available on the previous model. The new 3-Series looks surprisingly good, even though it has never, to our eye, looked bad. (To get a more complete idea of the myriad of options available, read our preview of the 2012 3-Series and our gallery overview of the various trim lines).

There are, again, a few weak spots, however. The steering wheel is, in the face of the rest of the cabin, almost glaringly spare and old-fashioned. Its rounded contours and simple shape sit at odds with the clever cut lines, transitioning surfaces, and fine materials just inches away. This is made even more obvious with the high-tech, highly useful HUD display just above the wheel, projected onto the windscreen. Relay navigation instructions to a virtual floating box just above my hood? Sure. Put in a steering wheel that looks like it could come from an early-2000s European 1-Series? No thanks.

The rear seats are another potential issue. While they're comfortable enough, and will even allow six-foot-plus passengers to sit behind mid-six-foot drivers, doing so requires a splayed position of the legs that isn't going to be comfortable for long trips. There's 15 mm more leg room than the E90, but it could really use another 45 or 50 mm for actual adult duty. That said, it'll fit the kids and even some smaller adults just fine, and, after all, it's a 3-Series, not an executive limo.

At the end of several days in Spain at the wheel of the new 3-Series, our experiences summed up to make one point undeniably clear: the new F30 3-Series is better, in every important way, than the E90--and the E90 was a very fun, comfortable, and high-value car.

Given a longer term with the car in more practical, familiar surroundings, we might find more to love or hate, but given what we saw in our week with the car, we're pleased to see the 2012 3-Series continue the model's march onward and upward.