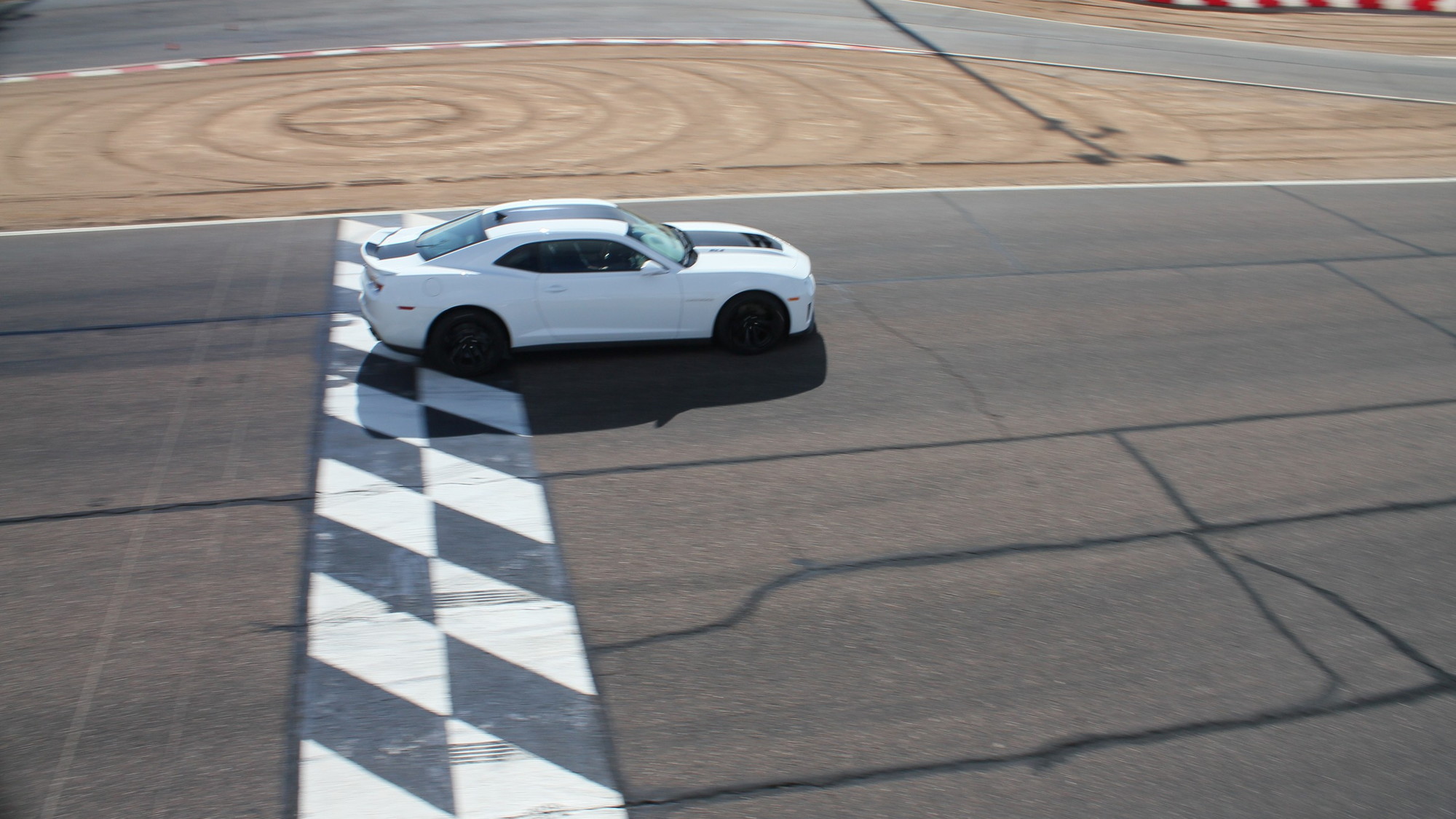 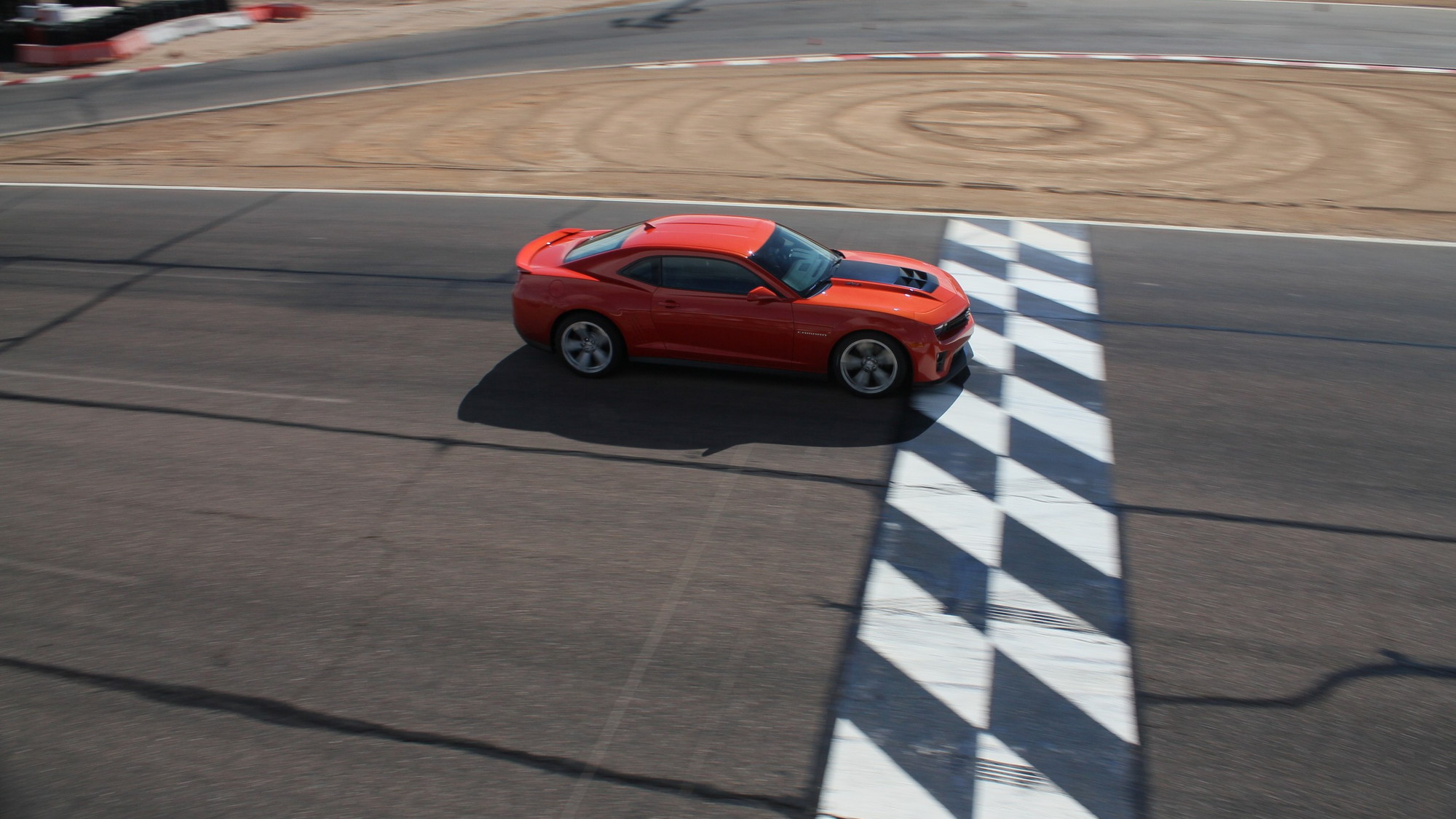 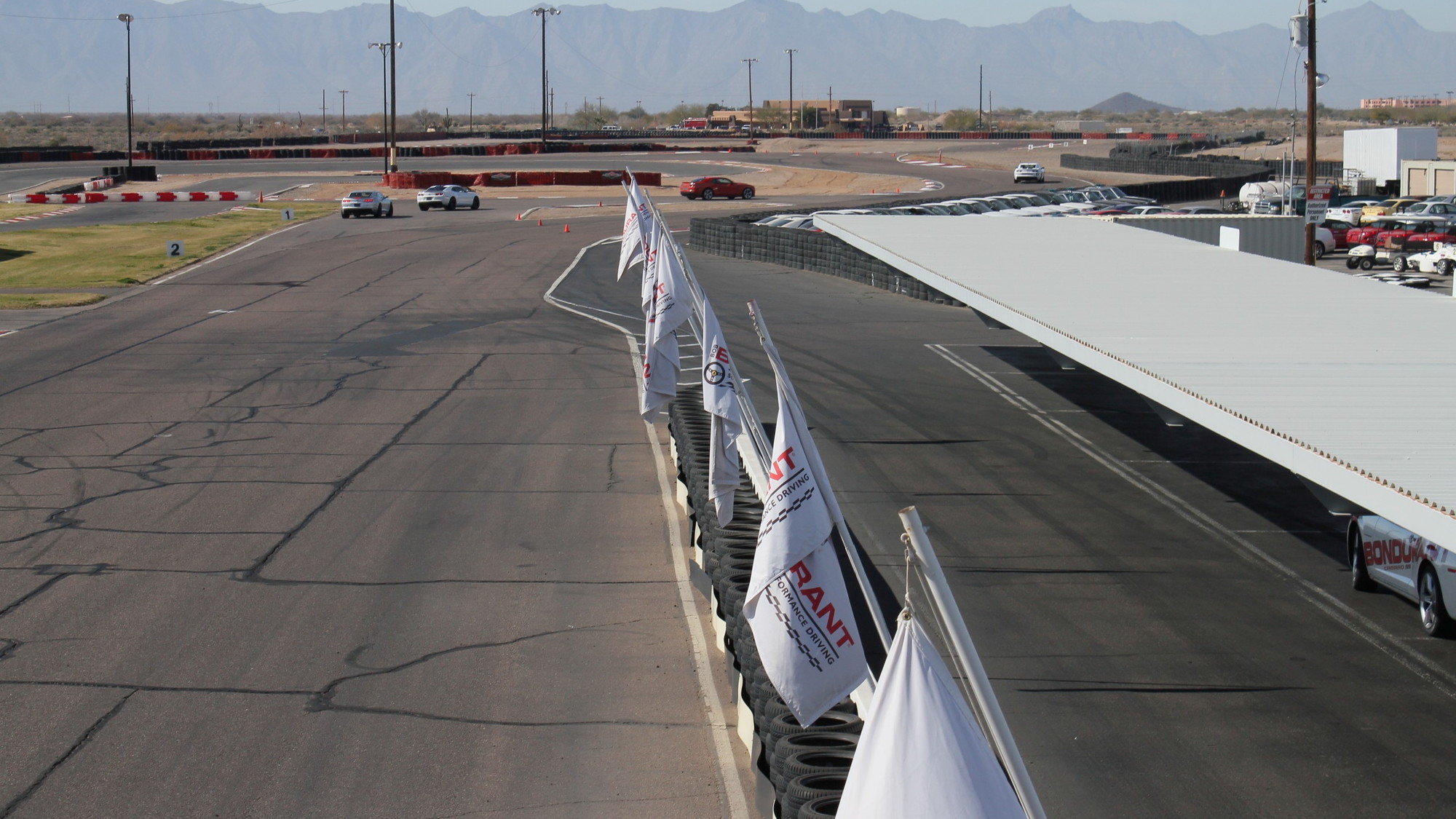 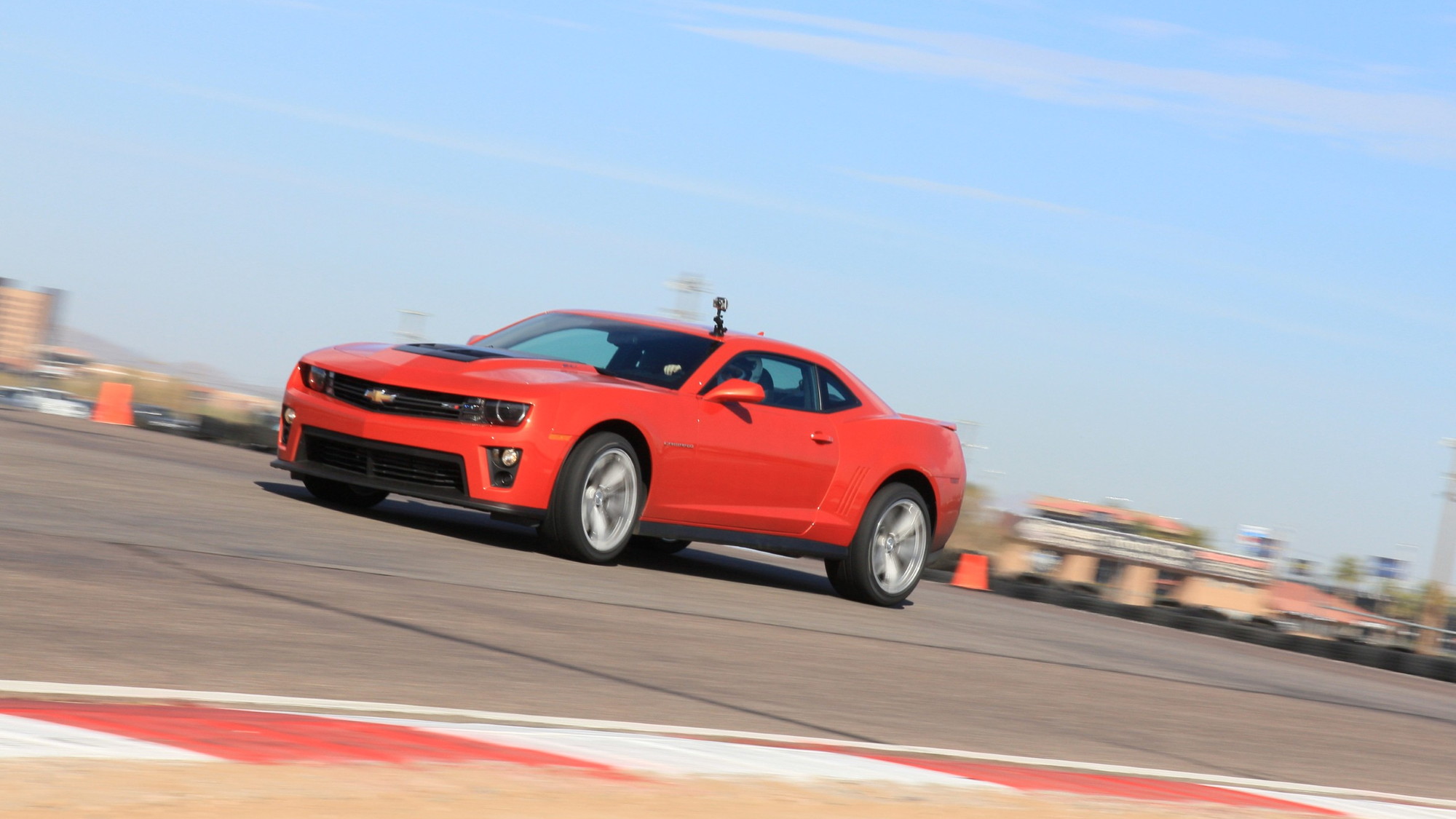 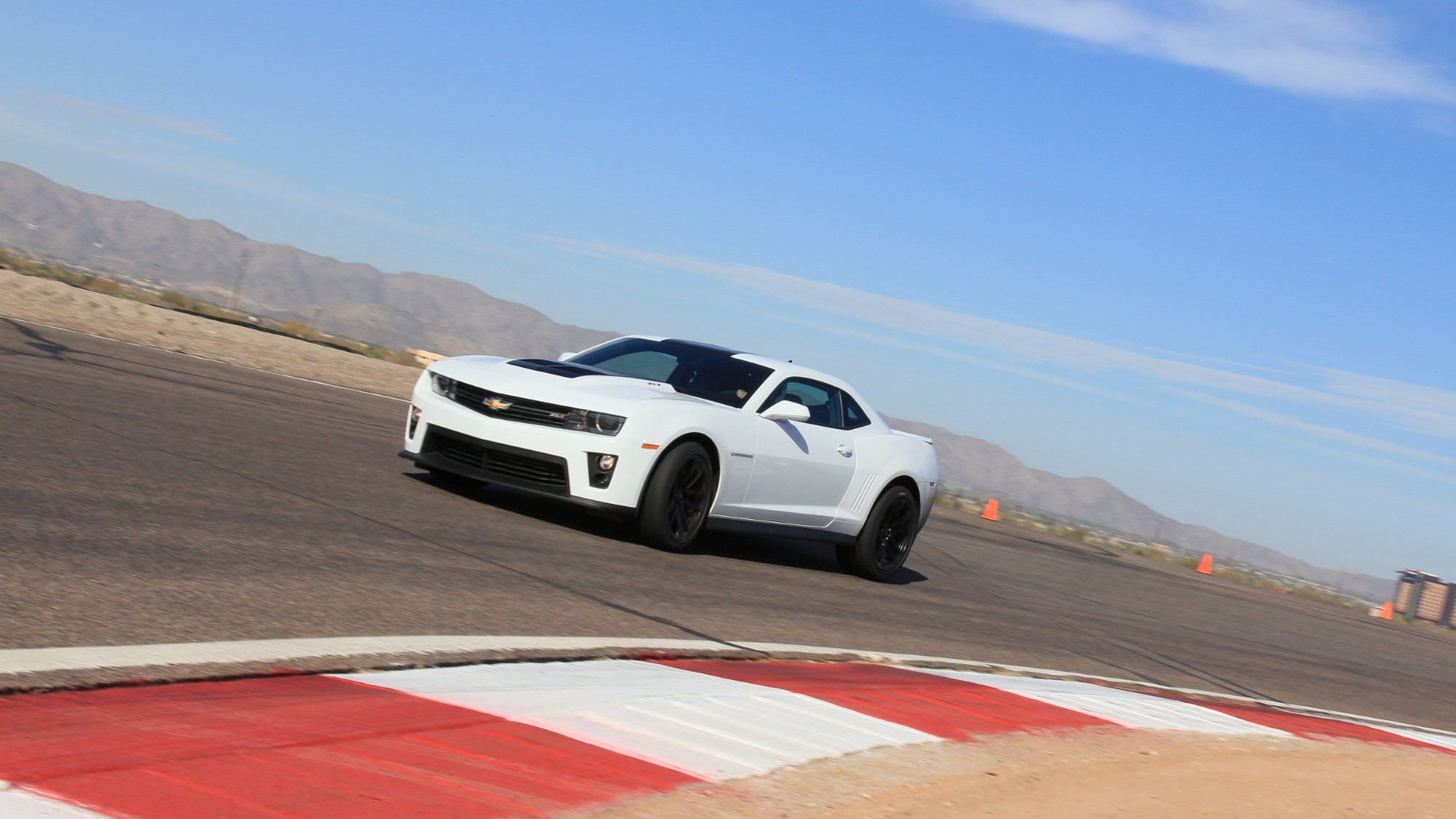 I have a confession to make. Sitting at the lunch table after thrashing the 2012 Camaro ZL1 on track—unrestricted, an opportunity offered to only a few of us at Firebird International Raceway, home of the Bondurant Racing School—I made a spontaneous association and foolishly blurted it out. I compared the ZL1 to the 2012 Porsche 911.

Specifically, I realized, while mentally re-visualizing the last set of laps, that from turn-in to apex, under fast entry speeds with a fair amount of trail brake, the ZL1 felt, acted, and moved almost exactly like the 2012 911 did under similar circumstances. People around the table looked at me with a mixture of surprise and disbelief, some likely making notes to self that I might, in fact, be slightly soft in the head.

I maintain that it's a fair comparison as framed, but I also understand that it's not something most people will believe is true. It is true, but ultimately, it's also unimportant. Why? Because despite its impressive road-course capacity, that's not what the ZL1 is about, or at least it won't be for 99 percent of its owners.

The drag strip, on the other hand, is the ZL1's natural habitat, and it shows. As nimble as it might be for a 4,180-pound, 580-horsepower super muscle car, getting the ZL1 to move quickly around a road course is work. Running it down the dragstrip is effortless, in both manual and automatic transmission forms—because it was engineered to be.

The manual-'boxed ZL1 gets the Performance Traction Management (PTM) system also seen in the Corvette ZR1, but tuned uniquely to the ZL1's setup and mission. The launch control (only available on the manual) in PTM Mode 5 is tuned specifically to the rubber/grip-enhancer/concrete surface of a real drag strip. It tunes itself to suit ambient conditions through data from the built-in barometer and thermometer, adjusting launch rpms to match what it thinks will work with the available grip.

To engage it, you just select PTM Mode 5 with the console-mounted buttons, stage the car, clutch in, and mash the throttle. Wait for the lights, step off the clutch, and WHAM! it's off, scrabbling and chirping down the 60-foot, making the most of the tsunami of torque-producing atmosphere being crammed down the gullet of the V-8 engine by the supercharger.

Hit your shift points—no need to lift, it's built for powershifts—keep the wheel straight, and somewhat less than 13 seconds later, you'll cross the traps at about 115 mph. It's that easy.

It's even easier in the automatic. There's no launch control to futz with, and it doesn't really need it. Just hold the brake, run the revs up to about 1,200 rpm, and roll on the throttle at the lights. The transmission pre-fills the next gear, making its shifts quickly and affirmatively, at the perfect rpm.

After a dozen or so passes at the strip, I was no more tired than I was when I started, but I had set the fastest time in our group of journalist-drivers. And I did it by staying out of the car's way. It's that easy.

Which is exactly what the engineers had intended. The launch control and PTM tuning was built not just to maximize the car's capability (something it does beautifully, even on the road course) but to make sure its part-time drag racer owner wouldn't be embarrassed on the two times per year they bring it out to the strip. Future ZL1 owners, you will never be embarrassed by this car until you think you're better than it is.

Launching the ZL1 on your own is an entirely different matter. Huge torque, a surprisingly quick-revving engine, and the inherent weakness of street tires on the drag strip surface quickly conspire to cause smokey, spinning burnouts. Back it off just a hair, and you'll get hesitant, boggy walk-offs. Finding that magic grip level is like walking a hair-wide tightrope at the top of Camelback Mountain. Unless you're a pro, you won't make it to the other side.

Back to the road course, though. It's not that the ZL1 isn't really, really good on a road course. Its 7:41 Nurburgring time says it is, as does my own first-hand experience. It's even outfitted from the factory with transmission and differential coolers—bits the ZL1's main rival, the Ford Shelby GT500, makes optional add-ons.

Its third-generation magneto-rheological dampers are expertly tuned, with five steps of PTM gradually adding more and more control and even enhancement to the driver's abilities, interacting with damper settings to help alter the car's attitude rather than just relying on throttle and individual brake applications (though it does that, too).  With all of the electronic nannies and aids fully defeated, the ZL1 exposes no inherent flaws, just more willingness to get sideways and light up its tires. The engineers have done amazing things with both the hardware and the software on the ZL1.

Unfortunately, they aren't magicians, and they can't turn the 4,180-pound ZL1 into a light and nimble corner carver. Huge, incredibly grippy 285 mm front and 305 mm rear tires, built to spec and unique to the ZL1, give the car enough grip to perform most of the same feats a lighter car would, but at the end of the day, if you get the ZL1 out of shape, its mass overcomes the friction of the contact patch and becomes a lesson in Newtonian physics like only a truly heavy car can.

OK, so it's a serious performance car with a surprisingly round set of abilities, a few faults, and an extra dose of horsepower, but what's it like otherwise?

Unfortunately, we weren't allowed to drive the ZL1 on the road just yet, but in our low-speed reconnaissance laps and return trips from the end of the drag strip, we got a bit of an idea. It's mostly standard Camaro SS fare: a firm but not too-stiff ride, comfortable seats, and the famously low canopy that drivers and passengers either love or hate.

The interior is trimmed out in somewhat higher-grade materials and with a slightly different look from the SS, and while it's nice—and certainly on-par with the GT500—it's  by no means a luxurious space. Fit and finish are good, but not spectacular; suede elements trade off with cheapish plastic switches. It's clear where almost all of the price of the ZL1 goes: under the hood and under the fenders. We're fine with that.

I still feel a tinge of embarrassment for blurting out the 911 comparison at a table of colleagues and GM engineers, but at the same time, I'm glad I slipped up. The ZL1 is a true driver's car, and regardless of its ultimate pace in comparison with sports cars or supercars in its price, power, or performance categories, it delivers an experience that, at times, is on par with the very best of them.

The ZL1 is the best production Camaro on Earth—ever—even though it's still ultimately "just" a Camaro. There's no shame in that.