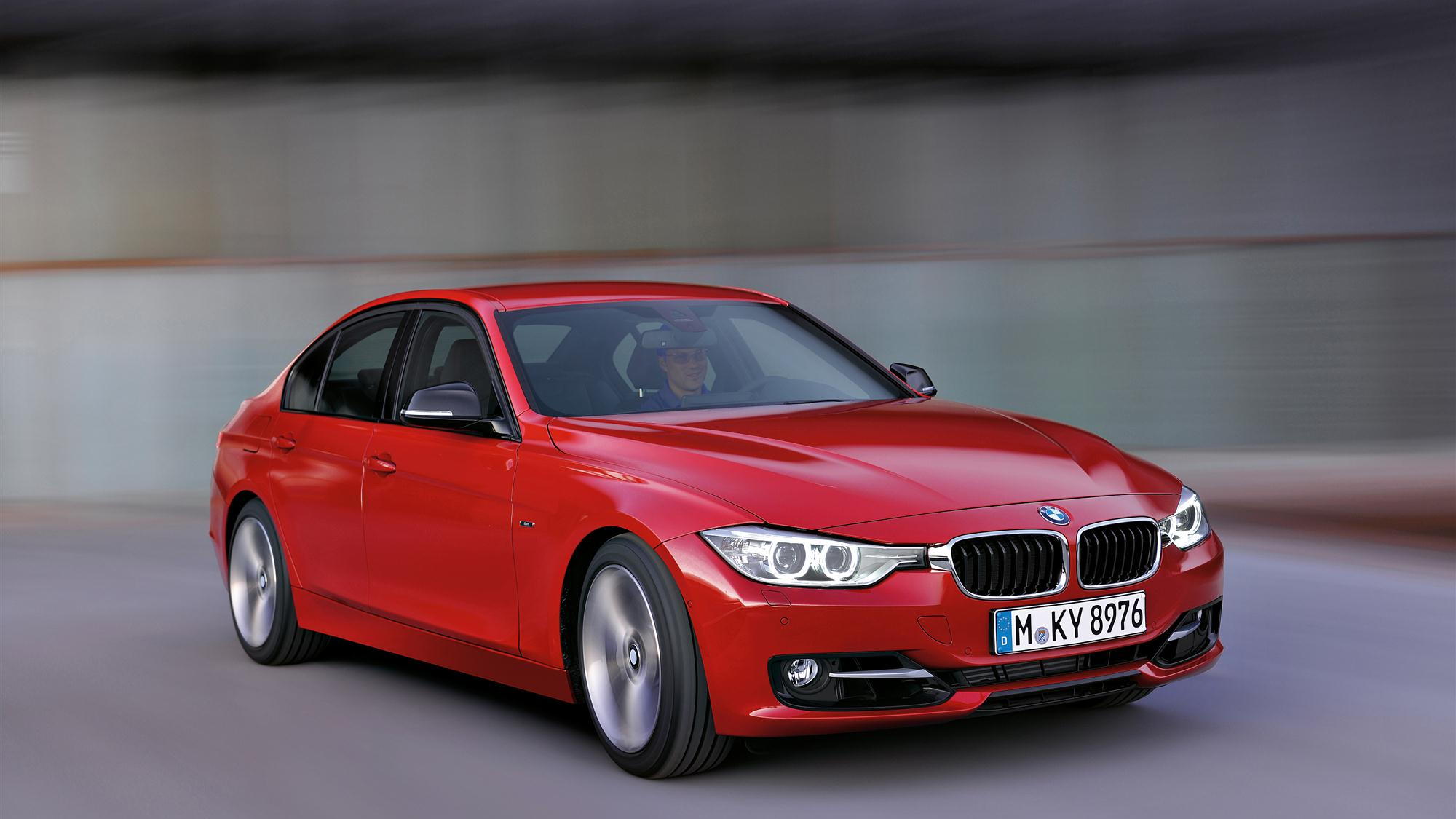 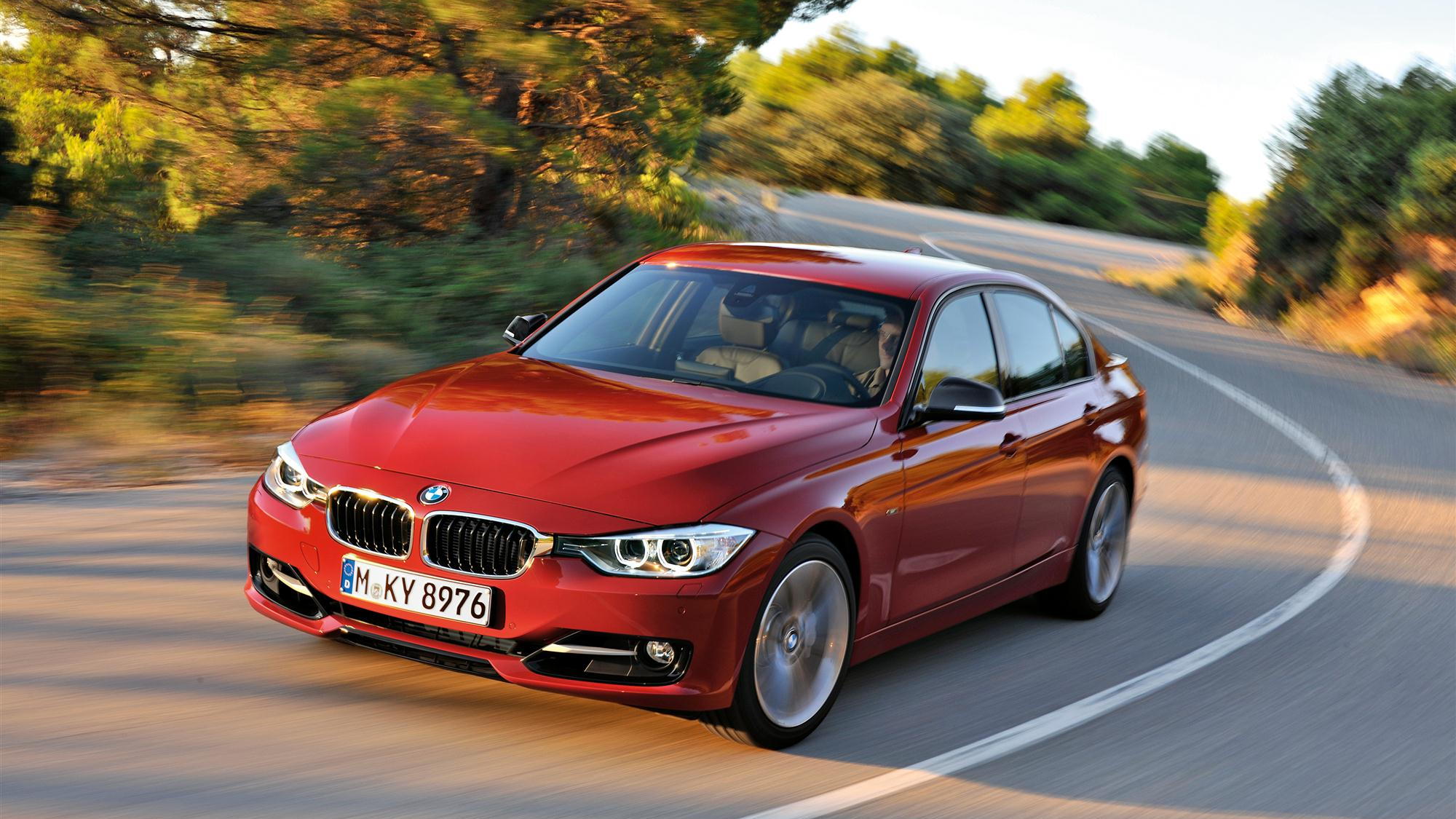 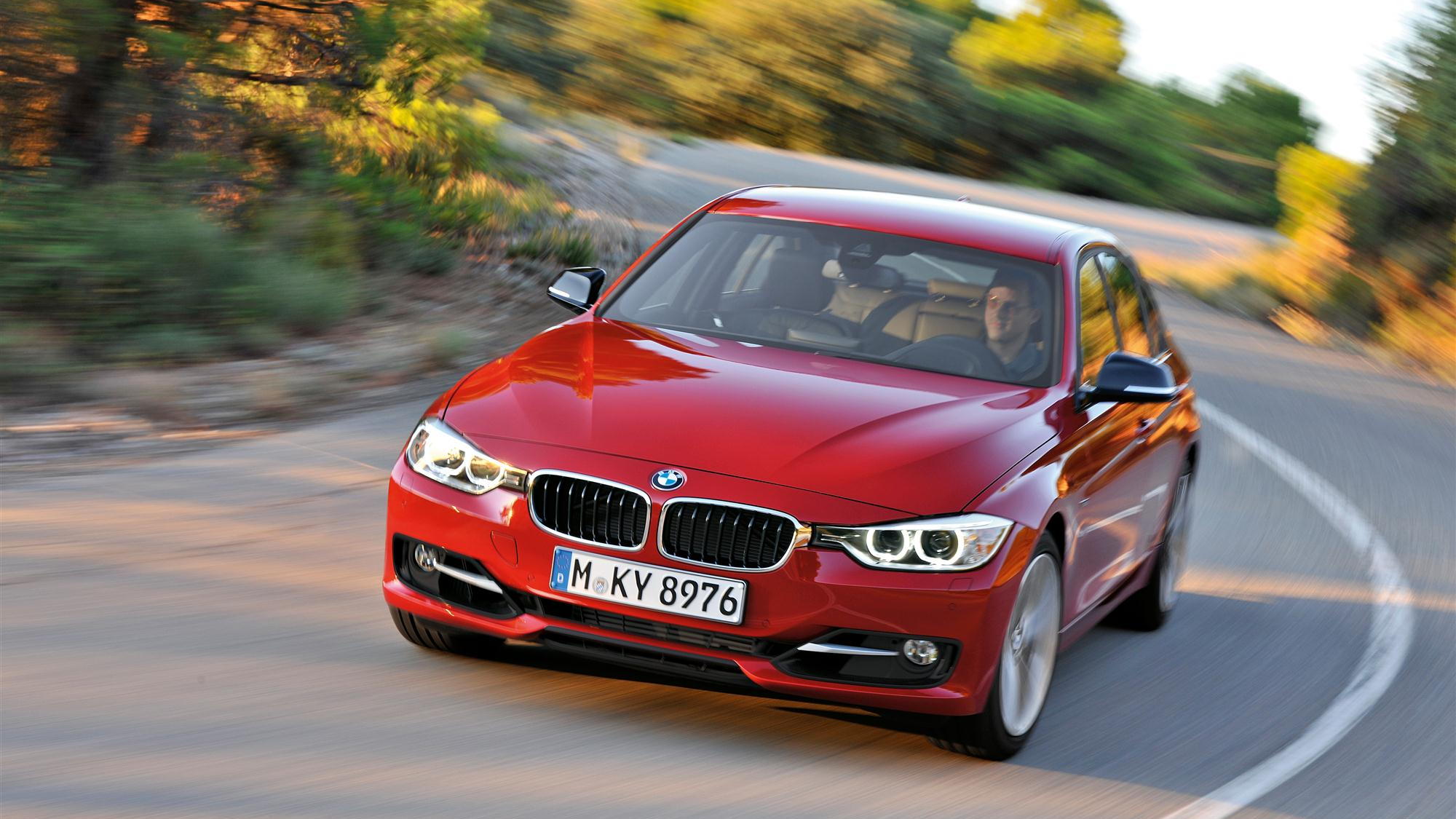 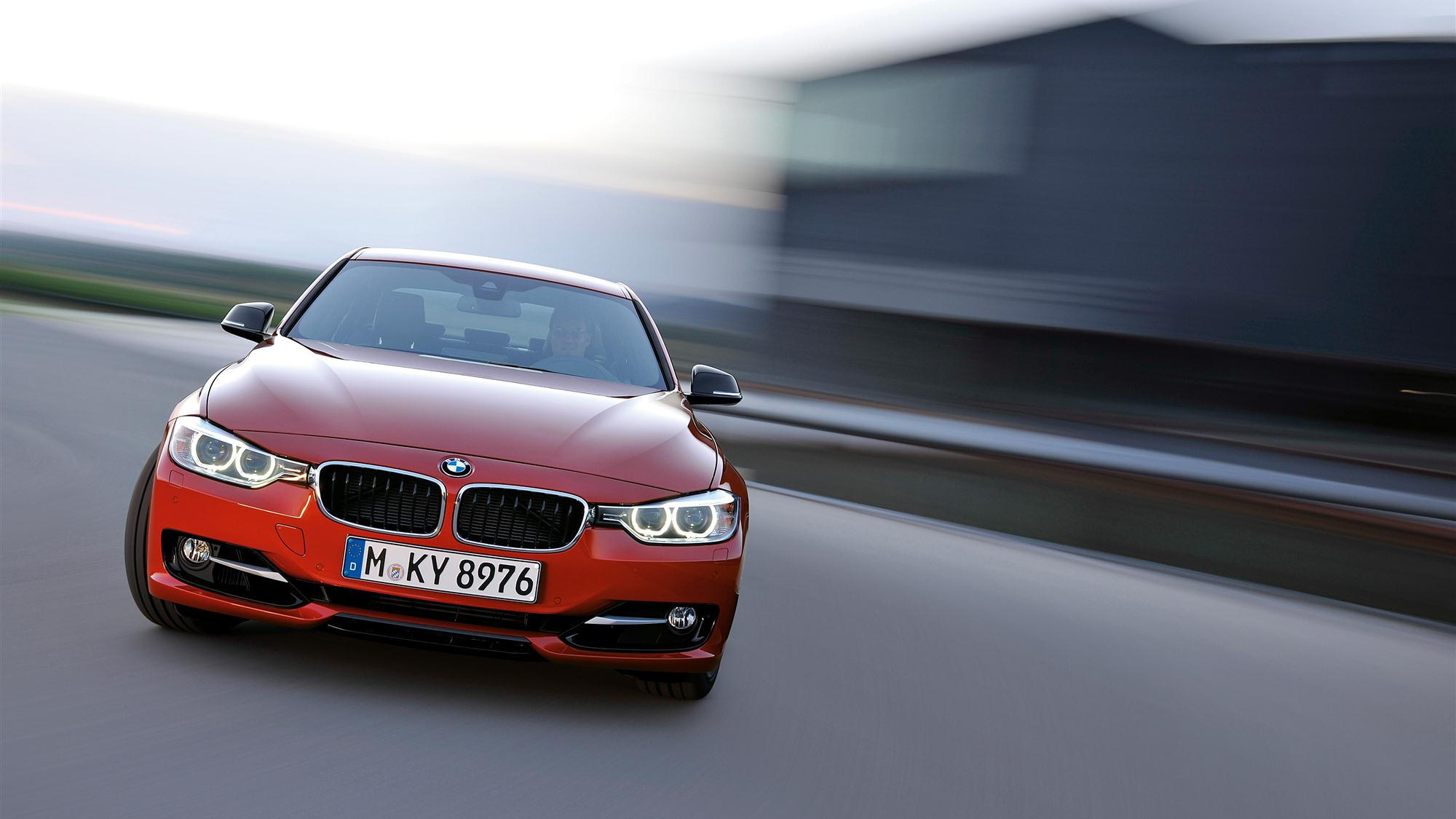 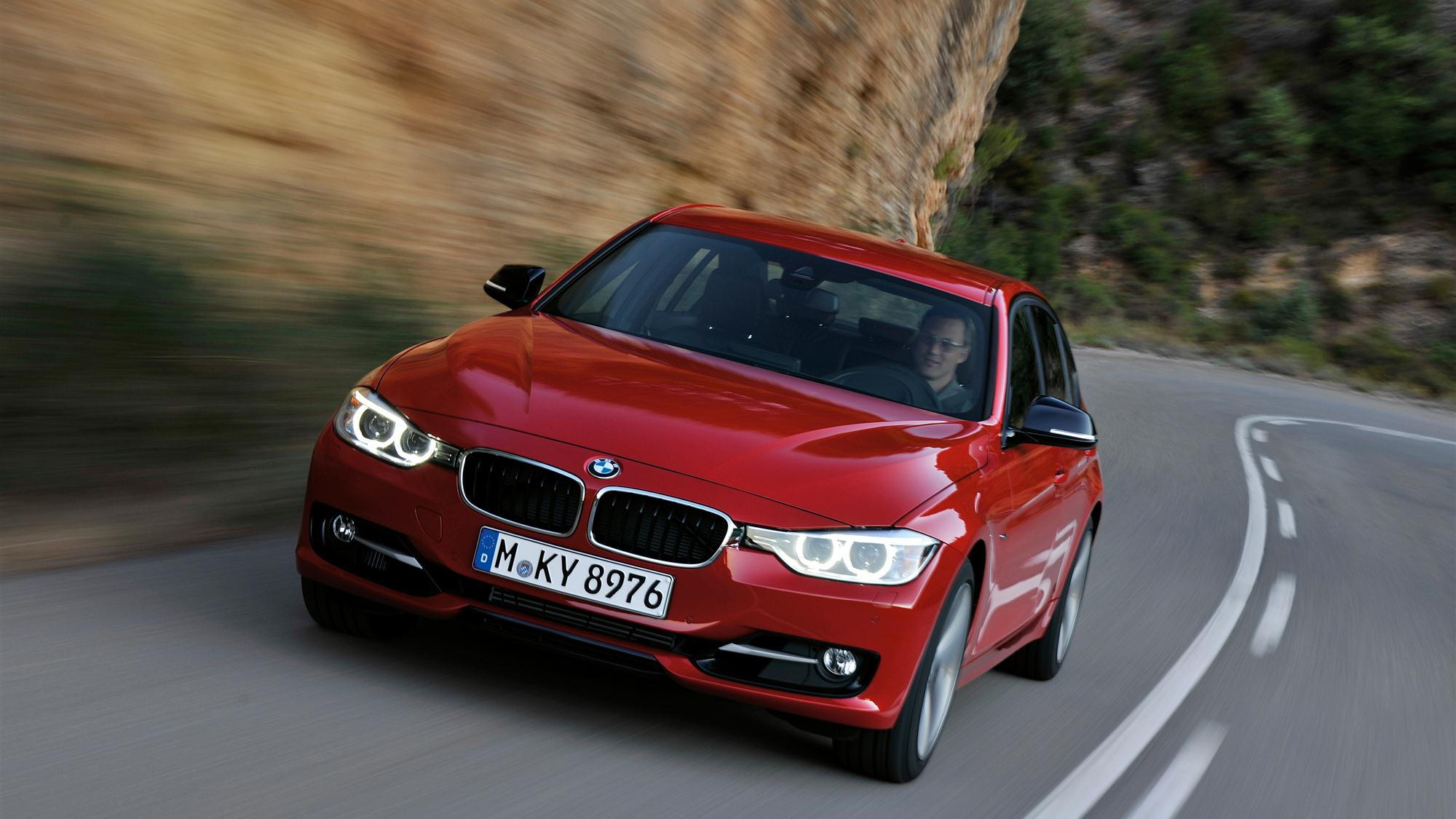 35
photos
BMW’s new 3-Series, the sixth generation of the automaker’s entry-level sedan, is now bigger, bolder, and with a revamped engine lineup including a hybrid option, more fuel efficient than ever.

Set to go on sale in February as a 2012 model, the ‘F30’ 3-Series also debuts BMW’s new face, which features elongated headlights reaching along as far as the trademark kidney grille.

Otherwise, the design is somewhat predictable, with an athletic body, short overhangs, and a long bonnet dominating the look.

As mentioned, the 2012 BMW 3-Series is bigger than the model it replaces, with its wheelbase growing by almost two inches, now measuring 110.6 inches, and its front and rear track measuring in at 60.3 inches and 61.9 inches, up 1.46 inches and 1.85 inches respectively.

Importantly, weight distribution remains an ideal 50:50 split front to rear. Overall weight is down 88 pounds on the outgoing model as well. Most of the extra girth benefits rear seat passengers, which get more legroom as well as shoulder room.

Both engines can also be matched to either a standard six-speed manual or new eight-speed automatic. The auto ‘box features engine stop-start technology and is both faster and more fuel efficient than the manual. Paddle-shifters for pseudo manual control are available with either the Sport Line package or new M Sport Package.

Also aiding efficiency is a brake-energy recovery system used to power ancillary features like the air conditioner. A number of settings available to the driver--“Comfort”, “Sport”, “Sport +” and “ECO PRO”-- through a new Driving Dynamics Control switch will also help them choose between economy and performance driving.

A further button allows the driver to change the DSC settings. Selecting "Dynamic Traction Control" (DTC) mode, for example, makes it much easier to start off on loose surfaces or in deep snow. In this mode as well as in SPORT+ mode, the Dynamic Stability Control thresholds are raised and Dynamic Traction Control (DTC) is activated. It is also possible to shut off DSC altogether. The electronic limited-slip function for the rear differential can then provide extra-sporty acceleration out of corners or hairpins.

The six-cylinder engine featuring in the 2012 BMW 3-Series is BMW’s venerable 3.0-liter ‘N55’ unit and in this latest application develops 300 horsepower and 300 pound-feet of torque, the latter coming on from just 1,200 rpm and staying all the way to 5,000.

It will rocket the luxury sedan from 0-60 mph in just 5.4 seconds and see it easily reach its electronically limited top speed of 130 mph, or 155 mph when equipped with the Sport Line trim.

When equipped with the eight-speed automatic, BMW claims a fuel economy of 32.6 mpg for the slightly more generous European combined cycle. In fact, BMW even claims that owners upgrading to the new model can expect improvements in gas mileage of about 6 and 16 percent for the manual and automatic models, respectively.

Full EPA-rated gas mileage figures will be released closer to the car’s sales launch next year.
ActiveHybrid 3 coming next fall

In this case, BMW has combined its N55 straight-six engine with a hybrid-specific eight-speed automatic transmission with integrated electric motor, which for limited periods can increase power by up to 55 horsepower.

Maximum combined output is 335 horsepower, with a maximum combined torque of 330 pound-feet. BMW says performance is similar to its 335i model but with gas mileage of around 36.7 mpg for the European combined cycle.

For BMW’s setup, the electric motor supplies the engine with supplementary driving power and can provide a boost function when more power is required, such as overtaking or accelerating up a hill. It also has an electric only mode that can carry it for 2.5 miles and at speeds of up to 37 mph without any emissions.

Note, during overrun and braking, the electric motor acts as a generator, converting kinetic energy into electrical energy, which is used to charge the lithium-ion battery stored in the trunk.

Aerodynamics also plays an important part in the 2012 BMW 3-Series’ overall efficiency. On the far left and right of the main ducts situated in the front bumper are small vertical intakes which help create an “Air Curtain”. This new technology improves air flow around the front wheels, enhancing aerodynamic efficiency and reducing fuel consumption at higher speeds.

The end result is a very low drag coefficient of just 0.26 cd.More comfort and safety than ever thanks to ConnectedDrive

BMW ConnectedDrive is an umbrella heading

for a suite of new technologies and features coming to BMW’s cars. They offer new driver assistance technology and mobility systems as well as advanced safety features.

In the new 2012 BMW 3-Series, either as standard or an option, drivers can look forward to a color heads-up-display, a camera based surround view monitoring system, a parking assistant, as well as active blind spot and lane departure warning systems, collision warning, and a navigation system with real-time traffic information (RTTI).

Like most BMWs, the cockpit is angled towards the driver for easy reach of the controls. The cockpit’s four circular dials (fuel gauge, speedometer, tachometer and oil temperature gauge) come with a black panel display. Positioned on the horizontally-structured instrument panel is the freestanding iDrive display.

Positioned centrally on the center console within easy reach of both the driver and the front passenger is the standard iDrive controller.

The car’s larger dimensions ensure rear passengers are welcomed by 0.71 inches of extra legroom inside the doors as they climb aboard. Behind the fully contoured front seats, 0.6 inches of additional knee room and 0.31 inches of extra headroom further enhance the passengers’ comfort.

Storage space is a reasonable 17 cubic-feet, up 0.7 cubic-feet on the outgoing model. Worth mentioning are the 40:20:40 split rear backrests, which should prove very handy for those trips to Ikea. Another cool feature is the hands-free trunk lid opening function, which requires just a wave of the foot under the trunk similar to what Volkswagen’s European Passat has.M Sport Package and xDrive add to the fun

And for those in snowy climates, BMW offers its all-wheel drive xDrive option. In addition to the typical benefits of all-wheel drive, the electronically controlled xDrive system--which can fully vary the power split between the front and rear wheels with split-second speed--ensures surefootedness in the wet or snow.

The M Sport Package and xDrive option will be available next summer.

Another performance option is a new variable-ratio steering system. This system provides different steering gear ratios depending on the turning situation, so that the car responds either more directly or more softly to the driver’s steering inputs.

This reduces the number of steering wheel rotations required for bigger turns by up to 25 percent and makes for easier, more convenient parking and turning since less effort is required from the driver. The best part is that the variable-ratio steering is a purely mechanical system, meaning you don’t have that lack of feel many electronic systems can have.

Look out for the 2012 BMW 3-Series’ showroom appearance early next year and stay tuned for our first drive report.

While you wait for its arrival, click here to read up about the new high-performance M3 variant that’s still in the works.

Also, click here for our mega-gallery of all the different 2012 BMW 3-Series model lines.