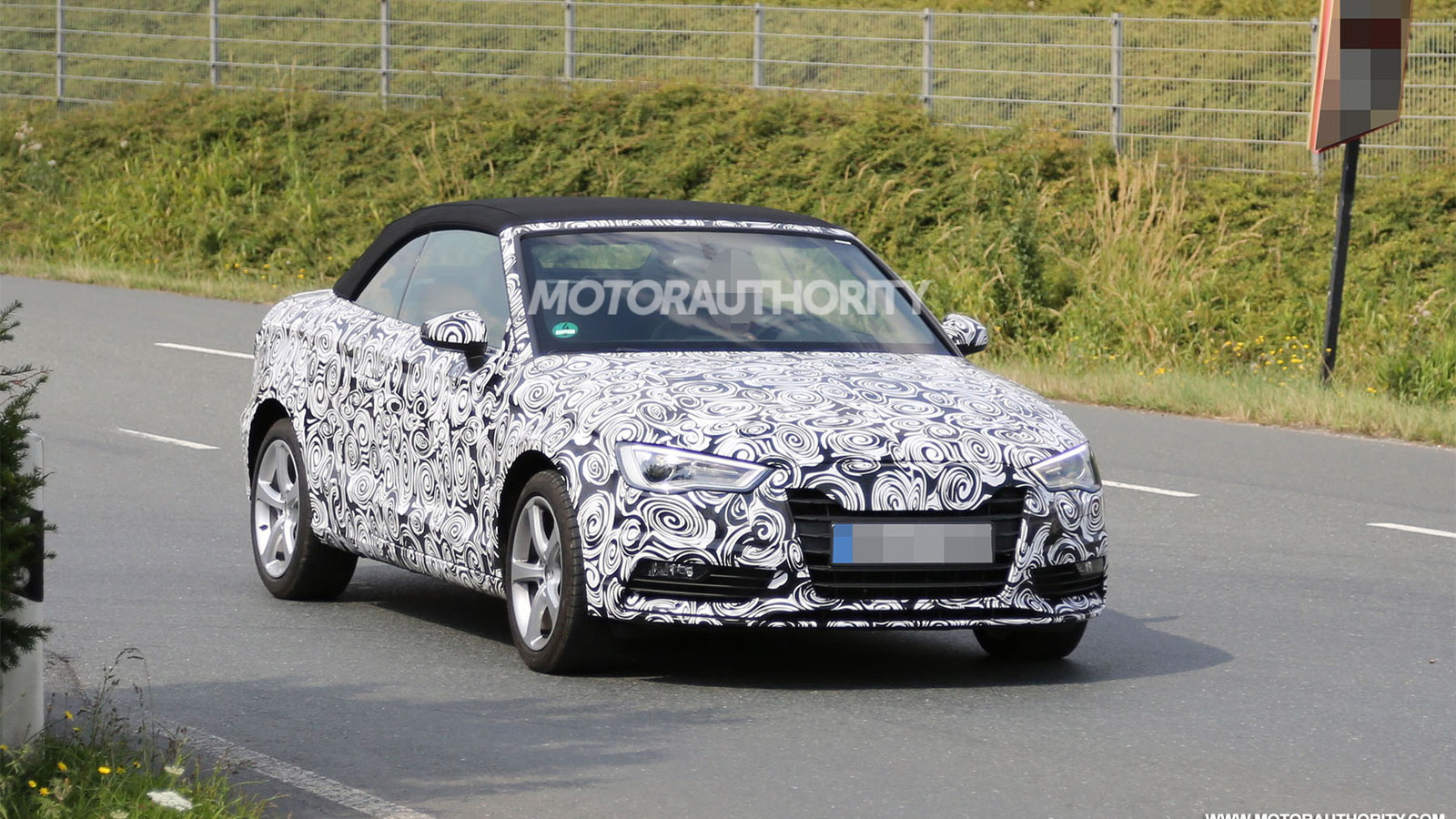 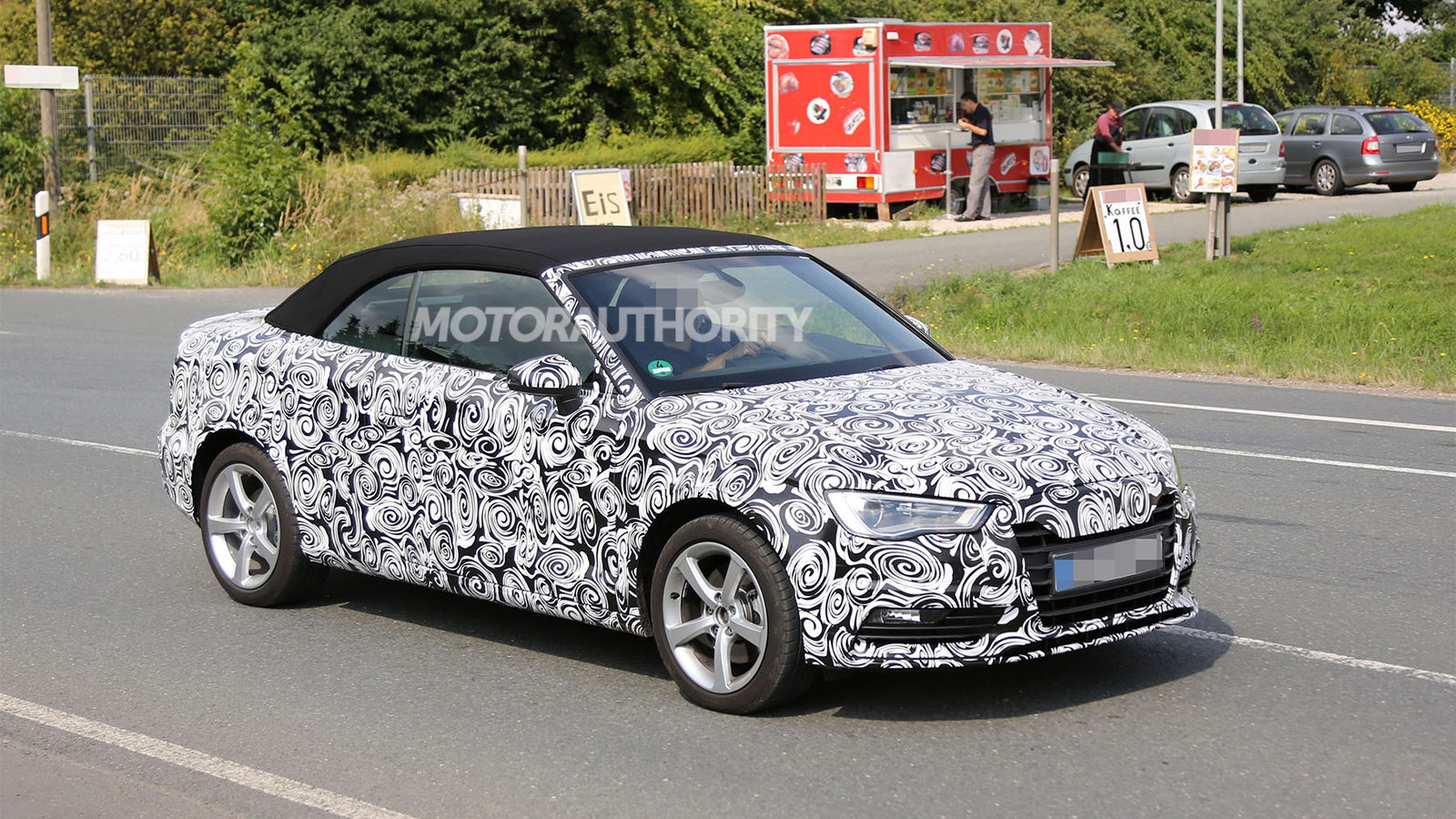 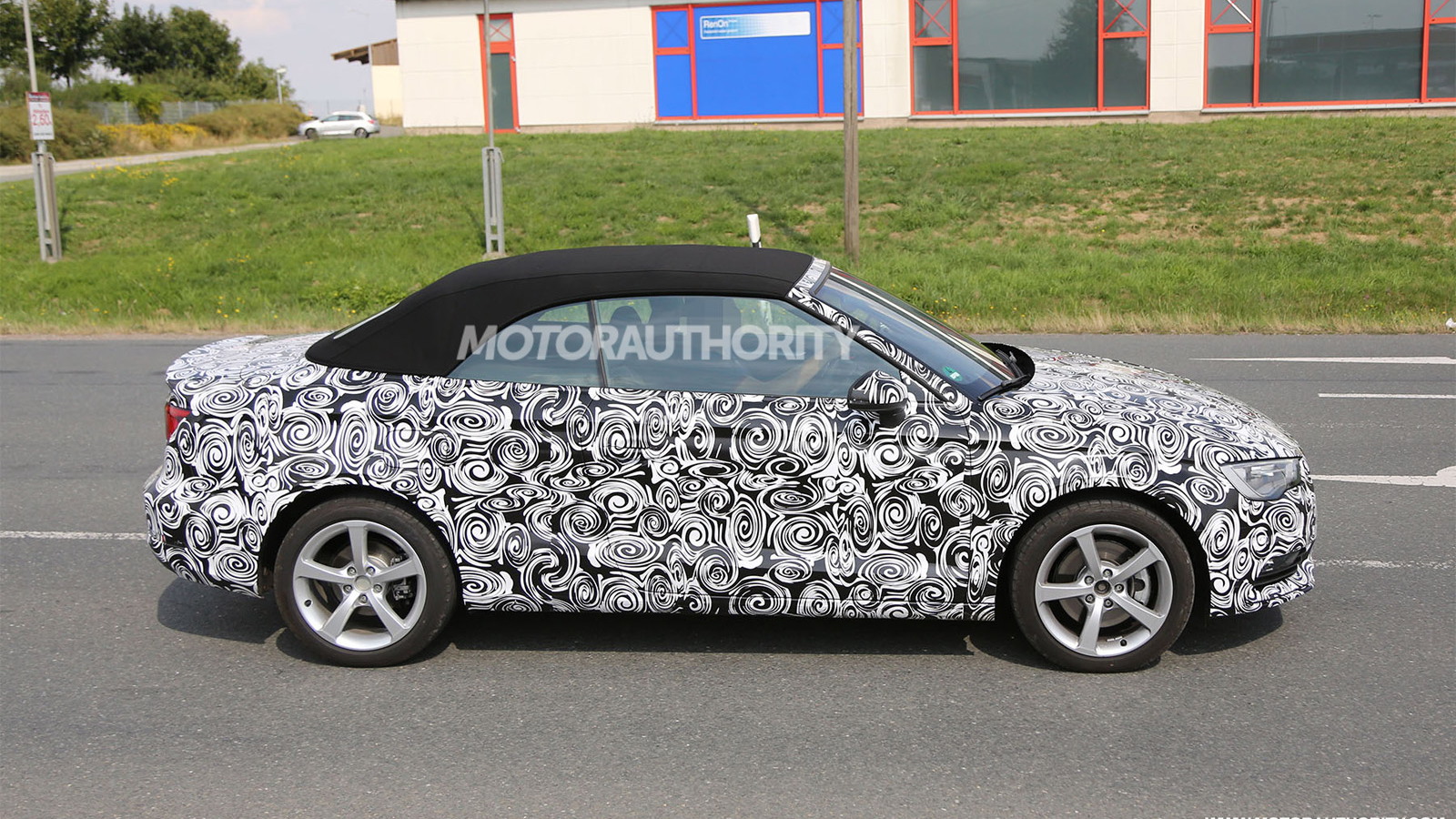 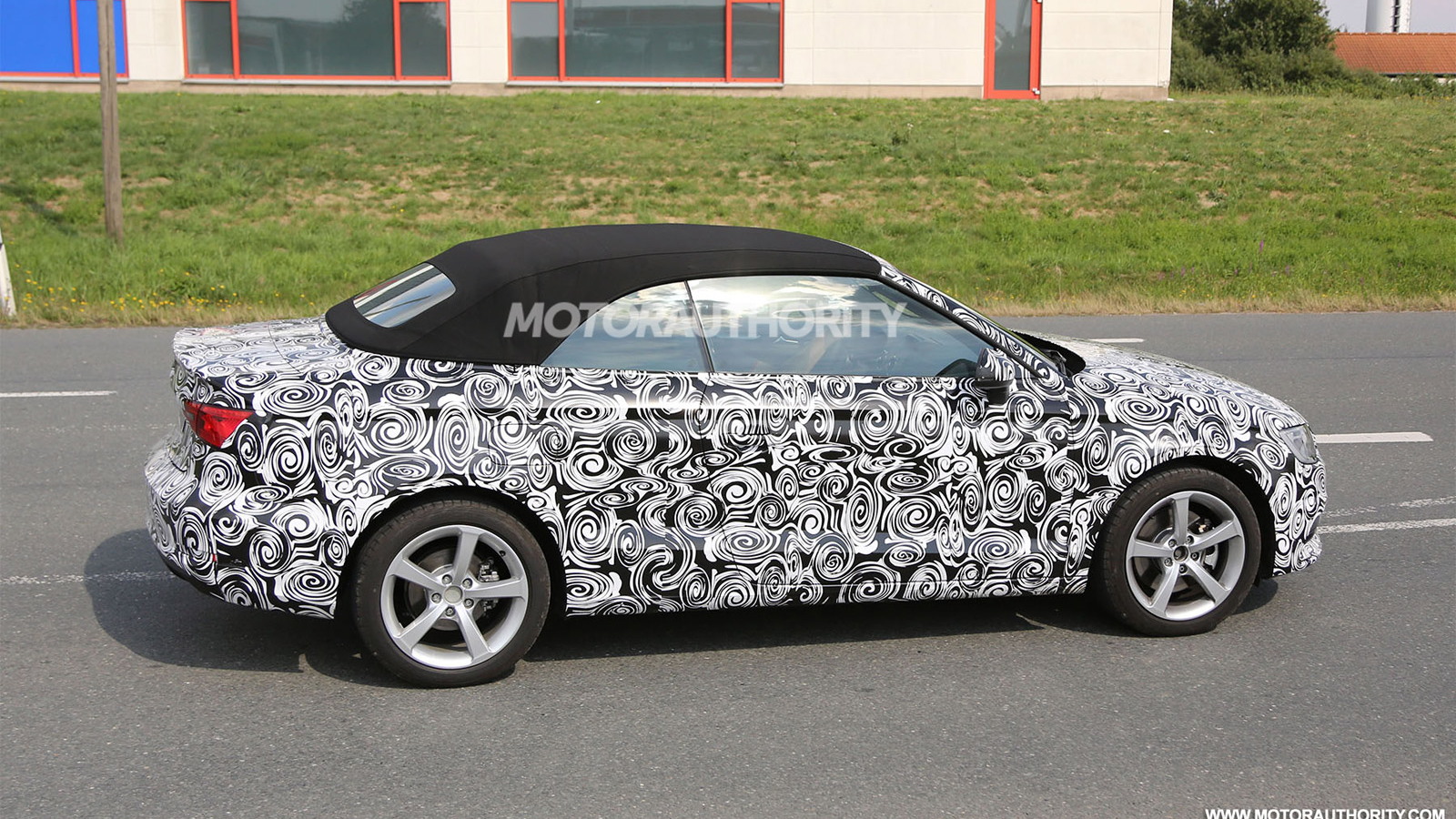 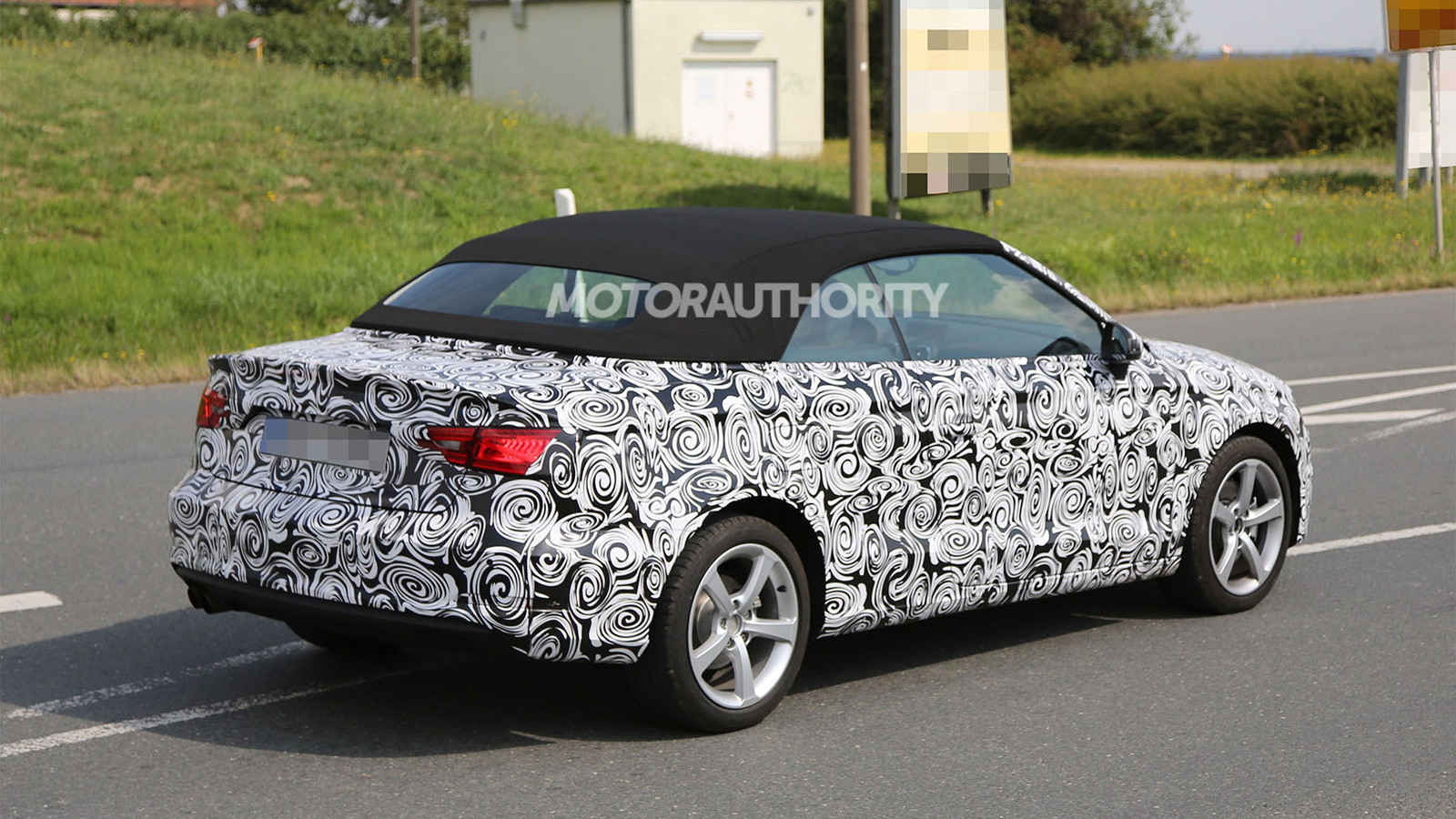 23
photos
The all-new 2015 Audi A3 compact has already been revealed as a three-door Hatch, five-door Sportback and four-door sedan. Now we have a new batch of spy shots of an upcoming fourth variant, the A3 Cabriolet.

Audi’s new A3 arrives on U.S. shores early next year in Sportback and sedan bodystyles, and hopefully we'll see this convertible variant not long after. While the former A3 Cabrio was never sold locally, there’s a good chance this new model will.

That's because the car’s only direct rival would be the upcoming 2-Series Convertible from BMW, which replaces the current 1-Series Convertible. And, with many buyers in the luxury market looking for smaller and more fuel-efficient vehicles, the new A3 Cabrio could prove a popular alternative.

The A3 Cabrio will be virtually identical to the A3 Hatch, A3 Sportback and A3 sedan up until its A-pillar, after which most of its sheet metal will be unique. Its overall length will be similar to that of the A3 sedan, which measures in at 176 inches in length. Underpinning the car is the Volkswagen Group’s flexible MQB platform, which also underpins the 2015 Volkswagen Golf and the rest of the A3 range.

A key advantage of the MQB is lightweight design, which should make the new A3 Cabrio more fuel-efficient as well as more dynamic than the outgoing model. The car’s MQB platform has also been developed around a range of fuel-efficient drivetrains.

Transmission options will include a regular manual, as well as automatic and S tronic dual-clutch units, depending on the model. Customers will also be able to choose from front- or all-wheel drive as well as either xenon or full-LED headlights. Note, the S3 Cabrio will come standard with quattro all-wheel drive.

Inside the new A3 Cabrio, owners will find nice round dials and air vents, plus plenty of leather. Audi's latest MMI interface system will handle the media and navigation functions, with displays of either 5.8 or 7 inches available. 4G LTE broadband connectivity should also be offered. Pictured below is the interior from the A3 sedan, which gives you an idea of what the new A3 Cabrio's cabin will look like.

Stay tuned for updates as development continues, and look for a reveal of the new Audi A3 Cabrio at the 2013 Frankfurt Auto Show, with sales to commence early next year.