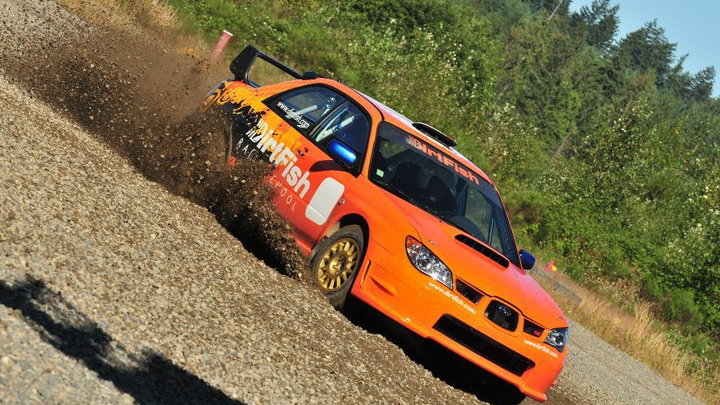 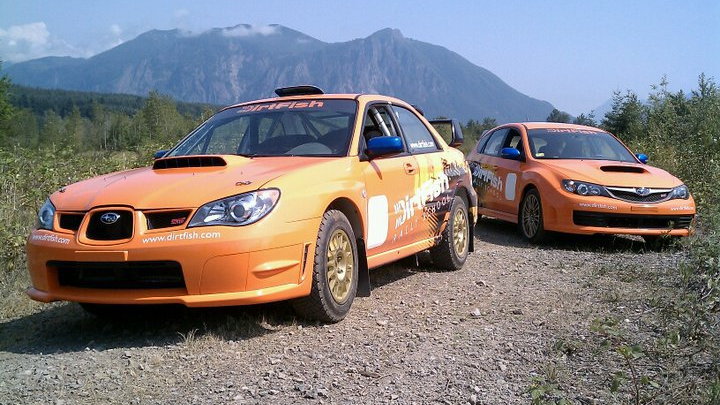 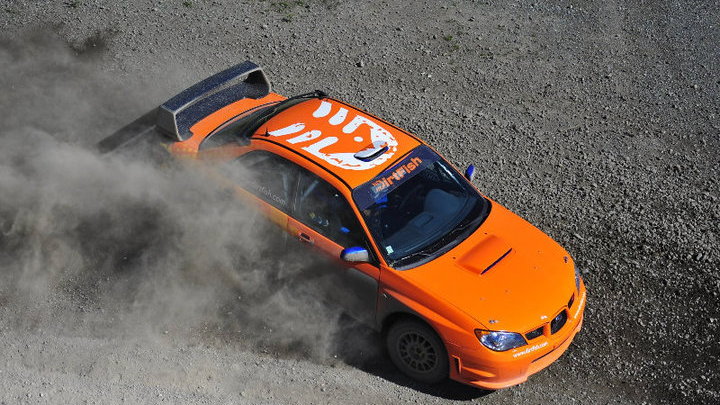 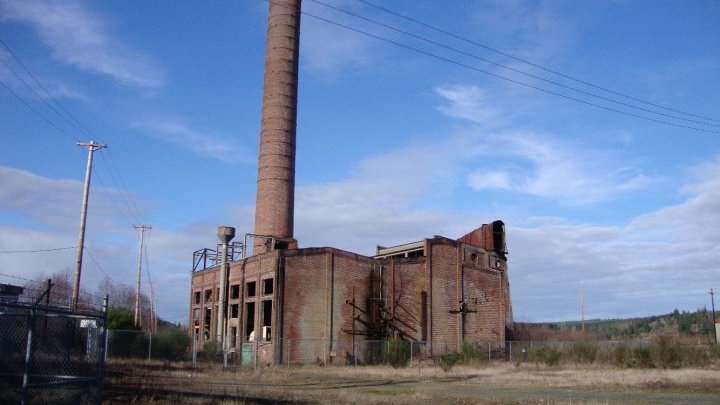 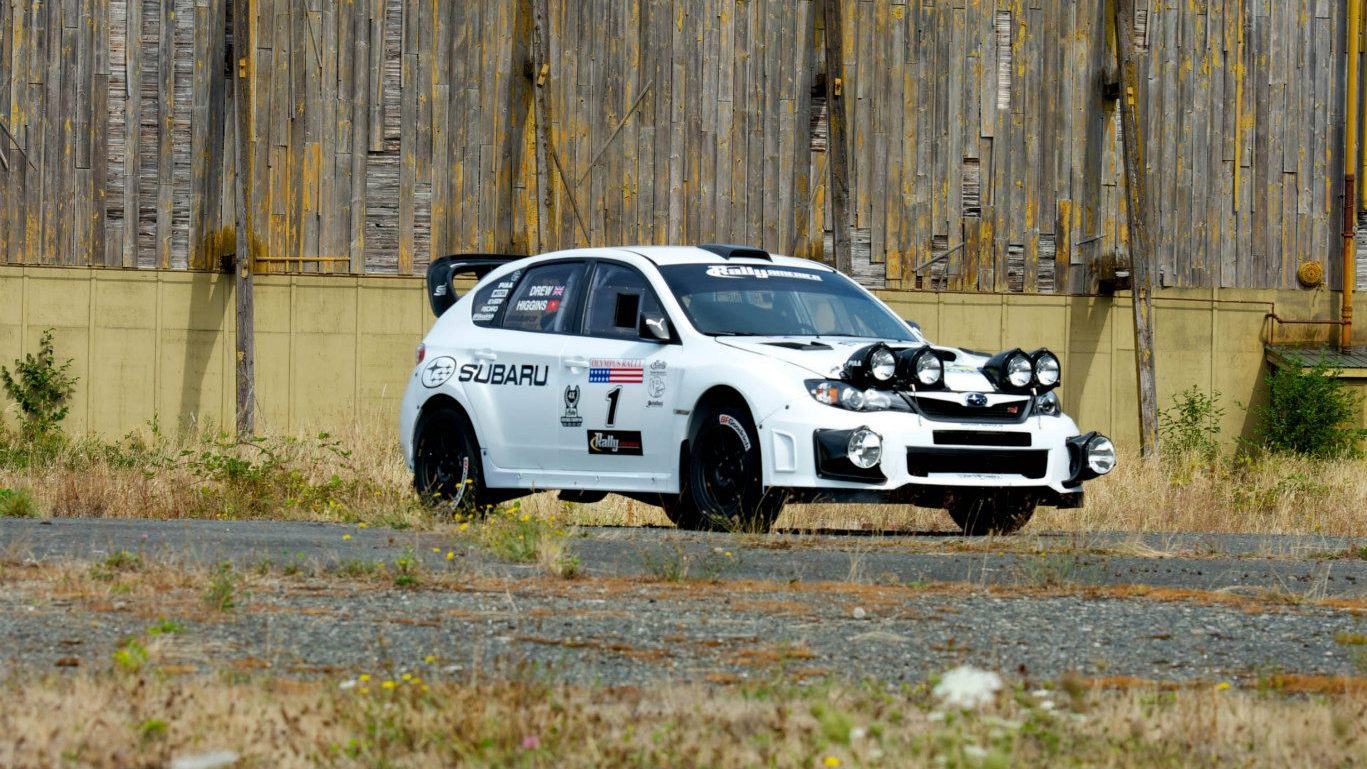 23
photos
David Higgins is, if you're not familiar, the 2012 RallyAmerica National Champion driver (along with co-driver Craig Drew), and the lead wheelman in Subaru Rally Team USA's efforts. He's therefore, by definition and demonstration, one bad-ass driver.

But in rally, it's not all about the driver (or even the co-driver). It requires a car that can let the driver exhibit his skill and nerve. In Higgins' case, that car is a heavily modified Subaru WRX STI hatchback. Even with a complete floor pan, carbon body panels, custom suspension, modified engine, sequential transmission, and much, much more, it's still a production-based car--the chassis is the same one that rolls off the line and goes into every WRX STI--sans cage, fire equipment, and race seats, of course. Just riding along in this car is a blast--and with Higgins at the wheel, it's a thrill ride.

With that base covered, it's back to being all about the people inside the car, and that's where DirtFish Rally School comes in. We've all played the games on our favorite console, and we've all watched the (limited, spotty) U.S. coverage of the World Rally Championship on TV, but it's a big leap moving from there to doing it in real life.

A huge leap, in fact. Made even bigger if you've ingrained a great deal of "grip" driving skills doing things on paved courses for time. Those skills are not only unhelpful in the gravel and dirt, they're counterproductive.

You see, as my patient instructor at DirtFish and Continental Tire Sports Car racing driver Aleks Altberg, informed me, in rally, doing it right is almost exactly doing it wrong on pavement. Instead of braking, then turning, then accelerating (which just ends up in massive understeer or very slow times on gravel), you accelerate, turn in, then use the brake to help control the turn, usually with the wheels close to straight. In advanced forms, you do this while on the gas at the same time.

I didn't get that far in the half-day course.

What I did get, however, was a killer fun time and a good introduction to the skills and the feel of sliding a car around a rally course. Naturally, the cars used for the school are Subaru WRXs, gutted and caged and with the brake boosters stripped out, but otherwise nearly stock, though built as rally cars by Vermont Sports Cars. They're surprisingly capable and shockingly durable--and tremendous fun.

Fun, of course, is the operative word with rally. As you may recall from my harrowing, thrilling run as a co-driver in the 100 Acre Wood in 2010, there's really no reason anyone would engage in rally if it weren't, ultimately, just about the most fun a person can have. It's hard physical work, often in remote and desolate places, and, at times, it's terrifying. The fun overrides that, for those of a certain mindset, at least.

At DirtFish, that sense of fun is never lost--even as you understeer off the outside of a turn and mow down a line of cones. If anything, the mistakes make it even more fun, and more rewarding, when you finally get it right and feel the magic of a 3,000-pound car sliding on the super-slick, damp gravel of the training course at 40-50 mph, seemingly out of control, but doing exactly what you've asked it to do.

While a half-day is definitely not enough time to really learn how to handle a rally car, DirtFish does offer longer one-, two-, and three-day courses for those looking to really get a handle on the sport and build up their skillset. There's even a rallycross course for those who think banging fenders and clearing jumps sounds like even more fun. Best of all is the pricing: DirtFish courses cost a fraction of what you'd spend on a road course-based racing school, running from $650 for the half-day course to $3,250 for three days of advanced techniques training.

If you want to learn how to really do it in the dirt, in the real world, DirtFish is a great place to start.

Subaru provided airfare, meals, and accommodation so that we could bring you this report.