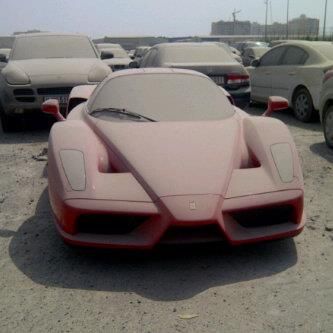 Remember the poor Ferrari Enzo supercar abandoned in Dubai that we reported on last August?

Well, it’s still sitting in the same police impound lot we last saw it in, but it may have a bright future ahead.

The Enzo, along with several other exotics, is to be auctioned off in what the Daily Mail, via Jalopnik, claims is the most expensive police sale in history.

The person who abandoned the car is believed to be a British citizen who leased the Ferrari and then fled Dubai 20 months ago when they couldn’t afford the repayments and traffic fines.

It’s not uncommon to face jail time in Dubai for outstanding debts so we tend to see some financed vehicles abandoned, either at airport car parks or even the owner’s former place of residence. However, it’s extremely rare--and sad--to see something like a Ferrari Enzo left abandoned.

Other cars seized by authorizes in Dubai and set to be auctioned include some that were stolen and others that were abandoned after they were involved in accidents. Under local laws, any car left for more than six months becomes property of the state unless a clear title can be produced and there are no outstanding fines.

Ferrari Enzo supercars, of which only 399 were built for public sale, typically fetch up to a million dollars or more on the open market. It’s not clear how much this example will go for, though it should still be a princely sum despite the poor condition the car must be in.

The auction takes place this Wednesday in Al Quasis, Dubai, so stay tuned for an update once the results are in.