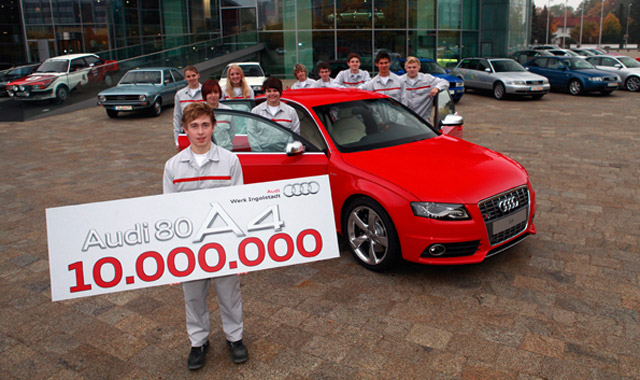 Coinciding with the reveal of its facelifted 2013 Audi A4 range, the automaker from Ingolstadt has announced that it’s reached a new milestone concerning its popular mid-size model.

Factoring in the original four generations of the Audi 80 first launched in 1972, plus the four-generations of its successor, the A4, Audi can now lay claim to building its 10 millionth mid-size car.

The particular model was a 2012 Audi S4 finished in Misano Red, which rolled off the line at Audi’s secondary plant in Neckarsulm, Germany, earlier this month.

As mentioned, four generations of the Audi 80 had been produced since the first cars starting rolling off the line at Audi’s main plant in Ingolstadt, also in Germany, between 1972 and 1994. It was then replaced by the Audi A4.

The A4 is currently in its fourth generation and is known internally as the B8, which incidentally represents a continuation of the Audi 80 lineage. Thus the first A4 was designated as the B5-series, followed by the B6, B7, and the current B8.

Some of the innovations introduced over the 39 year history of the Audi 80 and A4 include the quattro drivetrain with self-locking differential, fully galvanized vehicle bodies, S tronic dual clutch transmissions, and the more recent torque vectoring sport differential.

Note, earlier this year Audi celebrating building its five millionth A4, a sedan model that also happened to be finished in Misano Red.