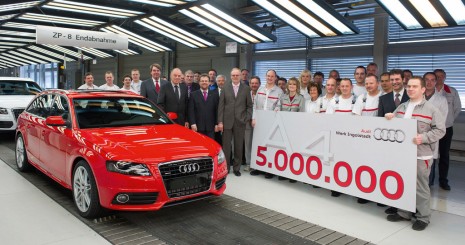 Five-millionth Audi A5 is built

Since the introduction of the first Audi A4 back in 1994 (albeit the A4 is essentially the original Audi 80 renamed), more than five million cars bearing the A4 name have rolled off Audi production lines in Ingolstadt and Neckarsulm in Germany. The five-millionth model was a ‘Misano Red’ 2.0 TFSI quattro model, which will be going to a customer in Germany.

As mentioned, Audi began production of the A4 model line at its Ingolstadt site in 1994, and since 2007 has also been building the cars at Neckarsulm. Today the A4 Sedan, A4 Avant, A4 allroad quattro, S4 Sedan and S4 Avant are all manufactured in Ingolstadt, while the Neckarsulm site is only responsible for the A4 Sedan.

The A4 is currently in its fourth generation and is known internally as the B8, which incidentally represents a continuation of the Audi 80 lineage. Thus the first A4 was designated as the B5-series, followed by the B6, B7, and the current B8.

During its lifetime, the A4 range also spawned stylish convertible models as well as the awesome RS4, which in its last iteration packed a sweet high-rev V-8 engine. There’s good news for fans as we’ve posted spy shots of a test-mule for a new-generation of the RS4, and this one is expected to land in the U.S. in late 2013 in either Sedan or Avant wagon bodystyles.