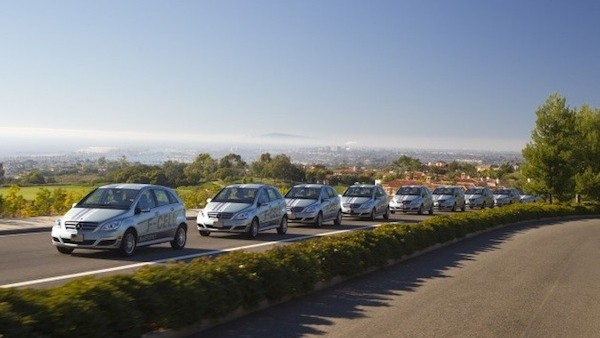 While the interest in hydrogen powered fuel cell vehicles has waned lately, due mostly to the recent proliferation of battery powered electric cars and plug-in hybrids in the media, some automakers including industry giant Daimler are still backing their cause.

In fact, Daimler has just announced the development of its own hydrogen fuel cell stack and plans to start building them at a new plant in Vancouver, Canada. Daimler has already shown off a handful of fuel cell vehicles, including its Mercedes-Benz B-Class F-Cell, which is already conducting real world trials in the U.S. However, these were earlier vehicles and came powered by fuel cells designed and built by outside suppliers.

The decision to establish the new facility in Canada stems from a partnership Daimler has formed with Canada’s Automotive Fuel Cell Cooperation and Ballard, as well as rival automaker Ford. The aim of the new operation is to cover the entire value chain, from materials research and development of a production fuel cell for a large-scale use.

Construction of the new plant will begin immediately at a site in Vancouver. Completion of the production facilities is scheduled for early 2012, with the first actual stacks set to roll off the line in 2013.

Importantly, this new generation fuel cell stack will be smaller yet have a higher output and efficiency than current designs. It will also be suitable for use in sedans such as the Mercedes-Benz C-Class or E-Class, suggesting that Mercedes-Benz models of the future may include a hydrogen powered fuel cell option in addition to battery powered electrics and internal combustion engines.