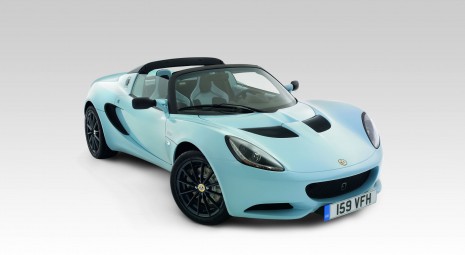 The Lotus Elise, once one of Lotus' only two production cars, is now the last of its former breed. Today it gets a new Club Racer variant, due to debut at the 2011 Geneva Motor Show.

Taking the philosophy that gave the company legendary status (if not blockbuster sales) to even greater extremes than the standard Elise, the Club Racer shaves pounds eveyrwhere possible to get a full 50 pounds out of the already-sub-2,000-pounder it's based on.

How did they cut the weight? By using a motorsport-derived lightweight battery, deleting the noise insulation, and practicing gram strategy everywhere else.

More interesting, however, is the first-ever implementation of Lotus' Dynamic Performance Management (DPM) system in the Elise. Basically an advanced, performance-focused stability control system, it helps newer track drivers learn the game with less risk, and can be completely disabled for the experienced.

As Lotus chief technical officer Wolf Zimmerman put it, " “The traditional Lotus approach of reduction and purity has lead to one of the most zeitgeist and contemporary sports cars around... The new Club Racer will definitely give these people something extra to get their teeth stuck into. This car epitomises everything that’s cool about the Elise – it’s fast, raw, responsive and a huge amount of fun to drive.”

The Elise Club Racer is available in six colors, and features Eibach springs on Bilstein dampers. It will be available in Europe, but it's not yet clear if the U.S. will get the 1.6-liter-powered track/street special. Look for more details when it hits the Lotus stand in Geneva in a few weeks.