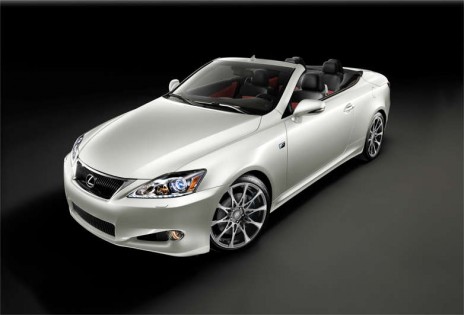 Special editions are a car company's way of squeezing extra profit from certain models. For example, Ford became somewhat infamous for the practice after it introduce "special edition" Mustangs one after the other a couple of years ago. It's an effective tool, though. Customers like anything with "special edition" added to it, and the cars usually get snapped up quickly.

Lexus is no stranger to the special edition game, and it has dusted off the old sales ploy with a new version of the IS 350C hardtop convertible, the IS 350C F Sport Special Edition.

So what makes it so special? Well, first Lexus takes a loaded IS 350C complete, with navigation and all the other goodies you'd probably check on the option sheet. Then it adds Bilstein shocks, springs that lower the IS an inch all around, stiffer anti-roll bars, and 19-inch alloy wheels wrapped in Michelin Pilot Sport tires. Xenon lights with LED accents are standard, and special red and black leather seats and badges are also part of the package. Available in Starlight Pearl (white) or Obsidian (black), only 175 will be made, at a cost of $55,120, not counting the $875 destination charge.

I'll give credit to Lexus for actually making some substantive changes to the IS 350C in this special edition. The suspension changes are nothing to laugh at, and although I obviously haven't driven this version, it's a good bet that the convertible's reflexes will be enhanced. it also helps add a little more credibility to Lexus' drive to be taken seriously as a manufacturer of sporty vehicles. it's too bad you can't get one with a stick, but hey, convertibles are for cruising anyhow, right?