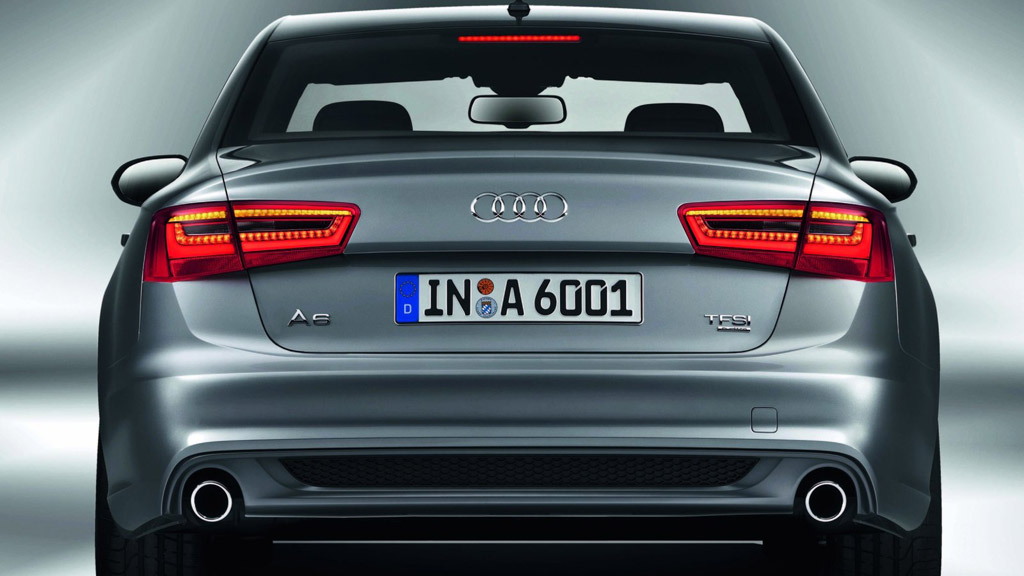 30
photos
The new 2012 Audi A6 has been revealed in all its glory, showcasing a design that’s now become quite familiar as the new sedan is essentially a smaller version of its A8 sibling. However, there are a few unique elements to keep things interesting and as with any Audi, much of the excitement is due to what’s under the sheet metal.

Much of the body of the new Audi A6 consists of aluminum and high-tech steels, making it light, stiff and safe. Advanced construction techniques and special hydraulic damping in the axle and drivetrain bearings all help to reduce noise, vibrations and harshness, all of which should result in one of the smoothest rides in the executive segment.

Overall measurements come in at 16.14 feet in length, 6.14 feet in width and 4.79 feet in height. The long engine hood, the low, sweeping roofline and the prominent lines on the flanks create a dynamic overall appearance. Optional LED headlights emphasize the striking expression at the front.

Inside, there’s a wraparound dash with a custom inlay that surrounds the driver and front-seat passenger. As an option, the front seats can be equipped with ventilation and massage functions. Classy ambient lighting in the lighting package provides small points of light throughout the interior.

The new car also features a highly efficient automatic air conditioning system and the latest-generation MMI radio operating system as standard. Additionally, Audi also offers an optional head-up display.The MMI touch operating system is also available as an option. This enables much of the hard-drive MMI navigation plus system to be controlled by means of a touchpad, just like in the 2011 Audi A8.

The online services, developed though a partnership between Audi and Google, connect the sedan to the Internet via the Bluetooth car phone online. A UMTS module pulls images and information from Google Earth up on the monitor and integrates them with the navigation route. A WLAN hotspot provides contact to mobile terminals on board. The top of the hi-fi line is a Bang & Olufsen sound system.

The new A6 range starts with five powerplants generating between 177 and 300 horsepower of output: two gasoline engines and three TDI units. Throughout the entire model line, fuel consumption in the A6 has decreased by up to 19 percent compared to the previous model. And, in terms of consumption figures, Audi claims the A6 wilil outperform its competition.

The Audi A6 Hybrid will follow at a later date; it combines the power of a large V-6 with the fuel efficiency of a four-cylinder unit. This is the same unit previewed in the upcoming A8 Hybrid, and consists of a 2.0-liter TFSI engine paired with an electric motor to deliver a combined output of 245 horsepower and 354 pound-feet of torque. Either the 45 horsepower electric motor or the 211 horsepower four-pot can propel the car, the end result being an estimated average fuel consumption rating of 37.94 mpg.

A number of drivetrain options are also available. The Audi drive select dynamic handling system for all TFSI and TDI versions has been expanded to include an additional mode--the “efficiency” program. Depending on the model, cars will come with either a six-speed manual, the multitronic continuously variable transmission (CVT) or the sporty S tronic dual clutch option.

Models come with either front-wheel or quattro all-wheel drive, the latter featuring a crown-gear center differential and torque-vectoring function. For models equipped with the top-of-the-line engines, Audi will offer an optional sport differential.

The chassis of the new A6 combines sporty precision with comfort. Its links are made of aluminum and steering is handled with an efficient electromechanical drive system. Wheel sizes range from 16 to 20 inches in diameter.

The new 2012 Audi A6 will arrive at dealerships early next year, with an official world debut pegged for the 2011 Detroit Auto Show. U.S. specifications should be released closer to next year’s launch.