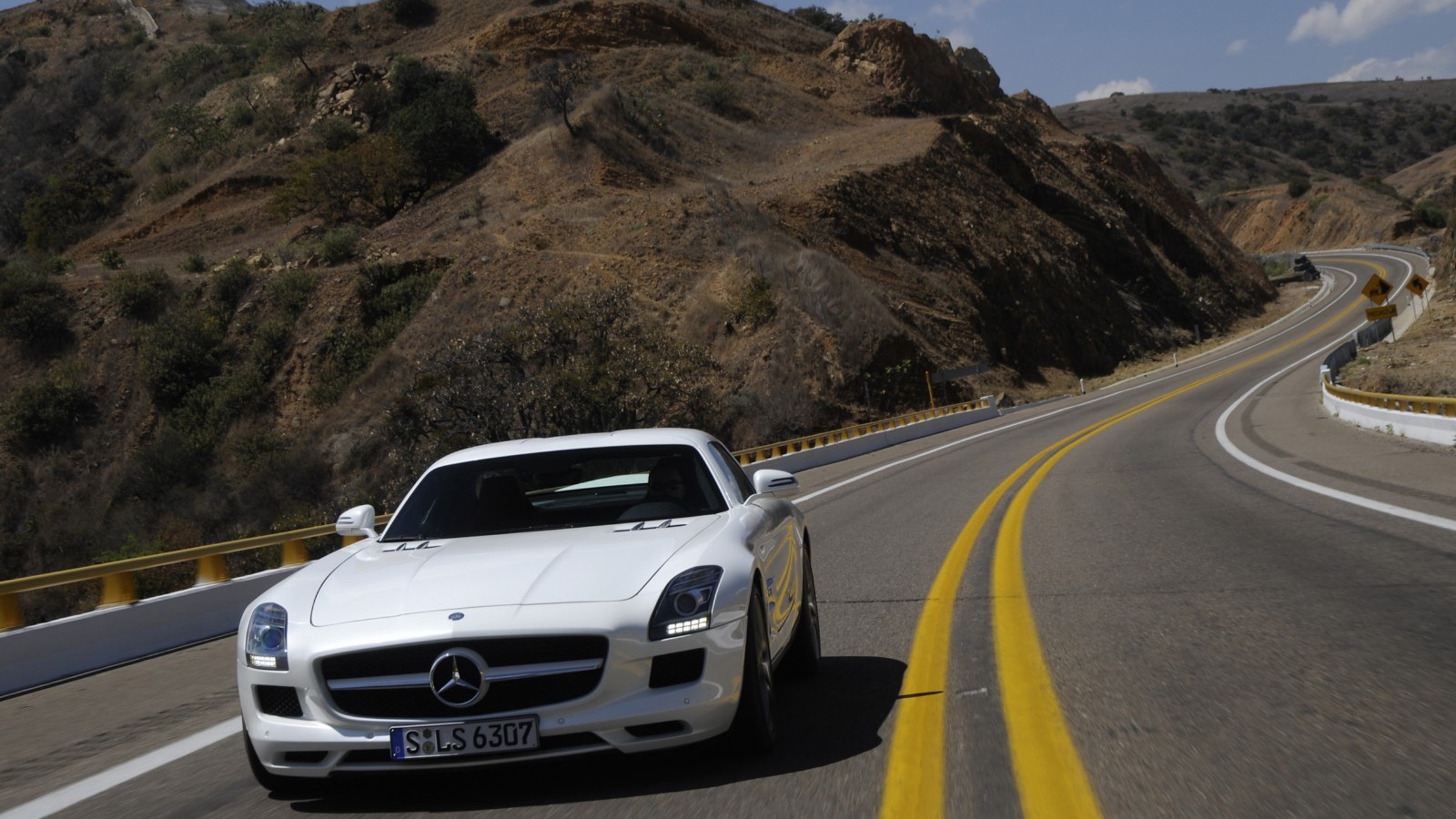 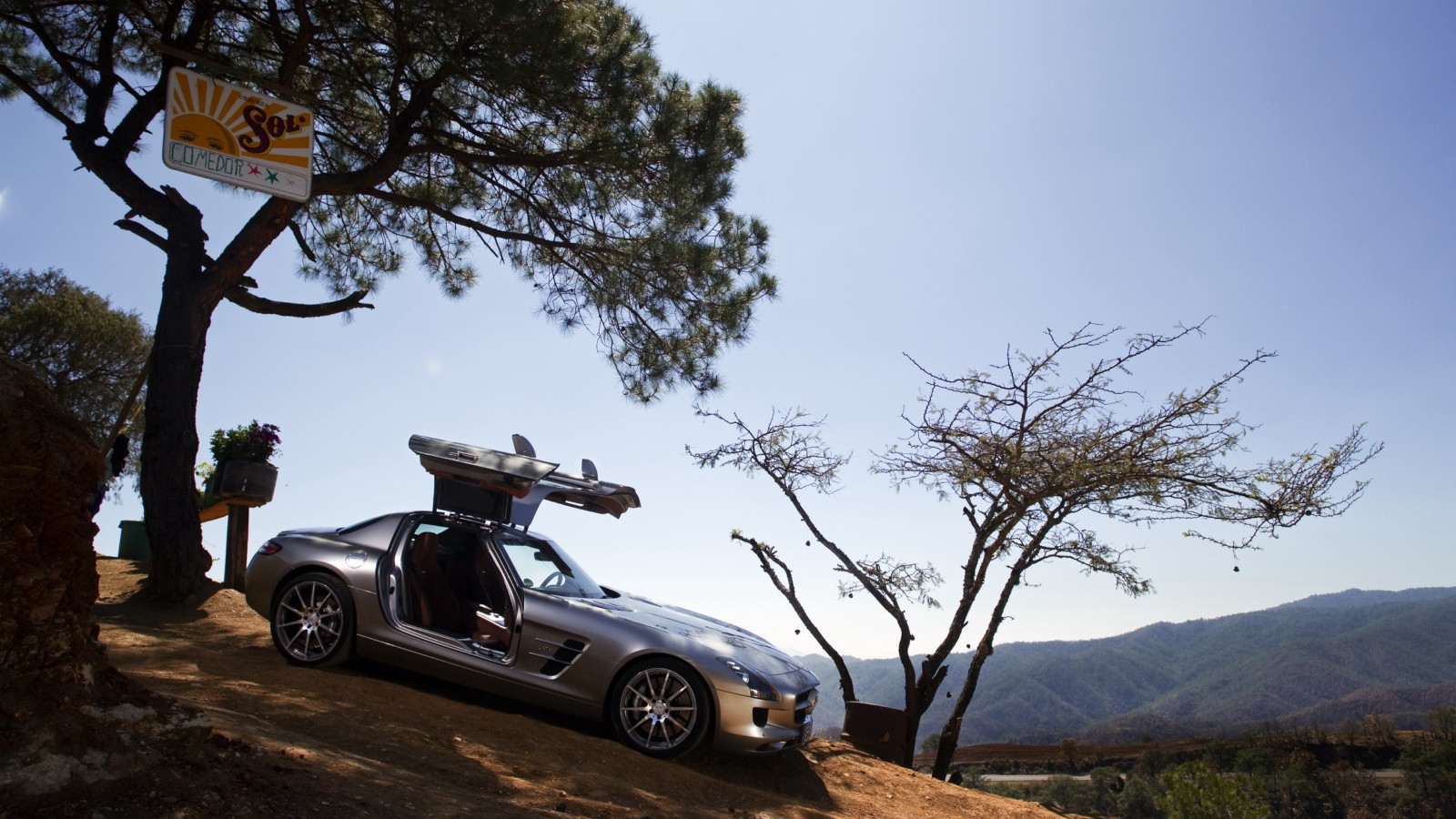 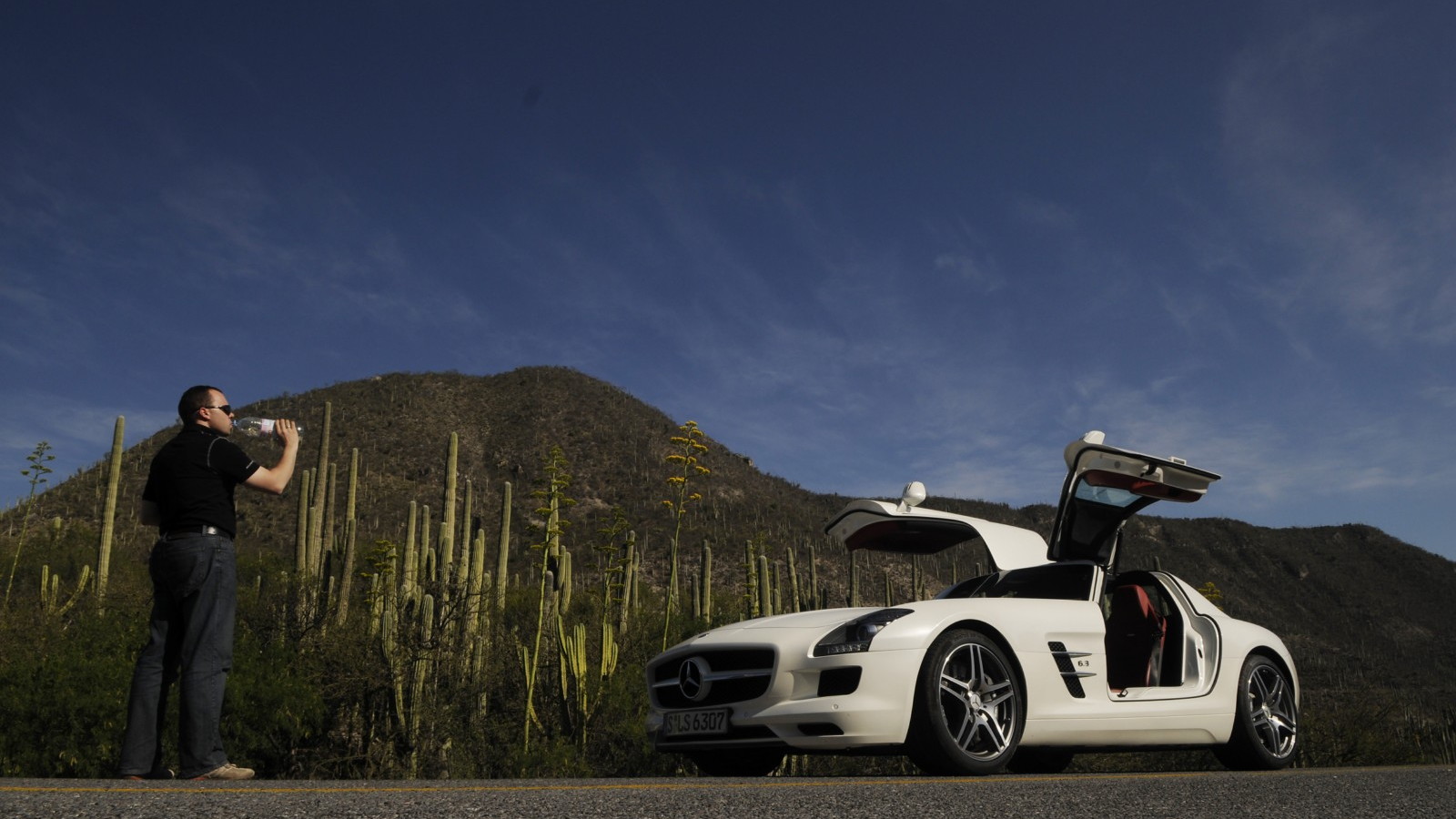 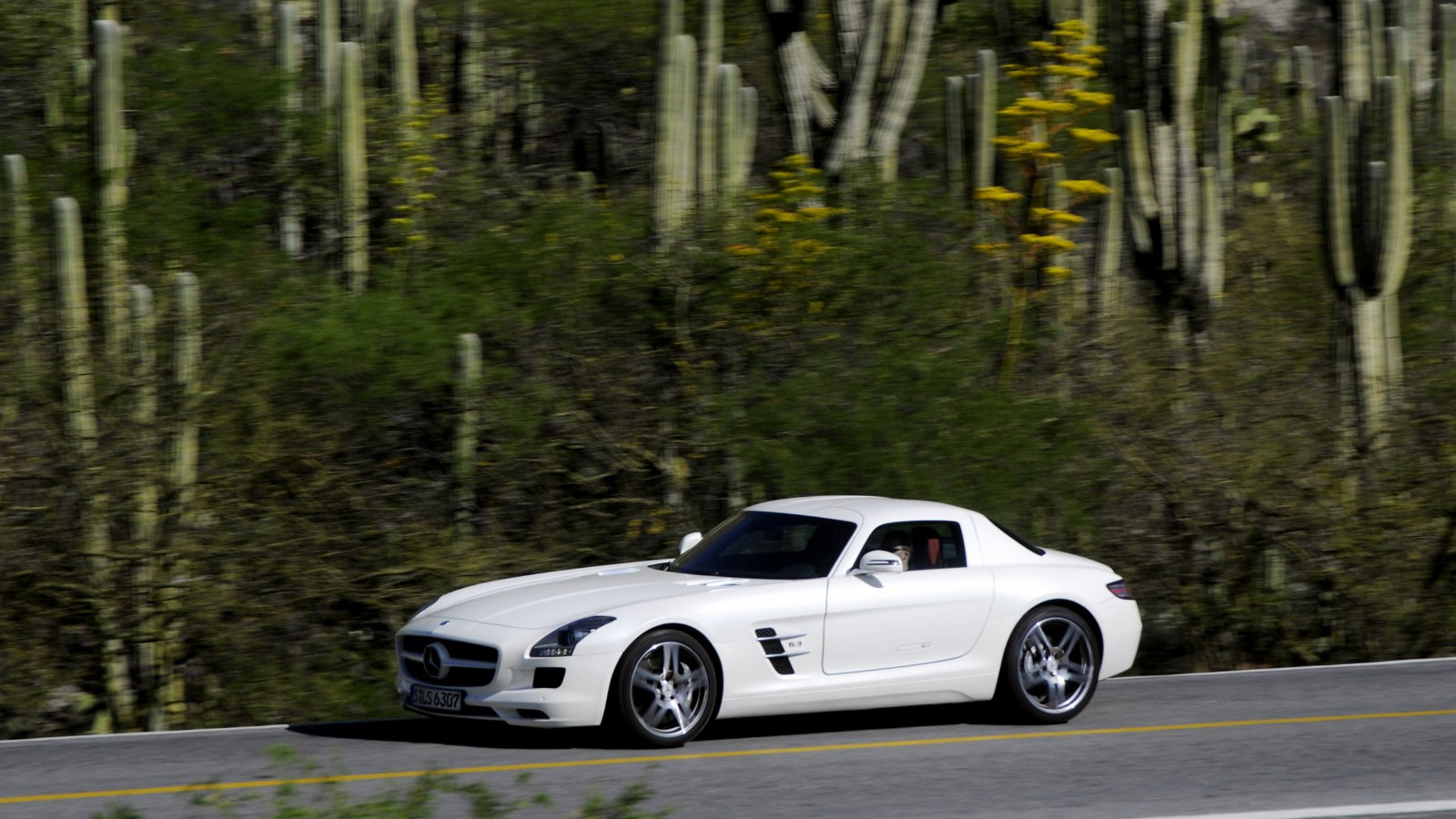 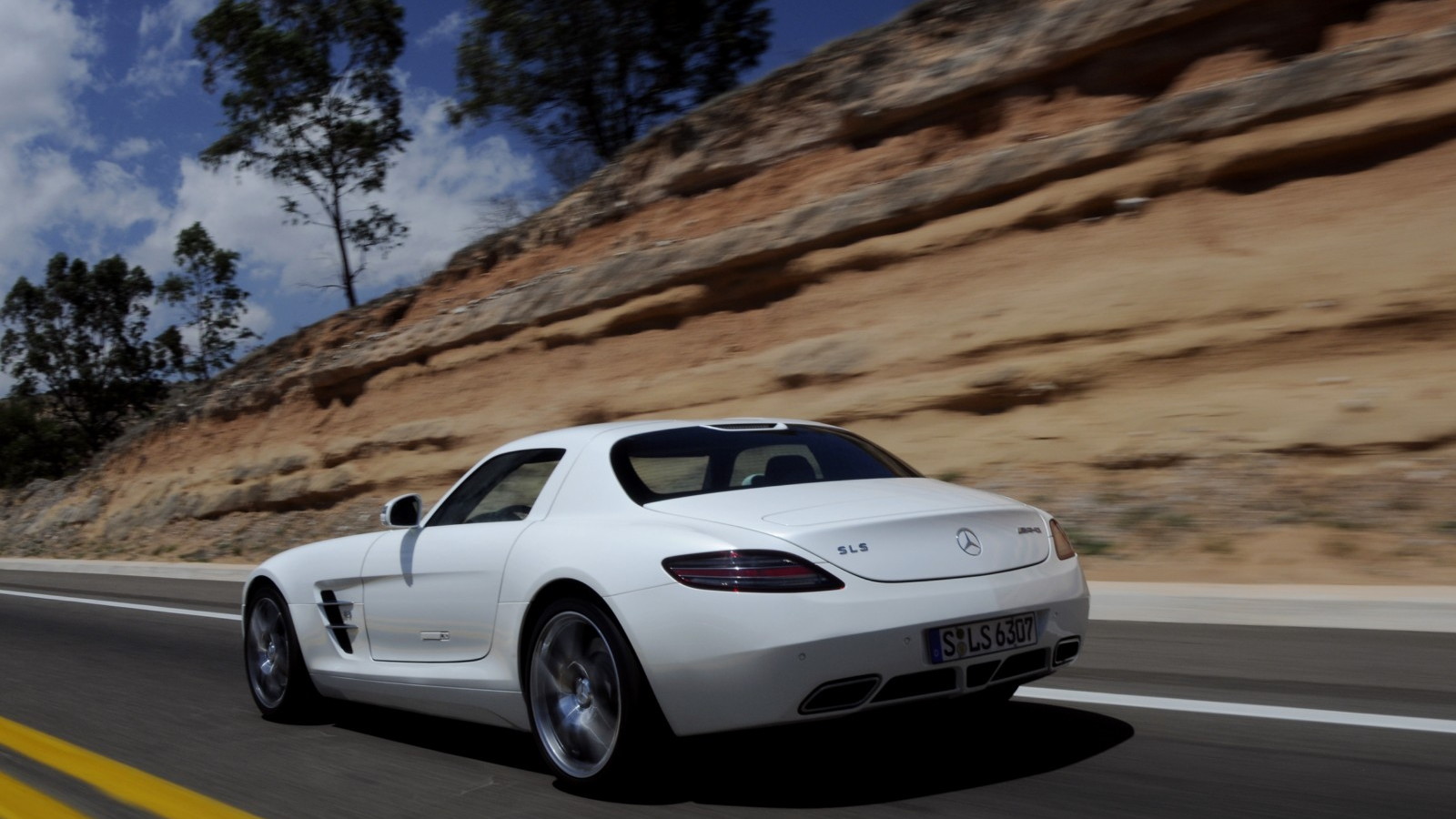 As you round the bend, a single solid yellow line dividing the two-lane stretch of smooth, undulating blacktop stretched along the side of a Oaxacan canyon, you flick the right paddle to grab the next gear, rocketing forward on a wave of eight-cylinder sound, quickly moving to the brake, flicking the left paddle, a smooth turn-in, apex--don’t pause to marvel at the grip, no time--back on the gas, flick the right paddle, cactus and burros flashing by in your peripheral. For the next 50 miles.

Disclaimer: Mercedes-AMG flew us down to Mexico, plied us with drink (in the evenings, naturally) and put us up in classic adobe convents -turned-hotels to do their best to make us love the car. Turns out all they needed was a tank of gas and a winding road.

This is what it's like hammering the 2011 Mercedes-Benz SLS AMG at seven tenths along the route of the classic Carrera Panamericana, and yes, you really do wish you were there.

Born out of Mercedes-Benz's earliest post-war racing efforts, the original racing 300 SL, known internally as the W194, was largely a mashup of available parts--except for the tubular steel frame, which without compromise to comfort and in search of stiffness, gave birth to the now-legendary gullwing doors. Tracing its lineage from those inauspicious beginnings and along the 300 SL's storied path, the new 2010 Mercedes-Benz SLS AMG represents both the latest in technology and the deepest of heritage at AMG.

That heritage is what Mercedes-Benz is celebrating in anticipation of the car's sales launch in the U.S. this month. Motor Authority was on hand to take the car as near to the limit as any sane person would, given the 500-foot drops, sheer cliffs, rather unpredictable mammalian traffic and the car's near-$200,000 sticker price. With the SLS AMG's prodigious grip, willing engine, and rifle-bolt transmission, the limit is high--very high.

So high, in fact, that few people are likely to approach the car's extremes even in the relatively safe environment of a track. Not that they won't have endless laps of fun trying.

We've already delivered you the full details on the car, including its all-aluminum chassis, its 563-horsepower V-8 engine, and our first-drive report on the car from Laguna Seca. The car’s history, its heritage to the Carrera Panamericana and Le Mans-winning 300 SL, and its iconic gullwings have all been made plain. So what, exactly, are we on about?

Performance. Simply put, the SLS AMG is brilliant when pushed hard, yet still docile around town—aside from the stiff ride and close quarters in the cockpit, anyway. Exhaust and engine notes are both impressive, if a bit on the loud side for a modern Mercedes—traits that are tough to deal with when cruising the strip for image. But it’s the open, winding road where the SLS AMG really comes into its own. Switch the transmission control to manual, leave the excellent and non-intrusive traction control on and you're in for one hell of a ride.

Escorted  by the Mexican Federal Police at speeds that would otherwise be seriously extralegal, the SLS AMG dances through mountain freeway, though every nuance of the road is transmitted through the steering wheel, and the stiff suspension lets you know when the road is anything other than glass-smooth. That surfeit of communication is a good thing up to about 150 mph, where the steering feels unsettlingly light, and the near-telepathic levels of information move from just right to overload. The car tracks straight and true despite the gigabits of road data transmitted back to the driver’s hands, but the light resistance and relatively quick ratio make it seem like it’s ready to dart into a supersonic farming excursion at any moment. Of course, all you have to do is peel back to 135 mph or so, and things get a lot more comfortable.

The highlight of the trip was the two-lane, canyon section of the Puebla-Oaxaca trip, which was spent behind the wheel of the SLS and on the tail of a pair of Mercedes’ finest in a C 63 AMG. The sedan acquitted itself well, forcing some hustle out of the SLS AMG to keep up—a credit to the driver of the C 63, perhaps, more than the car—but on later questioning of the wheelman, the C 63 was being pushed to eight or nine tenths, and even to maximum in some corners, while the SLS AMG never went past seven or eight tenths even when the surface turned a bit rough.

After a quick stop for some water and a chat with the C 63 duo, we lit back out on the road, cruising at a cooler pace but still gobbling up the miles of twisting tarmac, tiny villages and picturesque valleys as we homed in on our destination of Oaxaca. Driving those roads in a gullwing Mercedes--roads largely unchanged in 50 years, through villages that look unchanged for hundreds--it’s a natural thing to envision the running of the Carrera Panamericana in its glory days, the high-silled, vulture-barred 300 SL around you, running toward the sunset all but alone, for speed, glory and the thrill of danger.

Then you snap back to reality, realize you’re just a journalist with delusions of grandeur, the Dodge Charger of the Federales running 140 mph ahead of you cutting a swath through the mountains to a waiting hotel, dinner and plenty of mezcal.

For an intensely thorough review of the SLS AMG’s history, design, and technical specifications, be sure to check out our own Marty Padgett’s first drive report, and stay tuned for more high-res imagery and high-definition video of the SLS AMG’s return to its Panamericana roots.