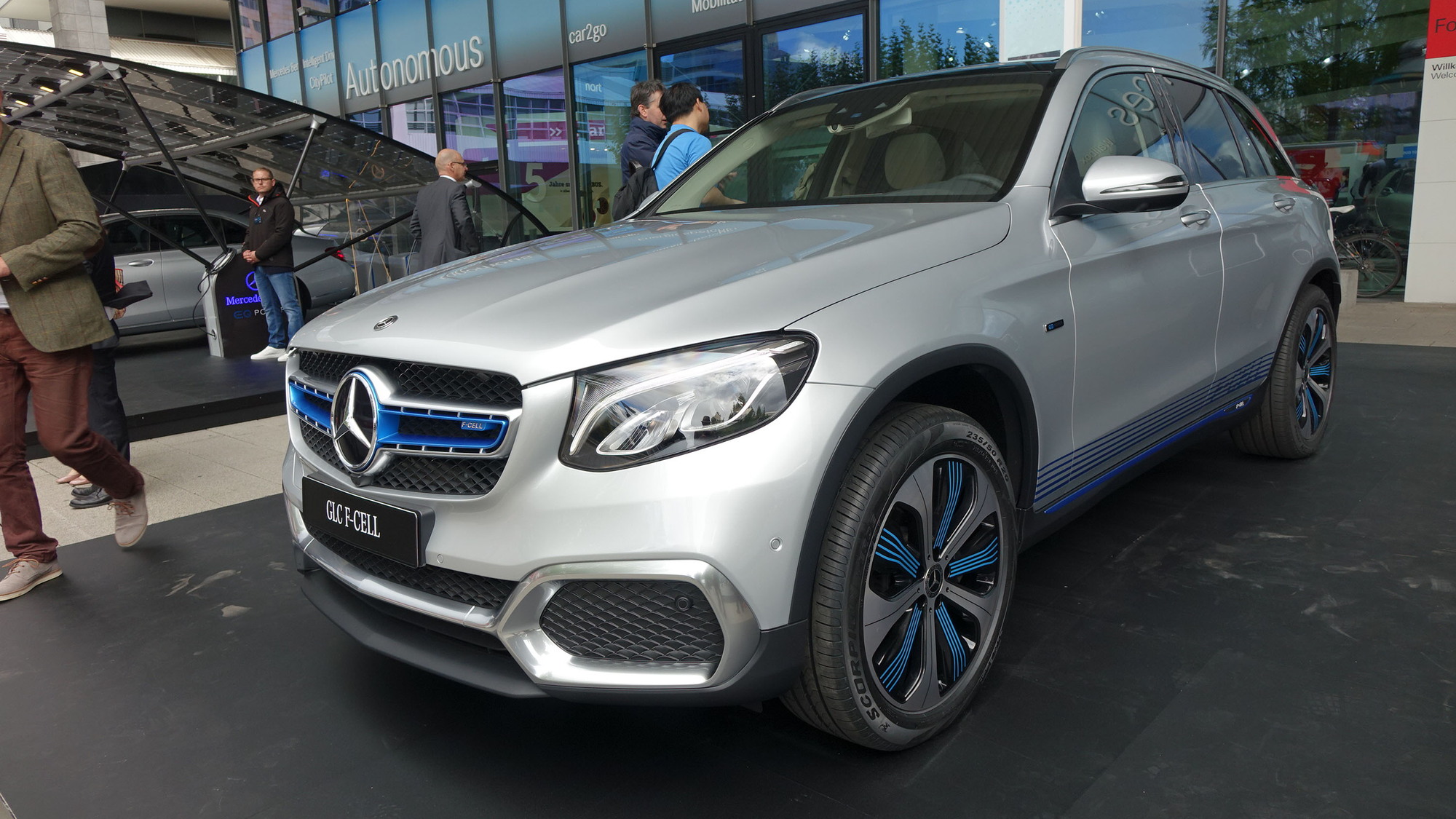 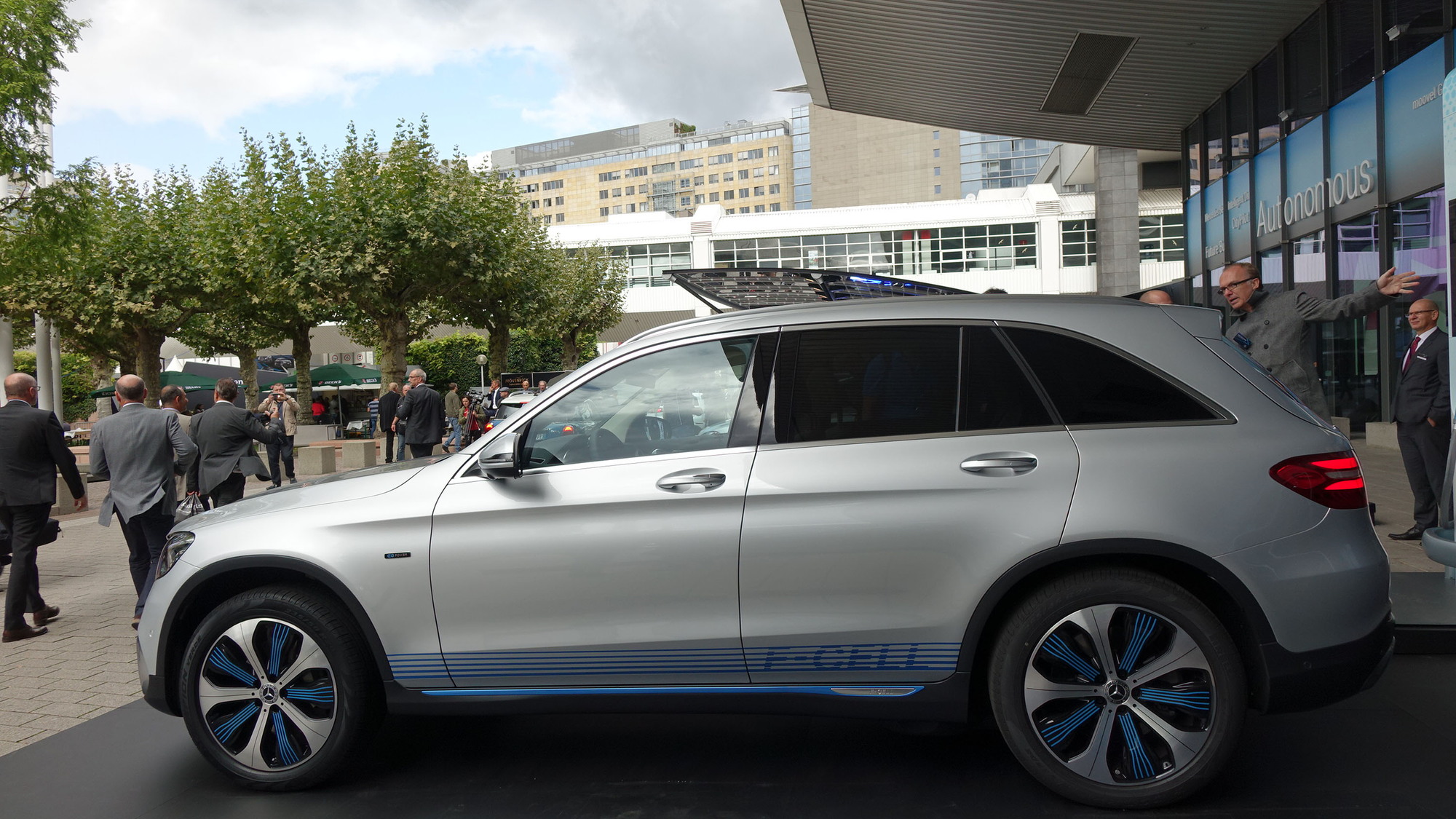 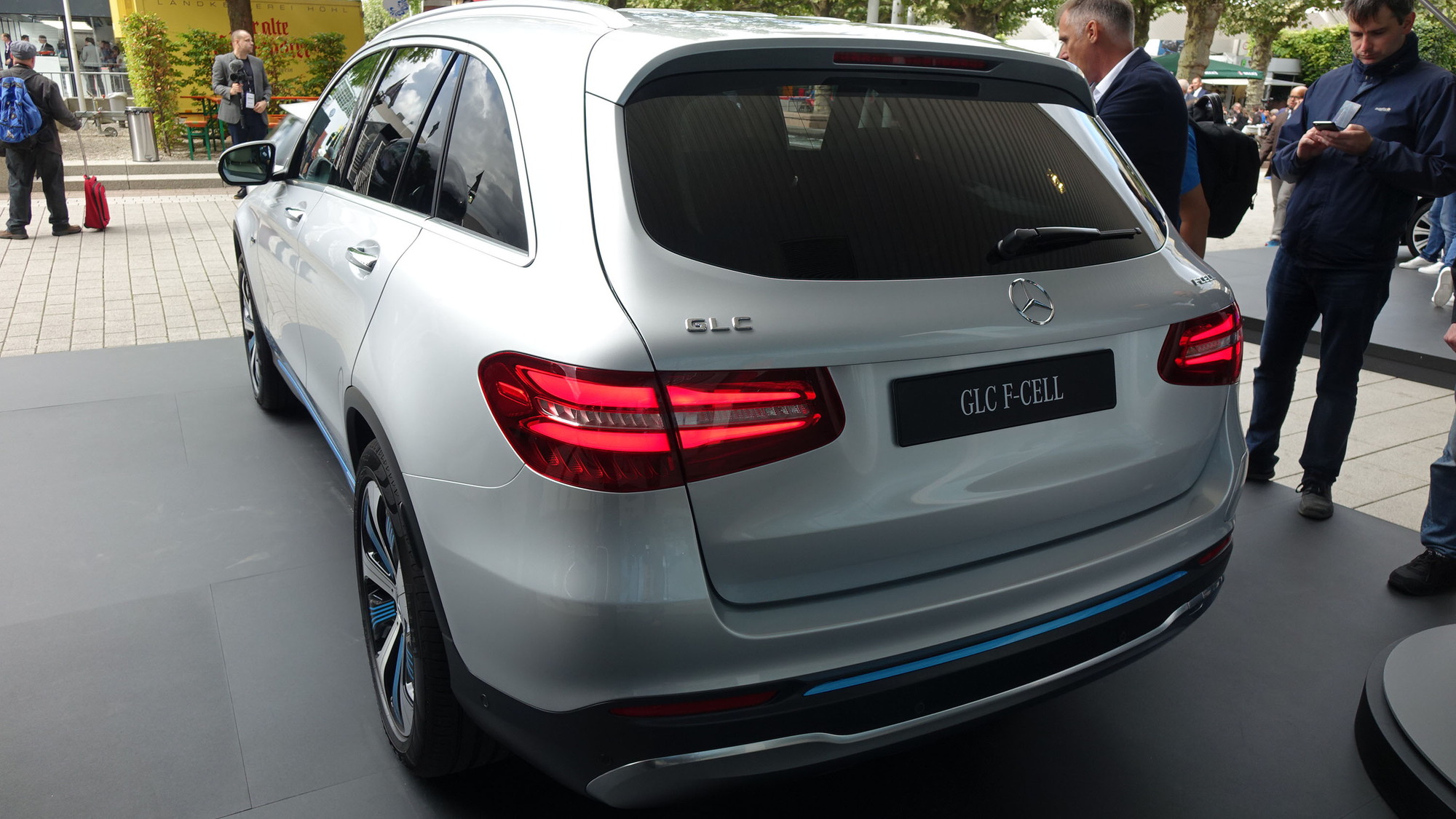 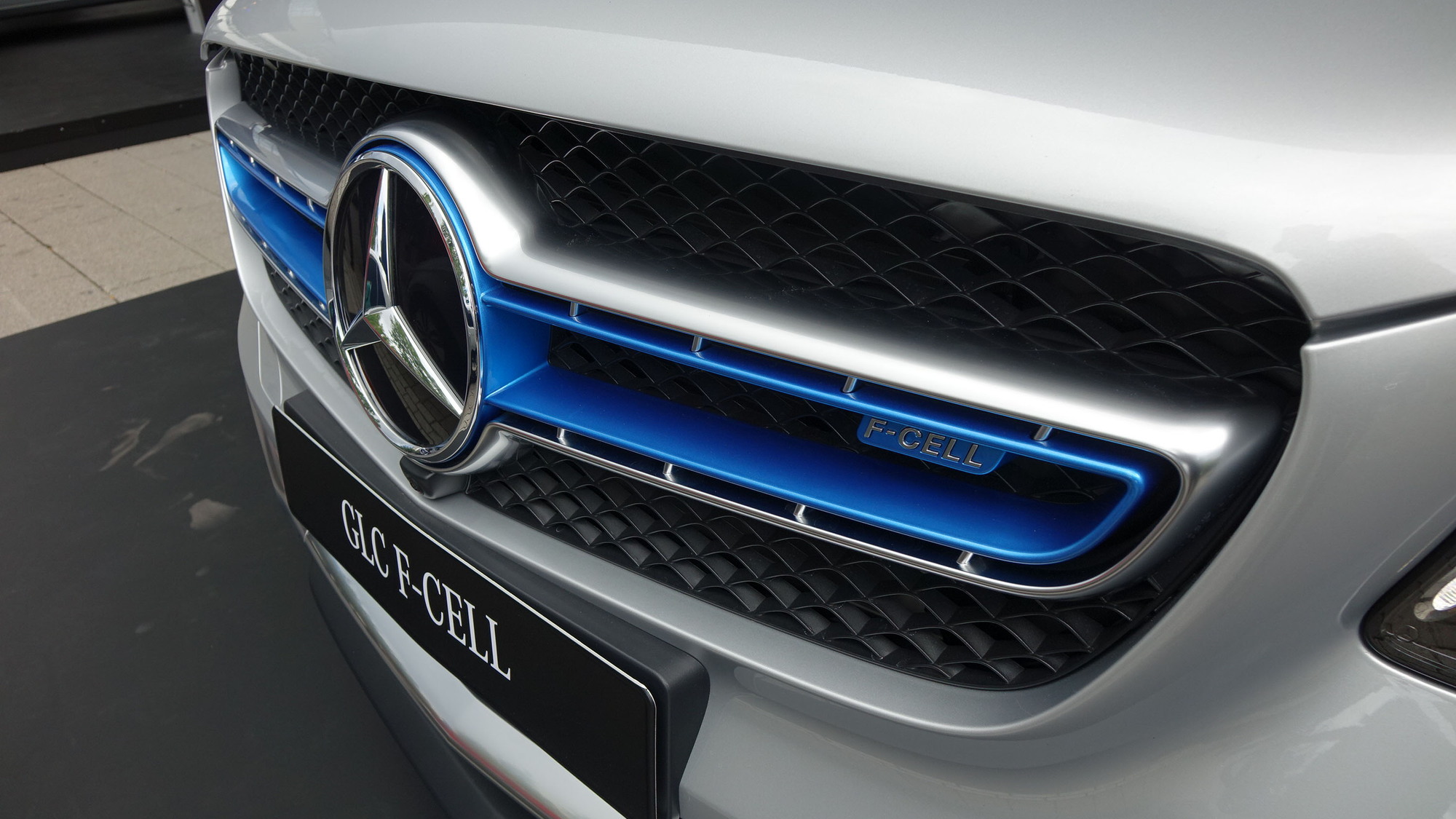 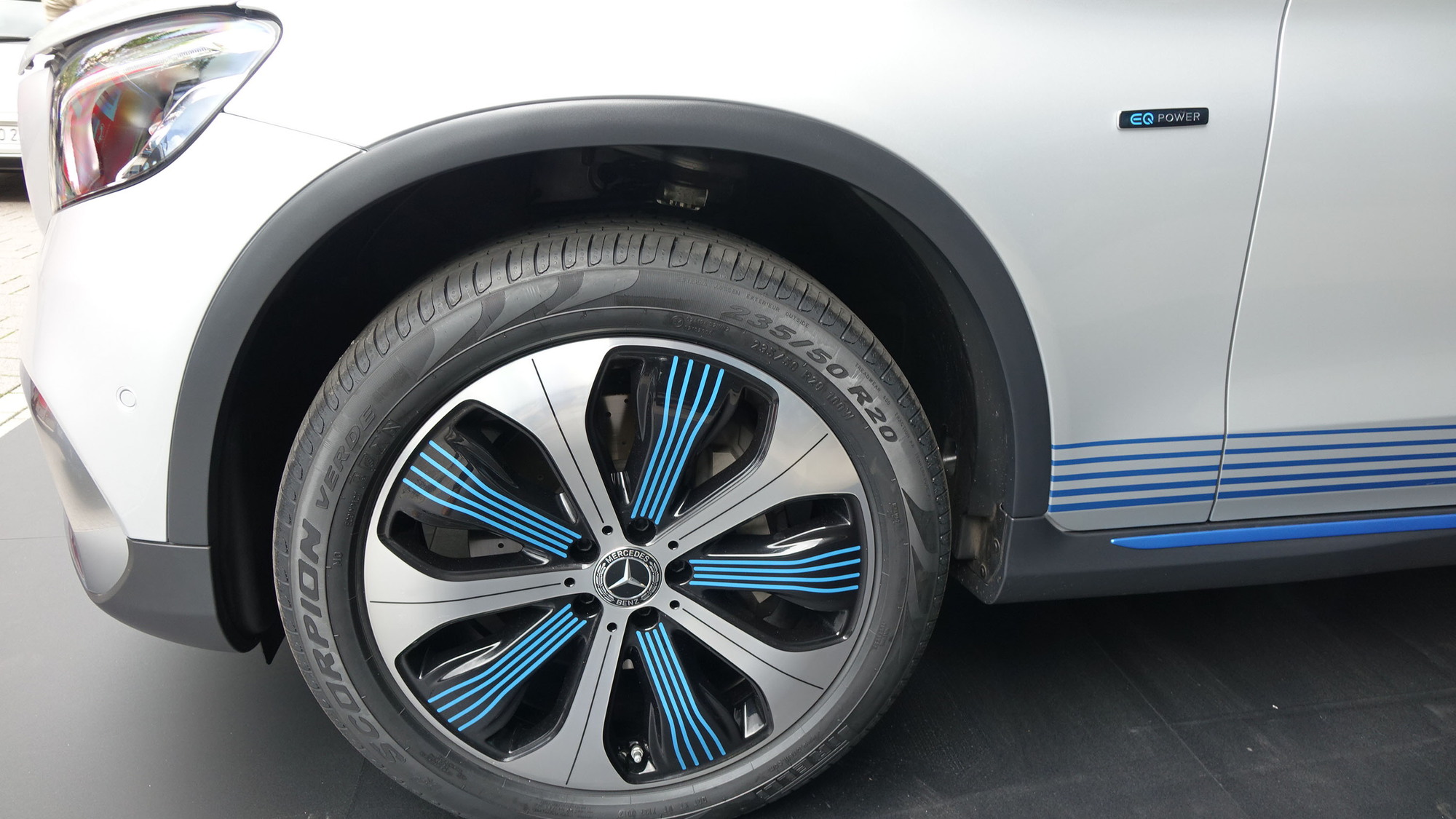 Mercedes-Benz on Tuesday unveiled a hydrogen fuel cell-powered version of its popular GLC at the 2017 Frankfurt Motor Show.

The vehicle is virtually production ready, though we won’t see it in showrooms until late 2019, the automaker has confirmed.

Called the GLC F-Cell, the design is different to most fuel cell vehicles in that it is a plug-in hybrid, a hydrogen-electric plug-in hybrid. Thanks to a 13.8-kilowatt-hour lithium-ion battery, drivers will be able to charge the SUV at public charging stations instead of solely relying on almost non-existent hydrogen stations when the tanks are empty.

The GLC F-Cell’s hydrogen tanks store 9.7 pounds of hydrogen, enough for approximately 270 miles of range in the relatively lenient European cycle. Once that runs out, a full charge of the battery will deliver an extra 30-odd miles.

Peak power from the vehicle’s single electric motor is 197 horsepower and 258 pound-feet of torque, and the top speed is a governed 99 mph.

Sitting inside the vehicle, you’d hardly guess there was so much technology packed within. The interior design is almost identical to the standard GLC although it now boasts a 12.3-inch digital instrument cluster and a 10.25-inch infotainment screen. The menus and indicators on the displays are geared to the functionality of the combined fuel cell and battery-electric powertrain.

Finally, you’ll notice Mercedes’ regular controller wheel for the infotainment system has been replaced by a multifunction touchpad with handwriting recognition. This feature, which works much like a smartphone’s screen, will soon make its way across Mercedes’ fleet.

Automakers are faced with a number of options when it comes to alternative powertrains. Right now gasoline-electric plug-in hybrids and battery-powered electrics are gaining traction (excuse the pun), but automakers are still hedging their bets with fuel cells.

Mercedes has an edge over many of its rivals. The automaker at one point was prepared to launch a fuel cell car on the market as early as 2014, following positive results from a trial fleet of fuel cell-equipped B-Class minivans launched in 2009.

Mercedes eventually axed those plans because the low expected volume would have made the cars too expensive, something Toyota is likely experiencing with its unloved Mirai.

Joining the GLC F-Cell on Mercedes’ stand in Frankfurt is the Project One hypercar from Mercedes-AMG, the EQA electric hatch from the EQ sub-brand, a self-driving concept from Smart, updated versions of the S-Class Coupe and Cabriolet, and the X-Class pickup truck.