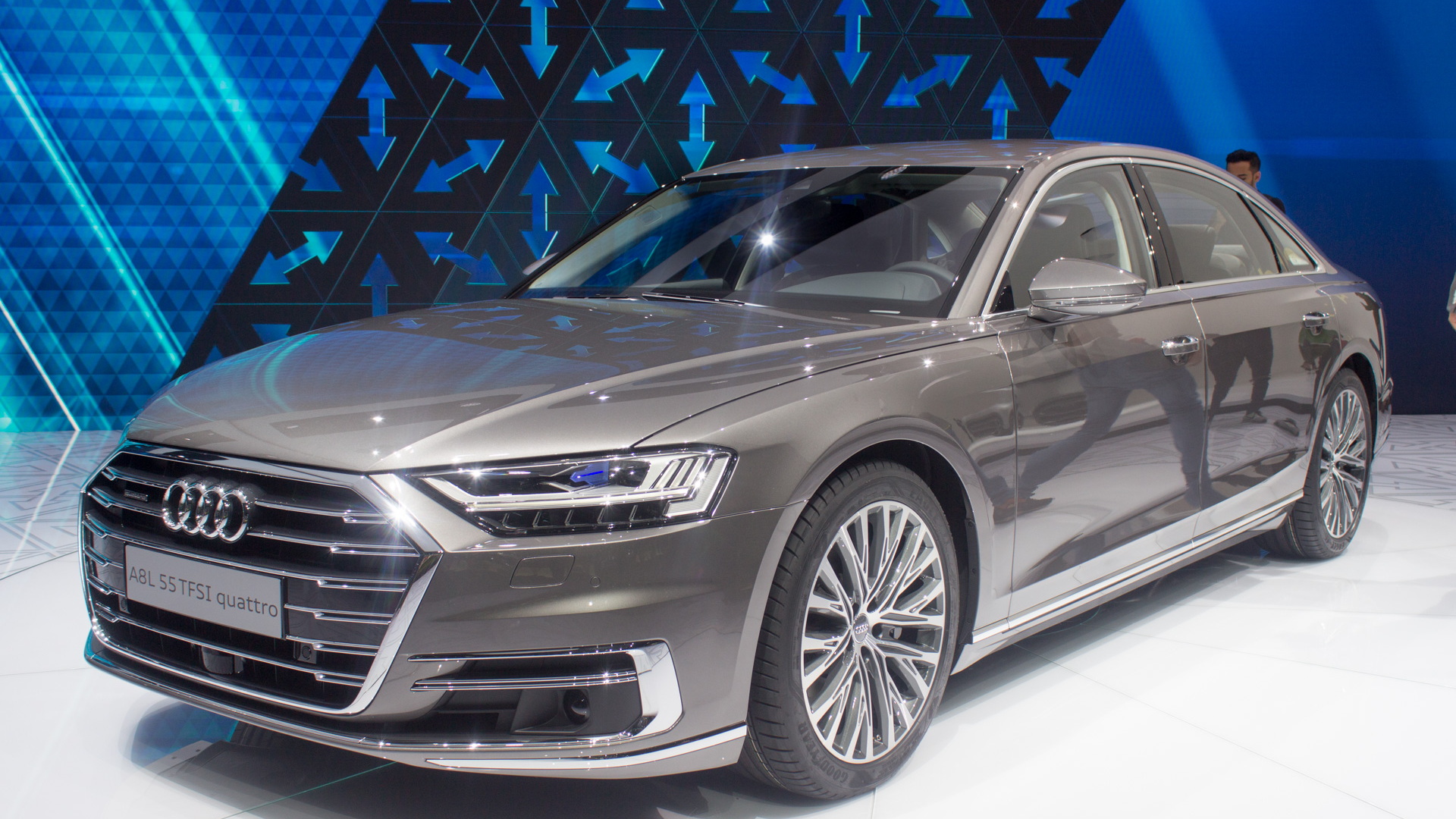 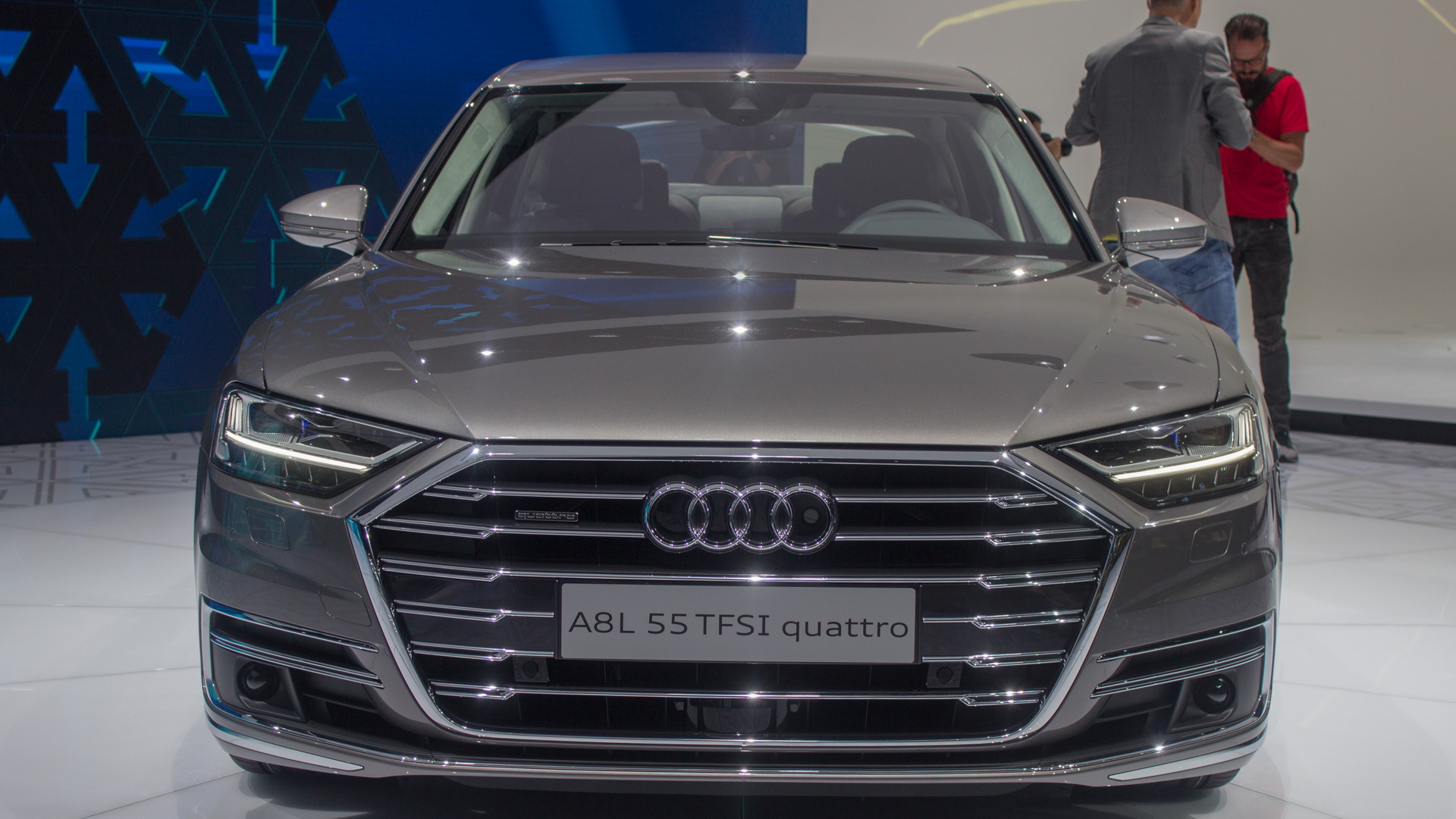 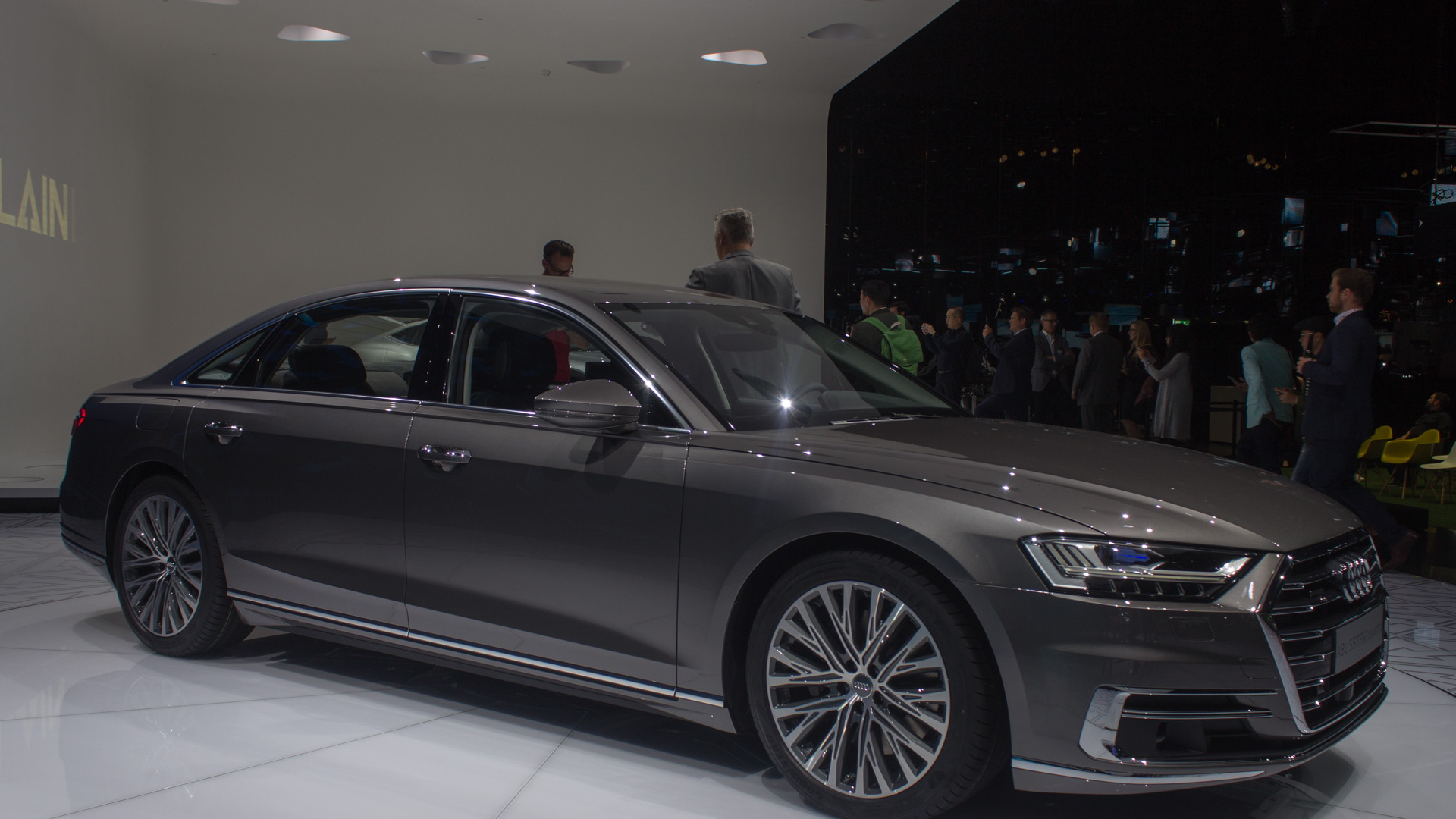 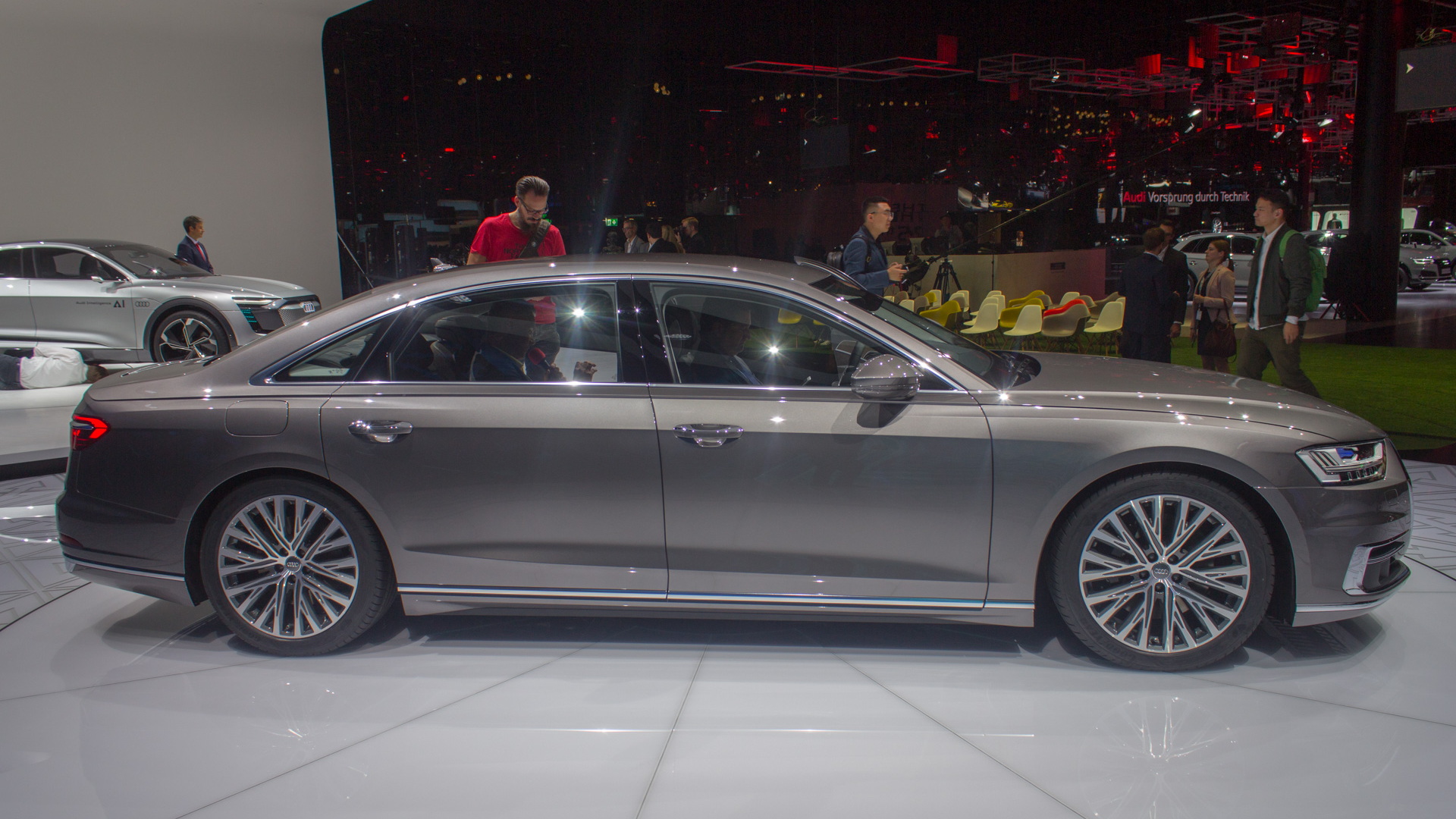 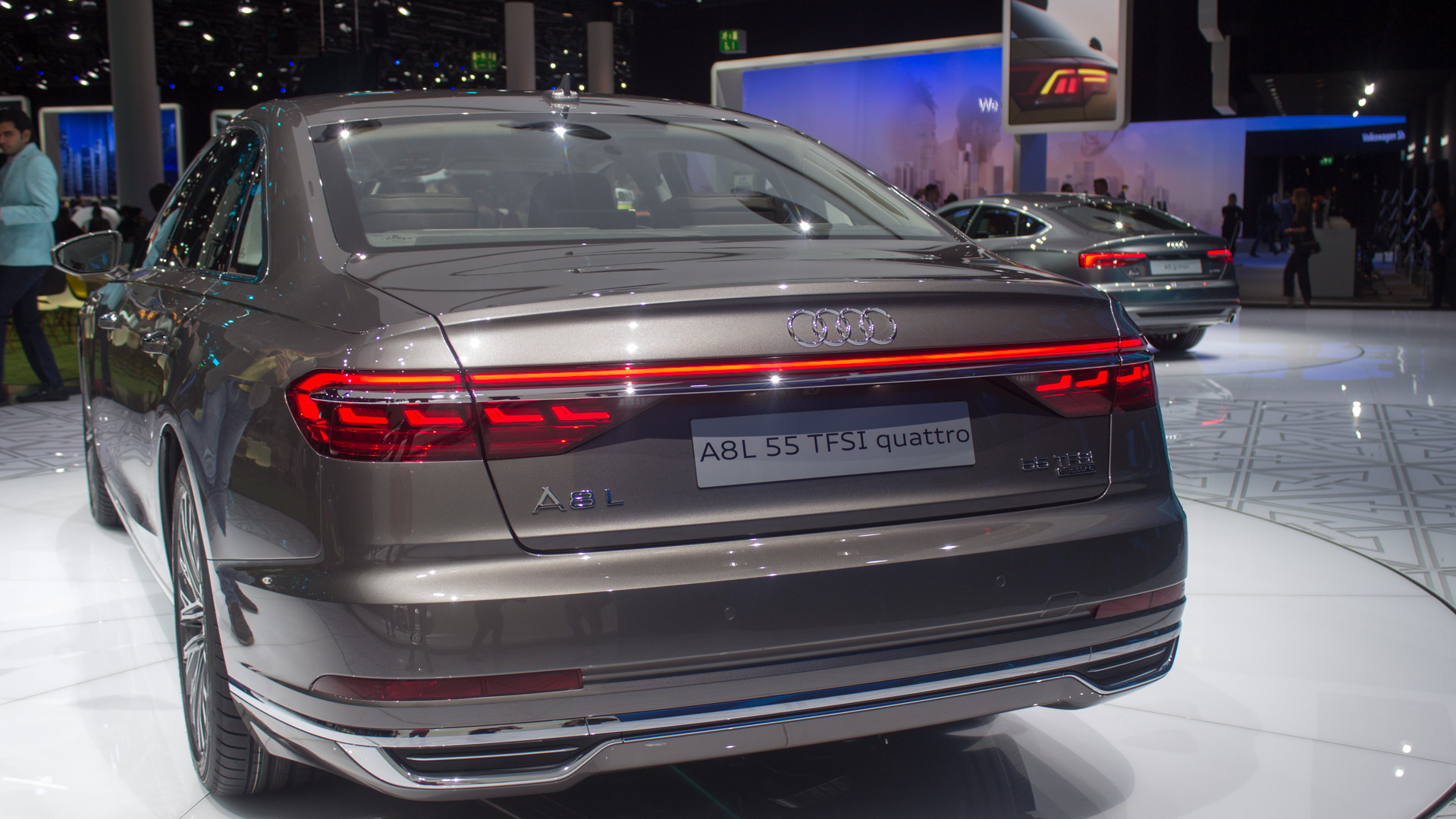 The Audi A8 is now one of the oldest among its peers but a redesigned version of the flagship sedan was unveiled in July at a special event in Barcelona, Spain. It's since made its debut at the 2017 Frankfurt auto show.

This new, fourth-generation A8 is due on sale in 2018, as a 2019 model, and though its design is a tad on the conservative side the technology residing within is a real tour de force.

Chief among the new technological features is what’s referred to as Audi AI, an artificial intelligence-based software system that controls the self-driving aspects of the car and also acts as an electronic concierge. Audi AI is the first self-driving system announced for production with “Level 3” self-driving capability. The most advanced self-driving system in showrooms today is Level 2 which requires constant monitoring by the driver who needs to able to take over in an instant in case of an emergency.

As outlined by the Society of Automotive Engineers (SAE), Level 3 is where a car can take complete control but only in specific situations and still with a driver ready to take over after a short warning period. In the A8, the system can handle some parking situations as well as traffic jams on long sections of uninterrupted roads, such as highways, as long as there is a central divider for oncoming lanes. In such conditions, the system can take over control at speeds up to 37 mph. It means you could use a phone or read a book while the system is active. Fans of the “Spider-Man: Homecoming” movie got a small preview of the system in action.

You won’t be able to nod off in a Level 3 car, though. Sleeping behind the wheel won’t be possible until more advanced Level 4 self-driving cars are realized. Level 4 cars will be able to handle specific situations on their own but may need a driver to take over in extreme circumstances, for example in poor weather or if insufficient map data is available. Many automakers predict Level 4 cars will be available by early next decade. Level 5, the ultimate goal, is where no driver is needed whatsoever.

Once again, two body styles are being offered, though the United States will only receive the stretched model. Both of them are considerably up in size compared to their respective predecessors: the standard model measures in at 17.0 feet and the stretched version adds an extra 5.1 inches to the wheelbase. The generous size means the new A8, even in standard form, should be roomy.

The front of the cabin is dominated by a strictly horizontal orientation and introduces a new interface for Audi. Gone is the familiar rotary pushbutton and touchpad found in the center console. Instead, this is kept largely clear of buttons and switches. Controlling the interface is via a 10.1-inch touchscreen display on the center stack, which, when off, blends almost invisibly into the high-gloss black surround thanks to its black-panel look.

The user interface appears as soon as the car is opened. The driver can use a second touchscreen display on the center console to access the air conditioning and comfort functions as well as make text inputs using a fingertip. When the driver activates a function in the upper or lower display, they hear and feel a click by way of confirmation. The glass-look operating buttons respond in the same way.

As mentioned above, the Audi AI system also acts as an electronic concierge. It means the driver can activate an array of functions using a natural form of voice control. The concierge can also come up with suggestions. For example, when using the navigation, the concierge can provide the driver with intelligent search suggestions, based on preferences or prior journeys.

Underpinning the A8 is the latest version of the Volkswagen Group’s MLB platform for front-wheel-drive cars with longitudinally mounted engines, although all A8s will come standard with all-wheel drive. The body continues to be a spaceframe structure composed of aluminum, around 58 percent of the total, plus steel, magnesium and even some carbon fiber-reinforced plastic (CFRP). Most notable is the use of CFRP in the rear panel, contributing 33 percent of the total torsional rigidity of the car.

Weight isn’t going down much, however, with the weight savings offset by the heavier weight of alternative powertrains and their batteries. Audi has confirmed that every version of the A8 will feature some form of electrification. That's because all A8s will feature a 48-volt mild-hybrid system as standard, regardless of engine type. Mercedes-Benz has also previewed a mild-hybrid system which will debut soon on the S-Class.

Mild-hybrid systems replace the separate starter motor and generator (commonly referred to as an alternator) by a single, powerful motor-generator that can either be belt-driven (in the case of Audi) or integrated with the transmission (in the case of Mercedes). The more powerful unit assists the internal combustion engine, for example when moving off the line or under high-load situations. It also restarts the engine at traffic lights or after coasting, where the engine can be switched. And under braking, it can recover energy. In the A8, the system is said to provide a boost of approximately 16 horsepower. It also allows coasting with its engine switched off and drivetrain decoupled.

The A8 launches with two V-6 engines, one gasoline and one diesel. We're likely to only see the gasoline engine in the United States, a turbocharged 3.0-liter with approximately 340 horsepower. Later, two 4.0-liter V-8 engines will be added, once again in gas and diesel flavors. We’ll most likely only get the gas engine, which will offer around 460 hp.

And eventually Audi will add a W-12 range-topper with a 6.0-liter mill, plus a sporty S8 and a fuel-efficient A8 L e-tron Quattro plug-in hybrid. The latter will pair the gasoline V-6 with a powerful electric motor integrated with the transmission for a combined 449 hp. The plug-in hybrid will also have a wireless charging system for its lithium-ion battery which will be big enough for about 30 miles of electric-only range.

With the power sorted, the A8 also comes with a host of features to get the power to the ground efficient and ensure a smooth, luxurious ride. One of these is an active suspension system powered by the car’s 48-volt electrical system. Via a series of components that includes gears, actuators, and levers, the system is able to exert over 800 pound-feet on the suspension at each wheel, meaning each wheel can be raised or lowered to suit the conditions.

Sensors, including a camera that scans the road 18 times per second, sends data to the suspension system which in a near-instant can generate the necessary forces to counter body lean, vibrations and jolts while on the move. It’s all controlled by a computer called the Electronic Chassis Platform.

Together with the air suspension, which controls the ride quality, Audi boasts that being in the A8 will be comfortable regardless whether you’re out simply cruising or carving up corners.

The active suspension system also has a safety aspect. If the car’s collision warning system detects that an impact at more than 15 mph is imminent, the suspension raises the body on the exposed side by up to 3.1 inches within half a second. The reason is to position the body so that the point of impact is at the strongest points, namely the side sills and floor structure. The result is that the load on the occupants is reduced by up to 50 percent compared with a side impact where the body is not raised.

Other chassis technologies appearing on the redesigned A8 will be rear-wheel steering and a rear differential. At higher speeds, like on the highway, rear-wheel steering improves stability, while at lower speeds it improves turn-in. It also makes parking lot maneuvers easier as less steering is required. Thanks to the technology, the turning circle of the redesigned A8 is smaller than that of the A4. The rear differential, meanwhile, divides torque between the rear wheels.

Pricing information will be released closer to the market launch however we don’t expect things to deviate much from the 2018 A8’s $83,475 starting price.

In the meantime, read the in-depth reviews at The Car Connection.