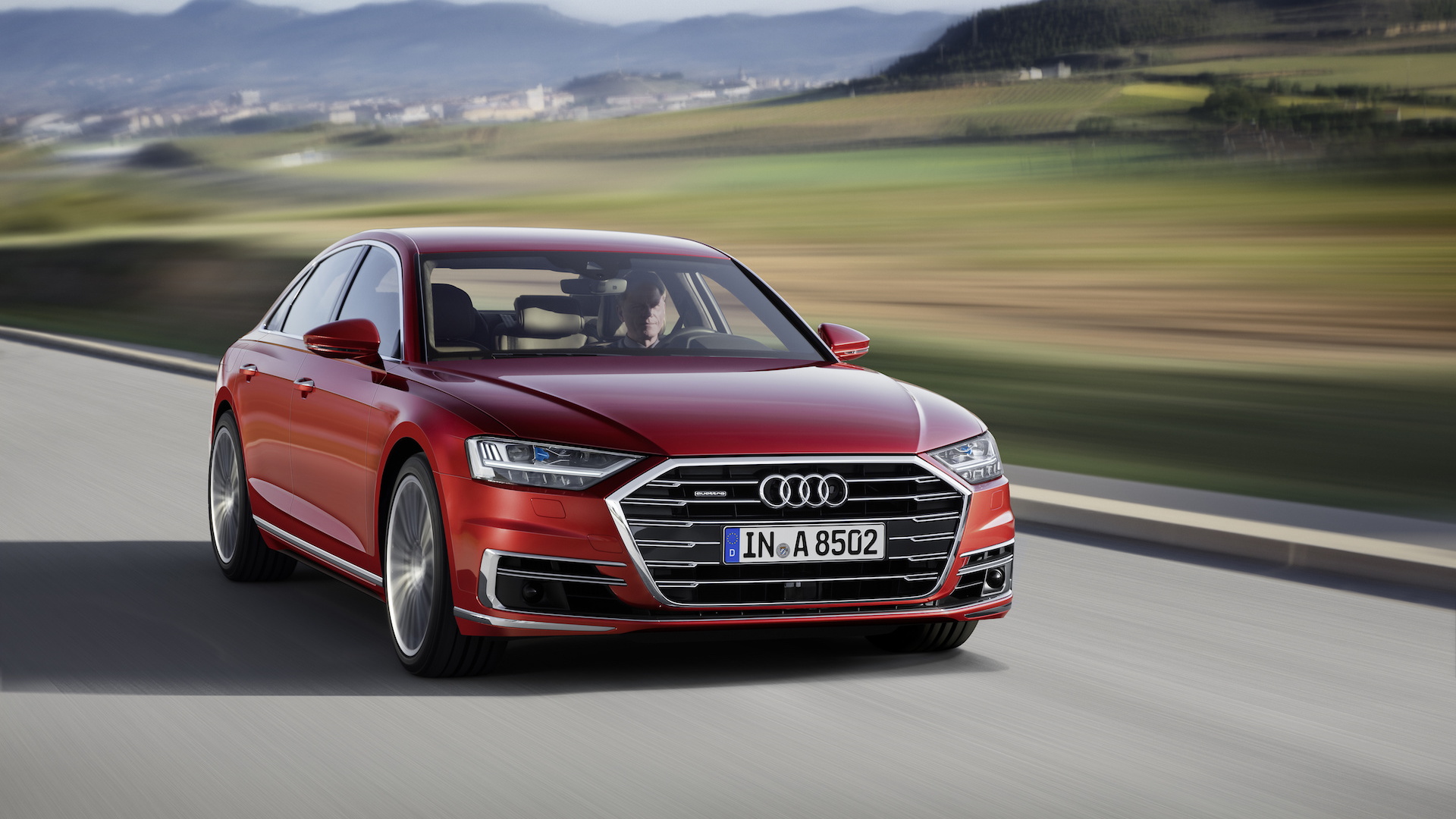 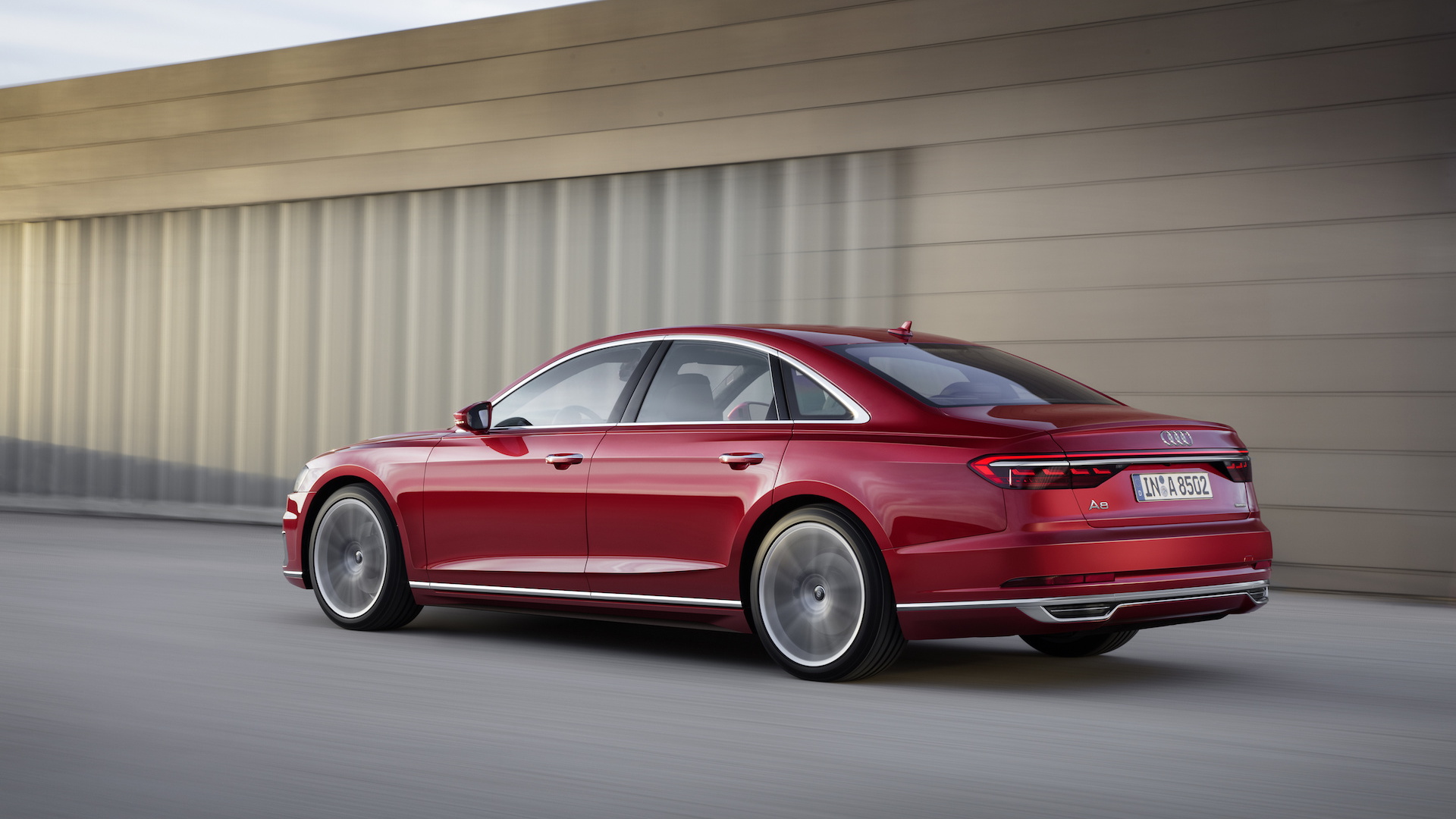 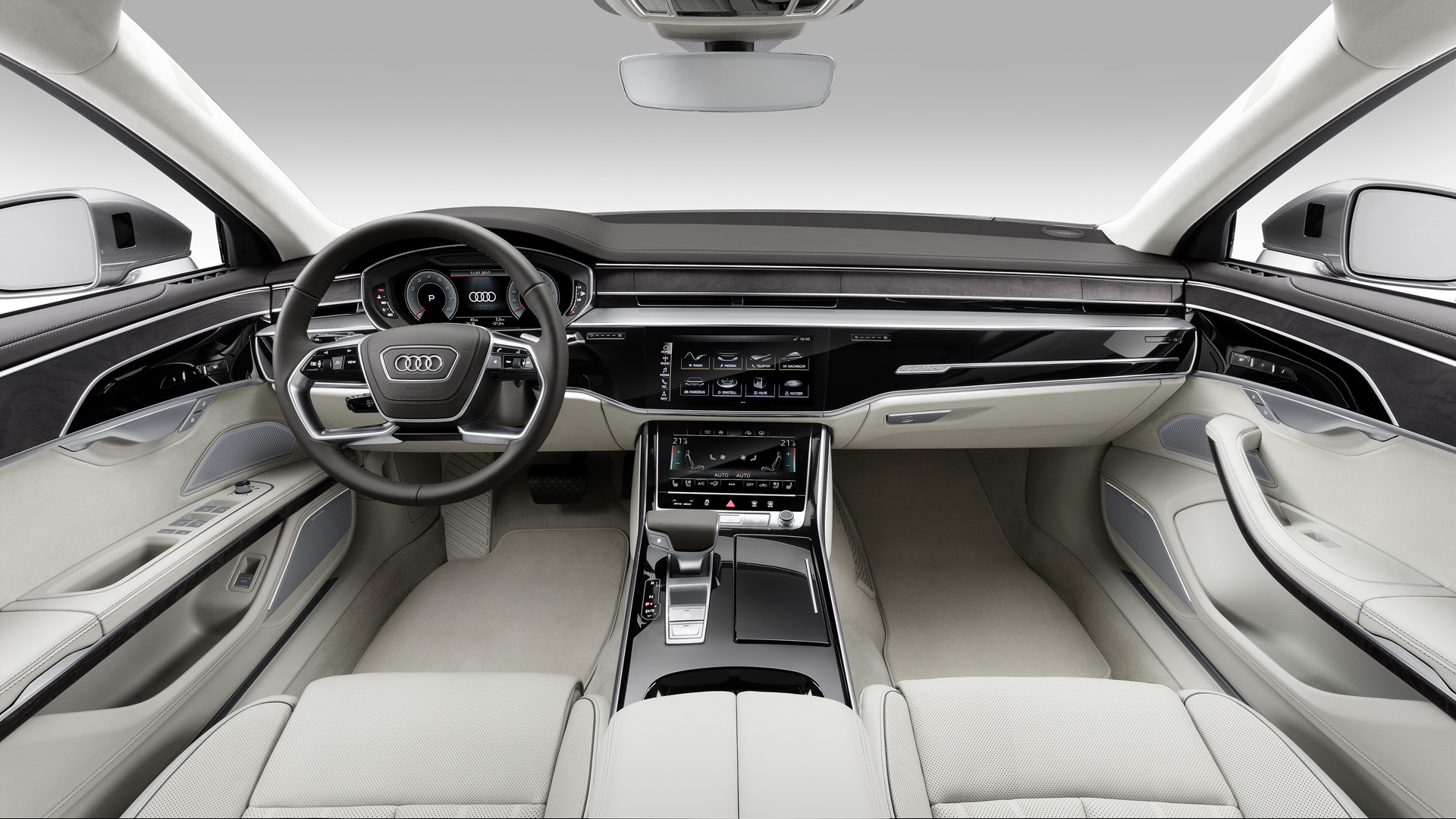 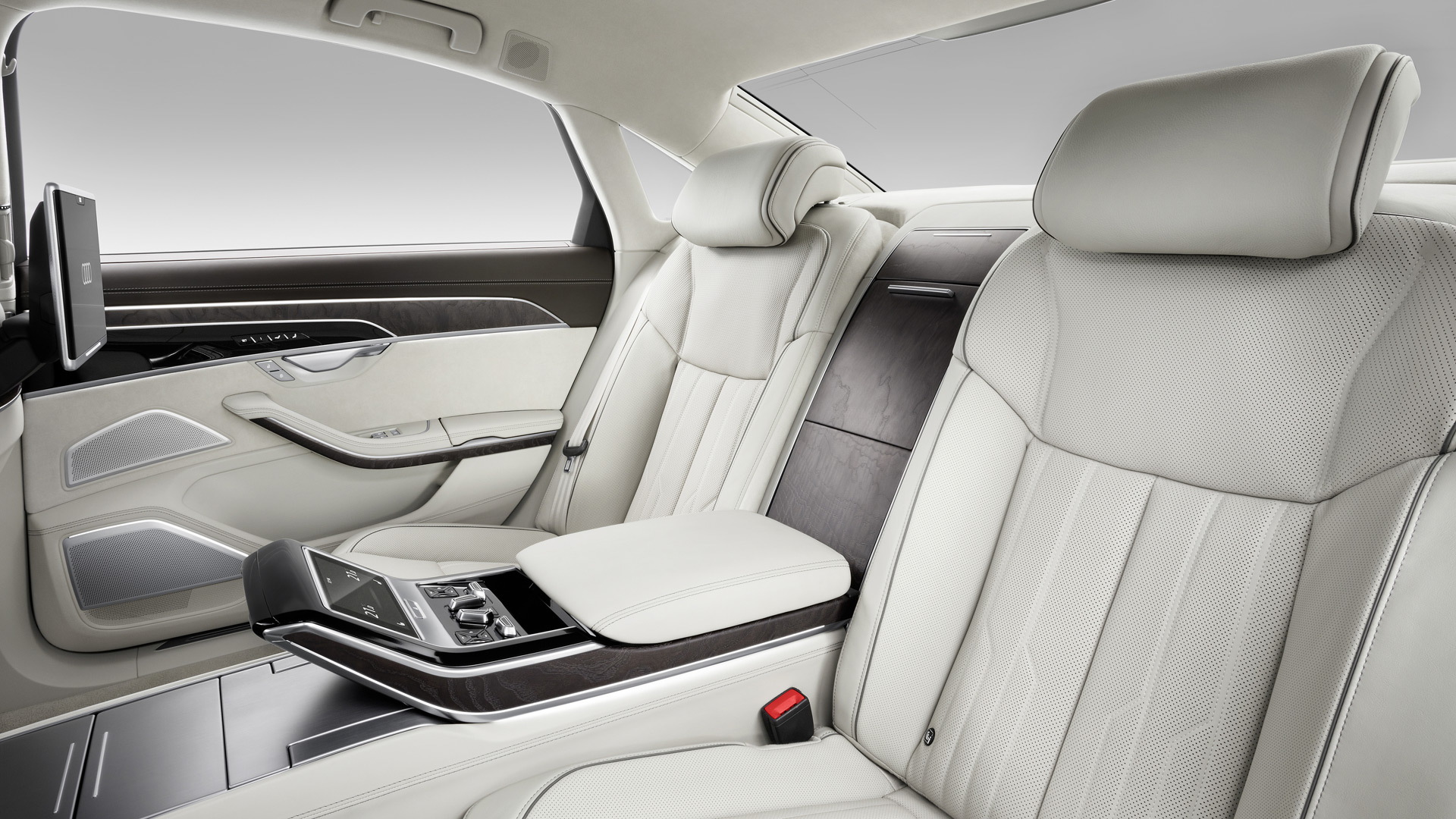 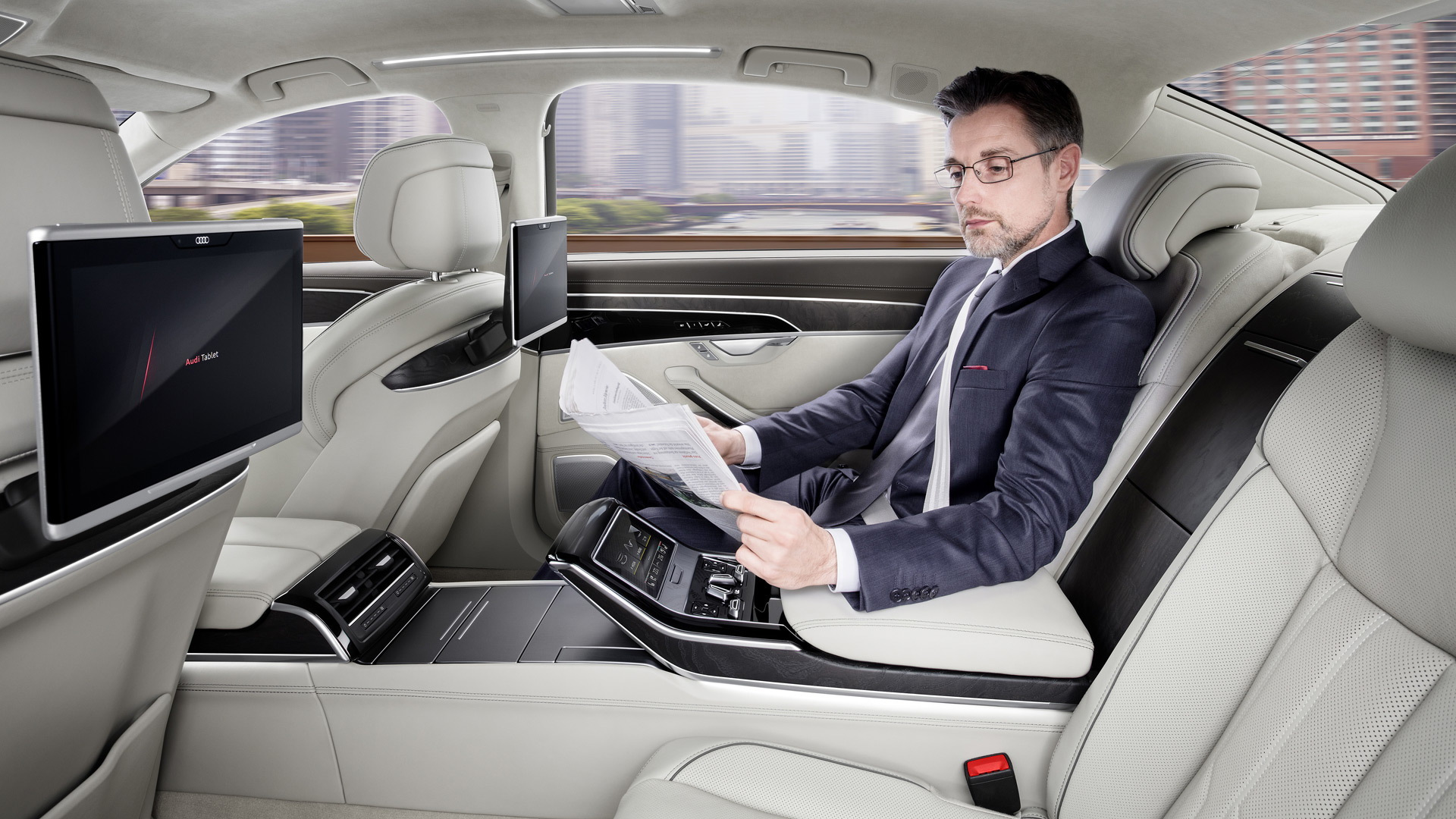 With the launch of its 2019 A8 in Barcelona on July 11, Audi is marketing itself as the first company to sell a Level 3 self-driving car.

The technology isn't legal yet in many markets, but Audi says the new A8 will have the hardware and firmware it needs to wrest control of the car from the driver on a semi-permanent basis.

At the touch of an Audi AI button, the A8 will give audible and visual signals that it's in piloted-driving mode. The car will be able to accelerate, steer, and brake on its own, without requiring the driver to take back control on regular brief intervals (a situation that describes Level 2, seen today on the Tesla Model S and Mercedes E-Class and a few other cars).

Once the system's engaged, Audi says the driver will be able to take their hands off the wheel and perform other tasks, depending on local laws. While the driver checks email or watches YouTube, the car will play abstract video in the gauge cluster.

When it can no longer ensure safe operation–driving conditions, higher speeds–the car will signal the driver that they have 10 seconds to take back control.

While the hardware will be baked into every new A8 from the time it goes on sale in the U.S. in spring 2018, a constellation of agencies in the U.S. will need to change laws and rules before they sign off on it. (A bill under discussion would override all those laws and create a single national standard for legalizing self-driving cars.)

Here's how the A8 moves the self-driving car needle to Level 3 semi-autonomy.

The A8 has electric power steering that can be controlled by the car's computing brain. In the new A8, it also interfaces with an active suspension that's not a requirement for self-driving cars, but networks with their complex interface to make semi-autonomous driving smoother and safer.

A host of cameras, sensors, and scanners

Audi essentially builds a sensory system for the A8 that lets it "see" and decide how to react to obstacles. At the front, an infrared camera handles night-time driving, while a monocular camera at the top of the windshield delivers an overall image of the road ahead. Four 360-degree cameras mount on the front, rear, and under the sideview mirrors; their data compiles into a surround-view image of the car and its environment.

A new, single laser scanner mounts to the front of the car. Its combination of laser and mirrors sweeps through a 145-degree field of view within a couple of milliseconds to register obstacles up to 262 feet away. The scanner can read information even in bright sunlight, fog, and rain. In combination with the other sensors, the A8's piloted-driving hardware can create deeply detailed images of the car's surroundings.

The information from all those data capturing devices gets blended together, and examined for accuracy. Then it's shared with a cloud-based learning field, combined with data from other cars, then re-consumed by the A8 as it drives itself. The system relies on the redundancy of all the information it gathers, so it can pilot the car when one stream or more of data is missing. The redundancy isn't based on strict formulas. If extreme wet and cold creates a thick layer of ice in front of the car's laser scanner, it may not have enough information to proceed; if fog impedes camera-based information but the road surface is good, the car may be able to soldier on.

Audi says this first iteration of Level 3 driving is very much based around commuting tasks, reined in by geofencing to situations where it's appropriate and safe. When the system is engaged, the car determines whether it's in an area where it can drive under 37 mph, on a multi-lane road divided by a physical barrier. If it doesn't see those situations, it will not engage; if it's already engaged, it will revert control to the driver. Audi says its biggest hurdles are in detecting cross-traffic, pedestrians, and bicycles–and these initial limits dramatically reduce those circumstances.

The presence of a driver

Level 3 driving in the Audi A8 requires a driver, not just a passenger chilling in the backseat. A camera checks to make sure the driver hasn't fallen asleep. If they do, the system warns the driver. If they haven't woken up, the car brings itself to a stop.

There is a use case when no driver is needed. The A8 will offer a parking and garage system independent of the piloted-driving setup. The parking assistant will allow the car to negotiate its way into spaces and garages even without a driver present. The process is governed by a smartphone app, but it can also be initiated by the driver inside the car.

Some help with self-driving regulations and road quality

The A8 may be able to handle the complex task of driving, but it can't handle the patchwork of legislation and road conditions. That will take extensive lobbying, already underway in Washington, D.C., and other national capitals.

It's more than a self-driving issue. Audi is wrestling with the legality of delivering over-the-air updates to the car, with communicating the different levels of hardware sold in different editions of a single car, and how to stage regular upgrades in self-driving technology to an existing model line. Never mind the legal prospects of liability, and what drivers will be allowed to do in self-driving modes: Audi will have to work with legislators and dealers just to figure out how it can unlock new features.

It's fair to say automakers will also need some help on road quality before self-driving cars can prosper in markets outside California, Nevada, and other locations with stretches of roads carefully groomed for self-driving car demonstrations.

That discussion is just in its infancy, but a bill in the House of Representatives could supersede local rules with a single national law that would permit self-driving cars.

Audi expects it will be able to offer some form of Level 3 self-driving in the 2019 A8 when it goes on sale here sometime next year.