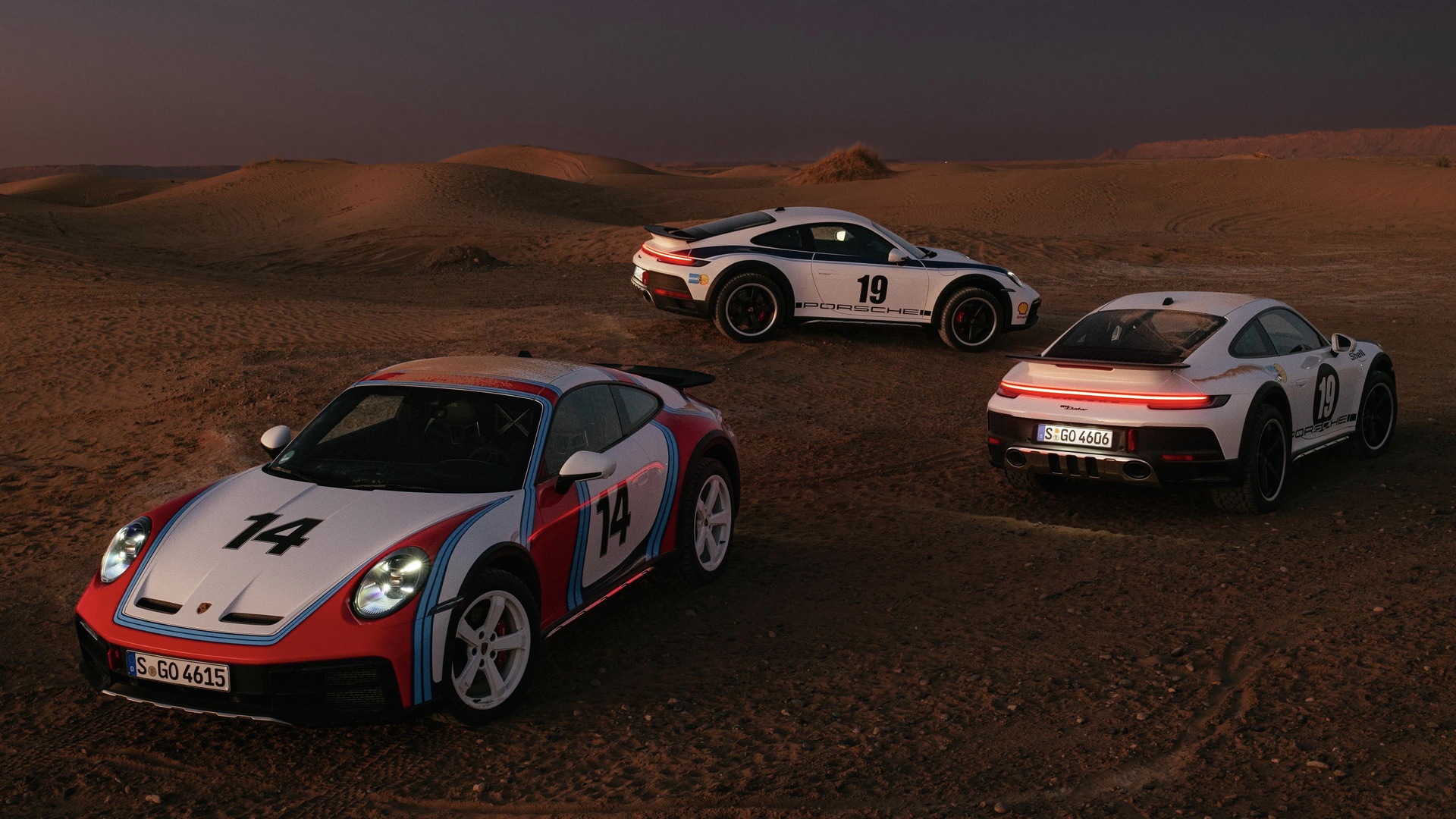 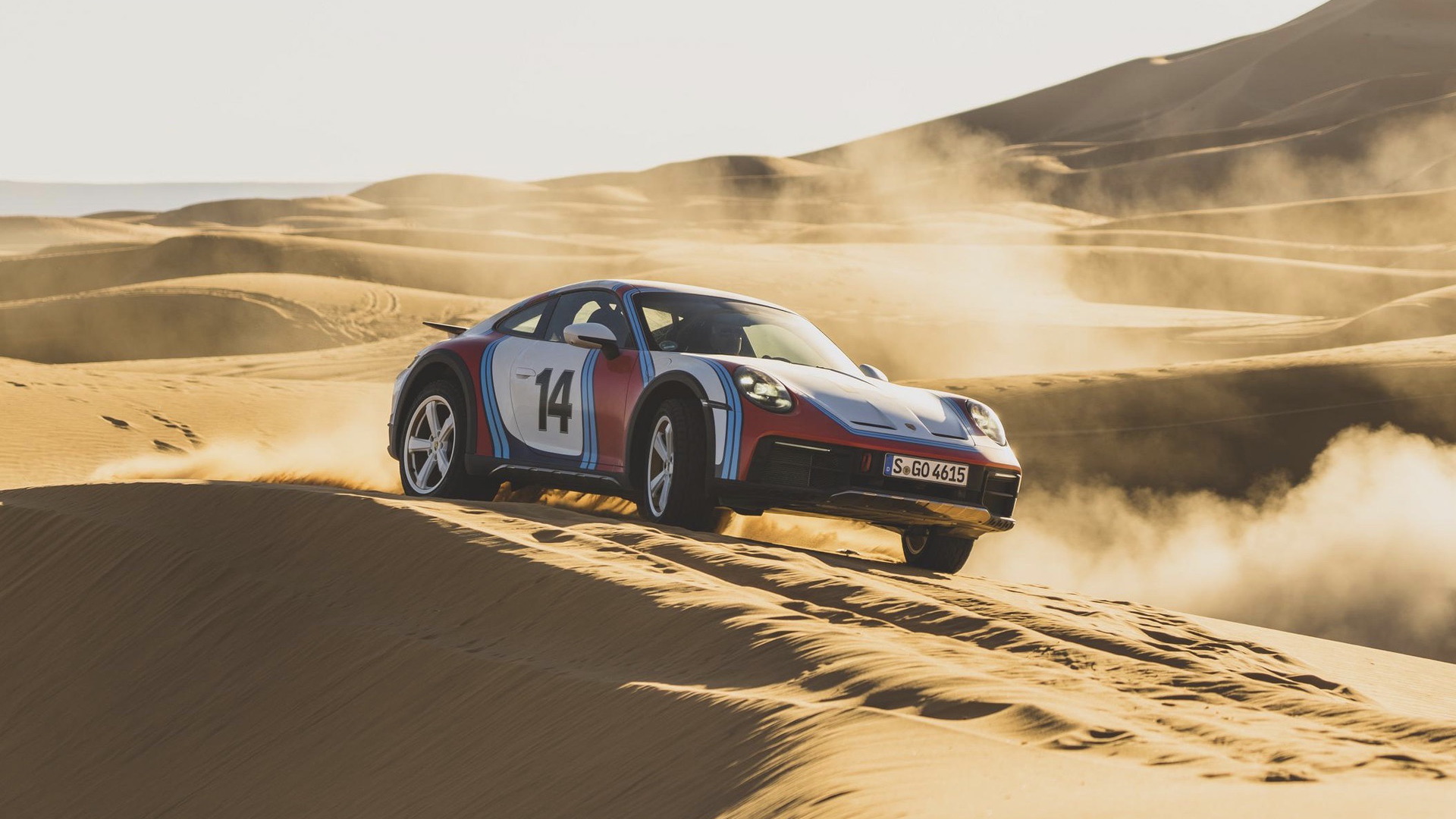 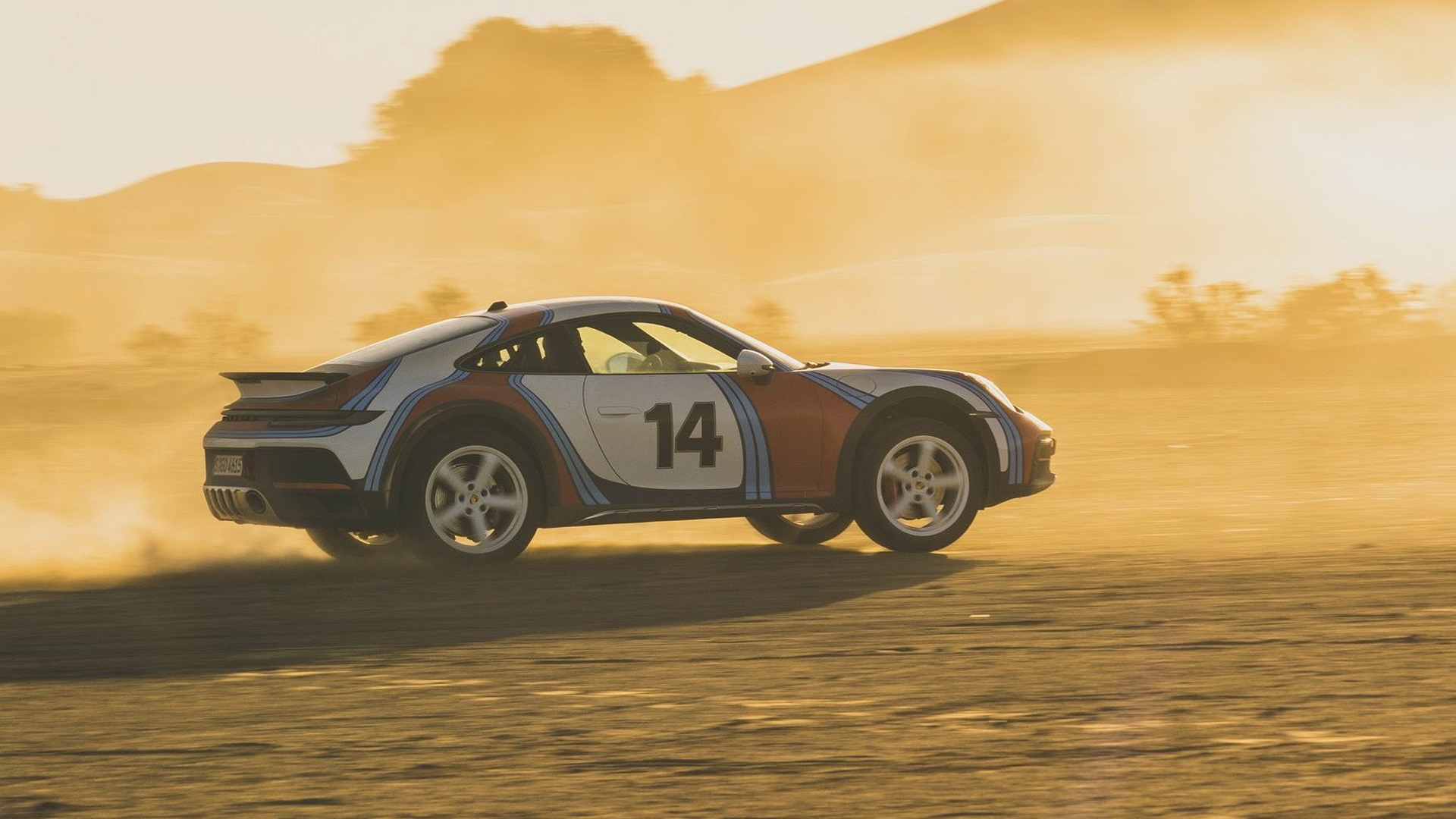 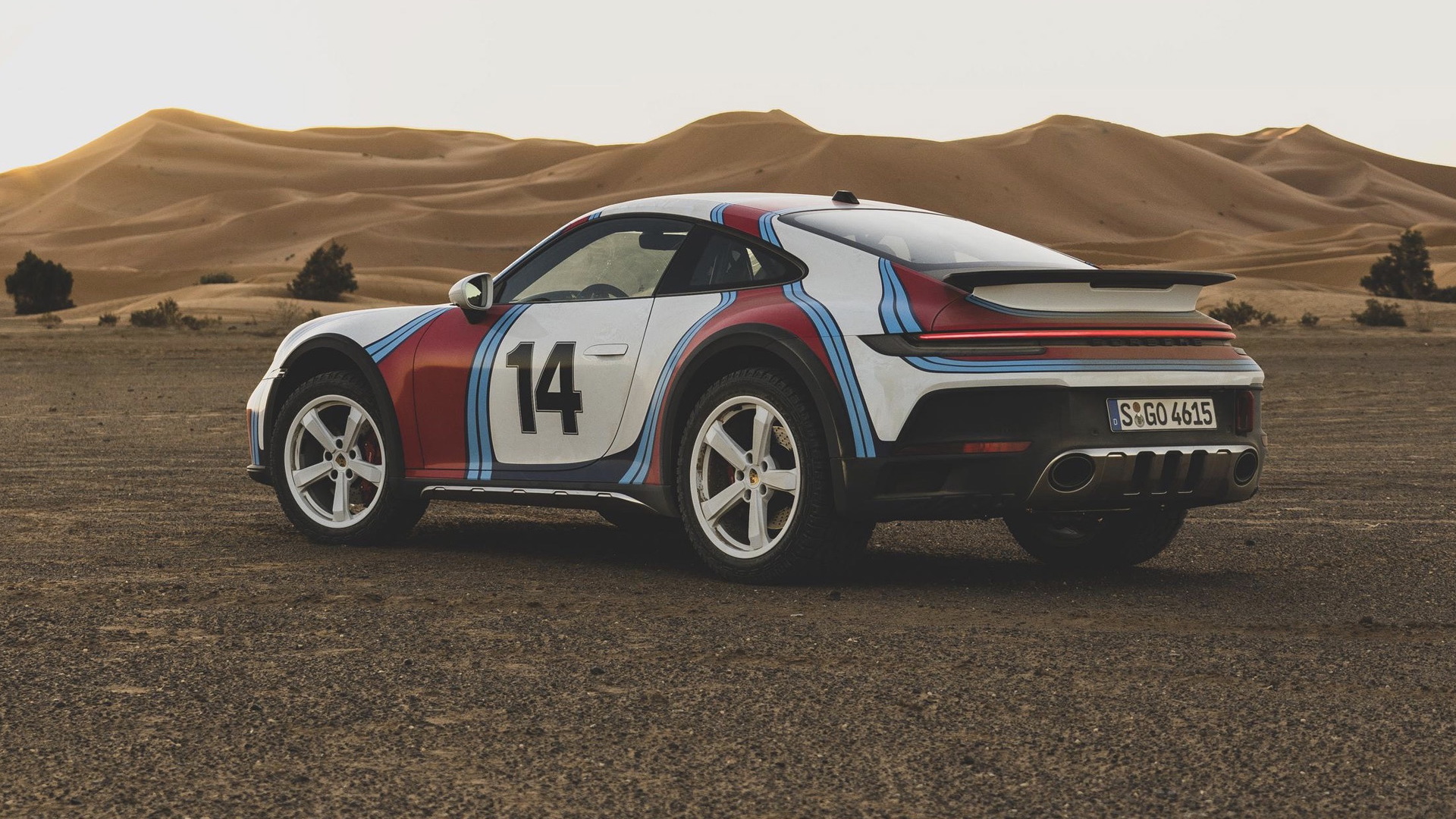 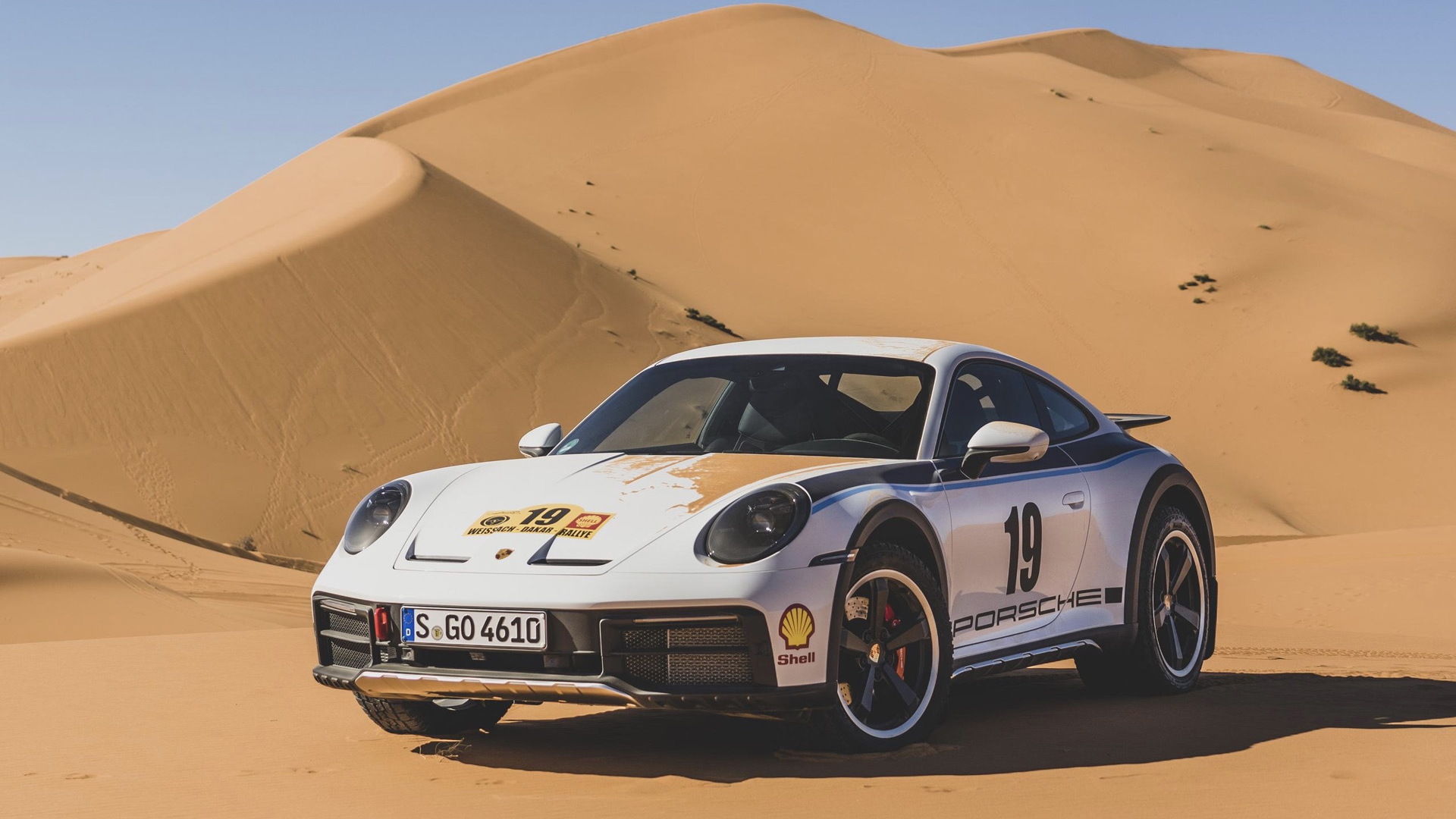 Porsche is offering buyers of the 2023 911 Dakar the chance to dress up their rugged sports cars in one of a handful of liveries inspired by designs used on Porsche rally cars that competed in events like the East African Safari Rally and Dakar Rally in the 1970s and 1980s.

One of these is the Rallye Design Package, which features the popular Rothmans livery worn by the 911-based 953 rally cars that were successful in the Dakar Rally in the 1980s. The Rothmans livery was shown on a 911 Dakar during the car's world debut last November at the 2022 Los Angeles auto show, though it says "Roughroads" instead of the cigarette brand Rothmans. It costs $28,470 on top of the Dakar's $223,450 base price. The steep cost is partially due to the elaborate paint process the livery's application requires.

However, Porsche on Tuesday showed off three other liveries that are available as wraps, and as a result cost a fraction of what the Roughroads livery costs. These three reprise the look of Porsche's entrants in the 1971, 1974, and 1978 East African Safari Rallies.

The Rallye 1971 wrap mimics the look of a 911 S that finished fifth in the 1971 rally, thanks to the efforts of Sobiesław Zasada and Marian Bień. The wrap, which features simple black circles containing the racing number 19, plus a black hood, costs 4,165 euros (approximately $4,470).

The Rallye 1974 wrap features a design inspired by the 911 Carrera 2.7 RS entered in the 1974 rally, with Swedish rally champion Björn Waldegård behind the wheel, together with co-driver Hans Thorszelius. Though they led much of the race, a damaged wishbone late in the event caused them to finish second overall. The wrap inspired by their car also features the racing number 19, plus blue and black stripes. It also costs 4,165 euros.

The final Rallye 1978 wrap features a design inspired by another car fielded by Waldegård in the East African Safari Rally, this time a 911 SC Group 4 rally car built for the 1978 event. He once again suffered damage to his car and ended the event in fourth place. His car featured the famous colors of sponsor Martini, though again, the Martini name is not used on the wrap. Adding this wrap will cost 5,950 euros ($6,385).

The wraps are available via the Porsche Exclusive Manufaktur personalization department. The Rallye 1971 and Rallye 1974 wraps can also be ordered post sale via Porsche Tequipment at Porsche Centers.